Outdoor / Bikes / Beauty of the slowride: One man’s year-long cycling adventure around the world 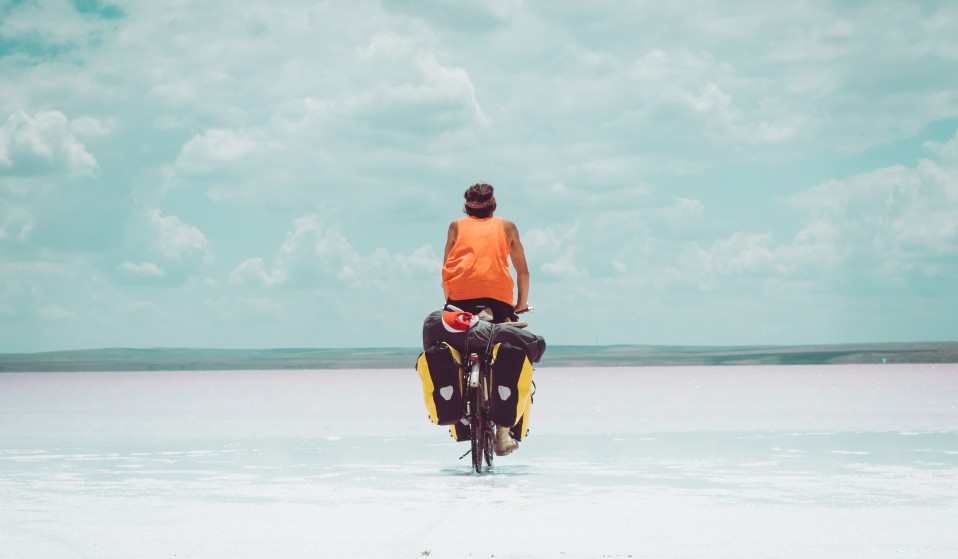 Martijn Doolaard said goodbye to the daily grind to cycle across the world: a life-changing journey that would take him from Amsterdam to Singapore.

Martijn Doolaard said goodbye to the daily grind, leaving behind the repetitive routines to cycle across the world on cross-continental journey: a biped adventure that would take him from Amsterdam to Singapore. His book, One Year on a Bike, speaks to the beauty of slow travel, changing landscapes, and the education of travelling. Here's the preface to his story.

I’ve never been away from home longer than a month. All of my previous trips were more or less planned. I love to spend time in the outdoors, reconnecting with nature without the distractions of daily life. It opens the senses and triggers the mind. Why is it that we can endlessly stare into a campfire without getting bored? Is the pureness of the wilderness always experienced as if for the first time, or does it create a sense of belonging to a place we originally came from?

Certainly we are not made for sitting in offices five days a week. Although my work as a designer and filmmaker is mostly done sitting behind a desk, I try to reduce this as much as possible. Life has so much more to offer. Why are the most vivid memories in our lives from vacations and travel? When I open old photo albums at my parents’ house, the pictures were almost always taken during a vacation. When we travel, we open up. We learn, we absorb, we get amazed. So why then do people travel so little? Is it for financial reasons? Are we stuck too firmly in our daily routines?

Ever since I quit my job at a design agency in 2010 and started freelancing, I’ve felt more in control of my own life. I’ve found I can focus more on the things I find important and manage my own agenda. I started to travel more. I made city trips but went mostly to remote natural areas. My favourite countries in Europe are probably Norway and Iceland. With the traveling came photography. I need to create. It’s what drives me in life. Whether it’s designing a beer brand, directing a music video, writing music, or shooting stills in nature, photography urges me to reach that mountain top and to capture the sunrise in the most beautiful way and not leave until I’ve seen the best part of it.

A while ago I was visiting Pulpit Rock in Norway with a friend. It’s a giant boulder rising above the Lysefjord with a 600-m drop below it. We were going to spend the night there, and while looking for a place to pitch our tent my friend pointed at a nice spot out of the wind on a flat piece of grass. I said, “No, we’re going to sleep right on the edge of the cliff. We’re here for the thrill, not for a decent night of sleep.” I want to zip open my tent in the morning and rub my eyes with the best view possible. This has always been my criteria when I’m camping out.

Traveling to a destination in a certain time frame is how most people travel. I was wondering what it would be like to leave home without much more than a bike and some camping gear for an unlimited amount of time. No route, no planning, no end goal. Live by the day and travel for the sake of traveling. A year before this trip I started my blog Espiritu-libre.com to share photos and stories from my adventures. I love to escape the city and discover the beauty of nature in remote landscapes. The most beautiful places are often the hardest to reach, so it becomes a sport to discover them. It gives an extra reason to camp out on the top of a hill or deep in a scenic valley.

So why on a bike? During previous road trips I saw them pass me by: people on heavily packed bicycles, riding through sun, snow and rain. From the comfort of my car I always thought they were crazy. But after reading an article about two German twin brothers cycling from Berlin to Shanghai, I started dreaming about traveling by bike. It wasn’t until October 2014 that I rented a bike during my stay in Barcelona to explore the city. Normally I take public transport and walk a lot in cities abroad, but a bike made exploring so much more flexible.

I started to think about the idea of traveling by bicycle. The freedom, the simplicity, the open road. It’s not so much the cycling itself that draws me but the bigger picture. Always going forward, never turning back. If we look at our daily lives, we live in circles. We go to work, we come back from work. We go to school during the week and we have quality time during the weekends. We go on vacation and we come back home after a week or two. There is nothing wrong with that, but I needed to break that pattern. A new perspective every day. No circles but a straight line: forward.

I wanted to travel slower and see more. A bike would be the perfect vehicle for it. While others would say that traveling faster would bring you to more destinations, I believed that in between two destinations there are 20 more to explore. I searched the web for the kinds of bikes people use, what sort of bags, lightweight gear, itineraries, etc. After a sleepless night spent reading blogs and travel diaries, there was no turning back. When I returned from Barcelona, I immediately went and bought a Surly Long Haul Trucker.

I bought panniers and camping gear, and after only three weeks I left Amsterdam again for a try-out trip to the Swiss Alps. Winter had just begun. It wasn’t that I particularly wanted to cycle in winter; I was just too excited to wait for summer. The goal was to cycle into the mountains until I got stuck in the snow and then go back by train. I didn’t get stuck in the snow but made it to the centre of the Alps in Andermatt in 16 days. It was an incredibly powerful experience to stand on this high point and look back over the mountains and imagine my home invisible and far away behind the horizon. I was totally sold on the idea of a challenging bicycle trip.

That winter I took on a lot of jobs to build up a travel budget. I didn’t tell many people about my plans—only my family and two or three of my best friends. I told my co-workers I wasn’t available for the coming months, without telling them the reason why. For me, this trip was about freedom and the unexpected. Not telling people of my plan contributed to that. I didn’t want people to ask questions or have expectations. I had a lot of questions myself, but I knew that they would be answered along the way. I asked three friends to meet for a drink. I told them I was going to leave the next day. No farewells, no goodbye party, nothing of the sort.

I had said goodbye to my family a week before. At the Scheepvaartmuseum in Amsterdam I asked a tourist to take a picture of me, which I posted on Facebook, saying that I was going to cycle to China. It seemed a ridiculous idea. People reacted both excitedly and sceptically. What was I going to do in China? I had no idea. I wanted to be on the road, and there was a lot of road between Amsterdam and China.

One Year on a Bike is published by Gestalten. Grab a copy now.

Linkedin
RELATED ARTICLES
OTHER ARTICLES
In her new book, the author explores the country’s housing crisis in human terms and calls for radical action to address a broken system.
50 years since its inception, and the campaign calling for recognition that capitalism depends on domestic labour is as pertinent as ever.
Over a dozen Stop Deportation activists locked themselves to each other outside a detention centre to prevent coaches taking those due to be on the Rwanda deportation flight from leaving.
Photographer David Hoffman recalls documenting the extreme wealth inequality around Tower Hamlets and Hackney int the 1980s.
A new edition of a seminal book brings together iconic images of the band onstage in their full glory and backstage in moments of unguarded camaraderie.
The author discusses the all-consuming nature of heartbreak, and turning the experience into an incisive exploration of love and loss.