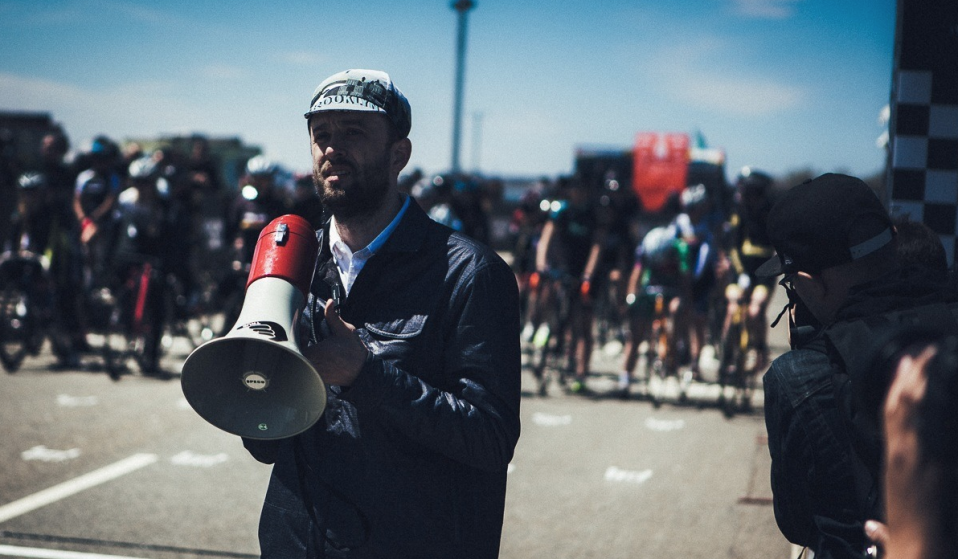 We catch up with David Trimble, founder of Brooklyn-born race The Red Hook Crit, to find out why his high-octane wheel-around is gaining traction all over the world.

We catch up with David Trimble, founder of Brooklyn-born race The Red Hook Crit, to find out why his high-octane wheel-around is gaining traction all over the world.

“The first event we had maybe 15 people racing and there might have been another 15 watching, mostly family members and friends. We started the race outside of my apartment at about 11pm in Red Hook, Brooklyn. I was having a birthday party and I wanted to hold a bike race for fun. Now we have over 10,000 spectators at each event, it’s crazy.”

David Trimble, the Red Hook Crit founder and organiser, is explaining the somewhat humble beginnings of his hugely popular underground race series. He’s just flown in from New York to begin preparations for its inaugural London leg, which will see around 250 riders gather in London’s Greenwich Peninsula to compete in a high-speed, sprint-style road race. Relaxed, if not a little jet-lagged, he’s drinking an espresso, camera in hand, having earlier shot the course to get a feel for the route.

“The funny thing is that we had no ambitions to take the race anywhere, it was really just a ride for my friends. But at the first race some people made videos and took photos and there was a real word of mouth around it,” he continues. “The next year it was still pretty low-key, but by the third year we had 500-600 people watching and lots of racers turning up. It was pretty intense, we had no permits for anything and were just occupying the streets. There were volunteers holding up buses, cars would get on the course and people would have to jump in front to stop them from hitting riders. Cops were there, they didn’t want to shut us down but it was getting close. I knew at that point it was getting too big for an underground event.”

So the following year David took Red Hook legit. He went to City Hall for the necessary paperwork, found some paying sponsors to cover the race costs and organised his friends into a crew to oversee the organisation of the event. The subsequent Crit proved to be an even bigger success, which allowed him to take the Red Hook further afield, with international stopovers in Milan and Barcelona.

“I think the reason it’s taken off abroad, is the same reason as in Brooklyn,” David offers by way of reasoning for the Crit’s unprecedented growth. “It’s a very simple and easy to understand format that appeals not just to cyclists, but anybody wanting to see a spectacle. The course is about a kilometre and a quarter with lots of corners, and lots of very quick, short laps, while the riders are on track bikes, which have no brakes. It’s fast, dynamic, and incredibly competitive.”

Having secured a global partnership deal with Rockstar Games that has allowed the race to become a full-blown competitive series, RHC is attracting a mixture of professional and high-level amateur riders from across the globe. It seems though, with 30 nationalities currently participating, that the riders to watch won’t be coming from David’s homeland despite its North American origins.

“I know right, the US dominance has fallen off slightly in the past couple of years,” he says. “We had an Italian named Ivan Ravaioli just win in Brooklyn and the guy is extremely strong, he’s actually the first Italian ever to win the Crit. I’d say he’s the favourite in London, but he’s also now marked so people are going to be watching out for him. Then on the women’s side there’s Ainara Elbusto Arteaga from Spain and Fleur Faure from France who came in first and second respectively at Brooklyn. They’re both super fast and amazing riders, and will do really well in London also.”

With David about to head over to meet with the Peninsula’s developers about taking the route through a building site on the Thames Path, our final question then is what we should expect in the London Crit? “We’re looking to bring something completely new,” he says. “When you see what’s going on in London, all the energy people have for cycling, and then see what we’re going to be doing, you’ll see that there’s nothing like it. It really is unique.”

Reddit
OTHER ARTICLES
A childhood in ballet, surprise later life decisions and injury have all helped cycle racer Kelli Samuelson push women's cycling to the next level.
No summer? No problem.
Bamboo bikes hand built in Hackney.