Outdoor / Bikes / The Big Race For Brooklyn: Inside the Red Hook Crit 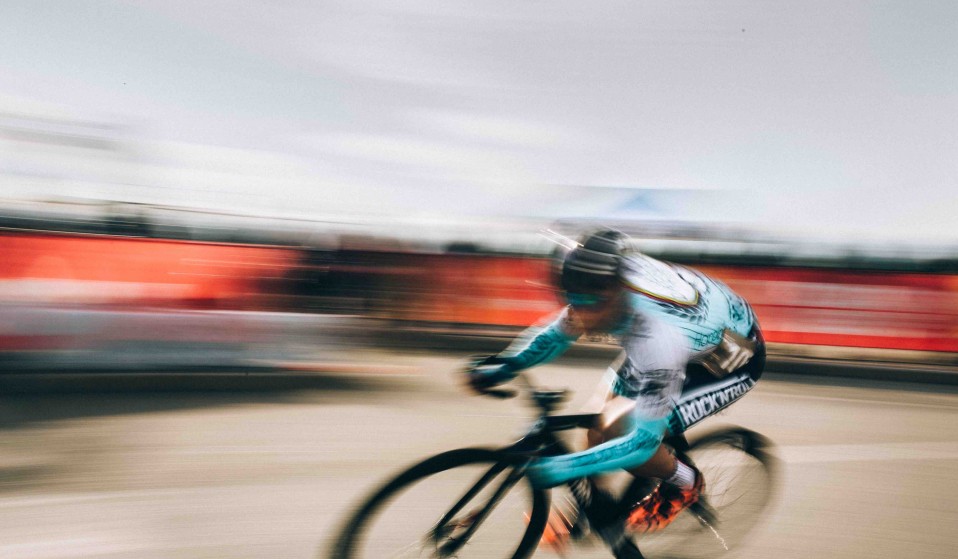 New York's Red Hook Crit – often described as the world’s best urban cycling race – is made up of an eclectic community of competitors, facilitators, and fans. We meet a prize selection, to find out what makes it such an important date in any bike-lover’s calendar.

New York's Red Hook Crit – often described as the world’s best urban cycling race – is made up of an eclectic community of competitors, facilitators, and fans.

Here, in the latest post from 'Lines Through The City' – a collection of skateboarding and cycling stories produced by Huck in collaboration with Levi's® Skateboarding™ – we meet a prize selection in the event’s eighth year, to find out what makes it such an important date in any bike-lover’s calendar.

In eight hours time, there will be a crash here at the Red Hook Crit track race. First, a pace motorcycle will stall in the middle of a track, then one of 85 racers – riding without breaks at 30 miles per hour – will careen into the back of that motorcycle before dozens of others will join the pile-up, tumbling on top of it, one by one, in total chaos. 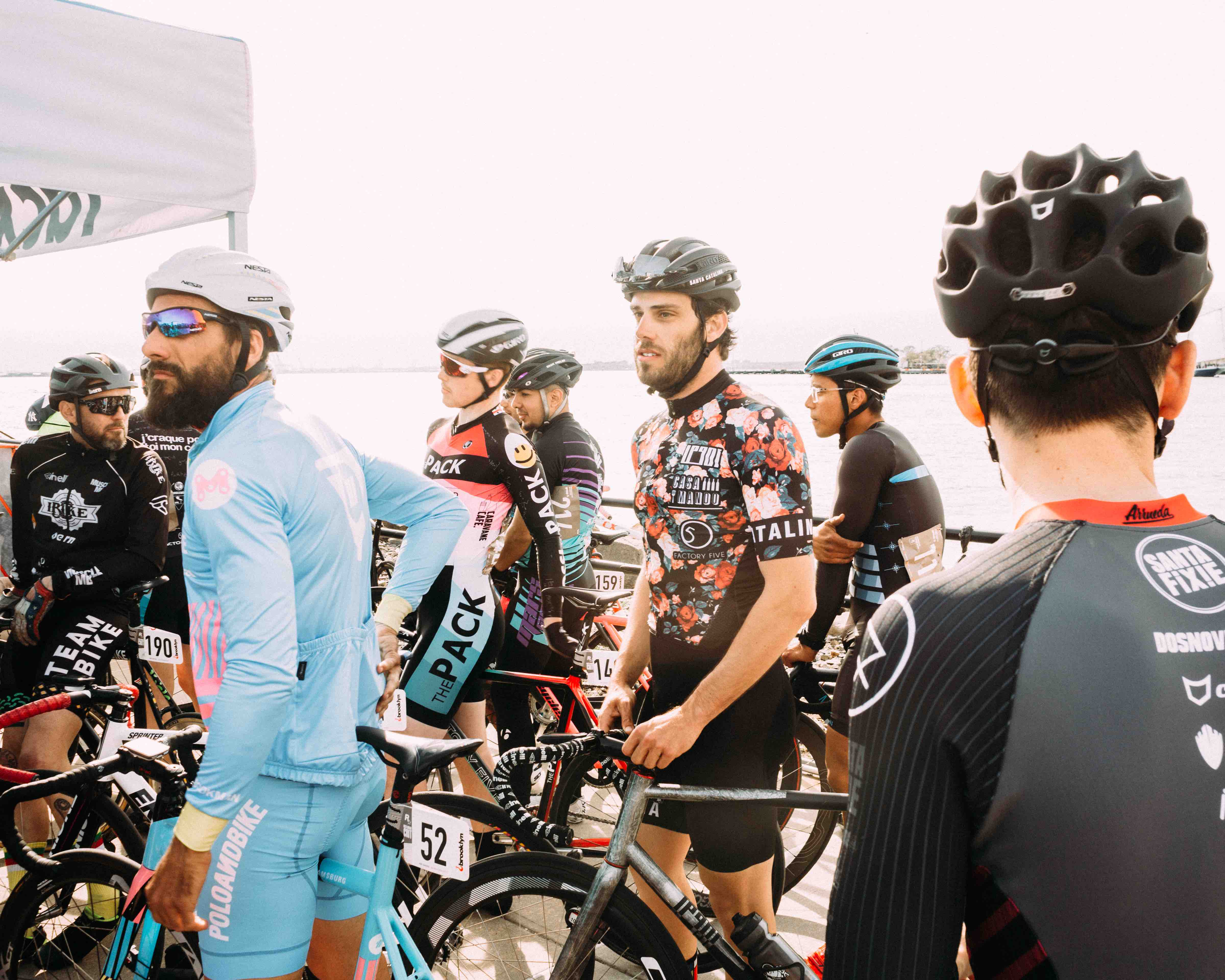 But then the Red Hook Crit – an international spectacle (somewhere between a professional track race and DIY messenger alleycat race) also taking place in London, Barcelona and Milan – is no ordinary bike event. Right now, in the early afternoon, it’s the idyllic first day of spring and we’re here on the Brooklyn banks of the East River, where David Trimble founded the whole thing eight years ago.

Back then, it was just a 26th birthday party for Trimble on an unsanctioned track. But now the kilometer-long race, full of intimidating hairpin bends, is visited by hundreds of cyclists from all over the world making it one of the most respected events in the game. Fixed-gear racing is brutal in any circumstance, and just making it through the 25 minutes of qualifying is enough of a challenge. If slowing down burns just as much as speeding up, there’s no respite. Corners are taken at improbable speeds and crashes seem to be perpetually inevitable. 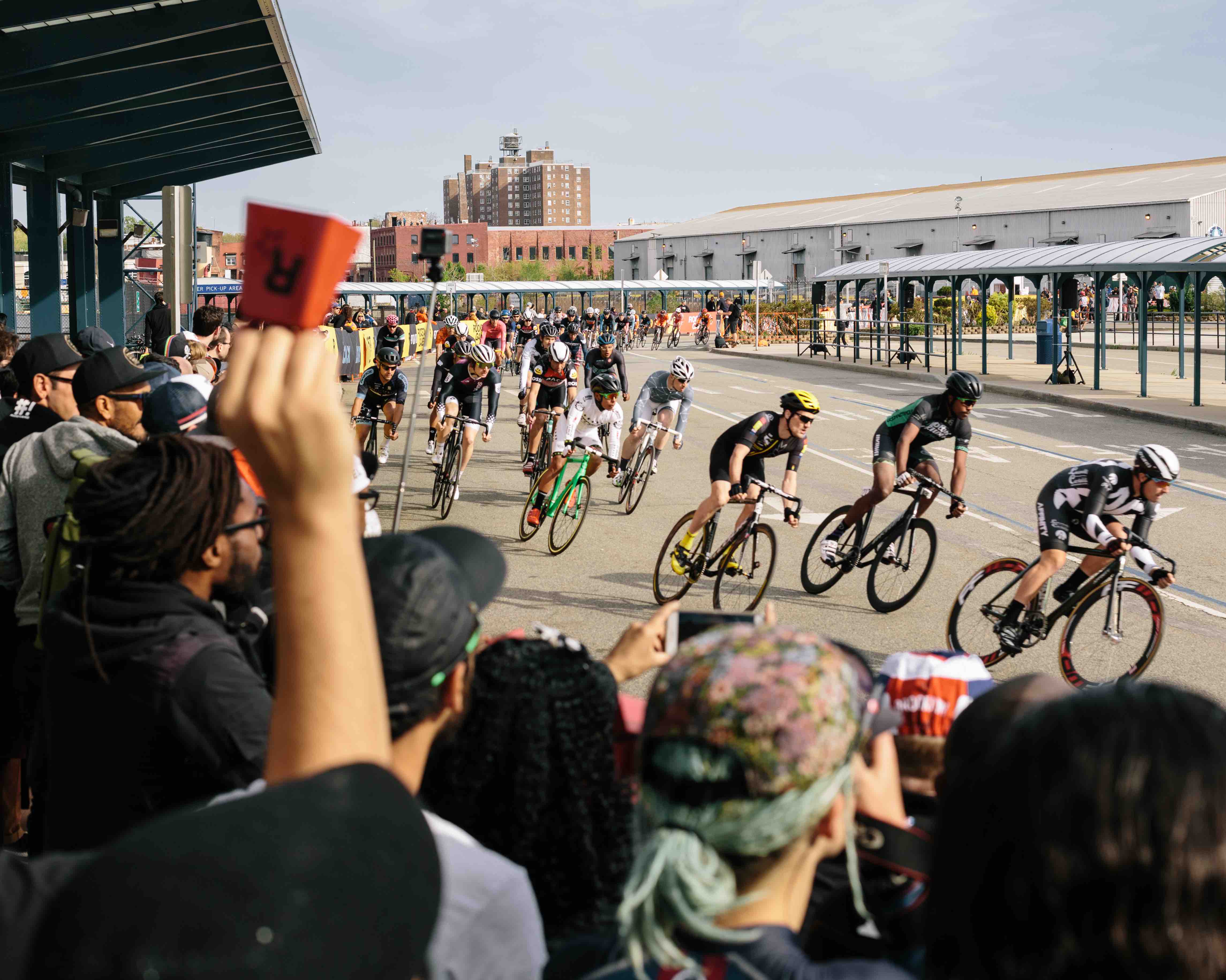 But even on the track – 15 to 20 minutes into the struggle – the riders are flashing smiles. Thee Red Hook Crit is a community event for the global fixed-gear family, free from pompous superiority. Everyone here has a bike whether or not they’re riding and there are just as many kids holding ice cream cones as there are granddads wheeling fixies. Thee racers feel it too, no matter how terrifying the pace might be.

We spoke to some of the people who make the race what it is, from the laid-back spectators showing off their rides to the founder himself. 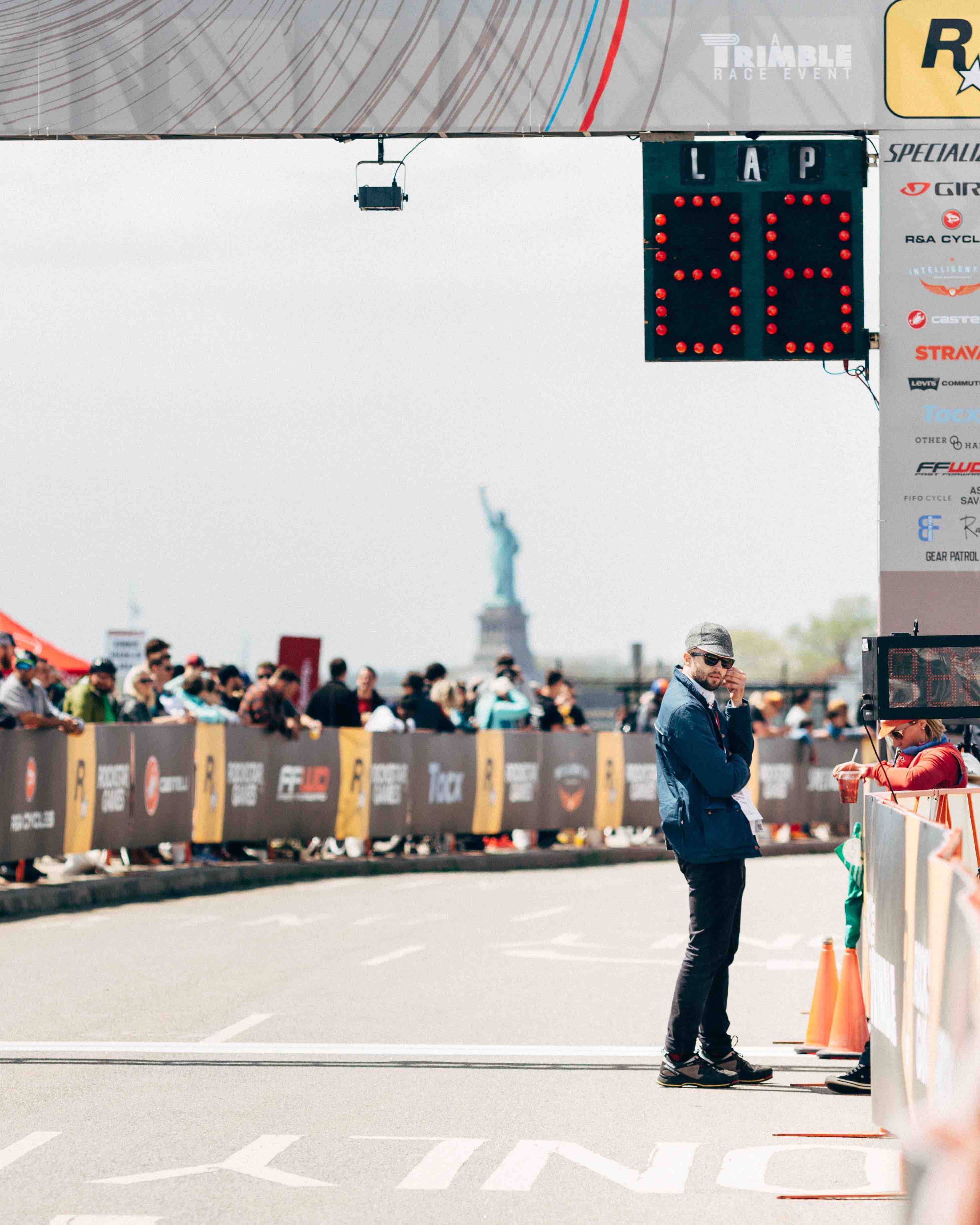 How’s the day feeling?
Pretty good. We’ve had a couple of crashes but it’s no big deal. [Trimble was interviewed before the evening’s major crash.] And everyone’s in good spirits; it’s the first race of the year, they’re all ready to go. It’s cool to see everyone’s friends and family hanging out and the big crowds will come through when the sun goes down. The turnout’s good from the riders, too. We’ve got them coming in from forty different countries, really from all over the world. That’s pretty awesome.

You’re on the mic before every race, getting the riders in check. Seems like you’re having fun with it.
I’ll make the announcements to the riders, they know me. I’m just trying to get into their heads what the rules are. We just want them to ride as safe as possible. Even if it’s raining, these guys can take it, though.

As somebody who’s raced it before and taken it round the world, are you accustomed to how scary and fast it is yet?
Oh man, no. No, it’s definitely still terrifying. But that’s part of the appeal. People like danger, they like speed. If it was easy, we wouldn’t have all this. 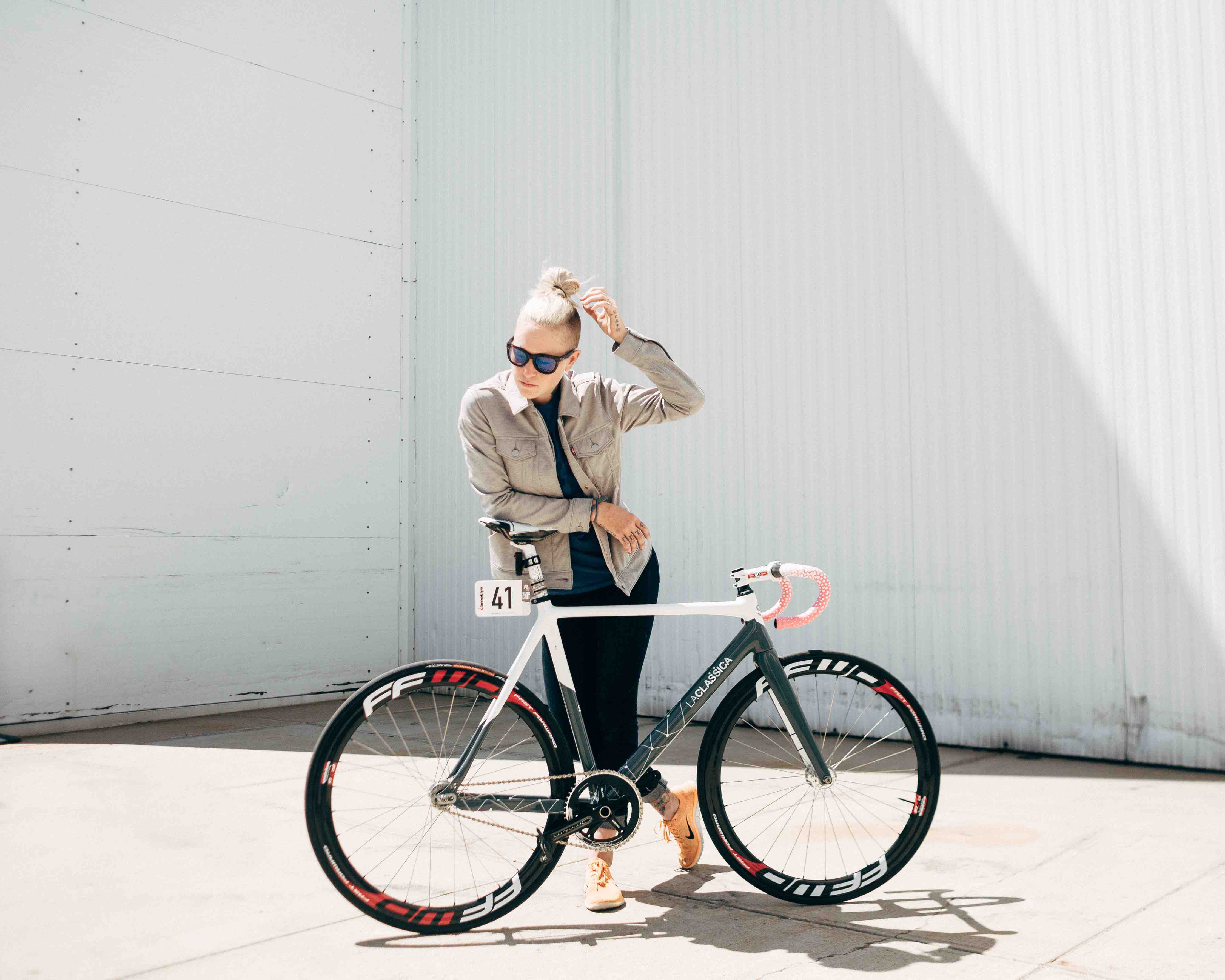 How do you prepare for something like the Red Hook Crit?
I race a full road season and the team that I own focuses on criteriums anyway, but this is a little different. There’s a bigger crowd, more press, but I really enjoy it. I like talking to people, I like being out there and showing people – especially other girls – that it doesn’t matter, you can just go race a bikve fun.

What makes Red Hook so special?
I’ve done Red Hook eight times now. I did it before there was a women’s race, which was terrifying. It was one of those things that I’d always wanted to do. I started racing bikes, doing a lot of races and just riding my track bike in the city. I was never a messenger but always had friends that were and we’d just ride around. When I got into racing, Red Hook was just this unicorn of races that only 100 people got into. When it grew, I came down one year and did it. Obviously I didn’t qualify. There were 200 guys and there were three girls, I think. But it was a lot of fun and we had a good time. I met some of my closest friends. So coming back is a lot more like a family reunion than it is a race for me, really. 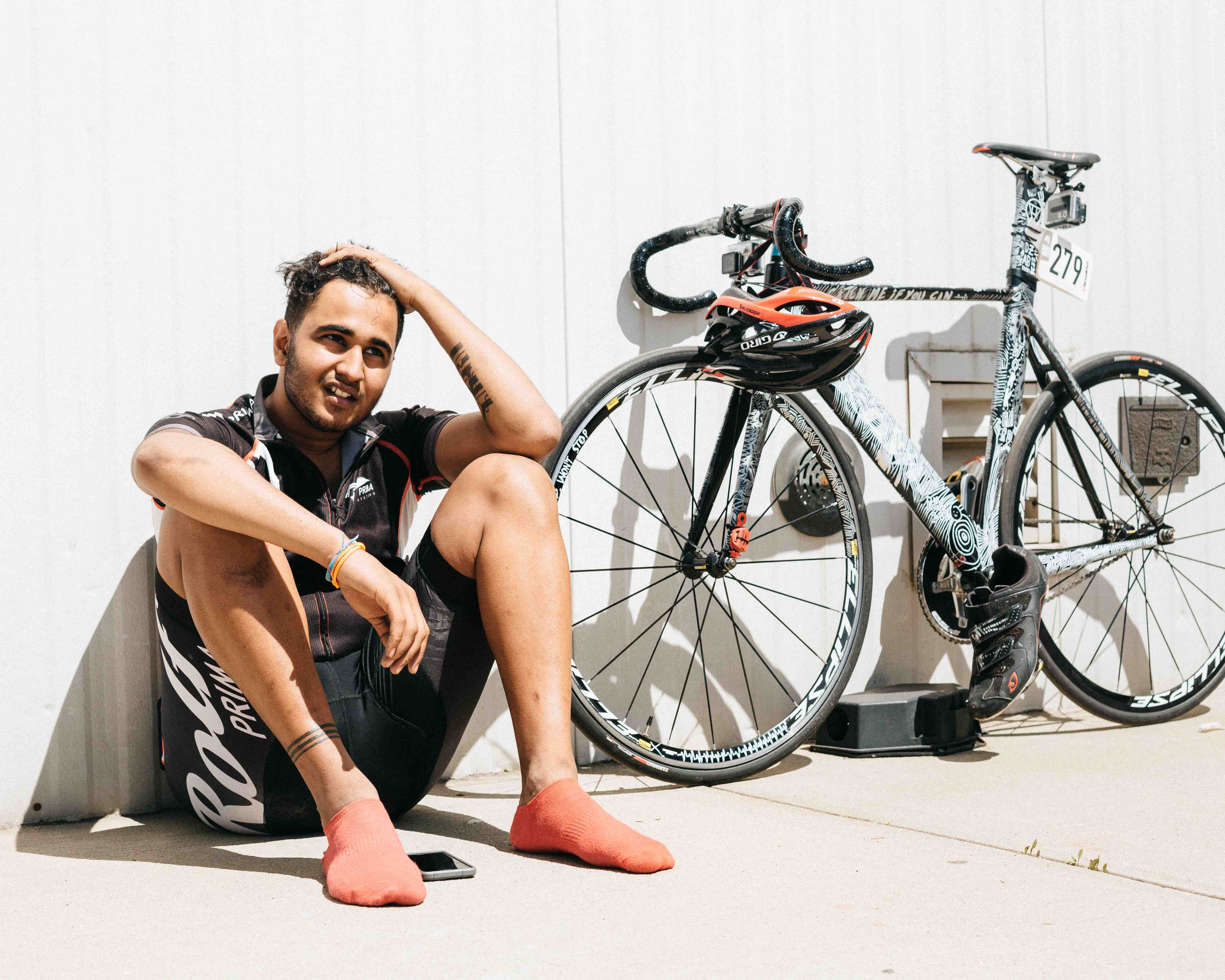 How many times have you raced Red Hook?
This is my first time doing this crit. I’ve done other crits and then I’ve just been racing on the velodrome mostly in Queens, doing alleycats, stuff like that.

How long have you been riding?
I used to be a big fatty so when I was about 13, my parents forced me to get on a bike and then little by little I just made my way here.

What draws you into the Red Hook race?
You come here, you just show up, and even if you don’t have a bike, you could know absolutely no one and still make friends. No one’s a dick here. I’ve been to the Tour de France and everyone had this nasty vibe. Everyone was like, ‘You don’t have a $10,000 bike.’ I mean, there are guys here with $120 bikes and then there are guys with $3,000 bikes but we’re all cyclists. It’s one blood; it’s a community. We’re brothers and sisters.

What’re you hoping for results-wise?
I’m hoping I can qualify for the main race, but I crashed in qualifying. Just being here, just finishing qualifying – it’s enough just keeping up with some of these guys. 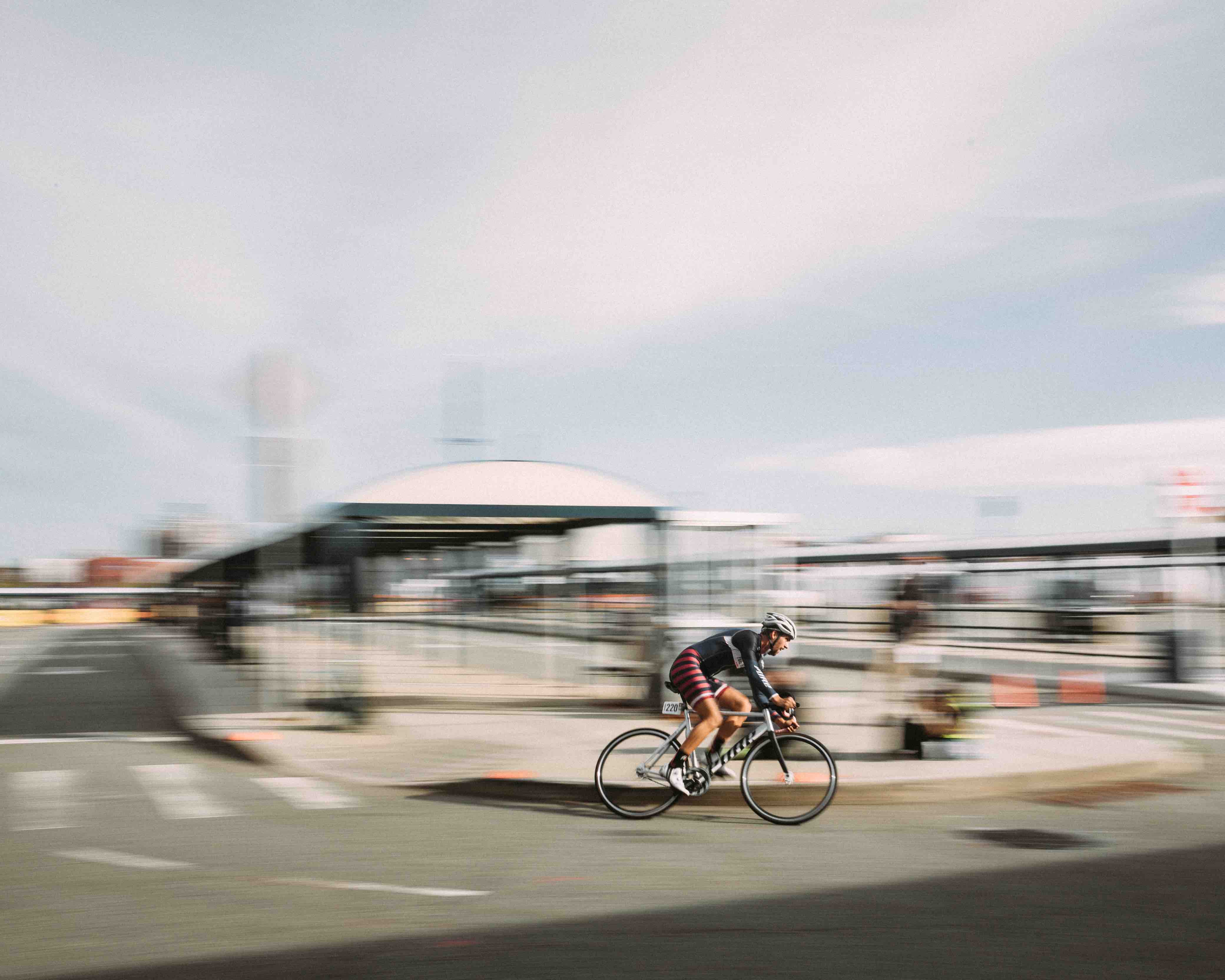 How does the course feel when you’re going through the qualifying heats?
It’s interesting. The two hairpins, once you’ve found the line, it’s really flowy and super cool. You can really start cooking it. There are some bits that are super fast. I’m looking forward to running it, too. We’re out here so why not do what we love to do and ride a bike and then get out of your discipline and run it as well? [A 5km running race takes place on the same course.]

I saw the alleycat race you won on the streets of Jakarta at FixedFest 2012. That looked genuinely scary. This race must feel pretty relaxed in comparison.
It kinda is. That was one of the craziest cities to ride a brakeless track bike in. They were nuts, but by the end of it you realize that over there, there’s a flow to the track and if you start looking, there’s not really that many car accidents. People just understand how to exist together in the same space.

What’s so special about Red Hook?
This whole fixed crit phenomenon that David Trimble has pushed with Red Hook has really brought us all together as a global community. Not only do we get a chance to go race in London for Red Hook, we can extend our trips and do a fixed crit every single weekend. It’s creating a bigger family, a bigger sense of community. That’s what this whole thing does – it creates a really awesome brotherhood and sisterhood of traveling bibs, just because of racing these brakeless track bikes. 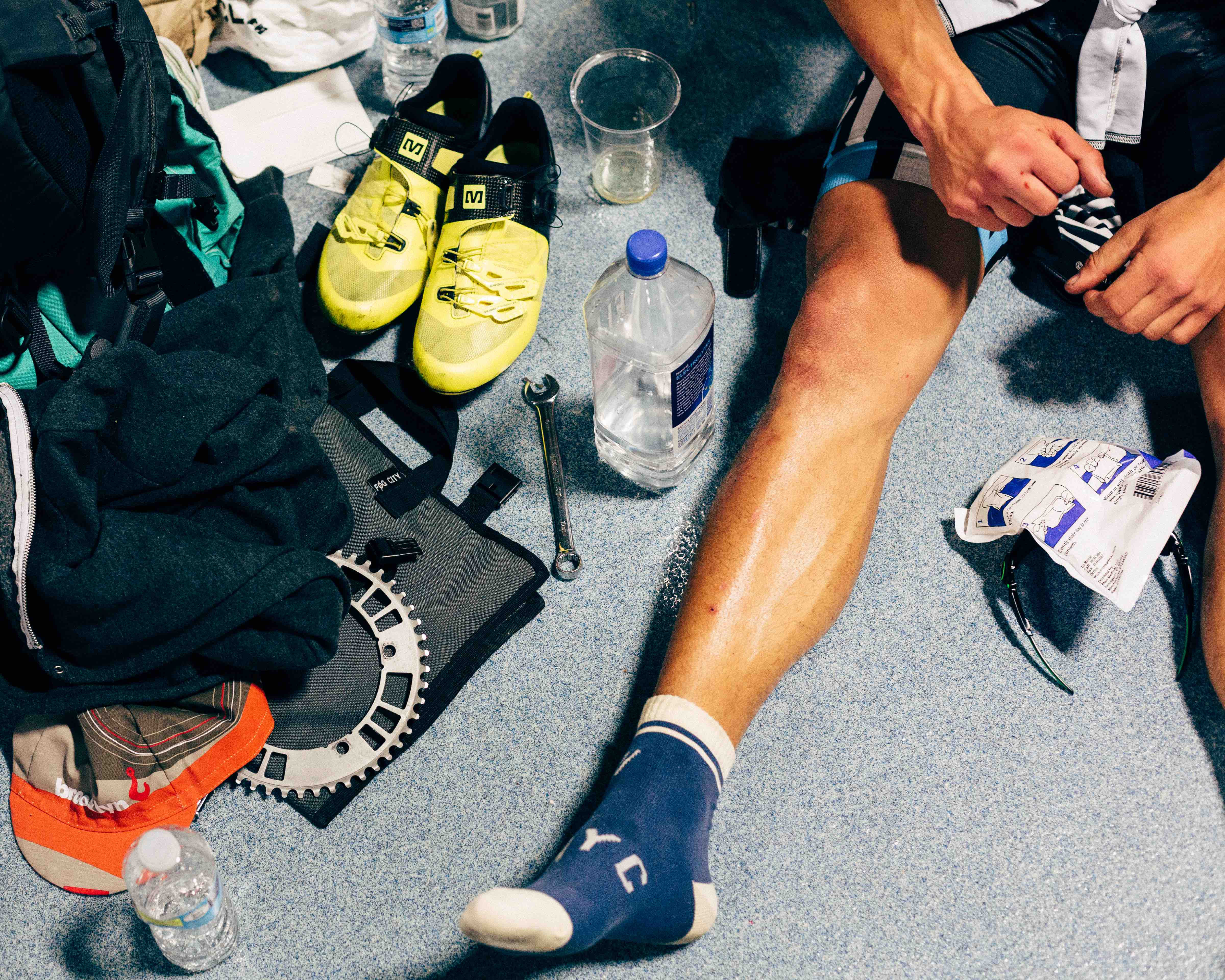 So what’s the Uptown Riders?
Tito: It’s just a fun crew. Ariel: There’s like twenty of us, but I don’t know where everyone went.

You guys down here every year?
Tito: Every year since we started the crew three years ago.

What’s the vibe like?
Ariel: Beers. Tito: Beers Alexis: And some of the bikes are cool, too.

You guys competing?
Ariel: No, no. One of the guys is gonna participate, one of our guys. He’s gonna lose. He’s losing.
Tito: It’s being here that counts, right?

Is it scary riding around New York with no brakes?
Tito: It is, but you get used to it.
Ariel: Yeah, you can’t be afraid, man.
Alexis: It’s scary, don’t listen to them.
Ariel: He’s fine. He’s just talking shit. 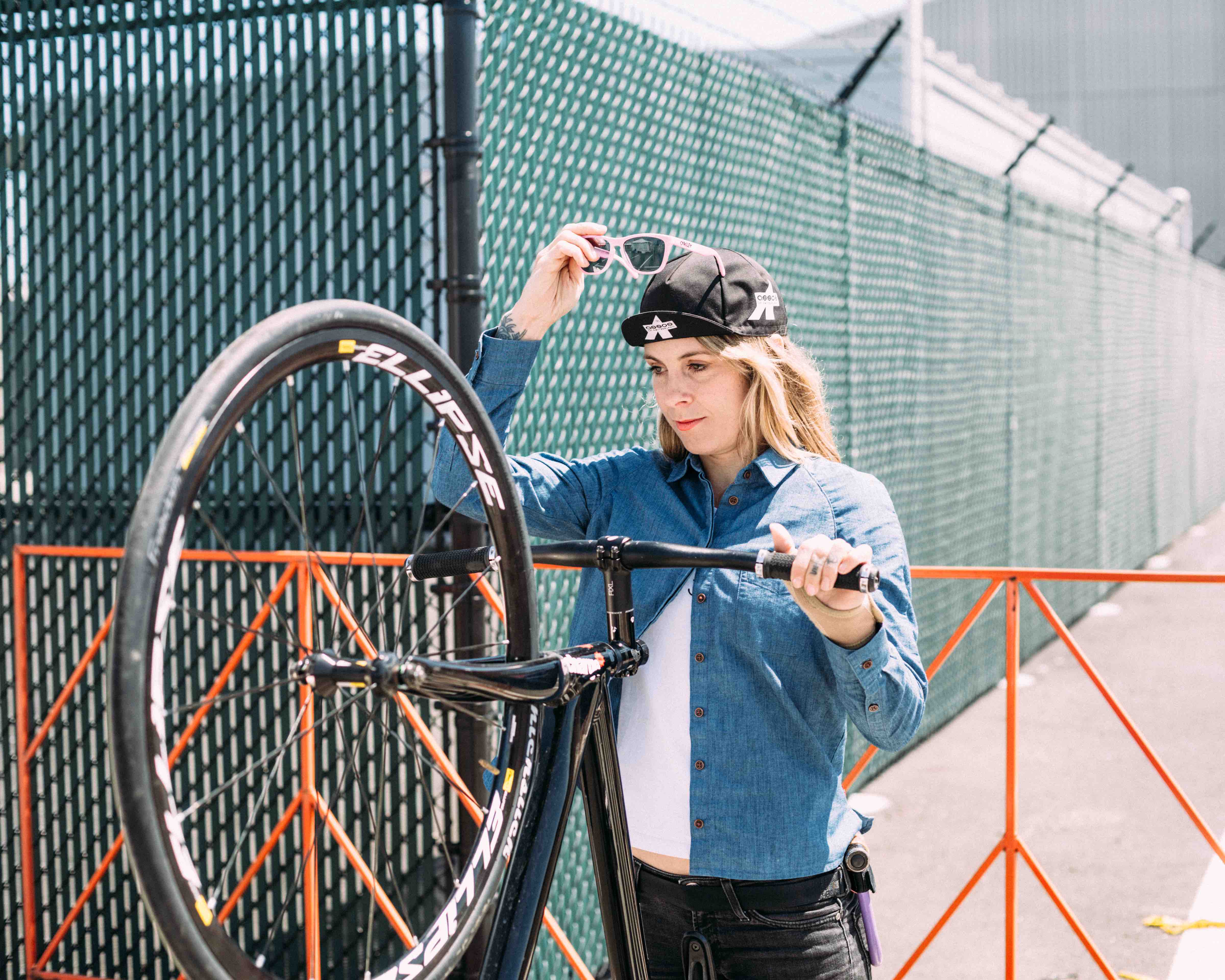 How come you’re not racing today?
A couple of weeks ago I broke a few bones in my hand. I was doing a mountain bike race and I had a really bad crash. I found out a few days later that I’d broken my thumb in three places. That was annoying.

Your husband’s still in the race today – is it frustrating watching him race and not being able to control it?
Yeah, totally. I want it so bad and I can see the tactics that everyone else has. Like, you’re better off sitting behind someone and taking advantage of the drag effect; you want to be behind someone strong, you can conserve your energy and spring to the line and set a good time. But I could tell he just got stuck at the front and everyone took advantage of him.

It seems like you’re chilling anyway, though.
It’s just really fun. There’s a great community at these races. It’s not like other road races that I’ve done before where the scene’s quite boring or non-existent. With this, the spectators are going wild; all the competitors know each other and there are parties in the evening. My husband and I live in Devon now and these international races are where we catch up with all our friends, even our English friends. We had a few too many beers last night, actually.

I’m sure Dave didn’t though, right?
No, he was fully drinking. He was grumbling this morning. He can sweat it out.

Check out the Levi’s® Commuter™ collection online and at specialty shops worldwide.

Linkedin
RELATED ARTICLES
OTHER ARTICLES
When photographer Lee Kirby stumbled across a bedraggled man in designer clothes, he found himself opening a pandora’s box that would change his life. But for Lee Trosclair, renegade-turned-muse, the story is just beginning.
The writer and publisher shares his experience of getting shit done... without having to make soul-destroying compromises.
Huck's 10th anniversary special celebrates a decade of self-rule - and the outliers who define what it means to be truly independent.