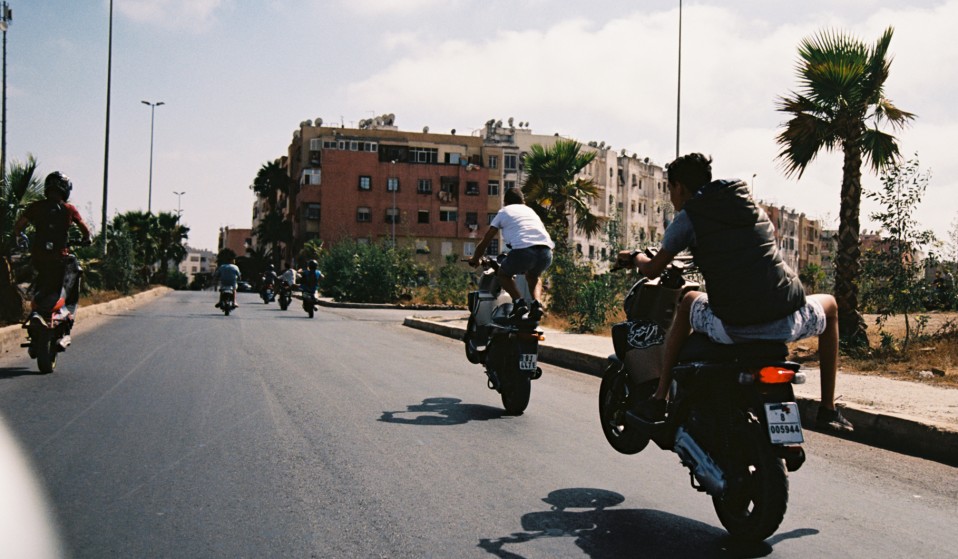 Last year, British filmmaker Jamie Whitby ventured to Morocco to capture the exploits of the Anfa Riders, a ragtag group of young stunteurs who own the roads. Now, they’re the stars of Gengahr’s latest music video.

Last year, British filmmaker Jamie Whitby ventured to Morocco to capture the exploits of the Anfa Riders, a ragtag group of young stunteurs who own the roads. Now, they’re the stars of Gengahr’s latest music video.

On the streets of Casablanca, Morocco, the Anfa Riders are a regular fixture in the frantic, daily cacophony.

A tight-knit collective of teenage stunt bikers that first formed in the summer of 2015, the crew – fronted by founding members Yousef Boukhrais and Aymane Ait Malek – come together en masse to participate in daring moped rideouts, routinely defying the best efforts of local authorities to stop them.

At their most rambunctious, hundreds of members will hit the roads together, hurtling through the city like an organised stampede. Gathering on the outskirts of town, the Riders zip in and out and out of Casablanca traffic, performing wheelies, tricks and stunts with the gleeful theatrics of seasoned performers.

Most of the members began practising tricks on their pedal bikes, before turning their focus to mopeds when they were able to afford one of their own. When they come of age, the Riders – who refer to themselves as ‘stunteurs’ – will eventually graduate onto motorbikes.

“Like any stunteur in Casablanca I started by falling in love with the style, just watching the pros on their sports bikes,” explains Malek. “Day after day, you try to do what they are doing on your bicycle. Then, [as you get older] you move onto scooters.”

“When I’m riding, I feel like I am in my own world,” adds co-founder Boukhrais. “It’s a such an exciting feeling, to feel like you are flying. You forget all of the problems around you.” 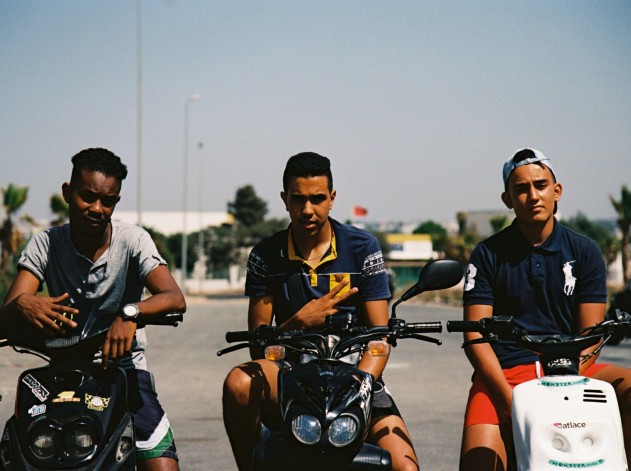 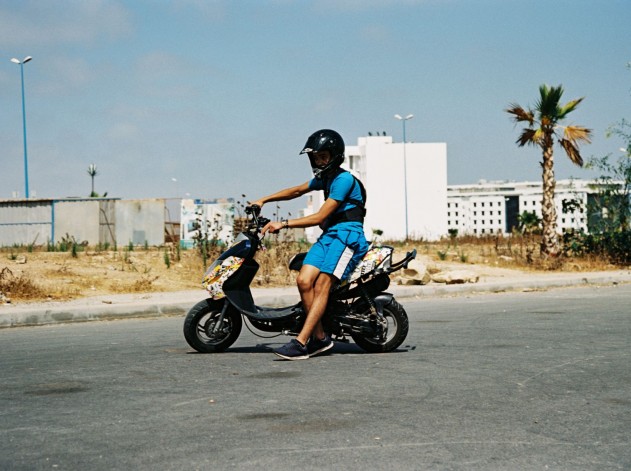 Last year, British filmmaker Jamie Whitby stumbled upon the crew through one of their colourful, self-shot YouTube videos. Captivated by the unity of the young stunteurs and their startling displays of fearlessness, he reached out over Facebook and arranged to fly out to Morocco to spend four days photographing the gang in their home city.

Three months later, Whitby returned to Casablanca: this time, with a crew accompanying him. Over the course of five days, he and his team followed the Riders, filming their collective exploits as they rode around the city, shining a light on the characters that make up the movement. 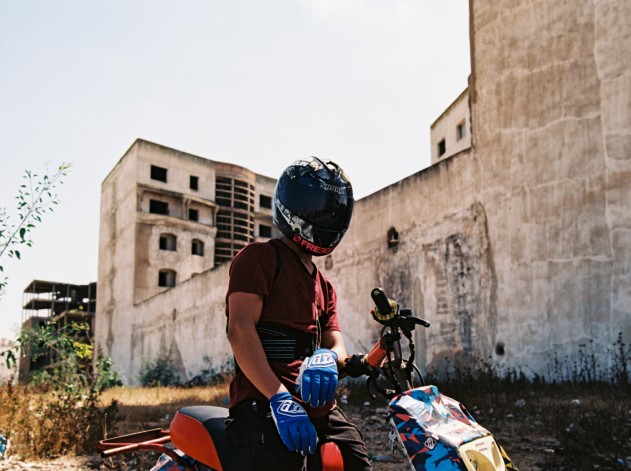 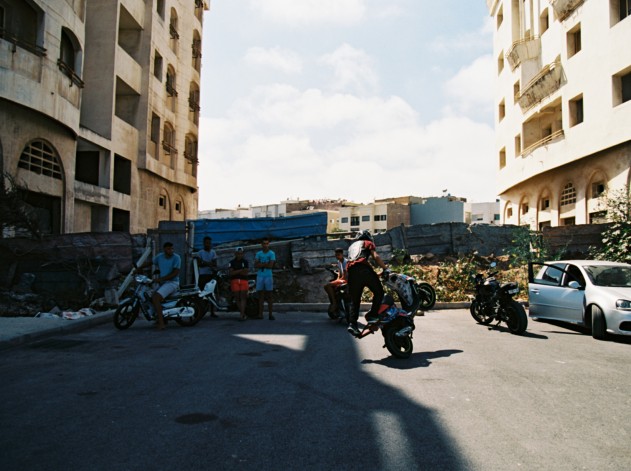 The result of the trip can be seen in the music video for “Before Sunrise”, the third track from Gengahr’s forthcoming second album, Where Wildness Grows. Operating as a celebration of friendship, camaraderie and the weightless freedom of youth, Whitby’s lens captures the daily adventures of the young collective on an intrepid scale.

“It wasn’t until I was out there the second [trip] that I really understood the level of risk that they’re taking,” Whitby says.

“The police confiscate their bikes on sight and fine them pretty heavily, so they mostly gather on the outskirts of the city where there are no police, which means people then come and steal their bikes at knifepoint. And that’s before the accidents.” 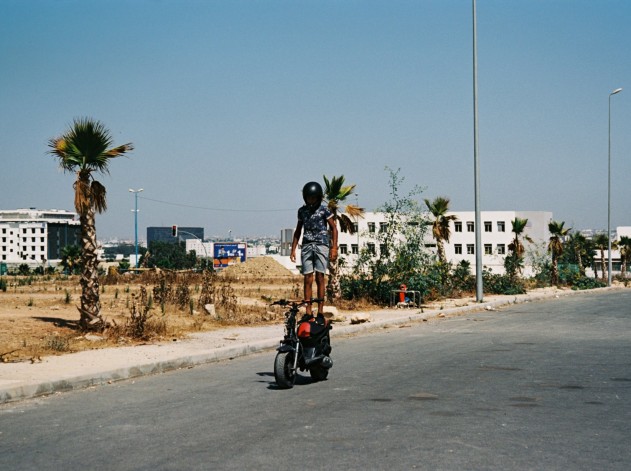 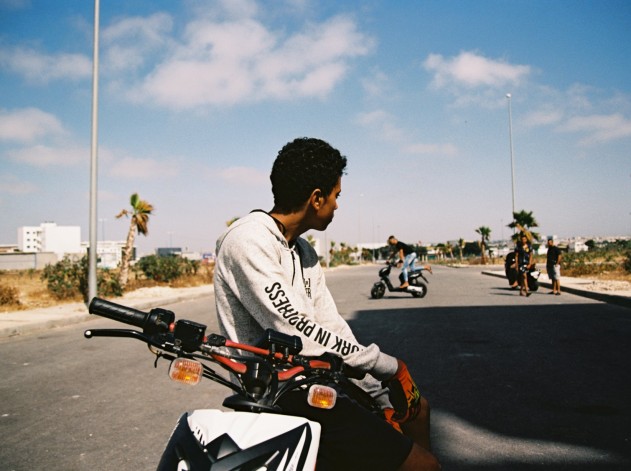 Naturally, the Anfa Riders aren’t easily halted. The young, stalwart squad are growing by the day – and the Gengahr video will only serve to speed things up. For Boukhrais and the rest of the Riders, things have never seemed clearer.

“We face a lot of challenges here, the basic things are not available – like good roads to wheel on, places to train,” Boukhrais continues. “The police don’t accept us as a passionate guys of bikes and that we are doing it from heart, without ever thinking of hurting anybody.”

“But, by the end, we are passioned – and nothing can stop us carrying on and achieving our goals.” 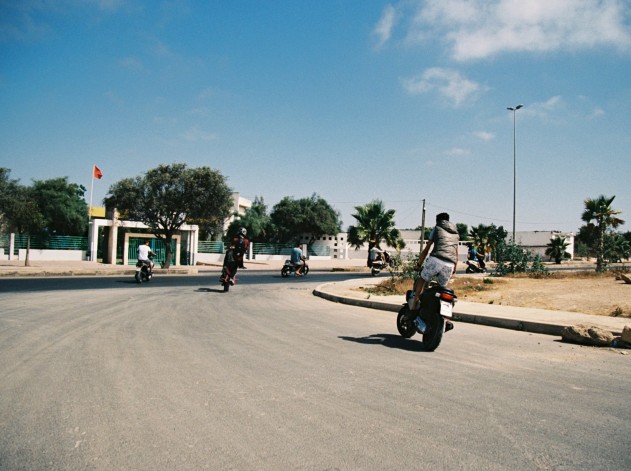 “Before Sunrise” is out now.

See more of Jamie Whitby’s work on his official website.

Linkedin
RELATED ARTICLES
OTHER ARTICLES
The action took place in response to the 200 asylum-seeking children who were placed in hotels run by the Home Office who have gone missing.
Theo McInnes’s photos of the annual event provide an intriguing snapshot of contemporary Britain.
As she gears up for the release of her first book, the 24-year-old climate activist talks standing up to authority and building a more inclusive movement.
Following the release of his debut single, Deyaz talks battling addiction, dealing with his struggles through music, and building a budding music career from his living room.
A recent High Court ruling against the right to wild camp in Dartmoor National Park sparked the largest land protest in history – and campaigners say their fight is not over yet.
At his West Bank restaurant, Fadi Kattan established himself as the voice of modern Palestinian cuisine. Now, he’s bringing his innovative, bold flavours to the UK’s capital.