Outdoor / Bikes / Wheels, Wood and Waves: It’s all about the ride… 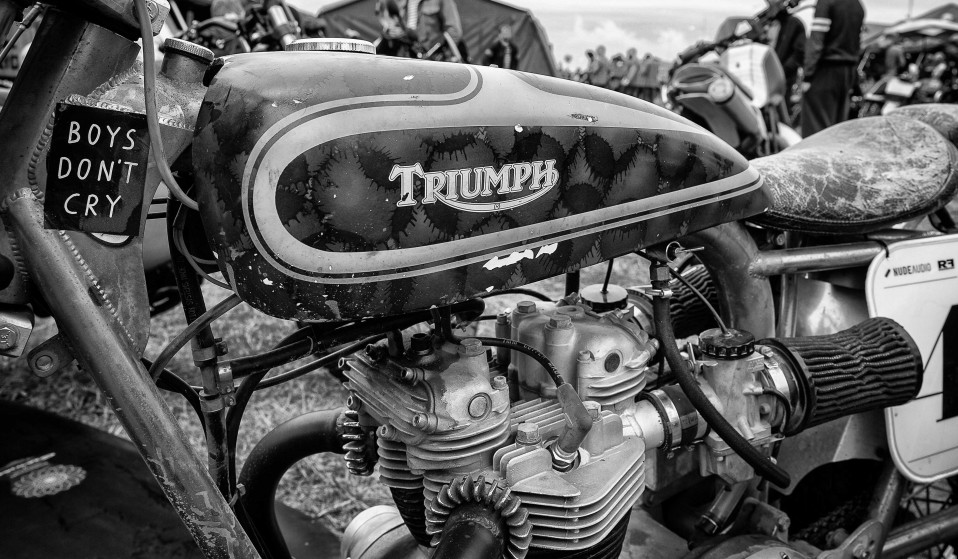 Bike and surf culture have collided and intertwined. It all comes together once a year in the Basque Country — and this year there was a twist of English irreverence.

Bike and surf culture have collided and intertwined. It all comes together once a year in the Basque Country — and in 2017 there was a twist of English irreverence.

Biarritz is booming with the percussive sound of straight-through exhausts. The narrow streets are hemmed in with shuttered dwellings and ochre tiled roofs that funnel the roar.  There are ludicrously sissy-barred shovel heads everywhere. Chopped, bobbed, tracked and caffed out Bonnies, Hondas and Huskies lap the old town, bursting in resonant packs down from the surf side straightaways in Hossegor, and up from the border to the south.

The genteel French Basque capital is popping with the soundtrack and the visual feast that is the fifth edition of Wheels and Waves — the annual coming together of custom bike culture and the surf riding aesthetic, hosted elegantly by the local gentlemen of the Southsiders Motorcycle Club. 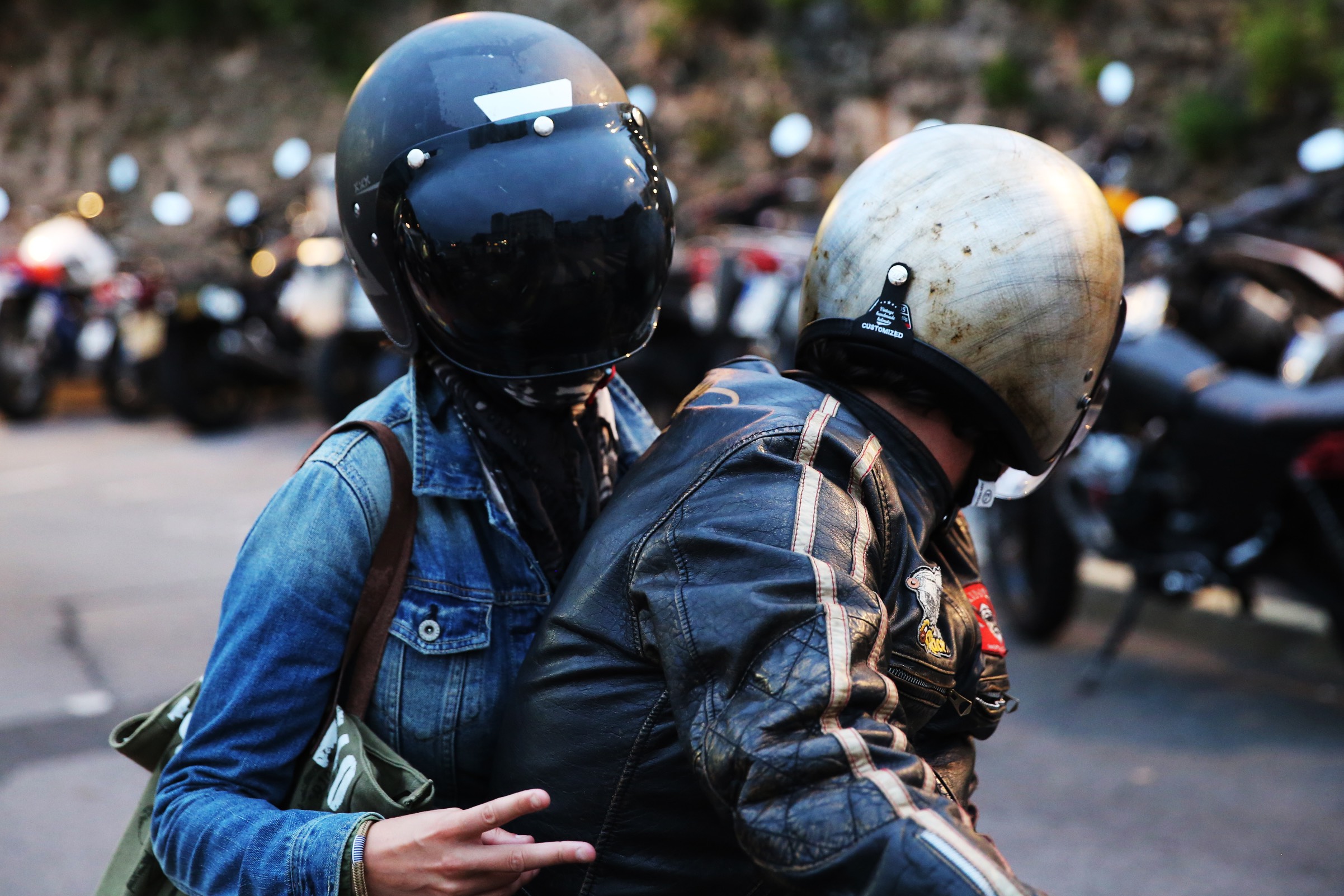 Bringing a distinctly irreverent, very English brand of mickey-take to things, John Isaac and sidekick Jim ‘Chief Grom’ Bennett are holding a kind of twisted, camp court. “The myth of the biker, the myth of the surfer, they’re the same thing, really, aren’t they?” says John, as he sells an art print and a bottle of lager to a mammoth Basque bloke in cut-off denim jacket, with a bubble visored lid under his arm. “We’re just bringing a bit of British humour into the mix. Motorbikes and surfboards are all supposed to be about fun, right?” John asks. 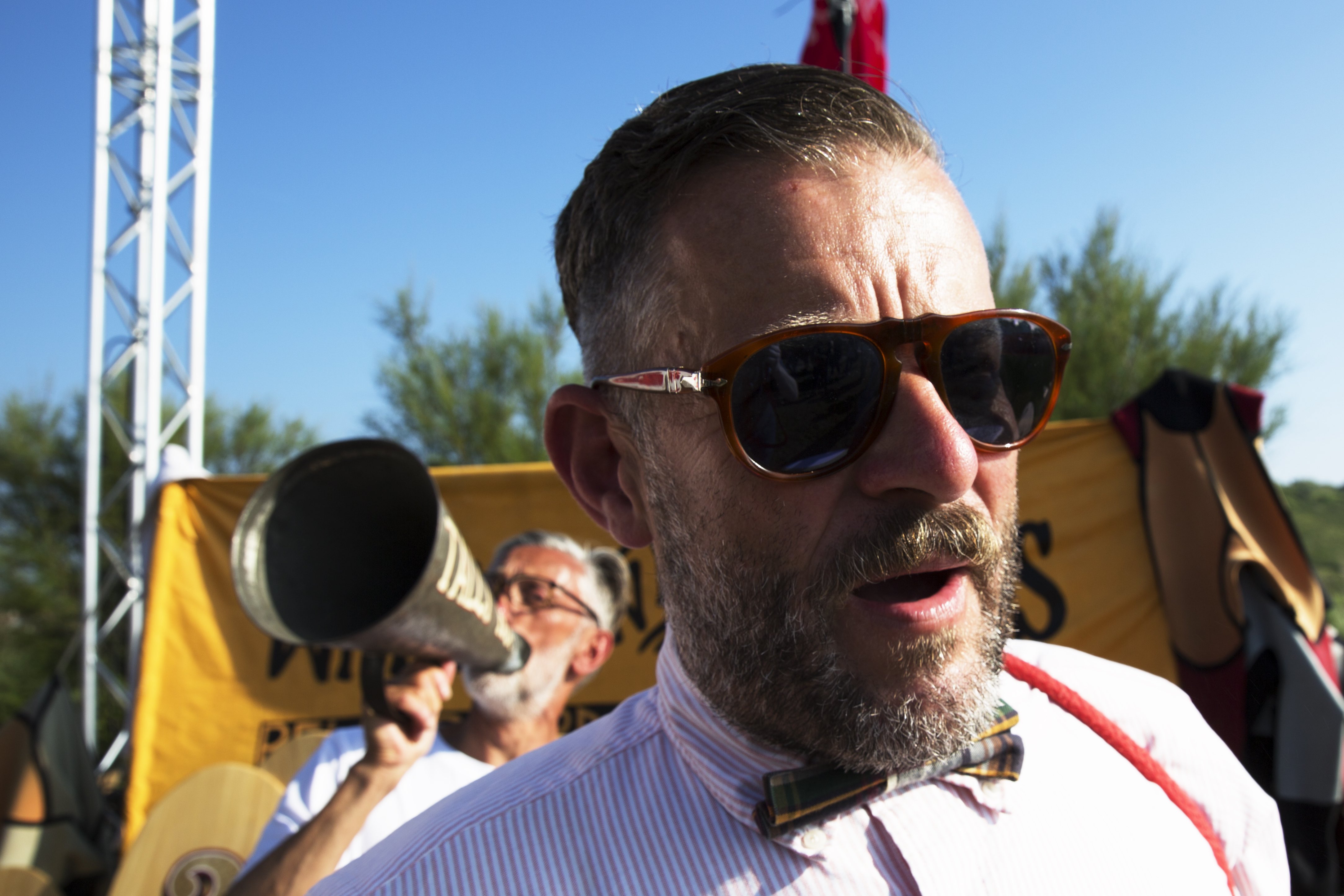 The Cornwall-based dynamic duo have for years been bridging the yawning gap between greaser and surf culture by holding surf, bike and hot rod gatherings in the South West of England. This is the first time they have brought their retro brand of wave riding to foreign shores. They have been tasked with running the festival’s ‘Got Wood’ Bellyboard Championship — as well as knocking out a hand-picked selection of art and chilled libations at the Revolver Surf Club Beach Bar. “We’ve always been about having a laugh”, he says, ”the worst thing to do would be to take yourself too seriously.”

Taking themselves too seriously is not something John and the Revolver crew could ever be accused of. Opening the first ‘boutique’ surf shop in Newquay around the turn of the millennium, John has been a lifelong devotee of not only the salt, but petrol too. With a coterie of like-minded souls he runs hot rods at the Pendine Sands event each year. He has been a tweedy aficionado of all things wheeled and retro across the cultural spectrum. 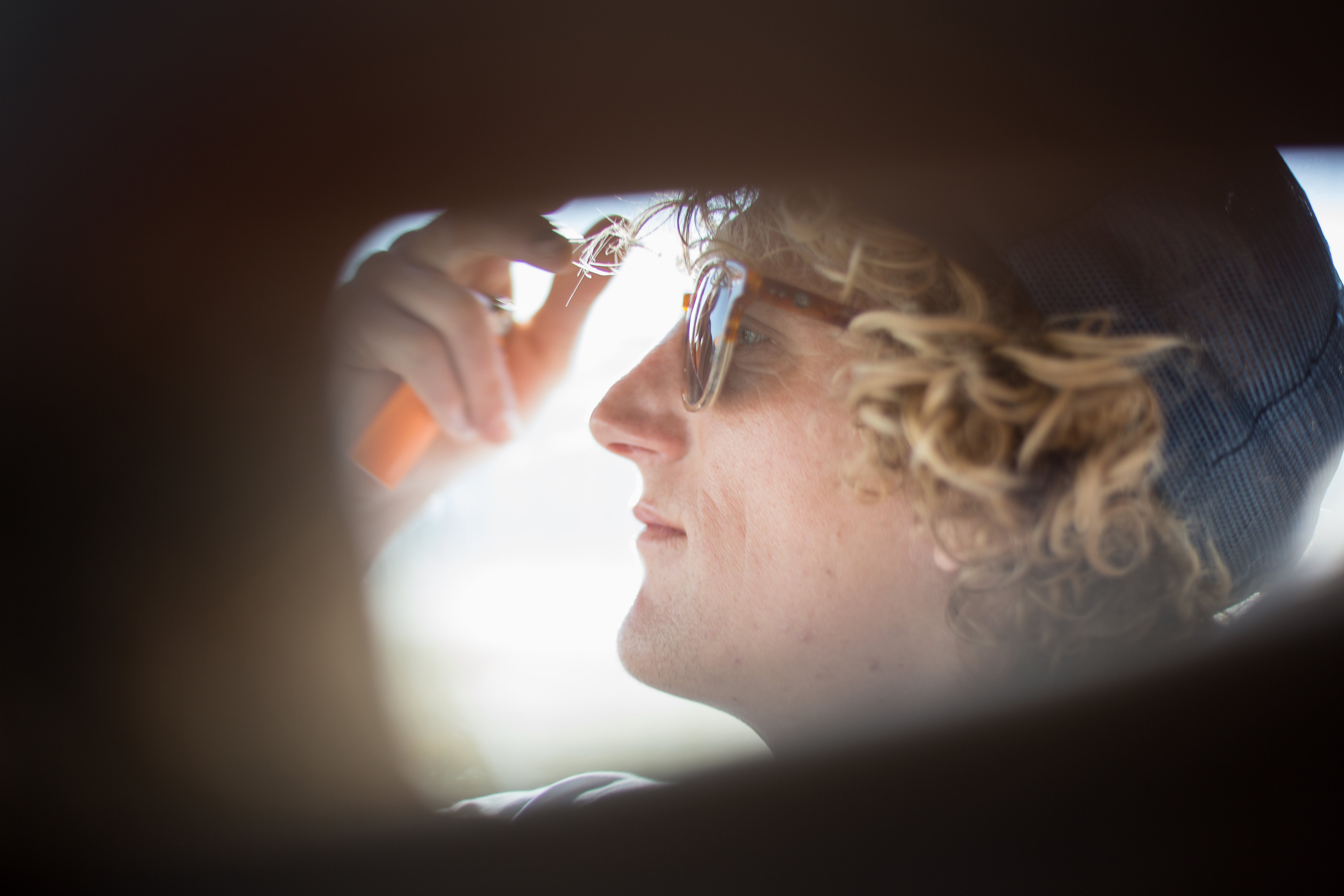 “It’s all the same thing really,” he says. “Riding is riding – whether it’s a lump of ply, a chunk of yank heavy metal or English Iron.” Revolver has always been stacked full of product and references not just of surf history’s more innocent moments — but those of hot rods, surf wagons and two wheeled sleds of every description. Young Jim was there right from the start as a preteen helping around the shop. Over the years he has become one of the most dynamic alt. surfers on the coast. “We’re all about riding anything,” says Jim, “single fins, shortboards, logs, paipos, motorbikes and mopeds!” A feeling common in the shared DNA of surfers and bikers that may be obvious – but it’s still surprise to many. 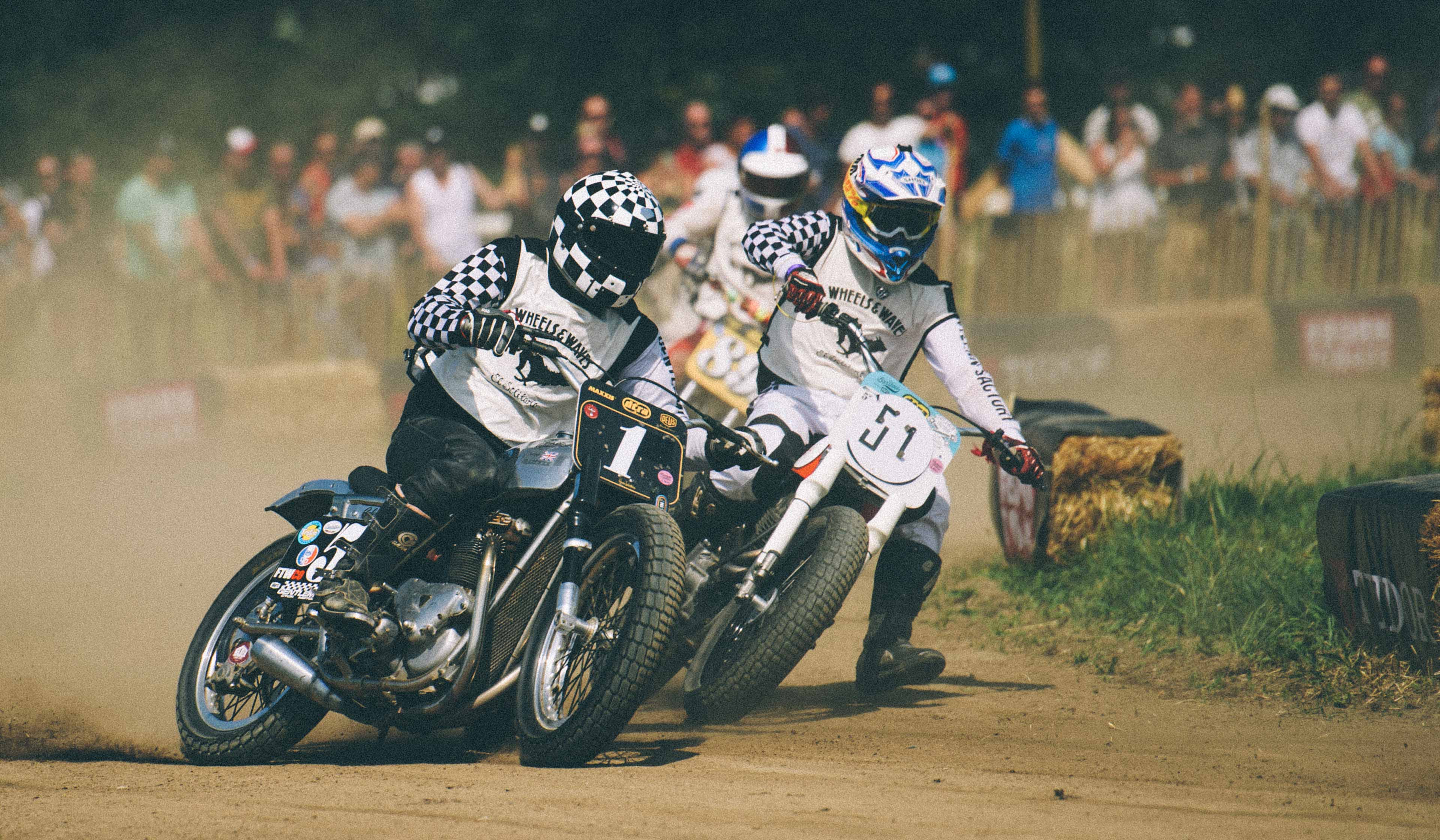 Look at Bruce Brown’s epoch making film On Any Sunday – a movie that has become a kind of creation myth of custom bike culture. Bruce, of course, also produced, shot and directed Endless Summer — a flick that did the same job on sixties’ surf scene a few years before. “Bellyboarding is proper traditional surfing,” says John, who is dressed nattily in pink shirt and bow tie, “it’s not about being the coolest or being the best surfer. But when it all comes down to it, it’s all about the ride. And that’s what the custom bike scene is all about too.”

It seems like only yesterday that the new waves of custom bike builders were a bunch of greasy-fingered, garage-bound troglodytes, turning out devastatingly unruly rides. But the internet kicked in about the same time a new generation of bikers started to eschew stock bikes, mass produced by the mainstream companies, in favour of garage-built machines that were lean, tough — and crucially — different from the mainstream production models pushed by the big manufacturers. 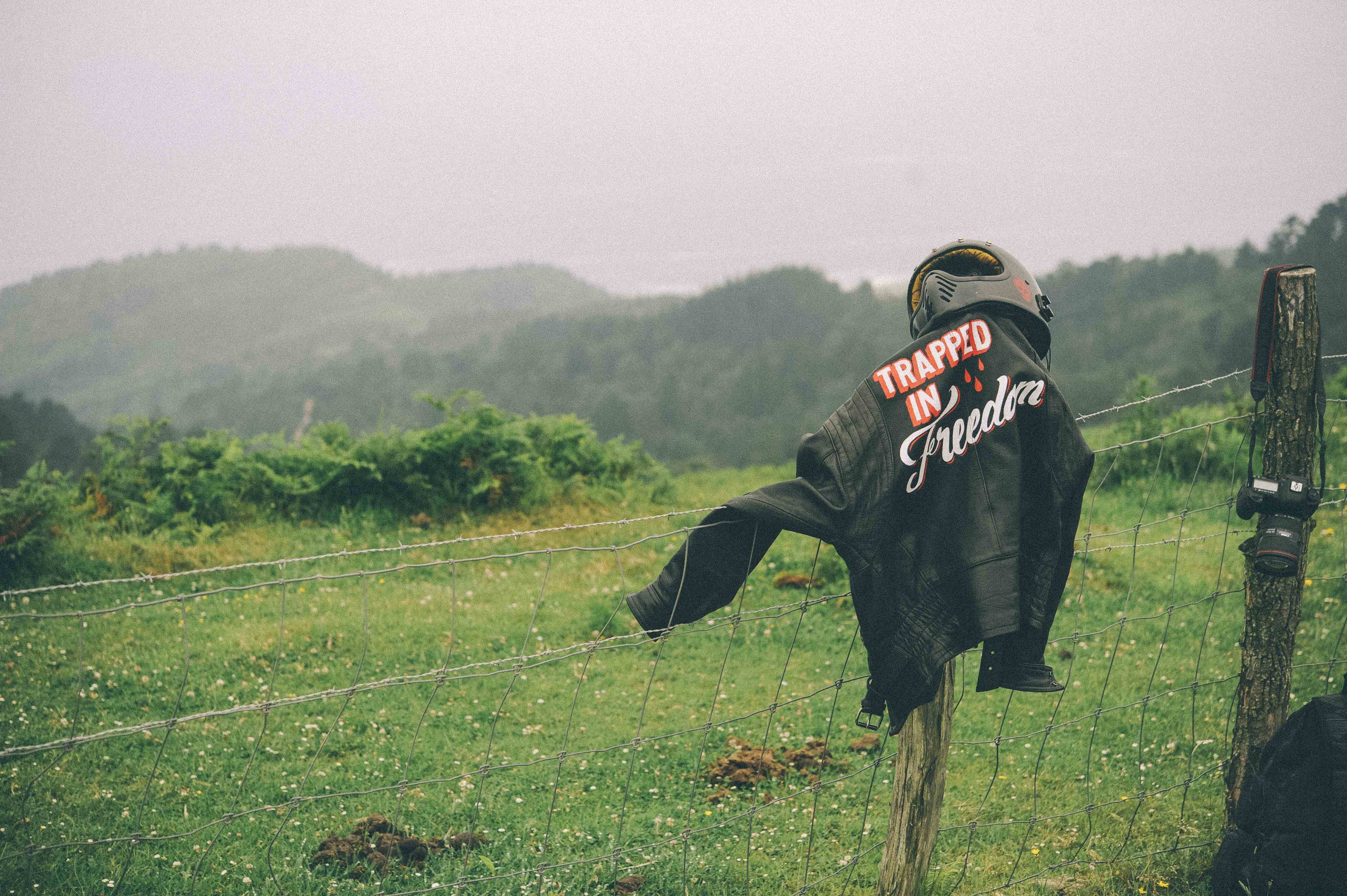 And now — with pixels and fibre optics having disseminated the creed of custom built mechanics all over the planet —  the world and his little brother has taken to two wheels. In the same way that backyard surfboard builders created a culture in hand wrought fibreglass and resin, the big bike manufacturers have looked to those pioneer garage based builders and have been producing models inspired by DIY superstars. In many cases using designers and engineers of the noblest custom houses to shake down prototypes that have fed back into retro releases that recall the greatest moments of 20th century motorcycle design — updated for the new millennium. 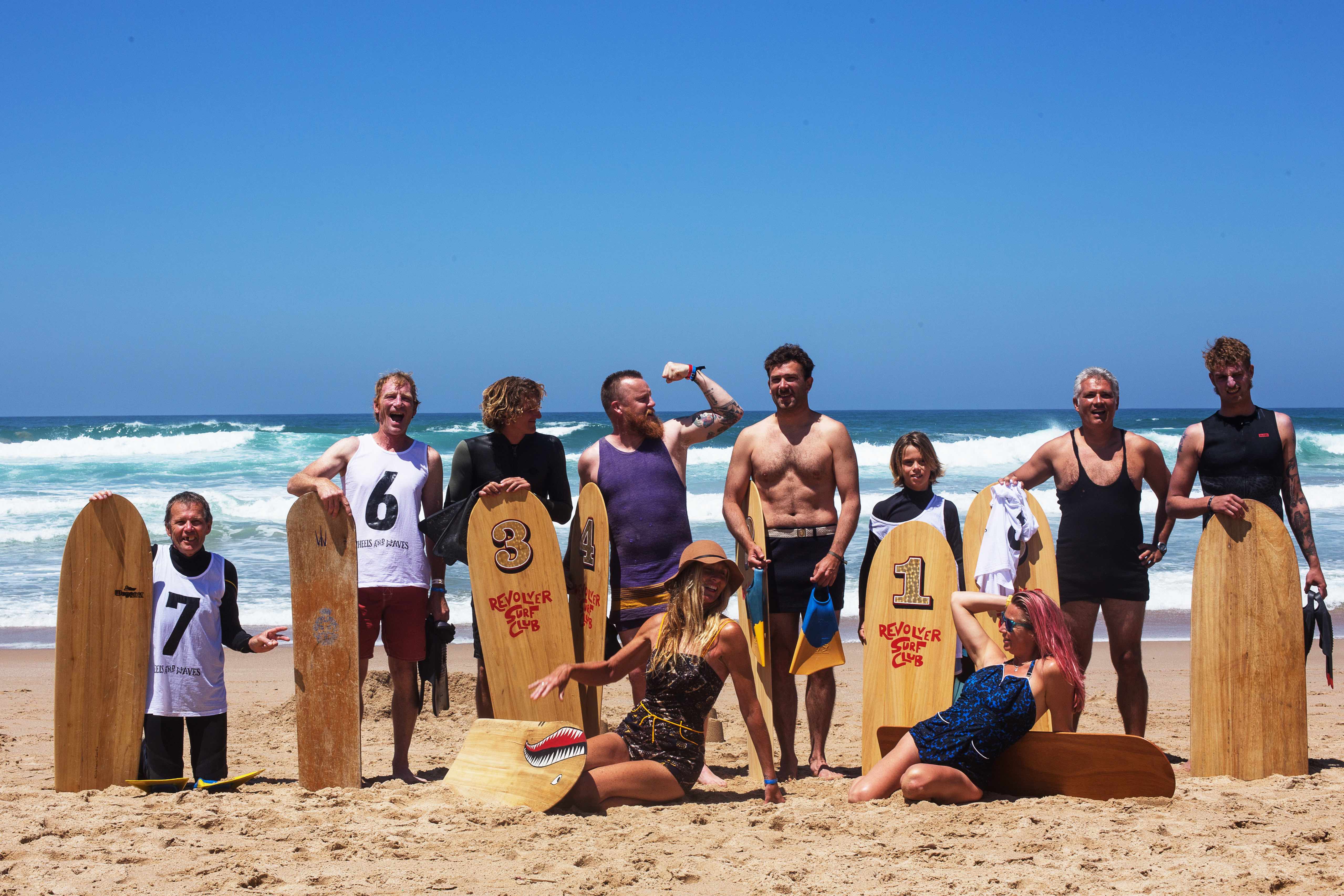 The Basque Country is hemmed in on all sides with mountain twisties and some of the greatest reefs, beaches, river mouths and point breaks in continental Europe. It is also possessed of a gloriously irreverent attitude to almost everything. No wonder then, that a gathering of like minded souls that span the twin cultures of bikes and surf have taken root here so strongly. “People come down here because in the big cities they feel tied hand and foot,” says John, “there’s a sense of freedom in motorbikes and in the ocean. At Wheels and Waves these things just come together beautifully.”

Discover more pics from Wheels and Waves on Triumph’s For The Ride blog here.

Linkedin
RELATED ARTICLES
OTHER ARTICLES
Yohon Tatum, aka Legendary Father of the House of Tisci, reflects on nurturing a new generation of talent.
Campaigners reflect on what the supreme court’s decision to allow buffer zones in NI means for the future of reproductive rights in the UK.
After building his reputation covering the US civil rights movement in the 1960s, the photographer went on to produce some of the most enduring images of the past century.
David 'Dee' Delgado’s photo project is about honouring and uplifting the city of his youth, and a world rapidly disappearing under the relentless onslaught of gentrification.
After fleeing the war in Ukraine, people are finding it impossible to secure affordable and decent housing in the UK.
Mass crustacean die-offs in the North East have led a community of fishermen to take action to save their seas.