Outdoor / Joburg’s pioneering cyclists are breaking down social barriers, one ride at a time 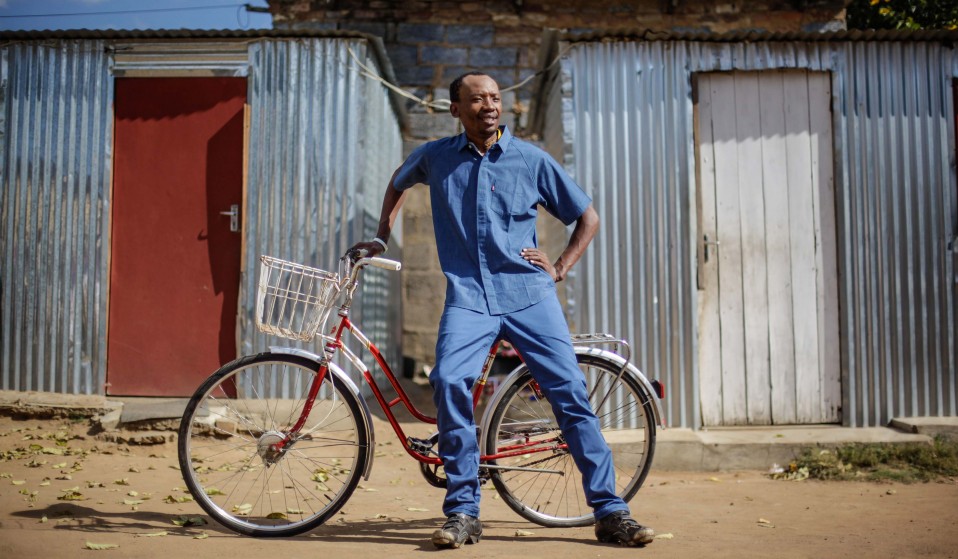 In our latest story from The Commuter Journal – a cycling paper made by Huck and Levi’s® Commuter™ – we meet the founders of Critical Mass Johannesburg who are using the power of cycling as a force for social change on South African streets.

In our latest story from The Commuter Journal – a cycling paper made by Huck and Levi’s® Commuter™ – we meet the founders of Critical Mass Johannesburg who are using the power of cycling as a force for social change on South African streets.

When people say Johannesburg is not for sissies, it’s a warning about the rough edges of a city where stories of crime and reckless driving dominate press. It’s an invocation too – a call to bravery, to get on the saddle and ride the streets regardless.

The message has been getting through steadily over the last six or seven years. And it’s sparked a two-wheeled revolution, fuelled by sports cyclists and weekend warriors who are emerging from peri-urban parks and nature reserves to insert themselves more directly in the bustle of city life.

The knock-on effect of the rise and rise of commuter cycling has not only forced a re-negotiation of urban planning, it’s shaken up ideas of so-called “no-go” zones. 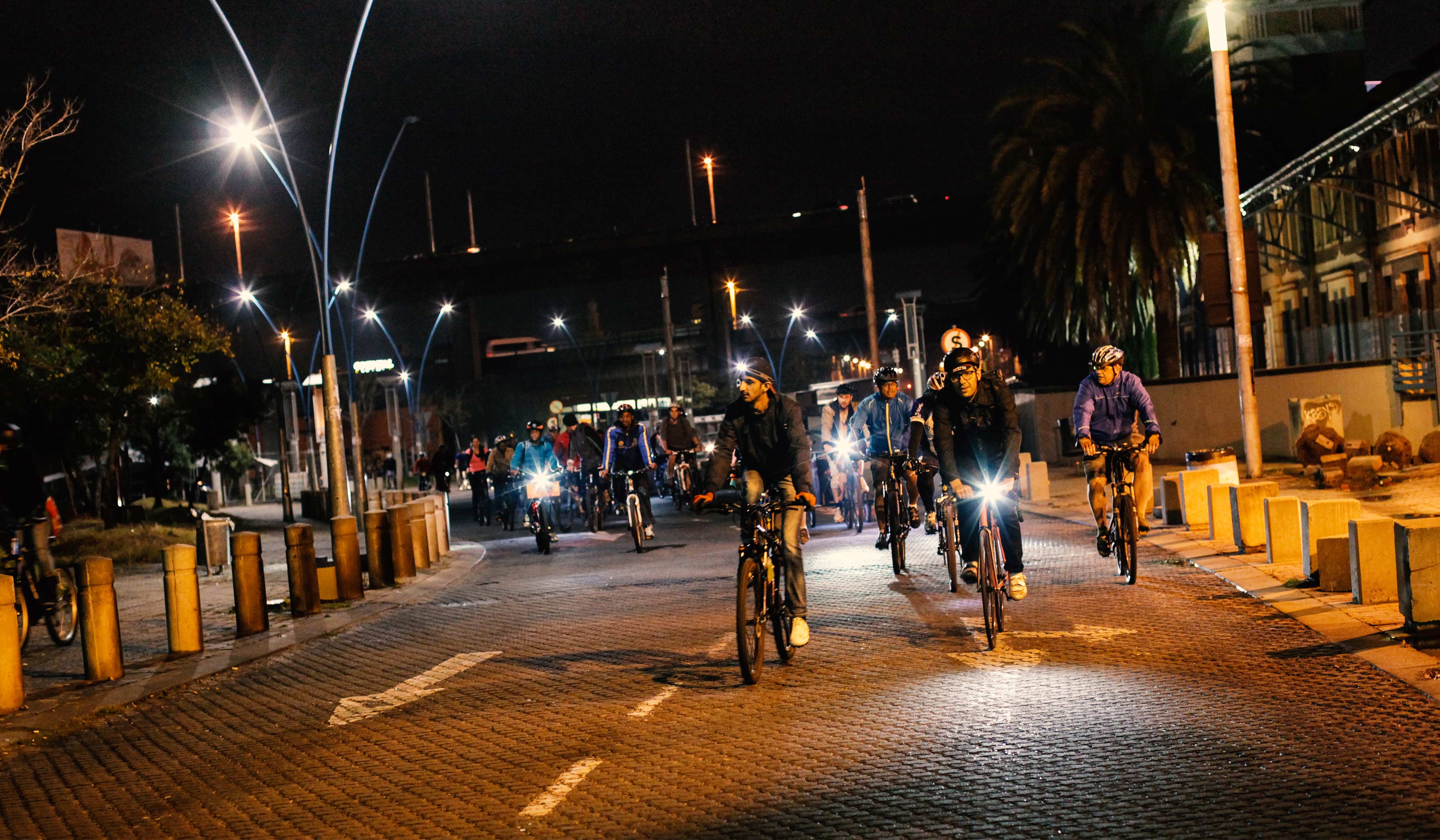 James Happe is founder of Critical Mass Joburg, a night-time group ride that swarms through the city on the last Friday of every month. Back in 2007 he gathered together a few friends – and friends of friends – and organised an impromptu night-ride with a group of about twenty cyclists. In a city where areas are off-limits after dark, threats of bike-jacking are real and cycle lanes non-existent, the sight of a small crew cycling around joyfully was totally new. Happe, though, believed in Joburg; even its “rougher” neighbourhoods were ready, he says, for wheel-powered change.

The idea stuck and now years later over 1,000 cyclists join in the monthly charge-around. It’s given rise to numerous offshoots including the annual Freedom Ride, full moon rides and women-only rides. Joburg is a place full of collisions and contradictions, but it’s got a big heart, big spirit and energy that’s infectious: the cyclists know this exquisite magnetism. 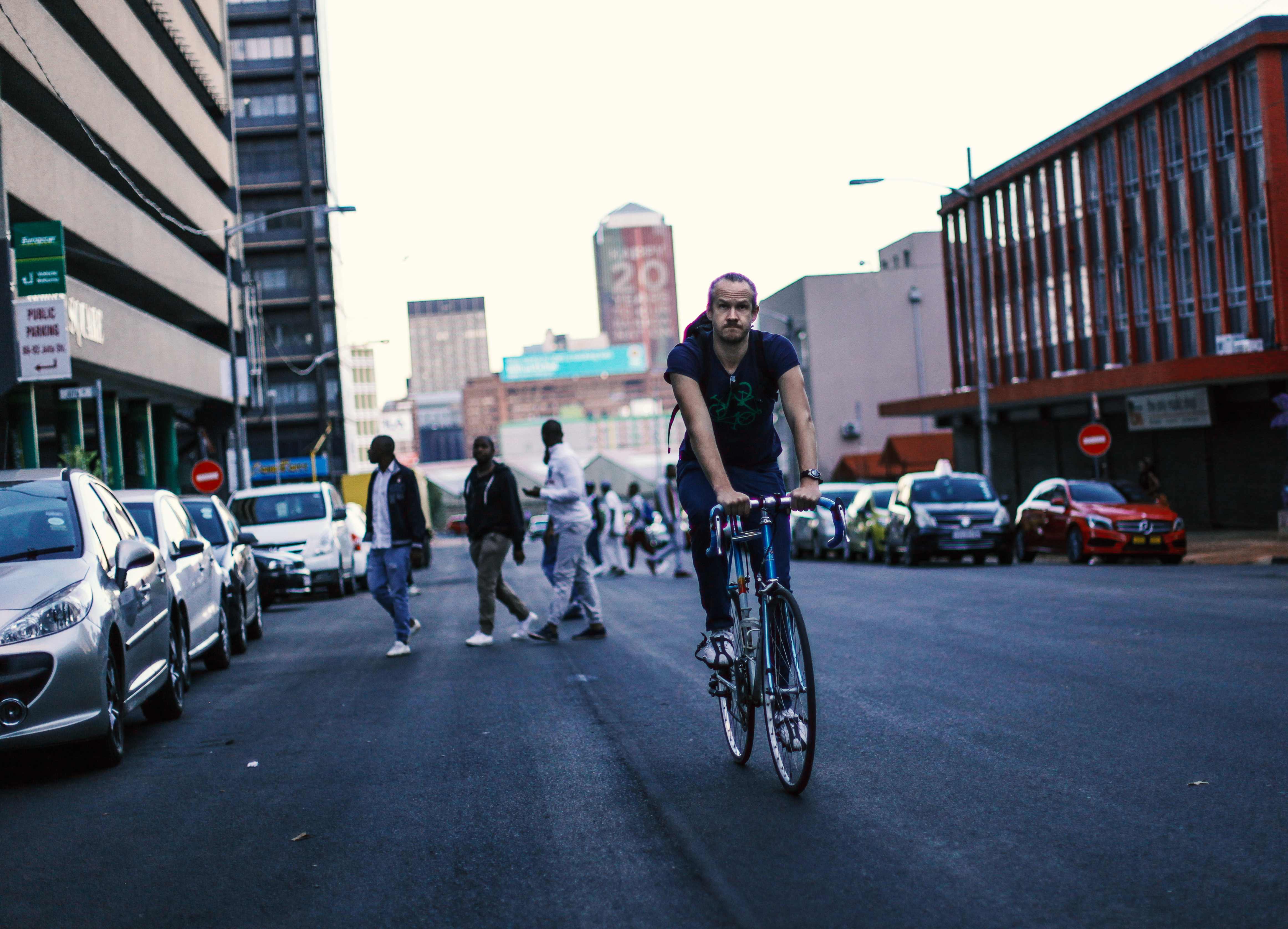 Critical Mass originated in San Francisco in the 1960s, when a group of cyclists-turned-activists started challenging social boundaries as a way to stake their claim on the city’s streets. It’s since become a global movement, encouraging vehicular traffic to share public space with cyclists and pedestrians in major cities around the world.

“Critical Mass has given people the opportunity to explore parts of the city as citizens not as tourists going on safari,” says Happe.

The emphasis of Critical Mass is not on beating the clock or clocking up kilometres – most rides are about 20 kilometres in distance, are free and laidback. It’s not unusual to see a mix of hardcore riders peddling alongside newbies, people on unicycles and riders with baby and kiddies in tow.“

Critical Mass is about having fun, in a group, on wheels,” Critical Mass administrators state quite plainly. Be safe, be responsible, be cool.”

For Melvin Neale, who co-founded Critical Mass with Happe and is responsible for mapping out the monthly routes, night rides are a sampler and stepping stone to getting more people on bikes, more frequently. Riding different parts of the city as a group gives people enough confidence to become commuter cyclists. 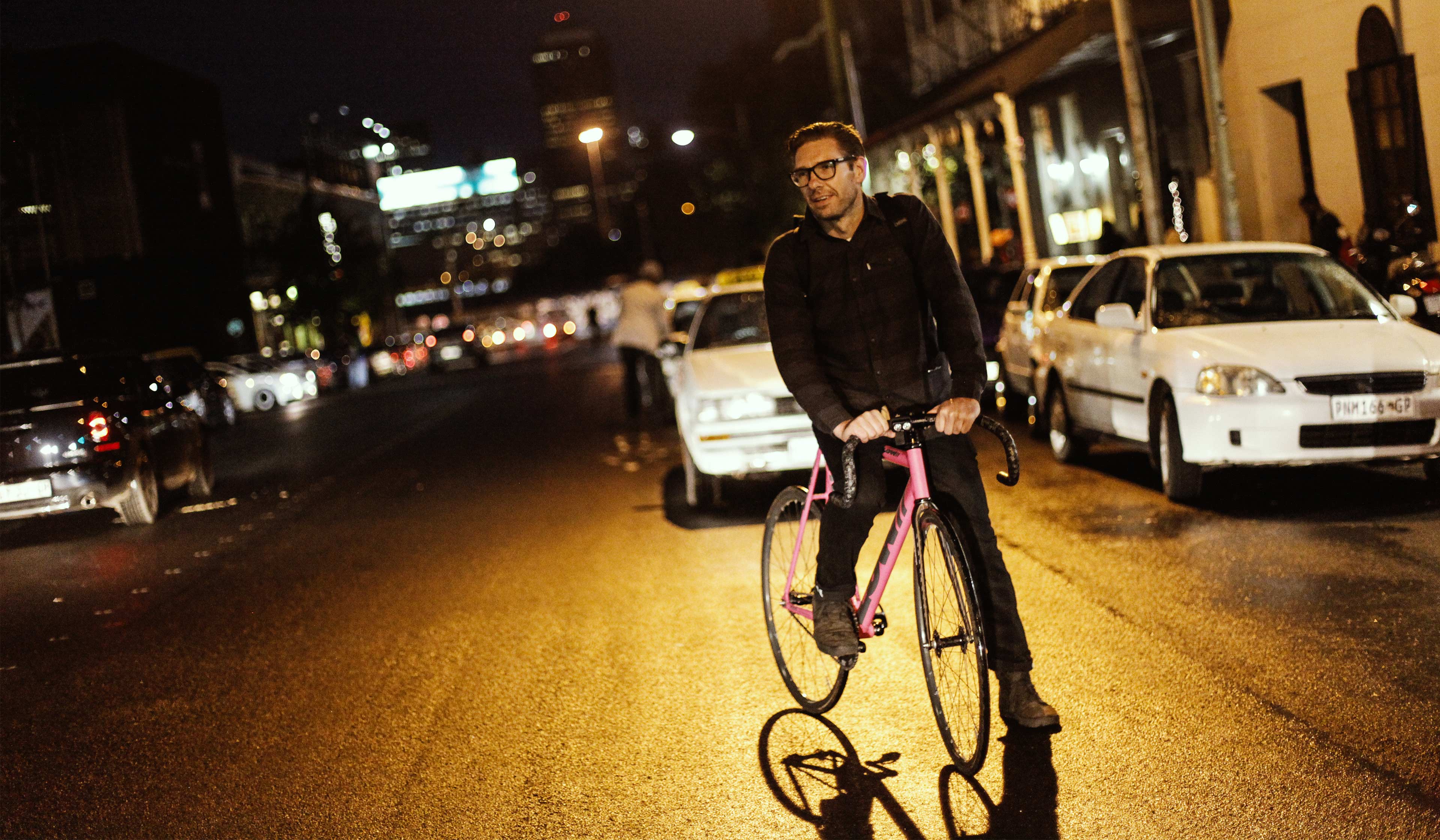 “Most people are afraid they’ll be a crime target or that they’ll be hit by a car. But they find once they make the decision to just get on their bikes and start cycling to and from work, they’re fine. It’s about being aware, being assertive, making yourself visible and being respectful to each other,” says Neale.

Happe and Neale know that Critical Mass is not a panacea for a city with social ills. They understand that cycling comes with a price tag and, like many things in South Africa, barriers to entry may be dictated by class and wealth. But in a country dominated by cars, interacting more spontaneously with the city is one small way to bridge the divide. “When you’re a commuter cyclist you start talking to street vendors, newspaper sellers and people who recognise you; you have conversations,” says Neale. 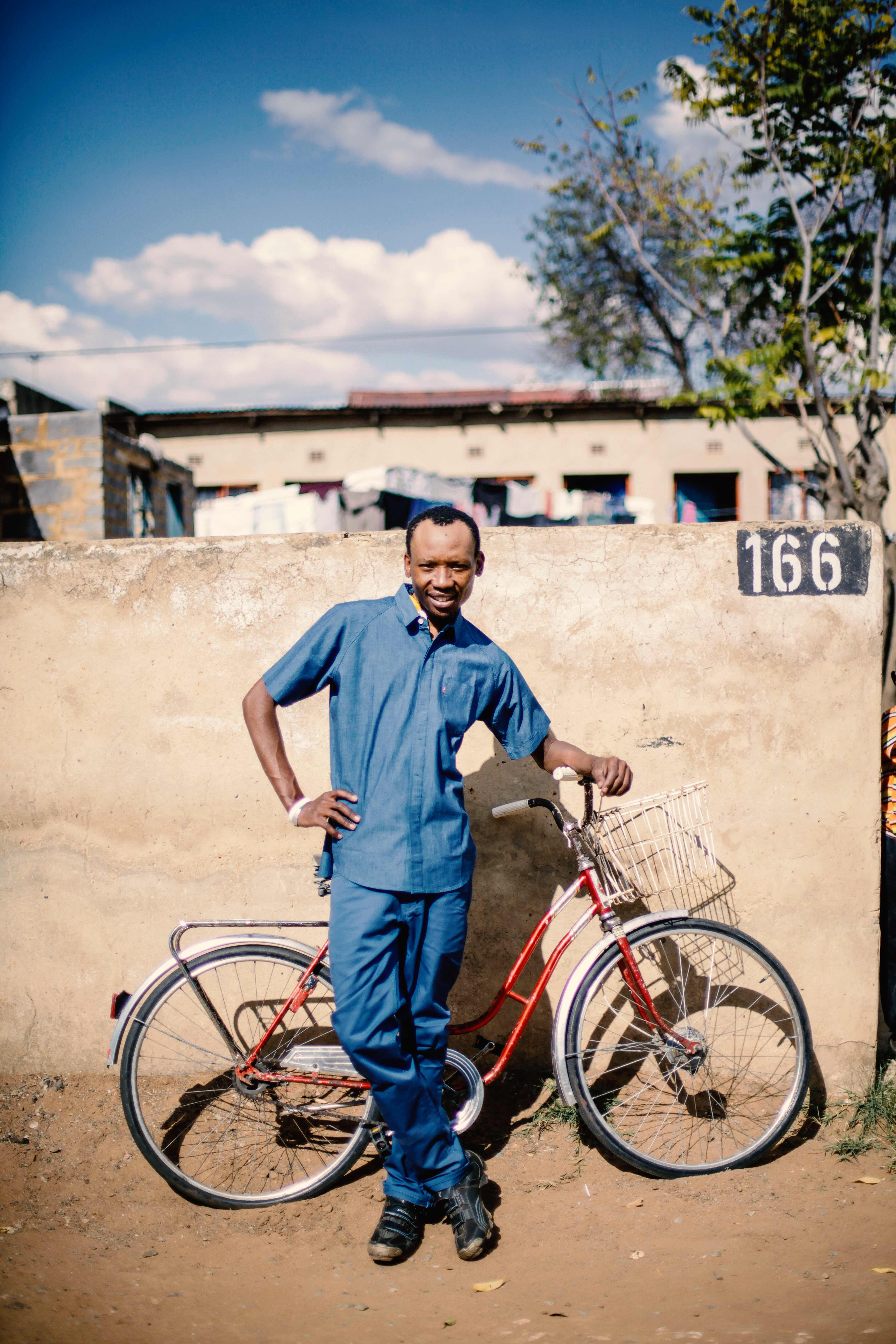 Mahape started a bicycle tour company in this former township in 2006. Townships under South Africa’s Apartheid regime enforced separation of race groups; now even after twenty-one years of democracy, segregation is a lingering hangover from those dark days. For Mahape the tours build bridges. And bicycles, he says, are the magic ingredient.“

When I started my business I couldn’t afford a minibus so I bought bicycles. People were open to trying something different so they came on the tours,” says Mahape. “When tourists are on bicycles locals see them as equals, not people stepping off buses with big cameras that they think are rich with lots of money to spend.”

Mahape promotes his business at Soweto festivals, giving away free bicycle tours to locals. It gets Soweto locals to see their own township as tourists and helps them better understand and accept outsiders in their backyard. “I love it when locals tell me they’ve learnt something new about their own township,” he says.

Instead of whizzing around on air-conditioned buses with set itineraries, the bicycle tours tend to be more interactive, more organic. The tours have been incident-free, and not a day has passed when they haven’t run, despite constant challenges. “It can be difficult doing the tours in Soweto,” Mahape says of the area’s dire need for better infrastructure. “It’s not just that there are no cycling lanes here; there aren’t even sidewalks or pavements.

“Over the past two years cycle lanes have made it onto the City of Joburg’s upgrade plans. The lanes still don’t cover the city in any significant way but they stand as kilometres of intent and a move in the right direction for a community desperate for alternatives to car-based transport. Cycling culture is yet to be entrenched in Joburg; motorists still park in cycle lanes or use them to squeeze past other cars. But citizens are pushing back.

Joburg’s two-wheeled revolution is pushing forward whatever uphill climbs may lie ahead. It’s as if a million miles have passed from back in 2007 when a few guys dared venture out – it makes a bit of courage a thing of beauty.

As Neale says: “The best part of Critical Mass is that it’s got people realising that parts of the city they thought were scary, crime-ridden and inaccessible after dark are actually places full of life, and are spaces they can enjoy.”

Linkedin
RELATED ARTICLES
OTHER ARTICLES
While protests over abortion rights rage in the US, access to abortion services is still almost nonexistent in parts of the UK.
Our new magazine is here, starring the inimitable Mitski. Order your copy now and join us on a trip around the world.
Government plans to make it harder for people to go to university will only entrench inequality.
In her new book, the author gives a blistering account of the horrifying North African refugee crisis.
The government is scrapping the Human Rights Act in a move that will hit marginalised people hardest.
Whether posing for portraits, making her own images or collecting works, the artist recognised the impact of photography at a time when it was not a widely accepted art form.