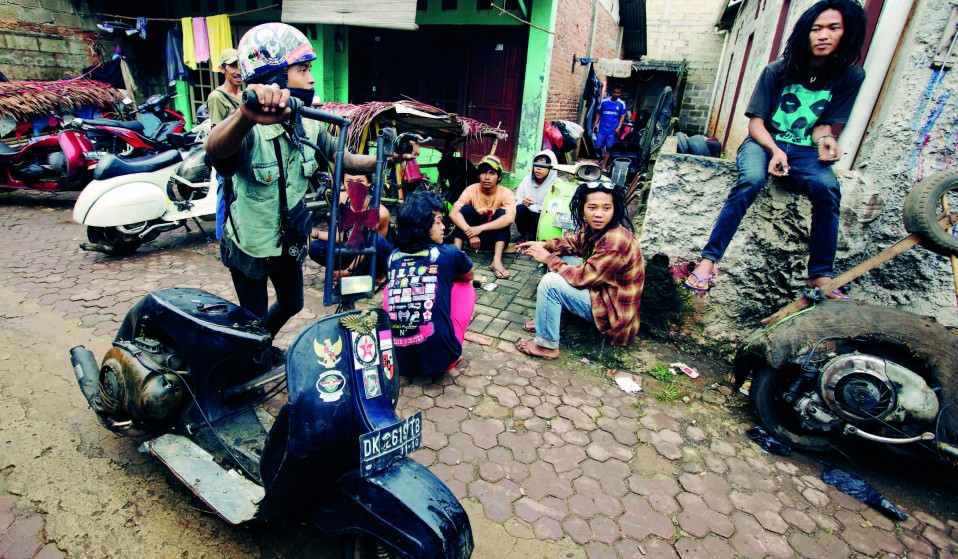 Indonesia's love affair with Vespa scooters has taken a punk-inspired turn, thanks to a renegade faction of extreme DIYers.

Indonesia's love affair with Vespa scooters has taken a punk-inspired turn, thanks to a renegade faction of extreme DIYers.

The classic Vespa scooter is a beloved and well-recognised brand in Indonesia’s motoring history. Some of the first models seen on the streets of the capital, Jakarta, were given by the Indonesian government to peacekeeping troops returning from duty in Congo in the 1960s, and it was one of the first countries outside of Europe to manufacture the brand.

Today, Vespa clubs have sprung up across Indonesia, with thousands of members devoting their time and skills to lovingly restoring old models to their classic form. Then there are the ‘Vespa Ekstrimists’ – a renegade faction of clubs that champion mutant forms.

The Vespa Ekstrim culture bears the hallmarks of punk, sharing its commitment to freedom – both of thought and self-expression – as well as a sense of solidarity among outsiders. The similarity ends there, though; most Vespa Ekstrimists are happy to live a more conventional lifestyle, providing for their families and working regular jobs, and choose to express their uniqueness via their scooters alone.

But why rehash a cute little Vespa and not some other two-wheeler? For one thing, cost is a major factor. Most of the Ekstrimists don’t have a lot of income, so the fact that old, discarded Vespas can be bought for 300,000- 500,000 Rupiah ($33-55, £21-35) makes them more appealing than expensive Japanese bikes. The scooters’ hardy mechanics are also a factor: everyone in the community talks lovingly of the Vespa’s unfaltering engine. But the clearest driving force among all Vespa Ekstrimists is the thirst to be different – the desire to stand out from all those other Vespas on the road. 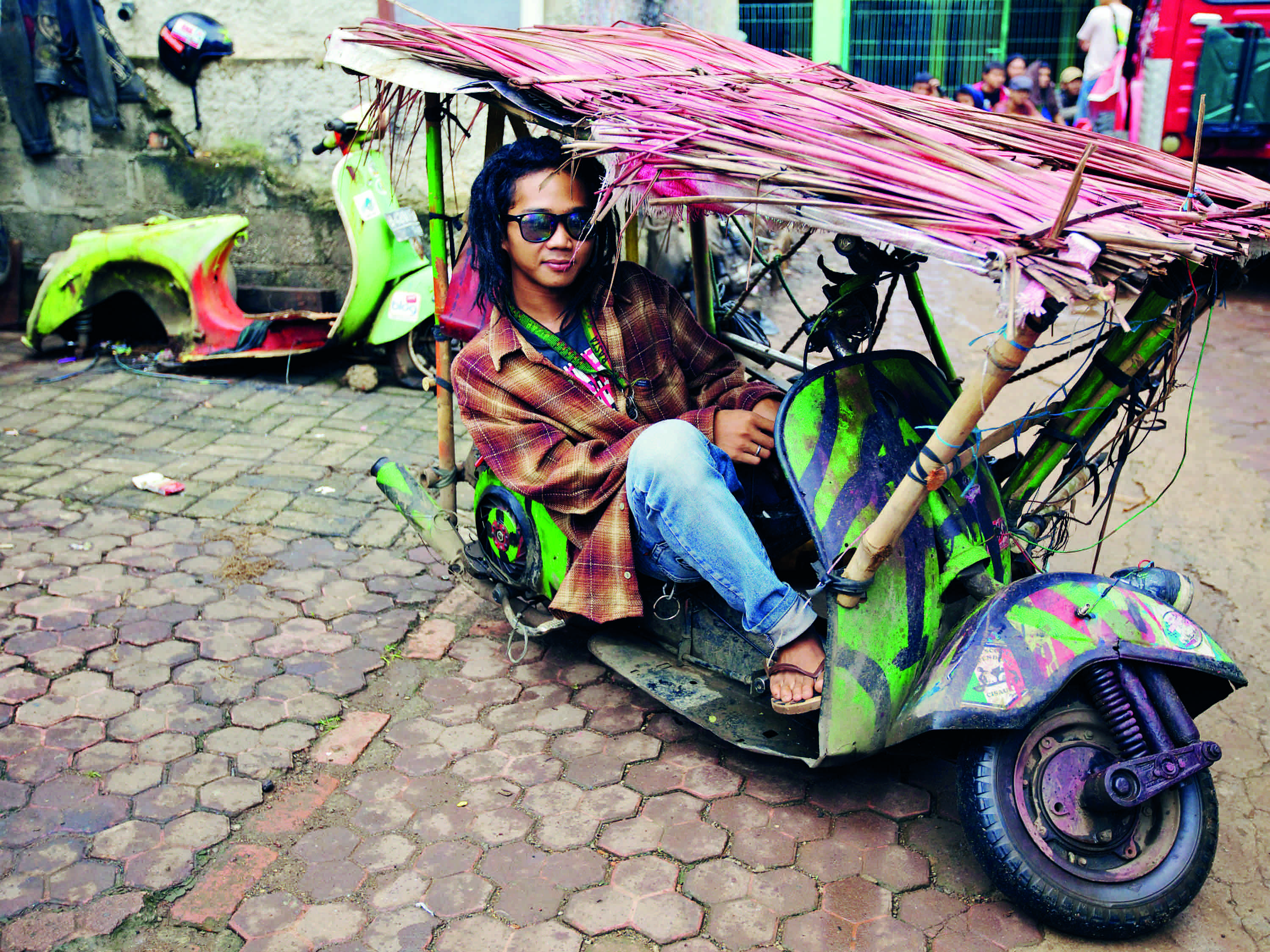 Hendrik, twenty-two, poses with his thatch-roofed Vespa in South Tangerang in Jakarta. He rode from his home in Bogor (about sixty kilometres from Jakarta) to hang out with his Vespa Ekstrim buddies. After finishing school in 2008, Hendrik is still jobless. He says the bamboo thatch didn’t require a lot of money and he likes the cosy feel it gives to his scooter: “The roof really makes it comfortable and cooler on hot days, and I can always take an extra passenger with me. People always look at us if we are on the road, and that is super cool.” 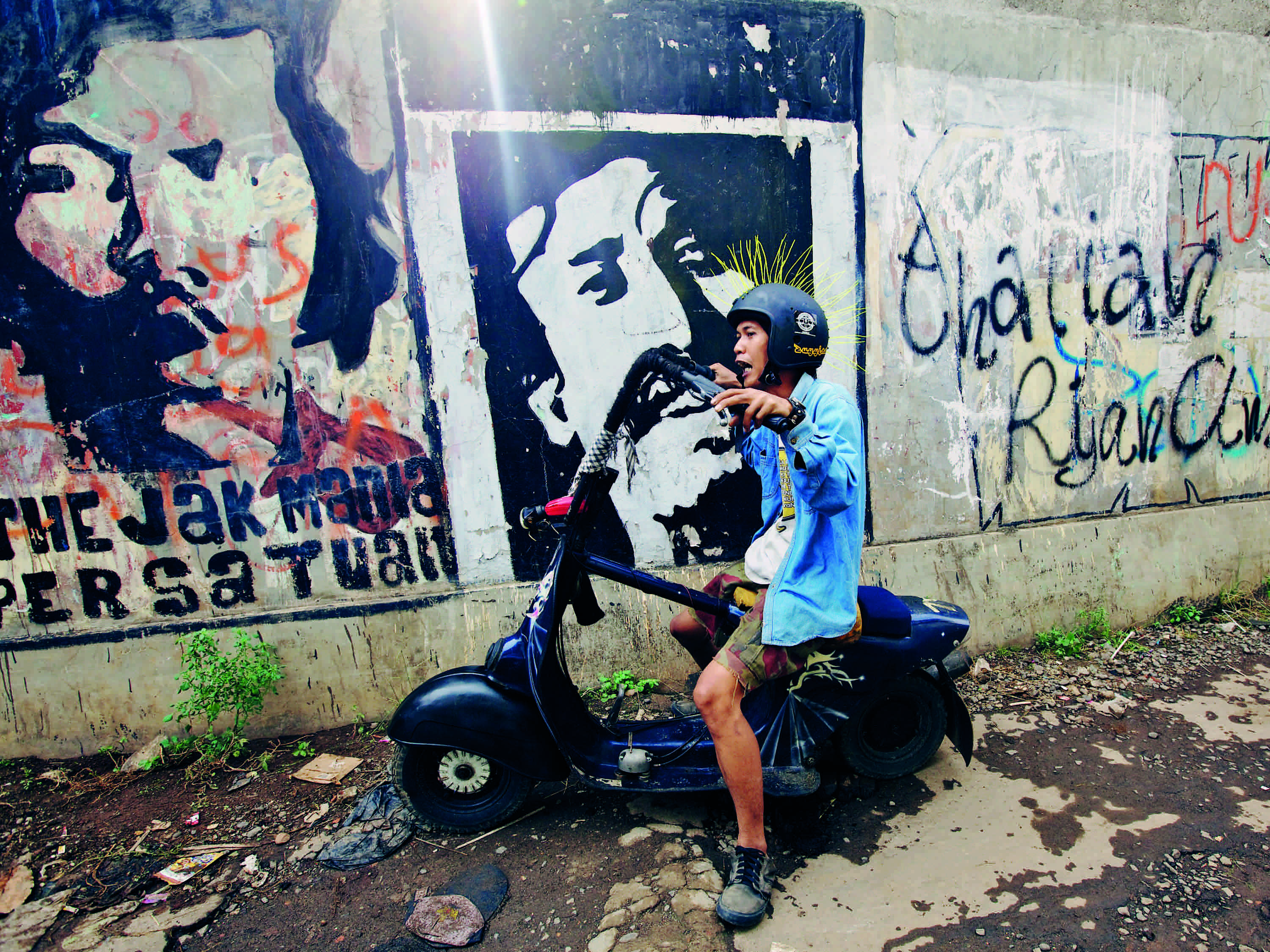 Jojo, twenty-six, who sells phone accessories from his home, met his wife through Vespa Ekstrim. He loves the solidarity among the close-knit community. Once, on a ride to the eastern part of Java Island, he got a flat tyre. Every one of the other riders stopped to help, but no one had a pump, so they all pitched in to find a solution, eventually filling his tyre with grass from a field. When they got to the nearest petrol station, “the garage attendants couldn’t stop laughing”. Unsurprisingly, Jojo’s motto is: “One Vespa; a million brothers.” 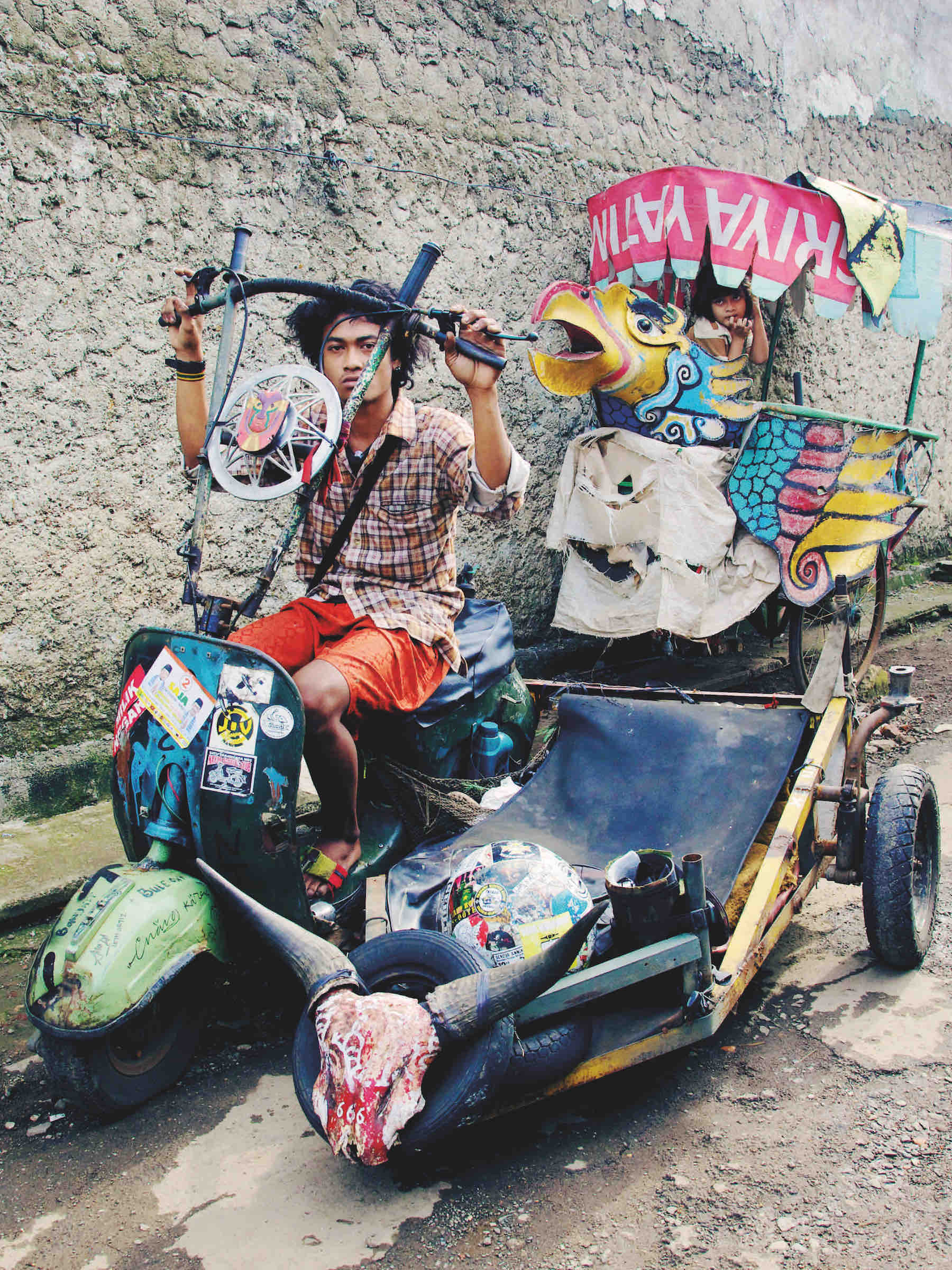 Syafrizal, twenty and a welder, loves the open road and regularly takes his Vespa on tour with other Ekstrim owners, even though it often brings encounters with police.

“Sometimes they will cover their noses while making an inspection, and if they don’t like us they will give us punishments like making us walk backwards with our Vespas, or sing a song they like, or do push-ups,” he says. “I’m used to it, though. It’s very common, but it’s still too bad. It just shows that most people look at us with just one eye, as if we are trash.”.

Linkedin
RELATED ARTICLES
OTHER ARTICLES
With the UK now set to run out of vaccines, people working in the sex industry – particularly outside of major cities – have been left especially vulnerable, reports Brit Dawson.
Students are being left to languish in unsafe housing, in some cases leading to serious health complications.
Last week, Tower Hamlets council removed its nudity-restricting licensing conditions in a huge win for London’s kink community.
To mark the premiere of his new documentary on surfing giant Gerry Lopez, the filmmaker and former pro skateboarder sits down to share his unique brand of wisdom.
The author discusses her new memoir, which offers a sobering reflection on the racism and otherness she’s experienced along with a joyful celebration of her culinary heritage.
With the Women’s Euros in full swing, last week saw glorious, sweaty celebrations take place in a dedicated, safe space for female and non-binary fans.