Outdoor / Adventure / The twin brothers who paddled from Alaska to Mexico 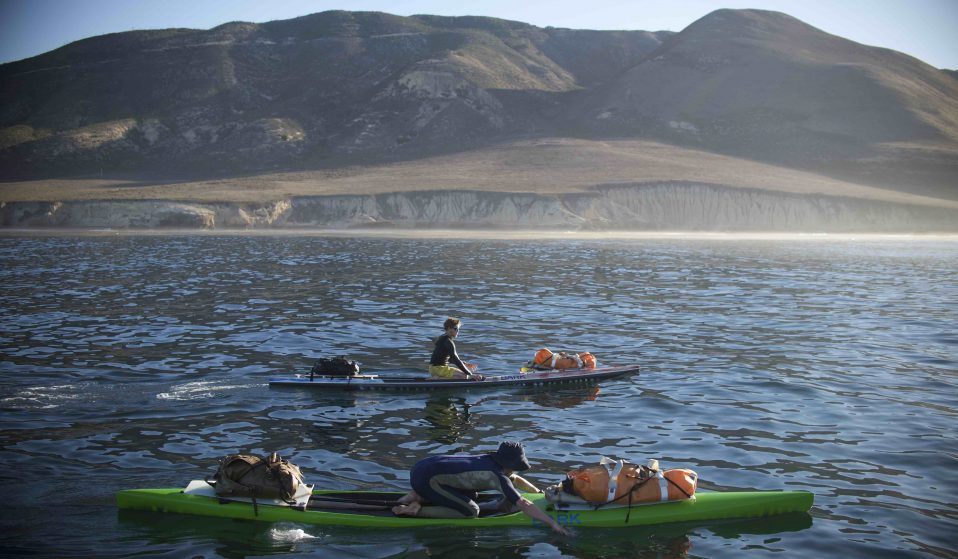 In 2016, Ryan and Casey Higginbotham embarked on a journey that would push them to their absolute limits – one that could only be completed if they worked as a team.

In 2016, after a lifetime spent trying to outdo each other, Ryan and Casey Higginbotham embarked on a journey that would push them to their absolute limits – one that could only be completed if they worked as a team.

Ryan and Casey Higginbotham can’t help but squabble throughout our interview, with each brother taking turns to have a go.

“That’s a dumb response,” one will say to the other; or, “What are you talking about?… I don’t think that really answers the question.” Sometimes, it will just be a simple, “I disagree.” Whenever the wounded party reacts, the aggressor acknowledges their victory with a grin, delighted to have successfully pissed his sibling off. For both Ryan and Casey, that’s usually the goal.

Ryan and Casey are 27-year-old identical twins, although Casey was born first – so he won that race. They grew up in a town about two hours south of San Francisco, and about three minutes away from the ocean. 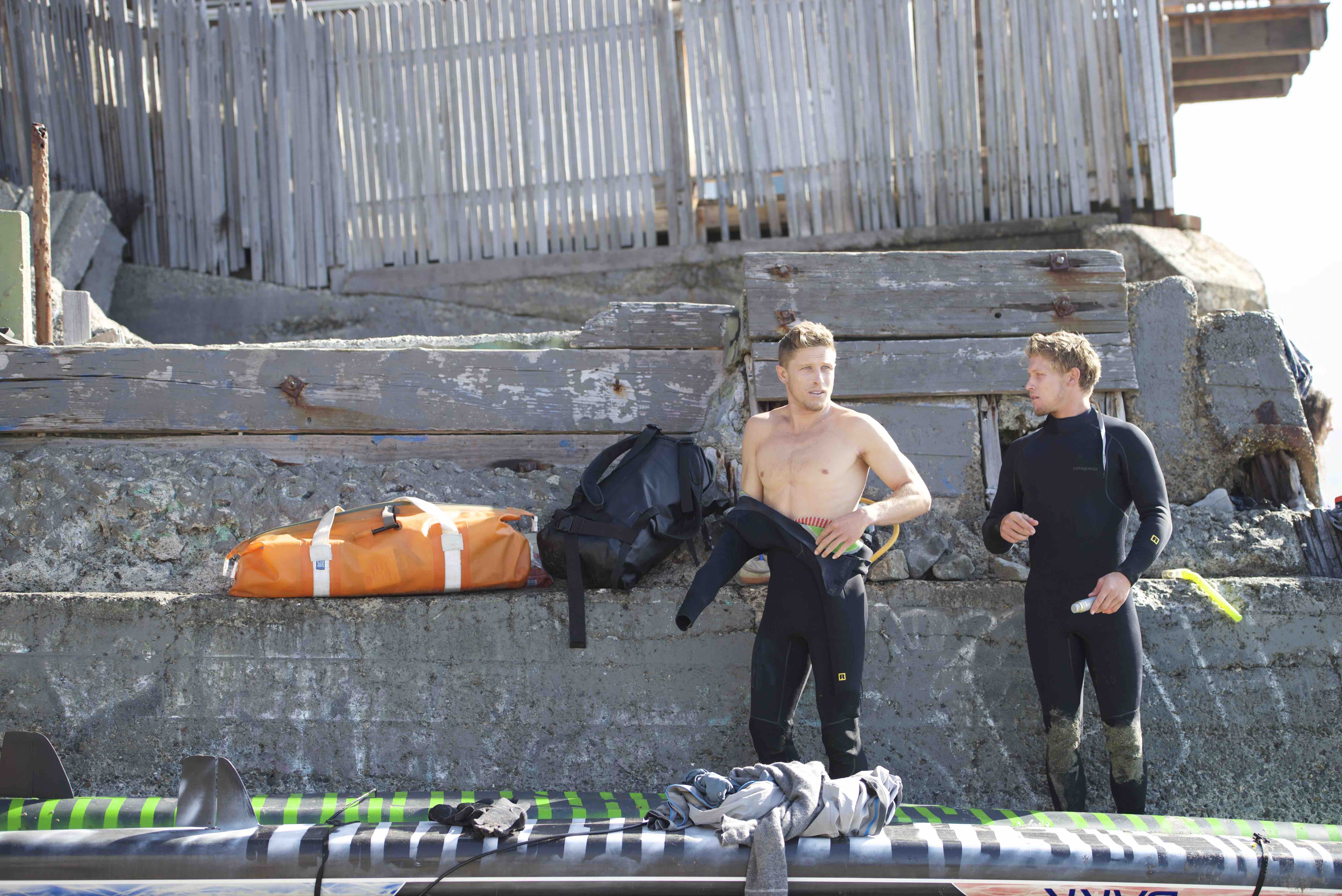 If they had been born as one person rather than two, that person would have had it pretty good. They would have had the looks of the most popular boy in a high school teen movie, with the athletic ability to match. They would have had a playful sense of humour and an insatiable thirst for adventure, fuelled by a childhood spent catching California waves until the sun went down. That person would have had a ton of friends, a supportive family and very few problems in the romantic department. But there just so happens to be two of them – so double all of that magnetism, and then double it again for good measure.

Perhaps the best thing about being a Higginbotham twin, though, is to forever have the perfect sparring partner. Imagine being young and healthy with energy to spare, and having an exact replica to expend all that energy with (and on). Ryan and Casey have spent their lives picking on someone their own size – that constant one-upmanship has led them to achieve unthinkable things. Because as far as they’re concerned, nothing could be worse than watching the other one win.

The competitive streak, Casey explains, was there from an early age. “Our dad had us doing push up contests when we were little,” he says. “The winner would get a pat on the back.” Growing up, the pair collectively excelled in baseball, waterpolo, gymnastics, karate, wrestling, swimming, Muay Thai, surfing and pretty much every other sport under the sun. “Except hockey,” Casey adds, almost wary at its omission from the list. “Cos we didn’t have hockey in our town.”

In the summer of 2015, just after they’d graduated from college, Casey and Ryan decided to really put themselves to the test: by prone paddleboarding 2,300 miles from Alaska to Mexico. They’d worked as lifeguards and surfed all their lives, so prone paddleboarding – paddling while lying down on the board – felt like a natural thing to try. After a life-time of simply being good at everything, they felt a burning need to challenge themselves beyond their physical abilities. “I felt like there was something more, something missing – a void that I needed to fill,” Ryan says. “I needed to challenge myself and do something that I wasn’t sure was possible.”

With no real blueprint to follow, it took them over a year to prepare for their expedition. They downloaded the training guide used for the Paddleboard World Championships – a gruelling 32 mile race between Hawaiian islands – before doubling, tripling and then quadrupling the recommendations to match their mammoth ambitions.

The year was spent acquiring equipment, mentally and physically preparing and, on occasion, beating the living shit out each other. One fight on Christmas Eve in 2015 left Casey with two black eyes and a surplus of stitches, although neither of them remember what they were fighting over. (They made up about ten minutes later.) 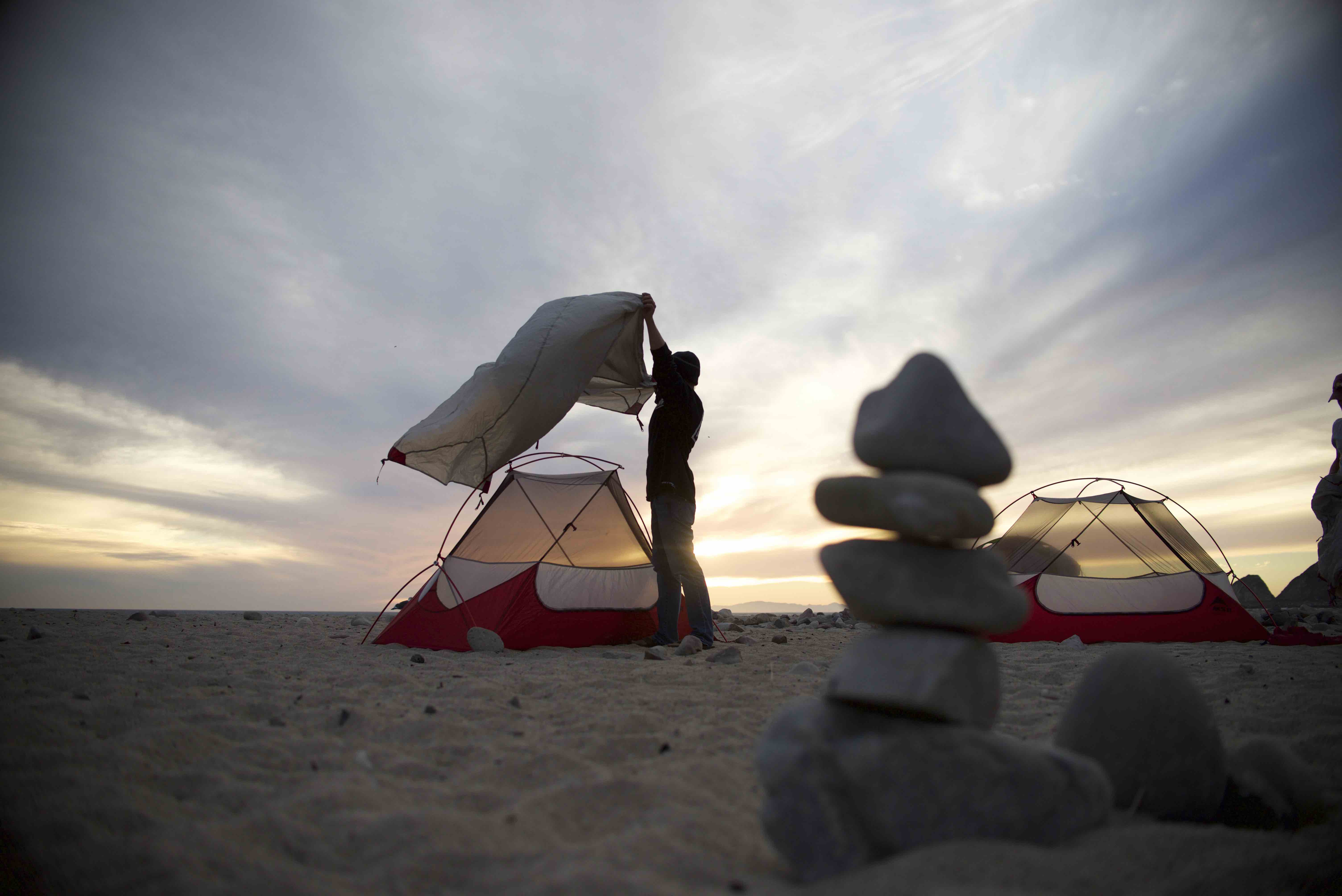 On 16 March, 2016, a little hungover from St Patrick’s Day, the twins embarked on their seven-month journey, setting off from Ketchikan, Alaska. They had about 70 pounds worth of tent, food, clothes and camera equipment strapped to their boards, as well as a stack of nautical maps to guide them from one day to the next. They planned out their route so they could stop for supplies in towns along the coast, spending most nights camped out on beaches or banks – unless they were picked up by kind strangers.

To get through the journey, Ryan and Casey were forced to live in the present. “You just have to compartmentalise each day, because if you think ahead it seems insurmountable,” Ryan says. With no sponsors, no guide and no backup, the twins documented their adventures with a GoPro and a Canon 7D-Mark II, taking turns to film their exploits.

Their lowest moments often intertwined with the highest. One example is their passing through Columbia Bar, an expansive, volatile patch of water that spans the states of Oregon and Washington. Many locals have lost loved ones to the waters and, having sunk over 200 ships, has come to be known as the ‘Graveyard of the Pacific’.

The locals’ warnings deeply affected Casey. “I was certain I was going to die… I kind of accepted it. But I was so committed I’d already decided to do it. My mindset was like, ‘Okay, I’m gonna die. But let’s go.’” That evening, after they’d made it safely to shore exhausted and euphoric, Casey knew he’d pushed his psychological boundaries to their absolute limit. 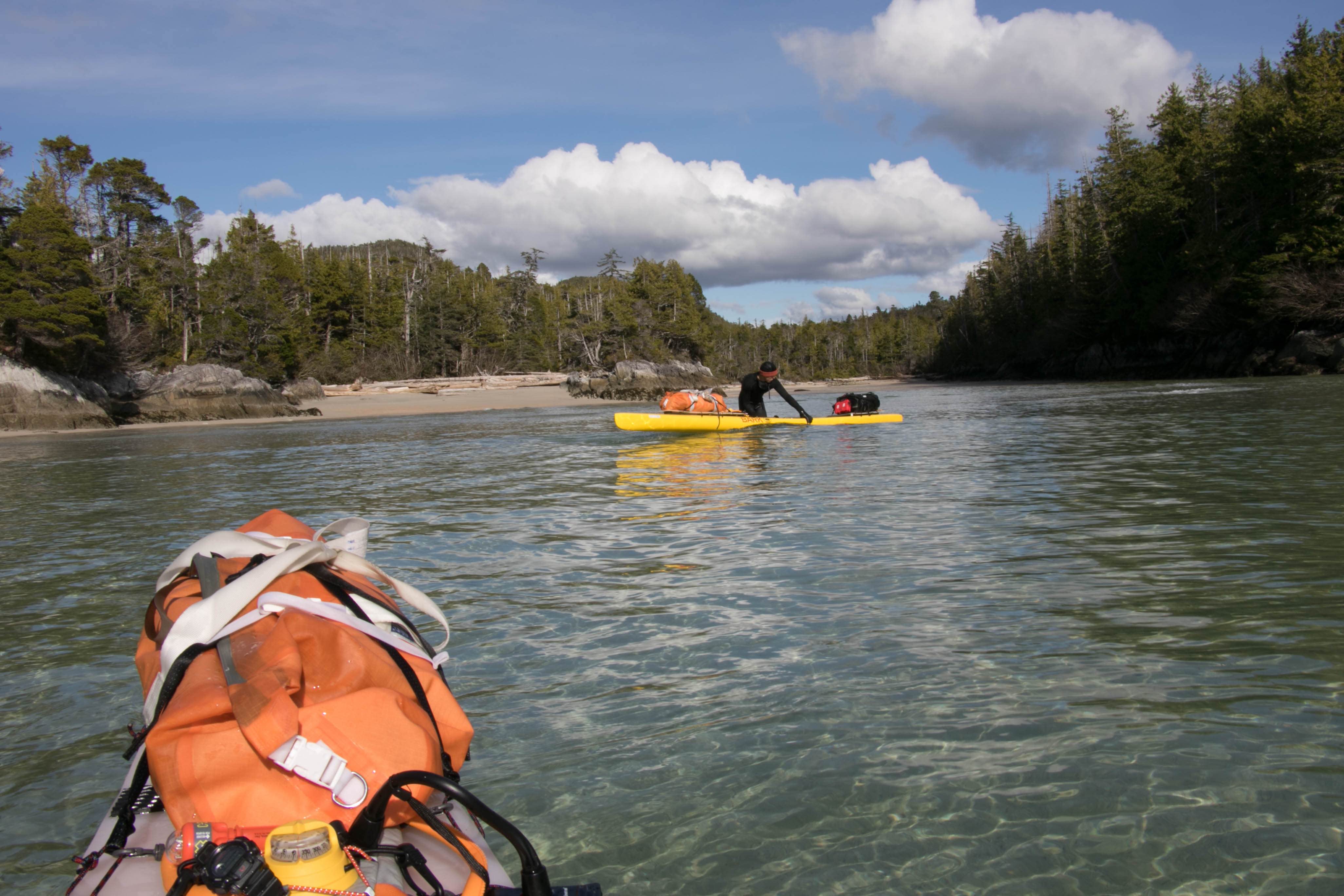 The twins made sure to capture the profane along with the profound. When they hit Southern California, Ryan couldn’t resist getting a breakfast burrito and coffee most mornings, even though he’d usually vomit it up on his board a few hours later. Never missing an opportunity to appall his brother, he would leave the puke in his beard all day – “just to fuck with Casey”.

The moments they documented make up By Hand, a new film by Kellen Keene showing in select cinemas throughout 2020. The premiere is taking place in a local Santa Barbara cinema this month, while the twins have entered the film into various festivals across the world. It follows them and their “never-quit mentality” as they navigate the highs and lows of their colossal journey.

Its upcoming release sees Ryan and Casey in a reflective mood today. For them, they say, the most challenging moment of all was when their journey ended. “Once we finished I felt pretty melancholic,” Ryan says. “You have this big goal that you’re striving for, and every day you have these micro goals that seem purposeful. You solve all these problems, overcome all these challenges, and then all of a sudden it’s over. I didn’t know how to find that much meaning in my life outside of that.” (So as soon as their first trip ended they started planning their second and, in 2017, paddled 1,100 miles along the Pacific Coast of Baja.) 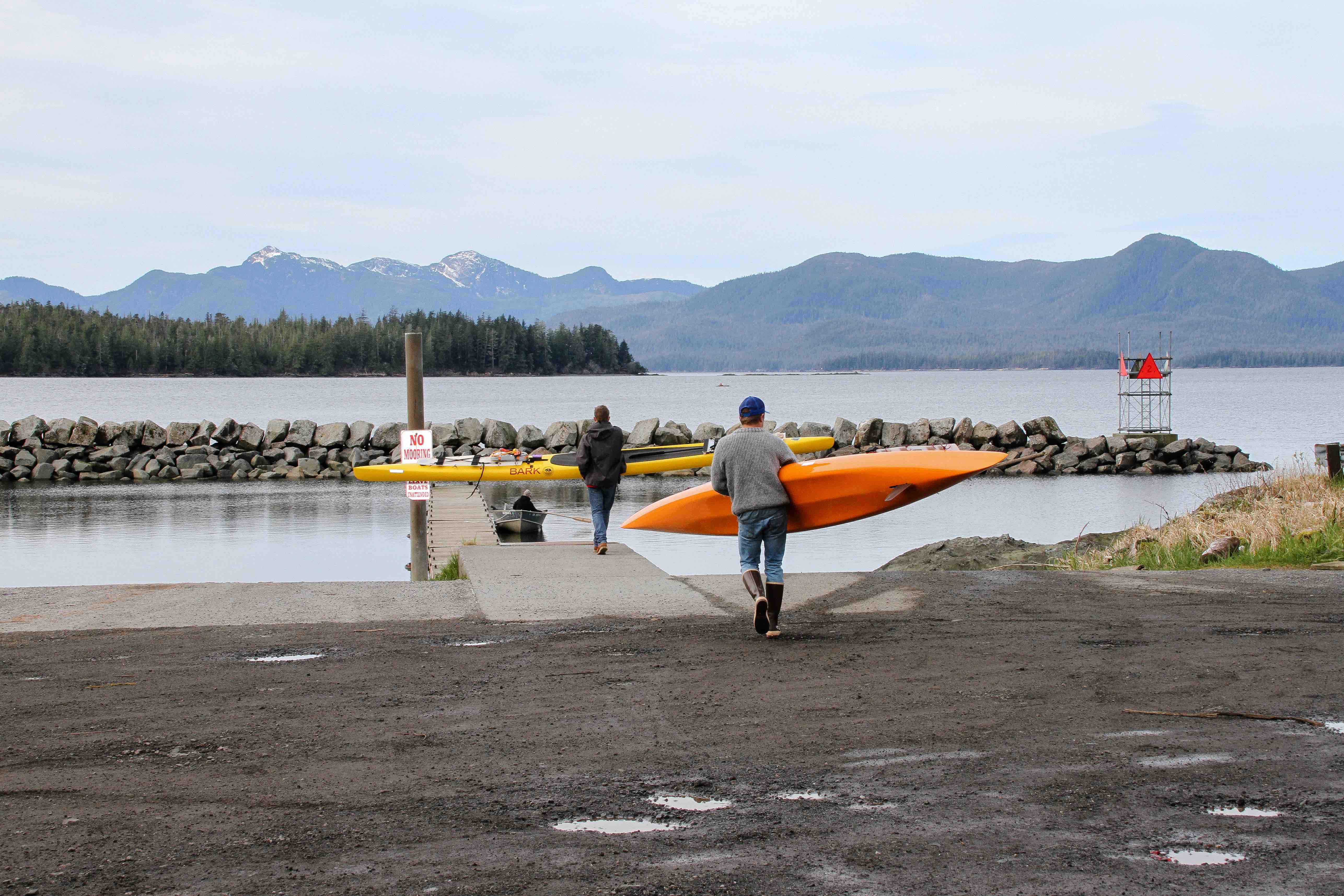 In that sense, then, perhaps the best thing about being a Higginbotham twin is the instilled sense of self-belief. “I don’t know if it’s nature or nurture, but I don’t feel like there’s anything I can’t do,” Ryan says.

“Hopefully that’s what people will get from the film,” adds Casey. “Even if it’s just to test their limits for the weekend. I hope they just pack their shit up and go.”

By Hand, a film by Kellen Keene featuring Ryan and Casey Higginbotham, will be premiering in selected cinemas throughout 2020. Follow the twins on Instagram for updates on their online release date.

Linkedin
RELATED ARTICLES
OTHER ARTICLES
Photographer Sean Maung reflects on documenting a small town in Pennsylvania afflicted by high levels of unemployment, poverty, violence, crime, and addiction.
After a two-year hiatus and a new album, the Nigerian artist is riding high. Now, he wants to bring his alternative, genre-bending sound to the world.
Campaigners reflect on what the supreme court’s decision to allow buffer zones in NI means for the future of reproductive rights in the UK.
Zsófia Sivák’s ongoing project documents the country’s tavern culture, preserving a once defining part of rural life.
A group of aid workers face prison for helping to save people fleeing their homes at sea. If they are charged, it will have a chilling effect on humanitarian efforts.
A new podcast is opening up the conversation between trans women and trans amorous men in the hope of building coalitions.