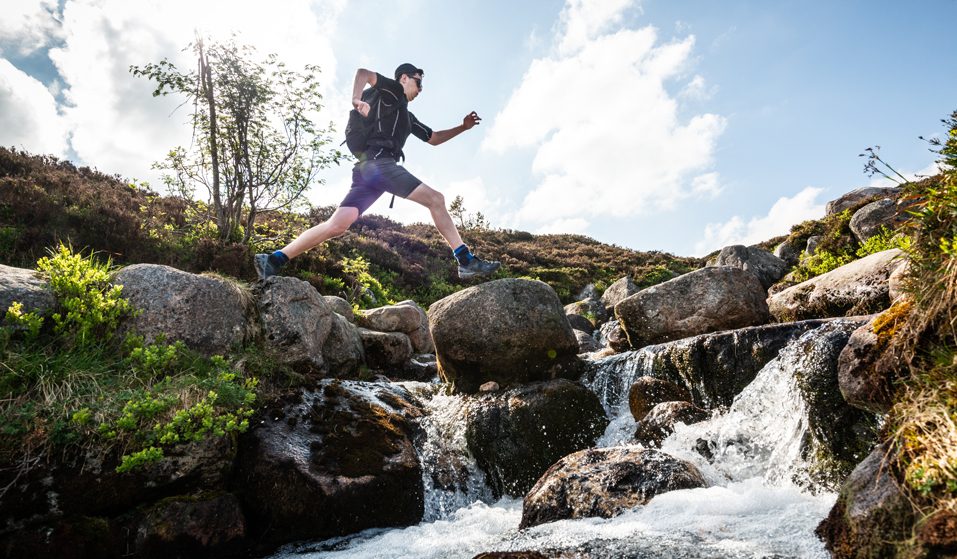 There are 282 mountains standing over 3,000ft in height across Scotland. Every time you climb one, you've 'bagged' a Munro... and some people are determined to conquer them all.

There are 282 mountains standing over 3,000ft in height across Scotland. Every time you climb one, you've 'bagged' a Munro... and some people are determined to conquer them all.

At the foot of Cairngorm Mountain, a popular skiing spot in the Scottish Highlands, a funicular railway takes people 400 vertical metres up – a head start for anyone looking to trek towards its summit as quickly as possible. But in the world of Munro bagging, this would be cheating.

Cairngorm is one of 282 mountains that extend above 3,000ft (914m) across Scotland. They’re named ‘Munros’ after Sir Hugh Munro, who first catalogued them in a list published back in 1891. Then it became a ‘thing’.

Within a decade, people started trying to hike every single one of them – giving rise to a subculture that endures to this day. 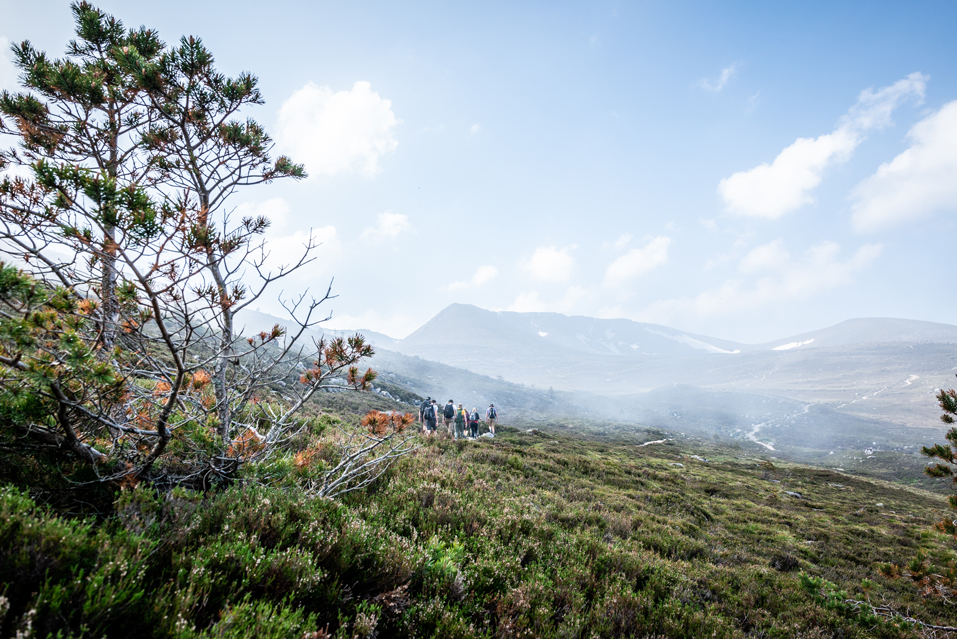 It’s a simple enough concept – when you hit a summit, you’ve ‘bagged a Munro’ – with a clear appeal. If you take the temperate landscape of rolling hills, winding streams and dramatic panoramas, then add the promise of accomplishment that comes with such a massive challenge, you’ve got a completist’s dream adventure.

But it’s much easier said than done. There are more than 50 Munros to walk in the Cairngorms National Park alone and even on an entry level one like Cairngorm itself, the weather conditions can change dramatically at any time, the sight of snow stubbornly sticking to mountainsides all year-round. 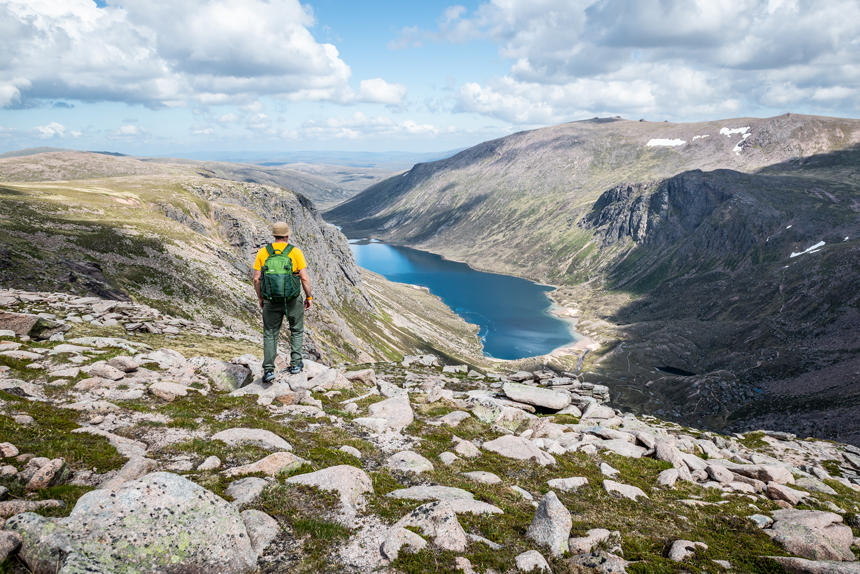 You could be wearing shades and a sweat-drenched t-shirt on a warm summer day… until mist begins to roll in and it’s time for a hat and jacket. When things really take a turn, you could be shivering within 10 minutes and feeling the effects of hypothermia within an hour.

Yet beyond the unpredictable conditions, this picturesque scenery comes with a slew of less-than-obvious dangers. There are 20 fatalities a year on average in the Scottish highlands – 10 people died within the first three months of this year alone – emphasising the need for positive decision-making across a variety of areas.

On an unseasonal afternoon, not so long ago, Mountaineering Scotland’s Heather Morning stopped for a break beneath the ‘Great Slab’ of Coire an Lochain. Heather is a no-nonsense safety adviser with a lifetime of mountain experience, often accompanied by Millie, a 12-year-old search-and-rescue dog who has seen it all. 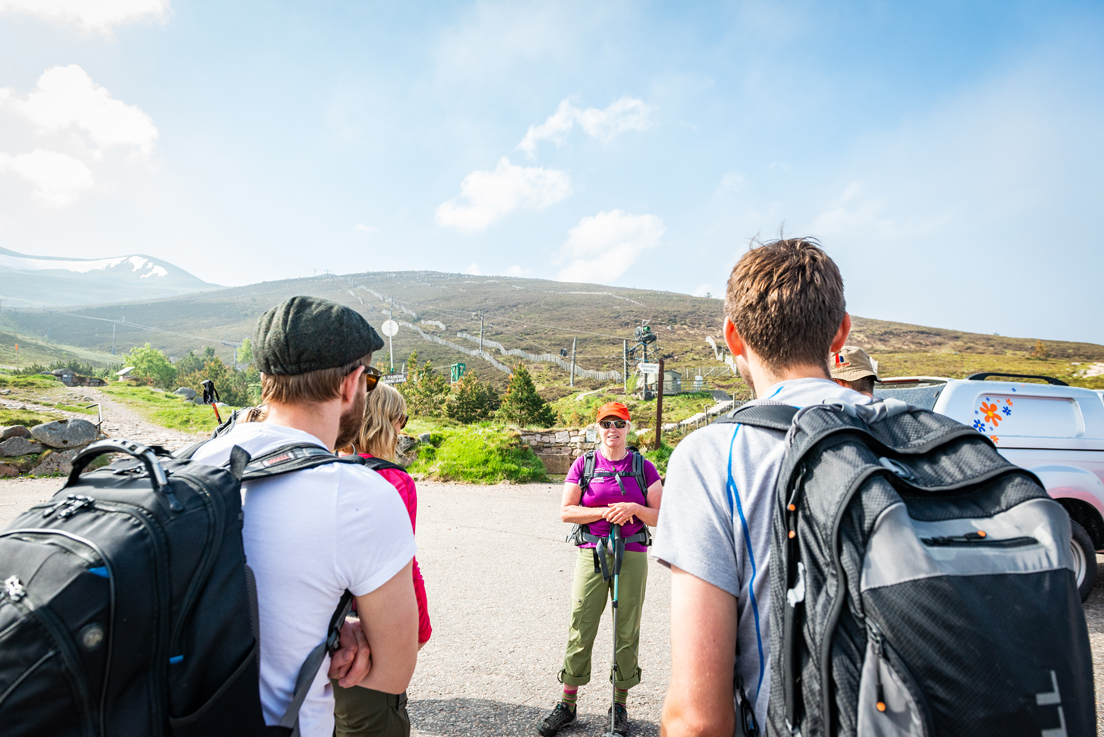 Dressed in a purple t-shirt and green walking trousers, Heather opened up her backpack and started talking through her kit essentials: from a packet of Colin the Caterpillar sweets (for energy) to an emergency huddle tent (for group shelter).

Heather was guiding a group of journalists on a two-day hike through the highlands – snaking through hills littered with reindeer poo, following trails signposted by heaps of rocks piled by fellow hikers, eventually reaching the top of second highest peak in the UK, Ben Macdui – all as part of a campaign sponsored by outdoor brand Merrell.

It took Heather more than 20 years to bag every Munro – something that only 6,095 people have managed to do since 1901 – and she knows all there is to know about mountain survival. Here are her tips for anyone thinking of giving it a try. 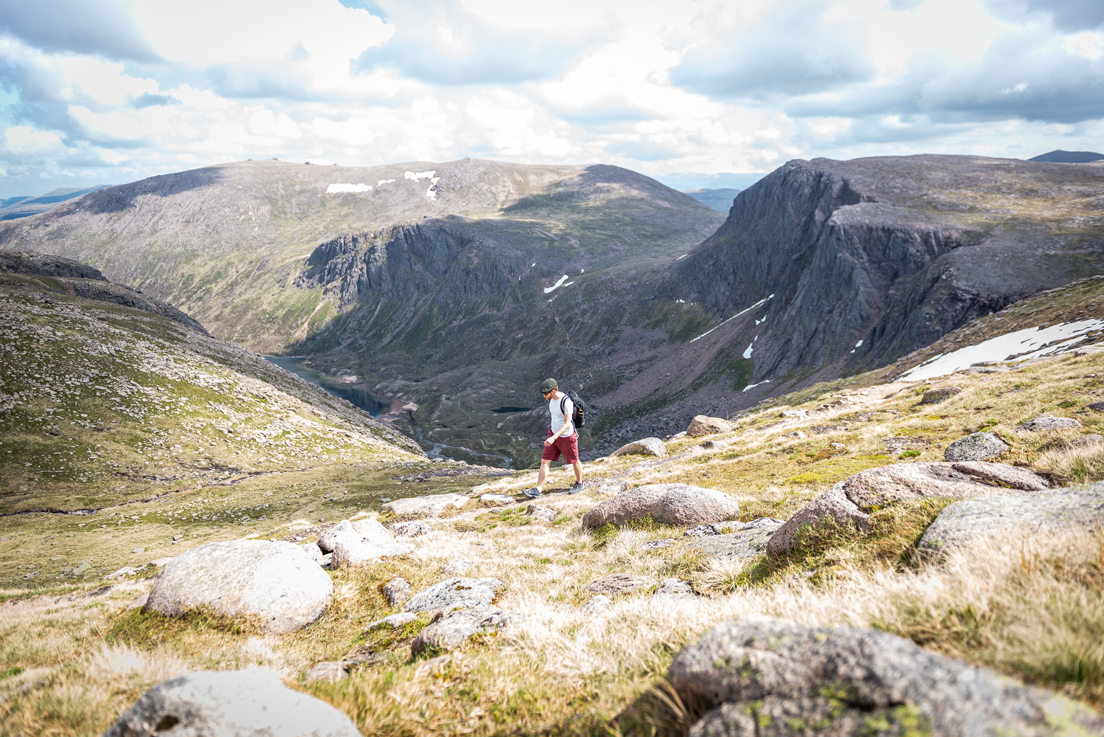 “I think because Munro bagging is effectively just walking – putting one foot in front of the other – it’s perceived as being a lot easier than it actually is. There’ve been a couple of rescues recently here in the Cairngorms where, in both cases, a group of two people were trying to navigate with a mobile phone – and the phone died because the battery was in a cold climate.

“I think we’re seeing an over reliance on modern technology, forsaking traditional map and compass skills. A phone should always be the backup option, in my opinion, rather than the other way around.” 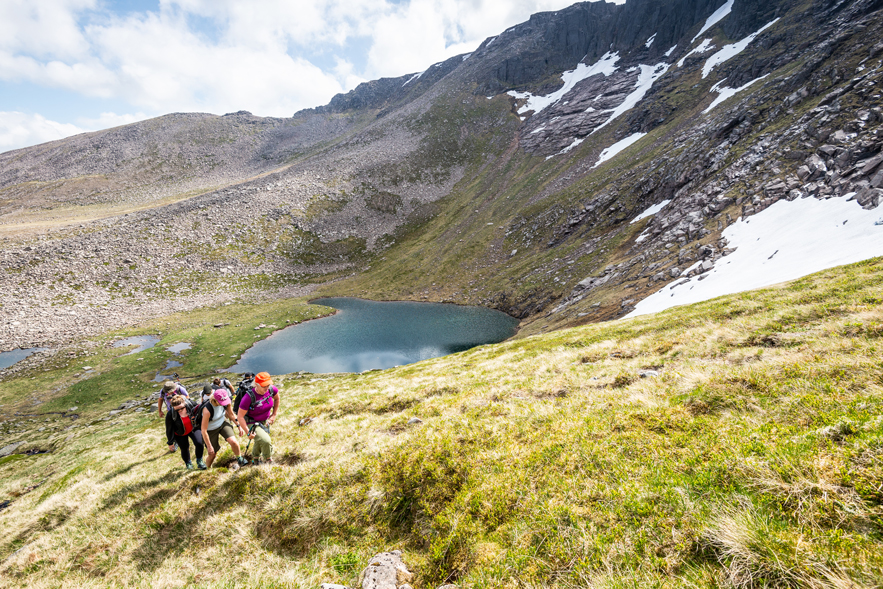 Find the right route for you… and stick to it

“A big issue is getting onto terrain that you probably shouldn’t be on, then slipping or falling. When you look at the accidents stats, about 25 per cent of the fatalities are directly attributable to someone taking a slip in the wrong place. You avoid that by sticking to the recommended routes.

“Our website has a section on getting started. It suggests some easier, more accessible hills – the roly poly kind that have good tracks and keep you away from any gnarly, steep ground, which can be very technical and involve scrambling with difficult navigation. 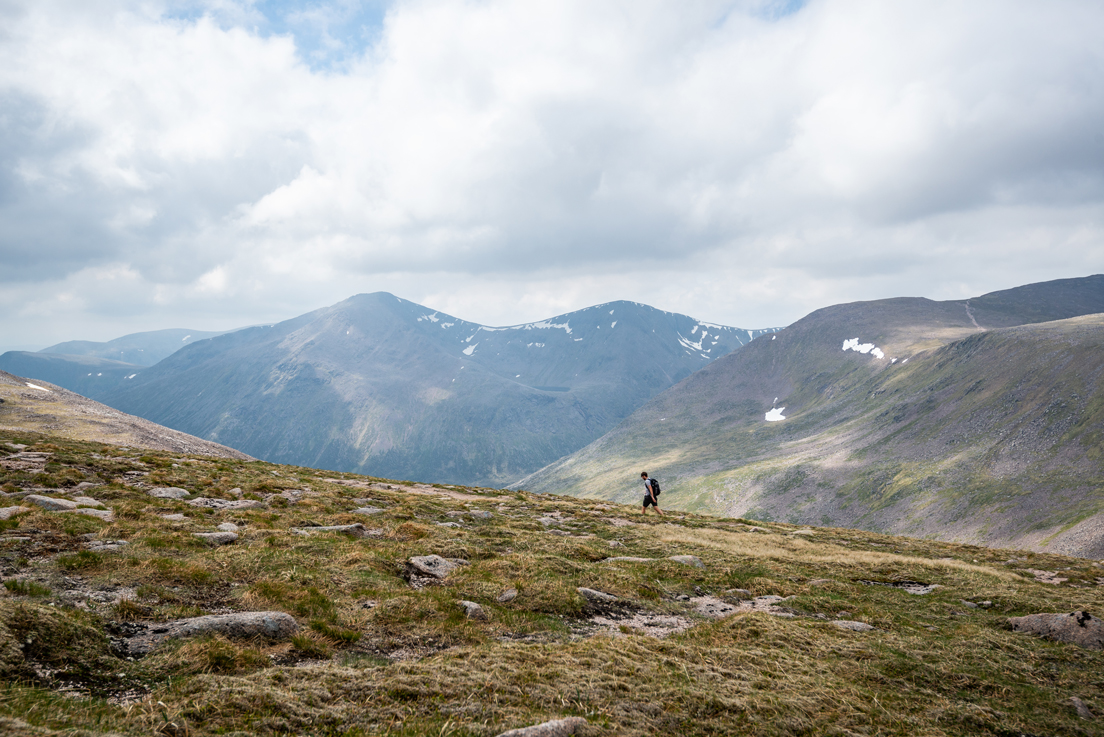 “Some are definitely much easier than others, but so much depends on the conditions. In good weather, you could wander across the Cairngorm plateau with a pair of trainers and a t-shirt, and get away with it.

“If there’s snow on the ground, it adds whole other dimension to the safety and skill aspects that you need – particularly if there’s the hard snow we call Névé, which is very slippy – as well as having to bring special equipment like crampons and an ice axe.” 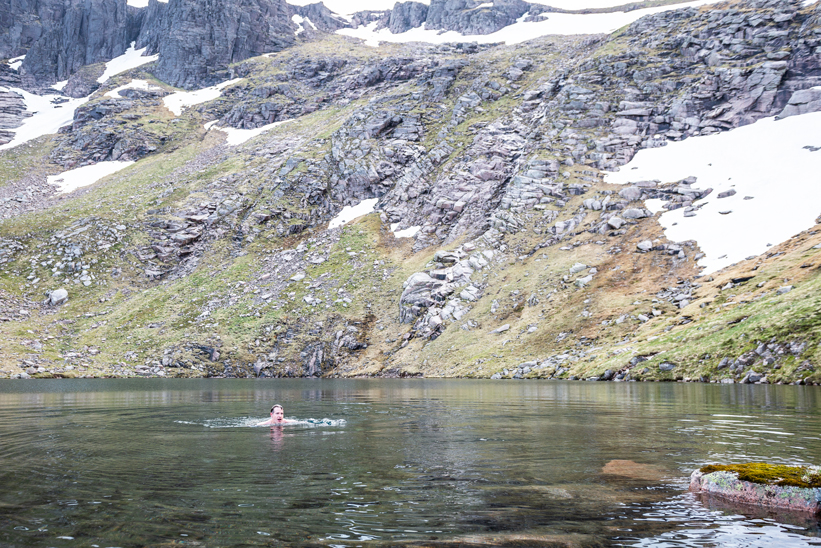 “Boots have season ratings and some are only meant for specific environments. If you’re just getting into hill walking and looking to go in summer conditions, you can convey that in a local outdoor shop and find the right pair of walking boots, whether they’re made of fabric or leather.

“A lot of hills can be quite hard work and rough underfoot, so it’s handy to have ankle support if you’re not necessarily on constructed paths. When it’s dry and you’re on even terrain, a standard boot might be brilliant. But as soon as you’re knee-high in boggy vegetation, for instance, that same boot might be hopeless.” 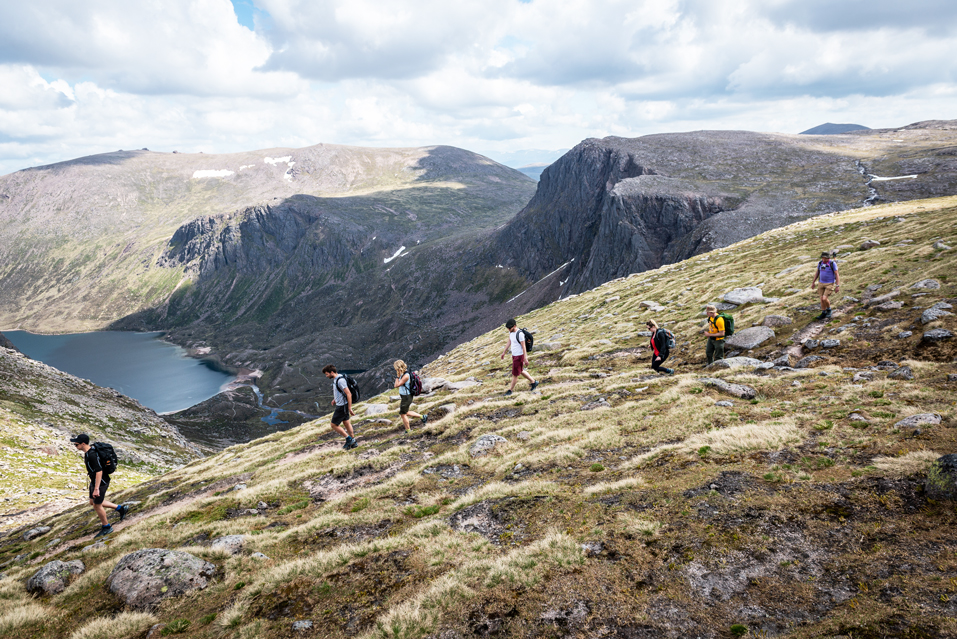 Learn how to navigate

“When you look at the statistics of why people get into difficulties, the biggest thing is navigation or being caught unprepared in terms of having the right kit. For example, not keeping a map in a map case, so it gets wet, or worse: not even having a map at all.

“There’s a really good website called Walk Highlands. Most people who head off into the Munros will either use that or one of the official Munro guides. If people are engaged with that, they will get a decent idea of how long it would take to do one of the mountains: on an average day you’ll probably be out for six to eight hours. The failure comes when people don’t engage with the information that’s available.

“For anyone starting out and wanting to do the Munros, I’d recommend signing up to a navigation course. Invest a bit of money into developing some skills before you put yourself in an environment where it really matters.” 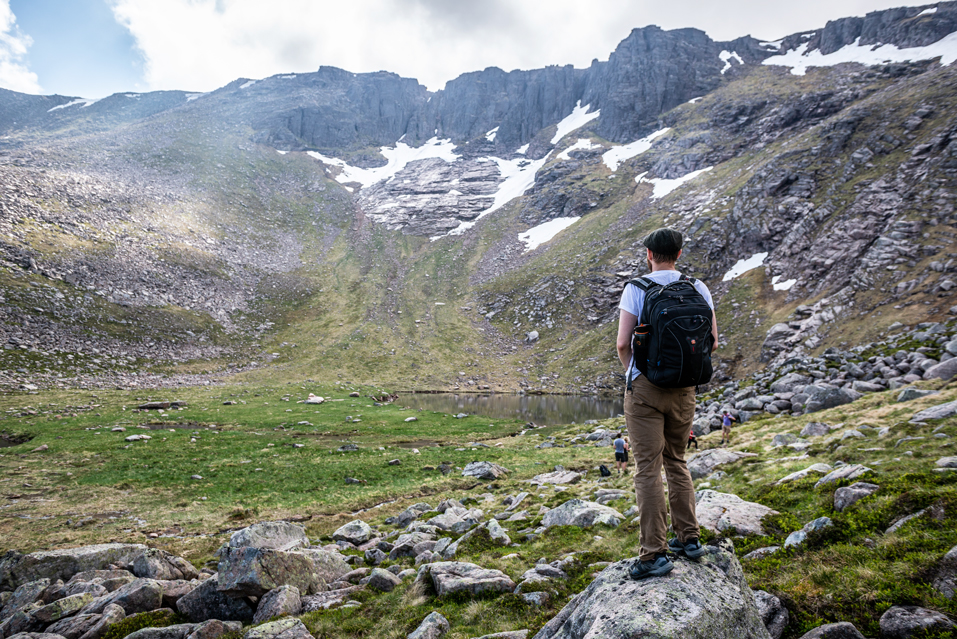 There’s a strong culture within the mountains. Everyone you meet is really friendly. When you pass somebody, you are expected to speak to them and maybe pass the time of day. But more importantly, there are clear ethics regarding littering and leaving no trace behind. It’s important to keep the place pure.

Merrell UK are proud to support Munro Bagging in association with the MQM collection.

Linkedin
RELATED ARTICLES
OTHER ARTICLES
The idea that a younger generation is abandoning work has become a popular narrative online, but it doesn’t necessarily reflect reality.
For over a decade, gamblers have won big by employing people to place live bets from the court. But does this dubious method still work?
Yesterday thousands gathered outside Buckingham Palace after news of the Queen’s death broke.
Rhiannon Adam spent three months capturing an ageing society wracked by division, isolation, and the aftermath of scandal.
Birdy Chu reflects on documenting the historic moment in which the territory was formally passed back from the UK to China.
Thousands attended the annual event this year to wheelie through the city and call for ‘knives down, bikes up’.