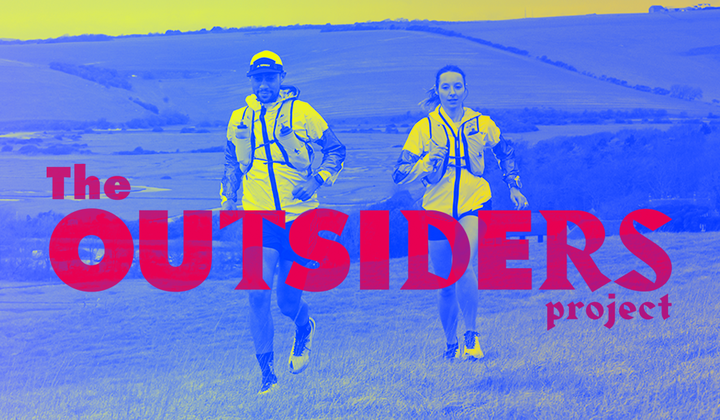 It’s a milky white, hazy morning in England’s South Downs National Park. Two figures are negotiating the chalk trails that climb up to the totemic clifftops. They are running in high-vis tech gear, their movements flowing against the backdrop of the sky sea and white cliff. Their silhouettes seem somehow different. Rachel Dench and Simbarashe Mugomba are trail runners. But they don’t look like the trail runners you usually see under the open sky of these islands.

“Running trails proved to me that I could do things again,” says personal trainer Rachel. “Getting my pack on and covering miles and miles out there with no one to rely on but myself was a big boost to my confidence.” Rachel is possessed of a direct, open kind of intelligence. She laughs easily, and there is passion in the way she addresses the issues in front of her: a passion that hints at complexity (almost) overcome. “I had lost my way for a while,” she tells me. “Learning to get out there and navigate in the hills was a tangible skill that emerged through running trails. Running trails gave me a way back to myself.”

Rachel and Simbarashe are core members of Black Trail Runners (BTR) – a growing and dynamic collective who came together in 2020 determined to address the lack of visibility and representation of people of colour in the outdoors. In the conservative world of British outdoor culture, there is a perceived power of the open sky to neutralise difference. “Quite often, when subjects like this are raised, white people will say: ‘Surely anybody can go on the trails’, ‘What is the problem?’ ‘The trails aren’t racist,’” Simbareshe says. “This shows a fundamental misunderstanding about the way that race actually affects our lives.” 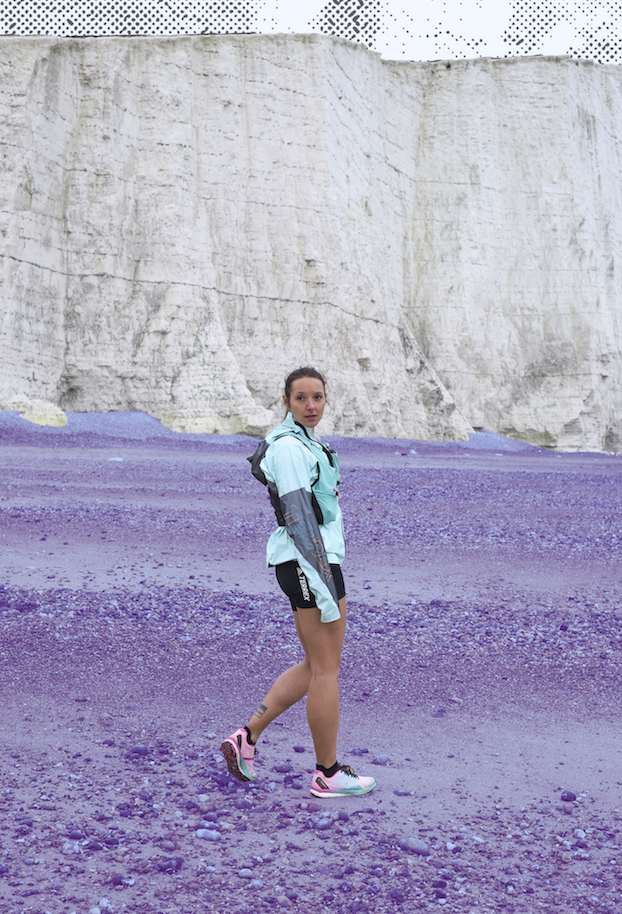 The 31-year-old City accountant grew up in Wiltshire and grew up running local trails. “Trail running wasn’t really a well organised or visible culture or scene when I was training for other sports – so I never realised that I was doing it anyway,” he remembers. Simba is competitive, focused, and full of the grit necessary to run big distances through mountains. “It was only actually when I went to big trail running events in other parts of the country that I realised there was a problem,” he explains. “It made me realise that I was actually quite lucky as a kid –  I didn’t feel like there had been a barrier to entry for me into trail running, even though there was. When you look back with wiser, older eyes you become more aware of what happened, and what was happening around you…”

Rachel, Simba and the BTR collective have been collaborating with adidas Terrex, helping to train up members to become qualified trail coaches. “It is really important that brands don’t just succumb to tokenism,” Rachel points out. “It would be really easy for brands to co-opt a wave of feeling because of the BLM movement. But by collaborating with adidas Terrex, people of colour are learning to become role models to encourage people who look like them to get out there on the trails. It’s important. You can’t be what you can’t see.”

“To a lot of people I present as white,” says Rachel. “I am the lightest-skinned person in my family. A lot of bi-racial people feel as if they are neither here nor there. It feels as if you aren’t in either camp – and it can be quite a culturally confusing place to be.” Rachel was born in 1984 and grew up in suburban North West London, at the furthest extension of the Metropolitan Line. “It was a sleepy place, endless suburbs, neat little houses and gardens,” she remembers. “We were the only Black family we knew.” Rachel’s mum is Black Jamaican and came to England in the 1970s. Her dad is white British. “My brothers are much darker-skinned than I am – I am the ‘white sheep’ of the family”, she says. “I have been in groups of people, including out there on the trail, who say things that they would never say if they were in front of people of colour. It feels as if I have somehow infiltrated the ‘white’ group, as if I am some kind of spy.”

We are running close to the chalk-white cliffs that buttress England’s southeastern coastline. They are potent symbols. Writers from Shakespeare onwards have employed their imagery to symbolise the edge lands of English identity. And of all the powerful tropes of meaning and landscape, they are among the most emotive. They have been used to sell a one-dimensional idea of Englishness – employed exploitatively to hawk everything from Land Rovers to Lard – not to mention, an exceptionalist island mentality and the red white and blue aesthetic engendered by Brexit.

If at times their presence has been harnessed to evoke a darker, more ambiguous counterpoint, here and now, one thing remains certain. The trope of the  Black person running through this landscape does not really exist. The facts underline the glaring lack of diversity out there in the hills, the crags and the coastlines of these islands. In a recent survey conducted by the British National Parks Authority, though people of Black Asian Minority Ethnic communities account for 14 per cent of the UK population, only 1 per cent of visitors identify as BAME. “It’s a shocking statistic,” says Rachel “…if it’s really true that the environment is for everyone, it’s also a damning truth that so few people from the Black and brown communities of this country feel as if they belong in the landscape.”

The reasons for this are many, various and difficult to pull apart. Underpinning the situation are stark facts as well as historical realities. “It’s this idea of co-ownership we need to explore,” explains Simbarashe. “People say about trail running that all you need is a pair of shoes and you can get outside, but it’s more than that,” he continues. “People have to realise that there are barriers to entry to the countryside, because people don’t feel welcome, and they don’t feel welcome because other people don’t make them feel welcome.” 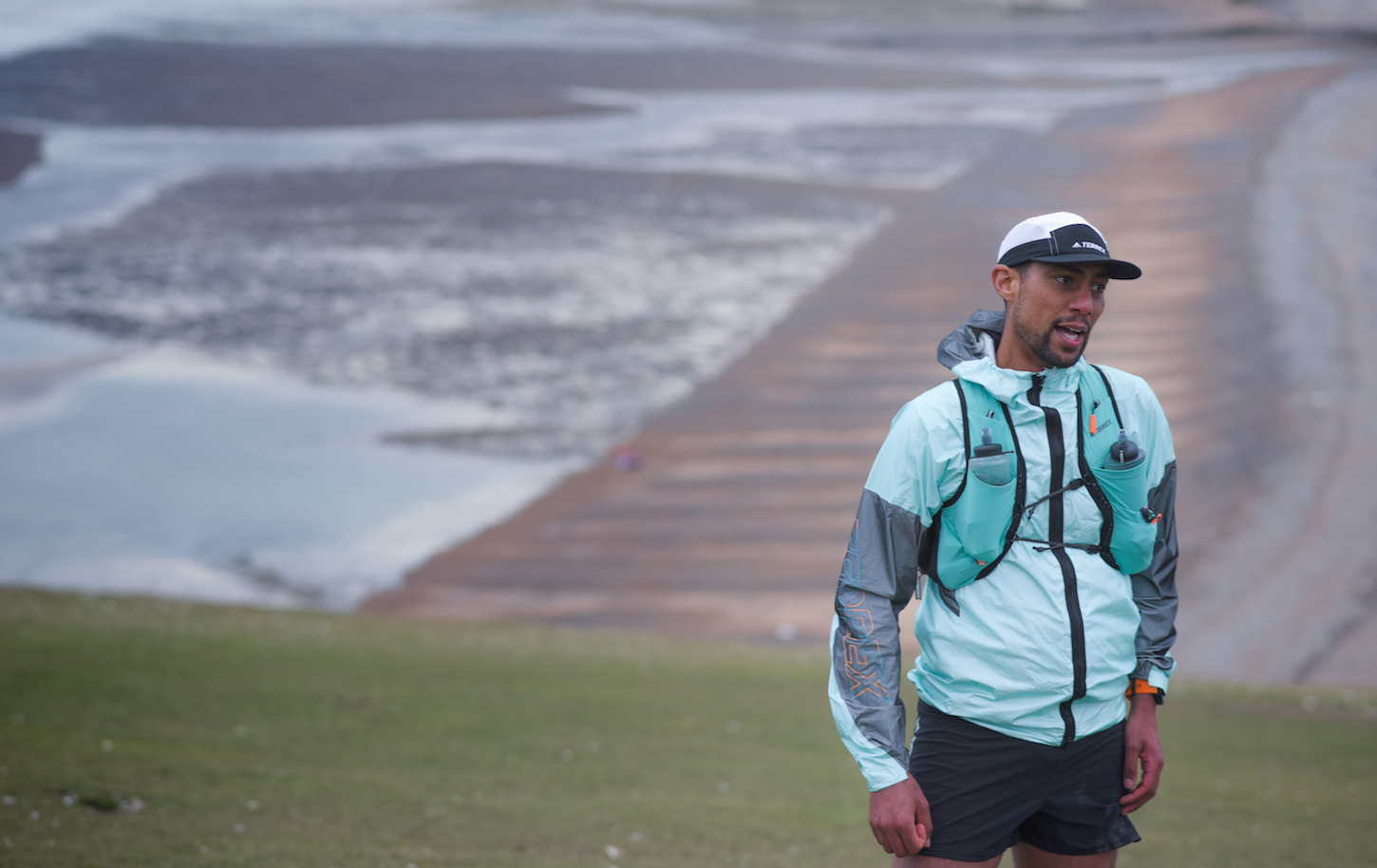 Black and brown people in this country live overwhelmingly in only three very densely populated urban areas. In fact, a recent ONS survey confirmed that people who identify as BAME are seven times more likely to live in an urban area than people who identify as ‘white British’. “The problem is one of access, knowledge and representation,” says Simbarashe. “If we as a community can address the visibility and representation of people who look like us in the outdoors, it might help so many of the historical scars to do with Empire and Colonialism, that make the situation in Britain so specific.”

Historically, spaces like The Downs and other National Parks in Britain have been racialised, so it’s been difficult for people of colour to physically access the outdoors. “The way that the culture of outdoor sports has been communicated has been so rooted in the language of conquest, broadcast in terms of dominance and achievement and packaged fundamentally as a very conservative, very exclusive place populated by middle-class white people, usually with beards. We want to change that.”

Whether or not the trails are actually open to anyone is an increasingly moot point. There is powerful blowback from people in the mainstream and on social media every time the issue of diversity and inclusion is mentioned in the context of outdoor sports. “The common perception – or at least one that is very current, is that there are no physical barriers out there,” says Simbarashe. “There’s no one racially profiling you and telling you that you can’t do what you like – but of course, that’s a big difference from a reality that exists, where there are always looks, and casually dropped remarks that folks that look like me aren’t usual, and the implication is that we somehow don’t belong.” 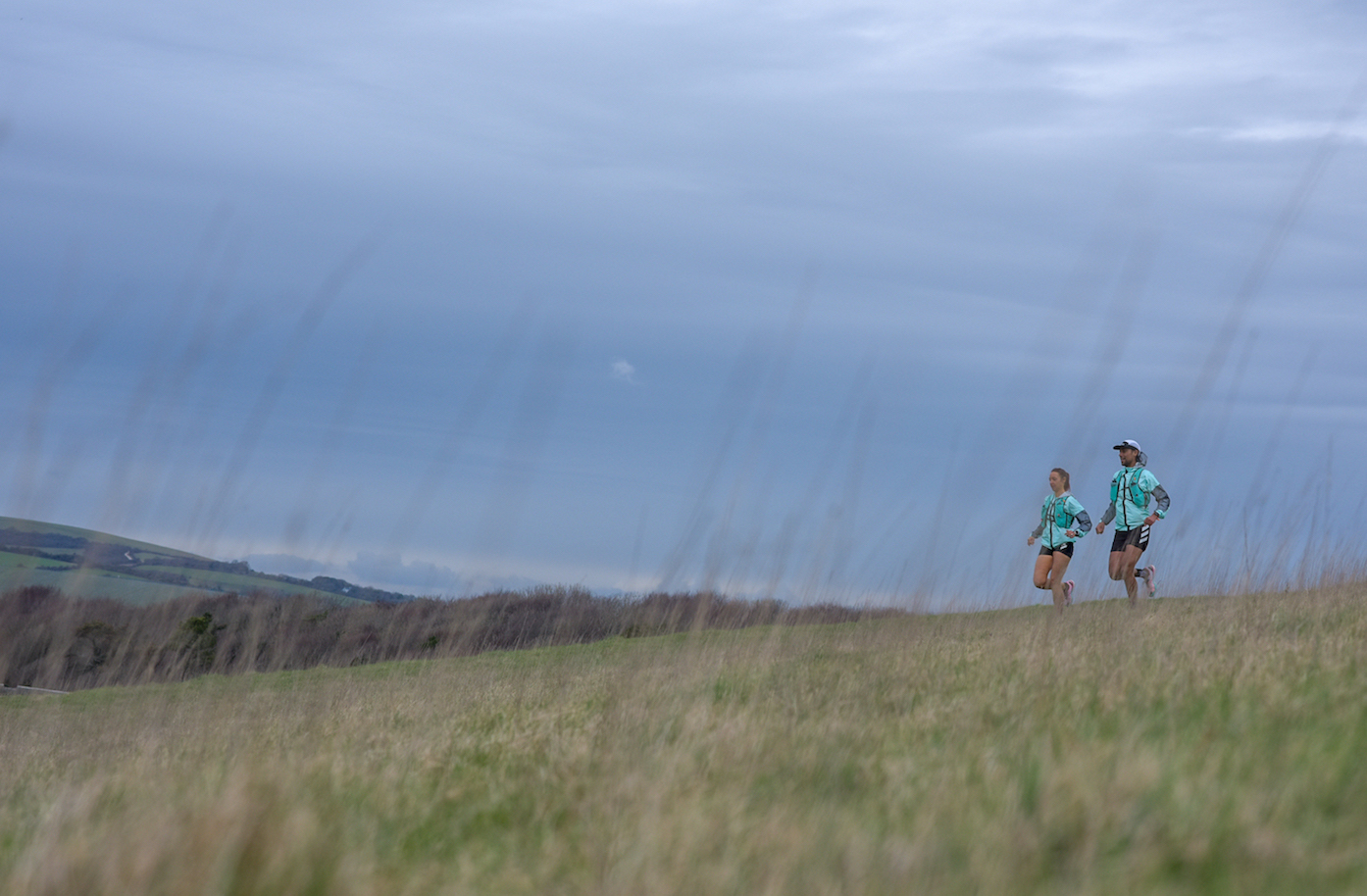 Rachel agrees: “People say the trails are for everyone. But yes, trails are public, but often these trails are hard-won rights of way through private properties and in many cases these properties were built up and this wealth accumulated through the proceeds of empire and colonialism and slavery.” The reality exists: hard-won rights of way throughout England have been rallied for and won back since the acts of enclosure – and trespass laws are still potent tools of coercion, and it is impossible to separate the physicality of these islands with their colonial history. For a person of colour to be traversing these landscapes is, whether we like it or not, is a statement of renewed ownership and of empowered assertion of a right to exist in the here and now.

At the end of a beautiful morning, we drill down on just why it is so important that more of us feel we have the right to be out on the trail. “The reality is that getting out there under the open sky, getting inside your head and exploring what’s in there – that’s the beauty of running trails,” says Simbarashe, gathering his gear and suiting up for the afternoon session. “If you can improve your times you improve yourself in the process. That’s a huge benefit. And it’s the kind of benefit that should be available to everyone.”

adidas Terrex are supporting Black Trail Runners to create pathways for new and established trail runners of all abilities.

Linkedin
RELATED ARTICLES
OTHER ARTICLES
Why has there been a failure among some leftist groups to look inwards at the cultures they may be perpetrating?
Kiana Hayeri first travelled to the capital of Bosnia and Herzegovina in 2013, and has since documented the city’s complex social landscape.
Moufid Taleb dreamed of Arctic adventure as a child, but he never imagined it was something he’d ever do himself. Now, with a successful trip to Swedish Lapland under his belt, he plans to traverse Greenland in 2022. His message for young people is that this can be their reality, too.
A new exhibition celebrates the photographer‘s early work, and shows his unwavering commitment to capturing the complexities of Black life across America.
The first-time director discusses her new high-octave panic of a movie about a young bisexual Jewish woman, portrayed by Rachel Sennott, who runs into her sugar daddy at a shiva.
In her new book, writer and researcher Amelia Horgan explores the many problems facing workers today and why fixing them will mean radically changing the very foundations of society.