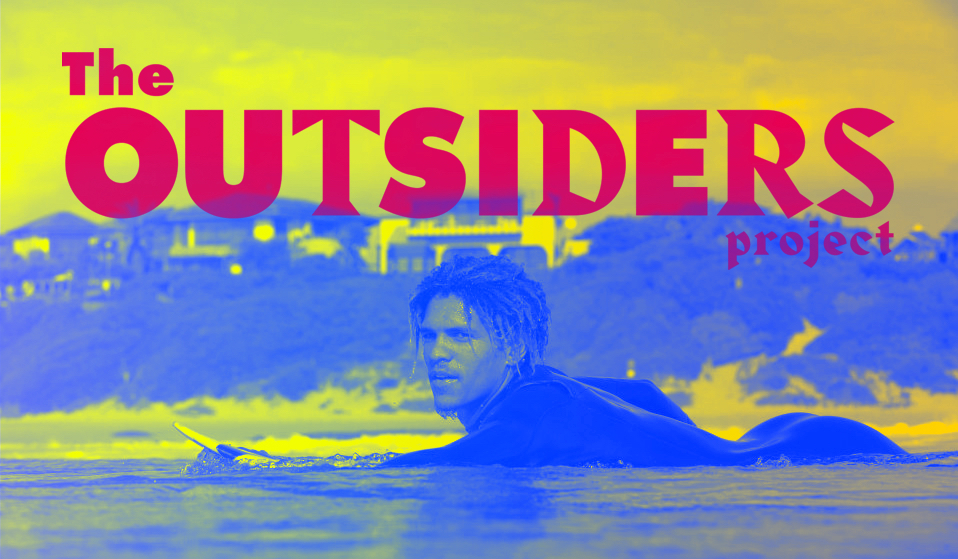 The 21-year-old is one of the most talented wave-riders in the world today. This is his journey – in his own words.

The 21-year-old is one of the most talented competitive wave-riders in the world today. This is his journey – in his own words.

Joshe Faulkner is one of the most talented competitive surfers in the world today.

The 21-year-old South African was born and raised in the township of Pellsrus, right next to Jeffrey’s Bay – a town blessed with one of the most dynamic, consistent and totemic right-hand point breaks on the planet.

But despite the fact that J-Bay is his backyard, and that Southern Africa is surrounded on all quarters by an ocean bountiful in waves, the challenges that Joshe has had to overcome in surfing are plentiful. For many others like him, these hurdles remain steadfast.

In an extract from the forthcoming book AFROSURF, Joshe recalls how wave-riding saved him from taking the wrong path, and explains why he thinks that change is on the horizon when it comes to surfing in SA.

“My cousins, Bertie Stuurman and Dominiquåe Abersalie were surfers. Whenever we came home from school, we’d see them grab their boards and go surfing. Etienne Venter, owner of the local surf school in J-Bay, would take Bertie and Dominique to all the local surf comps. Bertie was a really good surfer. So they would often come home with trophies and we were like, ‘Yoh this is sick!’ One day after begging Etienne to take us surfing he obliged and he took me, Jerry, Angelo and Rewaldo and that’s how we all started surfing. We loved it so much, we wanted to come home with trophies just like Bertie and Dominique. We were inspired to become good surfers from day one.

“Thys Strydom is the owner of Rebel Surfboards and he took us under his wing. From the age of 11 years old, Thys started giving us boards. We’d go to his factory after school every day just to hang out. The whole crew of us Jerry, Angelo, Rewaldo, Dillen Hendricks, we’d all just chill at his factory and surf all day. Thys would take us on surf camps, pile all of us into his bakkie and take us to all the surf contests. He made sure we went to church on Sundays and he made us proper boards. I used to stay with him on weekends and he became almost like a father figure to me. He did a lot for me. 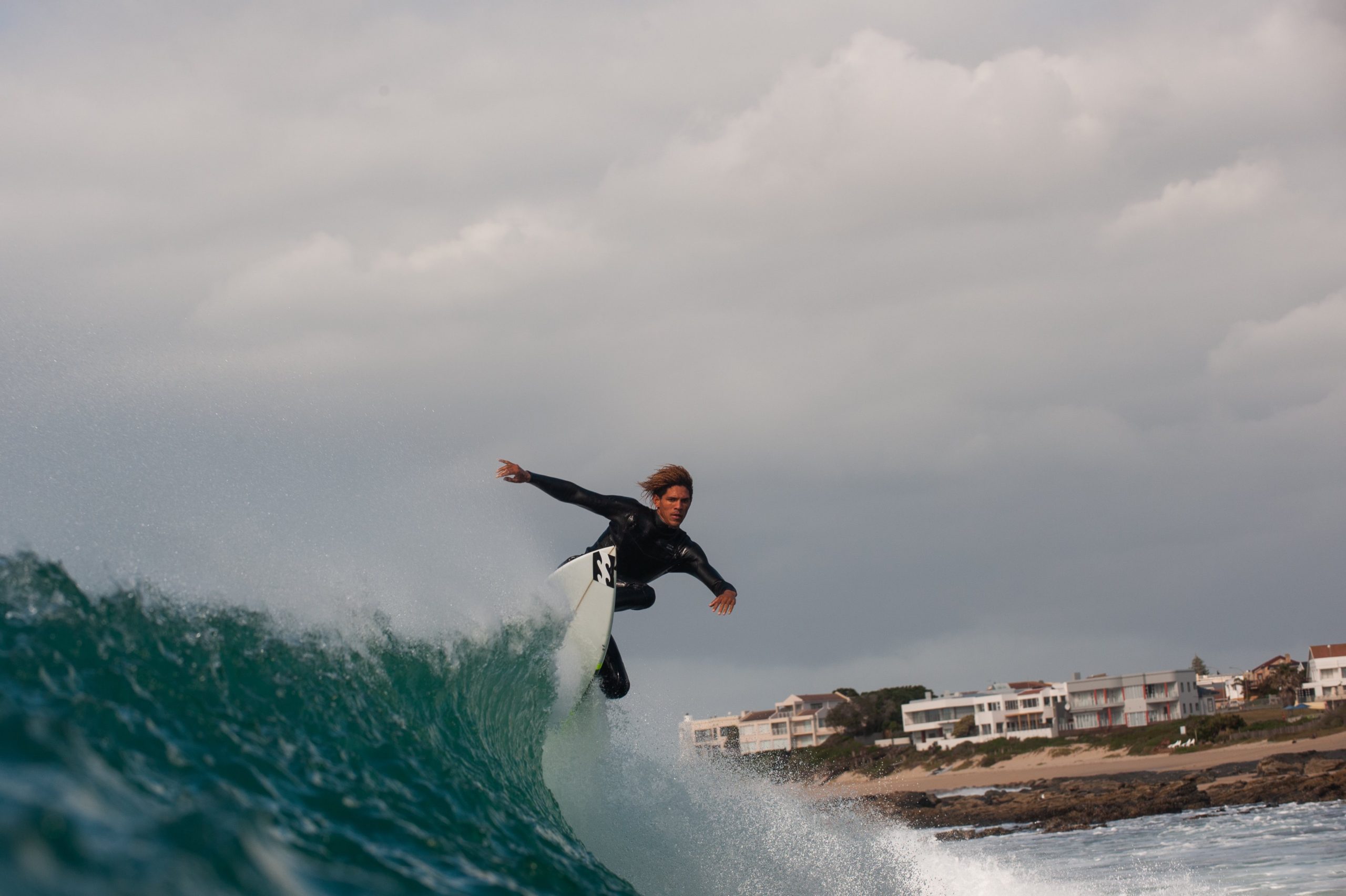 “Thys took me to my first contest, the Grom Games in Port Elizabeth. It’s a contest aimed at developing surfers wanting to enter the world of competitive surfing. I surfed my way from round one all the way to the finals and won the whole thing!

“My father is a gangster. He’s involved with the local Pellsrus gangs. I don’t really know him. I met him for the first time when I was 15 years old, when he was released from jail. My mother was like, ‘Oh, that’s your father’. We started talking, but then he went back to jail. I didn’t see him for many years. Only after he was released from prison the second time did I begin seeing him, but just in passing on the streets of Pellsrus. We kind of talk now, but our relationship consists of basic pleasantries, we acknowledge each other in passing. I spent my formative years living with my mother until she moved inland to Riversdale. My granny started taking care of me and now I live with her. 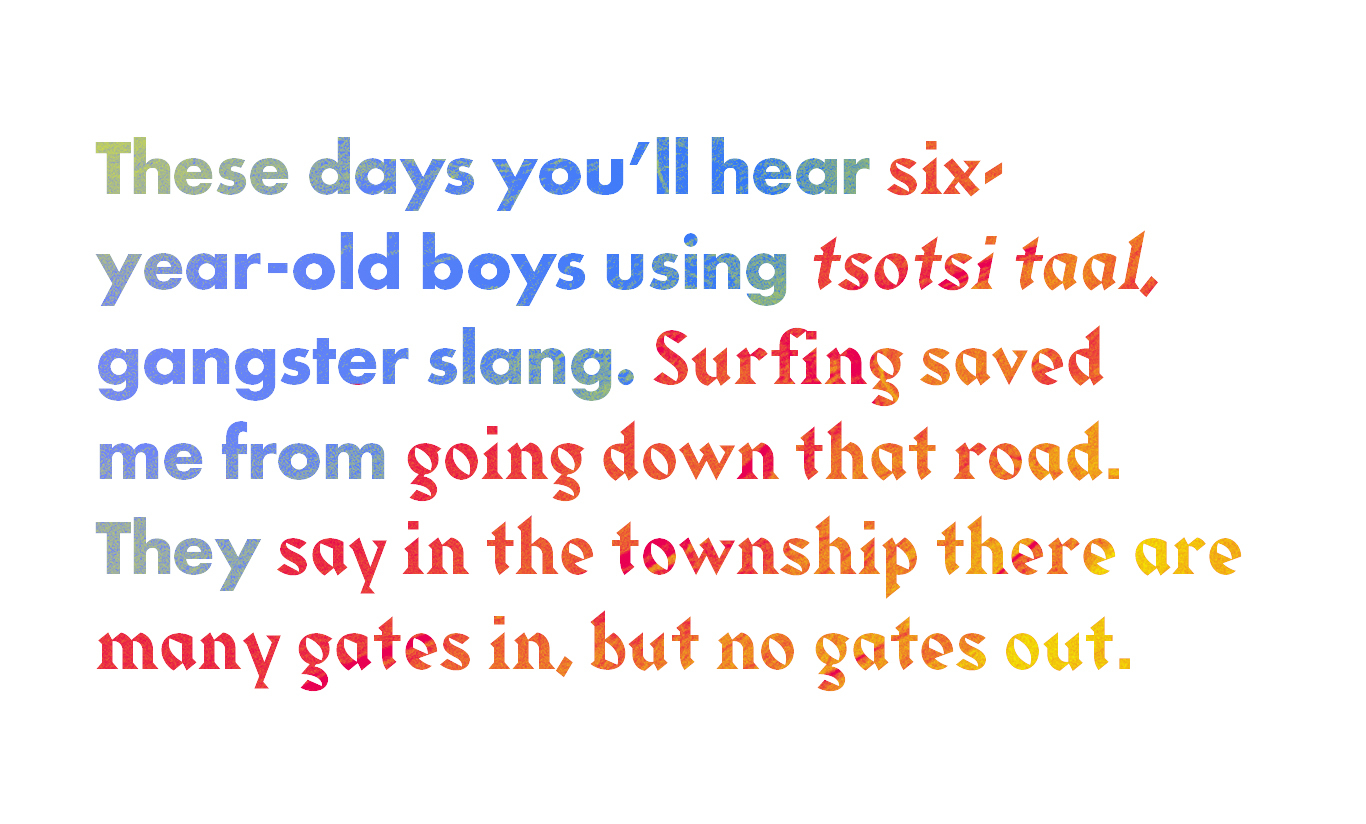 “In Pellsrus I’m rich. Although I live in a township, the perception of people who live in the township is that all surfers are rich. When I walk through Pellsrus people are always asking me for things. ‘Ahhh give me a two rand, give me this, give me that…’ So I just end up giving everyone money. It’s funny how no one knows what’s really going on. It’s so hard to get money through surfing. You need to be doing really well to make money. You need to be doing all the QS [Quaifying Series of the World Surf League] events. In fact, you don’t even make money by doing them, because as soon as you get a payout you need to pay for the next one with that money. So you never have money for anything. But for some reason surfers are protected in Pellsrus. The gangsters never want to rob us. They’re always nice to us. I have friends that don’t surf and they’re always getting robbed by the gangsters. Almost every day. Being a surfer has kept us safe, in some weird way.

“I wouldn’t be the surfer I am if I didn’t grow up in Pellsrus. Here, gangsterism is big. To keep us from going that route, our parents would push us to go surfing and stay away from our friends from Pellsrus. We’d come home from school and they’d be like, ‘Come, come you need to go surf.’ They knew what was going on. All the small kids in Pellsrus want to be gangsters and our parents wanted us to be influenced by a different way of thinking. When a lot of the gangsters are out of jail at the same time, they are always fighting. The small boys see the older men, the people they look up to, fighting and that’s what they’re influenced by. The gangsters will fight in public areas, outside schools and stuff. The little boys see this and will grab sticks and start imitating what’s going on. When we were at school, almost every day, you’d look out the windows and there’d be fighting. These days you’ll hear six-year-old boys already talking like gangsters, using tsotsi taal, gangster slang. Surfing saved me from going down that road. They say in the township there are many gates in, but no gates out. Once you’re a gangster, even if you go away for many years, when you come back you’ll go straight back to being a gangster. 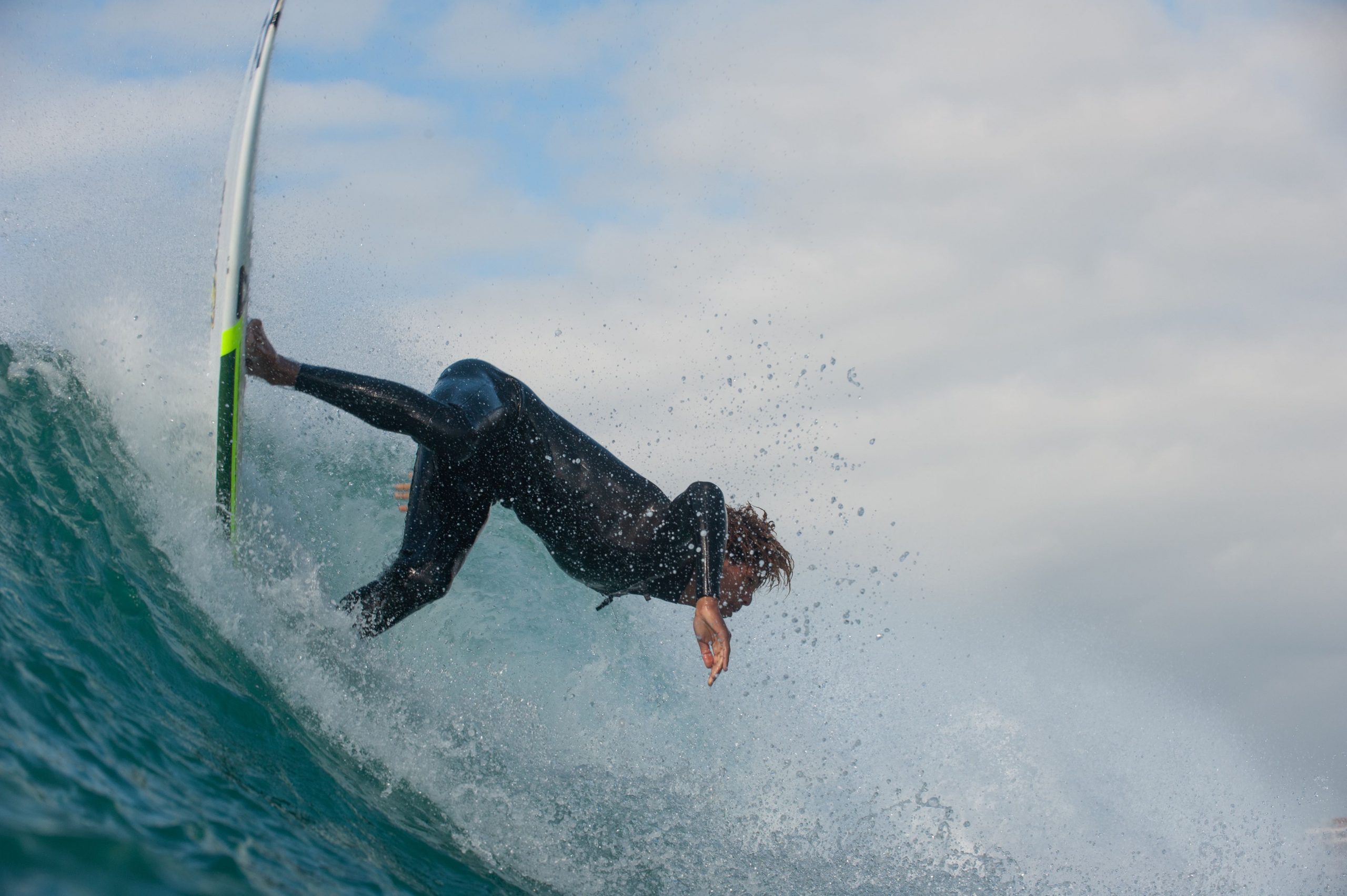 “In 2015 I came 5th at the ISA World Games. That was one of the highlights of my professional surfing career. That, and winning my first QS in Port Elizabeth and winning the South African Surfing Championships in 2019. My biggest obstacle to winning is in my mind. Before heats, I’m the most chilled person you’ll meet, but as soon as the hooter sounds my mind starts playing games with me. As soon as someone gets a wave I’ll convince myself, ‘I’m out! It’s all over.’ The contests I do good in are the ones where I just don’t think about anything. I don’t care. As soon as people put pressure on me and there are coaches around saying, ‘You’re gonna win!’, it all falls apart for me. At Worlds, the coaches Greg Emslie and David Malherbe told me, ‘Ag, fok hulle!’ [fuck them]. From that day on, whenever I go into a heat I’m like, ‘Fok hulle man!’ They can do what they do and I’m going to do what I wanna do.

“Being a black surfer means a lot. It’s definitely a white dominated sport, but, you know, Mikey February opened the doors for black surfers. When you go other places outside of Jeffrey’s Bay and you say you’re a surfer, people think you’re a drug addict because you’re black. That’s what people think black surfers do, they just smoke weed and they’re not really there for the surfing, they just wanna be where the money’s at. On one hand, being a black surfer has given me lots of opportunities, more than some white people even. When we went overseas, they’d put at least one black surfer in the team and that’d often end up being me.

“But on the other hand, if I didn’t grow up in Pellsrus and we had more money it would’ve been very different. There’s a lot of contests I could’ve been doing overseas and getting results, if I had money to travel. Where I’m from, nobody really has money. But now with Mikey opening the doors and groups like the Amandla Surfing Foundation and Surfing South Africa wanting to help get surfers of colour to contests overseas, maybe things will be different. It always just used to be Etienne and Thys paying for us to go to local contests.

“There are some really good surfers coming from Pellsrus township. The next generation. We have Zia Hendricks, Dillen Hendricks’ little sister. She’s tiny, but she has a mean backhand and charges when Supertubes gets big! There’s Ernie, he does the sickest laybacks, he’s so small but he surfs kinda like John Florence, low slung arms and a cruisey style, different to everyone. Then we have Boeta, he surfs pretty sick too. There are a few other kids that surf and hang out around the Rebel Surfboards factory now, like we used to, they have the potential to get good but they’re not as committed, they only surf like once or twice a week. If I could give them advice, I’d say surf as much as possible. Don’t care about friends. Or at least the wrong friends. Because those friends aren’t going to be there one day. The little kids from Pellsrus cruise around in groups and they all smoke weed and stuff, but there’s always one guy in that group that doesn’t. And often that kid is the surfer in the group. If I didn’t have to work, I’d go to those kids’ houses, pick them all up and take them surfing all day every day. And make sure they stay out of trouble by keeping them in the water.”

As told to Cyle Myers. 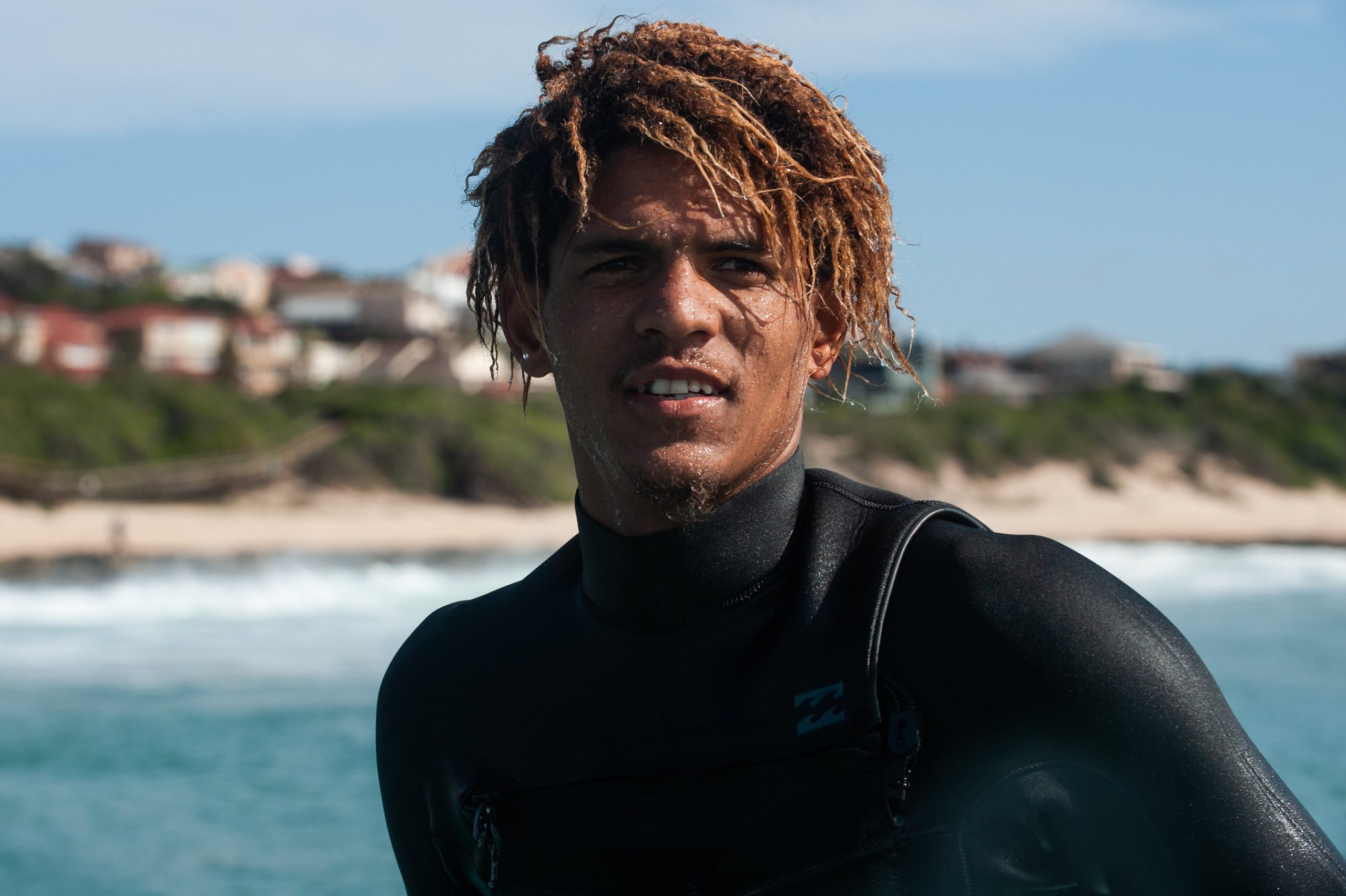 This is a chapter from AFROSURF, the first book to comprehensively document and celebrate surfing and related street culture in Africa. You can support the project on Kickstarter.

Linkedin
RELATED ARTICLES
OTHER ARTICLES
Over a period of four months in 1980, photographer Lionel Derimais created a collection of gritty black and white street shots which show the city in its full pre-gentrification glory.
Photographer Janine Wiedel recalls travelling to Iran in 1976 to capture everyday life there, two years before the stirrings of the Iranian Revolution began and would irrecovably change the country.
Photographer Stefan Dotter recalls travelling to the city of Toba to capture a community of women who are among the very few keeping an ancient deep-sea diving custom alive.
Photographer Simon Murphy discusses his project which aims to shed new light on the maligned and often misunderstood residents of a vibrant neighbourhood in Scotland.
A petition to make non-binary a legally recognised gender is gaining thousands of signatures – but acceptance from the state won‘t solve gender violence and discrimination, argues Liv Wynter.
With Covid-19 pushing more people into insecure work, many women are finding themselves in uncomfortable and sometimes dangerous situations without workplace protections.