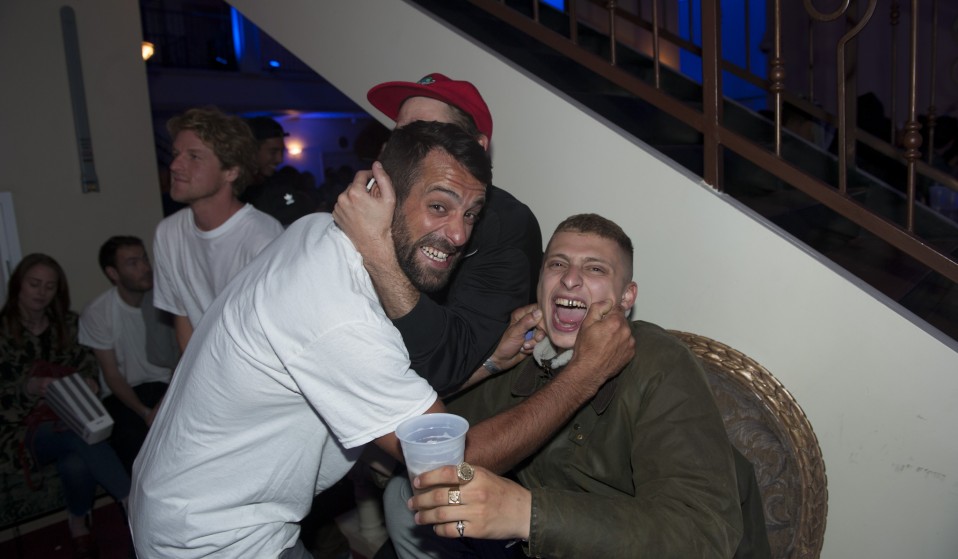 As Adidas gear up to premiere their first full-length skate video in London, local team member Blondey McCoy gives us some insider info on the film and remembers some of the greats that came before.

As Adidas gear up to premiere their first full-length skate video in London, local team member Blondey McCoy gives us some insider info on the film and remembers some of the greats that came before.

In a world and a time that is increasingly low on ‘firsts’ Adidas Skateboarding are about to release their first full-length skate video. Founded in 1998, it’s only taken the three-stripes subsidiary 18 years. An exercise in restraint I find particularly amazing when you consider that 432,000 hours of footage are now uploaded to YouTube every single day.

In fact, the new video – titled Away Days by the football-loving team manager and all-round Welsh legend Skin Phillips – has been three years in the making. It spans 90 cities around the world and features almost 30 of the Adidas Skateboarding global family – from ‘legacy pros’ like Lucas Puig and Dennis Busenitz to new blood like Tyshawn Jones and Na-kel Smith and wildcard Gonz for good measure.

Having already screened in LA and New York, tonight (May 17) the big-brand bonanza touches down in London town. In a city that has been dominated in recent years by the independent and the local – Isle’s Vase video and Polar’s I Like It Here Inside My Mind, Please Don’t Wake Me Up This Time film were two happily attended recent releases, the National video is next weekend – the spectacle of an international premiere on this scale feels exciting and kind of old school.

So why does it still matter? And what can we expect to see? We hit up skateboarder, artist, and global ambassador of Covent Garden’s Cross Keys pub Blondey McCoy to get his take on it all.

How long have you been filming for Away Days?
Not long at all really, I only just got on. I went on a few trips but I’m lucky to be involved with it at all really. We’ve gone for the ‘less is more’ approach with the amount of footage I have in the actual video…

Have you seen it yet? What’s your favourite bit?
I watched it last night for the LA premiere, to be honest I don’t want to spoil anything for you lot, but there’s a lot of surprises in there really. The boys at Juice and all the filmers smashed it though, there are cutaways and intros in there that fully feel like you’re watching The Bourne Identity or something, so that’s pretty mental.

With more focus on independent and local, the era of big global skate videos seems kind of dated. What do you think one like Away Days can add to the mix/offer?
I think even though Adidas have been about in skateboarding for a fucking long time, to do a full-length is to almost justify your place in the industry. It acts as the honest representation of what it’s all about, and to go through the actual process of doing it is something unique too, especially with a team as diversely international as ours.

What’s your favourite skate video of all time? Why?
Ooh, I love the old school H Street ones… and all the old Alien ones, and of course Mixtape. But my favourite would have to be BAKER 3, because to me it’s the perfect representation of what skateboarding should be like. I don’t know how many people there are in that video but they all dress and skate completely different, you had Ellington on one side in a waistcoat with bleached blonde hair, and Antwuan in a wifebeater down to his knees and probably size 50 jeans, next level. The fact that Baker videos have a theme tune (Lou Reed) is amazing too.

If you could put a dream video together – who’d be in it and where would it be?
Palace full length in London, E.T.A 2020(ish). Pryce who does ‘Alltimers’ was on about doing the total antithesis of the Cliché ‘Gypsy Tour’, so just every skater gets his own private helicopter and we fly out to spots in Saudi and drink nice wine and that, that’d be quite good too.

What’s the best and worst thing about an away day?
Benny snoring his arse off on the other side of the room right now is the worst. Getting to educate yourself through travelling the world and go skating with all the boys is the best.

Away Days will be free to watch for 24 hours on YouTube, May 29. It will then be available on iTunes.

Linkedin
RELATED ARTICLES
OTHER ARTICLES
Photographer Pani Paul has spent three years skating and shooting with the diverse community at Mile End skatepark, a rare corner of gentrification-free London.
Huck travels to Barcelona, London, Berlin and Copenhagen to offer an outsider's insight into the life of an up-and-coming skateboarder.
To celebrate Nike SB's NESW project – a series of videos and a book about the UK skate scene – we catch up with photographer Henry Kingsford.