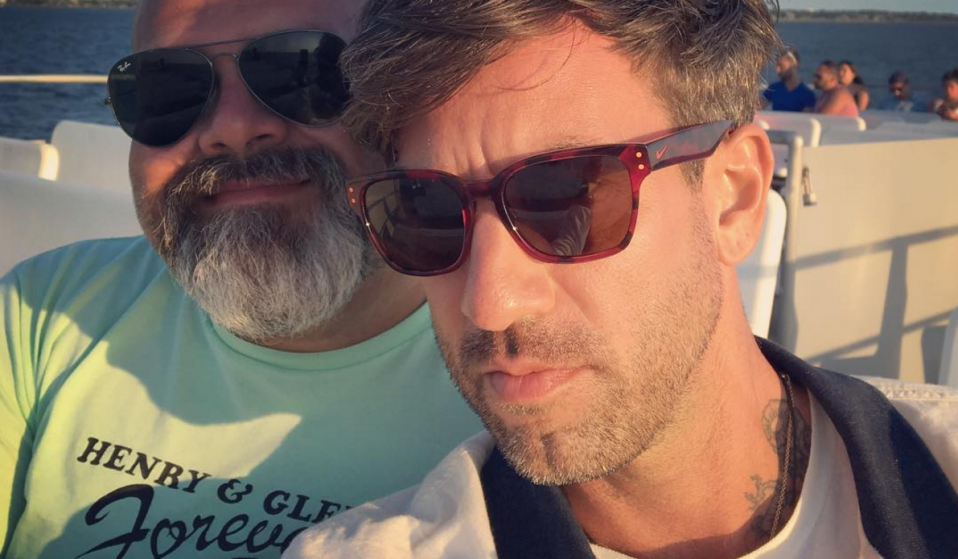 Brian Anderson might have come out publicly for the first time, but what does it mean for skateboarding as a whole? Patrick Welch revisits an unanswered question: is skateboarding riddled with homophobia?

Five years ago, Huck reported on a culture of silence that encouraged gay skaters to remain in the closet. Now pro Brian Anderson has come out publicly for the first time, but what does it mean for skateboarding as a whole? Patrick Welch revisits an unanswered question: is skateboarding riddled with homophobia?

You can take your Wallenburgs, your Carlsbad gaps and anything done down El Toro, and I’d still wager that no pro has struggled with something harder than he did with his coming out. The Instagram photo he posted after that documentary dropped, of him and his boyfriend chilling on the ferry to New York’s gay paradise Fire island, was a genuine first for skating: an NBD worthy of the cover of Thrasher. Well done, BA, everyone has been shouting. 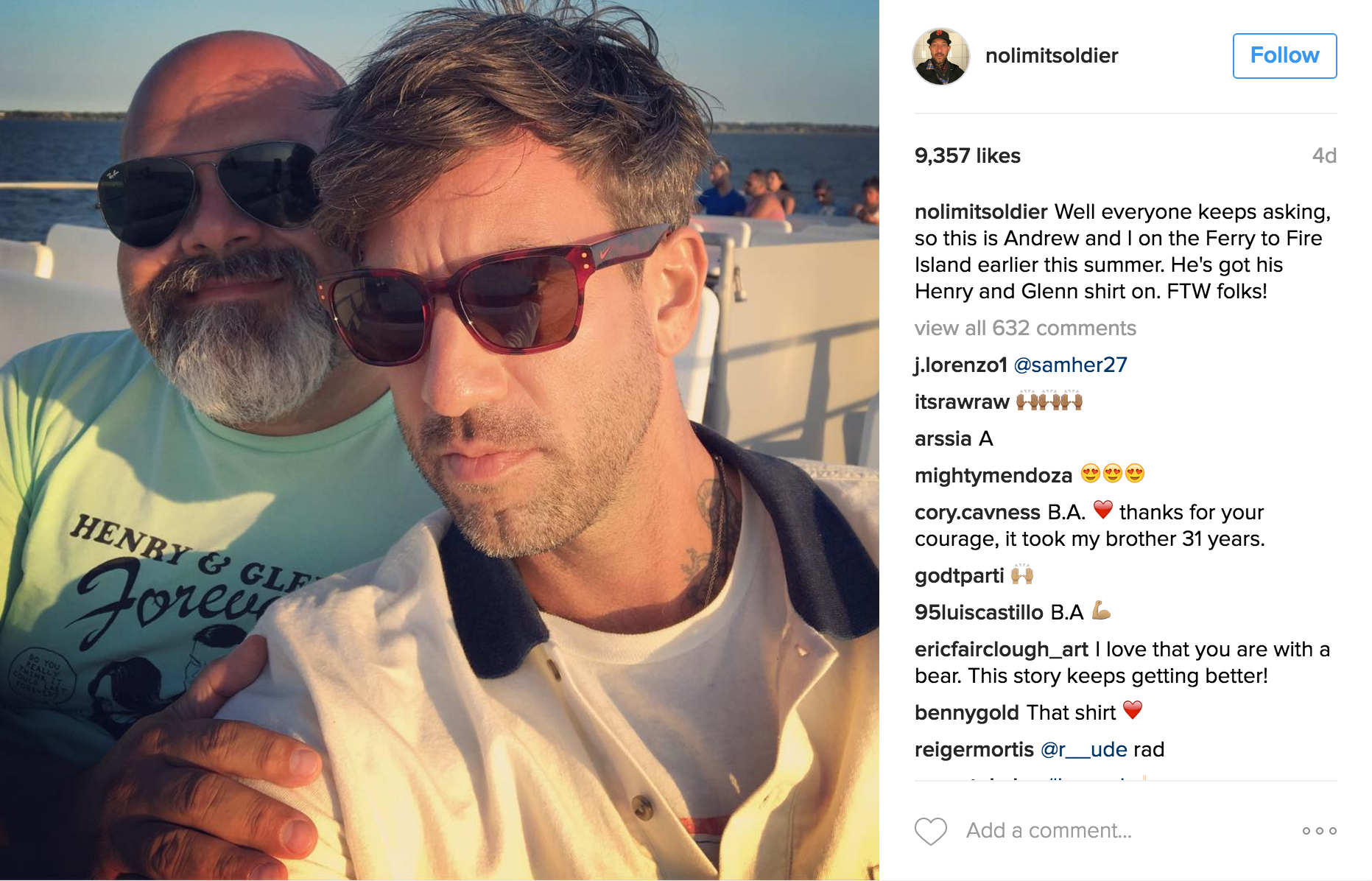 And quite rightly, too – I can’t say it enough: that guy deserves all the praise in the world for being the first out gay pro skater. But – and here’s the rub – from where I’m standing, as a gay dude who has been skating for 20 years, I’m not sure congratulations are in order for skateboarding as a whole.

Five years ago, I wrote a piece for Huck about Tim Von Werne, who was an am for Birdhouse in the late ’90s and was gay and out to all his team mates, but told that he couldn’t talk about his sexuality in an interview with Skateboarder magazine. And I thought then, as I think now, that, um, weren’t the Stonewall riots in 1969? And don’t we now have gay marriage, gay marines, even gay people in rugby – fucking rugby! – and yet, until last week, we had no out gay pros in the supposedly cool, creative world of skating.

A skater friend of mine from Portland, Leonard, who has been skating for 30 years, summed up last week’s bittersweet celebration by saying: “The fact that Brian Anderson spent his entire professional career in the closet says so much about what needs to change in the world of skateboarding, the world I’ve grown up in. This marks a happy future, but also a sad history.”

I won’t rehash the arguments behind why it’s taken so long, why Anderson stands alone – aside from Von Werne and Jarrett Berry, another am. It seems to be a mix of the industry’s reticence to encourage – and again, let’s be clear: encourage, not force – people to come out for fear that it could hurt product sales to ‘impressionable teens’. It’s that, mixed with a general cloud of homophobia from the bottom to top, running the gamut from macho bullshit and gay name-calling at spots, right up to skating’s biggest names, Jay Adams, Josh Swindell and Danny Way , and their alleged involvement in different homophobic murders, which the skateboarding community happily glosses over (Swindell and Adams were convicted, but Way was not).

Let’s pause for a moment to digest the fact that while some guys are worried about losing their careers for being gay, others retain their legendary status – and their sponsors – after being involved in the murder of gay people. 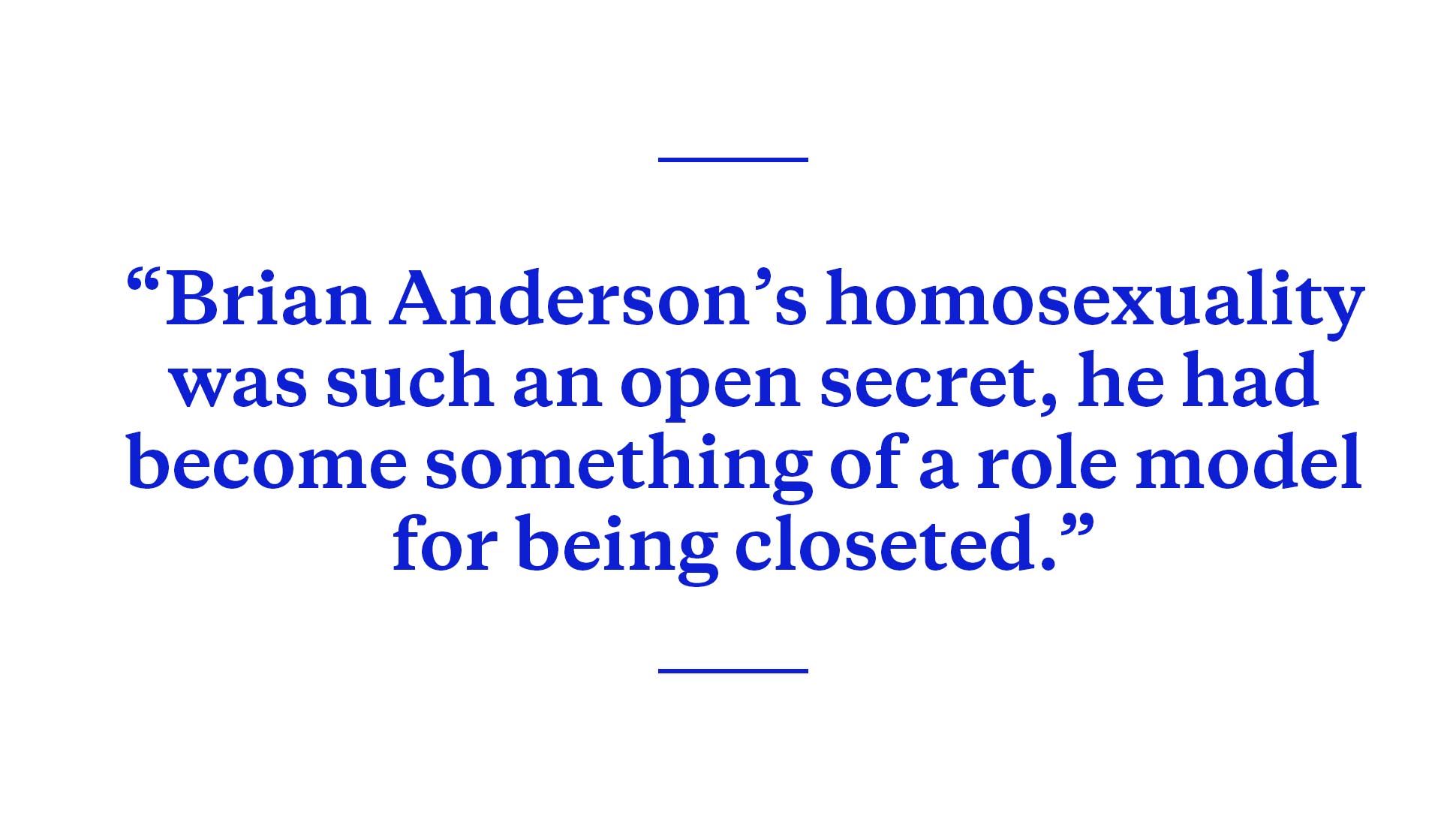 Almost 15 years ago, I was talking with the editor of a big skate magazine about why skating didn’t seem able to evolve on this issue. His answer, simply, matter of factly, was that, well, “90 percent of skaters are moronic automatons”.

A friend from Scotland, Joe, who is gay and has been skating for 20 years had similarly scathing things to say about some of what he referred to as the ‘LA bro-types’ in Anderson’s video last week: “Should the skateboarding industry as a whole give itself a hearty pat on the back for this sort of vague acceptance, I will vomit. It’s 2016. This whole thing has made me believe that skating in general is about as countercultural, liberal and free as golf. I’d say at the average skatepark, around 40-50 percent of the people there are awful, 20 percent are tolerable and around five percent are people you’d actually want to hang with. The other 30 percent are either mums with prams or kids on scooters.”

I’m not sure I agree that skating overflows with dreadful people, but I think its time it got its house in order. As a friend, Alex, from Portland says, “I think many teenage male skaters are still pretty homophobic. I hear a lot of ‘faggot’ name calling at the skatepark. But most male teenagers are [homophobic], regardless of whether they skate or not.

He didn’t know how many skaters are doing that shit into their 20s and 30s though.

Another female skater I spoke to disagreed that young skaters are so bad. Sophie is from London, has skated for 15 years, eight of those sponsored, and worked as a team manager at Element. Her take is that the SoCal skate industry glitterati  – who were teenagers over 20 years ago, let’s not forget – are out of touch: ‘‘Brands that are run by older skaters are scared [of how] younger kids will react because they think of how they were themselves at that age and how they would have reacted. When in actual fact, generation Z are the most progressive and gender fluid of all of us.’’ 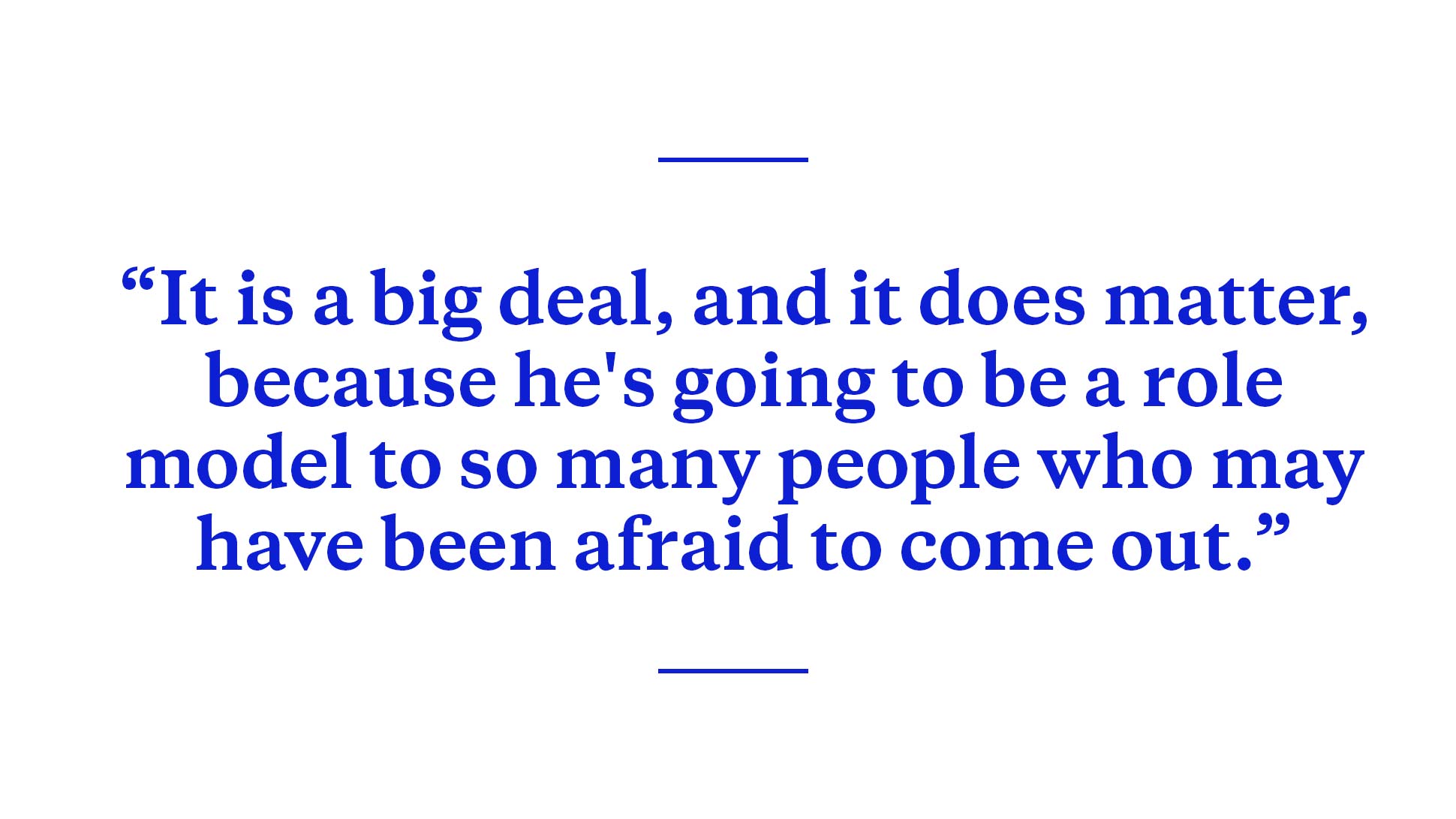 ‘Why does all this matter at all though?’, a lot of people have asked.

It matters because being open about who you are is crucial to your mental health and happiness – you need to come out otherwise you’ll be miserable. End of.

Secondly, it matters to those who look up to you because when you grow up gay, every gay role model is a lifeboat, whose existence you cling to in the hope that, as they’re doing OK, maybe one day you’ll be OK too. It’s worth noting that in the US, by far skateboarding’s biggest market, 30 percent of young LGBT people attempt suicide. And right now there are a lot of young people feeling a lot better about their futures after hearing their peers say nice things about Brian Anderson.

Indeed he has probably saved some lives. Alex again: “The ‘it doesn’t/shouldn’t matter’ sort of erases the importance of BA coming out. It is a big deal, and it does matter, because he’s going to be a role model to so many people who may have been afraid to come out before.”

Let Brian Anderson’s news be a celebration then, but also a turning point. Overnight, he probably changed a lot of people’s’ perception of gay people. “I’m super-hyped specifically on the fact that it is Brian Anderson who came out,” says another skating friend, Ninian, from Edinburgh, before adding, “There couldn’t be a clearer icon of O.G, gnar, legit skating than BA.” And while, I agree it’s cool that he’s smashing some stereotypes, would his homosexuality be as well received if he were a less hesh, less burly dude? A tech guy, say? Who knows, maybe time will tell.”

Let’s end on some good news. After writing the Tim Von Werne piece, I had a bunch of people get in touch. One guy in Seattle, Tobias – shop-sponsored, mean nollie big flip; one of those guys – told me he felt that his sexuality was at odds with his lifestyle as a skater, and that as Brian Anderson’s homosexuality was such an open secret, he had become something of ‘a role model for being closeted’.

Last week I asked Tobias what he thought about the whole thing now. “BA coming out and everyone talking about it non-stop, well, that was the kick in the ass I needed,” he says, before explaining that he’s now decided to come out too, with, so far, ‘100% acceptance and support’. The next day, another gay skater I connected with through that article, David, in Paris, posted on Facebook: “Thanks BA. I’m sure it wasn’t easy, but it means a lot.”

Linkedin
RELATED ARTICLES
OTHER ARTICLES
Protestors gathered outside Downing Street following the latest atrocities committed by Israel against Palestinians living in the besieged strip.
After rewriting the indie rulebook with her devastating songs about romantic longing, the singer-songwriter is now imagining a future in which the artist is no longer a product.
Photojournalist Fiora Garenzi spoke with people still living in Eastern Ukraine, an area which seen some of the heaviest fighting since the war began.
A new series of photos by Johny Pitts shines a light on communities and subcultures that have all too often been overlooked.
The author discusses her new memoir, which offers a sobering reflection on the racism and otherness she’s experienced along with a joyful celebration of her culinary heritage.
From the chip shops, to the bingo parlors and burlesque dancers, photographer Mike Coles remembers capturing scenes of holidaymakers by the English coast.