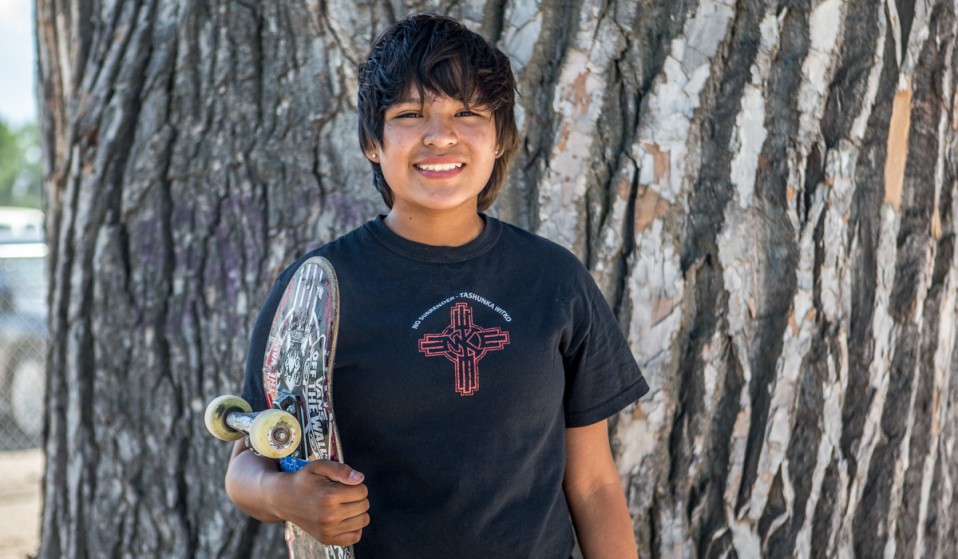 As a skateboarder today, we’re repeatedly faced with piles of our own bullshit and left to take big nasally whiffs – eyes squinting, mouths drooling. We see things differently than everyone else, we say. We’re all family, we claim. Wherever we go in the world, we find friends and cohorts who – from the bottom of our thin, shared souls – understand one another on a level that cannot be reached through the sad and conditioned viewpoints of mainstream society.

When Emily Earring got her first skateboard, she’d never heard skateboarding’s thread-bare clichés, but even without the sales pitch, she saw skateboarding’s truths firsthand. “My dad got me a skateboard for Christmas,” Emily remembers. “A plastic, pink, girly board, and it had like a pink mermaid on it. I thought it was cool, but I only knew how to push around. After a couple hard falls, though, I kept getting up and I got a great adrenalin rush. Around that time, I was going through a lot of alcoholism in my family and the loss of family members. Skateboarding was what helped me.”

But without skateboarding – without the tool that acts as antidote to so many problems for so many kids – Emily has a pretty good idea of what might have been in store for her: “I’d either be selling drugs or, sad to say, I wouldn’t be here.”

When the news reports from Pine Ridge, South Dakota, come across the wire, it’s not good. Lately, it has to do with the courts, the state, the feds, the protests, and the predatory and depressing existence of Whiteclay, Nebraska – an unincorporated town, population fourteen, whose sole existence is to be the liquor supplier to the all-dry Pine Ridge Indian Reservation.

When you go to find other info, you’ll run across the stats: ridiculous unemployment numbers, staggering death rates, weirdly short life expectancies, and mind-numbing fetal-alcohol-syndrome data. And when the documentarians – the news crews and the magaziners – come to visit, they scratch the same irritated surface again and again; what a tragedy, what hell, what complete and total shit.

But these obsessive, professional efforts to absolve ourselves through sensational journalism and filmmaking eventually make their way back home. Sadly, through the power of the media you are consuming at this very second, Pine Ridge has started to believe that there is only one story.

But that’s not true. There’s never only one story. You know because you’re a skateboarder, and because she’s a skateboarder, too. Emily Earring knows: “[Skateboarding] teaches you to be independent,” she articulates. “Certain people you know can never keep a promise. It’s always been like that here. But finding skateboarding, you’re independent. Because you have to do the tricks. You have to push around. And you have to push yourself to get better. No one can make you.”

This viewpoint is important not only for Emily but for all Pine Ridge skaters. And to help understand why, there’s one statistic you need to grasp right now – one that is hopeful and positive and forward leaning: forty-two per cent of the 40,000 people living on the Pine Ridge Reservation are under the age of nineteen.

Just like skateboarding, the population of Pine Ridge is its own youth movement, its own culture, and the storyteller of its own powerfully unknown future. And in that corny, against-all-odds spirit of skateboarding, Emily has also taken her future by force. “When I first started, it was like, ‘Oh, she’s a girl. Watch. In a couple days, she won’t even be down here anymore.’ It was so hard to skate around the boys. They’d snake me or just go in while I was going so I’d have to jump out. One day they snaked me so I just went in there and we collided [laughing]. I got up and kept going.”

“I had to teach myself,” Emily remembers. “And I kept falling and falling. I was waiting for them to help me, give me tips, or something. And that wouldn’t happen until that first competition I entered. And that’s when they start respecting me.”

Skateboarding’s emotional clichés – which we’ve buried because they sound silly in the face of real shit – are having a genuine and positive effect on people’s lives. The self-respect we’ve earned, the lives we lead, and the stunted oral histories that skateboarding tells itself are being picked up and run with by kids who need exactly that, exactly now.

The real marvel here in Pine Ridge is that through the zero-to-sixty effect brought on by the introduction of professionally built concrete skateparks (two since 2012 thanks to Levi’s Skateboarding with plans for two more on the horizon) and real skateboards to a place that didn’t have access to any of it, a new culture is erupting and, in turn, reminding skateboarding of its own powerful stories. Anecdotally, giving kooks of all stripes a different way of seeing things, building families, saving lives, and creating lifetimes. “Yeah,” Emily smiles. “It’s crazy how it popped up out of nowhere. It’s, like, unexpected.”

So a huge thanks is in order. Emily Earring and all of Pine Ridge: Thank you for reminding skateboarding of what we work so hard to forget. Our made up clichés may be just that – made up – but they also get us out of the way of the mountains of bullshit that pile up in the real world.

The Lakota sun dancer says, “Taku skan skan wakan.” Something holy is moving. This something is you.

Linkedin
RELATED ARTICLES
OTHER ARTICLES
How one man fostered a vibrant youth scene out of the rubble of a fallen state.
Photographer Pani Paul has spent three years skating and shooting with the diverse community at Mile End skatepark, a rare corner of gentrification-free London.
A pretty portrait on the wall is all good and well, but shouldn't we be celebrating art that makes an impact in the real world?