Outdoor / Skate / As a girl skating was my escape. As a young woman, it was taken from me 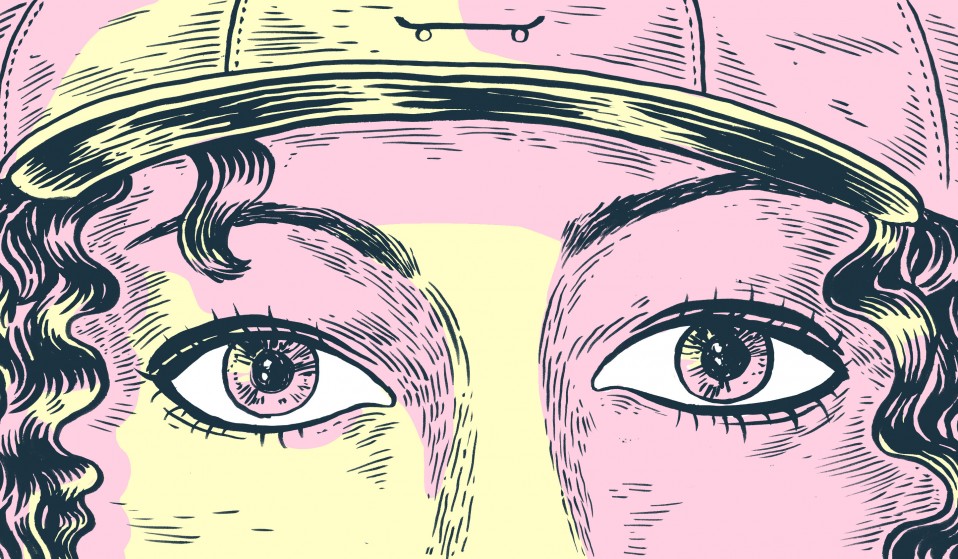 In her early years, skating provided Marianne Eloise with an escape from anxiety, a toxic household and her OCD. Then she got older, and all that changed.

In her early years, skating provided Marianne Eloise with an escape: from anxiety, from a toxic household, the OCD that span around her head. But as she got older, all that changed; suddenly her board could no longer be a sanctuary.

I bought my first skateboard when I was ten years old.

I didn’t fuck around, either: I saved up £50, a fortune for a child, and I dragged my parents to an actual skate shop to pick up a board that I had already chosen online. It had blue lightning on the trucks and I thought it was the coolest thing I had ever seen. It didn’t matter that I hadn’t really stepped foot on a skateboard before; I wanted to, and I was going to commit until I could do it.

My first introduction to skating came as my introduction to most things did: via my cousin and her friends, who were five years older than me. They would ‘babysit’ me, which would mostly involve making me sit on a skateboard while they kicked me down the halfpipe. It being the very early 2000s, they wore huge baggy trousers weighed down with chains. They listened to Korn. They made me watch Jackass and then they’d try to imitate it, hurting themselves and laughing in the process.

They didn’t give a shit about anything; in contrast, I was a teacher’s pet suffering through childhood OCD that I didn’t know how to name yet. I was anxious, I couldn’t concentrate, I panicked constantly about what everyone thought of me. I wanted, more than anything, to be cool enough to just skate and laugh with my friends. I wasn’t.

Then I discovered Avril Lavigne, and she sparked in me again that desire to just stop giving a shit – regardless of whether or not she was ‘legit’. Something clicked; she was the first thing I ever discovered on my own, and despite being a child with curly brown hair who had never touched an eyeliner pencil, I started to imitate her.

Part of that imitation came in that trip down the skate shop – me, aged ten, knowing exactly what I wanted, having ironically planned my new ‘coolness’ down to every last detail. Skating was the first thing in my life that made me want to actually go outside, to participate, to not just sit inside alone. I loved it, even though common sense says I really shouldn’t have. It was against all of my impulses, all of my instincts stopping me throwing myself on the ground or hurting myself or avoiding homework. I was a very neurotic, calculated child – but less so when I skated.

The first time I took that skateboard out, I probably did hurt myself. But it appealed to my obsessive need to be better, and I carried on. Living in a reasonably isolated countryside village with very absent parents, I had hours and hours after school in which to practice. Hours that I spent alone and unwatched in car parks and bike lanes and going down giant hills only to fall off at the end.

I didn’t mind if I fell off. I practiced and I practiced, and for the first time in my life my mind was quiet. I felt accomplished. I could focus. I made one solitary friend who also liked to skate, and she taught me to ollie and kickflip. I didn’t learn much more, but still, I loved skating. It was the one thing I could do completely alone that required no money or and nobody else’s permission.

I carried on until I was twelve or thirteen, when I became hyper-aware of my existence and not only how much better everyone else was at skating than me, but that I was the only girl doing it. I also discovered the internet, MySpace, and my other beloved subculture: emo.

Regardless, my new emo friends would still hang out down the skatepark every weekend. The first time I drank vodka and Lucozade sitting on a ramp I felt a pang of jealousy watching the boys skate, but the girls just weren’t active participators. We were just there. Once or twice I considered having a go and would do it a little, “for a joke”, but with everyone’s eyes on me I was too scared to actually just go through with it and try. Maybe they would have been impressed if I did. Maybe they wouldn’t have given a shit either way.

Regardless, just like that, I was too self-conscious to skate anymore, and I stuffed my genuine love for it deep down. Through the years when my various friendship groups would end up, inevitably, being the types to congregate at skateparks, I would sit and feel that little pang of jealousy. I would, and I still do, consider just having a little go.

Skateboarding was the only thing I’ve ever done in my life that actively distracted me from my anxiety, an outlet that let me feel freedom, gave me space and a reason to leave my toxic household for a time. I resent quitting, I regret it now every day. Despite it being a very male culture, would my skater friends have even cared if I’d joined in? Probably not, but my lifelong self-consciousness was not one to melt away when I was in a skatepark full of people I wanted to impress.

That isn’t to say that I at any point have had the grown-up presence of mind to leave any aspect of that culture behind. I still own a skateboard that I take out, very secretly, in the night time. I can’t do any tricks anymore, but it still gives me the same feeling that it did in 2003.

Anyone who has been around me for a second or who has read anything I’ve written will recognise that a deep-seated love of Jackass and Tony Hawk has informed most of my tastes as an adult. I don’t know what it was about skating that calmed my little brain: the concentration that it sometimes took not to die? The excuse to leave the house? The simple pleasure of watching someone faceplant? Whatever it was, the culture surrounding it represented an untouchable hedonism; a freedom that I probably will never attain. But it’s a freedom that I did and still can grasp at, even if only in fleeting moments.

Linkedin
RELATED ARTICLES
OTHER ARTICLES
With abuse of call-centre staff on the rise, many are now speaking out about the hostility they’ve faced.
Hundreds gathered together to protest the policing bill by making as much of a racket as possible.
The musician, DJ and founder of Monika Enterprise reflects on a career defined by revolution and rule-breaking.
Photographer Yan Morvan revisits a radical moment in history, which saw the emergence of a fiercely-rebellious spirit among the UK‘s youth.
Those set to be impacted by the governments ’undemocratic’ bill explain why it risks silencing them.
Jermain Cikic reflects on his experience of visiting the island of Samos, Greece, in the summer of 2021.