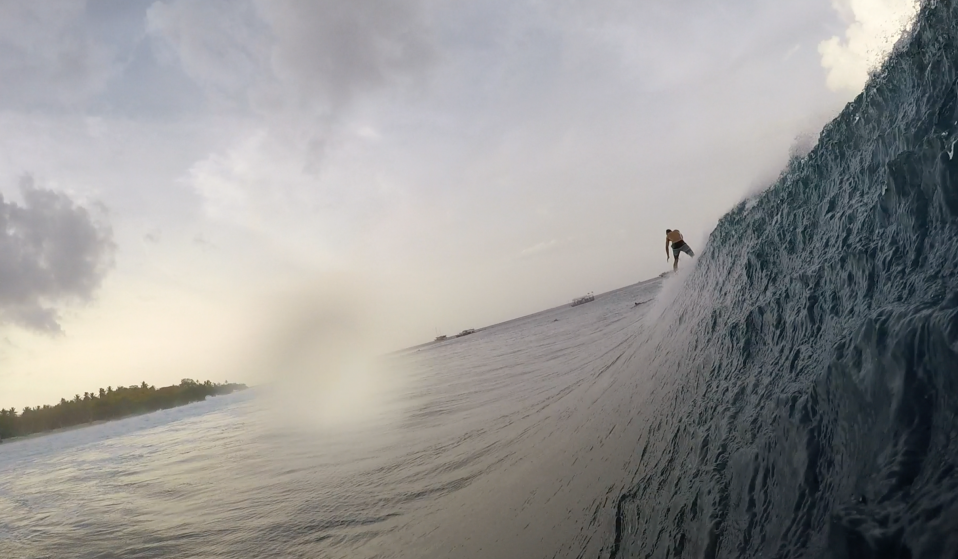 I’ve been thinking way too much about the GoPro camera. When they first came out I was both floored and repulsed. Floored because I’ve been on both sides of the water shot. Big, heavy, cumbersome water housings have always been a giant obstacle between the shots you see in your mind and the ones you actually get. GoPro is to the primitive water housing what wheels are to the 100 lbs. suitcase. But repulsed because of the, ‘Me! me! me!’ factor. Beware the novice surfer with the GoPro mounted on his nose, I have written in my head a thousand times. GoPro and the fashionability of surfing seemed a lethal combination.

But my tune has changed. I now see the GoPro though an ironical, Warholian lens. Nick Woodman, the founder of GoPro, is less an entrepreneur than a brilliant conceptual artist. Nothing captures our selfie/reality TV/Kardashian culture more punchily than the GoPro. Nothing reflects back the great pools of narcissism we swim in better than the GoPro. 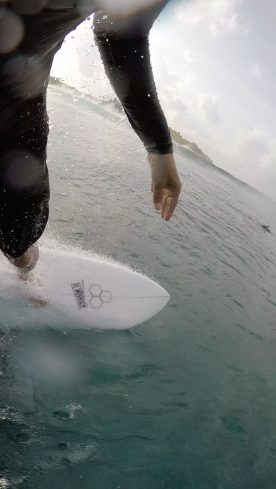 I shot my POV across golden-hued afternoon Sultans, both with slashing moves and a low-couch cruise. I turned the camera back at myself and was surprised by the monstrous faces I made while stroking for a wave, the strange finger splays while cutting back or carving off the top (I’m a Virgo). I shot the breakfast buffet at the Four Seasons, which might be the most impressive breakfast buffet I’ve ever encountered. What I did not shoot — what I hope I’m still around for when that revelatory device gets invented — were the voices in my head. Normally I’m a nice man. Most of the time I wish people only well. But there is a hatred that surfaces in a crowded lineup so evil and bile-laced that it feels like it belongs to someone else.

It hit hard during my first session at Sultans. A gaggle of Italian surfers huddled around the takeoff zone, chatting and giggling. Sultans breaks at the tip of a tiny island. No surfers live there, thus there are no locals, only boats that show up with four or five surfers at a time — a surfing no-no anywhere else, but perfectly acceptable here in the Maldives. Sets of waves came, the Italians’ conversation naturally segued into proprietary paddling. They caught every wave. None could surf particularly well.

I found myself wishing them fin chops, shark attacks, boat wrecks, middle-of-the-night visits from ISIS. As I pulled back from yet another beautiful blue wall because of the stink-bugging surfer already on it, I cursed, smacked my board, threw WCT-scale internal tantrums. I was astonished by my rage.

Later, in my 3am tossing and turning jetlag, I came to locate the real culprit in this peculiar brand of hate. It was the surf — or rather the quality of the surf. It was the bond that forges between a looming swell and an in-position surfer. It’s those thousand butterflies that flutter inside when you are on the brink of catching a gorgeous wave.

I’ll fight to the death for a glassy six-foot barrel, I heard myself think. I am not a father but I suspect that it’s something like a father’s love for his child. So in fact it was not hate that I experienced in the lineup at Sultans, but rather love. Profound love. That stuff that stirred up inside me was a renewal of vows, a reminder that I’m still wholly in this surf game.

The following morning the Italians were once again huddled around the takeoff spot at Sultans. I paddled to their inside, smiled. 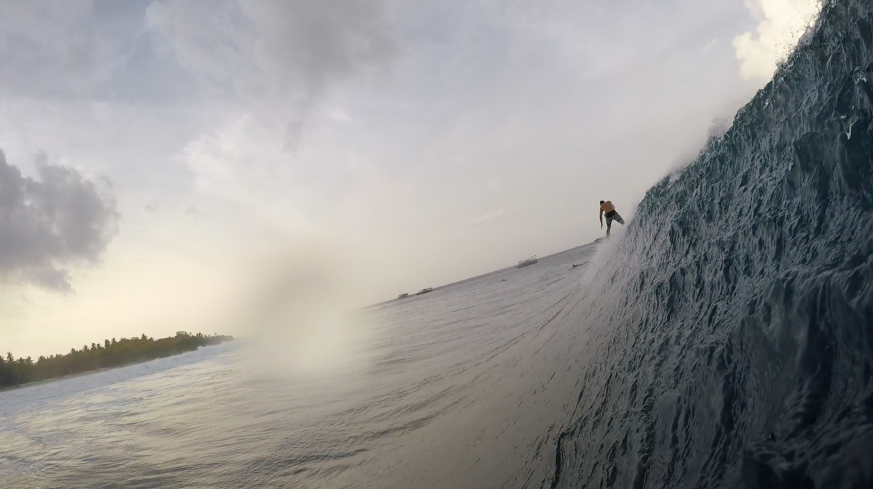