Outdoor / Skate / ‘Nobody sits you down and explains the rules. You just do it.’ For Go Skateboarding Day 2017, we’ve taken a trip down memory lane through our archive to revisit lessons we've learnt from some of skating's greatest icons.

For Go Skateboarding Day 2017, we’ve taken a trip down memory lane through our archive to revisit lessons we've learnt from some of skating's greatest icons.

Anyone who has ever picked up a skateboard knows that our community isn’t just about skating. It’s about creativity, about friendship, about seeing the world around you through an alternative lens. Whether it’s the DIY kids building a ramp hidden from view, or the legends of the scene looking back and reflecting, there are lessons to be learnt from anyone and everyone.

For the past 11 years here at Huck we’ve been listening to and learning from skaters across the globe, sharing stories and thoughts from our community’s most radical, pioneering minds. This year, on Go Skateboarding Day 2017, we’ve looked back through our archives to pull together the most powerful lessons we’ve learnt along the way.

Skateboarding will always find a way to exist

Seen as politically subversive, authorities have cracked down on skateboarding throughout history. Filmmaker and skater Joachim Trier reflected in an interview with Huck that when he was growing up in Norway, it was illegal to buy, sell or use a skateboard.

“We had to smuggle boards in, we had to build our own boards,” he recalled. “People were making secret ramps out in the woods, we were arrested by the police, it was crazy.”

It’s a lesson that has lived on. Deep in the frozen heartland of Finland, Jaakko Saavalainen’s do-it-yourself skatepark proves anywhere can become a skate utopia – if you’re willing to put in the work.

Photography and skating often go hand in hand, capturing moments of creative expression, and the result of months of practice. San Jose skater and photographer Jason Hsu encourages people to follow their gut and find their passion.

He explains: “In skating, you take an environment and figure out what to do with it. In photography, you look around you and manipulate the environment. The fact that skating has no rules also lends itself to photography: you can do whatever you want.”

Skate as much as you can

Tony Hawk, arguably the most recognisable pro skater in the world, stays grounded by sticking to what he loves. Despite the fame and fortune, skating is still his number one priority.

“I feel like I’m always tied to the core of skating because I’m out there every day,” he told us. Element Skateboards founder Johnny Schilleref says skating saved his life. He used that focus to build an enduring legacy, and encourages others to apply the same hard graft.

Skateboarding is all about celebrating individuality

Street skateboarding pioneer Mark Gonzales has a unique style that can transform any location into an opportunity to skate  – and that energy and creativity has always resonated through skate culture. Mark Gonzales – Photo by Will Robson-Scott

“I think the reason skateboarding’s always going through changes is because it’s an art form,” he explained to us. “If it weren’t an art form and it were an athletic thing, everyone would be wearing jerseys. It would be more organised, and personal style wouldn’t be emphasised.”

All it needs is imagination

We’ve seen that you can skate anywhere from a waterpark to a shopping centre. As die hard street skater Louisa Menke poetically puts it: 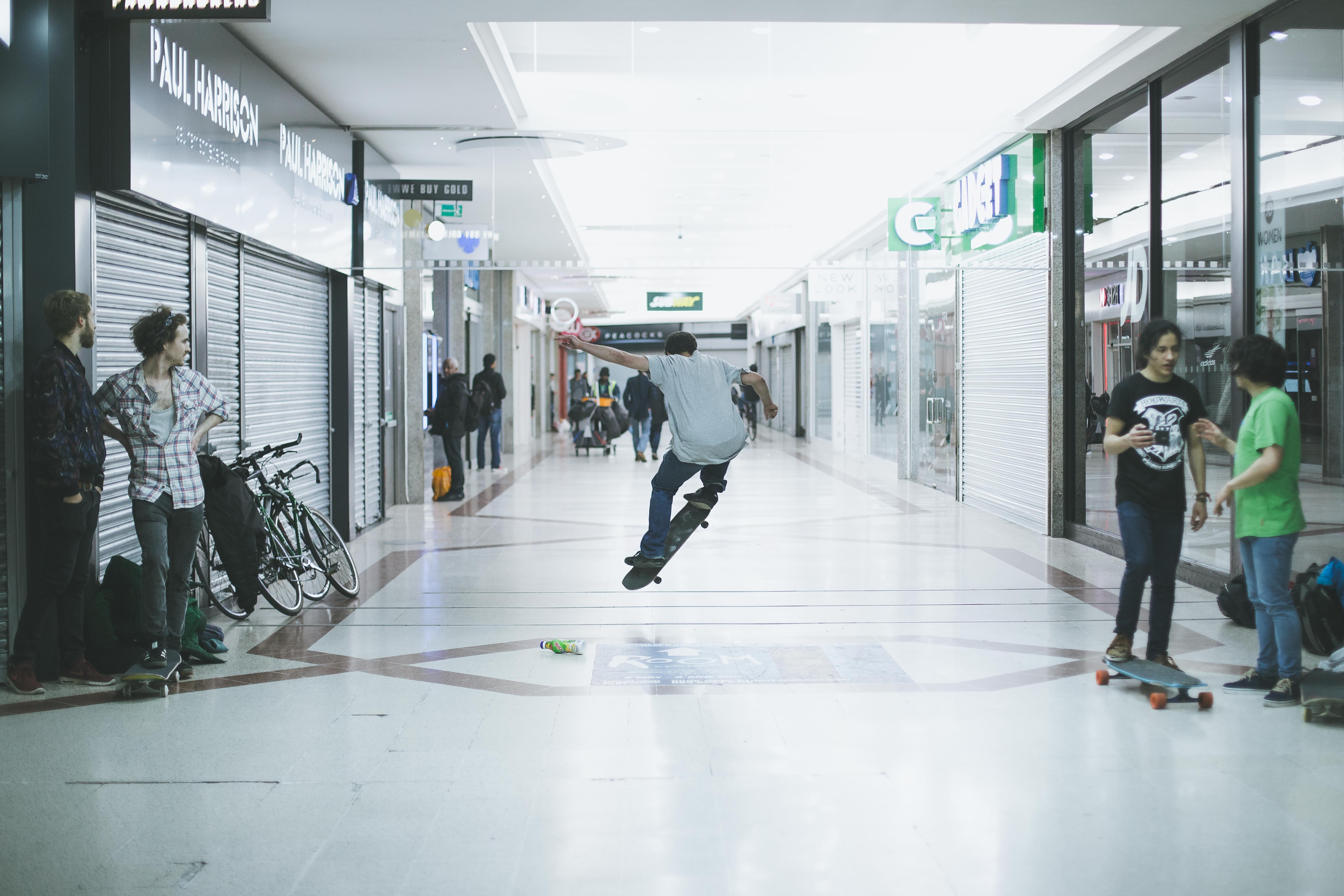 “The best thing about skateboarding is that you can do it everywhere. It’s different and similar wherever you go, just like music.” The world is quite literally your skatepark.

Skating can provide you with an oasis of calm

Palestine got its first ramp in 2013, and since then skating has been connecting young Palestinians surrounded by conflict. Skate instructor Abdullah Milhem, who lives in the city of Qalqilya, in the northwest of the West Bank, describes how skating has changed his life:

“Where I live, we are surrounded by walls – now I try to wall ride them! I have friends in Israel that I skate with. When I went over there, we skated together and it was peaceful. When you see other skaters you instantly connect. It’s like a universal language… a peaceful form of resistance.”

And it can change the world for the better 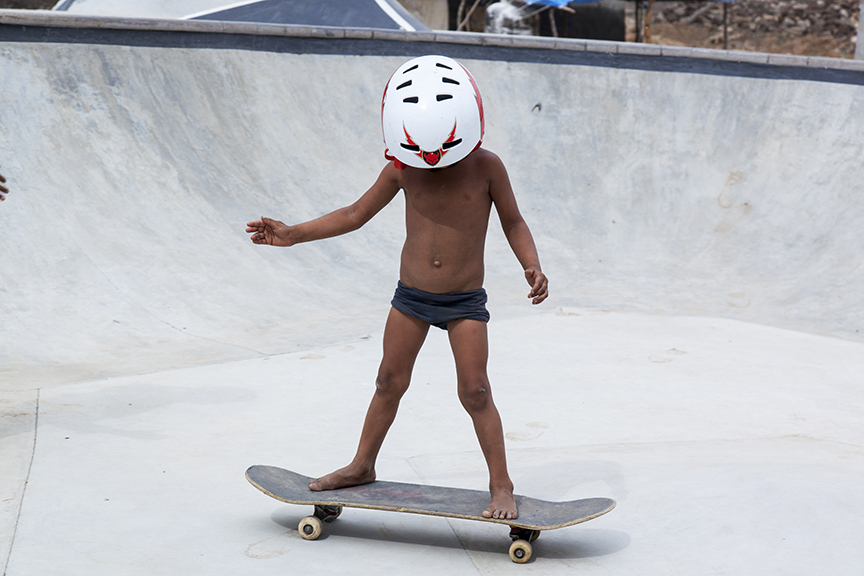 “The children really embraced the park, they took over ownership and responsibility, and it very quickly became their place to be,” she said to us about the project. “With only two basic rules, ‘No school – no skateboarding!’ and ‘Girls first!’, the project grew – self-organised within a given frameset. The kids don’t have to ask for any permission – it’s open for everyone.”

It’s really not just for the young

“Most guys my age are done, but I said when I was eighteen that I could mark my own time… I’ve just been living life like this for quite a while. I live in my own time zone – I see the world the way I want to see it because it is my right as an individual. And I learned that pretty much all from punk rock and skateboarding.”

And finally – forget the rules

We’ve had the pleasure of working with DIY legend and world renowned photographer Ed Templeton with the UK’s debut Deadbeat Club exhibition last month. But back in 2007 he spoke to us about how skating shaped him growing up to become creative and proactive.

He explains: “Creative types and skateboarding go hand in hand. Nobody sits you down and explains the rules to you. You just do it.”

Linkedin
RELATED ARTICLES
OTHER ARTICLES
A new book traces the legislation’s tumultuous history and the lasting impact its had on LGBTQ+ activism today.
Photographer Alice Mann reflects on capturing the camaraderie and discipline it takes to succeed in a highly-competitive sport.
Photographer Melanie Nissen recalls capturing the characters, fashions and rarefied chaos of a rapidly-expanding set of punk bands who helped to redefine the genre.
The novelist discusses his electrifying debut, which offers a deft examination of masculinity under late capitalism.
Photographer Yan Morvan revisits a radical moment in history, which saw the emergence of a fiercely-rebellious spirit among the UK‘s youth.
As the role of the nuclear family is increasingly called into question, people are finding new ways to exist outside heterosexist norms.