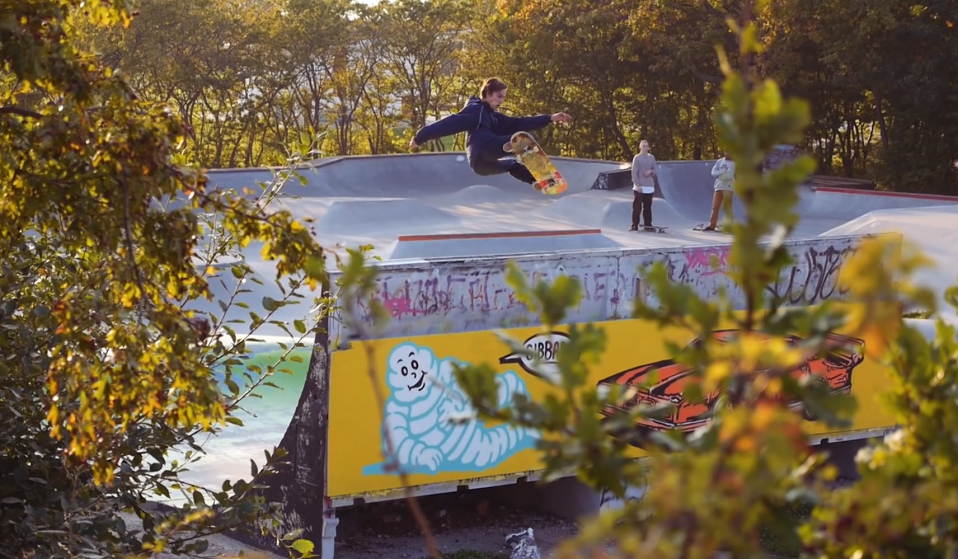 Filmmaker Phil Evans' catches up with the likes of Questions, D-Boy and Rabia in new short series of films The Lightbox Project.

Filmmaker Phil Evans' catches up with the likes of Questions, D-Boy and Rabia in new short series of films The Lightbox Project.

It’s a rare and great thing when you find a storyteller embedded in a storied, but difficult-to-penetrate, underground culture. Filmmaker and skateboarder Phil Evans is one such oddity.

Growing up skating in Bray, just south of Dublin, Ireland, Phil felt compelled to document the characters and carnage of his local scene and, unlike most of his contemporaries, his work continued to develop in more anthropological tones.

I first encountered his filmmaking in Format Perspective – a contemplative Super 8 film that explores the work, lives and opinions of six European skate photographers. His style – collage-y, textural, bleeding at the edges – immediately set him apart from the pack and follow-up projects The Panoramic Series and Coping Mechanism were equally as avant-garde and cerebral in their approach.

His new series of films The Lightbox Film Project, in collaboration with Levi’s, further Phil’s oeuvre of character-based skate storytelling. The experimental edits, which Phil created with free rein, are sincerely nostalgic and philosophical while also channelling the humour and energy of the subjects at their heart.

We caught up with Phil to find out more.

Where did the idea for The Lightbox Film Project come from and why were you keen to do it?
I’m not sure where it came from, I had a mental list of a bunch of ideas I’ve wanted to see happen throughout the years and this project was the perfect opportunity to see them come to fruition. I pitched some ideas to Levi’s and they seemed keen – I also retained complete freedom to do whatever I wanted and I got to change my mind quite a lot which is really really rare but not something I take for granted.

How did you decide who to shoot for it? It’s an eclectic line-up…
Haha, it certainly is! The entire project started really organically – D Boy got in touch with me to say he wanted to film “one more video part, really proper”, which I was quite enthusiastic about as I knew he’d been out of the scene for years – so it was like a Rocky style come-back. That’s where it started, just shooting a part with D Boy, but then it developed into a lot more.

With Craig Questions, we’d been discussing for a few years the idea of ‘what a real skateboarder is’, so that’s been lying in the back of my head. Craig is one of the most interesting people I know and he’s really fun to travel with as it never gets boring, so that was kind of a no brainer for me – plus the fact that him and J-Mag crossed paths was perfect, they’re both weirdos in their own way so they ended up sharing a lot of views on skating.

The Grey edit line-up was mainly thanks to Henry Kingsford hitting up guys on his end – everyone who came on that trip wanted to come – no one was being forced to participate by their sponsors which I think gave the whole thing quite an authentic feel. It was more like a holiday than a mission, except they all ripped!

Daniel Rabia is a young styler from Malmö who my friend Martin showed me footage of so it was an easy decision to get him involved. And everyone involved behind the scenes are all really good friends that I enjoy working with, so this was a nice opportunity to take it further – Mike O’Shea with his illustrations, Erik Nilsson with his design skills and Gibbo with his lo-fi beats.

What did you shoot it on? Who did the graphics? And can you tell us a bit about the editing style? Were you referencing old skate videos? It kind of looks like 90s MTV to me… split screen, that neon green, cut and paste, vhs.
I shot on quite a few cameras – the Grey edit was shot on a bunch of different Super 8 cameras. D-Boy’s vid had a variety of formats – from a Fisherprice PXL 2000 (shoots on audio cassette tape), to Hi-8, Super 8 and HD.

The 90’s looking footage is Hi-8 – it happened kind of naturally. I was shooting Craig on HD and I just kept getting the feeling that it wasn’t suiting him – he’s too grimy and he needs a grimy format. So one day in the middle of one of his trips I switched to Hi-8 and it immediately felt natural – that’s why that edit switches from HD to crappovision. As far as the editing style there was no direct reference, I watched way too much TV as a kid so there’s probably bits of A-Team, Dallas and who knows what in there – the logo and graphic identity were done by my eggcellent hombre Erik Nilsson.

Why did you want to take a more experimental/less straightforward skate edit/documentary approach?
I guess I’m bored of regular skate videos? It wouldn’t do anything for me unless I felt I was doing something fun/creative/new.

How did the Tony Hawk interview come about? Genius pairing.
Very last minute! I heard he was coming for Vert Attack so I rang Craig a few days before and he was super down to come – it was tough to pull him aside as he constantly had a mob of people asking for autographs, selfless etc. but J-Mag asked him and he saw Craig and he agreed to do it – maybe he knew he wouldn’t be getting a standard issue TV style interview? Cool that he did it!

Do you think about an audience when you’re making these films – do you hope it appeals to non-skateboarders?
Not really – I’m of course aware that some of it is a lot more accessible to non-skaters, but that’s not why I do it. I want the subject of the film to be happy with it first of all, but the rest I’m just trying to make something I’d like to see.

Do you think you’d ever get bored of skateboarding as a subject? Seems endlessly inspiring as it’s always reinventing itself…
Well I’m not bored of going skating so I don’t think the urge to document it will go away – that being said it’s good to take a break and work on something that has no connection to skating, then I feel refreshed and want to shoot skating again.

What’s next?
I’ve been chatting to Mike O’Shea and Gibbo about doing something new so lets see what happens.