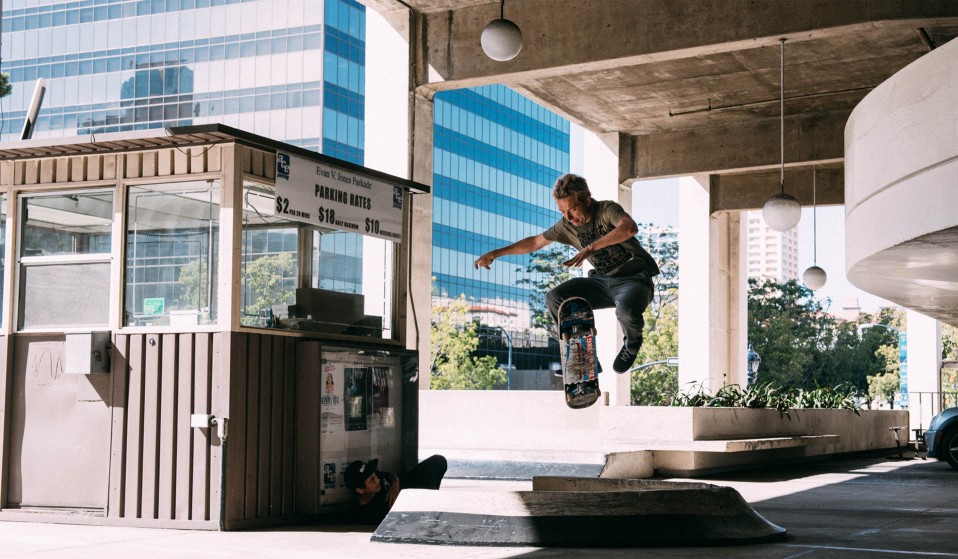 In the first story from Levi’s® Skateboarding Special II: Stories of Independence — our annual Skateboarding collab with Levi’s® — Cali transplant Marius Syvanen explores the importance of keeping his Finnish heritage alive no matter where he lives.

In the first story from Levi’s® Skateboarding Special II: Stories of Independence — our annual Skateboarding collab with Levi’s® — Cali transplant Marius Syvanen explores the importance of keeping his Finnish heritage alive no matter where he lives.

Depending on which Finn you are talking to, the word ‘Sisu’ is explained with varying interpretations – from inner strength, resilience and stoic determination (these guys took down the Russians at their own game after all) to pride for the Finnish national character. For Marius Syvanen, Finnish pro skateboarder raised in the suburbs of San Diego, it means ‘Finnish pride’, something he has an abundance of.

If Marius’ name doesn’t give away his Nordic roots, his blonde hair and piercing blue eyes are an obvious nod to the country he grew up in until the age of five. “My parents moved here for work back then and we were meant to stay one year. It’s been twenty now,” he laughs. Not that he’s complaining. San Diego, and the US skate scene, has given him a life that would have been hard to come by back in his native land where no matter your talent level, you can never really break out. 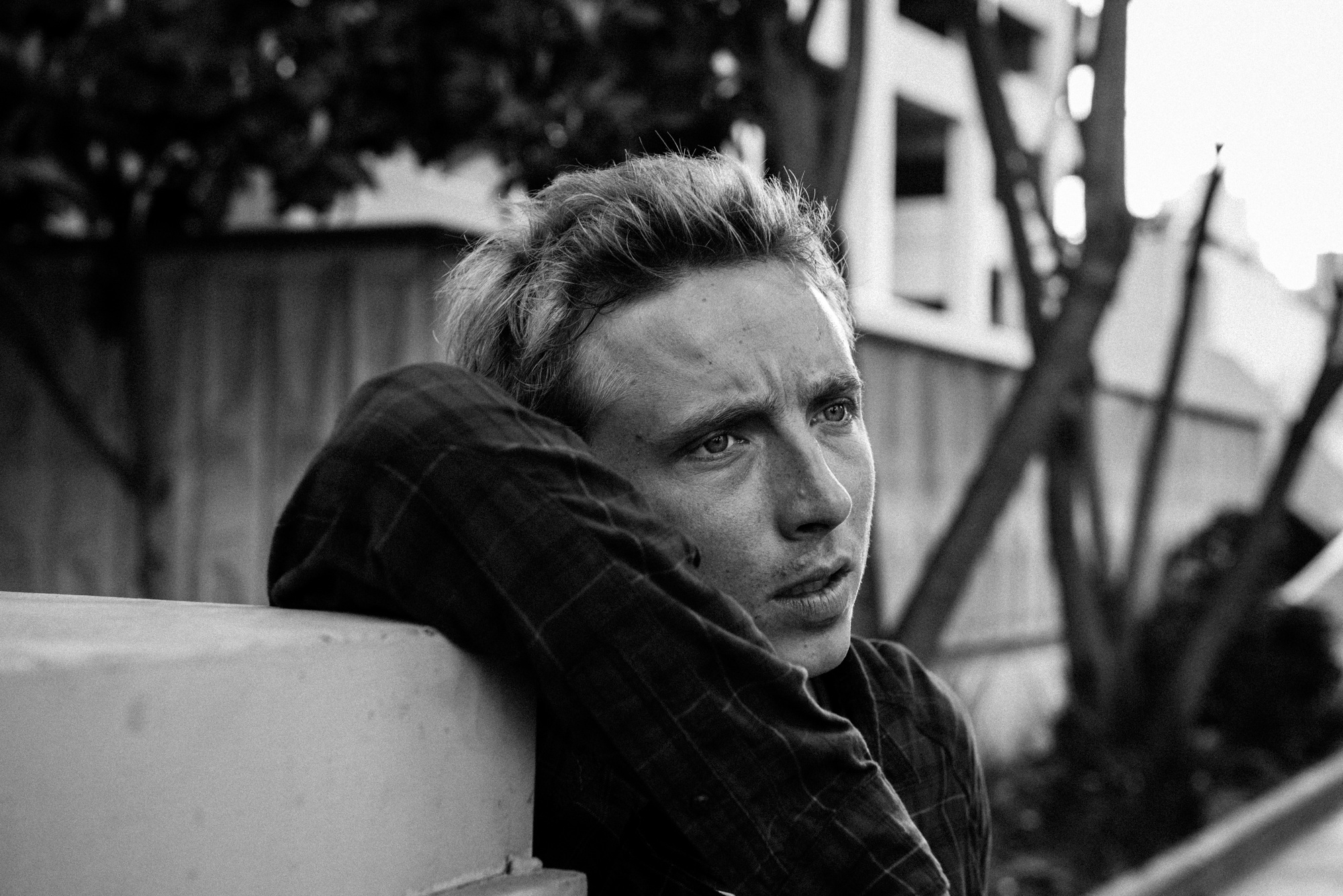 Stateside, however, Marius was able to turn pro – with sponsor Habitat – less than a year ago and life just keeps looking up. He might have been appearing alongside the big pros in skate videos since he was young, but Marius has now truly come of age and his latest full part in Transworld Skateboarding‘s Outliers video speaks volumes about the fearless, fluid style he is well recognised for.

I meet Marius not far from the home he shares with his parents in the wealthy North County beach town of Del Mar. It’s a typically sun drenched, Southern Californian morning, and women flit by like birds dressed in yoga pants while a few casual business men grab a post-surf coffee. It’s a more upscale scene than the slightly grittier and more youthful town of Ocean Beach where he typically hangs out with his skate crew, just a few miles south from here. 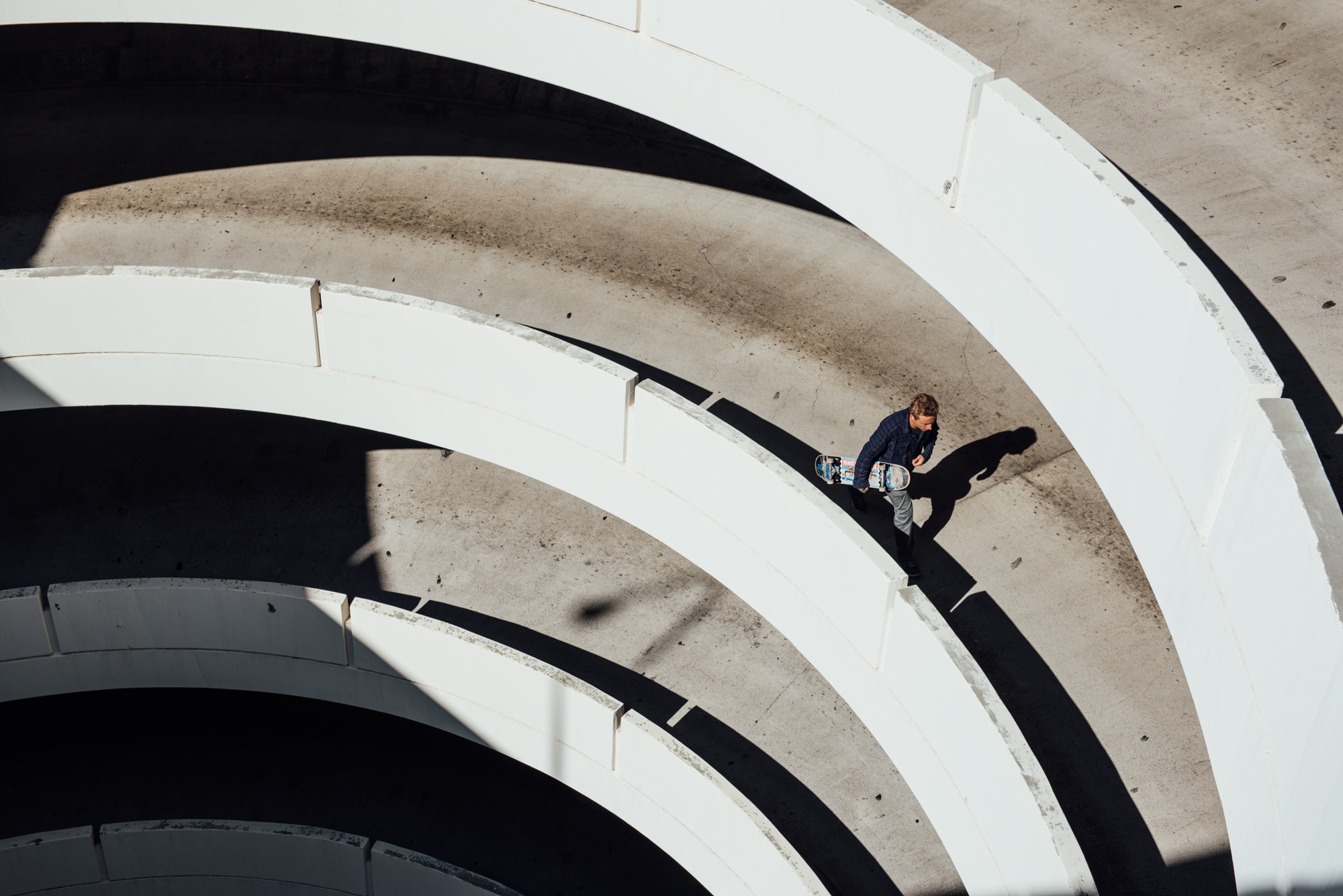 Marius tends to keep San Diego in the rear view mirror more often than not though with over half his life spent on the road. Right now he has just returned from a trip to coastal Patagonia. Not your typical skate stop. “We hit four cities on the coast,” he explains. “It was the first time international dudes were coming down there to skate. Bit rough, but cool. They were stoked. We did one skatepark opening in one little city and we were on the news. I was in Bolivia last year,” he continues.  “I’ve hit every continent, I’m pretty stoked on that! It’s always good to keep it moving.”

The art of travel was instilled in him from young by parents committed to taking the young Marius back to Finland every summer for at least a month; in part to visit family, and in part to make sure he kept up his Finnish fluency (he is completely fluent, something I witness first hand when Finnish snowboarder Jussi Oksanen swings by to say hi). His mom actually founded the Finnish school in San Diego – where Marius was a weekend student for years – and Finland clearly runs through his veins with fervor despite living in the States since he was five. 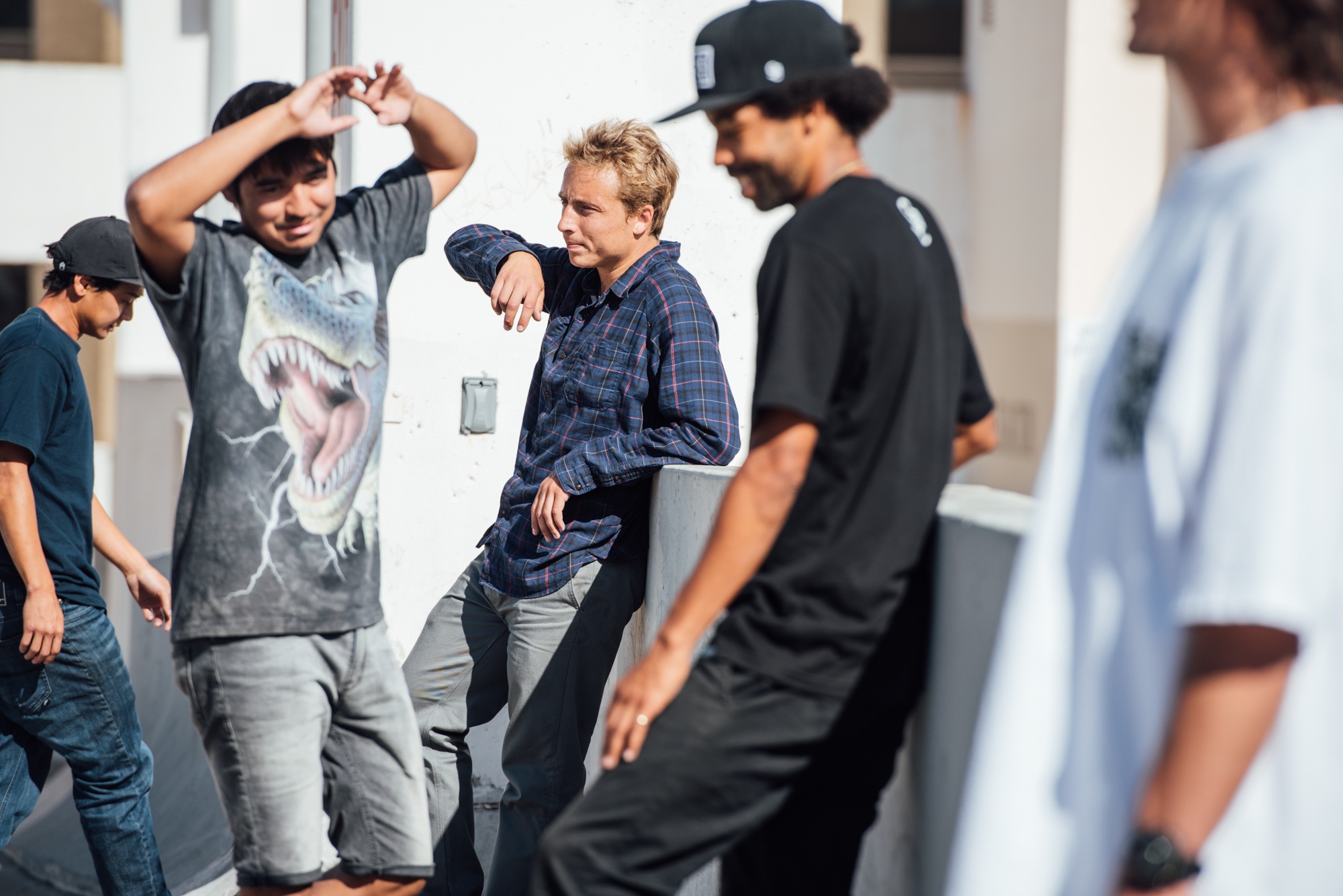 “I identify as Finnish for sure,” he says. “I don’t want to be classified as American. I’ve been back every summer… I like to think of myself as a Finn.” Technically, he is Finnish from a legal standpoint too. For someone who sounds American, lives American and to the outsider is American, he doesn’t actually have permanent status here yet. “I’m still not a US citizen,” he says. “I’m still on a Green Card. Mine doesn’t expire until 2017. I’ll probably do it then.” Now he’s got an extra motivation to kick the citizen process into gear because of the trouble he gets every time he re-enters the States.

“I got a DUI four years ago and some weed charges,” he explains, “and I get sent to secondary every fucking time I come back into the States and they hassle the fuck out of me. Like just now, I got back from Argentina and they sent me to secondary and asked what I do in the States, why I am here, and all these questions and I’m like, ‘Man, I’ve lived here like twenty years!’” 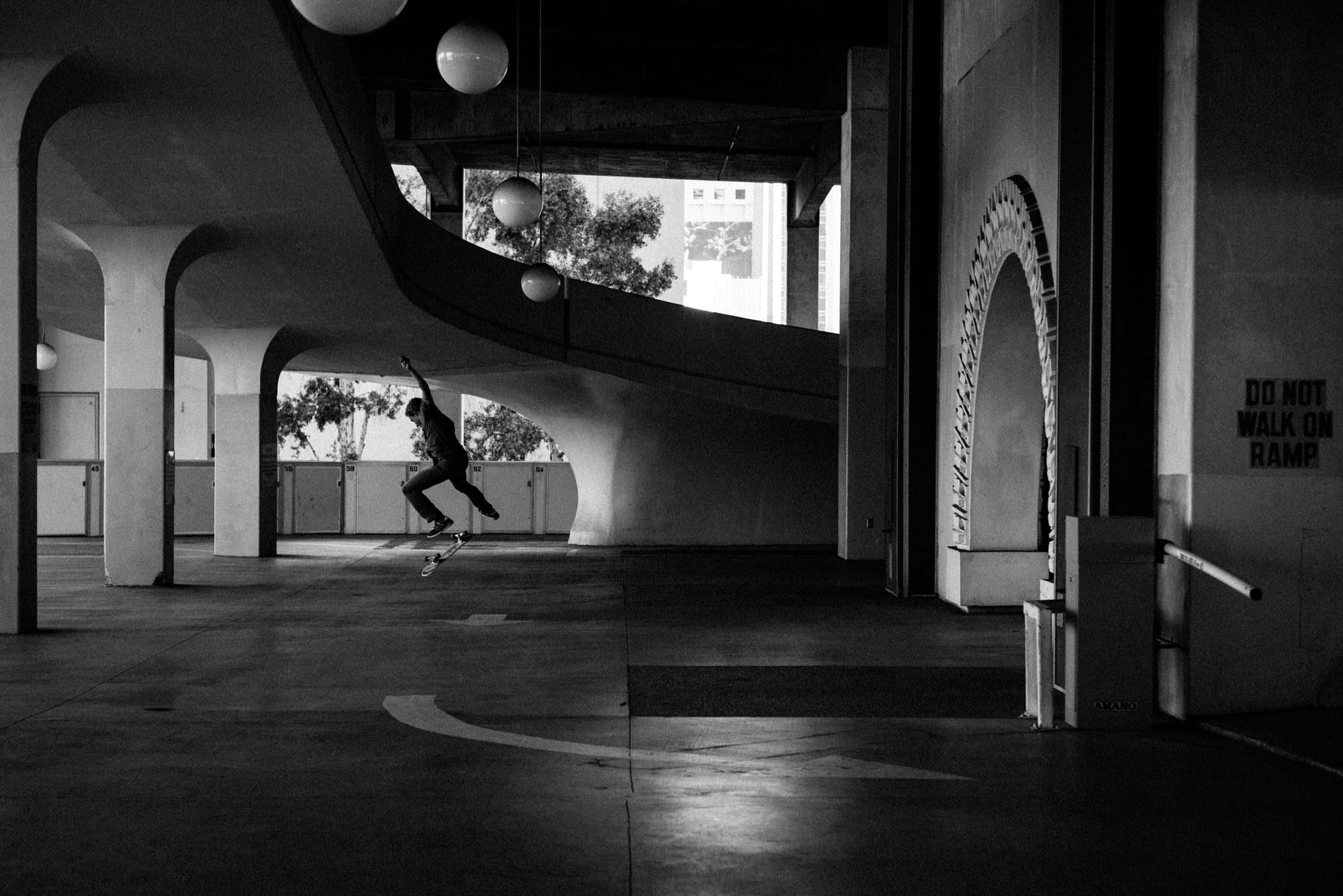 Questions of citizenship aside, Marius’ life is equal parts American and he lives local skate culture no differently to his US-born compadres. Every Sunday afternoon Marius and about twenty of his friends go about their local tradition, something called The Run. “It’s a tradition that’s been going on for like twenty-plus years now,” Marius says. “We took it over, our generation, and we start in Balboa Park, on 5th and Quince. It’s like a two-mile bomb – just a bunch of hills and different streets into downtown and we end up at this parking concourse downtown and then we hang out on top and just bomb down the eleven-storey spiral and keep skating downtown after that. It’s a cool Sunday tradition. It’s nice, when the sun’s going down and we just haul ass in downtown with a bunch of guys.”

When talking of Finnish skateboarders living in the US the first name to come to mind is Arto Saari. I ask Marius how much of a role he has played in his own life. “Arto is my biggest influence for sure!” he says. “My email when I was a little kid was artoistheman@yahoo.com.” But the two didn’t really connect until they both took part in a demo at a local skatepark during the San Diego Finn Fest a couple of years back. We talk a little about Arto’s travel sauna – no conversation with a Finn is complete without some discussion of saunas – which brings me to the question: clothes on or off in the hot room? “Naked, of course!” he says. “It was definitely a bit weird the first couple of times American friends went naked in the sauna with me at my parent’s house though. It’s a funny thing over here… It’s a Finnish tradition. People here have a hard time with that.” 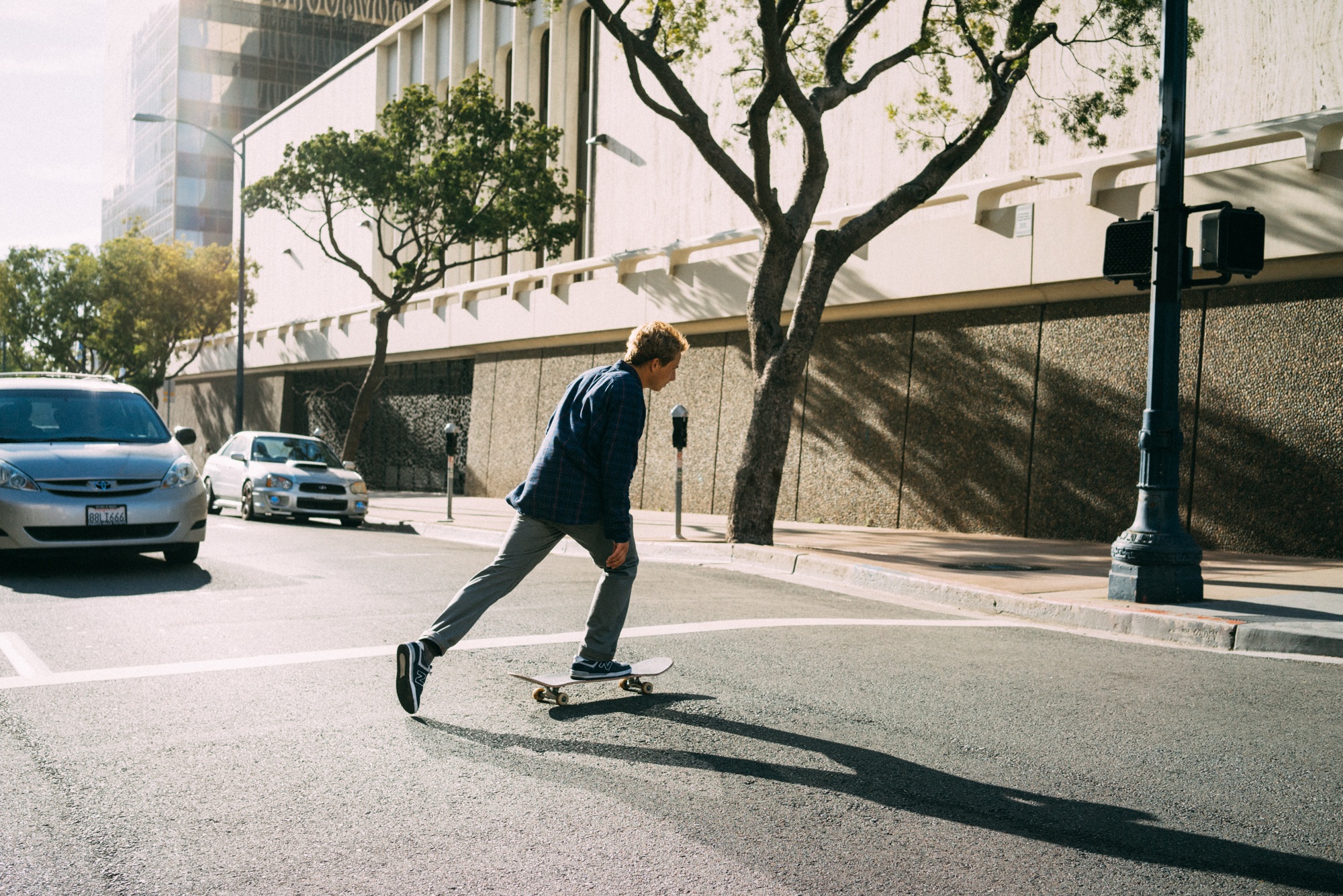 One less appealing factor that looms in every Finnish male’s life is the obligatory army duty. For Marius, despite the fact he lived in the States since age five, the rules were no different. At age eighteen the Finnish army flew him back to Finland to do his required six months. “The Finnish army paid for my flight,” he says. “I was committed. I told all my friends that I’d see them in six months. Then I got on the base and was there for pretty much six hours before the doctor saw my papers, saw I had a screw in my wrist, and told me I was not fit to do the army! If I hurt my wrist the army would have to pay me for the rest of my life. So I got out of there right away. I was in Finland for another two weeks partying and stoked, but when I look back now it would have been cool to do it even though I was stressing at the time.”

Being prepared to put his career on hold for six months and do his time in the Finnish army to keep his Finnish passport shows a deeper level of commitment to the country he hailed from probably more than anything else and it takes us back to that Finnish sisu thing again. “Remember MySpace?” he asks. “You could have some writing next to your name and next to mine was Suomisisulaperkele – “Finnish pride bitch!” he laughs. “Finnish sisu is huge for me. I’m all about it, all about it.”

Linkedin
RELATED ARTICLES
OTHER ARTICLES
In the first video to celebrate our annual Skateboarding Special, in collaboration with Levi's Skateboarding, we follow Finnish skater Marius Syvanen around the personal spots that have made San Diego home.
Independent characters from skate culture – like K-Dub of Oakland's Town Park, Antisocial head honcho Michelle Pezel and Palestine skate charity SkatePAL – explore what it means to go it alone.
In our first story from The Commuter Journal – a cycling paper made by Huck and Levi’s® Commuter™ – we explore the booming bike revolution in Cuba, a country in the throes of change.
Beautiful new short documentary Skateboarding in Oakland shows how a skatepark can be a force for positive change.
Huck heads to Long Beach, CA, to check out skater Al Partanen's vinyl collection.
Skater-turned-woodcrafter Joey Pepper constructs a beautiful hand built canoe in his dusty workshop in Brooklyn, NYC.