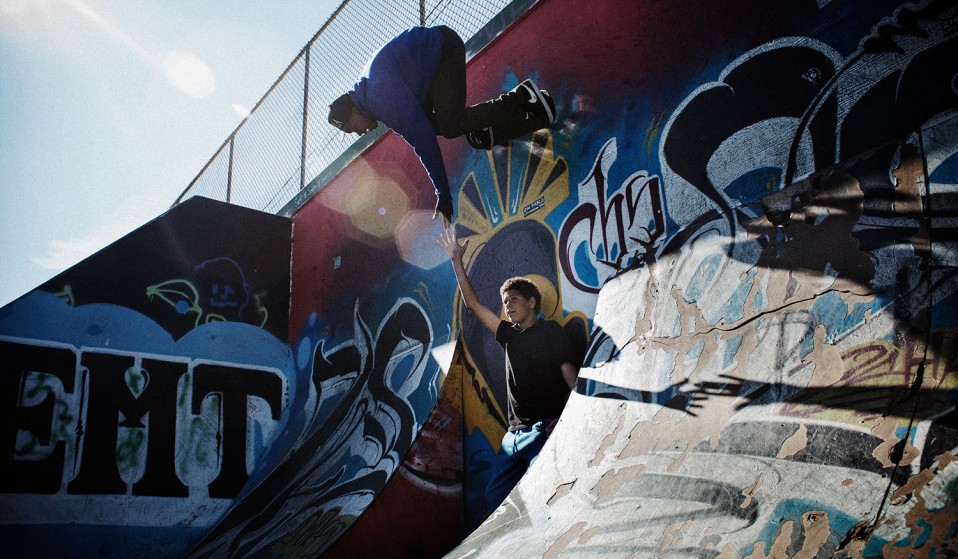 In our latest story from Levi’s® Skateboarding Special II: Stories of Independence — our annual Skateboarding collab with Levi’s® — we meet teacher-turned-DIY skatepark creator Keith ‘K-Dub’ Williams, whose relentless hard work has given the skaters of Oakland a unique space to call their own.

In our latest story from Levi’s® Skateboarding Special II: Stories of Independence — our annual Skateboarding collab with Levi’s® — we meet teacher-turned-DIY skatepark creator Keith ‘K-Dub’ Williams, whose relentless hard work has given the skaters of Oakland a unique space to call their own.

It’s a late-afternoon Tuesday in downtown Oakland. The sun gently glimmers on the skyscraper windows, a man wearing dirty jeans and a ripped American flag coat pushes a rusty metal shopping cart in front of City Hall. Upstairs in the main chamber, the council hears an elderly woman’s noise complaints as a former skater-turned visual artist prepares his statement on the next phase of his West Oakland skatepark.

Keith Williams, better known as K-Dub, is 6’5”, 250lbs, and keeps his dreads tightly wound under a forest green and California gold ball cap. He is the founder of Oakland’s first official skatepark called Town Park. He’s an artist, teacher, community leader, father, mentor and the Godfather of the Oakland skatepark scene. 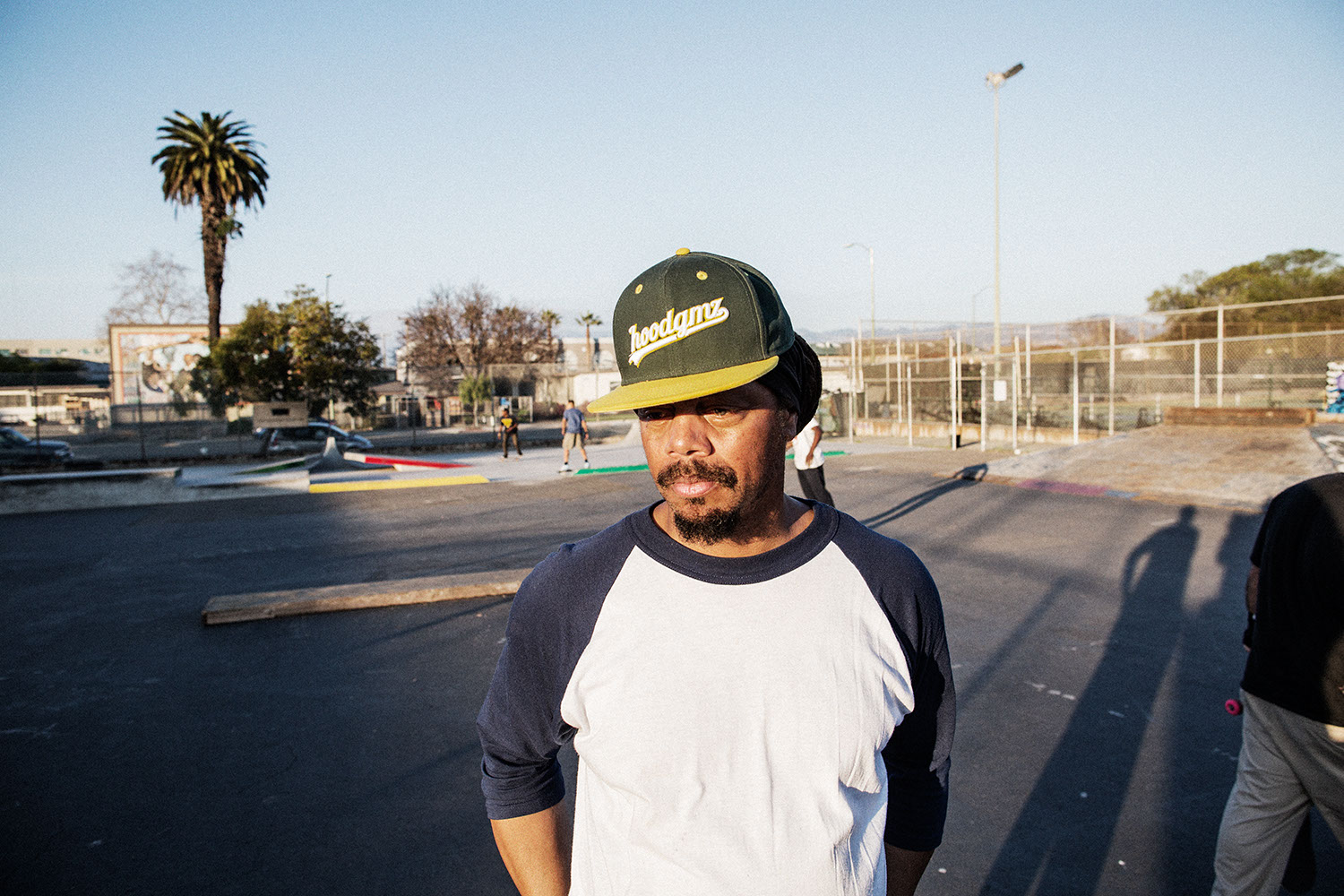 In 2005 using hand-me-down wood, volunteer carpenters, and some local support, he opened Town Park in a neighborhood of run-down industrial buildings and residential properties.

On this particular Tuesday, K-Dub stands in front of eleven city council members, proposing the second phase of construction for his beloved park. What started as a grassroots endeavour has transformed into a city-wide project – even the mayor is in on it – in the heart of a rough neighborhood in Oakland’s westside.

“My whole thing was always to bring it to the city,” he says. “Show the politicians and the city council, and Parks and Rec, like, look what we got here. Look at your community of young people who are into this recreation. Let’s bring it downtown and let’s get our spot.” 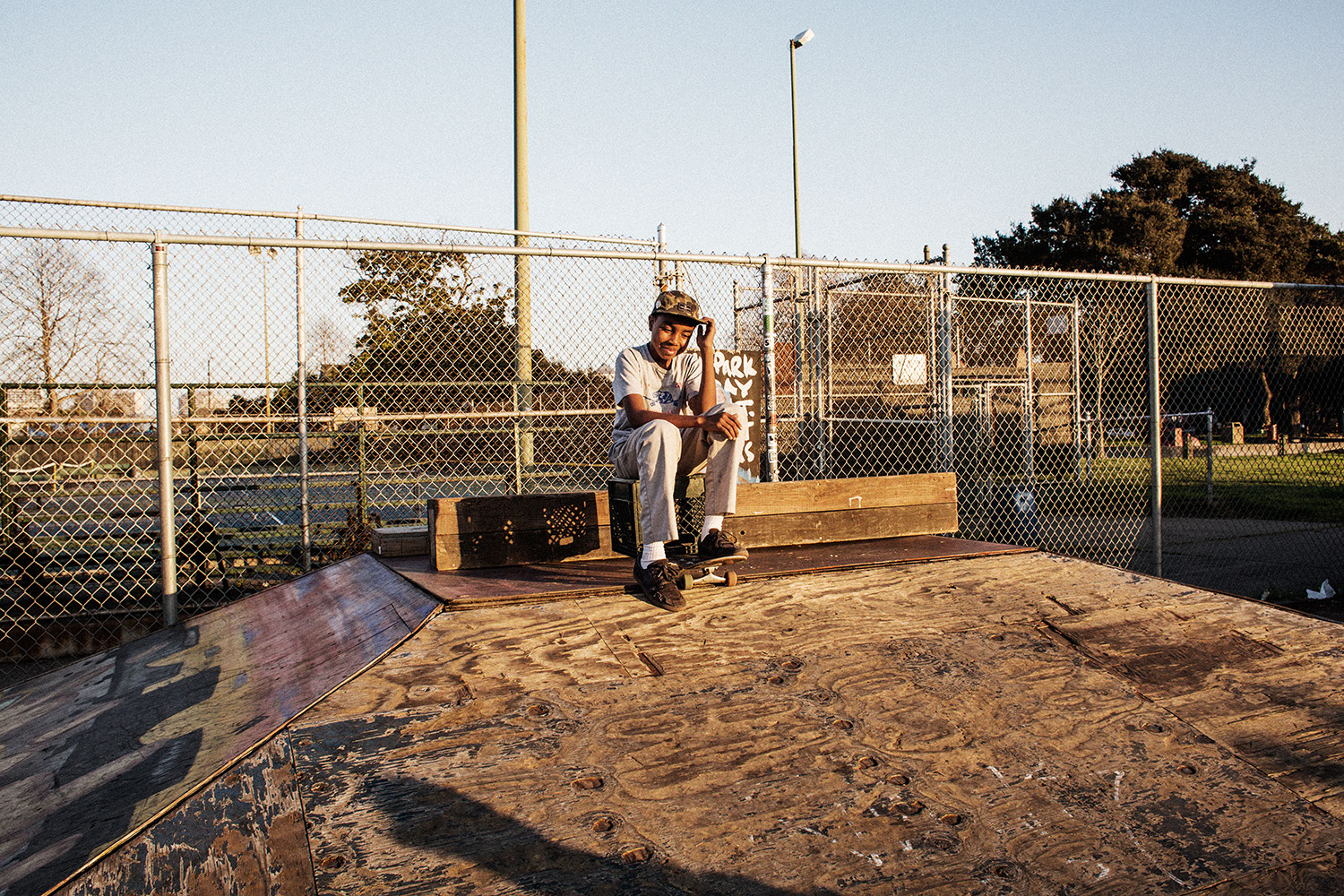 Street skating was born in San Francisco in the ‘90s, but in Oakland, football, basketball, and baseball continued to resonate with the local kids. A strong skate scene didn’t develop until much later.

“A lot of people really didn’t like skateboarding when I was coming up. A lot of people were like, ‘You’re a white boy because you skate.’ It was really looked down upon, but now, look at it,” says local skater Sean Hunter, who landed his first kickflip aged twelve. He’s twenty-six now, lives in the neighborhood and skates daily. 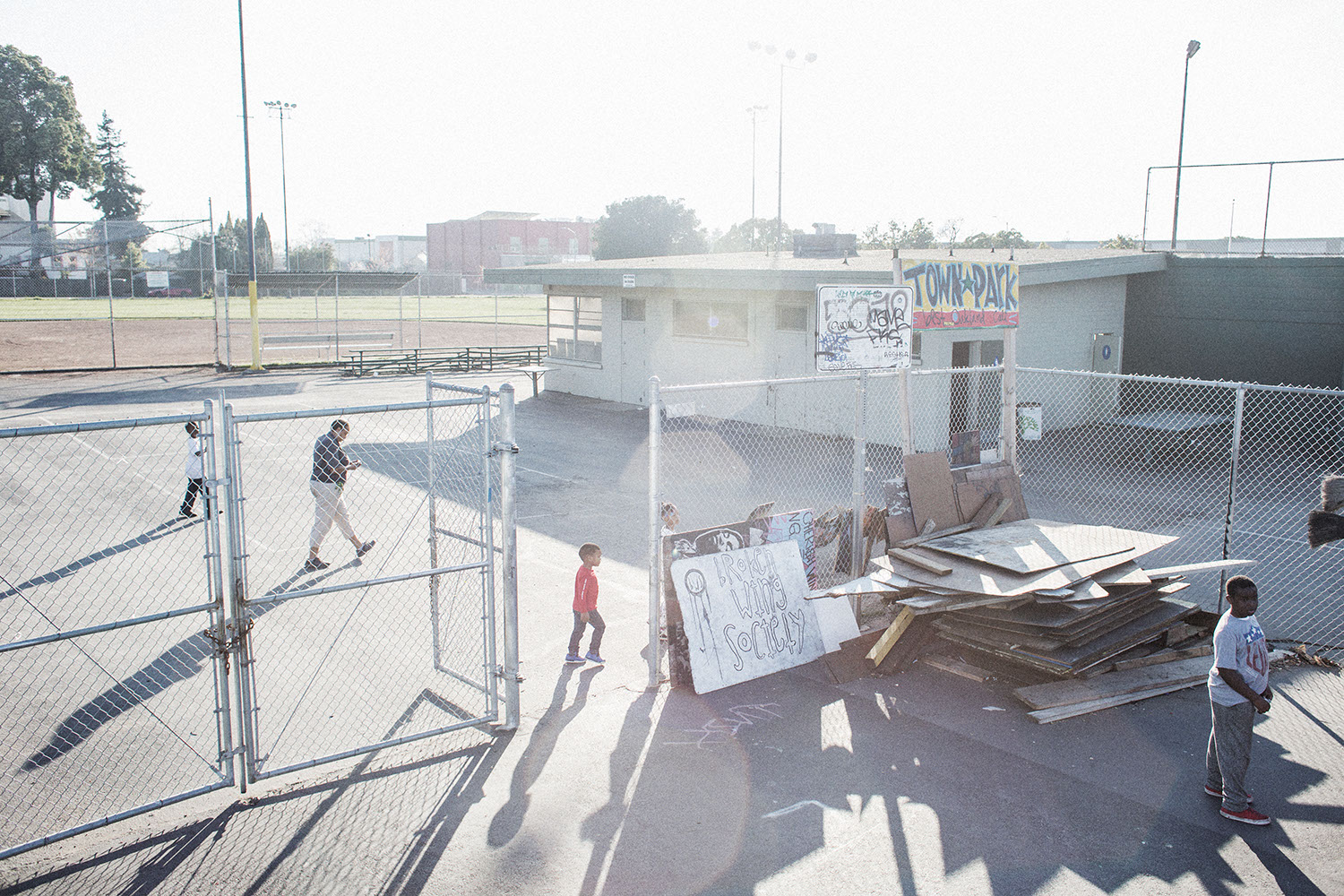 “I’m back here skating because I can’t stop,” he says. “There’s a little bit of everything here, you’ve got obstacles that other parks don’t really have, like these barrels, here. You’ve got young kids, they don’t even skate, but I’m pretty sure they’re going to start skating soon. The diversity and the skating are coming together.”

As he speaks, his eyes take in the park’s best features: the beat-up grind rail, the smooth cement bowl, the colourful quarter ramp, the Jersey Barrier, and a melting pot of diverse young faces. Right now, two six-and-seven-year-old African American boys are chasing each other on beat-up razor scooters while a group of Latina middle schoolers giggle as their boyfriends skate in circles around them. Two girls emerge in matching black hijabs and they stroll along the fence inside the park to watch the action.

“You can’t really sum this place up in one word,” says Sean, “It’s too hard. There’s diversity, creativity, art, people bringing music, starting barbeques, I’m so grateful for it.” 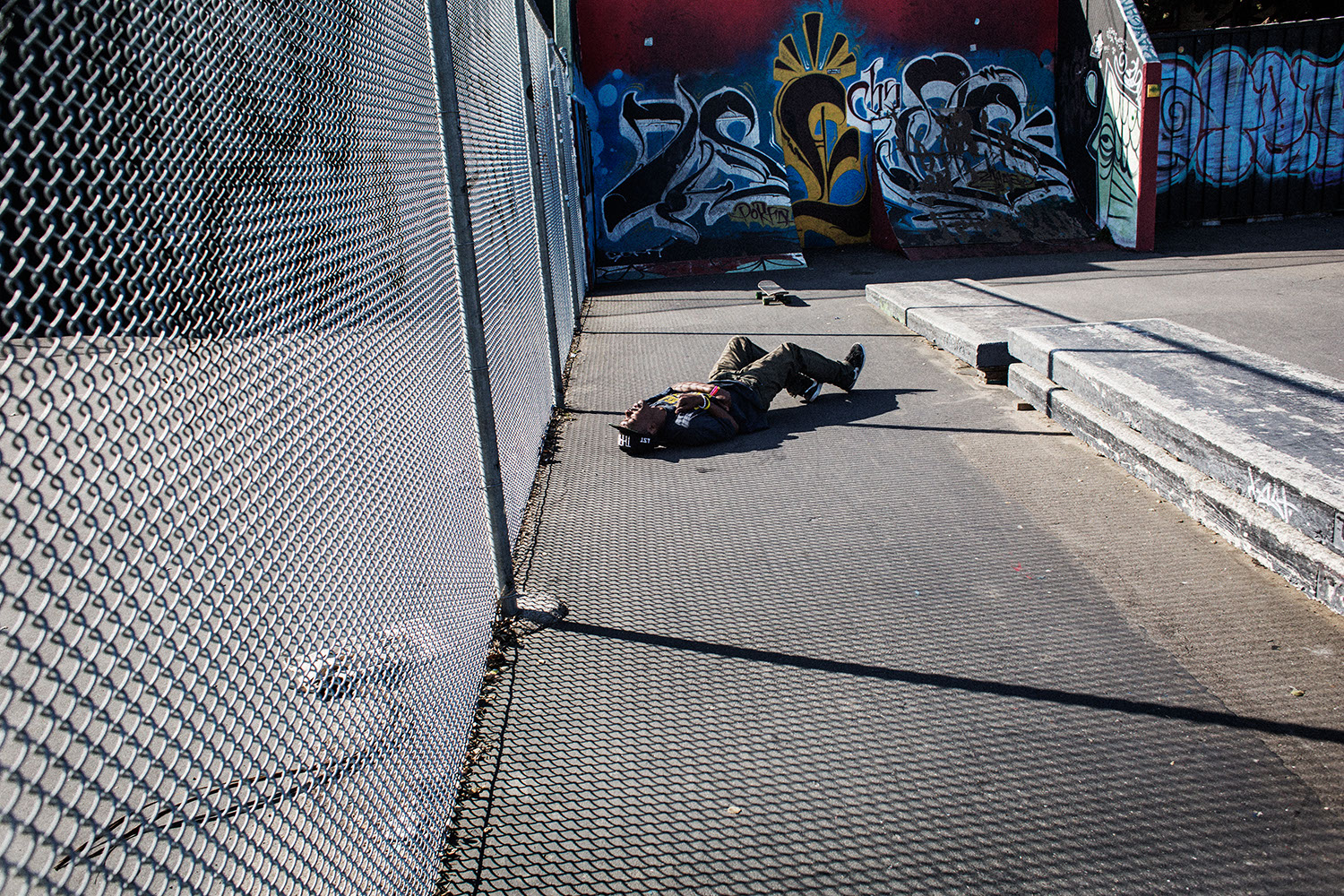 It all began in 2005 when K-Dub started his own version of the X Games. Tha Hood Games represented a new kind of diversity in skateboarding. It combined all the elements of hip hop: the music, the art, the fashion, the graffiti and skating. Tha Hood Games 2 quickly followed the success of the inaugural event, and this May marks the fifty-third Hood Games and a ten-year anniversary.

Back then K-Dub was Oakland High’s cool art teacher – the one that bumped roots reggae loud in his classroom, the one that compelled students to hang out long after the bell rang. He started a skateboard club, convincing parents to take their kids after school and on the weekends to Berkeley’s skatepark. Eventually he decided those kids should have their own place to skate in their own neighborhood.

With the help of Ben Winslow, owner of Oakland’s only skate shop, Clean, K-Dub began realising his vision. After successfully blocking off three downtown city streets for Tha Hood Games 4, the East Oakland Youth Development Center provided an entire parking lot to host the next one. The skate events were remarkable – pros showed up, free decks were handed out, and the locals skated their asses off – but they were always temporary, always moving around and changing. There was no permanent skate scene in Oakland, and that’s where the real story begins. 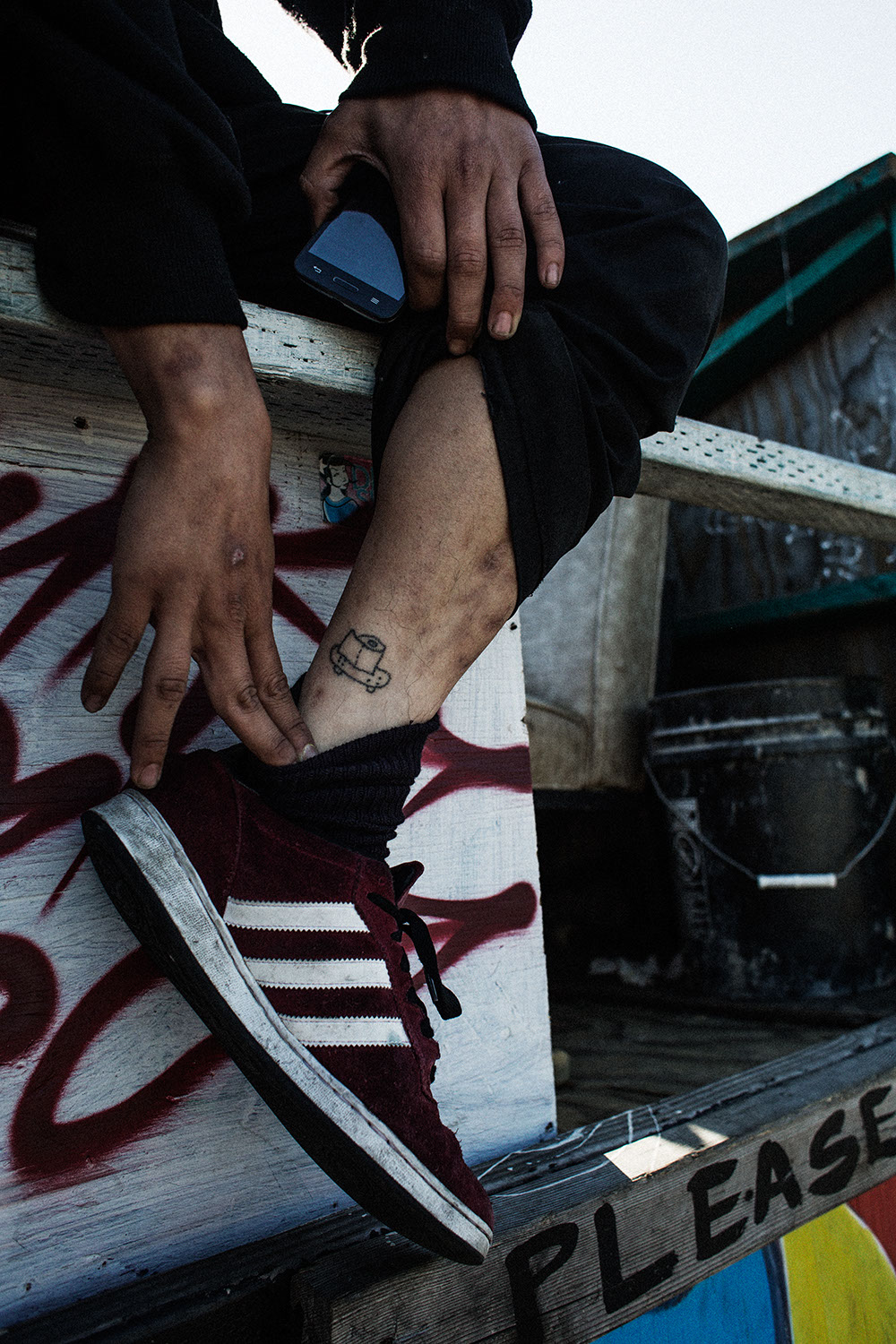 DeFremery Park was dirty, balding and empty. Dilapidated tennis courts and overgrown baseball fields were abandoned even on the sunniest days. The powerful voices of the Black Panther Party that once echoed across the park had long since faded away. It was historical but decrepit, and in 2007 K-Dub saw opportunity in a vacant parking lot sitting on the northwest corner.

“I talked to the city and they were like, ‘Alright we’ll give you this spot, let’s see what you can do’,” says K-Dub. “So myself and a beatnik crew got to work.” 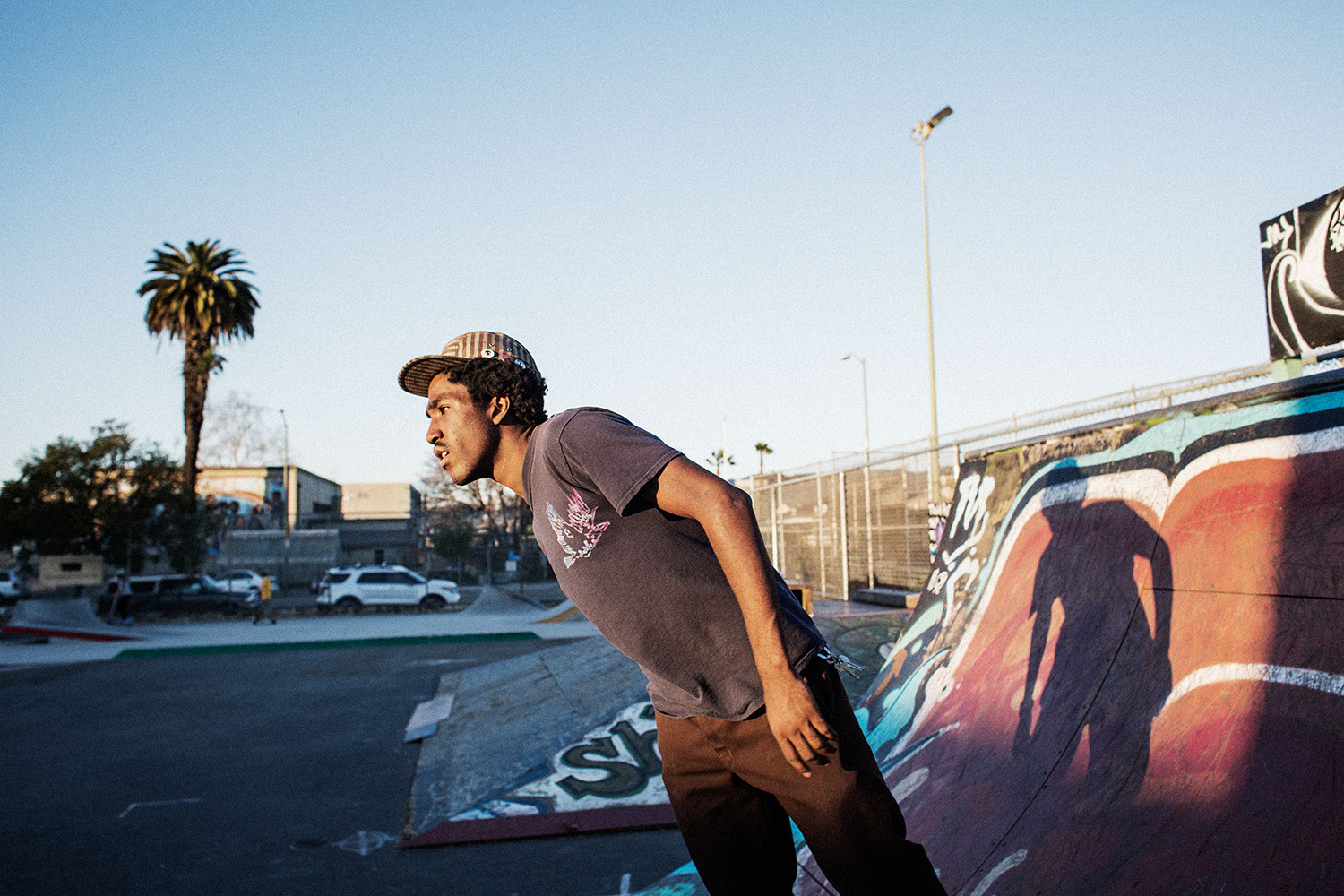 They foraged wood from a former YMCA skate park thirty minutes away. It took them eight months to break it down and bring the wood to West Oakland. At first, City officials were watching their every move, but eventually pitched in, built a fence and repaved the park. It was surreal for K-Dub.

“That was all very new to Oakland, as far as the skatepark went,” he says. “I didn’t work for the city, I was a teacher and an artist, but they gave me keys and allowed me to do my own thing, so we kept building.” 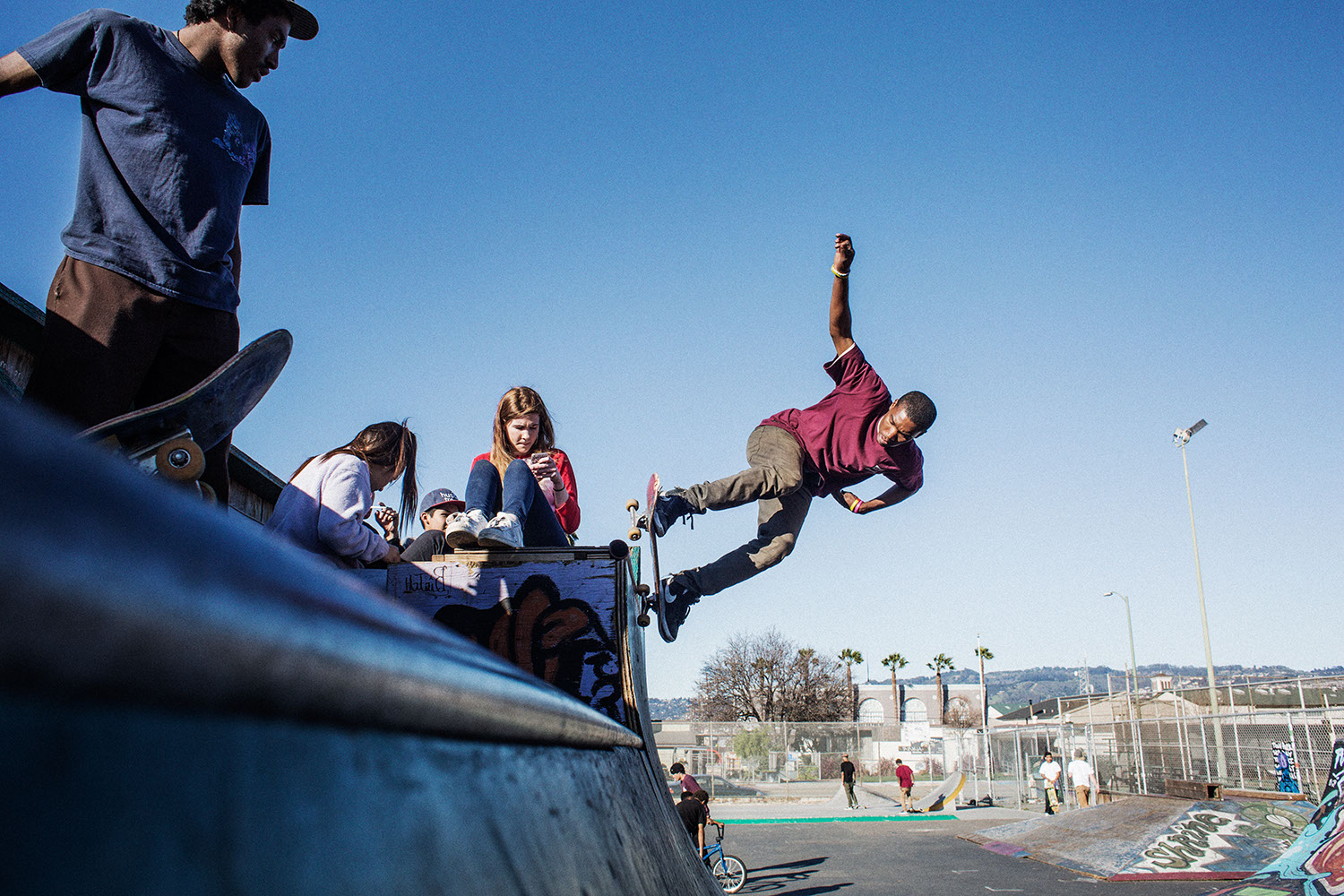 Now, DeFremery gets more use than any other park in Oakland. “Town Park used to be a no man’s land. It was super gnarly and haggard,” says twenty-year-old skater Sam Buchanan, who drives for forty-five minutes to get to the park. “The place looks like a high-end skatepark now with sick features and a diverse mix of skaters. It’s a destination spot.”

Fast-forward eight years, and K-Dub is still transforming the place. This time though he has big players involved. After the initial construction, he built relationships with guys in the high ranks of the X Games. They donated obstacles, wood ramps and sheets of Skatelite, a premium, expensive surface material, for both Town Park and Tha Hood Games. But K-Dub always had it in the back of his mind that he wanted a true cement park – more permanent than wood, something that could stand up to the hundreds of skaters visiting every day. 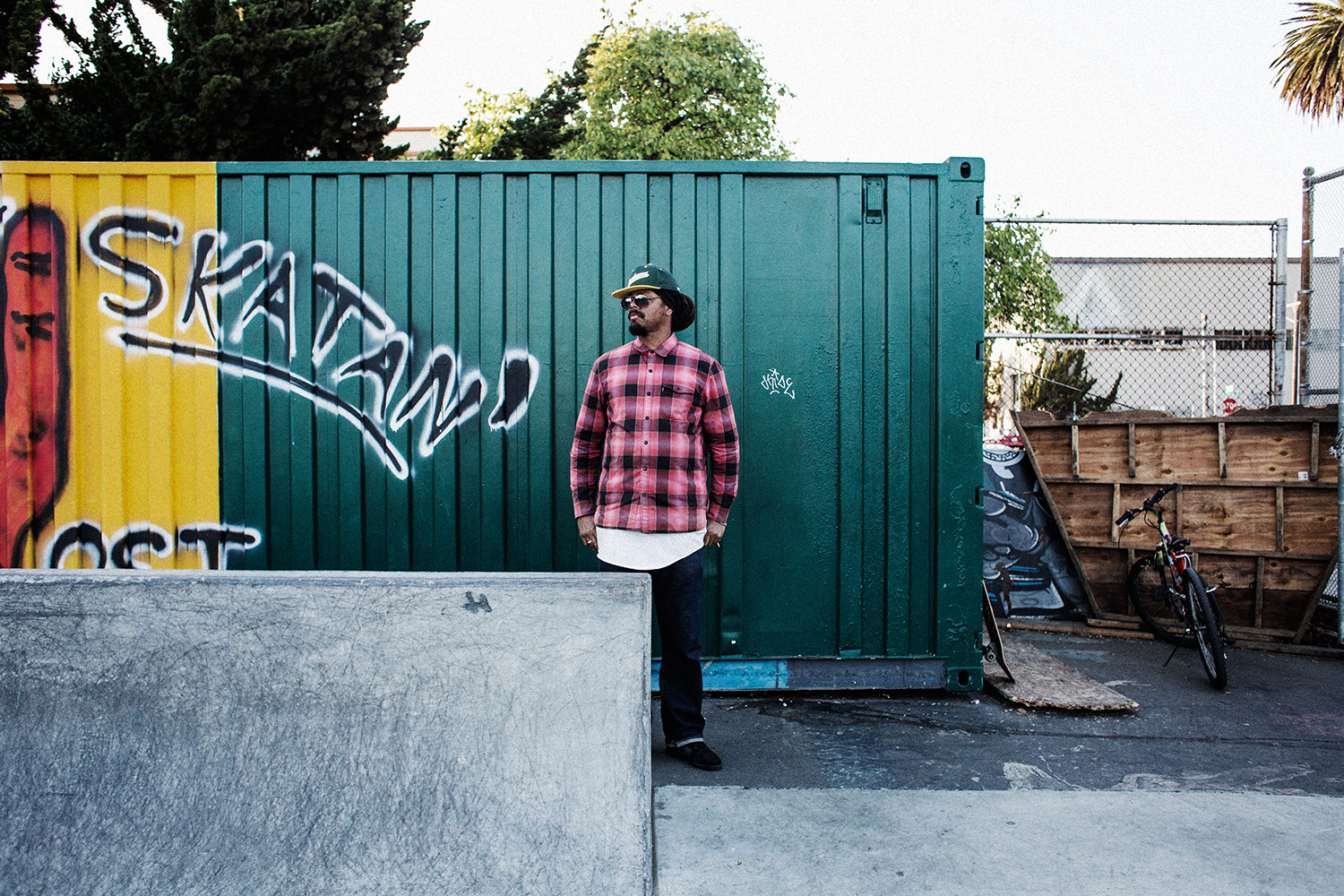 Enter Kent Uyehara, fourth generation San Franciscan and owner of FTC Skate Shop on Haight Street. “I told him we all have the same dreams – to build parks for kids, but there’s a lot of disappointment along the way,” says Kent. Fortuitously, he was able to connect K-dub with the skate-philanthropy behemoths at Levi’s. “I was amazed he was able to pull it off,” says Kent. “I feel good for K-Dub, each one of these steps have been fulfilled, and it’s great he is his own entity and has the respect from the city of Oakland.”

Levi’s became the fiscal sponsor of the phase two cement reconstruction, donating $300,000 to the project. “You can’t even buy a pair of Levi’s in Oakland, and here they were offering a free skatepark,” says K-Dub. “It’s good, we hit it while it’s still hot. The thing is, you get a mothership of a company like that, and they still want to complete what they started. That shows you that there’s heart there, and they can see what this park means to the community.” 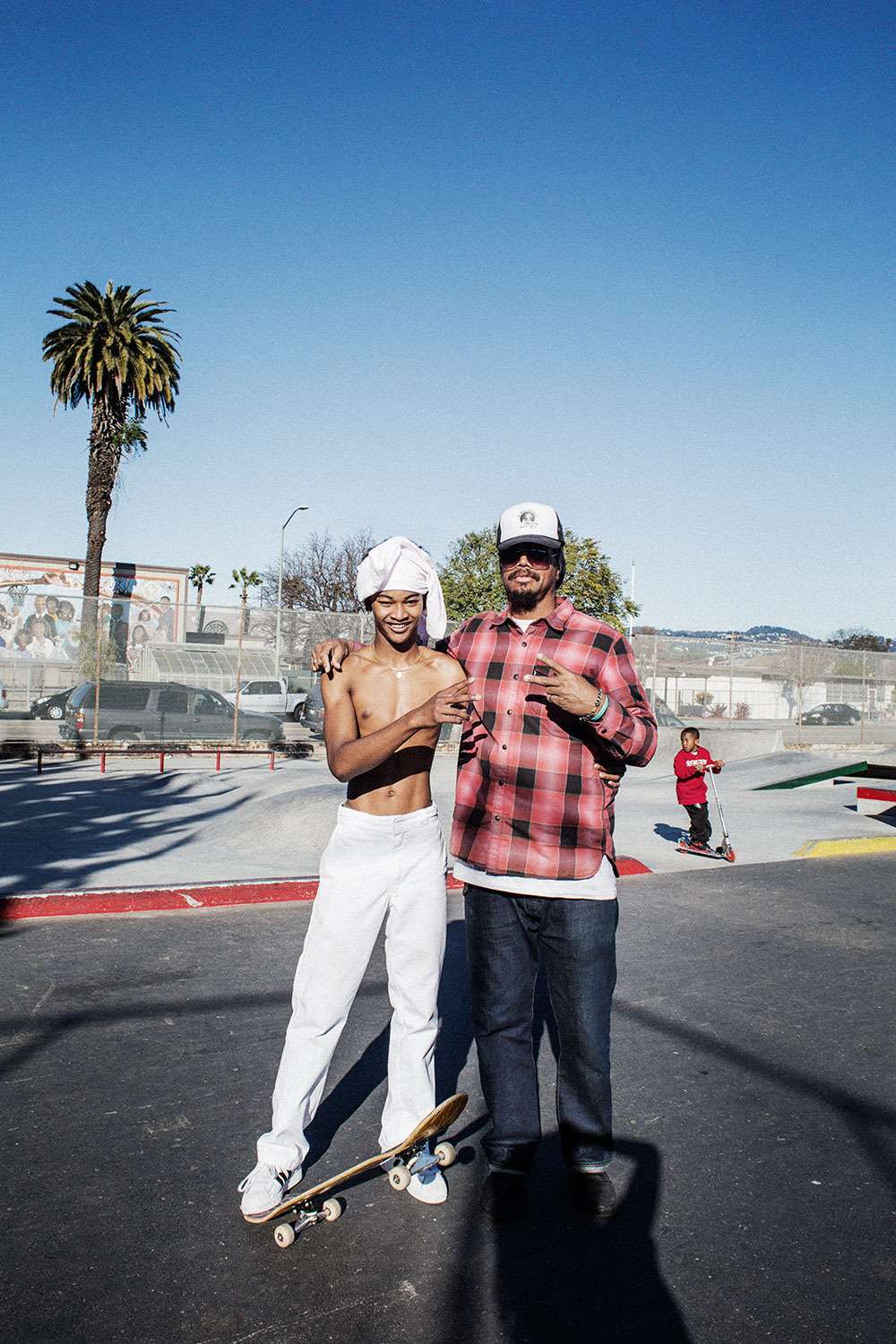 K-Dub has two minutes in front of eleven city council members at City Hall, to explain why the people of Oakland should accept in-kind services from Levi Strauss & Co. and reconstruct DeFremery. There are three ten-year-old boys standing behind him, hugging their skateboards close, grinning and giddy. The Council President invites them to stand behind K-Dub, she’s taking pictures with her iPhone.

After the meeting, twenty young men dressed in skinny jeans and over-sized T-shirts flood into the lobby alongside women in power suits and businessmen with briefcases. Most of them have their boards in tow, and they’re slapping hands, giving one-arm hugs, rejoicing in the next phase for their park. As they begin to walk down the marble steps to the lower floor, ten-year-old Malachi is grinding his board on the handrails in City Hall. K-Dub just laughs.

Linkedin
RELATED ARTICLES
OTHER ARTICLES
In the first story from Levi’s® Skateboarding Special II: Stories of Independence — our annual Skateboarding collab with Levi’s® — Cali transplant Marius Syvanen explores the importance of keeping his Finnish heritage alive no matter where he lives.
In the first video to celebrate our annual Skateboarding Special, in collaboration with Levi's Skateboarding, we follow Finnish skater Marius Syvanen around the personal spots that have made San Diego home.
Independent characters from skate culture – like K-Dub of Oakland's Town Park, Antisocial head honcho Michelle Pezel and Palestine skate charity SkatePAL – explore what it means to go it alone.
Beautiful new short documentary Skateboarding in Oakland shows how a skatepark can be a force for positive change.