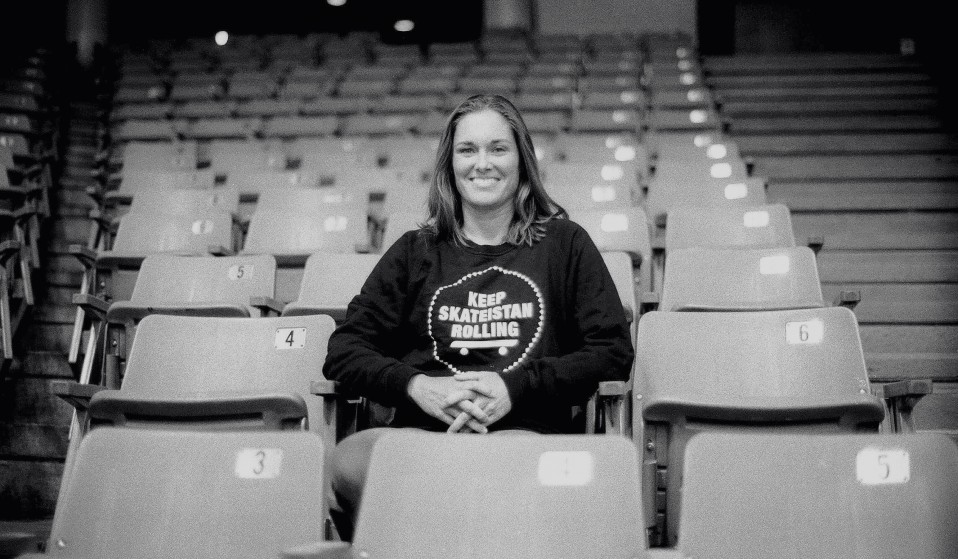 “Since I competed for so long myself and have been skating since I was really young; my motivation is to keep things legitimate for the skaters,” explains legendary advocate and promoter of women’s action sports, Mimi Knoop.

We are sitting together in the stands of the UIC Pavilion in Chicago, right before the final Street League stop of the year kicks off. For the first time ever, eight of the best female street skaters will also get to compete on this massive platform, in front of a packed-out crowd and live on the TV. I wanted to support what Mimi and the WSA (Women’s Skateboarding Alliance) are doing for women’s skateboarding by coming to the competition and helping spread their story. Women’s inclusion at Street League is only the first step towards a much wider vision and only a small part of the story, as I find out from Mimi…

Founder of The Alliance, the organisation that promotes and encourages female action sports participation; Mimi is one of the “stewards of the sport”, as she puts it. It’s the outcome of years of hard work finally paying off that has her sitting here talking to me in the arena. “I feel like I’ve had my head down working so much that I only just realised we are here: it’s awesome that this day has come,” Mimi says, proudly staring down at the course, one that will be skated by both men and women over the weekend. “It feels like it was just yesterday, but really it was a couple years ago that we proposed the idea to Rob Dyrdek and Brian Atlas, who run Street League. It’s awesome to see it come to fruition.”

As the biggest organised skateboard-only series, Street League aims to give skaters an organised competitive platform and the chance to win prize money comparable to athletes of mainstream sports. Although predominantly held in the U.S. and sometimes criticised for referring to itself as ‘Global’, Street League brings together the top competitive street skaters from around the world to compete over multiple stops, with hefty paycheques up for grabs.

Providing a bigger and more commercial platform for competitive skating, Mimi recognised that having women included would only grow their audience. So she teamed up with Kim Woozy (Mahfia TV), Lisa Whitaker (Girls Skate Network) and YuLin Olliver (Yunexis) to create the WSA, a global management and consulting agency dedicated to authentically representing the industry voice of women’s skateboarding. The four strongest advocates, it took them two years from pitching the idea, to receiving the green light, which Street League was enticed to do for a number of reasons. 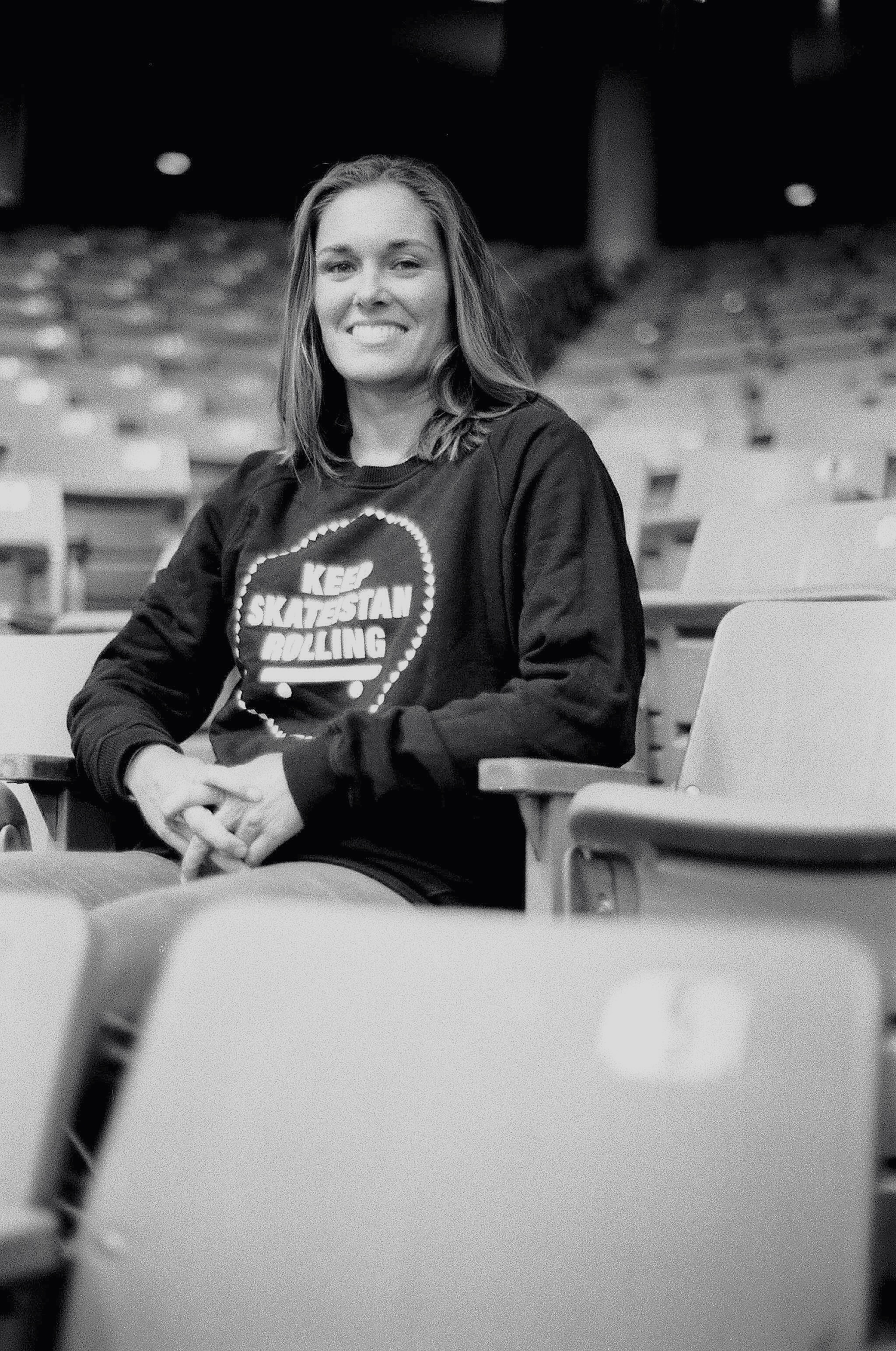 “I think it will give women opportunities as it will legitimise women’s professional skateboarding to have it on the biggest platform,” Mimi explains. “But I also think that it will help Street League as much as it will help women. It will open up a whole new market of fans and participants alike.” And the other reason? “There’s also the potential to have skateboarding in the Olympics in a few years…”

When Tokyo 2020 announced their recommendation to have skateboarding included in the Games last month, it swung open the door to a delicate debate. When it comes to skateboarding, which is often seen as more of a lifestyle than a sport, it’s a touchy subject. But the Olympics are recognising the power that activities such as skate have to tap into the influential youth demographic and enable them to remain current and widen their audience. It’s a strategy that proved its worth with BMX and snowboarding at previous Games.

There is a side of the debate that claims the Olympics would benefit more from having skateboarding than vice versa, and so organisations are fighting to make sure it is legitimately represented, should it make it on to the big stage. Street League is connected to one of those bids, offering a skate qualification series eligible for the Olympics. If they end up taking part, they would be required to include women. “The Olympics is not gender-biased so they have to have men and women in every sport featured,” Mimi reminds us.

Rumour has it that the FIRS (the Federation of Roller Sports), is to take control as it was their proposal that was pushed through by the committee. A decision that is haunting many skaters, who already have negative opinions on the inclusion of skateboarding as it is.

Despite the negatives and the positives and regardless of who is controlling it, if anyone is going to win from the inclusion of skateboarding at the Games it will be women. As the fastest growing demographic in action sports, women’s skateboarding could win gold in 2020, and Mimi is on board to make sure it’s being looked after… for now. “I think it will benefit women the most,” she exclaims, “With a contest structure and an ‘in point’ like the Olympics, women’s skateboarding is really going to come into its own in the next few years in terms of new growth. The trajectory is going to be really fast, it’s going to double up on itself with more opportunities on the plate. That’s my opinion anyway; I may not be right, but that’s the potential I see from where I’m standing.”

There is considerably less negativity from the female perspective when it comes to the Olympic debate. With a lot less to lose and a lot more to gain, it’s clear the potential to make a viable and profitable platform for women’s skateboarding is there. A platform that entices sponsors, brands, events and money to be pumped back into the women-specific side of things. Something that, not only does it deserve, but needs in order to progress to the next level. “I know more girls are going to start skateboarding from watching this,” Mimi states, while she stares out at the course as Samarria Brevard, Lacey Baker, Vanessa Torres and the rest of the women practice.

Currently it’s less than a handful of females who make a living off skateboarding, with the exception to the rule, Brazilian skater Leticia Bufoni. Being both skilled on a board and pretty on the eye means she is a safe bet for brands and sponsors to invest in initially. Whilst other female skaters are steered clear of, deemed too risky. Something like the Olympics could reprogram the selection process and injustices that exist in in the mind of the male-dominated skate industry.

Women’s skateboarding presented to the masses could entice sponsors and support, which in turns creates money in the scene and a profitable future for the world’s best. If these girls could skate for a living, travel the world to comps and be part of the biggest Games on earth, they would jump at it. “It’s just another thing that will add on to what we are already doing, so I’m for it, of course,” says Hoopla skater Samarria Brevard. “As long as it’s keeping that momentum going.”

Mimi Knoop’s time spent pushing for more competitive stops for women, and in particular to be part of Street League, is all in order to keep things legit. Mimi aims to “create a solid and authentic connection between the skaters, the people running the events and the huge corporations that don’t know anything about skateboarding.” This is what the Olympics could bring about.

Women’s skateboarding is in safe hands thanks to Mimi, but does she get worried at the thought that one day the control could be taken out her hands, especially as the scene grows? “Of course, that is always a possibility,” she explains. “But I tell everyone: ‘You don’t know what could happen next year or even next week.’ All we can do is continue looking out for the athletes and our clients by keeping things legitimate; by being the best stewards of the sport that we can be. It’s really about doing things right the first time around to set the bar for everyone else that follows.”

Find out more about The Alliance and Street League.

Linkedin
RELATED ARTICLES
OTHER ARTICLES
Photographer Melanie Nissen recalls capturing the characters, fashions and rarefied chaos of a rapidly-expanding set of punk bands who helped to redefine the genre.
Ahead of the policing bill reaching its final stages in the Lords, protestors came together to rally against the legislation.
Those set to be impacted by the governments ’undemocratic’ bill explain why it risks silencing them.
Photographer Yan Morvan revisits a radical moment in history, which saw the emergence of a fiercely-rebellious spirit among the UK‘s youth.
Leading art critic Robert Storr reflects on the photographers – from Seydou Keïta, to Malick Sidibé, to Carrie Mae Weems – who helped to transform and redefine the medium.
In Sheffield, food delivery drivers are fighting back against one of the giants of the gig economy.