To celebrate Nike SB's NESW project – a series of videos and a book about the UK skate scene – we catch up with Essex-born skateboarder Neil Smith.

To celebrate Nike SB's NESW project – a series of videos and a book about the UK skate scene – we catch up with Essex-born skateboarder Neil Smith.

Essex gets a bad rep. Thanks to national-joke shows like The Only Way Is Essex (kind of the Jersey Shore of the UK, for you Americans), people can be a bit harsh when it comes to the Old English county.

But Essex isn’t all WAGs and kebabs. It’s also produced a ton of talented people like Chelmsford (ish) local Neil Smith, who helped put British skateboarding on the map in 2005 as part of Blueprint’s iconic Lost and Found era, alongside the likes of Danny Brady, Nick Jensen and Chewy Cannon.

With a decade of trips, footage and sponsors under his belt, Smithy now rides for Nike SB and National Skateboard Co., among others, and continues to represent the best side of this country’s evolving skate culture.

Curious about how skateboarding took root in the unlikely East in the late ’90s we caught up with Smithy and took a trip down memory lane.

What was it like growing up skating in Essex?
In my town where I grew up, which is a small town called South Woodham Ferrers, in Chelmsford, I was quite lucky as there were hundreds of kids who skated. It was a massive scene. But then, after a few years, as everyone got older, the scene started to die out. I think now in the town there’s probably only about ten skateboarders, where there used to be hundreds.

How did you start?
I think I was about twelve or thirteen, ’98 or ’99. My older brother had friends that skated and they would come round and leave their skateboards on the side and I’d just take them and go skateboard on the driveway. Eventually I got my dad to buy me a rubbish board from an ‘all sports’ shop and it just went on from there.

What do you remember from those early days?
I remember wearing baggy trousers and big old shoes, haha. Everyone was like that back then – Shorty’s, Osiris and Reaction, stuff like that. It was cool at the time! A lot of stuff happened. We were kind of rebellish in a way I guess. We were the naughty guys of the town, we were always getting in a lot of trouble. The skate spot we used to skate was on a church, next to the school and we didn’t get a skatepark for a long, long time. So we just stayed in the town centre and all the general public would hate us and think we were the worst kind of people when really we were just a load of kids trying to skate. I remember one time they called everyone into the police station and questioned us one by one, because we were just terrorising the town basically, haha. But we were just messing about.

What was your favourite spot growing up?
My favourite spot actually was Southbank. We used to take trips to London, from thirteen to sixteen, and a big crew would go, try and bunk the train, get a pound off your mum for a cheeseburger from McDonalds and skate Southbank. I used to love jumping down stairs and they’ve got a stair set there. I used to love Southbank the most, back then. We never really spoke to the locals, we kind of just went up there and did our thing.

What was your first skateboard?
My first skateboard was a World Industries skateboard, a Daewon Song pro model. That was my first proper one – it was my birthday and we had to go to shop in Southend and it was closing but we rang and got them to stay open so I could get this board.

First Nike SB shoes? Favourites?
My first ones were a pair of grey Nike SB Angus shoes. Yeah, a funny shoe! I’d just started with Nike, in 2003/2004 – as they launched – and was really excited to ride for them. My favourite Nike SB shoe is probably the Dunk – any decent colourway of the Dunk.

Skate video that changed your life?
A few probably. The Blueprint Waiting For The World video stood out a lot for me. That was one of the first British skate videos that really had an impact – that let the world know that England has great skateboarding – and that opened the eyes of a lot of people I think. Blueprint was at the time, one of the best companies, and I managed to get on and ride for that company after that video came out so I was really happy about that. 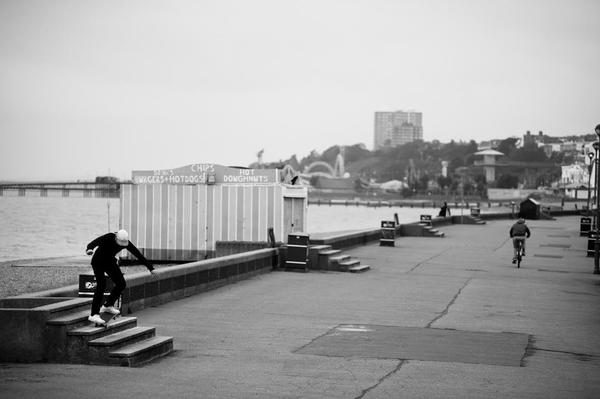 You live in London now – is it a good time to be a skateboarder here?
Yeah, I’d say it’s a good time to be a skateboarder anywhere in the world now. Skateboarding’s so big at the moment it doesn’t really matter where you are – there are facilities all over the show and if there aren’t facilities you can just go out on the streets. London’s got a big scene, there are thousands of kids skating out there everyday, and we’ve got loads of good skateparks, so it’s a good time for it. Apart from it’s winter now, that’s not good. But you’ve got a few cool brands coming out of London now so people are looking at what they’re doing and they’re into it.

What’s the most likely thing to hear on a skate trip at the moment?
‘This go!’ That gets used a lot. When someone’s trying a trick and they’re always like, ‘Alright, this go!’ and it’s never that go. They try another hour’s worth of skateboarding and they’re still like, ‘This go! This go!’ It just never happens. I think every skateboarder has probably said that a thousand times in their life.

See more from the Nike SB NESW project at their YouTube channel and watch out for the exclusive book, which drops Friday December 12.

Linkedin
RELATED ARTICLES
OTHER ARTICLES
Skate pro Paul Regan talks about his do-it-yourself build in Hull, Yorkshire.
In a world of caricatures and facsimiles, pro skater Geoff Rowley is standing up for gritty authenticity.