To celebrate Nike SB's NESW project – a series of videos and a book about the UK skate scene – we catch up with London lifer Casper Brooker.

To celebrate Nike SB's NESW project – a series of videos and a book about the UK skate scene – we catch up with London lifer Casper Brooker.

If there’s one skate story that’s kind of grabbed the world’s attention this past year it’s got to be the battle for Southbank. When the historic spot was threatened with development in 2013, thousands in the skate community (around the world) rallied around to protect it. Unbelievably this year, despite big money and big business, they won.

For Casper Brooker, a London-based skateboarder who grew up on the outskirts of the city, the spot is kind of a second home. As soon as he was old enough to catch the train up from Purley, near Croydon, he became a regular fixture in the fabric of the iconic undercroft.

So what’s it like to grow up in the shadow of a skate mecca? And where does your inspiration come from when you’re born in ’94 (the year Kurt Cobain shoots himself, Supreme and Chocolate are born, and, most importantly, Friends hits TV screens)?

We caught up with Casper to find out more.

What was it like growing up skating outside of London?
I grew up in Purley, which is pretty much Croydon, and there wasn’t really anyone around who was into skateboarding at the time. There was a skatepark in Caterham, which isn’t too far away, but there was a metal miniramp in a house just down the hill from me so I’d see kids skating that and I eventually asked for a board for Christmas when I was about ten. I had a good road outside my house so I just started skating there.

What was the community like?
I was only allowed to go to that miniramp early on a Saturday morning with my mum so there’d never really be anybody there. She used to let me go to that skatepark in Caterham but all the other skaters were older and wouldn’t really wanna hang out with a twelve-year-old, haha. But after a year or so went by, I started to get know people. I remember learning how to drop in at the vert ramp at Caterham, when I was about twelve, and the first time I did it I was so excited and I couldn’t sleep that night I don’t think.

What was your first skateboard?
I had like a Pokémon board from Argos for ages, which just had a massive picture of Pikachu on it. Haha. But my first proper skateboard was a Blind one from this shop called Natterjacks in Croydon. And it had like the Blind reaper guy reenacting The Shining, with like an axe going through the door.

When did you start skating London?
When I was thirteen and I was allowed to go up to London with some of the older guys from the Caterham park, for an Emerica Wild In The Streets thing. It was the first time I went to Southbank. I didn’t know there were that many skaters in London. There were so many people! It was crazy to see. The first sort of hour I was kind of scared but then I just skated and it was fine, I had a really good time. I met loads of people on that day and just felt like, yeah this is rad, I’d love to be able to do this forever.

So that’s your favourite spot?
Yeah, since that first time I skated it I was blown away by it. It’s still one of my favourite places to go and it recently got saved so now I can go there for a long time to come. Technically, it’s not the best skate place in the world but there’s a real community vibe, everyone’s friends. It’s interesting to skate because you have to go there a lot to figure out how to make the most of it. I’ve seen loads of kids who’d only skate the stairs at first but now they’re working out new things and getting really good. It’s cool to watch. When there was the risk of it going, everyone did not want it to go! And skateboarders managed to save it, which is amazing.

First Nike SB shoes? Favourites?
My first ones would be the Blazers and my favourites would have to be the Lunar Gato – they look really good and they’re really comfy, not too thin. I’m stoked on them!

Any skate videos that changed your life?
The first two videos I saw were Blueprint Lost and Found and Baker 3. I liked Baker 3 more then because I was well into Andrew Reynolds, people jumping down stairs, and tight jeans, haha. Baker 3 was definitely the biggest video for me. I liked punk music and rock at the time and they all seemed a bit mental so I was well into it. When I first watched Lost and Found I didn’t appreciate it as much as I appreciate it now. When I was younger it was all about, ‘Oh my god he can frontside flip seventeen stairs he must be the best.’ Whereas now, your style on your skateboard and how you do certain tricks is more important. I mean, to a certain extent, there are some people who get away with murder. I don’t know, I like all sorts of skating now.

How do you think London stands up to other big skate cities?
I think people just think it’s rough here, haha, and that there are weird spots. You go to some places and what would be a spot here in England, they don’t really skate. And that’s not necessarily a bad thing, but I think skating in London is quite different to a lot of the world. You can sort of tell a skateboarder from the way they skate – how they put together lines and what they classify as spots. It’s good. I like it. 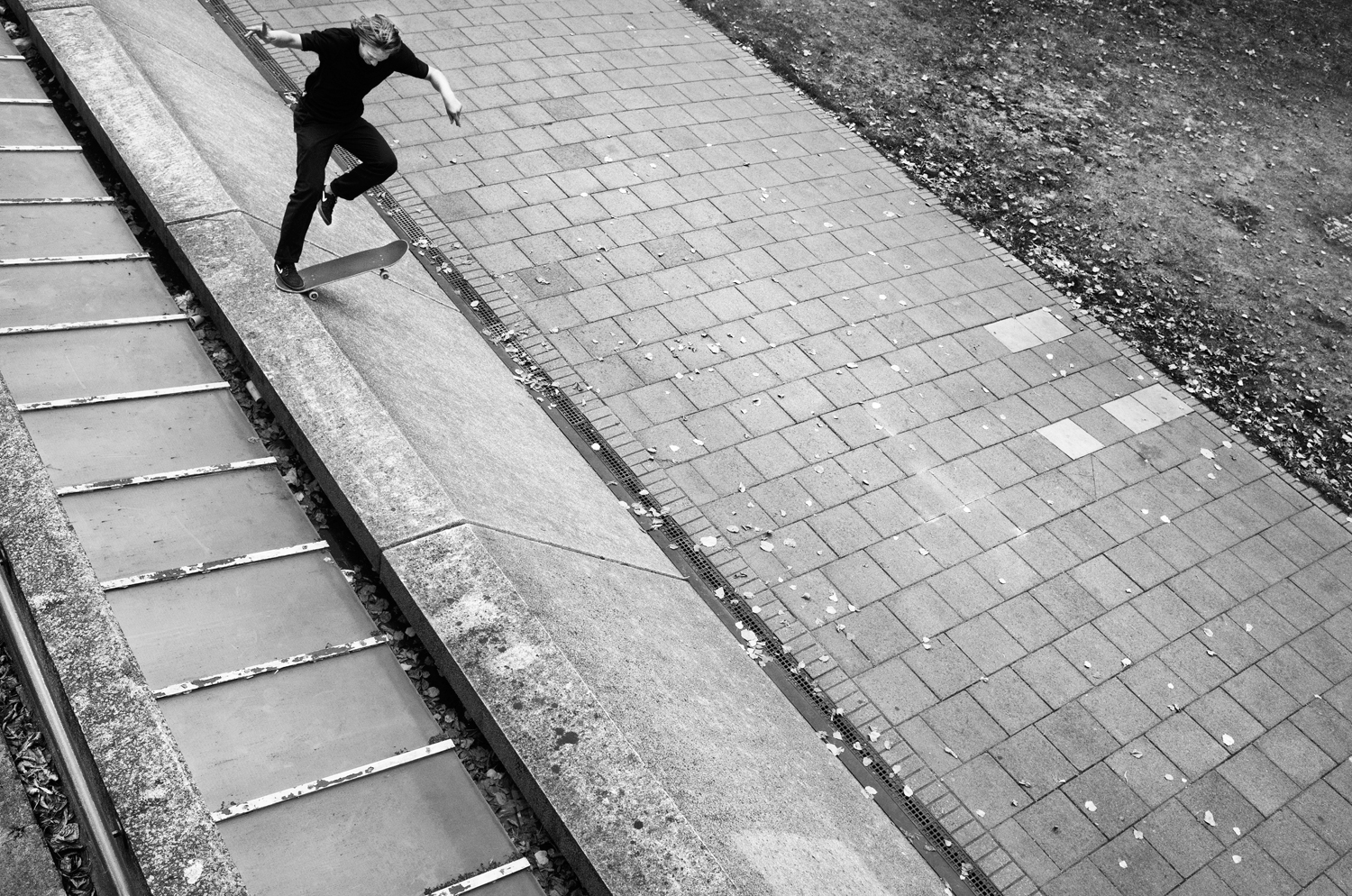 Any London characters that stand out for you?
My friends Sam, Big man and Chris, Paddy and Darius. Those are the people I like to skate with the most. I feel like some people can stop skating as much for fun, to just make sure they’re filming a lot, so I try to make a conscious effort to keep it even. I’ve known all of those guys quite a long time, from meeting at Southbank. We’re all from different parts of England but we all met in London.

What are your favourite shops?
Slam and Lost Art in Liverpool is really sick too. I’ve gone to Slam since I was young, I work in there, all my friends work in there, it’s my favourite. And then Lost Art, it’s just got a really good shop vibe, a good team, Mackey’s cool, and they do good clothes too.

What’s the most likely thing to hear on a skate trip at the moment?
If it’s a Nike trip it’d be Smithy saying, ‘Classic.’ And when we were in Detroit Chris Jones just kept singing that song ‘Cold in the D‘, which got a bit relentless, haha.

What’s the best thing about being a British skateboarder?
I think London skateboarding is pretty different – we have all these unique spots and it kind of puts us aside from all the perfect spots in Barcelona or the perfect spots in LA. I mean I’m sure if you’re a skater in MACBA you’d probably be proud to be a part of that too, but the scene is really tight here, everyone knows each other and everyone gets along.

See more from the Nike SB NESW project at their YouTube channel and watch out for the exclusive book, which drops Friday December 12.