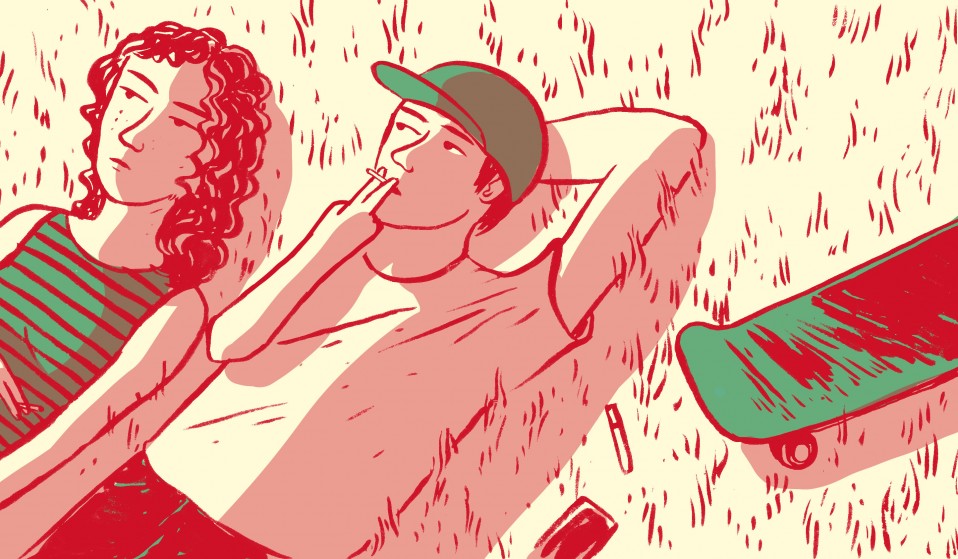 Last December, Hasan left Palestine to live illegally in Israel – here, he shares his stories on skateboarding, filmmaking, and falling in love with the enemy.

Last December, Hasan left his hometown of Qalqilya – a small city in Palestine’s West Bank – to enter Israel on a one-day visitor’s permit. He hasn’t returned since. Now living illegally next to one of the most troubled borders in the world, he shares his stories on skateboarding, filmmaking, and falling in love with the enemy.

Hasan plops his board down on the grass in the corner of Haifa’s beachside skatepark. He pulls out his pouch of tobacco and begins to roll, calling out to a group of teenagers a few metres away to ask to ask for a lighter. Soon, one is tossed over, and he lights up his cigarette, exhaling and wiping sweat from his forehead.

“I’m just off today,” he says, fuming over his loss at a game of SKATE a few moments ago. He blames his less-than-superb performance on his long day of landscaping work. He insists I have a go on his skateboard while he casually chats with the kids nearby in a mixture of Hebrew and English. I hear them call him “Max.” The conversation raises his spirits, and soon he is tossing over his pouch of tobacco to return the favour to the guy who offered him a light.

The last time I saw Hasan he was in his hometown of Qalqilya – a small, densely packed, conservative city in the northern West Bank which is almost completely encircled by Israel’s separation wall. After facing a backlash from family members and peers for his lifestyle, he ended up following in the footsteps of friends from Qalqilya’s tight-knit, countercultural group of skaters, free-runners, breakdancers, and emcees. Like them, he got out of the occupied city the only way he knew how — by crossing into Israel to live and work illegally. In December last year, Hasan passed through a checkpoint carrying a one-day visitor’s permit. He hasn’t returned since. 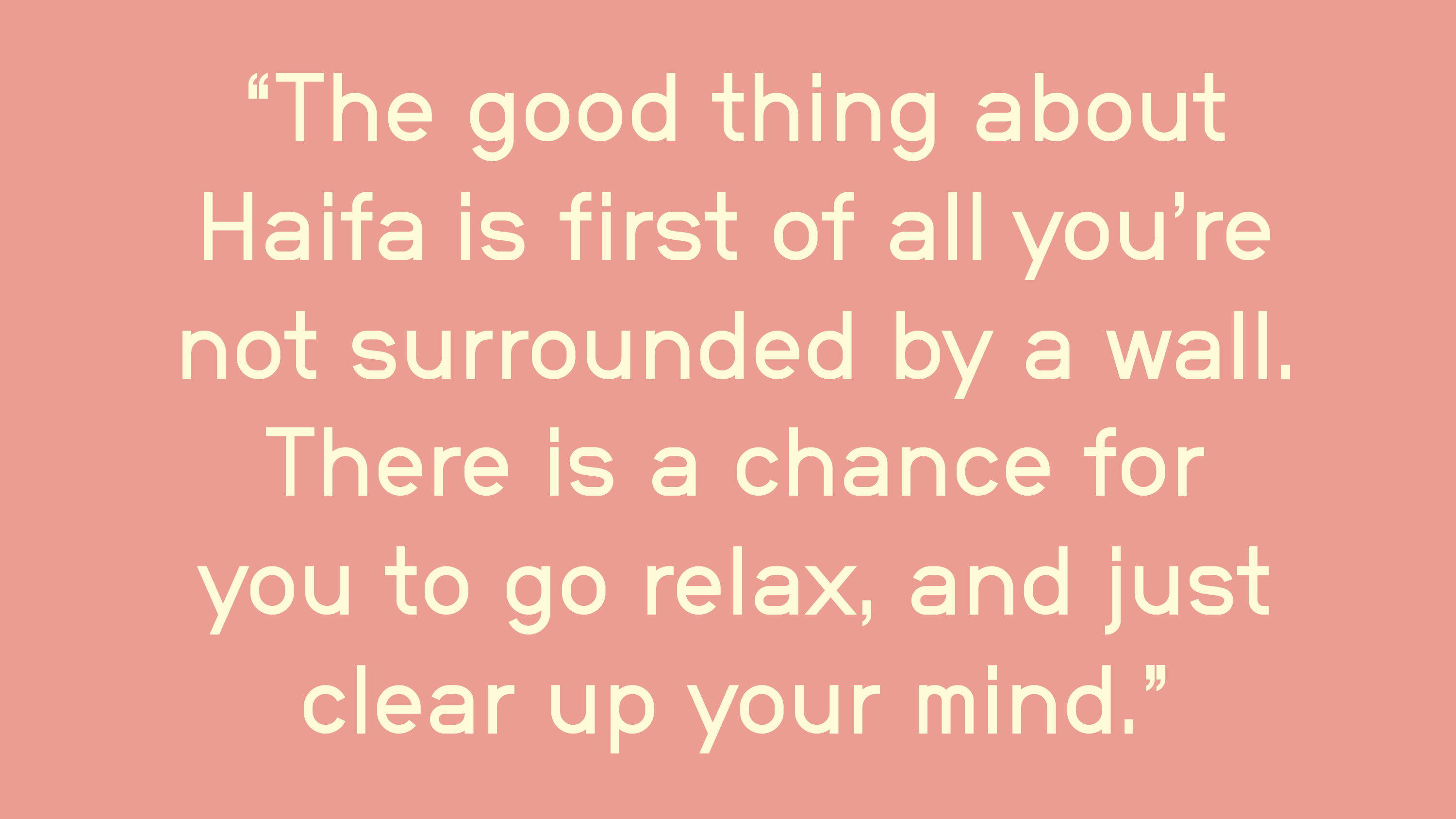 In a way, Hasan’s decision was not entirely out of the ordinary, with tens of thousands of Palestinians from the West Bank working without permits in Israel at any given time. Many of them grind away long, miserable hours of manual labour, interacting almost exclusively with other Palestinians. But Hasan’s life in Israel has been far outside the norm. Flaunting his impeccable English and unconventional appearance, he introduces himself to everyone he meets as Max from Los Angeles. He regularly hangs out with a mixture of Israeli, Palestinian, and international friends, frequents raves and hip hop shows, and is even hooking up with an Israeli soldier. It’s no surprise that he’s also rapidly learning Hebrew.

“The good thing about Haifa is first of all you’re not surrounded by a wall,” Hasan says. “There is a chance for you to go relax, and just clear up your mind.”

But Hasan has also faced countless difficulties in his new life in Israel. Working underhand without job security – in restaurants and bars, and as a landscaper – he hasn’t kept a single gig for more than a month, and is often let go at a moment’s notice. The day after I arrived in Haifa, Hasan’s boss doesn’t show up in the morning to drive him to work as he usually does. Hasan is expecting to use some of his day’s pay to reimburse a friend for a few grammes of weed, but the whole day, his boss won’t pick up his phone. He doesn’t show up the next day either, and keeps ignoring Hasan’s calls. Back to square one. He will remain jobless for several weeks.

Aside from the seeming impossibility of finding consistent work, Hasan admits that is growing tired of all the ducking and diving. “I’ve had to lie to people in the face. And that’s something that I’m not very comfortable with,” he says. “Although it may seem as an illusion that everything is good, reality still stays the same. I’m still Palestinian in an Israeli country.” 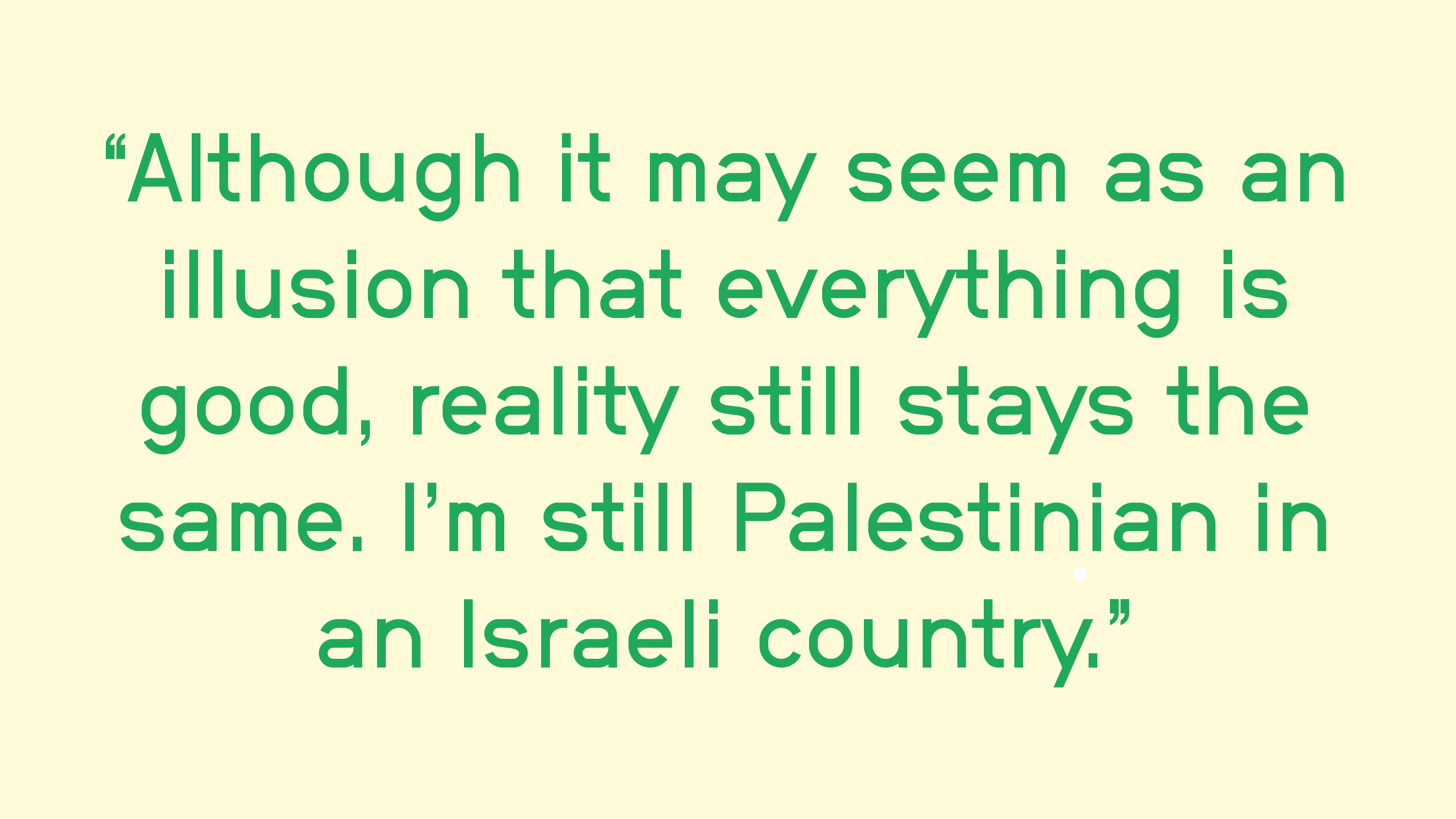 Haifa is often lauded for being a place of calm coexistence between Israelis and Palestinians. This air of tolerance is especially obvious where Hasan is crashing this month, on the hippy-dippy Masada Street. Here, Arabs and Jews sit in the same cafés, drink in the same bars, and get their dreadlocks done by the same hairdressers. However, despite the outward display of harmony, there are still familiar power dynamics. Conversations between Palestinians and Israelis are almost exclusively in Hebrew, and every evening a number of Israeli soldiers – nose rings removed for service – can be seen walking back to Masada Street from a long day of administering occupation in the West Bank.

Though he’s drawn to this commune-like existence, Hasan knows he can’t go around announcing his identity as a West Bank Palestinian working without papers. “You never know who could be listening,” he says.

He has, however, revealed bits of his true identity to a few trusted individuals – including the Israeli soldier he’s been dating. Hasan met Sophia while working as a dish boy in a restaurant where she waited tables. At the time he had no idea she was in the army. “The first time we hung out I took her to the beach,” he says. “It flowed normally even though she was wearing the fucking army uniform. Our first four dates together she was in the uniform. And it was really funny, because… every time I’d see the uniform I’d decide I should dump her that week or something. And the next day I’m like hugging her and kissing her in her uniform. You know how weird that is?”

Weird is an understatement. The last interaction I witnessed between Hasan and an Israeli soldier was in 2013, when I went to Qalqilya to interview the young group of skaters there. As we ate lunch by the wall and I recorded our conversation on my cell phone, a gate opened and a military jeep rolled in. Soon, soldiers armed with automatic rifles were walking up to us and shouting in Hebrew. “You can’t eat by the wall,” one of them told me – a hefty demand given that the entire town is surrounded by it. Hasan immediately responded in English, trying to defuse the situation.

Four years later, Hasan is friends with plenty of Israelis who have completed the mandatory military service and is even romantically involved with a current enlistee. According to him, he’s able to connect with Sophia because she also grew up in a very strict, conservative environment. This led to her running away from home during her teenage years. Now, the money she gets from the military has been a lifeline for her, and she doesn’t do it out of any reverence for her country. “She hates Israel and Arabs, just like me,” Hasan jokes. 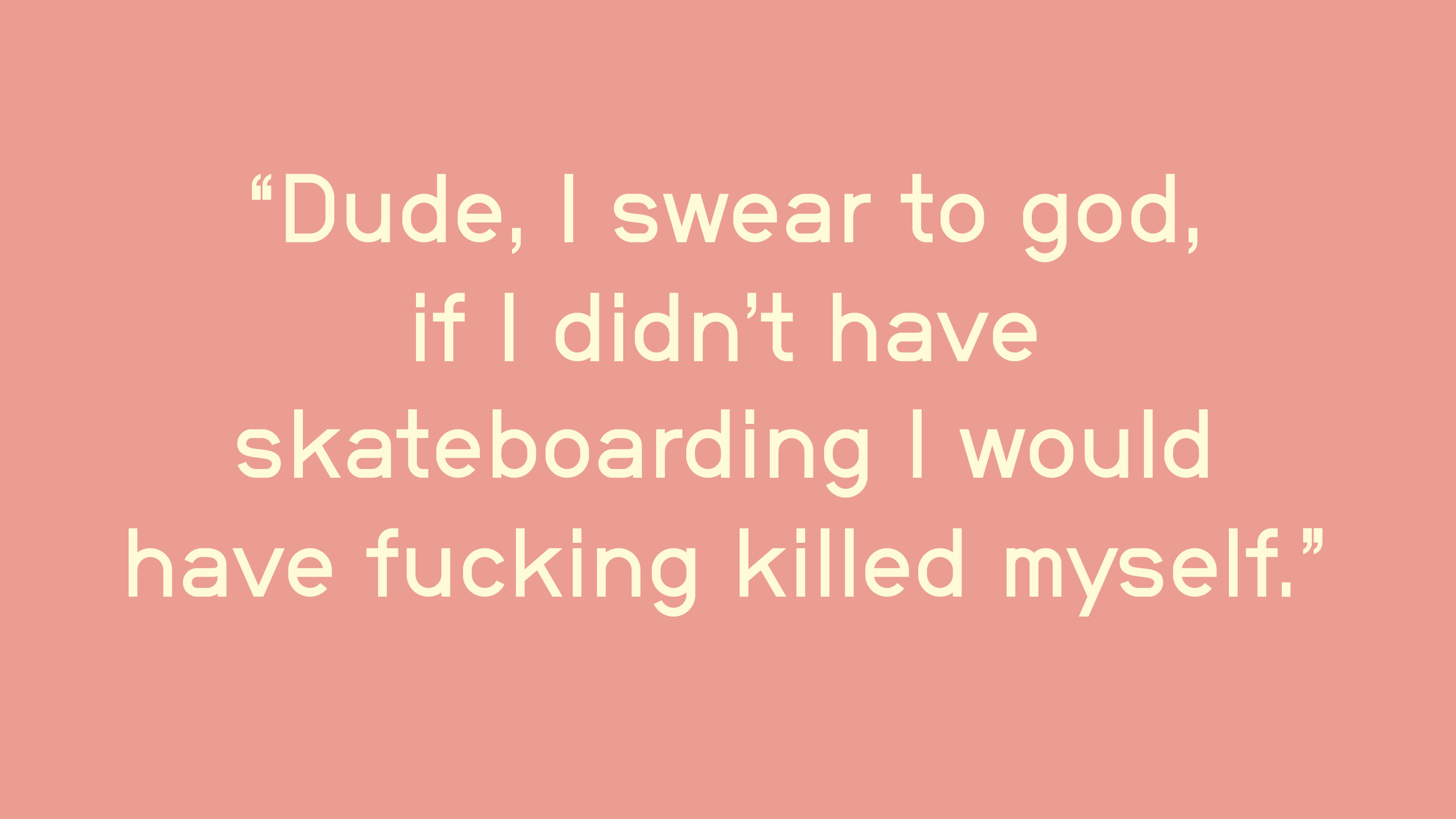 For Hasan, the word “resentment” might be slightly more accurate than “hate” – at least when it comes to Arabs. As is the case for other members of his crew, it was Hasan’s frustration over Qalqilya’s restrictive social environment that drove him to leave the city. He refuses to blame the occupation for the Qalqilya’s conservatism.“Don’t blame the situation for who you are. You are who you make yourself to be,” he says. “We have to help ourselves.”

Being caged in by the wall, hit hard by Israeli military activity, and pressured to live a prescribed lifestyle, many of Qalqilya’s youth end up directing their frustration back at the occupation by throwing rocks at watchtowers and getting into clashes with Israeli forces, often leading to arrests. Hasan’s best friend has three brothers who are imprisoned in Israel, and he is expected to work to help support their wives and children.

Instead of lashing out at the Israeli army, as younger teens Hasan and a few of his peers took a different approach. They channelled their anger into skating, parkour, breakdancing, and hip hop – describing their hobbies as a different kind of resistance against occupation. “Dude, I swear to god, if I didn’t have skateboarding I would have fucking killed myself,” Hasan says.

As the group grew, an American filmmaker and a Palestinian producer from Qalqilya started building a mini ramp in the town so the small community of skaters could grow. After the ramp was finished, Hasan met dozens of foreigners who came to volunteer, and his English improved dramatically. Various international organisations donated skateboards, and even sent professional skaters to help teach kids to skate. Hasan was able to exchange his toy board for a proper setup, and soon he was dropping in on the ramp, ollieing stairs, throwing tre flips, and grinding rails. 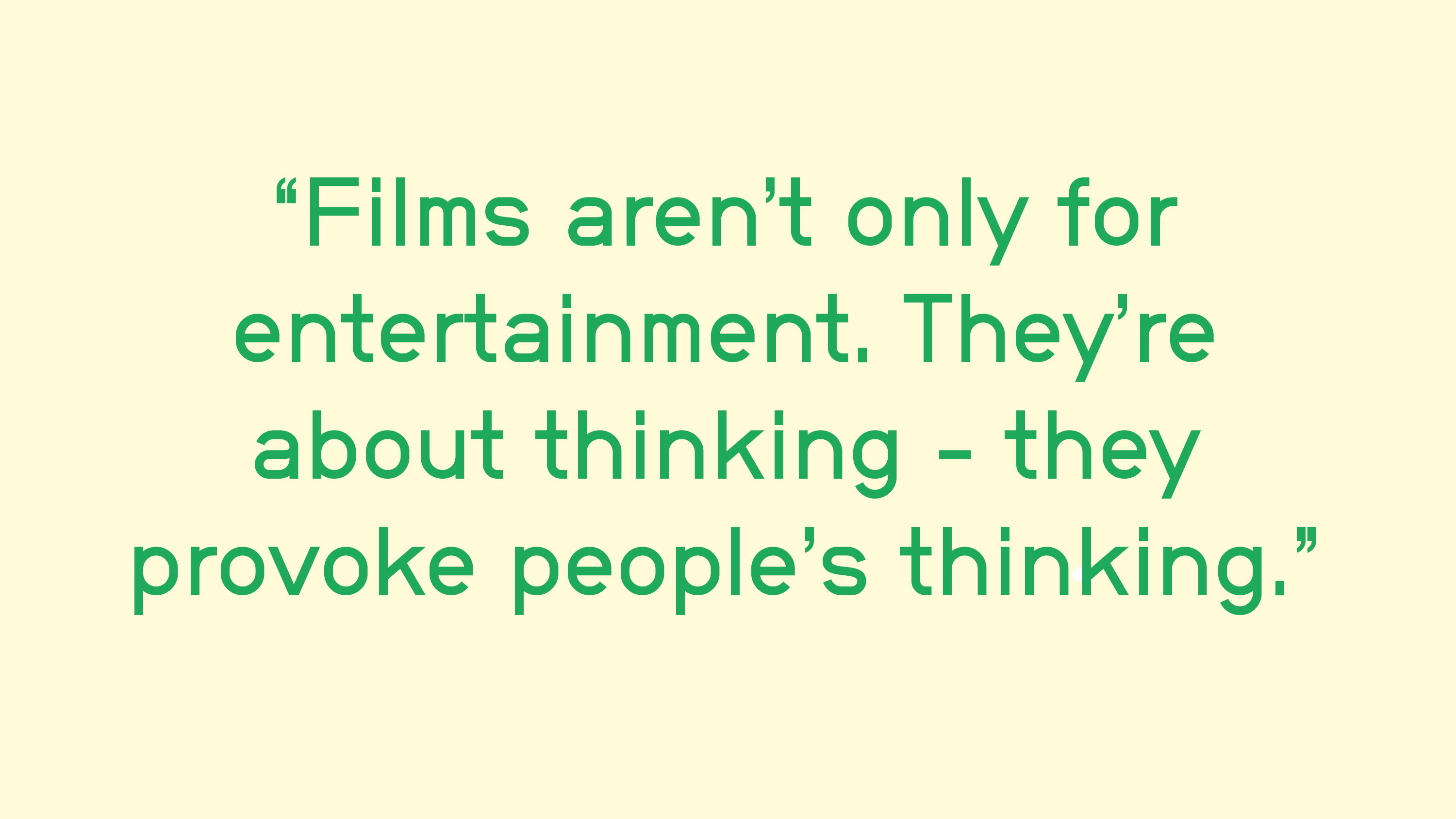 However, the backlash against the young skaters from some Qalqilya residents — who see skating as a waste of time, or worse, morally destructive — has been felt deeply by Hasan and his friends. As a result, he and a few of the other pioneers of Qalqilya’s skate scene have packed up and left – though that doesn’t mean they haven’t made a huge impact on their community. An organisation called Skateqilya is getting ready to run its second annual skate camp in the city, and Hasan is planning on making his first trip back home to volunteer at the camp for the second year in a row.

Upon returning to Qalqilya, Hasan will not only be teaching young Palestinians how to skate — he will also be filming. During my visit to Haifa, one of the reasons Hasan is completely broke is because he just spent all his money on an old laptop and a used GoPro. He has recently started experimenting with recording and editing short skate videos.

Hasan dreams of getting a scholarship to study film in the US. He has already been accepted into two universities, but with only a limited financial aid offering, he does not have the money to pay tuition.

He knows it would be impossible to save up his current meagre and unstable income to cover the gargantuan costs of a US education, so his focus right now is on making a short documentary to show to schools, with hopes of getting a scholarship.  “I know that I can’t live a sustainable life here [in Haifa], because I’m not even legal,” he says.

For Hasan, filmmaking is a rebellion against what he perceives as a disdain for critical thinking in Palestine-Israel. “Why can’t people have free thoughts?” he asks. “Films aren’t only for entertainment. They’re about thinking – they provoke people’s thinking.”

Names and some identifying details have been changed to protect the safety and privacy of individuals.

Linkedin
RELATED ARTICLES
OTHER ARTICLES
Photographer Becky Tyrell went down to the fading banger and stock raceway to meet a community desperate to keep it alive.
Filmmaker Laura Poitras discusses her new documentary which traces the remarkable life of the artist-activist and the impact of her battle against the US opioid crisis.
After fleeing the war in Ukraine, people are finding it impossible to secure affordable and decent housing in the UK.
After building his reputation covering the US civil rights movement in the 1960s, the photographer went on to produce some of the most enduring images of the past century.
A new film from Berghaus traces the story of Adam Raja, who left behind a turbulent upbringing to discover the healing power of climbing.
AI companies that develop image-generators using copyrighted artwork from the internet are coming under fire from artists who say that it amounts to theft.