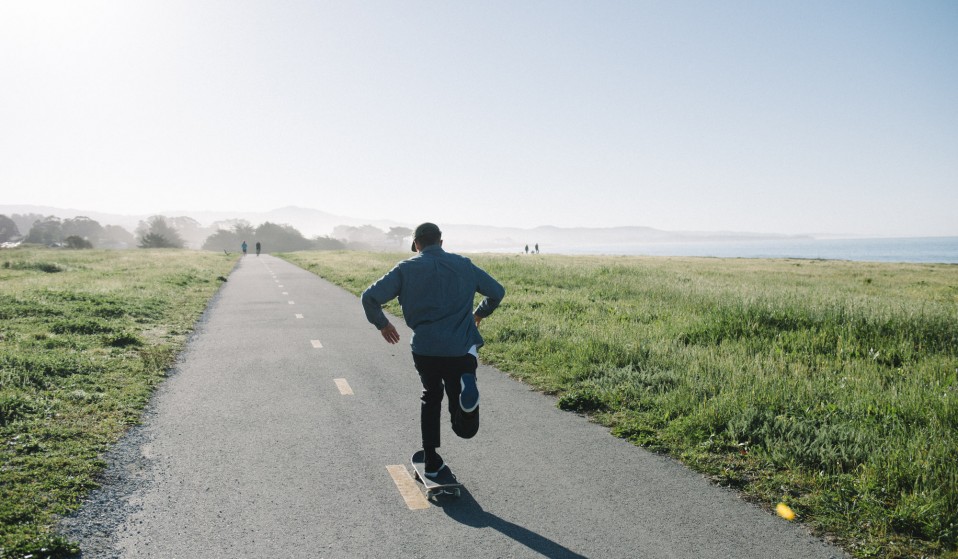 Oregon-born Pat Moran follows his skateboard around the West Coast on a one-man mission of discovery.

Oregon-born Pat Moran follows his skateboard around the West Coast on a one-man mission of discovery. 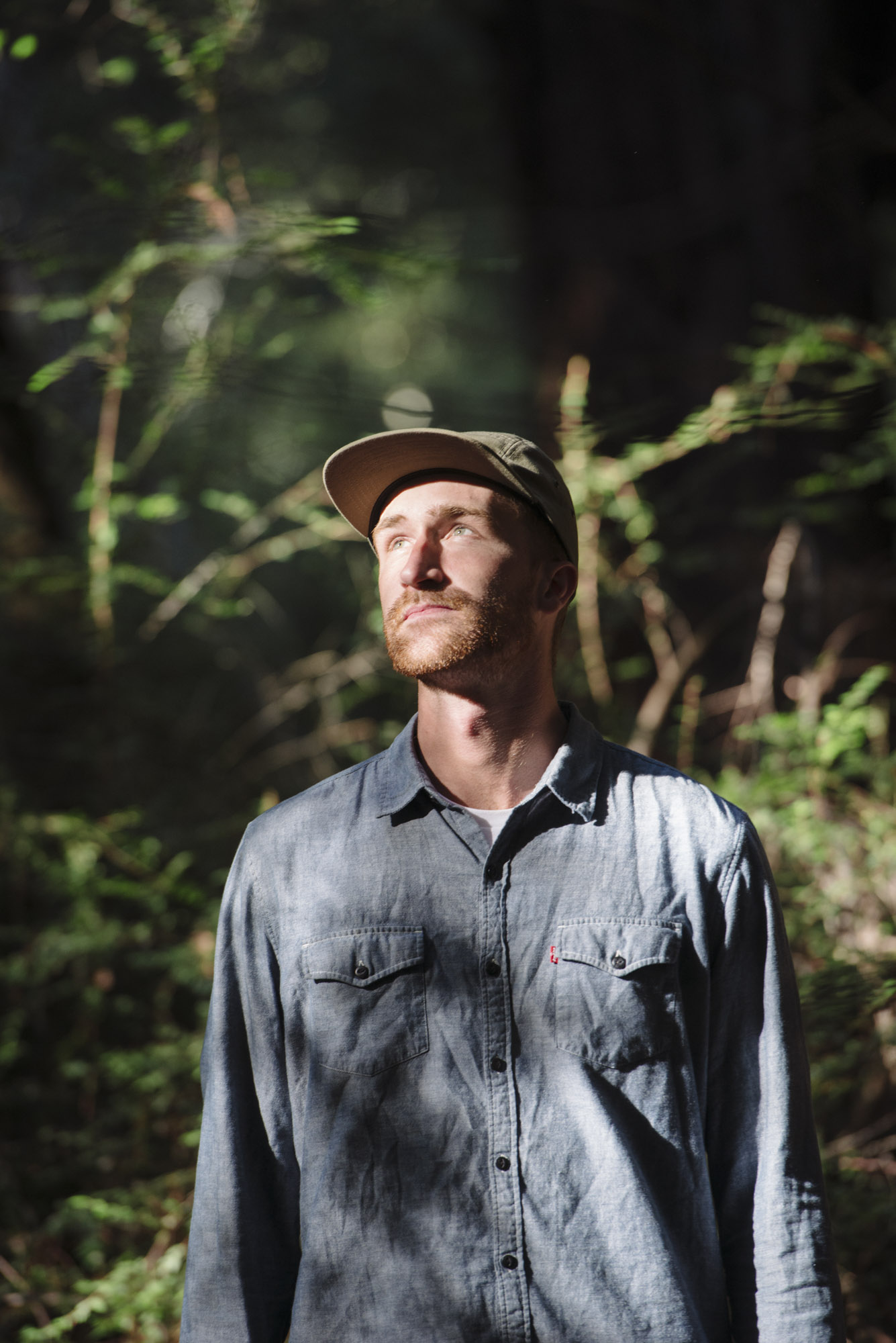 So, yeah, Pat’s not just early, he’s an actual early riser. Whether that’s due to the fact that he’s been couch surfing for the last year (an implicit part of that deal: Don’t be here when I wake up) or because he’s worked intermittently on farms his whole life, is still up for debate.

As our van heads out of the city and towards the coast and its peerless morning sunlight, that debate is beginning to seem pretty moot. Here we have a full tank of recently cheap gas and no agenda other than checking out a little DIY skatespot Pat had heard is hidden on a sweep of ocean bluffs somewhere south of town. 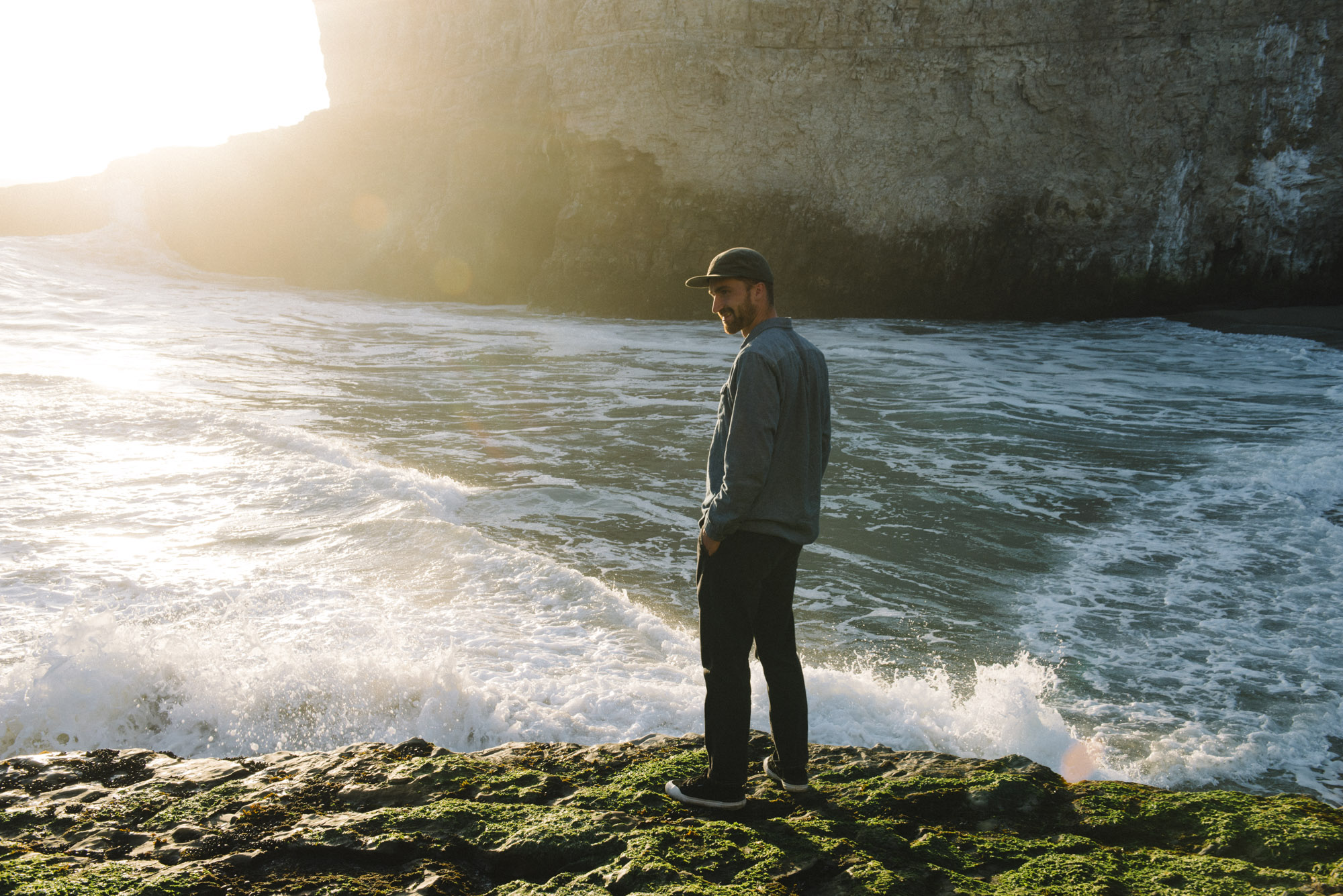 He seems eager to hit the ground running. “This a great city. But, like anywhere I guess, the appearance of diversity can hide a kind of cliquishness,” he calls out towards the back seat where I’m bouncing around in what looks like a yard sale. “Every time you meet someone it’s like, ‘Who are you? Are you an artist? Who do you skate for?’ There’s a shortage of ordinary people,” he says. While a lot of people thrive on that kind of energy, it’s clear Pat’s groove lies on an alternative wavelength.

That wavelength is the kind peripatetic wandering that suits a twenty-four-year-old: San Francisco, Joshua Tree, L.A., Arizona, Wyoming, Minnesota, Berlin – all spokes on a big wheel that stretches back to his hometown of Eugene, Oregon. 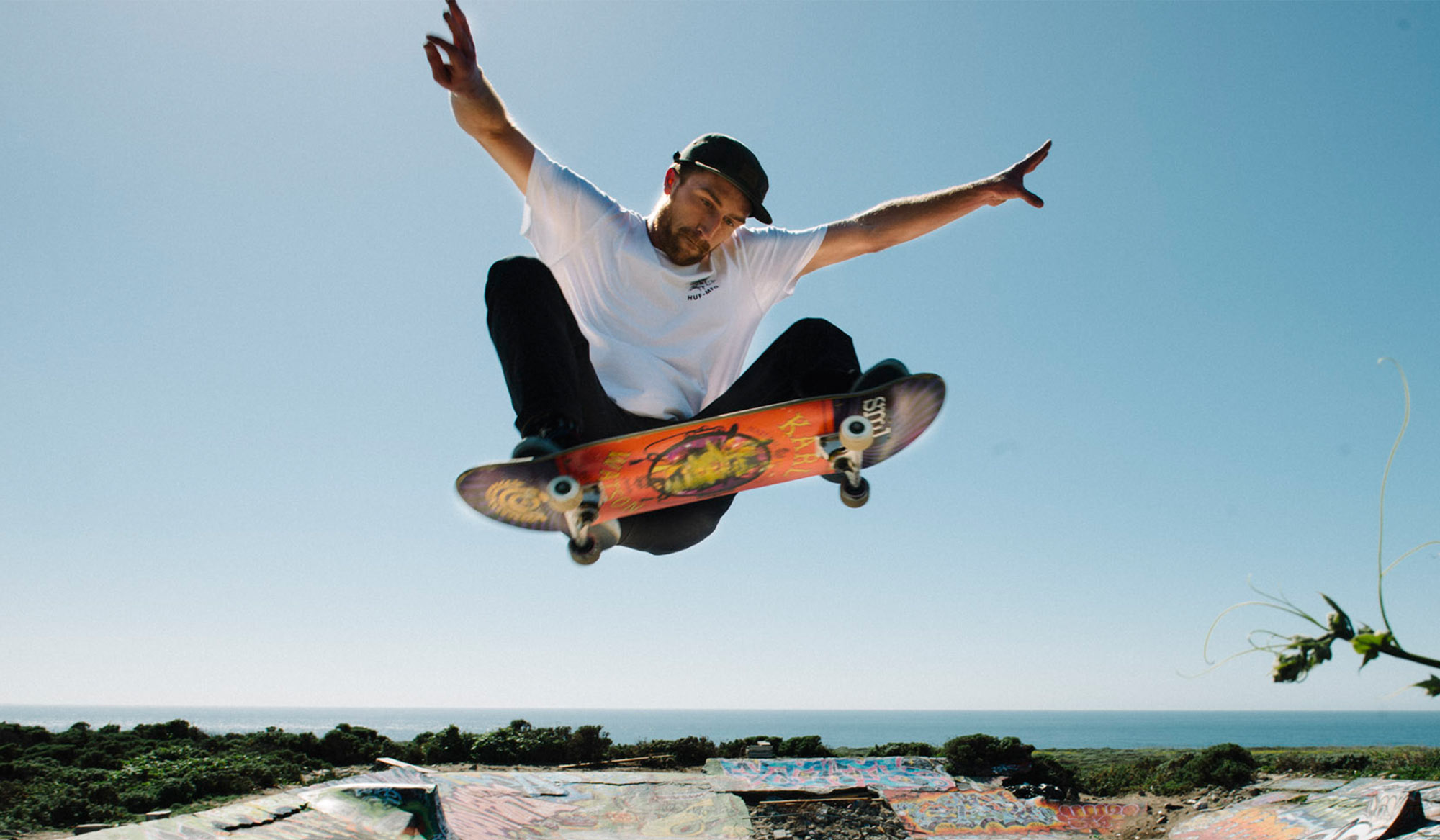 As we pull up to a beach parking lot, he reminisces about his childhood in Oregon and how he and his mom, a mechanic in the Navy, would travel to the coast and look for washed-up sharks on the jetty so they could pull out their teeth and polish them.

That seems to be a recurring theme in Pat’s life: waste not. At the fabled Pier 7 in San Francisco, he’s been known to set crab traps while he’s skating. In Oregon he worked the hippie festival circuit cooking “Oregon’s most legit” Pad Thai. And he’s no stranger to the perennial trimming jobs available on the weed farms north of the Bay. He hustles to fund his “peripheral” pro skater lifestyle, but the more I hear his story the more I understand that’s the way he prefers to do things. 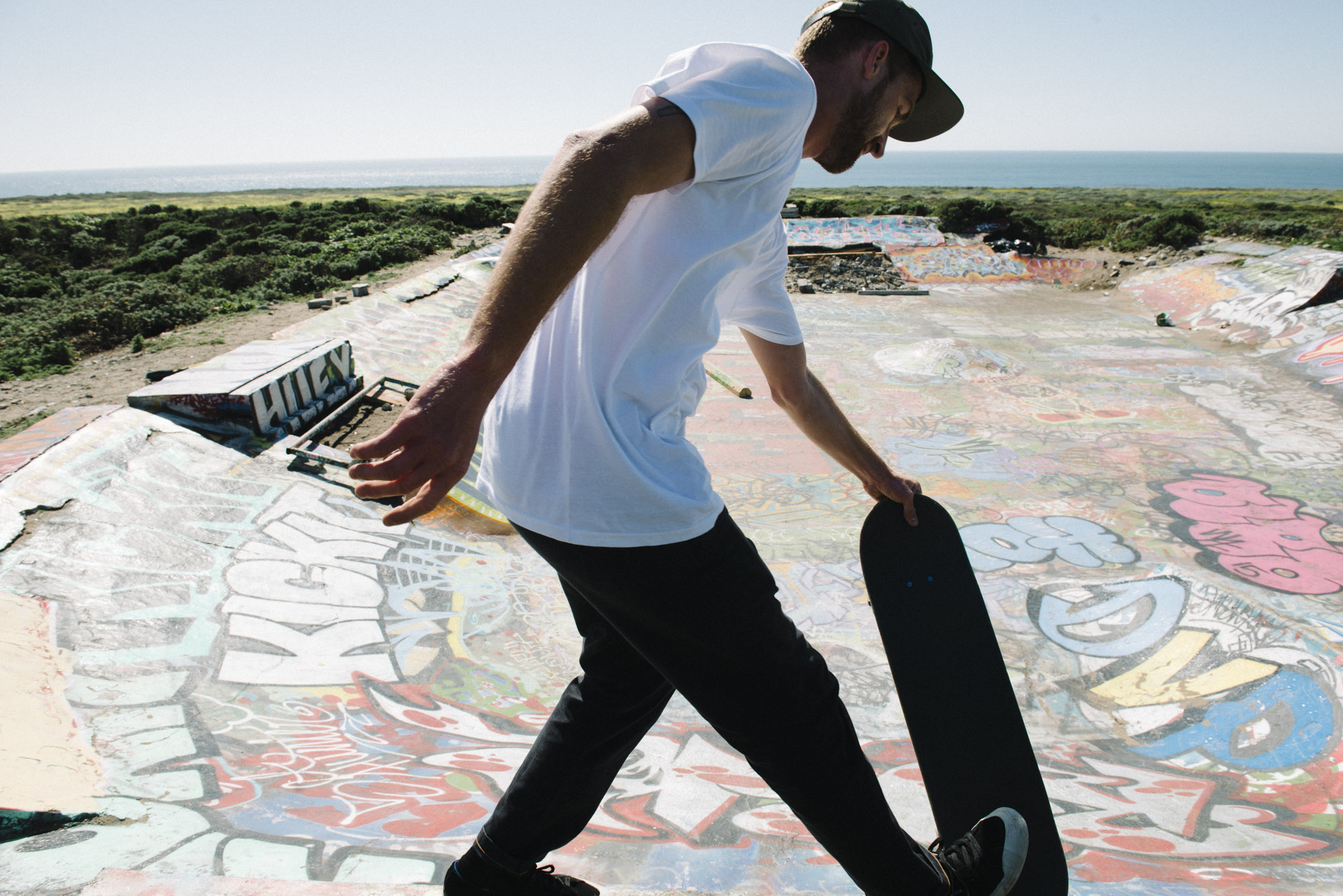 “At the end of the day skating is basically just drinking beer and playing with toys,” he says. “I love it, and I know I’m going to be skating my whole life, but I also know there’s a lot of other things to soak up.”

Of course, someone who grew up working on his grandparent’s herb and flower farm in Minnesota would say that. He’s spent entire summers chainsawing down evasive trees, building green houses, mixing soil, and propagating crops. That kind of dirt and toil doesn’t wash off easily. When he describes what they’d do at night for fun it’s hands-down one of the Zen-est things I’ve ever heard uttered from a mouth: “After dinner we make tea and watch the exotic orchids in the living room grow.” That’s provocative, nearly seditious talk in certain circles of skating. 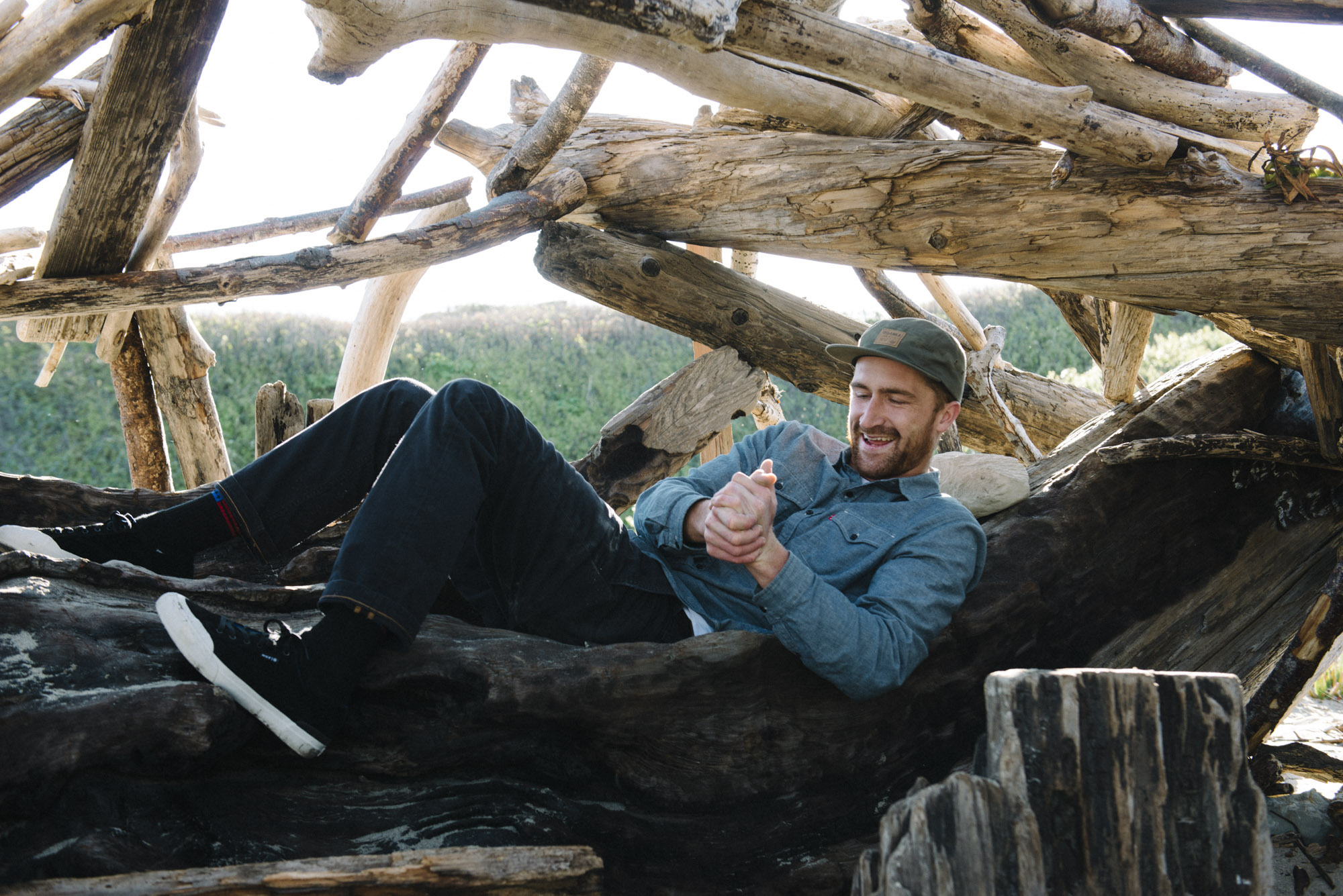 Farming and skating, who would have thought, two of the most pure and opposite distillations of the American dream that exist. Yet somewhere there along the line young Pat got his hands on Spike Jonze’s classic Chocolate video Las Nuevas Vidas de Paco. He binged the Keenan Milton part so many times he says he burned a hole in the VHS tape. “That was pretty much it, from then on I was skating everyday,” he said. And then came a cult classic of a different variety: the book On the Loose, a travelogue penned by two beatnik brothers in the ’50s and ’60s who, according to Pat “basically just travelled around the West, took grainy photos of these beautiful natural places, and wrote little bits of poetry”. The book’s thrust, Pat paraphrases, is about exploring the places few others have been. If he was just skating before, now he was skating with a vague destination (itinerary).

We arrive, via dirt road, at a crudely poured concrete pad tucked randomly into some fields. The views of the ocean and surrounding cliffs dotted with wild seagrass are cartoonishly beautiful. Pat immediately gets to work sweeping, then skating. He has designs on some kind of kickflip off one of the walls, but the transition is proving rougher than it looks. He points out how the big red graffiti letters can be sticky on the wheels. He’s a cerebral kid. And it’s expressed in his skating, which is both calculated and relentless. After getting hung up several times, he’s getting a little heated and muttering to himself – the pugilist, the yeoman in the field emerges. 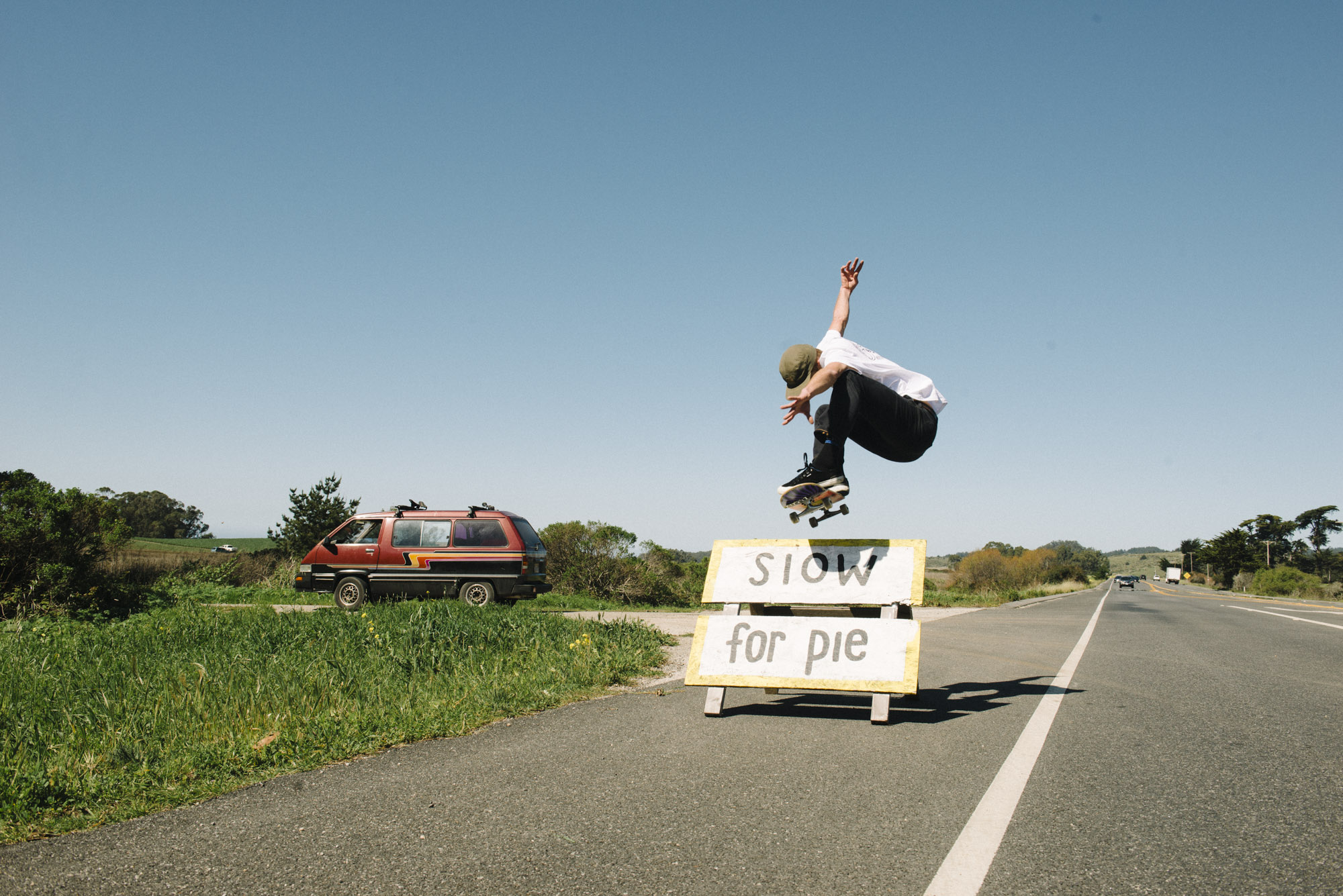 Afterward, we hit the road back to SF and Pat is showing zero signs of fatigue. When we reach city limits he’s already making plans to keep knockin’ around town. I guess he’s been around enough to know that skating isn’t kind to everyone with the passage of time, you’ve gotta milk it while you can. And after that? “My idea of the skate dream is just being around people who love it as much as I do, and you can do that forever,” he says. “And eventually I’d like to find my own setup somewhere like my grandparent’s farm.”

But first there are new spots to be skated, forests to be explored, couches to be borrowed, and an alarm clock that’s going off any minute now.

Linkedin
RELATED ARTICLES
OTHER ARTICLES
Steel City is often overlooked when it comes to the country's cultural radar despite its role in shaping electronic music.
Photographer Bud Glick recounts documenting everyday life in the area, and what it taught him about the Chinese immigrant experience.
Last week, Tower Hamlets council removed its nudity-restricting licensing conditions in a huge win for London’s kink community.
Protestors gathered outside Downing Street following the latest atrocities committed by Israel against Palestinians living in the besieged strip.
A series of photos by the late Jerry Dantzic taken in 1957 show a tender side to the iconic Jazz musician.
To mark the premiere of his new documentary on surfing giant Gerry Lopez, the filmmaker and former pro skateboarder sits down to share his unique brand of wisdom.