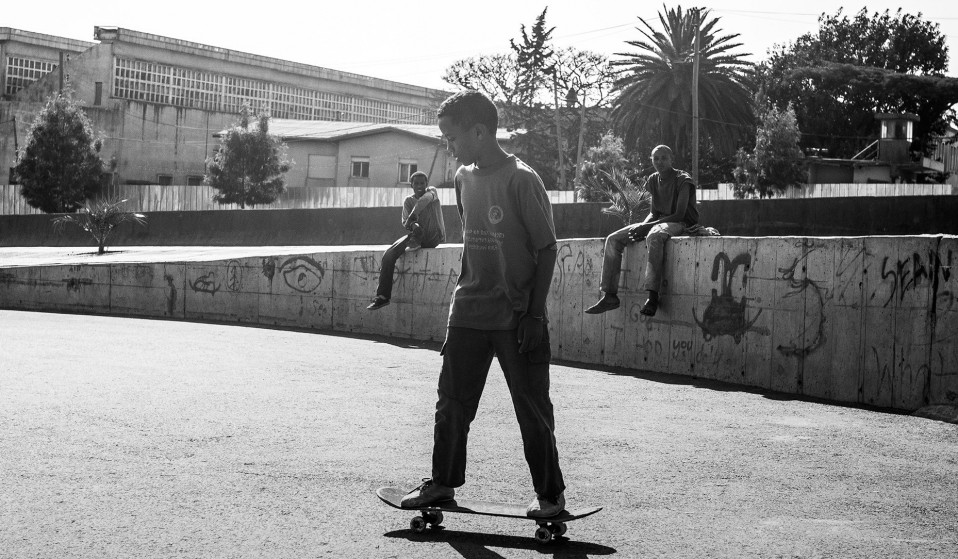 The sprawling Ethiopian capital is home to a new generation dreaming big.

In just three short years, the emerging skate scene has been one of the most inspiring avenues of self-discovery and expression for Ethiopian teens living in the city of Addis Ababa.

A local grassroots youth movement called Ethiopia Skate was formed back in 2013, to link up pro-skaters from around the globe with the youth of Ethiopia’s sprawling capital. It’s garnered a lot of international support, with international skaters getting involved in all different ways – from providing tuition on the ground to donating gear to Ethiopia’s next generation of skaters.

Berlin-based photographer Daniel Reiter caught the Ethiopia Skate bug in January 2015 and soon found himself in Addis Ababa documenting the city’s skate culture through his lens, having collected skateboards and street wear for his young pupils.

Through the support of somewhereto and curated by Jacob Roberts-Mensah, London’s Rich Mix will this week be exhibiting a selection of Daniel’s works from his trip to Ethiopia. Huck caught up with Daniel in the run up to the exhibition to find out more. 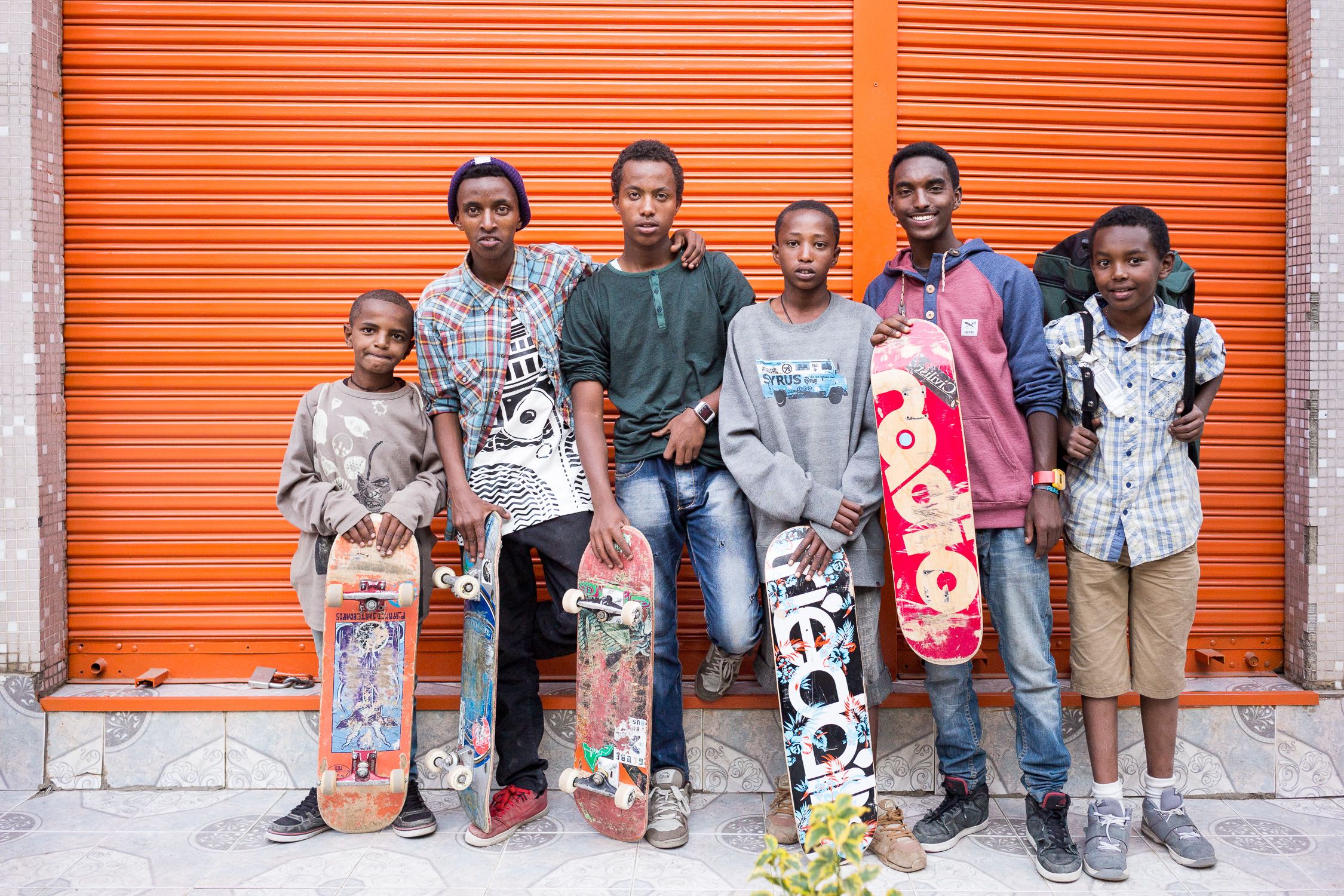 Huck: So what is your involvement with Ethiopia Skate exactly?

Daniel: I think my involvement lies mostly in raising awareness of Ethiopia Skate with my photography, whether it’s through having exhibitions, getting magazine features and via social media. Through all this we raise a lot of donations for the community, mostly from European companies and skaters.

It all started with me bringing a lot of gear and apparel to Ethiopia on my first trip, and then trying to document the few skaters I met on two different occasions. After editing almost 6 hours worth of photos, I was so stoked about the images of the kids who expressed their will to become the country’s first pro-skaters. So I decided to show it to a gallery in Berlin; I was already scheduled to have a different exhibition in July/August 2015. Thankfully the owner felt the same way about these images and supported the decision to show my photography documenting Ethiopia Skate instead. [Co-founder of Ethiopia Skate] Sean Stromsoe visited my exhibition and offered me the opportunity to become an ambassador in Germany alongside former pro skater Aurelio Macone. 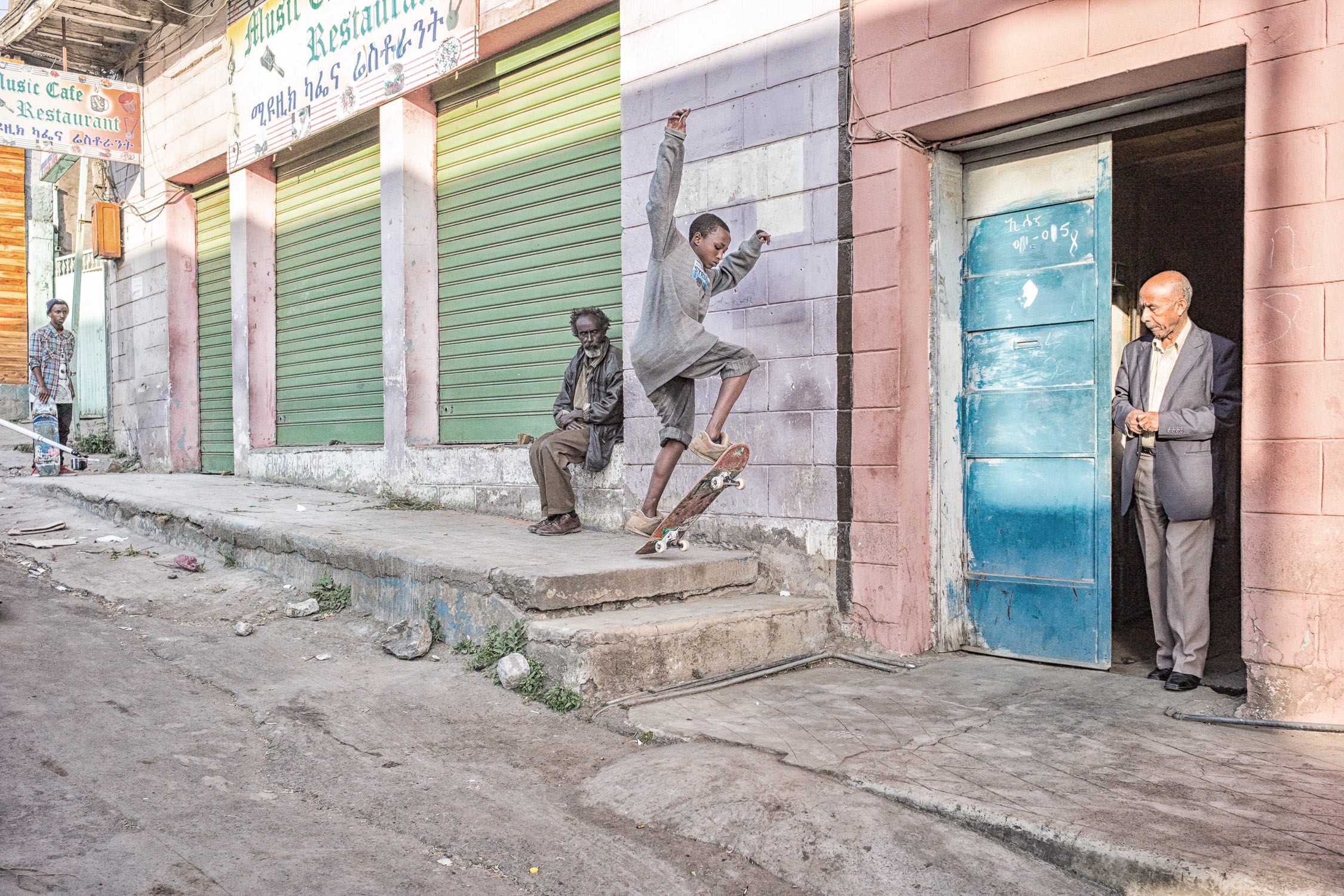 You’re part of an on-going project in Ethiopia, a collaboration between Ethiopia Skate and Make Life Skate Life, to construct Addis Skatepark – which will be the country’s first and biggest concrete skatepark and community space. How is it coming along?

[All the groundwork] started on the 25th of March. Together with about fifty volunteers on site, we prepared an even surface for the storage container. When the container was delivered it felt as if the first big step was accomplished. Henok, the most talented Ethiopian skater, decided to start a spontaneous skate session with his crew and kickflipped and ollied off and out of the container! The next day we dug out and relocated trees that otherwise would have been displaced due to the foundation. On the 27th an excavator prepared the foundation, and on the 28th, the day of my return to Berlin, most of the volunteers had already started forming the  first parts of the skate park with picks and shovels. If it doesn’t rain too much in the next two weeks, I’m confident that the park will be finished by 16th April. 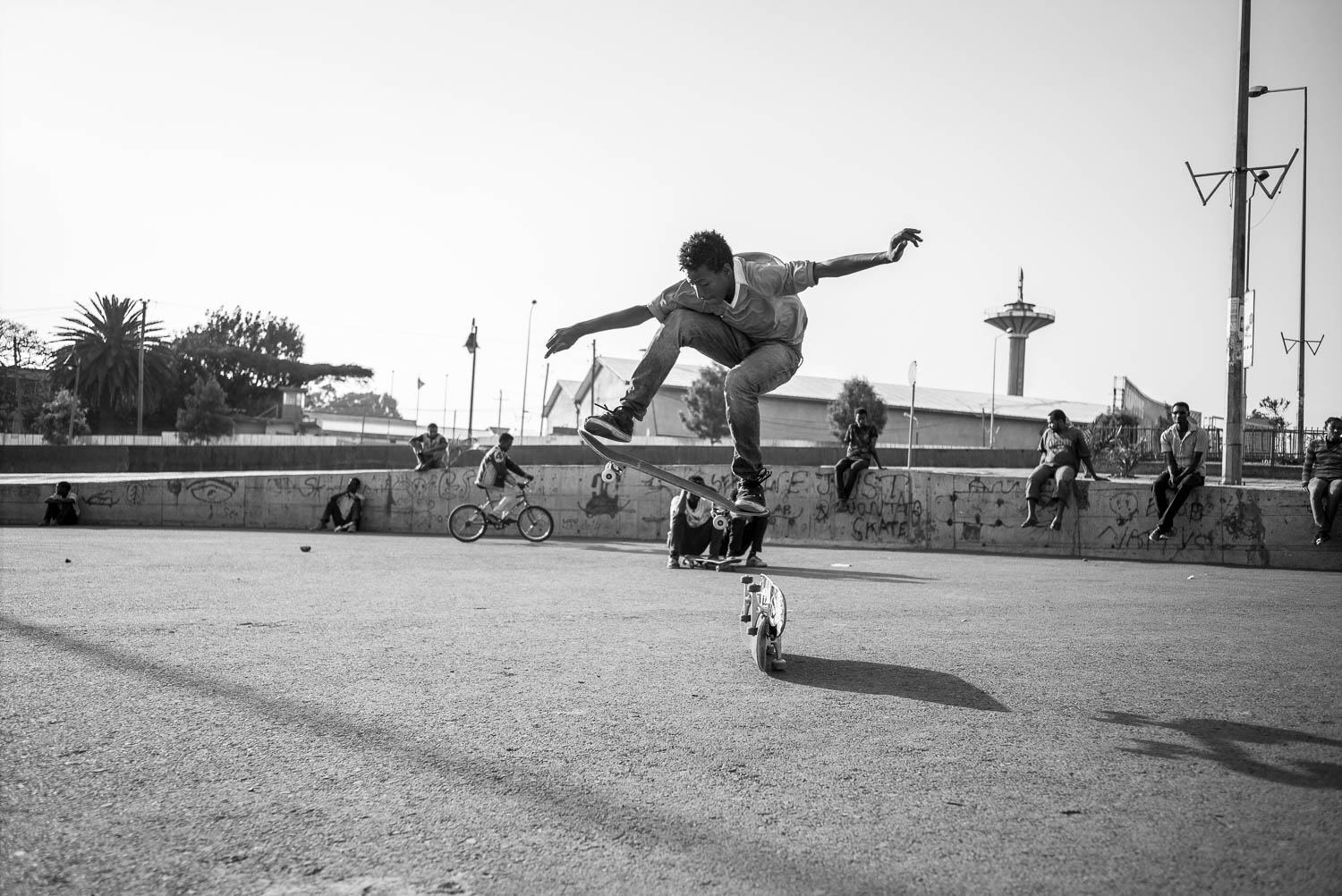 What’s your connection with skateboarding?

I was ten years old when I got my first rubbish warehouse skateboard, it was Berlin in 1987, and didn’t really know what to do with it. I started rolling down all kind of hills in my area. Then two years later when I went to high school, one of my classmates had a little skate ramp in his garden and introduced me to real skateboarding. Then it became a big part of my teenage years and I was skating like crazy on the streets of Berlin. During the last twenty years I’ve concentrated more on snowboarding and surfing, which turned out to be my real boarding passions and have been more forgiving to my bones. But my love for skateboarding never died. 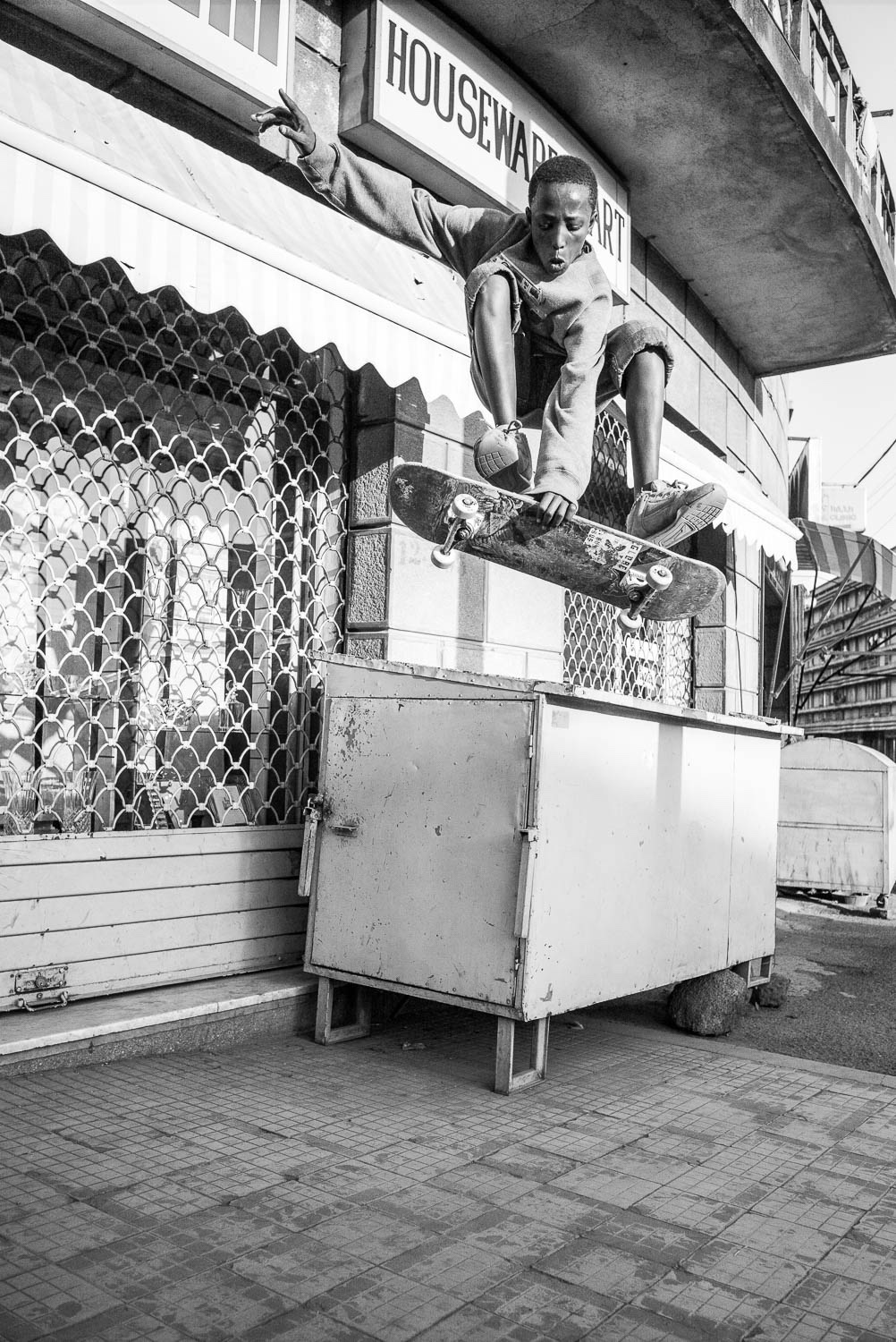 What do you think are the biggest hurdles for photographers shooting skateboarders?

Skateboard and sports photographers normally use high speed SLRs that shoot about 15 frames per second to combine them into those typical sequences shown in a lot of skateboard magazines. But shooting with a manual focus Leica M-P that shoots only 2,5 images per seconds makes me always aim to catch the decisive moment. The biggest hurdle as a documentary photographer might be that it’s really difficult to find clients that are willing to pay for this kind of photography, which forces me to keep on working in commercial photography too. 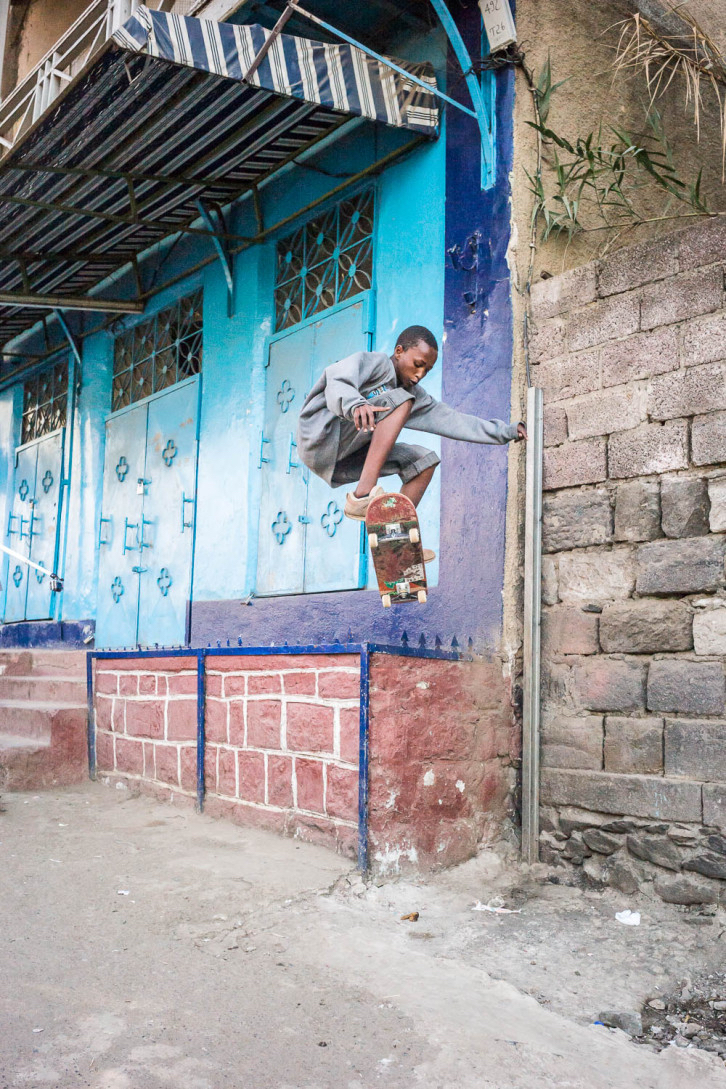 This is your first time exhibiting work from Ethiopia Skate in London. How did you and Jacob meet up in order to put this together?

Jacob interviewed me back in October, after my exhibition in Vienna for okayafrica.com, and we got along pretty well. I told him that I was trying to find more galleries around the world to show the exhibition. Shortly after that Interview he decided to support my project and started to look for a location in London willing to have us. Smart as he is, he got somewhereto to provide him with the space at Rich Mix to show my exhibition.

How does your personal life intertwine with photography?

After many years in commercial photography I almost stopped taking serious pictures in my personal life (not counting iPhone snapshots). Only when my daughter was born two and a half years ago, my passion revived. That’s also when I decided to look for a smaller but still professional camera and to get back into documentary photography.

Visit the Ethiopia Skate Eventbrite page to add your name to the guest list.

Linkedin
RELATED ARTICLES
OTHER ARTICLES
With abuse of call-centre staff on the rise, many are now speaking out about the hostility they’ve faced.
As the role of the nuclear family is increasingly called into question, people are finding new ways to exist outside heterosexist norms.
Ahead of the policing bill reaching its final stages in the Lords, protestors came together to rally against the legislation.
The novelist discusses his electrifying debut, which offers a deft examination of masculinity under late capitalism.
Photographer Melanie Nissen recalls capturing the characters, fashions and rarefied chaos of a rapidly-expanding set of punk bands who helped to redefine the genre.
Those set to be impacted by the governments ’undemocratic’ bill explain why it risks silencing them.