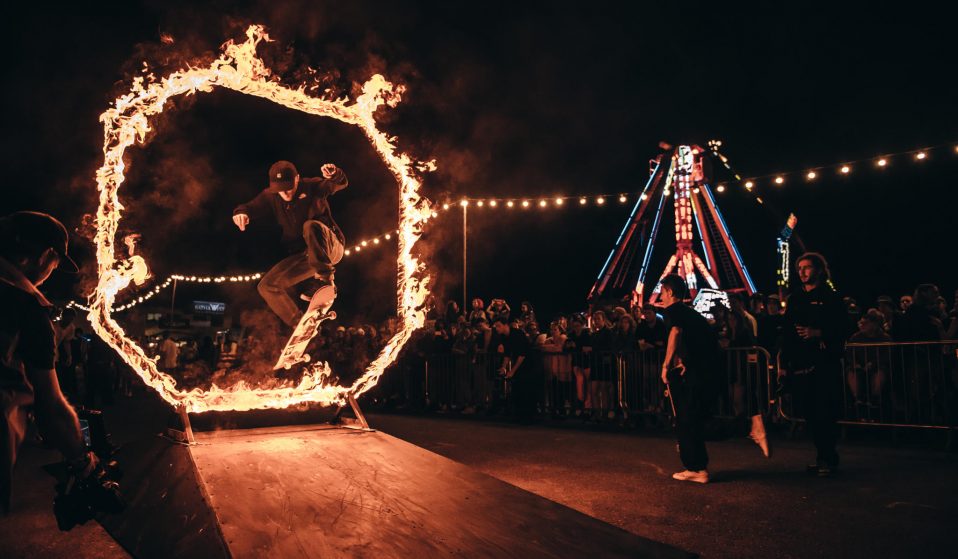 Following his appearance at NASS 2019, we speak to the young skateboarder about his journey from wide-eyed kid to 2020 hopeful.

Following his appearance at NASS 2019, we speak to the young skateboarder about his journey from wide-eyed kid to 2020 hopeful.

On a weird old day in August, one where the weather can’t seem to make up its mind, skateboarder Alex Decunha is playing the waiting game. “I might go skate in London,” he says. “I’ve just had a delivery arrive, new boards. But let’s see if it rains.”

The 22-year-old from Milton Keynes is considered one of Britain’s brightest young talents. As one of five skateboarders chosen to receive funding to help them try and qualify for the 2020 Olympics, it’s been a busy year for him. Although, with his laidback demeanour – all slow, strung-out sentences – you’d never guess.

Decunha is fresh from competing at NASS, a festival he’s become a regular fixture at. “The course this year was really fun, it was cool to see a lot of my European friends there too,” he says. “It’s really cool to see that it’s reaching out to more than just the UK crowd now.”

After the festival, we spoke to Decunha about his journey in skateboarding – and why he doesn’t care much for those who criticise it’s involvement in the Olympics.

Do you remember the first time you saw someone skateboarding?
Yeah, I was six years old. I was walking through my local shopping centre in Milton Keynes, there was a big halfpipe ramp set-up in the middle, with a bunch of skaters doing it a demo.

There this [skater] Lee Blackwell. I saw what he was doing and a six-year-old me was like, ‘I wanna be doing that. So my parents sorted me my first board and I started messing around in the garden.

What was it about seeing Lee that captured your imagination?
It was never something I’d seen before. Before then, I hadn’t really ever seen any tricks – or anything like that. To see someone doing that – in the air, crazy stuff like that – it opened my eyes to a whole different world.

Once you started, did you take it to naturally?
I got into it pretty quickly – spending most of my days going out skating. My dad would take me out and things like that. I got sponsored by a little skate shop when I was seven. So yeah, it was pretty quick.

Can you bookmark the moment things began to get serious?
It’s a hard one. But I suppose when I turned 18: it was either get a real job, or actually pursue the skateboarding stuff – and this was before the Olympics or anything – and obviously I chose skateboarding. So I just started taking as many skate-related jobs as I could.

What did your parents say when you made that call?
They’ve always known. I’ve done it for more than half of my life now. It’s something I‘ve grown up with – I’ve always chosen skateboarding over everything. But they obviously spoke to me and said, ‘Okay, we’re going to do this properly then.’ I have really supportive parents. 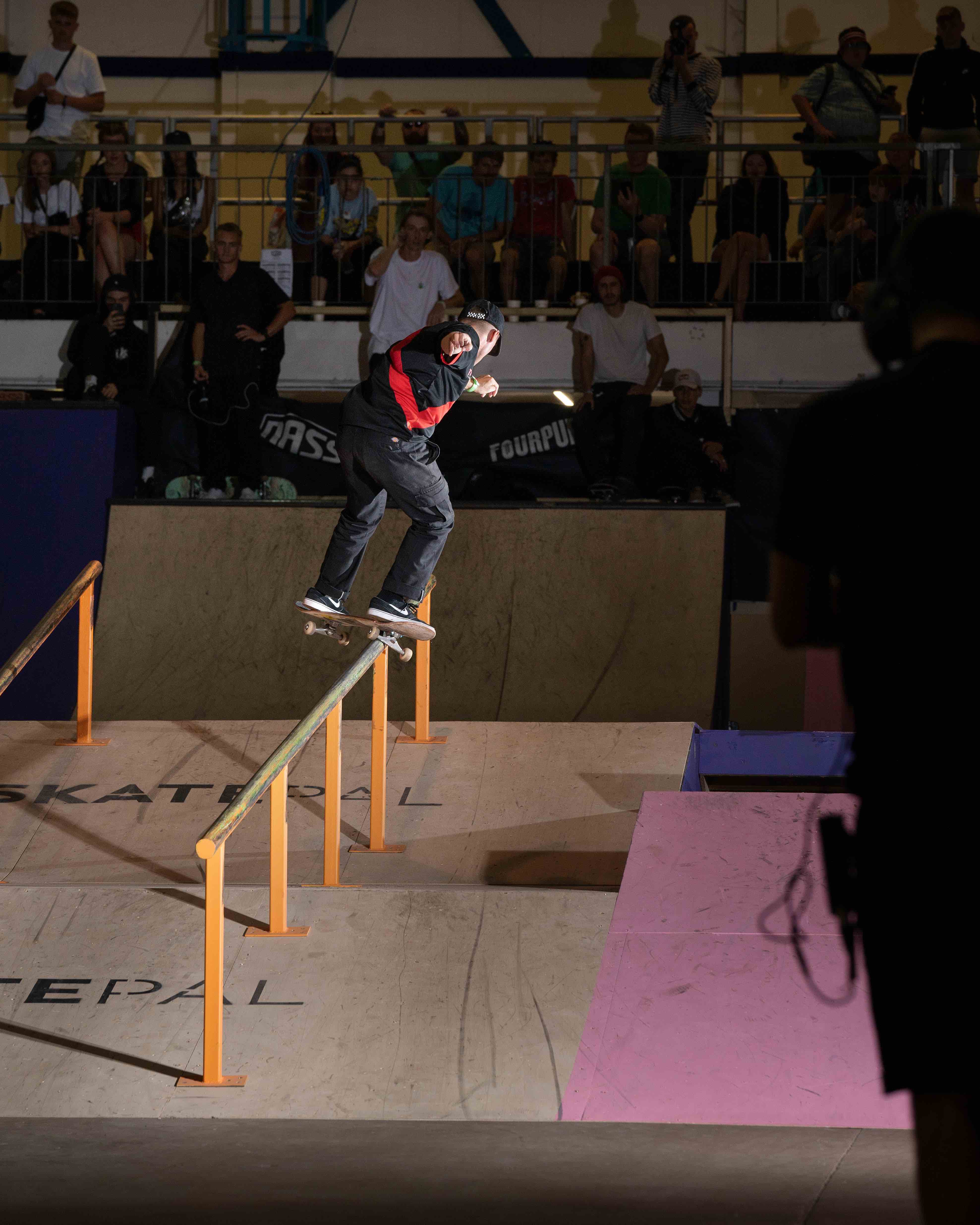 Who are your biggest influences?
Well, I’m definitely going to see Lee Blackwell is one of the main ones, being the guy who got me into skateboarding. He’s one of my friends to this day. I ended up skating and doing demos for the same ramp that I first saw when I was six years old. I still see Lee at competitions. He’s still a super nice guy, super level headed. Knows what he’s doing!

As a street skater, do you still face opposition from ignorant members of the public?
I don’t think that’ll ever change to be honest. It’s definitely a thing that happens near enough on the daily.  But we’re not there to cause trouble. We’re working hard.

What would you say has been your greatest achievement since you started?
It’s just been great to actually have the chance to be able to travel the world doing what I love. I know it sounds really cliché, but the fact that I’m actually being able to do that – visit so many different countries, meet so many great people and see them all over the world – yeah, it’s great.

You recently competed at NASS. When it comes to UK competitions, do you feel more pressure as a homegrown skater?
Not entirely. The only difference is that the people at the contest will be some of my really good friends. We challenge each other. I just like skating contests in general. I never get nerves or anything like that, I just really enjoy it. It pushes me, being put on the spot. But yeah, all my mates are competing, so if they beat me I won’t hear the last of that.

If you were to give one piece of advice to your younger self, what would you say?
It’s definitely worth picking certain kinds of tricks to maybe spend a day focusing on. Like, learn a new flip trick, and spend the whole day keeping that down. In contests, if you have one trick where you can click your fingers and do it anywhere, wherever you want, just like that, you’ll be grateful for it.

Alex Dechuna was speaking to Huck following his appearance at NASS 2019. For more information on the festival, visit the official website.

Linkedin
RELATED ARTICLES
OTHER ARTICLES
Rhiannon Adam spent three months capturing an ageing society wracked by division, isolation, and the aftermath of scandal.
Following the announcement of an 80% hike in the energy price cap from 1st October, crowds gathered outside the offices of energy regulator Ofgem to protest and declare their intention to undertake a payment strike.
By turning a real-life crisis into daytime television fodder, TV bosses have once again shown themselves to be completely out of touch with audiences.
Financial turmoil is pushing people who work in the sex industry into more dangerous and desperate situations as a means of survival.
Birdy Chu reflects on documenting the historic moment in which the territory was formally passed back from the UK to China.
Yesterday thousands gathered outside Buckingham Palace after news of the Queen’s death broke.