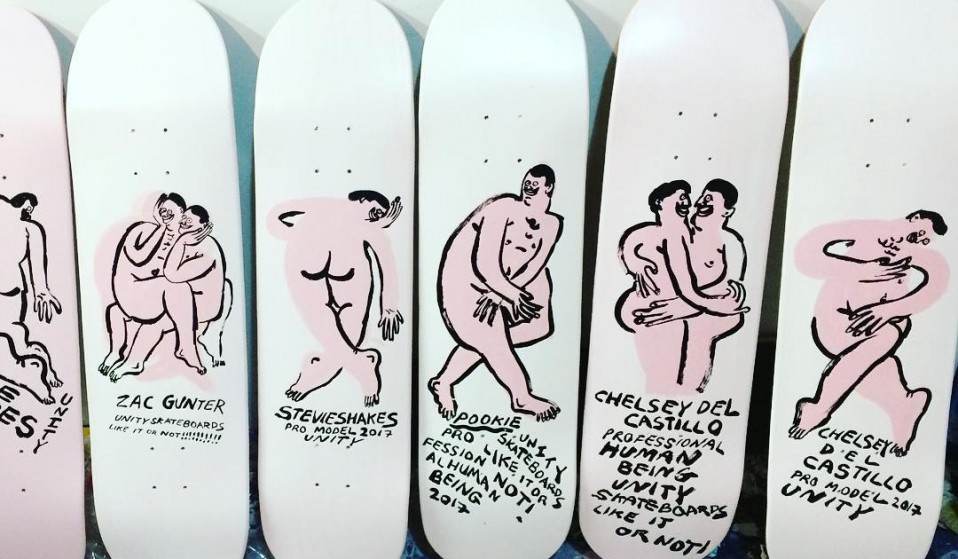 Unity Skateboarding is difficult to define. The company, started by artist Jeffrey Cheung, does a little bit of everything – publishing zines, designing boards, and hosting regular skater meet-ups. It even has its own ‘creative space’ in Oakland, which comes complete with a radio station, print studio, zine store and community workshop programme. As a company, its ambitions are broad, but its aim is still resolutely simple: To make skateboarding more inclusive.

According to Cheung, who started Unity in 2013, the goal is to offer a safe space for skaters who’ve felt pushed out by the scene’s “macho-bro” culture. After feeling alienated as a queer person of colour, he began to reach out to other artists and friends who felt a similar way. The community grew, and now, along with his boyfriend Gabriel Ramirez, Cheung is striving to create a more accepting environment for queer and POC artists, skaters, and outsiders. We caught up with him to find out more.

Why do you think skateboarding can be so alienating for queer people?
In the past, skateboarding attracted those who didn’t fit in, were weird, those who may have been bullied or picked on, anti-jock, and even queer, but somehow the macho-bro mentality has become ingrained in the culture of skateboarding.  Homophobia and transphobia can be witnessed in almost every facet. You look at certain skate mags, videos, ads, brands, and they are all from a straight cis-male’s perspective. For example, often times the depictions of women in skateboarding have objectified or sexualized them – and there has not even been any queer representation that is not homophobic until recent years. Despite its counter-culture attitude, skateboarding has, for the most part, remained homogeneous and conservative. This toxic mentality stems from society and its dated ideas of gender norms and masculinity. All of this contributes to the alienation of queer people in and out of skateboarding, especially for folks who don’t identify or present themselves as masculine or don’t present their masculinity in ways which are seen as acceptable. 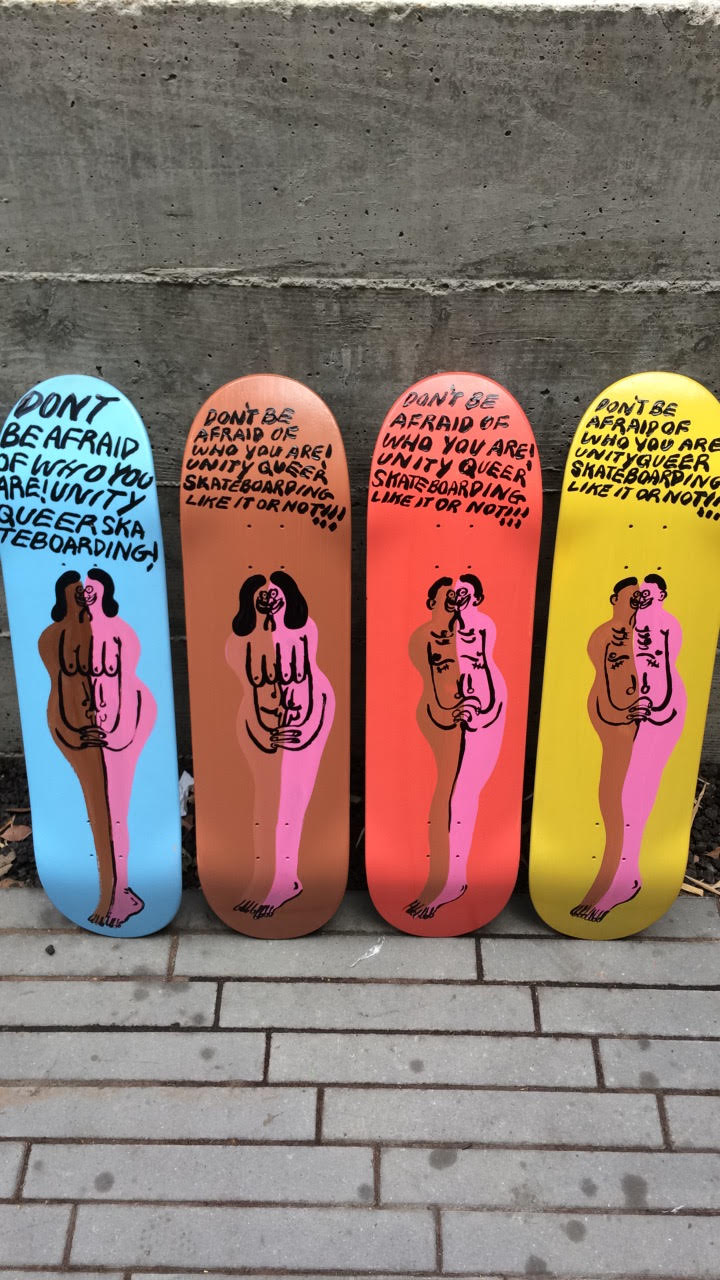 As a queer person, how have your personal experiences affected this project?
I knew I was gay at an early age but never felt comfortable enough to come out to my friends as I would often hear them make homophobic remarks. It’s scary to be a queer person in a culture that is hostile towards you when you are constantly hearing degrading comments about your sexuality or identity.

I wanted to start Unity for the next generation of skateboarders, to show them that queer people do exist. I felt alienated because of my sexuality. If something like this existed when I was younger, it would have completely changed my life and the way I viewed myself. I would have felt better about who I was and would have had a sense that I wasn’t alone, and maybe I would have never stopped skating. Unity Skateboarding has been so inspiring to me because I am seeing queer skaters everywhere across the world through social media, and there are way more than I would have ever imagined. There seems to be a new positive energy and movement going on – it seems more queer people are inspired to learn how to skate or get back into it, and together we are breaking down stereotypes about what a skateboarder looks like or who can or can’t skate. In a way I think it is a step going back to skateboarding’s roots, where people embrace being weird, being different and going against conventions. 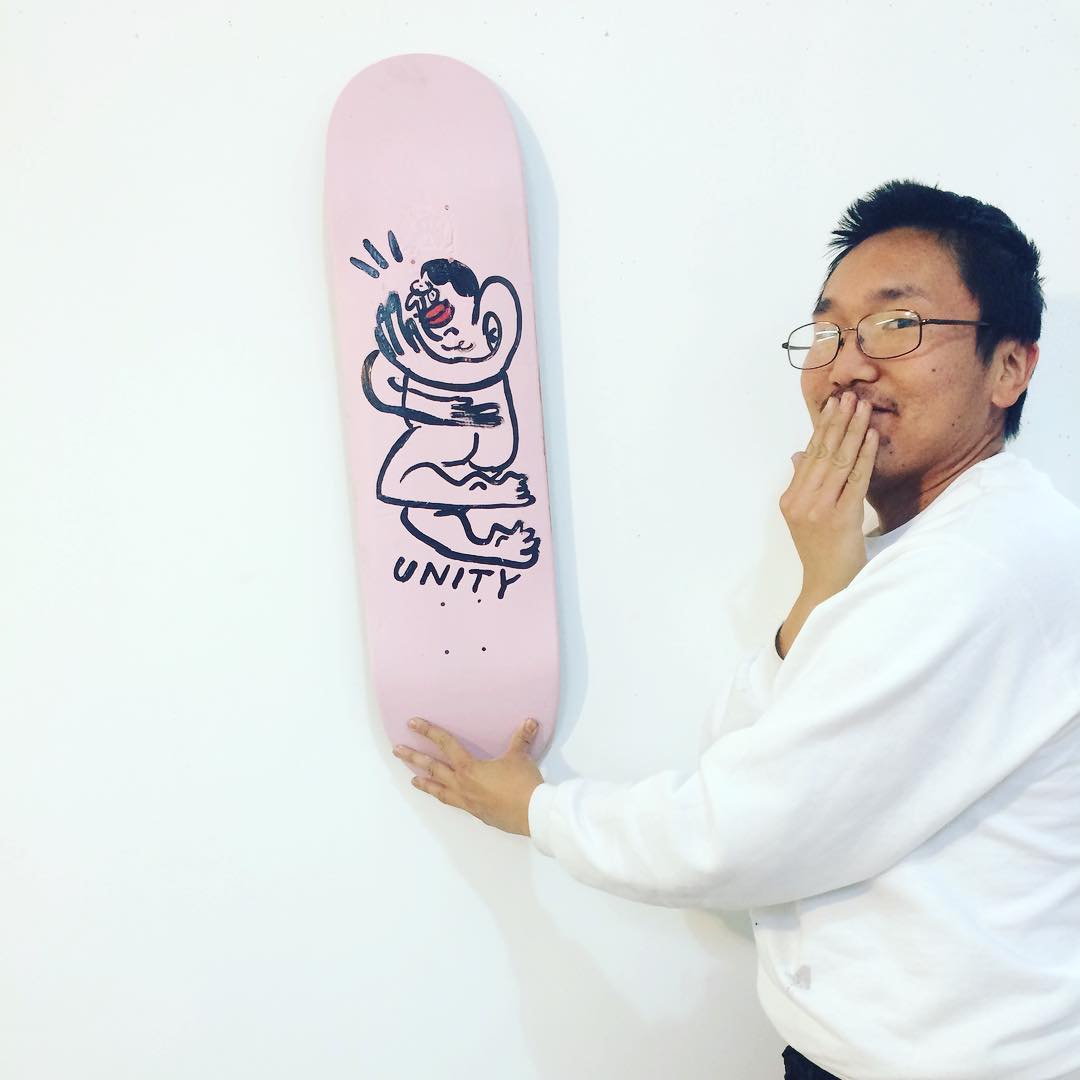 Do you think POC representation in skateboarding is also a problem? Do you have plans to address this?
I actually think that skateboarding has helped break down racial barriers and has been able to bring people together from different backgrounds. There have been black and brown skaters since the beginning of skateboarding, but I think that the mainstream portrayal of skateboarding can be pretty white. I think that femme, trans, and queer people of colour are the most marginalised in the society we live in, and unfortunately, this is also reflected in the skateboarding world. Brian Anderson officially coming out was a big step for queer people in skateboarding, but there is still a lot to do until skating can be inclusive to people of all identities. We are always especially supportive of QPOC people that skate or want to learn how to skate, and try to provide them with the resources they need whenever we can. 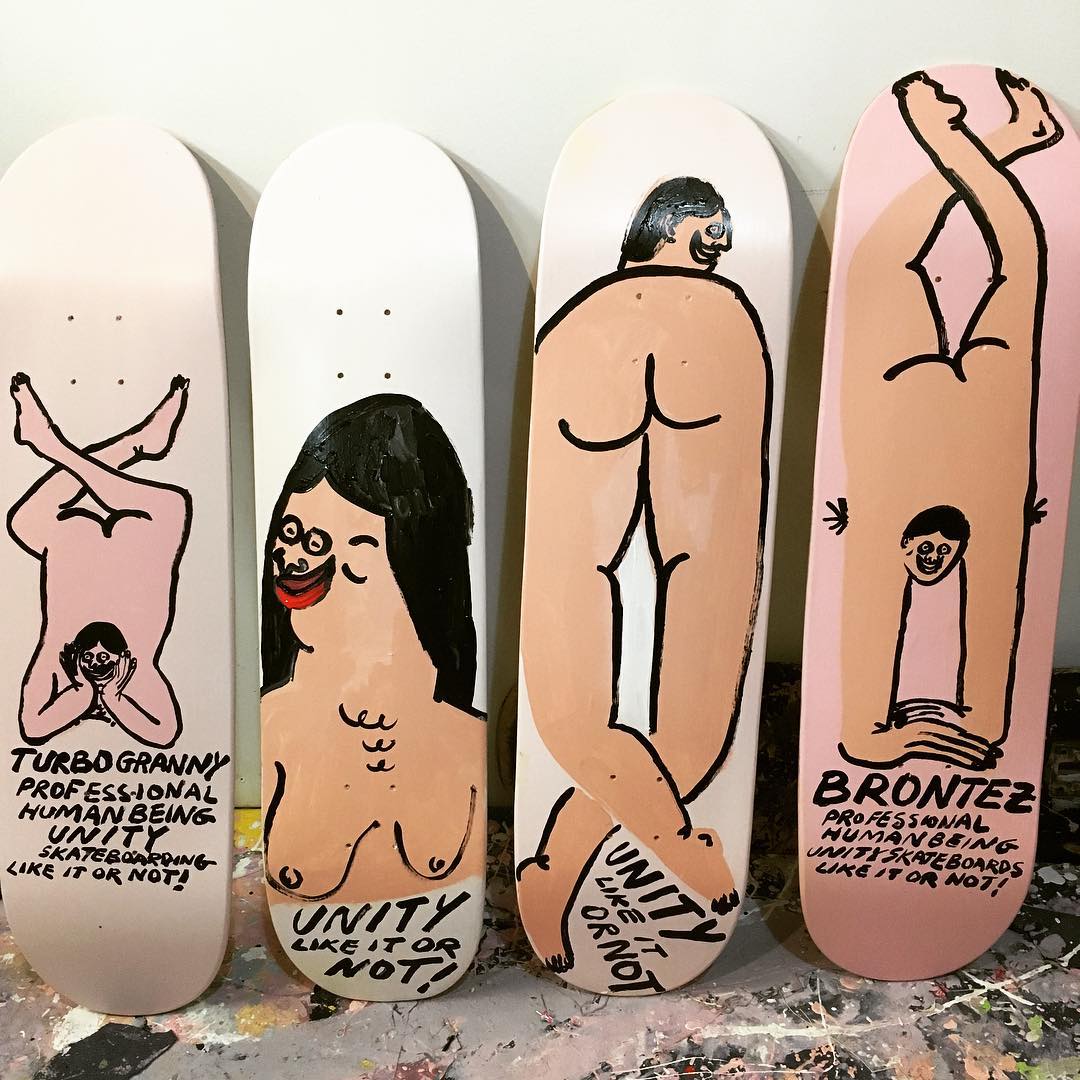 Is there a reason you’ve chosen Oakland as your base?
I’ve lived here most of my life. The whole Bay Area is changing fast but I still think Oakland is a really unique and diverse place that is unlike anywhere else in the world. A lot of people are getting pushed out, but there is still a vibrant punk, queer and art scene. It’s amazing to be skating around and run into other queer skaters on the street. We have some plans to do some travelling, though, and want to host queer skate events all over the world.

Unity is quite a broad project – or it’s a name you at least use a lot. You’ve designed skateboards, published zines… what else do you intend to do? What does the future hold?
Unity actually first started as a music project, a two-piece band with my boyfriend. It’s now a full band and we will hopefully come out with a new record sometime soon.  We’ve also been working with queer youth more since we started the skateboarding project and we really enjoy it. Perhaps Unity can one day also be some sort of creative arts program for queer youth?

Linkedin
RELATED ARTICLES
OTHER ARTICLES
A new edition of a seminal book brings together iconic images of the band onstage in their full glory and backstage in moments of unguarded camaraderie.
The last few years have seen an increase in LGBTQ-led initiatives to feed the hungry, with many finding ways to stay afloat despite the challenges.
Thomas Hoepker‘s images taken during a road trip across America provide a searing social commentary about a divided country.
Curator Antoine de Beaupré discusses his immense record collection and what it tells us about the intersection of music, photography, art, and commerce.
Proposals to introduce a minimum GCSE threshold for student loans will disproportionately affect those from marginalised backgrounds.
Wealth inequality and the rising cost of socialising is placing a strain on people’s relationships, reports Eve Upton-Clark.