Outdoor / Skate / How skaters are reclaiming the world’s forgotten spaces 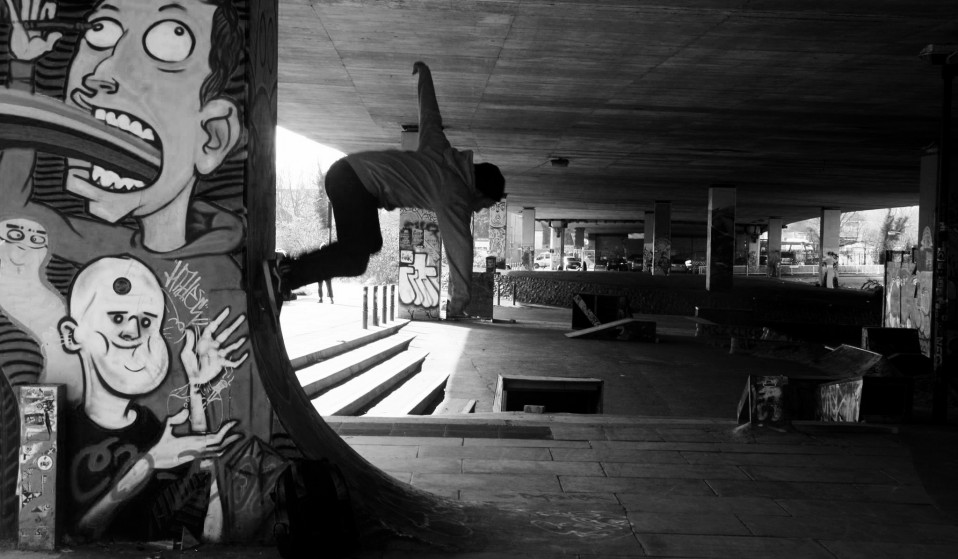 There’s been a resurgence of DIY skate spots opening across the globe, with young skaters taking back the wastelands that the public has left behind. We visit one space hidden under the M32, in Bristol, to find out why.

There’s been a resurgence of DIY skate spots opening across the globe, with young skaters taking back the wastelands that the public has left behind. We visit one space hidden under the M32, in Bristol, to find out why.

The M32 motorway runs straight from the heart of Bristol, jutting North East from the city and connecting it with the world beyond. Tens of thousands of people travel across its top every day – but to sink beneath the tarmac is to enter a world that few tend to visit.

Here, brake dust lines the floor, and there are low rumbles from the cars above. When the wind fails to blow, the fumes settle and make the air thick and stifling. The main purpose of this area is to act as a sink for the other forgotten objects of the city, housing the rubbish, dust and rough sleepers in need of protection from the rain.

But as the flyover passes by Stapleton Road Station, this area becomes home to something totally different: an entirely self-built DIY Skatepark.

10 years ago this was just like every other section of the flyover. Theo Newton, a local skater, remembers going there before anything had been built. “It was a dead zone”, he tells Huck. “People would put objects in every now and again and you’d skate them when it was raining, but it definitely wasn’t a skatepark.” 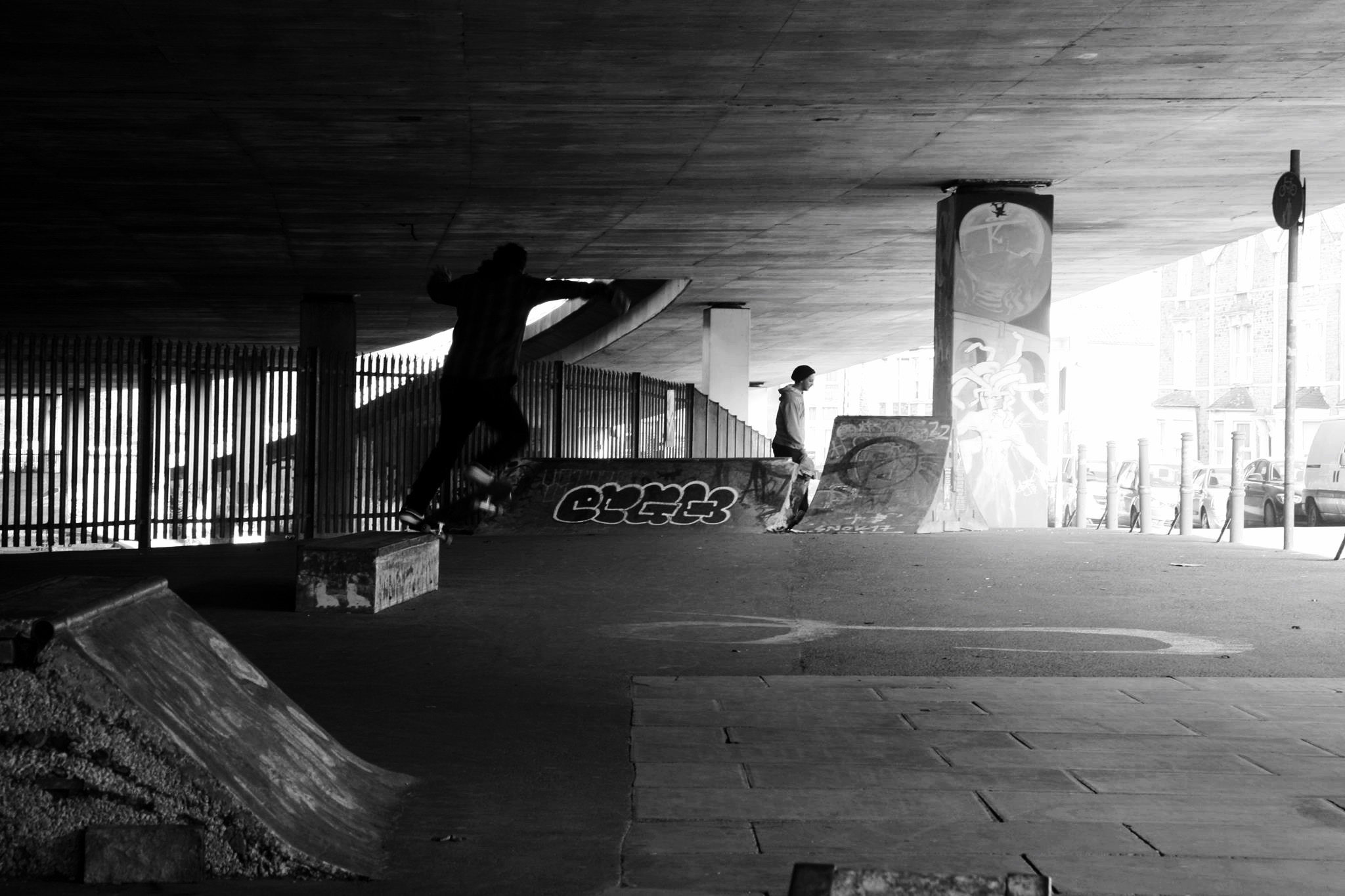 Things first started to change about seven years ago, when a concrete quarterpipe got built up against a barrier. Most people thought that the council would remove it within a few weeks, as tends to be the case when skaters decide to start building things for themselves. But they never did.

Tom Bell has been building parts of the skatepark at M32 for the past four years. “[The plan was always to] just whack something up, see how long it lasts, build something else,” he explains. “Over time it built up, until recently it just snowballed when we realised the police weren’t coming.”

The snowballing started once the park’s half-pipe arrived. A local skater initially built it in his back garden for his kids, but the neighbours took exception to the noise and he was forced to relocate it down to M32. After that, the spot started to attract more and more skaters, with more and more obstacles getting built. But even now, with space at a premium, the spot is ever changing, as skaters continually make and reshape the park.

“It’s more creative and experimental,” Theo says. “If it works, wicked – but you can always destroy it and build something else.” The space is not static, but exists as an ever-changing tapestry under the rule ‘skate, destroy, rebuild.’ 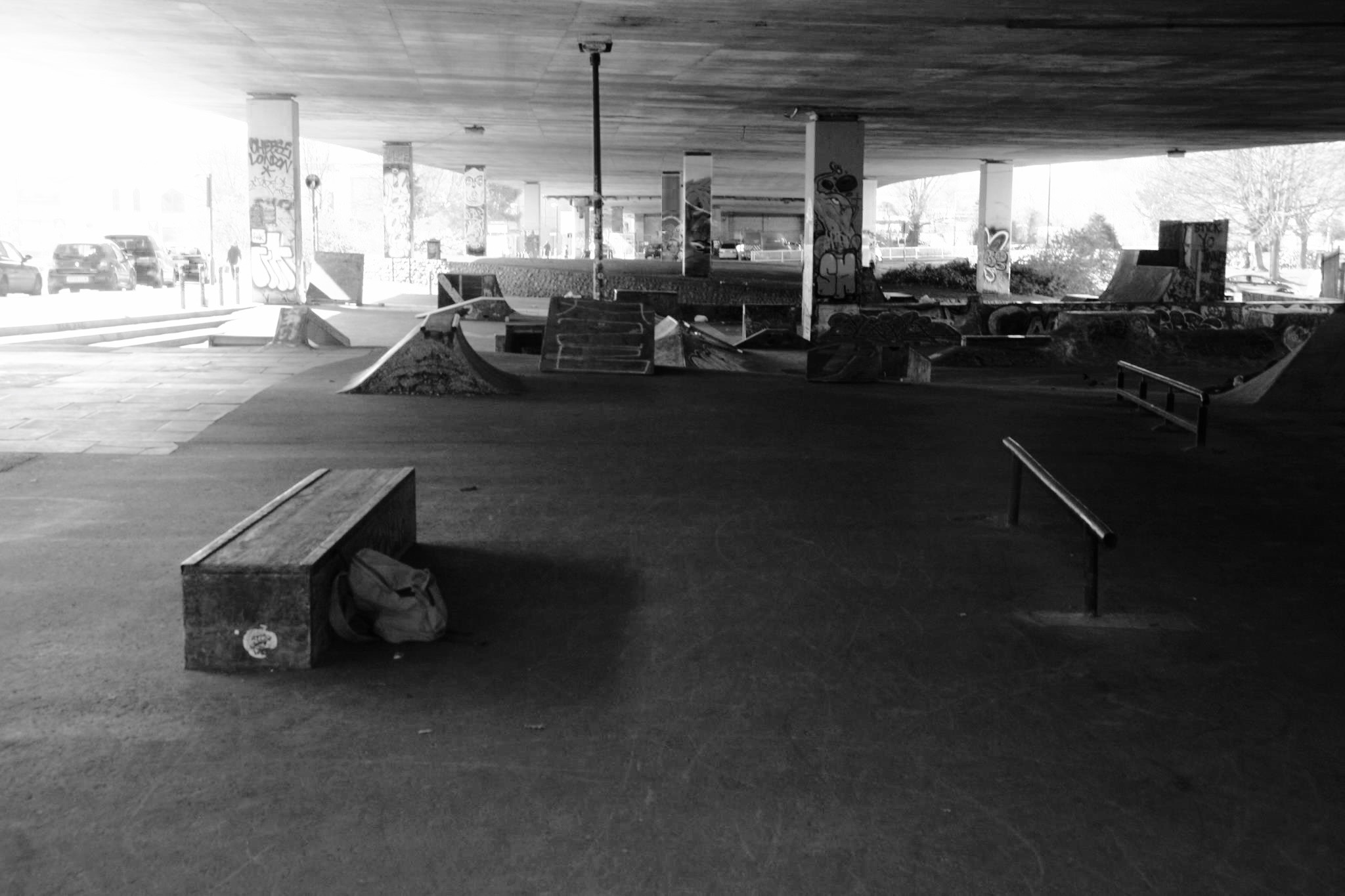 “Over the last 10 years you’ve seen DIY become a mainstream part of skate culture,” says Iain Borden, Professor of Architecture and Urban Culture at the Bartlett School of Architecture. “The thing that’s bizarre about DIY is that it has occurred at exactly the same time as all these skateparks are being built. So you would think that as there are more and more skateparks being built, that would be exactly the time when skaters wouldn’t bother to build their own skateparks.”

But exactly the opposite has been the case. Despite councils increasingly building more – and better – skateparks, there’s been a surge in skaters across the globe taking concrete, wood and steel to make the cities wastelands into their own DIY spots. While places like Burnside in Portland provide the inspirational blueprint for what a DIY can become, skaters are pushing the boundaries and creating skate spots outside the realms of government, in areas everyone else has abandoned.

Tom Bell says this new culture of DIY comes down to ownership. “When you put time and effort and love into making something, you have a connection with it,” he explains. “When I skate on the objects that I’ve built, I feel totally comfortable on them.” It is not simply what you create, but the process and act of creating it. In coming together skaters are able to build a sense of community and shared identity that they project onto the space that they build, creating a place which they as a community own. 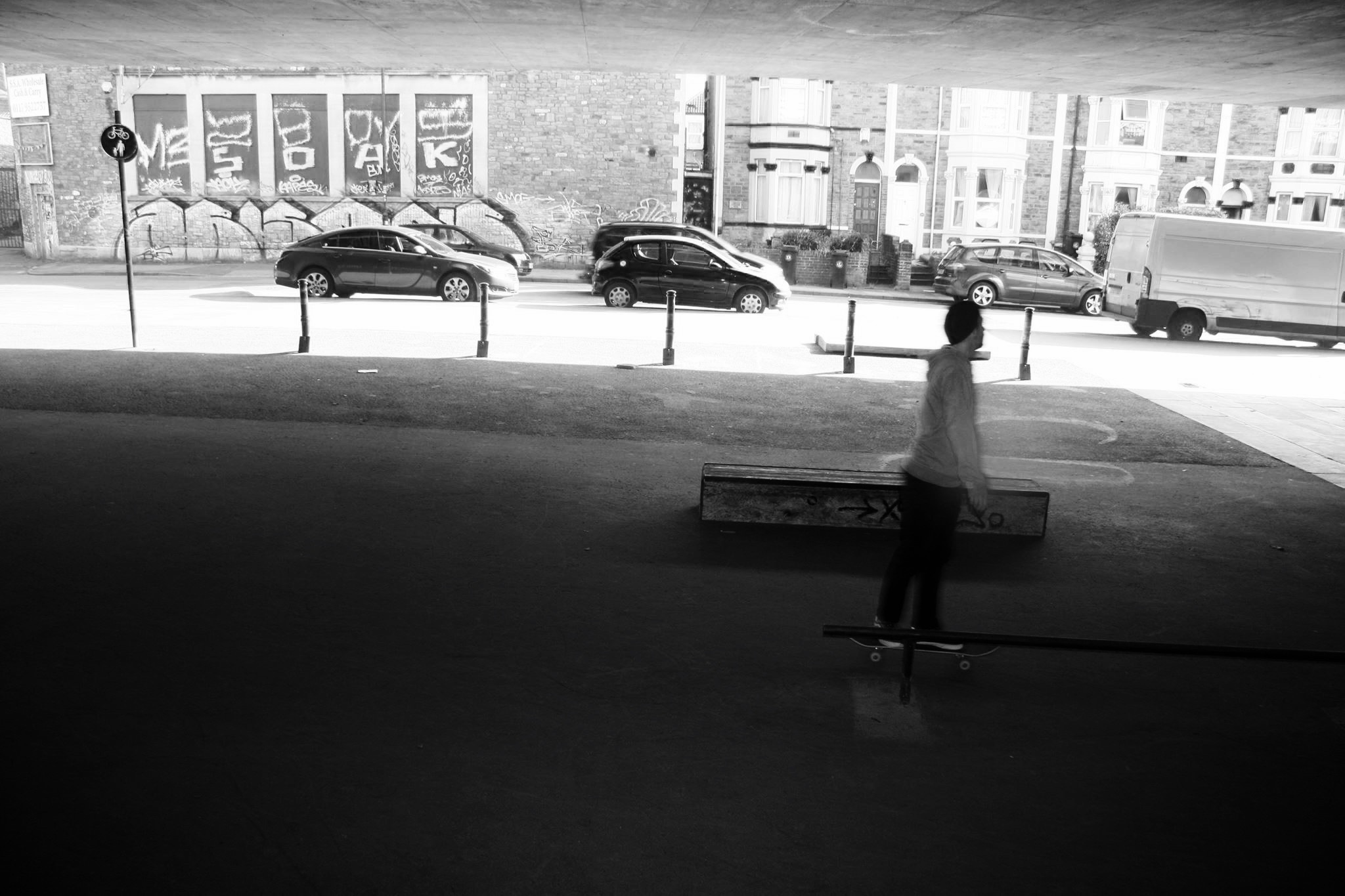 For most skaters, this sense of ownership over a place is rare. While skateparks continue to get built, skaters remain unwanted in our city centres, with skate-stoppers and security guards acting as the guardians of our supposedly public spaces. Pushed into state-sanctioned skateparks, skateboarding has become a part of the mainstream, losing touch with its anarchic roots.

“One of the things that’s happened to skateboarding in the last 10 years is that it’s increasingly lost that sense – and I’m not saying this is good or bad – of it being truly counter-cultural,” adds Iain Borden. “DIY is a way for skaters to reassert transgression, to reassert difference, reassert a sense of independence.”

M32 is a far cry from family friendly. Whilst the presence of the skaters has lowered the number of dealers and pimps, they’re not absent, and neither are the homeless who regularly use the end of the half-pipe as both a bed and a toilet. But what this offers the skaters who use it is a chance to fully define what is allowed there. It represents a public space in that they are able to fully appropriate it and use it the way which they see best.

“You can shout, chuck shit around, smoke weed and get drunk,” says Theo, fondly. “That’s the thing with M32, it’s for people who in society are closer to the gnarlier side and they can feel part of that place. And that’s why it’s been successful; because if you wanna go have a spliff and a skate, you can do it under there and no one’s going to bother you.”

Linkedin
RELATED ARTICLES
OTHER ARTICLES
Filmmaker Laura Poitras discusses her new documentary which traces the remarkable life of the artist-activist and the impact of her battle against the US opioid crisis.
Since 2007, Gideon Mendel has made 20 trips to document floods in 13 countries. The result is an alarming record of what has already been lost to the climate emergency.
Activists and campaigners are fighting back against new laws that would seriously undermine the ability to take industrial action, calling it an attack on fundamental workers' rights.
At his West Bank restaurant, Fadi Kattan established himself as the voice of modern Palestinian cuisine. Now, he’s bringing his innovative, bold flavours to the UK’s capital.
A new exhibitions brings together the work of photographers who documented the deep unrest of these pivotal decades.
Social prescribing connects people with non-medical support to improve their health and wellbeing – but some experts worry it’s just a stick plaster solution.