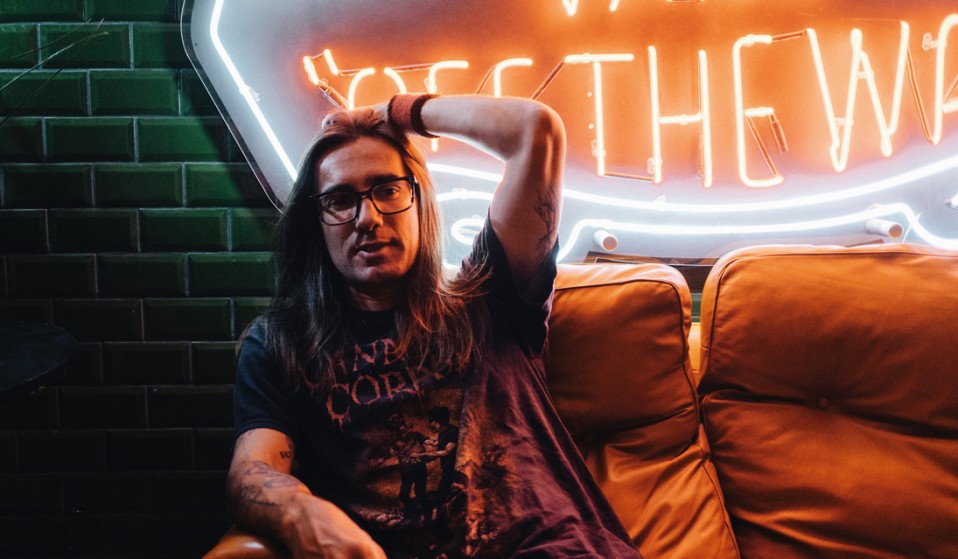 Tony Trujillo blazed a trail for park terrain skateboarding, developing an aggressive style worthy of iconic status. Now, 20 years into a unique career, he’s finding new ways to forge ahead on his own terms.

You! Up there! …Tell me what to do.” Tony Trujillo is standing in the grey bowl at London’s House of Vans, playfully yelling at a photographer and looking ill at ease.

His demeanour seems odd in a space where Tony looks so at home; it’s just that having a camera in his face causes him to look like a kid in a grown-up’s body.

The 35-year-old – shoulder-length hair and glasses, black Cannibal Corpse t-shirt and shorts – starts twirling his board until it lands between his legs and he pretends to jerk off with it. The gesture is less ‘Fuck you’ and more ‘Please get this over with’. 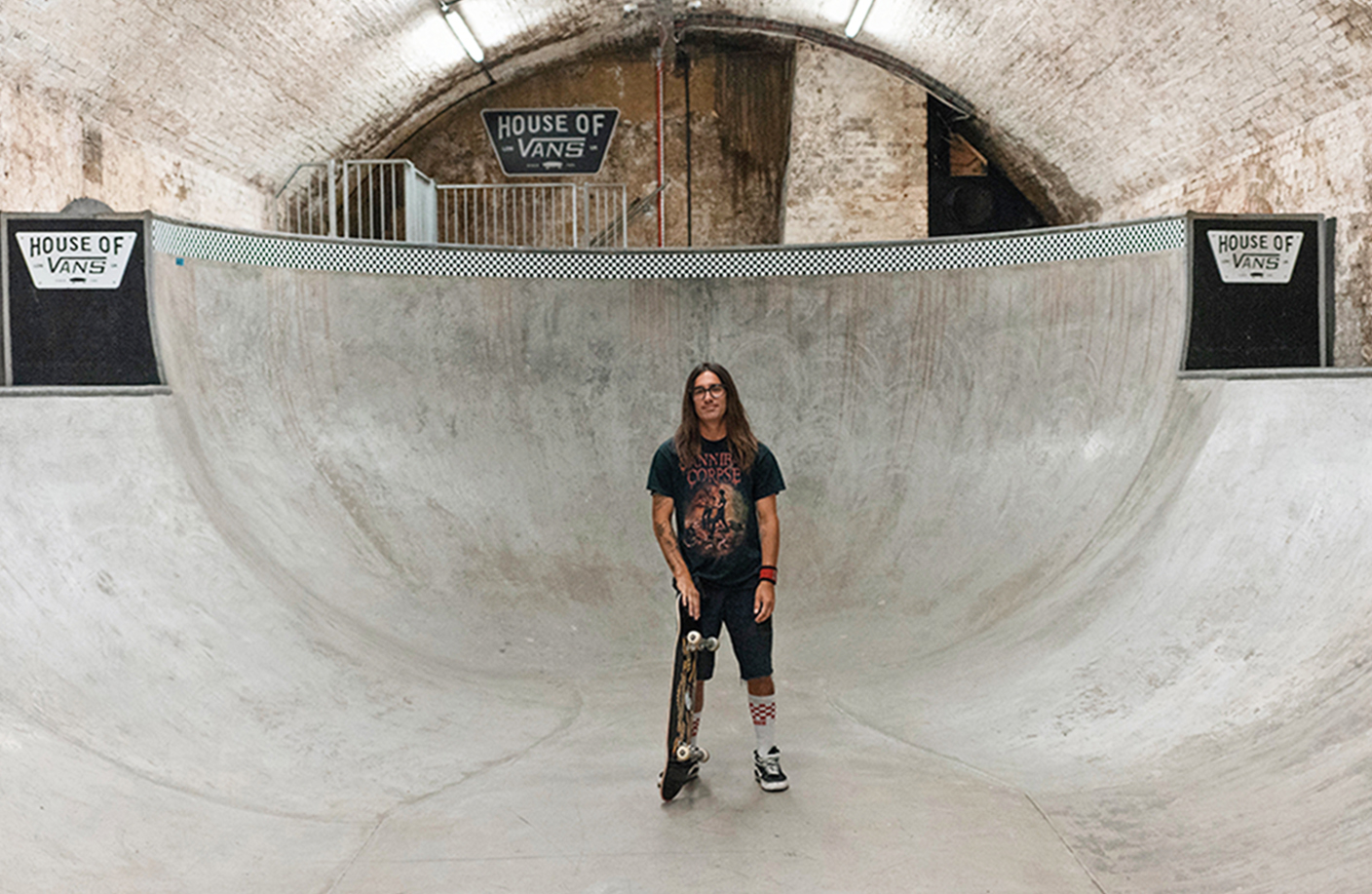 Tony Trujillo is a living legend. He has cemented his place in the skateboarding hall of fame thanks to an uncompromising style featuring a mastery of both street and transition. But even beyond that, his life has been deeply intertwined with the history of skate culture over the past two decades.

This is someone who filmed John Cardiel grind the Golden Rail, who plays in a band with Thrasher’s Jake Phelps and who had DIY innovator Mark Hubbard as his best man.

A human jukebox of skate stories, Tony’s in town to launch his new signature shoe – the Vans TNT Advanced Prototype, designed to reflect his tenacious attitude – although he is constantly going off on tangents, talking just as much about the future and how it intersects with his past.

Tony grew up on a farm in Santa Rosa, a small city in northern California, surrounded by open land. “We had 10 acres with horses and chickens and all sorts of shit. [I’d be] climbing on all the fences, the roofs of the barn… and then were the ramps.”

Tony first started skating at age six, when he’d spot his neighbour an acre away and shout, “Do you wanna play?” Making the most of an independent life, he’d bomb the biggest hills in sight, even squeezing in some practice time on the mile-long journey to the bus stop every morning.

“My dad worked the night shift, my mom worked early mornings, then my sister would leave home before me – because she was five years older and went to a different school. So I was left alone.” 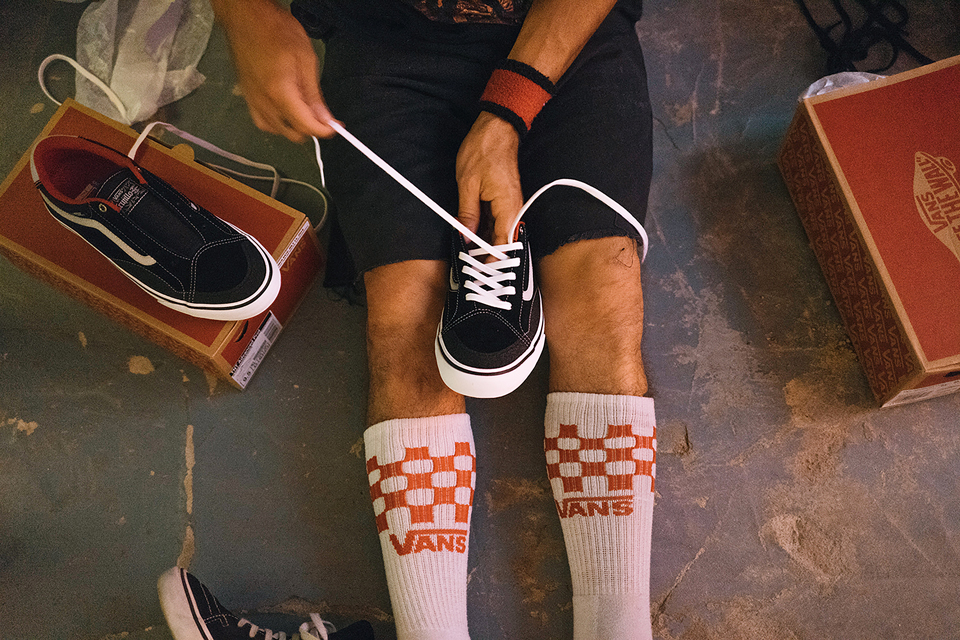 Around age 12, he started skating amateur comps around northern California. None of the big companies were watching, but Tony managed to get picked up by a local skate shop anyway.

One Halloween, he found himself packed up in a van on a 100-mile drive to a skate jam in Sacramento. What happened next is practically skate folklore.

Seeing pro skater Bob Burnquist in the crowd, Tony grabbed his ‘sponsor me’ tape from the van and asked the Brazilian to take a look. He did, and was so impressed that he put Tony in contact with Anti-Hero, who would go on to become his first major sponsor at age 14. Two years later, Tony went pro.

But in reality, hardly anything changed. “‘Pro skater’ now is not what ‘pro skater’ was then,” he says with a shake of the head. “I mean, I got a board and stuff. But I still had to work my ass off, I was still in school.” 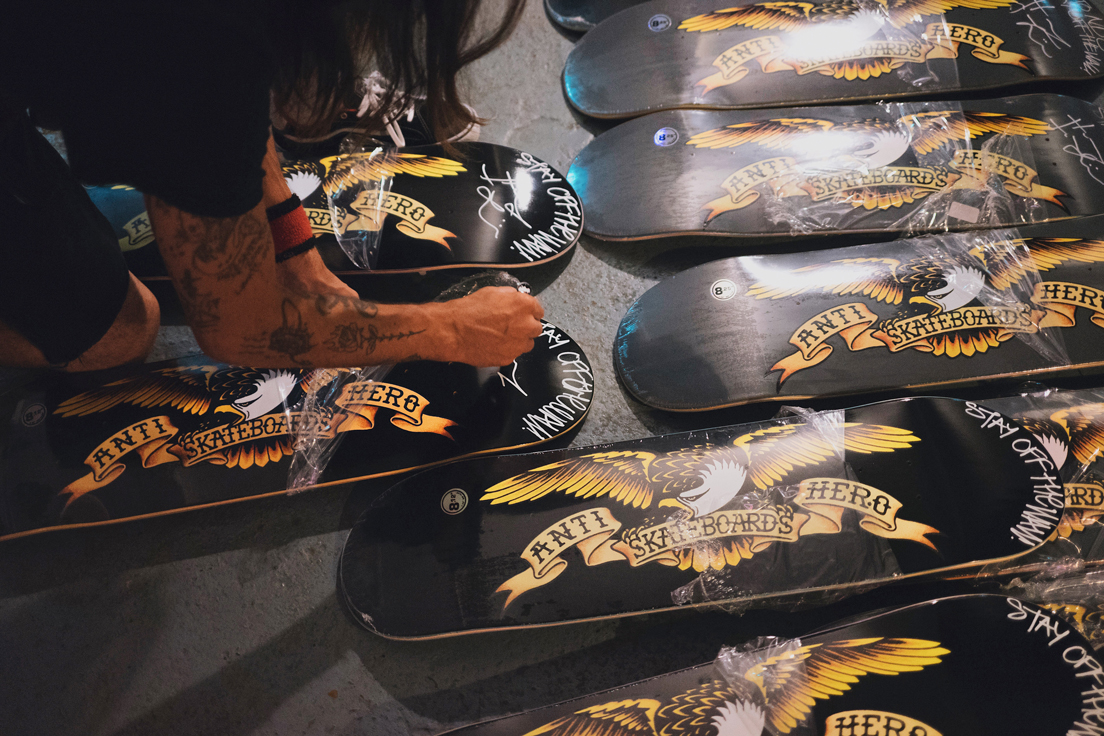 When he was crowned Thrasher’s skater of the year at the age of 22, that feeling lingered – “I was still a stupid kid, just like, ‘Woo, let’s party!’” – but now that he looks back on these achievements, they mean a lot.

In Tony’s personal life, the crowning moment was probably meeting his bandmate, best friend and now wife, Ashley. He had been in California on a skate trip when a friend lined up a blind date for himself. With nothing else to do, Tony decided to tag along at the last minute.

“I knocked on the door and she thought I was the blind date. [I was like,] ‘No babe, he’s back there.’” He laughs. “We did a bunch of bad shit that night, drug-wise…

“She ended up getting a big thing of shaving cream and slapping me in the face and then I hated her. We just had that kind of tension that eventually brought us together.” 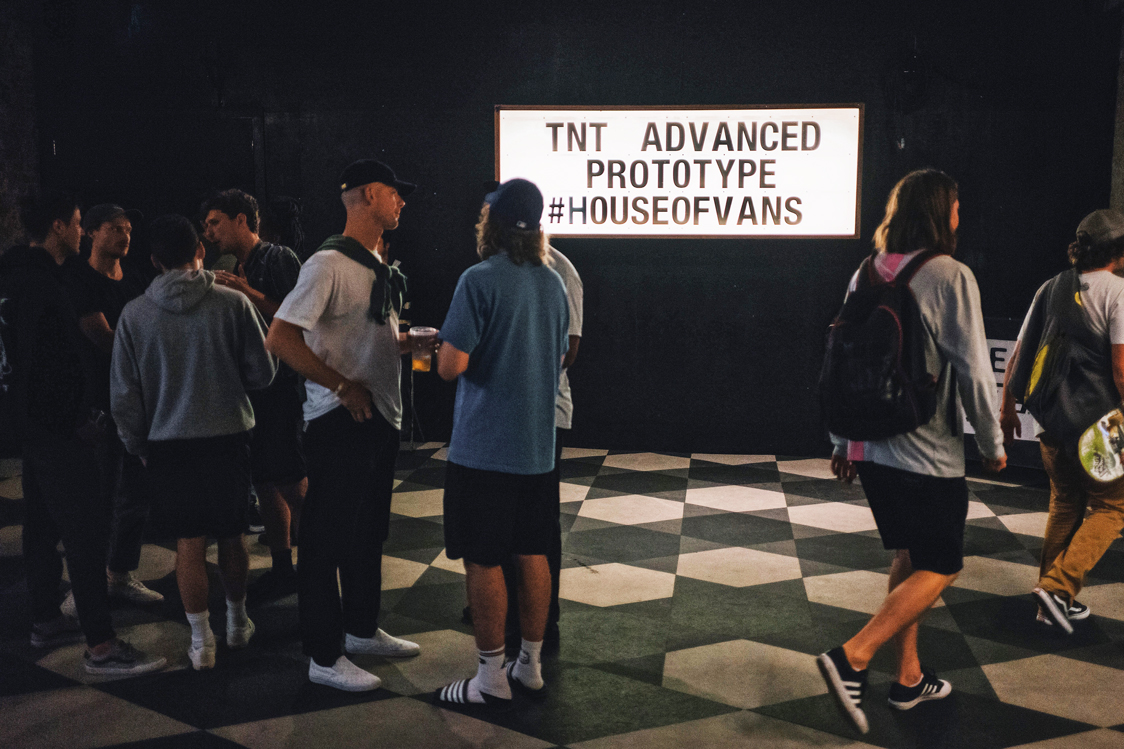 Today Ashley and Tony have two kids and are settling into a life of domestic bliss, having recently moved from San Francisco back to Santa Rosa so that the kids could play outside more.

The hardest part, he says, is juggling work commitments and family life, with back-to-back injuries making it a challenge to keep skating professionally. “The industry has changed and it’s so much more demanding,” he says. “There are so many more skaters now who can fill the void if you can’t.”

Over the last eight years, Tony explains, skate culture has become much more mainstream. There have been breakthroughs in popularity before, he goes on, but whereas those moments came and went, now it seems to be sticking. And by the time skateboarding debuts in the 2020 Olympics, there’ll be no going back. 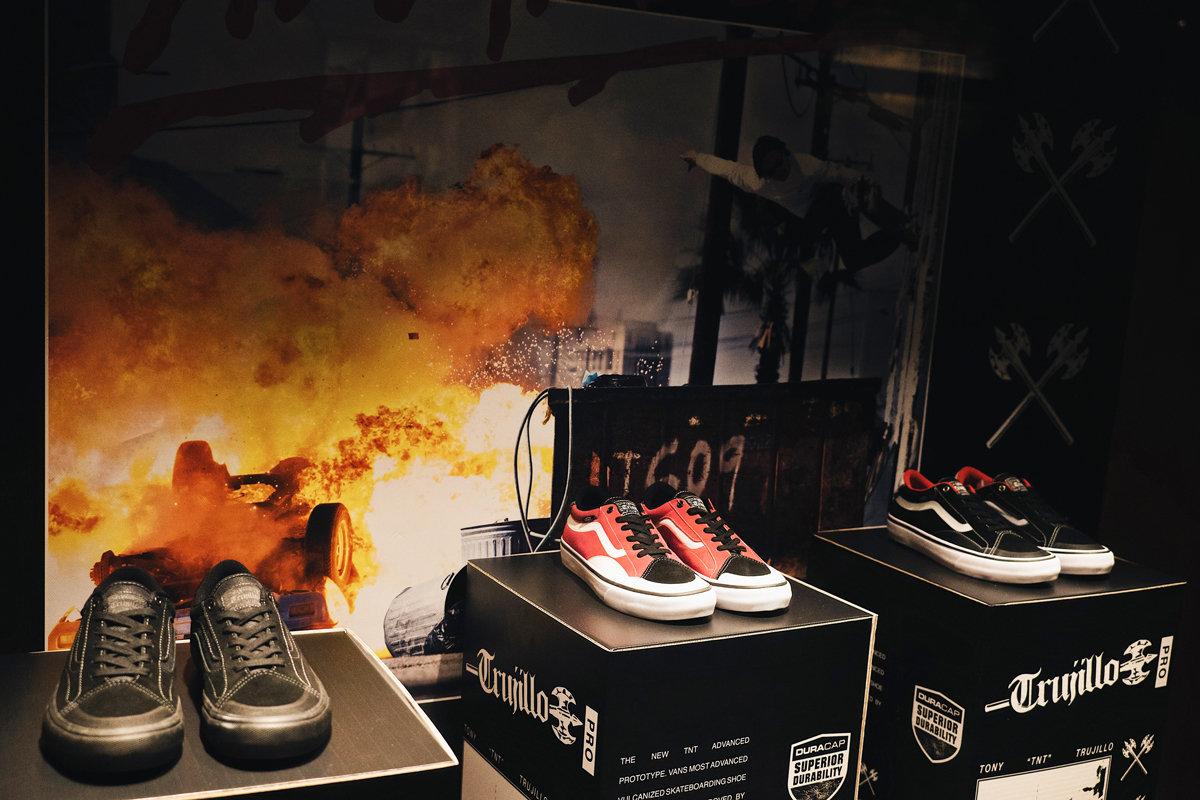 But in terms of outsiders “trying to invade our fucking scene to try and sell shit through our way of life”, he adds, that’s probably never going to go away either. The allure of skate culture is just too powerful.

“It’s ridiculous the money being spent,” he says. “Kids these days rock Gucci bags… The priorities have changed, for sure. I never worried about the monetary shit. [When you’re young], your priorities are basic day-to-day living. Just spend money on what you need – like food, gas or a bus ticket – and then put the rest away.

“It starts building up and one day you can buy something big. But if you can skate for free, travel and promote skateboarding – that’s what’s important. Not what kind of shit you’re carrying.”

The Vans TNT Advanced Prototype are available worldwide from 14 July.

Linkedin
RELATED ARTICLES
OTHER ARTICLES
At his West Bank restaurant, Fadi Kattan established himself as the voice of modern Palestinian cuisine. Now, he’s bringing his innovative, bold flavours to the UK’s capital.
Photographer Becky Tyrell went down to the fading banger and stock raceway to meet a community desperate to keep it alive.
After fleeing the war in Ukraine, people are finding it impossible to secure affordable and decent housing in the UK.
A new podcast is opening up the conversation between trans women and trans amorous men in the hope of building coalitions.
Following the release of his debut single, Deyaz talks battling addiction, dealing with his struggles through music, and building a budding music career from his living room.
Filmmaker Laura Poitras discusses her new documentary which traces the remarkable life of the artist-activist and the impact of her battle against the US opioid crisis.