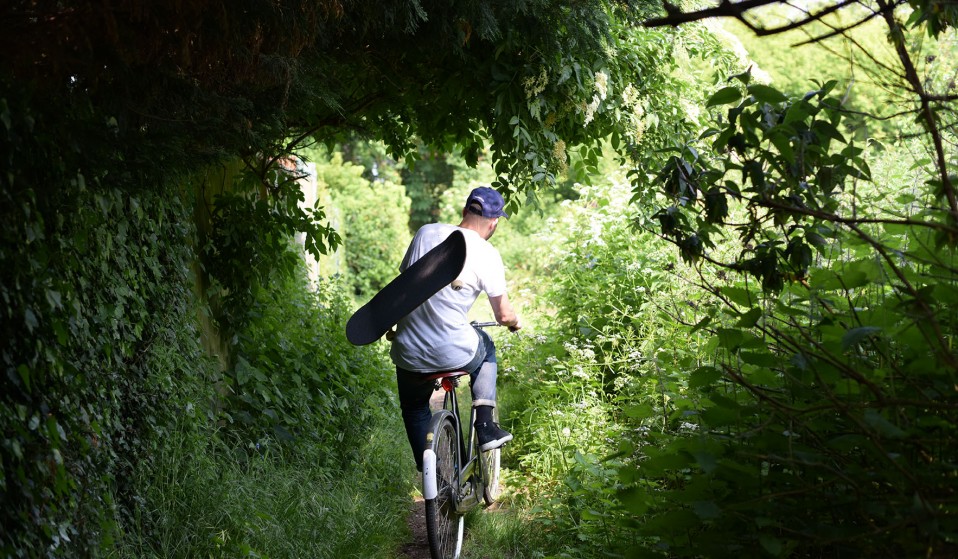 Artist and skateboarder Arran Gregory is interested in the place where urban and rural landscapes clash and collide. His newest work is a natural evolution on a theme.

Arran Gregory is sitting in the shadow of a huge Amur leopard. The beautiful, imposing creature – almost two meters wide, and a meter high, covered in a jigsaw of geometric mirrors – is in fact a scale replica of a large male.

When Arran started sculpting it almost two years ago, there were only 30 left in the wild. Learning that fact from a documentary sparked Arran into a sculpting frenzy which resulted in a family of leopards he eventually exhibited at a show called Hunt in the Truman Brewery, East London, in 2015. 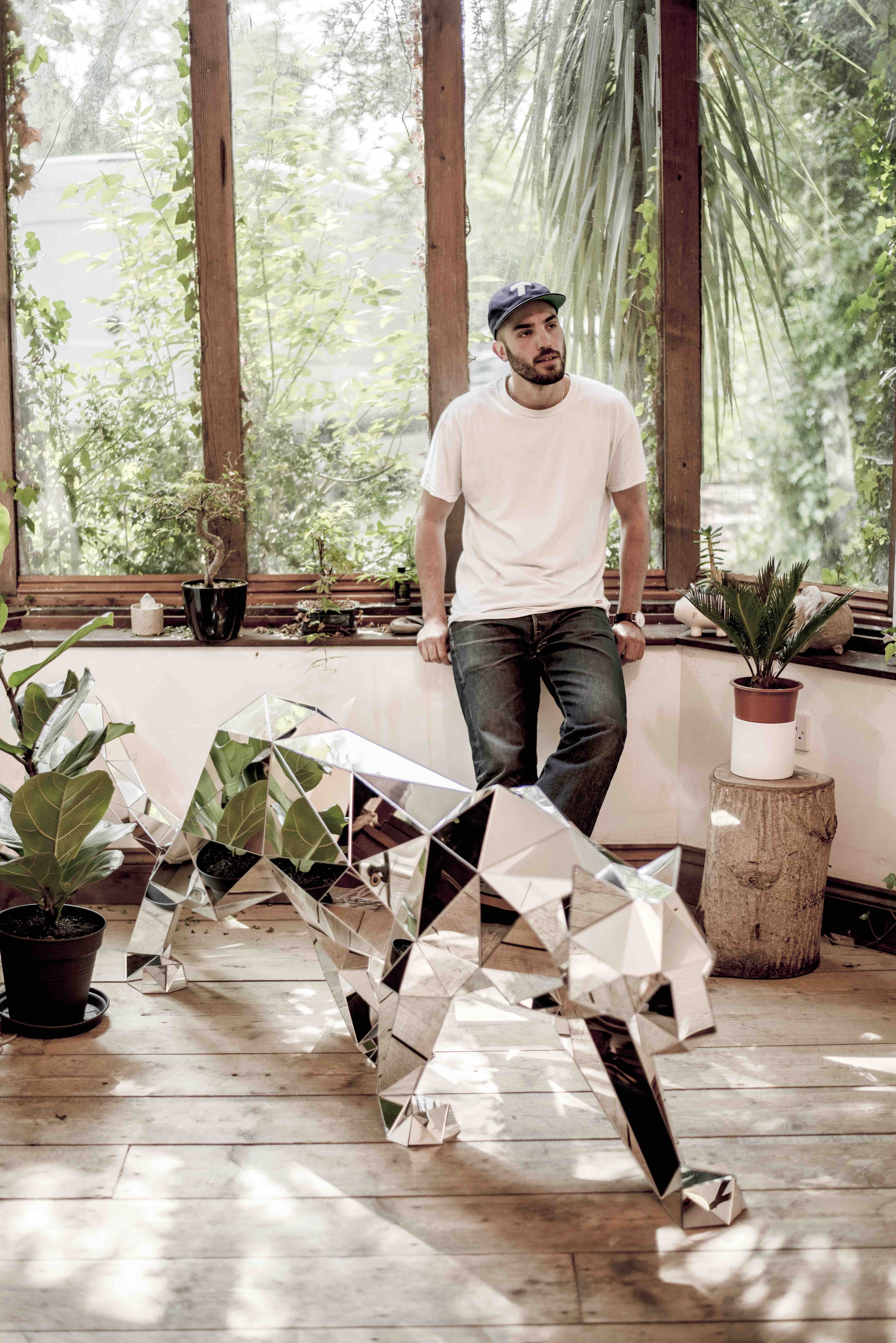 Trained as a graphic designer, Arran had been experimenting with line drawings of wild animals in his final years at Chelsea Art College, but an obsession with physicality led him to bring them to life. “I taught myself to sculpt and how to work with all these new materials and it was a really fun process,” says Arran, sat in his idyllic studio on the rural outskirts of London. “I get a sense of satisfaction from physically creating something. Drawing got to the stage where it felt a bit samey and static.” 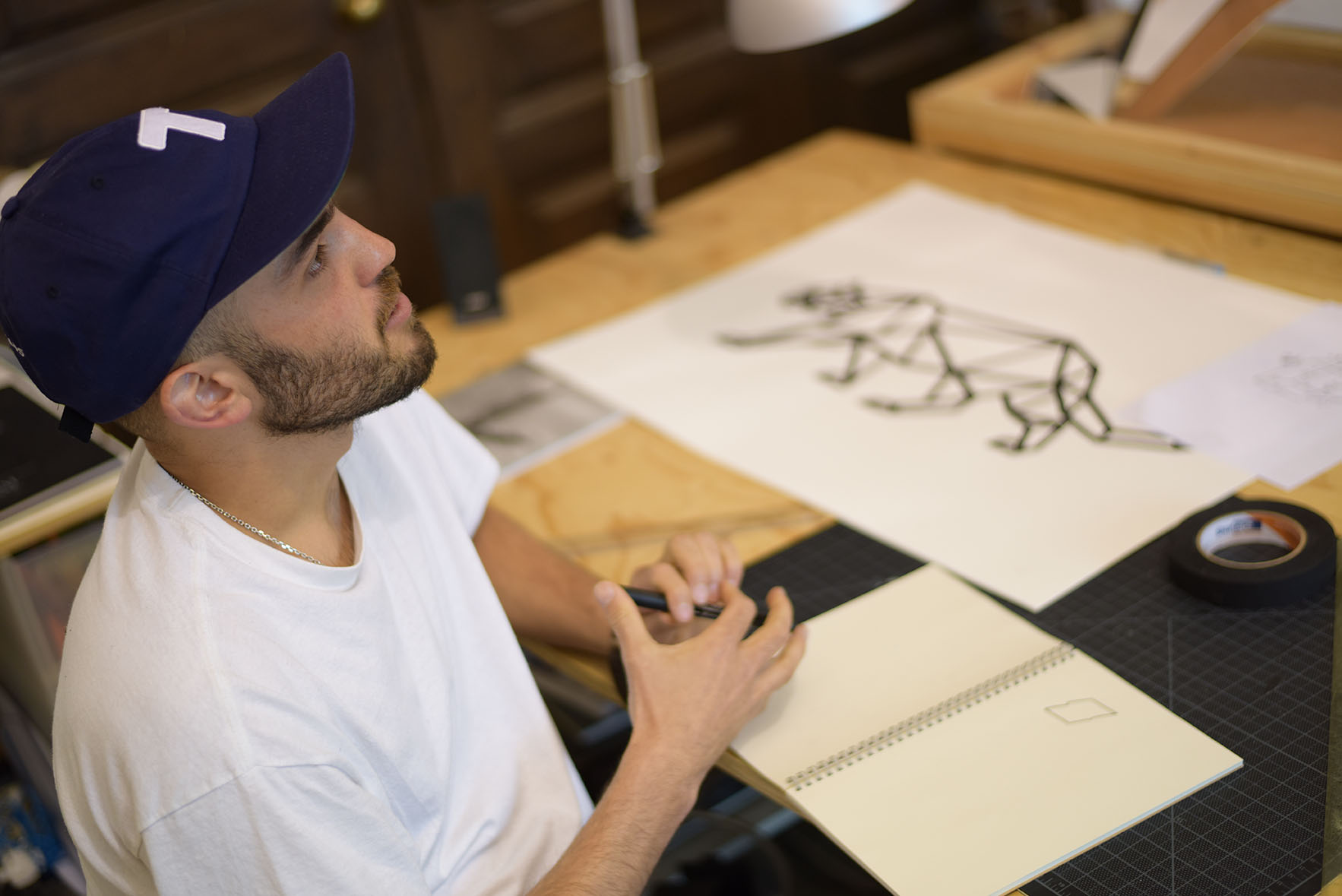 Arran credits an early love of skateboarding – he got hooked after finding a board in a garage aged nine – with instilling a fascination with three dimensions. “Through skateboarding, you’re subjected to a DIY visual culture, where people make their own flyers, videos, and t-shirts from a young age,” he says.

“It’s something that I applied to the way I work. If I have an idea that excites me, I just create it. I’ve also got this obsession with geometry, angles, lines, reduction and form. A lot of that comes from the way you perceive architecture and space as a skateboarder. You’re always looking at how to reinterpret your environment for play.

But at the same time there’s a lot of discipline involved in both my practice as a sculptor and in skateboarding, actually. It’s not just going out and mucking around the whole time.” Skateboarding may draw him into the city, but Arran’s art practice always circles him back to nature. When he made his first mirrored animal he was thinking about camouflage.

“In a forest at night there’s a whole world that’s invisible,” he says. “There are so many invisible layers to nature that we don’t quite see. So I wanted to create something that would just blend into its environment.” And when he made the family of leopards for the Hunt show, he wanted to raise awareness about their conservation.

So how does he consolidate his two inspirations – urban landscapes and rural ones – in his mind? “I just feel like I’m reacting to the world that I live in,” he says. “We’re living in this super evolved age; we’re animals and we’re a part of nature but we’re living in cities and creating worlds that are very human and very different… I guess I’m just comparing the two and looking at the differences.” 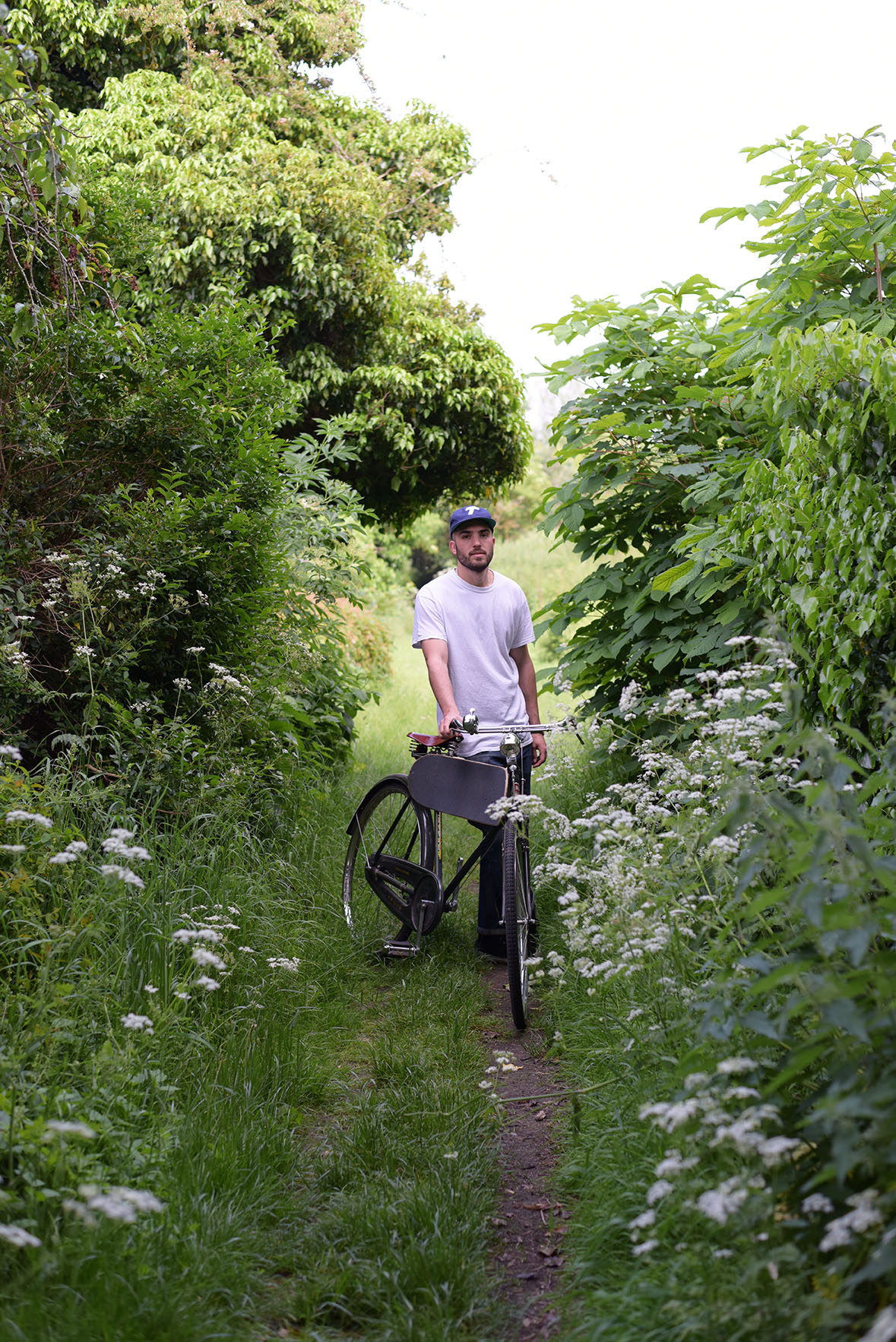 Arran sees all of his work as an evolution on a theme – he’s talked about even creating moving kinetic sculptures in the future – and his newest project is a natural step in that direction; another leopard, this time painted white and installed in front of a floating glossy black cube.

“The glossy black cube is supposed to represent technology as an object,” says Arran. “We’re always staring at our phones and computer screens, and when you switch them off, they’re just mirrored surfaces. So I want the leopard to be intrigued by this object and absorbed into its reflective surface. You know when you’re on the internet and you’re like, ‘Oh, shit, I’ve just been watching cats spin around for 20 minutes.’ And you don’t even realise it. It’s this whole thing of, ‘Are you in control of it, or is it in control of you?’”

This article first appeared in Lines Through The City, a newspaper – featuring stories of cyclists and skateboarders – made in collaboration with Levi’s.  Enjoyed this article?

Linkedin
RELATED ARTICLES
OTHER ARTICLES
Ahead of the policing bill reaching its final stages in the Lords, protestors came together to rally against the legislation.
Photographer Yan Morvan revisits a radical moment in history, which saw the emergence of a fiercely-rebellious spirit among the UK‘s youth.
Jermain Cikic reflects on his experience of visiting the island of Samos, Greece, in the summer of 2021.
The New York MC reflects on his experience with Trumpian US immigration policy, and how it impacted his career.
Those set to be impacted by the governments ’undemocratic’ bill explain why it risks silencing them.
Hundreds gathered together to protest the policing bill by making as much of a racket as possible.