Thanks to the non-profit Skateistan, young women can find an escape from the realities and stresses of growing up in extremely difficult situations.

Thanks to the non-profit Skateistan, young women can find an escape from the realities and stresses of growing up in extremely difficult situations.

Thanks to the non-profit organisation Skateistan, youth find an escape from the realities and stresses of growing up in extremely difficult settings. In the countries that they work in, Afghanistan, Cambodia, and South Africa, the streets aren’t a safe place for children.

But at their Skate Schools (in Kabul, Mazar-e-Sharif, Phnom Penh and Johannesburg), over 1600 young people each week are provided with a safe space to skateboard, and learn before and after school, and half of those youth are girls.

“When I saw the Skate School I fell in love with it,” exclaims a female student in Mazar-e-Sharif. Skateistan’s Skate Schools are welcoming safe spaces for kids in difficult circumstances or conflict situations. And they’re not just inclusive, supportive places; they are fun. Since 2009, Skateistan has been showing the positive impact made when girls are given access to learning through their programmes.

With 14 girls-only Skate and Create sessions hosted across all of their locations each week, Skateistan is providing the necessary environment for girls to play sport and get educated. It’s their most accessible programme and their biggest worldwide, with students spending an hour in the classroom followed by an hour in the skatepark.

The girls skate sessions are run predominantly by female staff, in Afghanistan it’s only female staff, and the classes take place indoors. “Skateistan is like my second home. I feel that way because at Skateistan I can express my skills and I can do those things that I can not do outside”, explains a female student in Kabul. 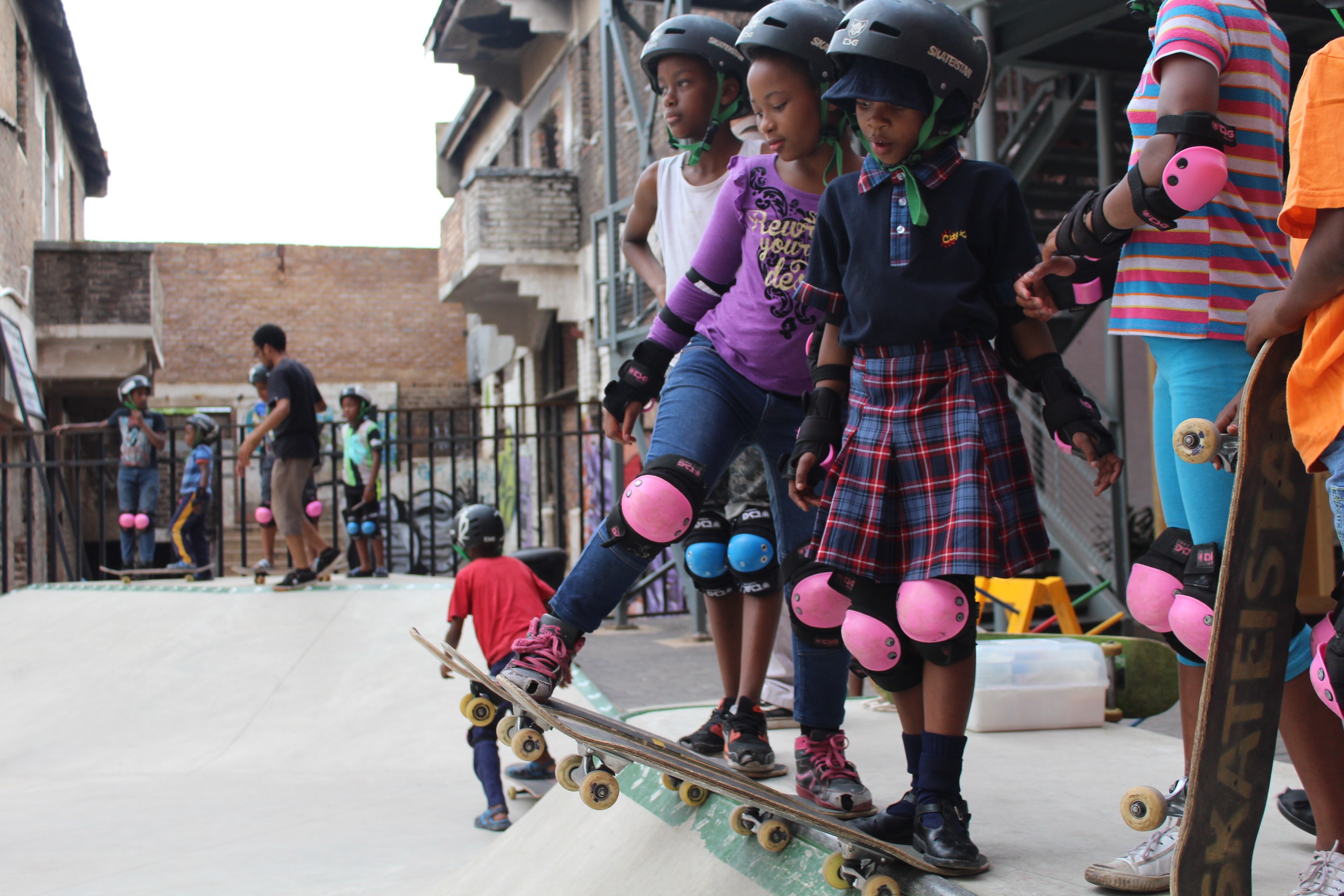 Riding bikes, flying kites and playing football are often seen as “boys activities” in Afghanistan, but skateboarding is culturally acceptable for girls now too. In South Africa and Cambodia, programmes are mixed, with girls-only sessions helping to increase participation levels and encourage young women who are less confident to skate.

Out of the skatepark, these young people have the chance to explore alternative topics that aren’t usually taught at public school. The subjects teach valuable life skills, that they can take back to their everyday lives and communities.

“My favourite lesson was Child Rights and Immigration”, says a Skate and Create student in Cambodia. “I like kids so I have to know about Child Rights and the right way to protect them from bad situations or bad people.”

Skateistan programmes are for all, regardless of socioeconomic background or abilities, and they run programmes for youth living with disabilities, too. At the Skate School all kids experience trust, acceptance and social inclusion. “It’s a large and safe place. I trust people here”, says a female student in Afghanistan.

Most recently Skateistan opened a new Skate School in Johannesburg with the underlying mission of addressing the gender gap. “South Africa is a patriarchal society and as such, women and girls find themselves in positions where they are often belittled or treated as less because of their gender”, explains Mbali, who is training to be the General Manager of Skateistan South Africa.

“There are few spaces for young girls to just be girls and be OK with it, without having to worry about their makeup and their hair and their looks, without the fear of rejection from boys, or being seen as inferior.”

A major concern in the local community is safety on the streets for the children living there, and until now they’ve had few places to play after school. “We worry about our kids safety in general. But what [Skateistan] does is take these kids out of the streets”, says a mother in Johannesburg.

“By the time they come home they are tired, they just want to eat supper and go to sleep. I’m very happy.”

Skateistan believes girls have an equal right to be safe. From December 5th, Skateistan is asking the public to Give Her Five by donating $5 in a bid to raise $100,000 by December 31st 2016. A single donation will help provide these safe spaces for even more girls in countries where it’s needed.

Linkedin
RELATED ARTICLES
OTHER ARTICLES
With the singer’s tour in full swing, we sat down the musical production company who made the electrifying show possible.
SOAS Detainee Support detail the appalling conditions they witnessed at the dangerously overcrowded immigration centre in Kent.
After voting to strike across England, prison teachers explain why they’ve been pushed to a breaking point.
The photographer reflects on a decade which saw the rise of MTV and the flourishing of new genres.
A new photo series documents tribes preserving the environment through simple, sustainable practices in central Asia.
We catch up with the singer in her London studio to connect the dots between music, painting and her relationship with the city.