Outdoor / Skate / What does half a century of Vans mean for skaters? 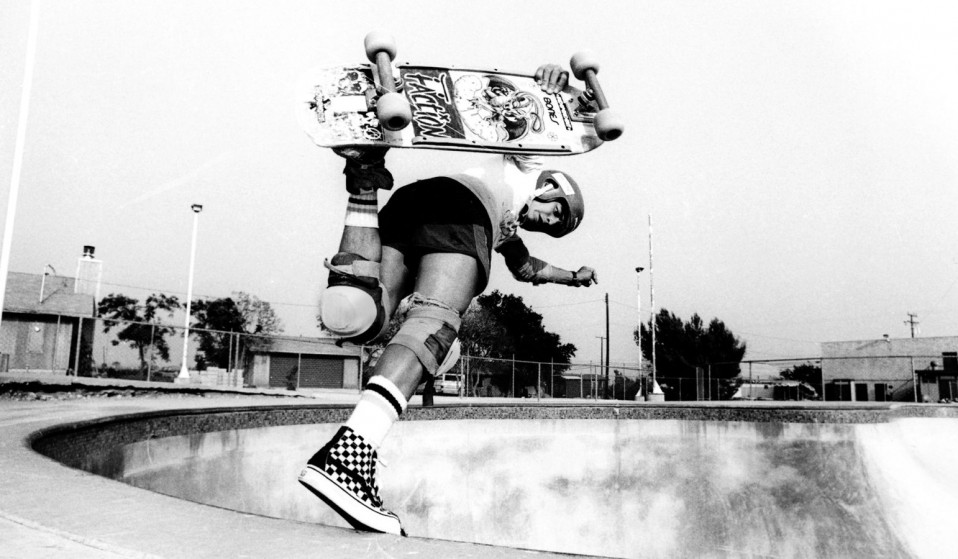 Vans 50th anniversary is as about getting old, not just the vibrant history of skate.

As Vans celebrate half a century of doing their thing, Huck meets skate guru Tony Alva and son of a Vans co-founder Steve Van Doren to look back at the last 50 years, and to the future.

Tony Alva is skating’s guru. The 58-year-old is one of the original Zephyr skaters and skates to this day, still wearing his Vans, part of the slapdash uniform the Dogtown skaters wore to competitions.

Alva’s been sober for nearly 10 years now. He’s dreadlocked, and has a focused calm. He seems really, really wise – he gives me instructions on how skaters should deal with getting older (he cross-trains with surfing, and watches his diet). “You gotta learn how to stay physically, emotionally, and mentally fit”, he explains, still sweaty after a House of Vans skate session.

Alva’s aged incredibly well. We sit down to talk amidst the celebration of Vans’ 50th birthday, a nostalgia-filled chaotic weekend of events and autograph signings, a reminder of the younger days, and a celebration of the next generation still progressing the sport.

The notion of the “eternally youthful skateboarder” is still alive and kicking, but looking around over the weekend it’s hard to avoid asking on the half-century anniversary: what does it mean for skateboarding, and skaters, to get older?

The Van Doren Rubber Company opened up their first store in Anaheim, California, in 1966. Two things were pretty special about the shoes they were selling: the waffle-sole and the customisable fabric – both of which were made possible because Vans were cooked up in their own factory.

The brand would soon become emblematic of the early years of pool skating – by 1976, Tony Alva and Stacy Peralta had designed the Vans Era, with a padded collar. It was perfect for skating.

“The Z-Boys were like a fraternity of dysfunctional kids that came together, more like a family then a gang,” recalls Alva, looking down at a fresh scab on his forearm as he thinks back to his time with these notorious surfers borders. “A lot of people compared us to a clique, which is like a Mexican gang or hockey team or whatever, and the aggression was there I admit, but that was our family and we bonded through the enthusiasm we had for surfing and skating, and it really gave us a solid group of guys we could feel safe around.”

What Alva is saying nails the spirit of skating – a counterculture grounded in a shared energy and identity. The photos of the Dogtown days have taken on a new significance with Vans’ 50th. “The photos are timeless. Even though you look at them and say ‘oh that’s retro’ or ‘he was really young there’ – for me it’s cool, I don’t trip on time”, he says.

It’s hard not to admire Alva’s approach to age, but at the same time, the photos aren’t exactly timeless; things have changed. Skating has changed, and Vans has changed. Example: from the California punk scene of the late 70’s (Henry Rollins played his first Black Flag gig in a pair of Vans), to Warped Tour, which started in 1996 – sure, there’s a spirit and continuity, but things also became more organised, less impulsive.

With all the raw energy of the early days, I ask Alva how the Z-Boys were able to stay focussed. “We smoked a lot of weed!” he responds, breaking out in a fit of laughter that almost pulls him out his chair. “At the time that was our spiritual experience. We were experimenters, experimenting with hallucinogens and smoking a lot of pot. That was a time when it worked for us.” Alva’s not had a joint or a drink for nearly a decade now, “there’s a point when it stops working for you, but back then it worked for us.”

“I don’t regret it, everything we did back then got me here. And I’m still here – a lot of the guys have been in and out of jail, a lot of the guys are dead and gone – Jay Adams, Bob Biniak, Chris Cahill, baby Paul [Cullen], we just lost another guy a month ago, one of our Venice locals. I’m super grateful for the longevity I’ve had. I just try to live my life one day at a time.”

The next day I meet Steve Van Doren, the son of Vans co-founder Paul Van Doren. We’re led to a comfy green room, and bottles of water seem to never stop arriving (two bottles of water and two full glasses turn up within the first five minutes). Van Doren started working for the company when he was 10, and by the time he was 12, his summers were spent on the assembly line with a roller, smoothing out the rubber on the conveyer belt of shoes.

I ask him about working in the factory, and the rubber. “It’s a sweet smell, but it’s just something I grew up around”, he fondly replies. “It was normal to see powder in the air, the heat; the thing that cooks the shoes, the vulcaniser, means that when the shoes come out every hour all the hot air goes to the top of the ceiling in the factory.” 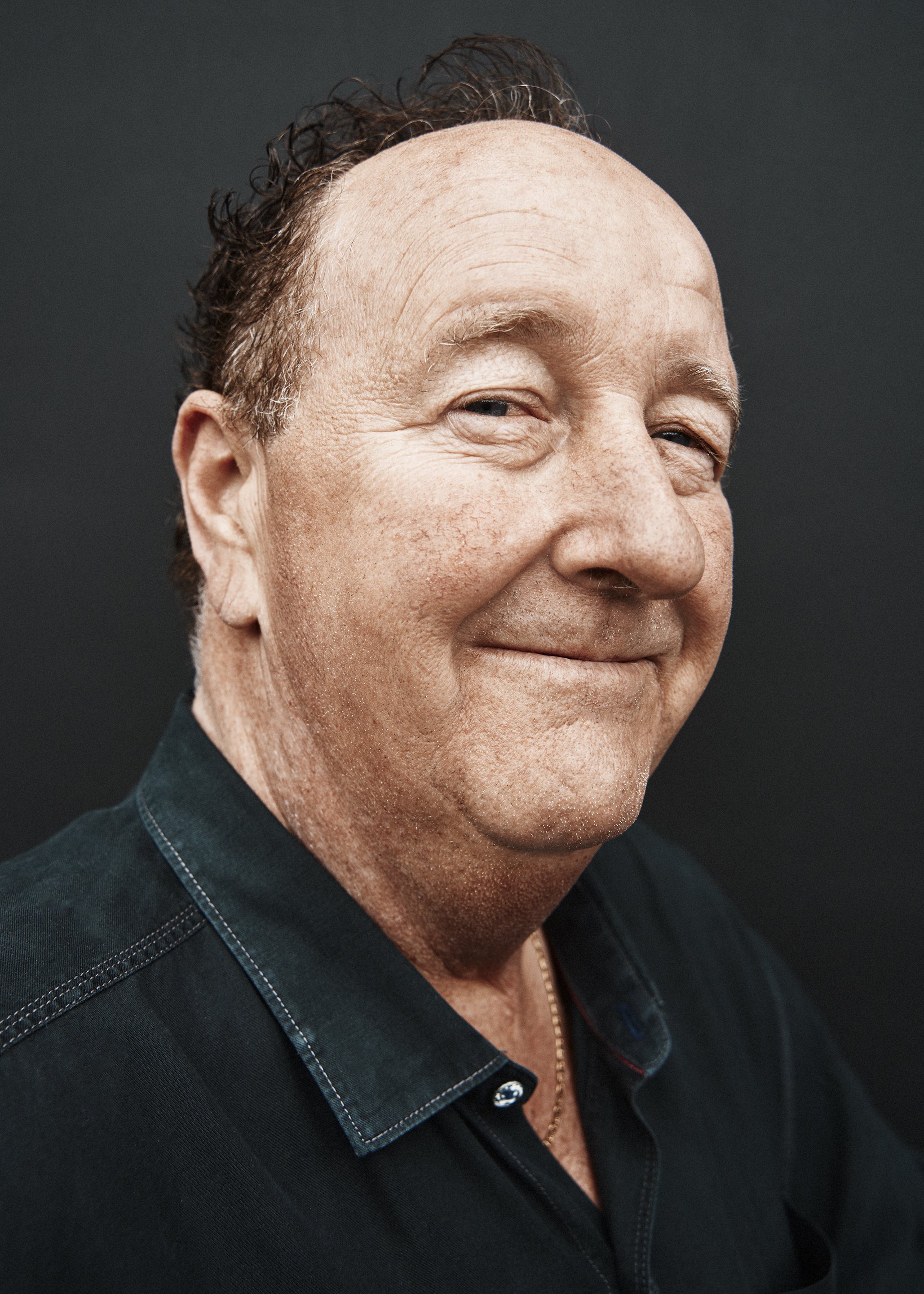 Since then Van Doren has become Vice President of Promotions & Events, traveling with the Vans team and taking on the role of head barbecuer at skate jams and autograph signings worldwide. No longer working in the factory, he tours them across the globe instead. “I just visited the factories in China a month ago”, says Van Doren, “it was great to go in there with the smell – you’ll always know it’s the vulcanizer.”

Conversation turns to what it’s like getting older with the company. “To me I’m just a teenager in a 60-year-old body” he says, smiling. In some ways it’s a sentiment that reflects how the shoes have changed, too.

Technical innovation at Vans takes place mostly inside of the shoe, they’ve been made more comfortable, lighter, and more durable. The outside of the shoes, however, keeps its classic look. The shoes get to stay young while the rest of us age.

“It’s doubtful that Alva, Van Doren, or anyone from Vans would have imagined Vans, or skateboarding boarding for that matter, getting to where it is today; international and nearly institutional. “We’ll find out this August, but I think skateboarding is be going to be in the Olympics in 2020 in Japan,” Van Doren smiles. But even with the Olympics, Van Doren wants to stay true to skating’s roots. “We want to go in the right way, skaters don’t want to go in with uniforms and a bunch of bullshit. We want to do it the right way.”

Linkedin
RELATED ARTICLES
OTHER ARTICLES
Yesterday, rail workers came together to protest poor pay, working conditions and job cuts in their latest round of strikes.
From the chip shops, to the bingo parlors and burlesque dancers, photographer Mike Coles remembers capturing scenes of holidaymakers by the English coast.
The government’s brutal crackdown on NGOs has left victims of rape without anywhere to seek help. And now, as the country plays a key role is Russia’s war, things are only getting worse.
A sharp increase in officers armed with the electrical weapon is resulting in serious injuries and deaths.
With the virus now a global health emergency, we must take steps to fight misinformation and demand a swift UK-wide vaccine roll out, writes Phil Samba.
After rewriting the indie rulebook with her devastating songs about romantic longing, the singer-songwriter is now imagining a future in which the artist is no longer a product.