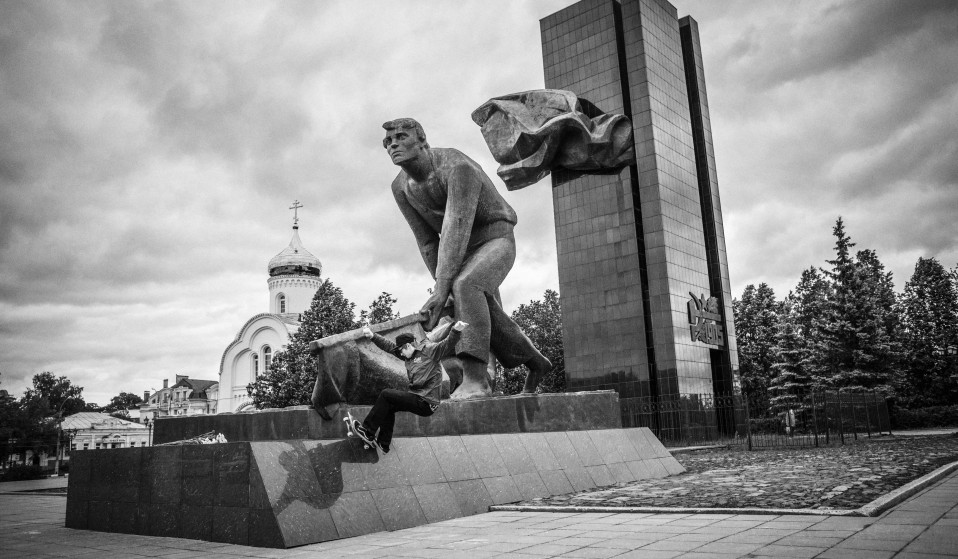 The Cold War may have stifled skateboarding’s early growth, but it birthed a skate culture totally unique from its American roots that is beginning to capture the world’s imagination.

The Cold War may have initially stagnated skateboarding in Russia but, over time, it encouraged Russian skaters to develop a style and aesthetic that is totally unique from its American roots. This is a first-person account of how the contemporary generation
is beginning to capture the world’s imagination.

Russian skateboarding sounds like an oxymoron. It’s hard to imagine a culture that started in California translating to the harsh winter landscapes of Eastern Europe, but our skateboarding has been shaped by its own history, heroes and milestones.

As I write this, I’m midway through a tour of the Golden Ring – a string of cities northeast of Moscow – with skaters Dima Rodionov, Philipp Karel, Gosha Konyshev, and photographer Alexey Lapin. The scenery resembles postcard Russia – all wooden houses and Orthodox churches – but passing through it all brings to mind skateboarding’s rocky start in this country. 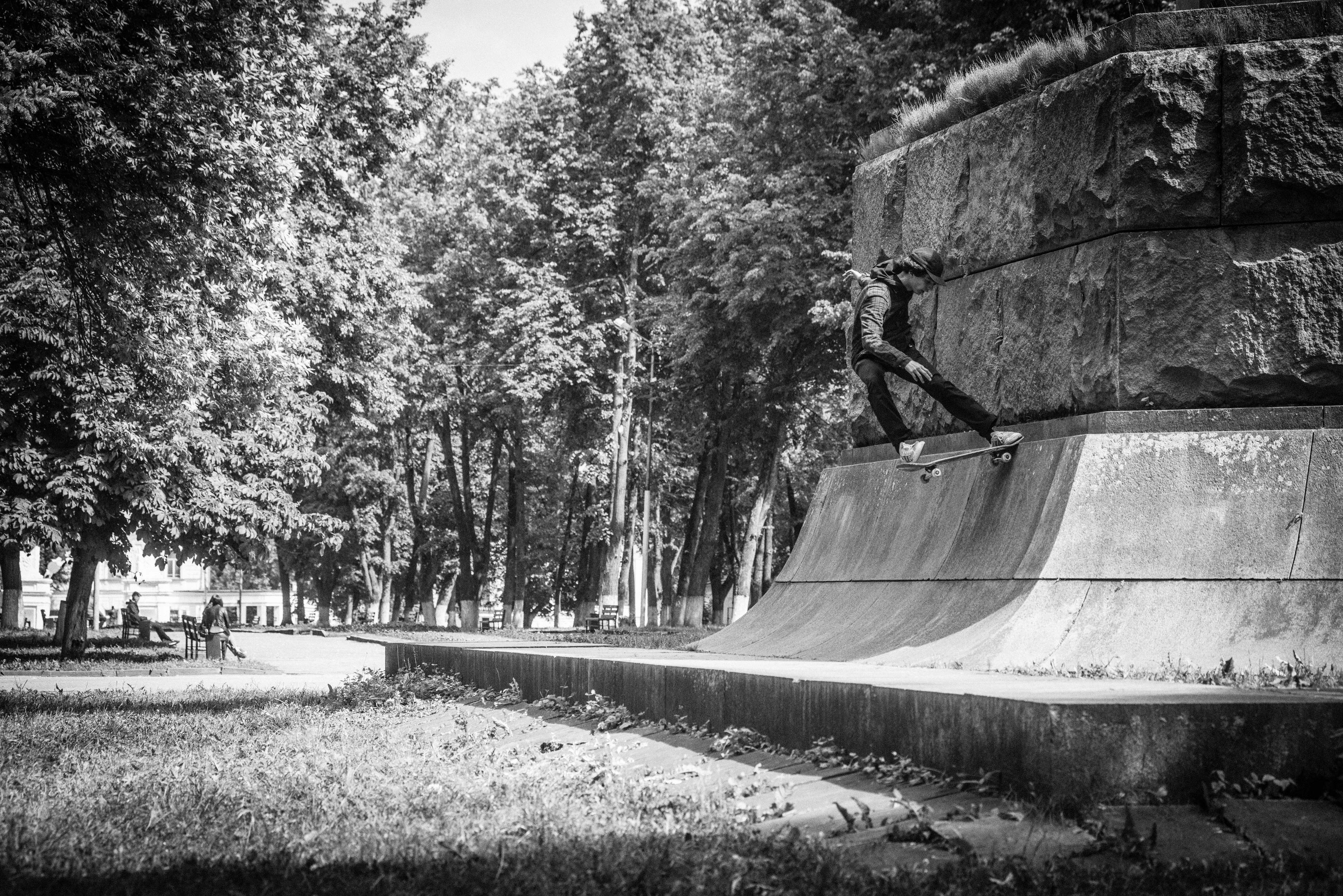 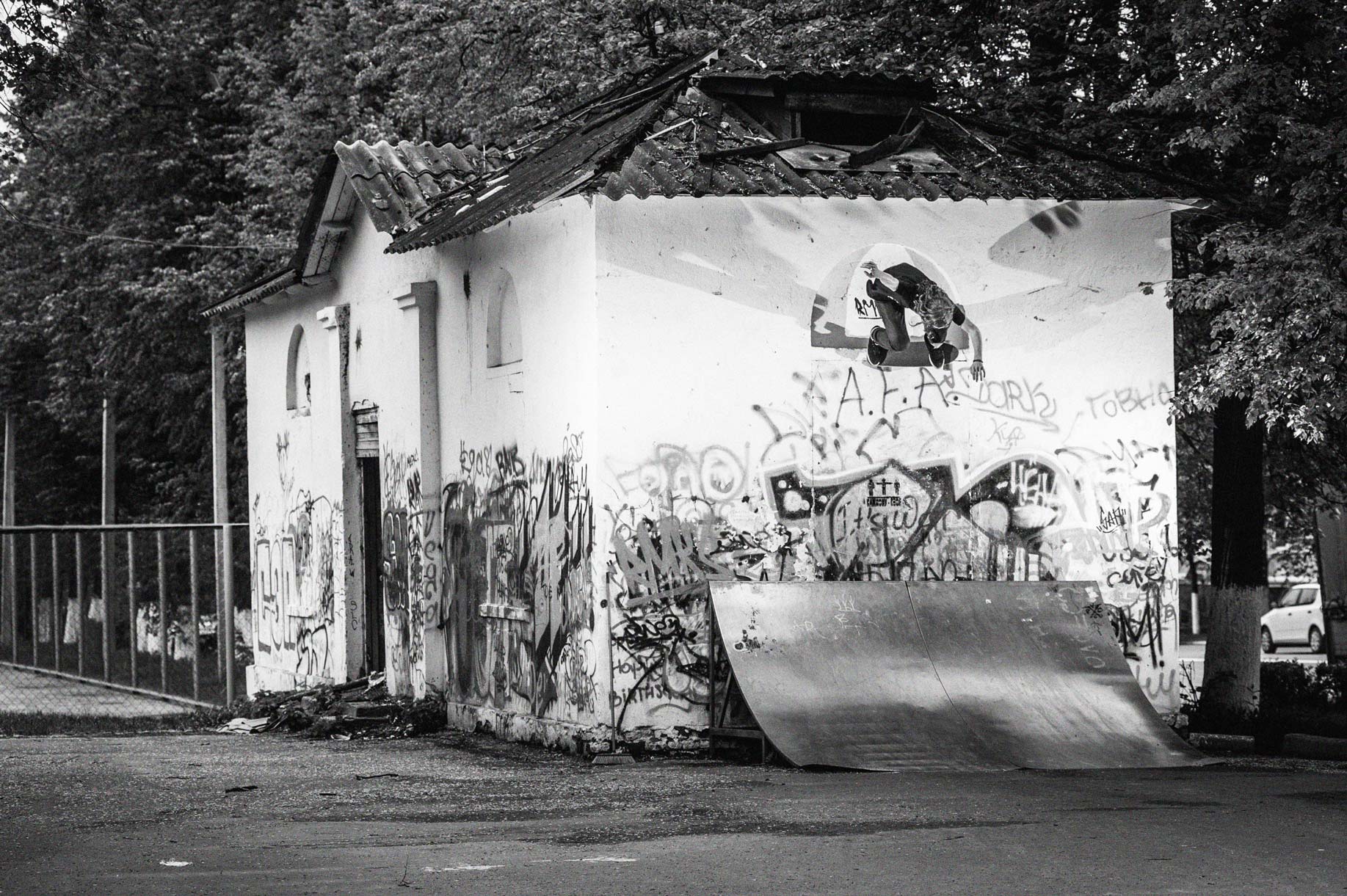 During the ’70s and ’80s, Russian military factories began producing everyday goods like skateboards – ones reminiscent of the first American boards from the ’60s. The Soviet version had a flat shape, with short noses and tails, as well as rubber wheels. Those boards were okay for slaloms or cruising, but it wasn’t possible to use them for modern street skating. Basically, the Soviet Union was 20 years behind the rest of the skate world.

But as Russia emerged from the ashes of the USSR in the early ’90s, a new economic and political model allowed people to buy imported goods. Through a combination of Russians traveling abroad and westerners working in Moscow – Anthony Van Engelen worked in a bar there in the ’90s – the skate community began to acquire its first proper decks, magazines and videos. 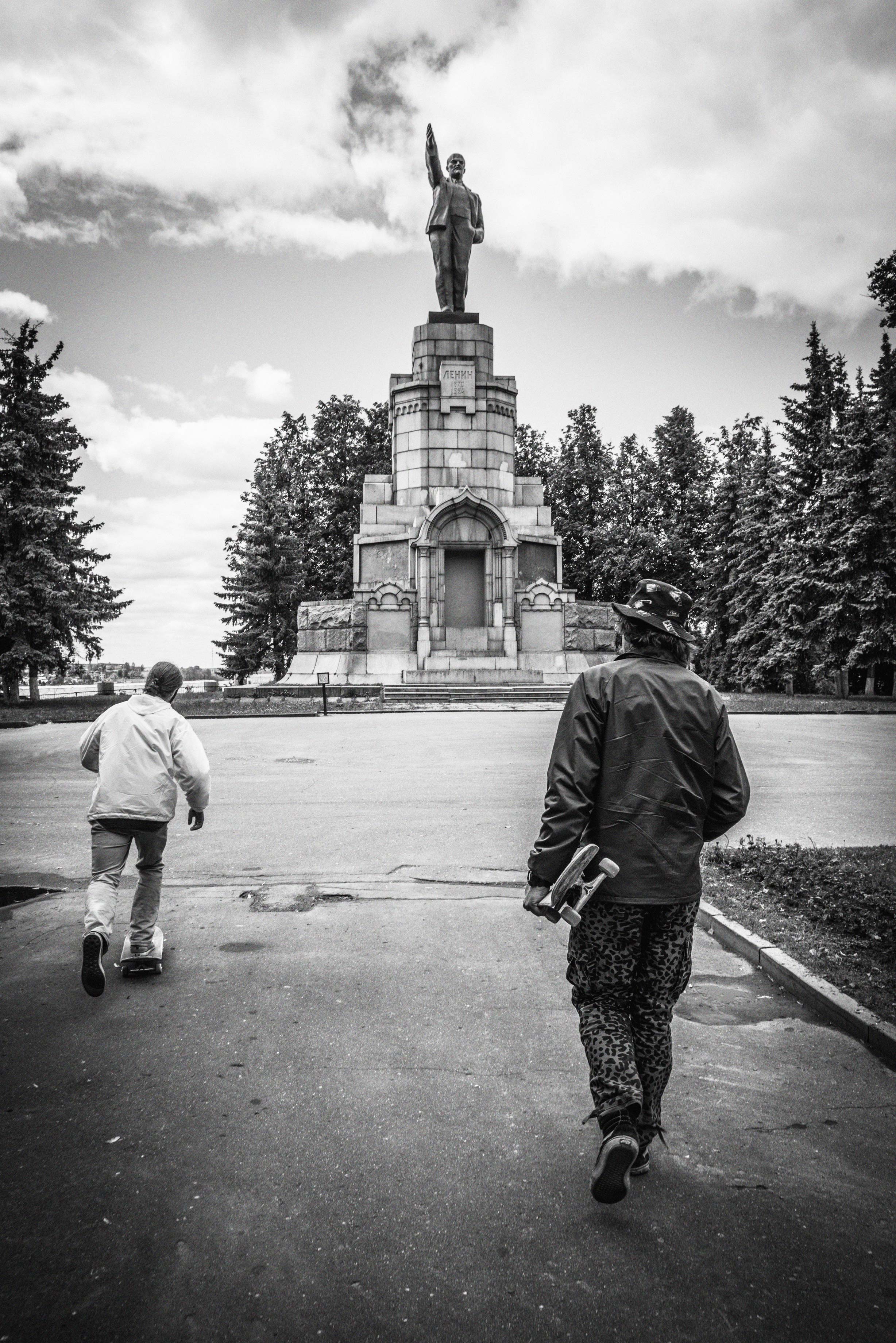 “One of my biggest skate-related memories is Tony Hawk’s Pro Skater video game,” says Dima Rodionov. “That game got me sparked. I started going to skate spots to watch. Later, my friend bought a skateboard from the market. We shared it but, because we lived far away from each other, we had to skate at weird times. I remember us skating at 7am because we thought people would snub us for riding a board.”

In the late ’90s, a proper skate community developed, drawing in filmmakers, photographers and even team managers. By the onset of the new millennium, Russia got its first skate shops and proper skate parks. Although the gear proved to be expensive at first, people at least had the option to buy it. 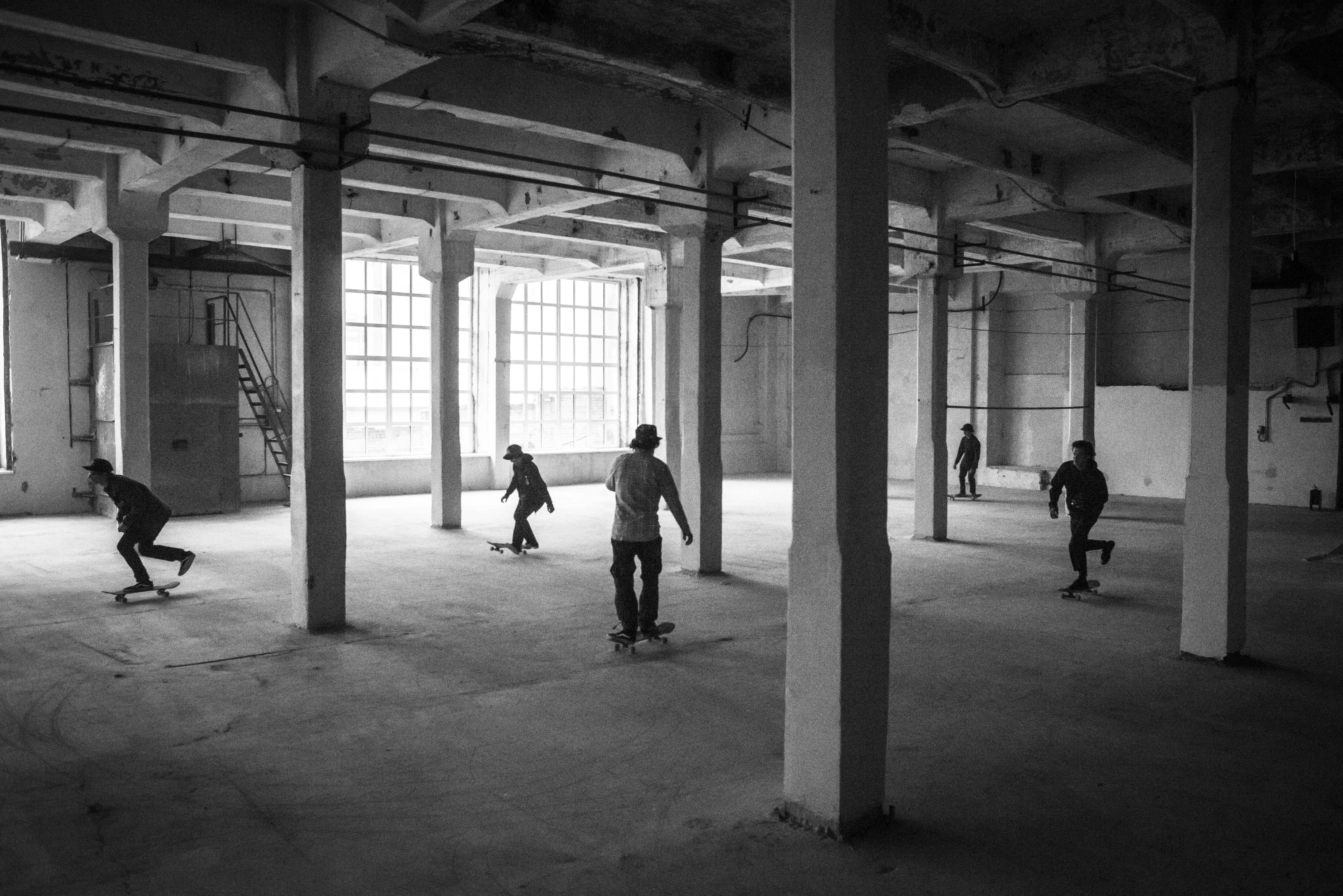 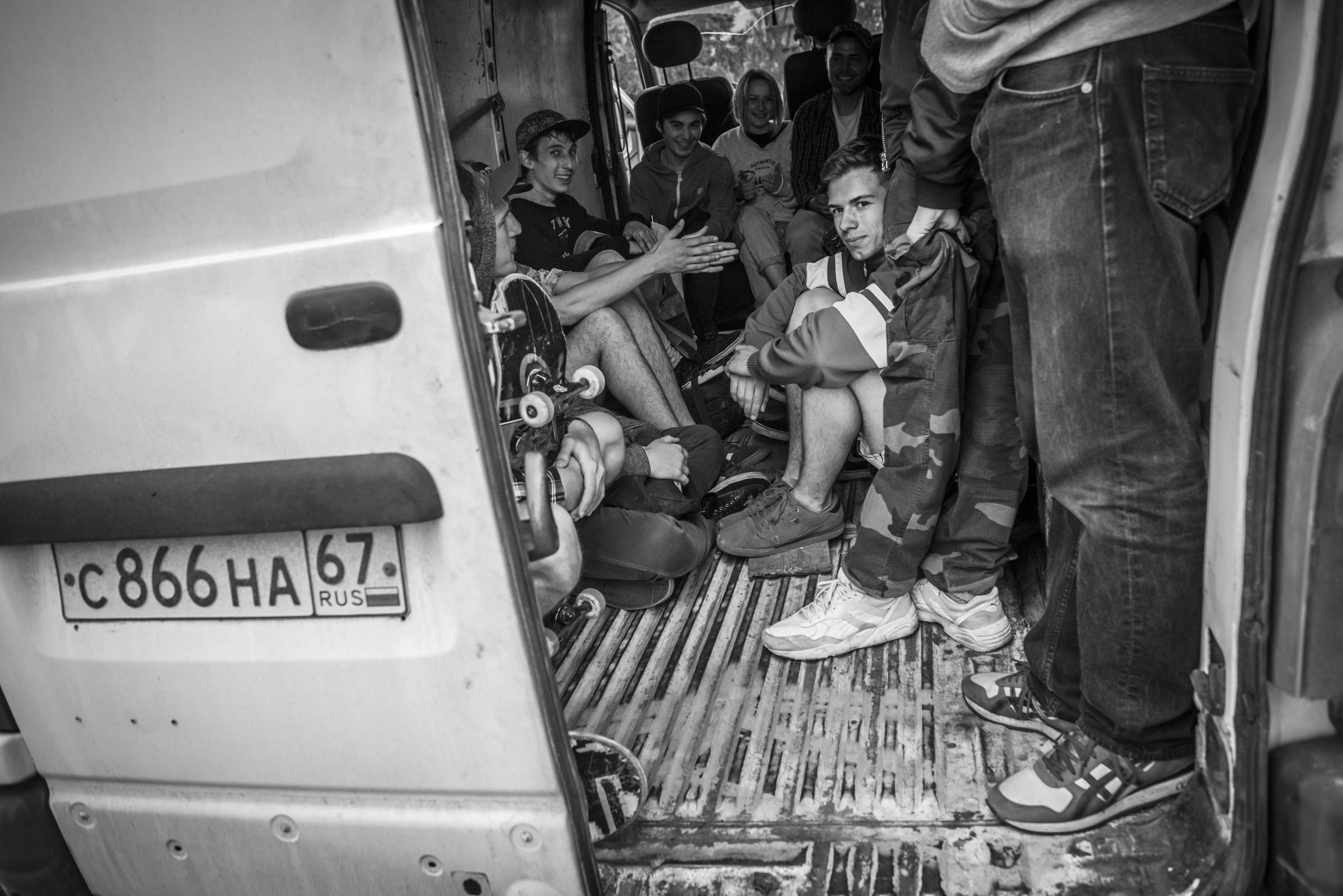 A blossoming industry led to an influx of international skate tours: guys like Kenny Reed, Mike Vallely, Marc Johnson and Rodney Mullen – some of the first pro skaters to come to this country – showcased the possibilities of skateboarding culture, proving that it isn’t limited by borders or nationalities. By 2008, our first skate companies – Rebels Skateboards, Union Skateboards and Absurd Skateboards – began to flourish.

Yet with the national currency rate dropping recently, skateboarding in Russia is facing fresh challenges. When a new skateboard costs around half your monthly salary, the uptake is going to be limited. Security remains an issue, too. People barely care about Lenin statues, but skating World War II monuments will get you in serious trouble – a few days in jail. Then there’s the weather. Winter typically lasts six months, but northern provinces can be covered with snow for even longer. The problem with taking things indoors is that rents are high and no one can make a profit from skate parks, forcing people to come up with DIY solutions. 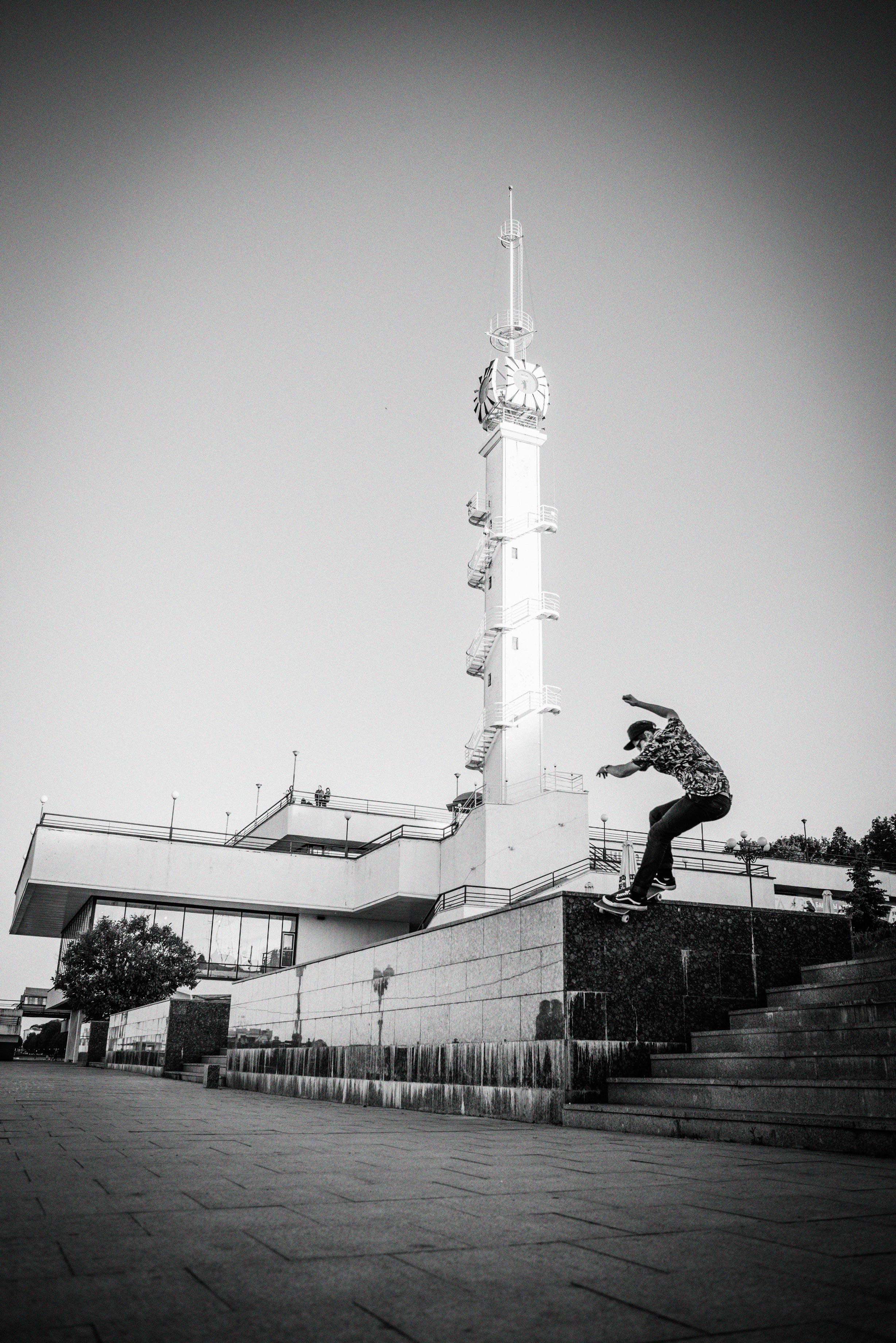 “Last winter me and my brother worked on a bowl project called Loop Skatepark,” Philipp Karel told me. “We spent five weeks building it. The hardest part was lack of knowledge: only two guys out of the whole crew knew how to work with concrete. For about a week, we slept less than two hours a day and it was freezing cold even though we were inside. By the end, we had a sick concrete bowl that helped improve our skateboarding skills and became our winter base for a couple months. But we closed it down in April because spring came and everyone was back in the streets.”

But these challenges just make Russian skaters stronger. If you go to any Siberian city with a population of over one million, you’ll find at least 10 skaters there determined to keep the culture alive. Having always been cut off from the core, Russian skaters are less affected by the latest trends and fashion and try to do things in their own way. And at the heart of it all – like any skate crew around the world – is a passion for fun, adventures, good times and freedom.

Linkedin
RELATED ARTICLES
OTHER ARTICLES
A centuries-old tradition is offering families a way to honour the deceased, reports Arbab Ali.
Over the weekend, the United Families & Friends Campaign organised a protest calling for an end to deaths at the hands of the police.
Following the release of their third album, the duo talk collaboration, family and connecting with the dead.
Whether it was seacoalers in Northumberland or the miners’ strike, the photographer was always fully immersed in the story he sought to capture.
A campaign led by ex-torture survivors and refugee organisations has left the Tories with no planes left to carry out their callous scheme.
Photographer Chloe Dewe Mathews reflects on the diverse rituals that continue to persevere along the river– despite the changing London landscape.