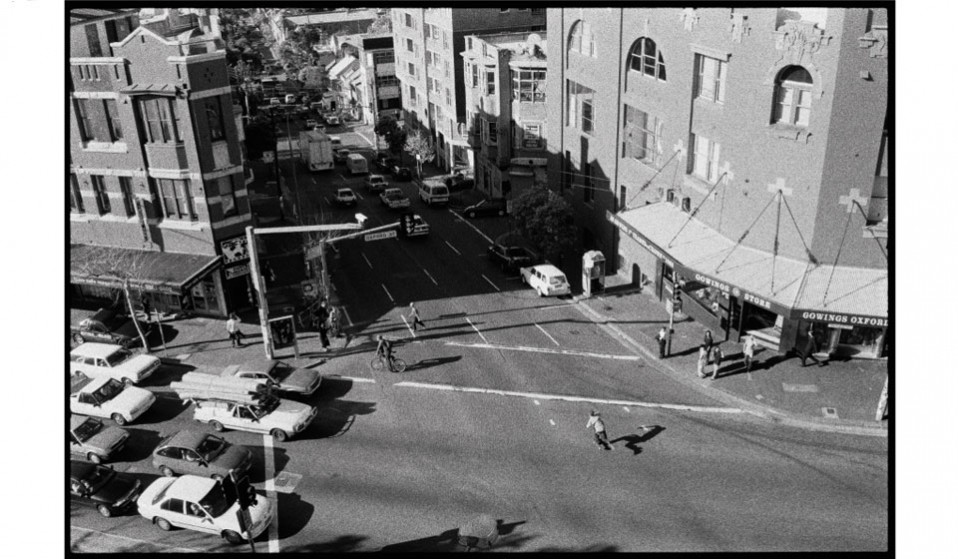 Nobody knows the Sydney skate scene like Mike O’Meally and Andrew James Peters: two of the city’s finest photographic exports. HUCK sits down to chat magic moments and throwing cameras in bins.

Nobody knows the Sydney skate scene like Mike O’Meally and Andrew James Peters: two of the city’s finest photographic exports. HUCK sits down to chat magic moments and throwing cameras in bins.

I’m sitting in the upstairs bar of Harpoon Harry, a watering hole on the corner of Wentworth Avenue and Goulburn Street, in Sydney’s Surry Hills. With me, I have two of Sydney’s best-known and loved skate photographers, Mike O’Meally and Andrew James Peters. If Mike, 41, is the godfather of Sydney skate photography, 27-year-old Andrew is the prodigal son. And despite their age difference, both are veterans of the city’s skate scene.

Both currently based in Los Angeles, Mike – who’s worked as senior photographer for Transworld among other things – and Andrew are back in their hometown for a one-off photo exhibition hosted by Oakley. As part of the brand’s In Residence series (which has also seen creative spaces pop-up in London and LA), the pair are showcasing 15 of their best Sydney skate shots in a Surry Hills studio space, alongside legendary skate lensman Atiba Jefferson.

The opening party is tonight, and they’re anticipating a heavy session ahead. But before all that, I want to find out what makes Sydney a breeding ground for homegrown Australian talent and a destination for professional skateboarders from around the world.

What is it about Sydney, as a city, that’s gifted it such a strong skate scene?
Mike O’Meally: I guess it’s got its own weird brand of architecture. It’s got something about it – like that old style of British architecture. It’s my hometown, so I’m not trying to say it’s the greatest skate city in the world, but it’s definitely got something.

Andrew James Peters: The whole process of going skateboarding and getting stuff done – tricks-wise and whatnot – relies on how comfortable you are. Sydney’s just got a rad vibe to it. Everyone’s friendly, everyone’s happy, the beach is nearby – that whole vibe brings people out here who just wanna have fun and go skateboarding.

What do you think the main differences are between shooting in LA and shooting in Sydney?
Mike: I definitely notice the difference in scenery – gum trees, thunderstorms. It barely rains in LA. Some of my favourite photos I’ve shot here – and there’s one in the show – have been in the rain.

The way people skate is different here too. You can meet up in the city and push around, start in one spot and meander. In LA you’ve got to have a bit more of an agenda. It’s nice to come into the city and have no agenda – that’s how I grew up skating. Meet at Martin Place or Hyde Park and it’s just, ‘Alright, what do you wanna do?’ It’s just a bit more free-flowing.

Andrew: Most of the people who skate in Sydney aren’t doing it for a living. They’re just doing it because that’s what they wanna do on their weekends. Even the boys that are sponsored, they’ve still got jobs, so when the weekend comes around, they might wanna try a trick, or they might just wanna hang out and skate.

Mike: It’s just home. That filters in to everything you do here, especially taking photos. If you get a photo here, it’s different to getting a photo anywhere else. Call it hometown pride or whatever. There’s definitely an aspect of that. Having this show and kicking it with this guy [points to Andrew] – it’s all part of what’s rad about being from here.

Andrew: I think you’re always just looking for that one special thing here. In LA, you’re just looking for tricks. It’s all about gnarly tricks that haven’t been done at a spot that everybody’s skated. Here, it’s more about the moment. It’s more special when you walk away with something.

My mentality flying over here knowing that I’m going to be here for six weeks is that I just want to get one photo. I want my ‘end of the year’ Sydney photo. Just one. Whereas I go out in LA and I have to get a photo everyday just to get by.

Do you have one photo that encapsulates the skateboarding scene in Sydney?
Mike: It was hard to pick 15 for the show, so it’s going to be even harder to pick one.

Andrew: Can I pick one of Mike’s? One that’s always been super special to me and a lot of skaters from Sydney is the photo of Michael Davidson ollieing over The Rocks rail. That photo kicked off a really famous spot, it’s shot really well, and it says something about the time. Steve Tierney is even there in the background. Tiebs, Michael Davidson, Mike O’Meally, The Rocks: everything about that photo says skating in Sydney in the ‘90s. That’s so Sydney. That, or Dion Kovac pushing into Crown Street… 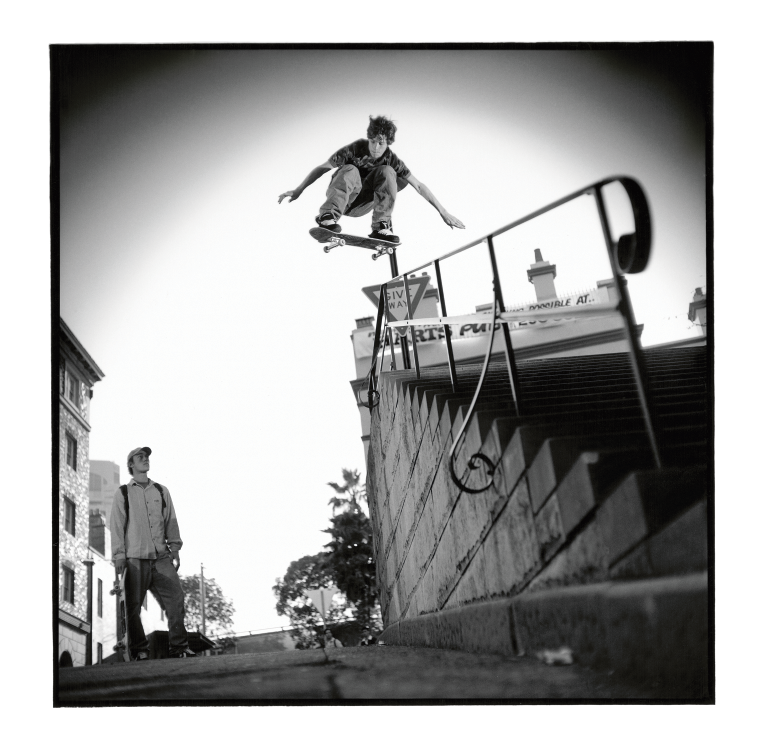 Mike: Funnily enough, that’s the one I was going to say because it’s not a trick. I just liked it because that street is such a main thoroughfare. Anyone that skates in the city, at some point, they’re going to bomb down Oxford Street. And once you’ve got that sussed, you’re going to bomb down Crown Street. People still do it and I shot that in ’95 or ’96.

I like that one because it evokes good memories of a time when skating was just about pushing around. It wasn’t so driven to sponsorship or making a career out of it. It’s a special photo for me, for sure.

Andrew: I don’t think any of my photos are that special Sydney-wise.

Andrew: Nah, I don’t have the classic photo of Chima that I want yet. I want something that has all of those elements, like Mike’s two photos. I have photos of other people in Sydney, doing different stuff and I really like the photos, and perhaps if they were of Chima one of them would be ‘the one’, but there’s so much behind the story. 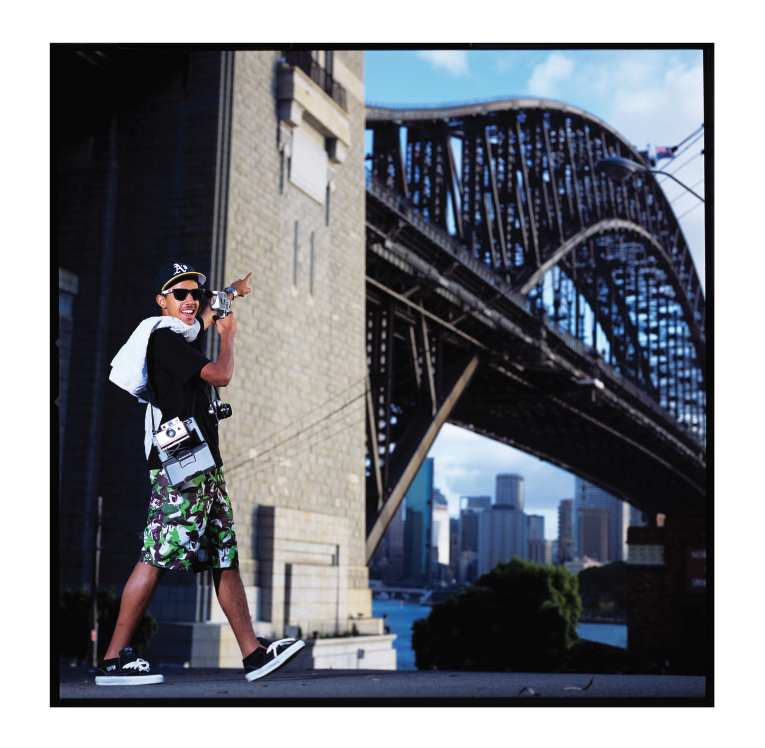 Mike: You just gotta wait for those things to come up. It’s dumb luck sometimes.

Me: And when it comes up, you probably won’t have your camera.

Andrew: Or I’ll throw it in the bin by accident.

Oakley In Residence Sydney is located at 74 Commonwealth Street, Surry Hills and is open until November 29. 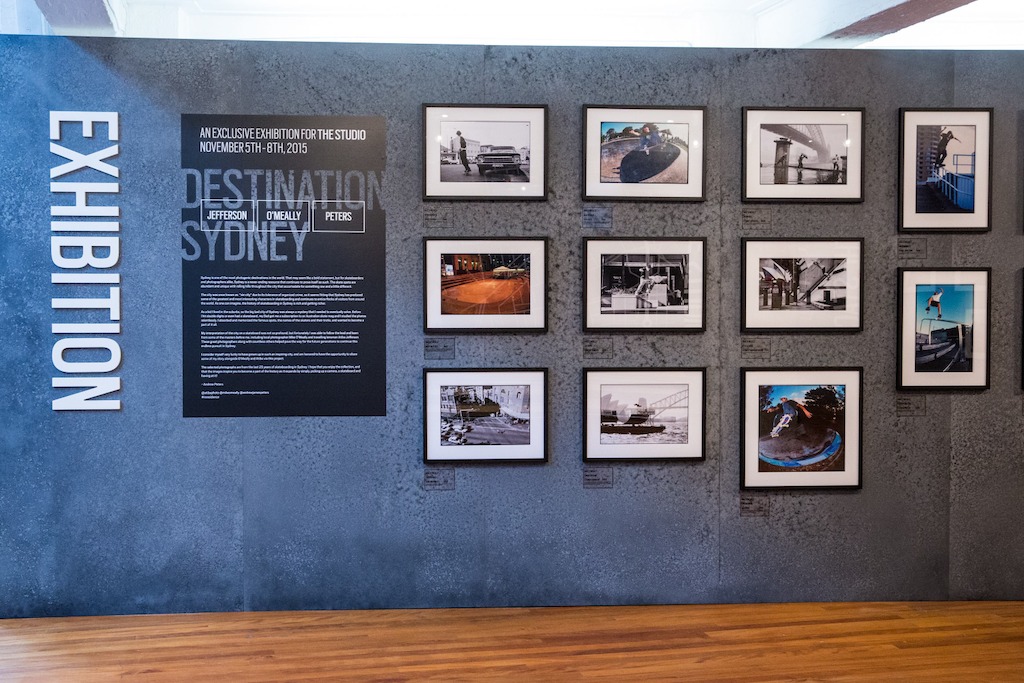 Linkedin
RELATED ARTICLES
OTHER ARTICLES
To celebrate his retrospective exhibition in Sydney, we catch up with Atiba Jefferson about the skateboarding photographs that have made him who he is.
To celebrate the launch of Lucien Clarke's new pro Supra shoe, photographers James Edson and Daniel 'Snowy' Kinloch curate an exhibition of the mythical PWBC.
A group photo show featuring London skaters and photographers Blondey McCoy, Daniel 'Snowy' Kinloch, Paddy Jones and iconic LA skate photographer Mike O'Meally.