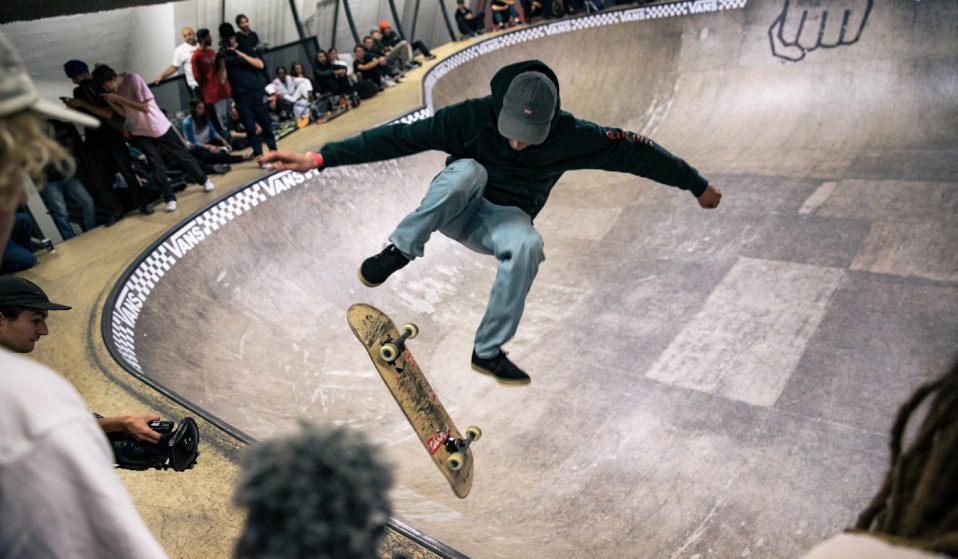 Pro legend John Cardiel opens up about the importance of skate camaraderie.

As Europe’s top skate-shop teams go to battle in Milan, determined to be crowned 2018's Shop Riot champions, we hang out with pro legend John Cardiel and soak up the importance of skate camaraderie.

The sun is setting behind Milano Centrale station, the sky taken over by a hypnotic swarm of starlings.

Skaters from across Europe have gathered below, grinding across a variety of obstacles in the plaza, weaving in and out of commuters making their way home. 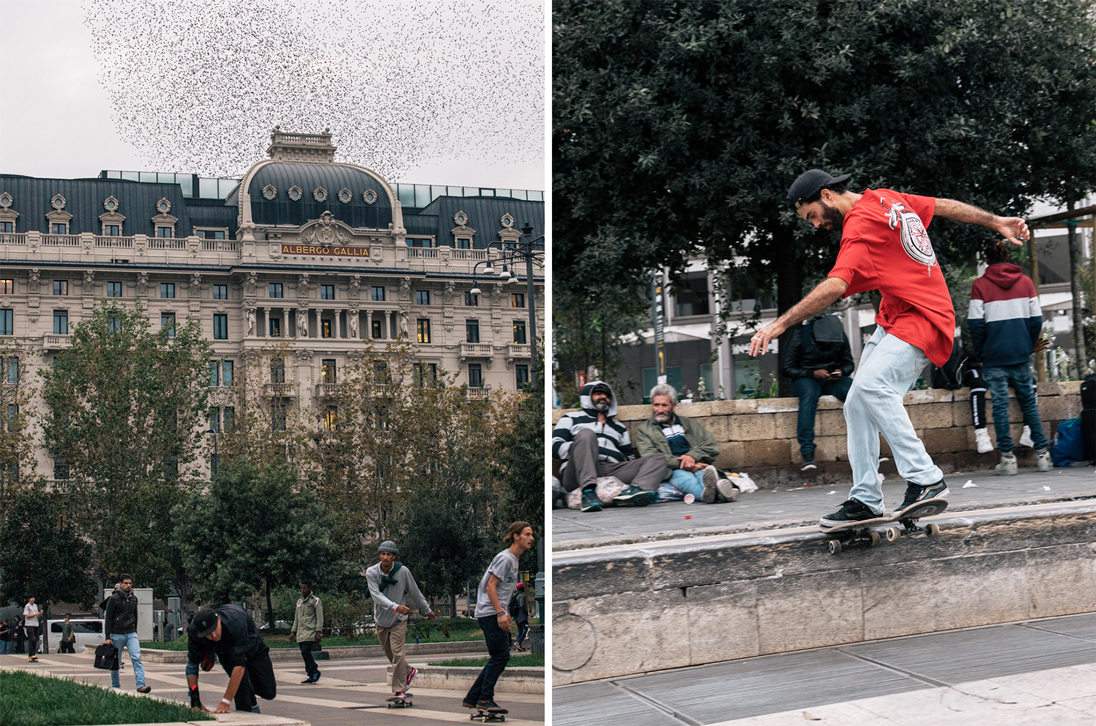 It’s the first day of the Vans Shop Riot Finals, where 15 skate shop teams have come to battle it out in the hope of being crowned champions – and this year’s event marks the 10th anniversary of the biggest skateboarding competition of its kind in Europe.

Opposite the dramatic facade of the station entrance, riders take turns sliding their way across a long semi-circular step while a backdrop of onlookers pretend to be unimpressed.

This is a warm-up for the weekend’s main events; the first ever Vans Shop Riot Bowl Jam held at Bastard Bowl, followed by a second day of knockout-round skating at Pinbowl Skatepark. 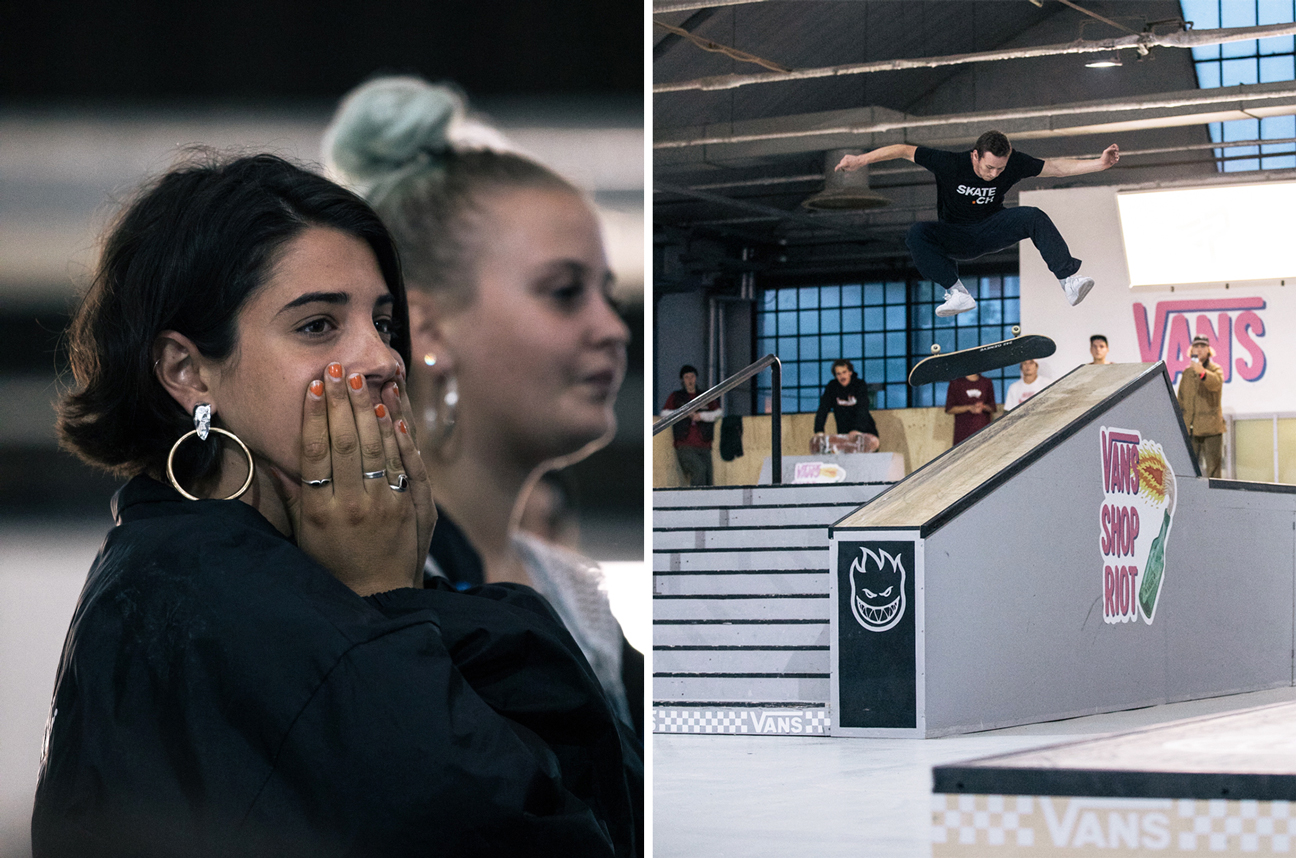 Every year since 2008, the Shop Riot series has provided a platform to showcase the best of grassroots skateboarding in Europe, celebrating skate shop culture and the community it supports.

To get a better sense of just how important that is in 2018, we hung out with skate legend John Cardiel before catching up with some of the teams to learn more about their local scenes. 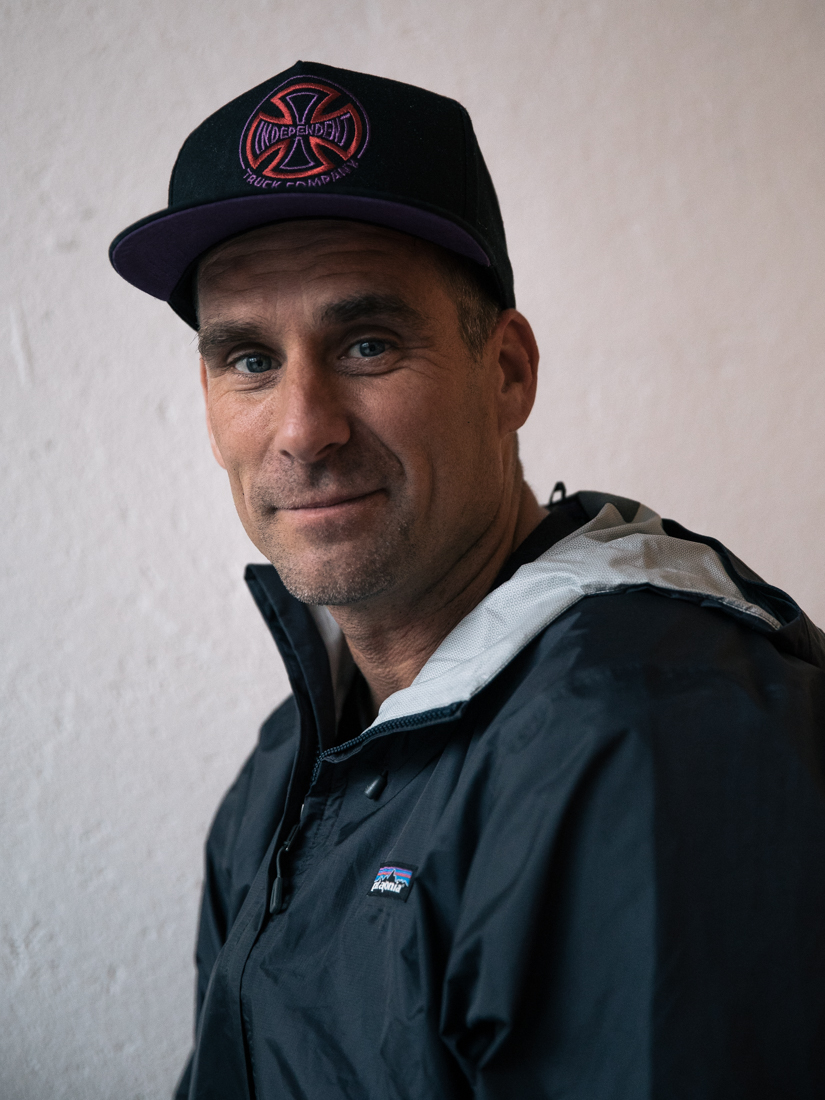 Words of wisdom from John Cardiel

Can you describe the role of the skate shop in the skateboarding community?
It’s extremely important because it brings everybody together in one place. They share spots, go skating together, check out product, and build a skate community through the shop. I think it’s everything.

Was there a particular shop that had a impact on you when you were growing up?
Yeah, Go Skate was a big skate shop when I was growing up. They had the smallest wheels that they’d slide down onto the wall, and you’d look at them coned out all the way down to the baring and think, ‘Fuck, those dudes go hard.’ 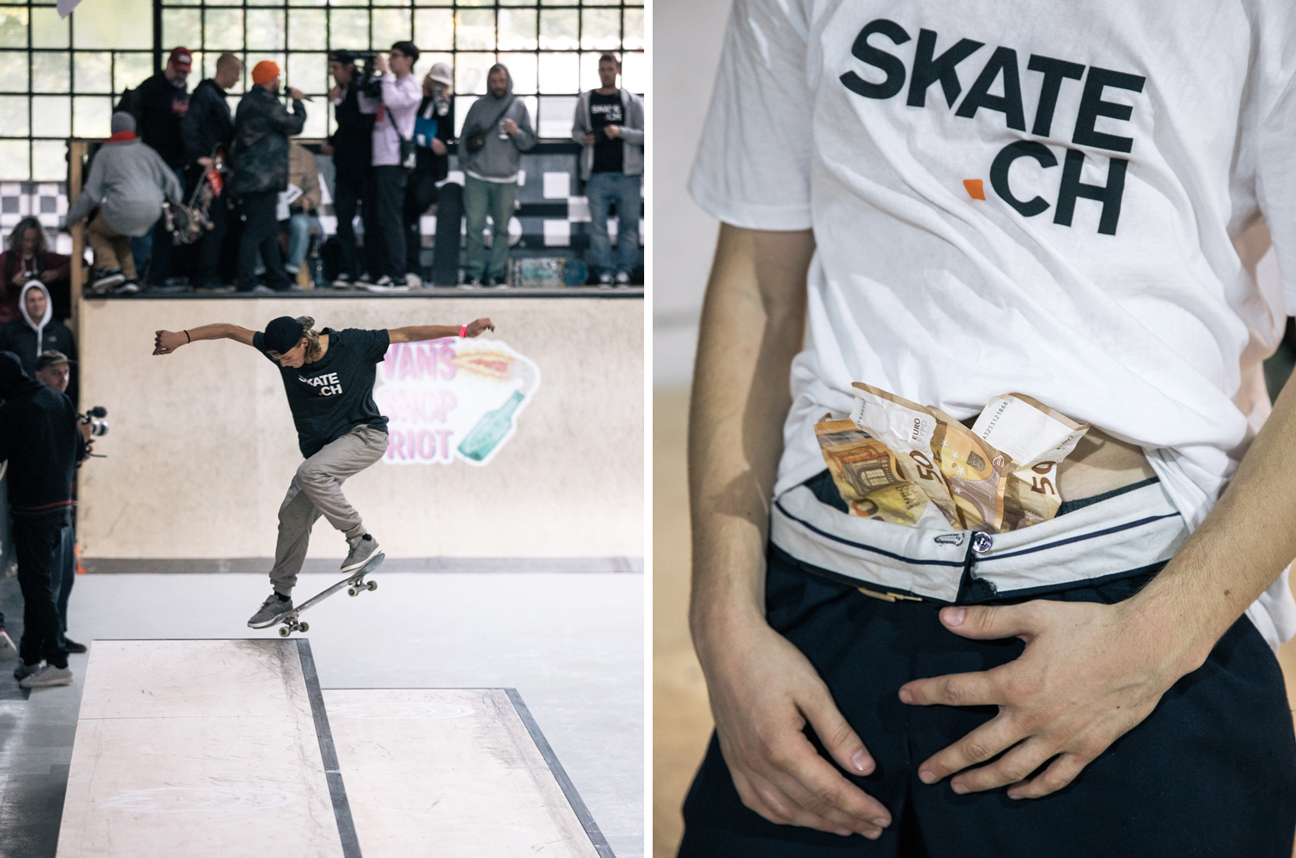 Something very present in skate culture is the lack of barriers between the top pros and kids going to a skate shop…
Yeah, man; I agree. As skateboarders, we don’t think that anyone is really better than anyone else.

When you skate you resonate with those people, and those are your kin. If you’re starting to do tricks, you share those same emotions, it doesn’t matter if they’re better, it’s the feeling that you both share.

And it doesn’t matter where your from, you still have that same feeling.
For sure. Skateboarding is an international language. I’ve travelled around the world and met hundreds of skateboards in different countries and it’s always the same vibe, always the same aggression. 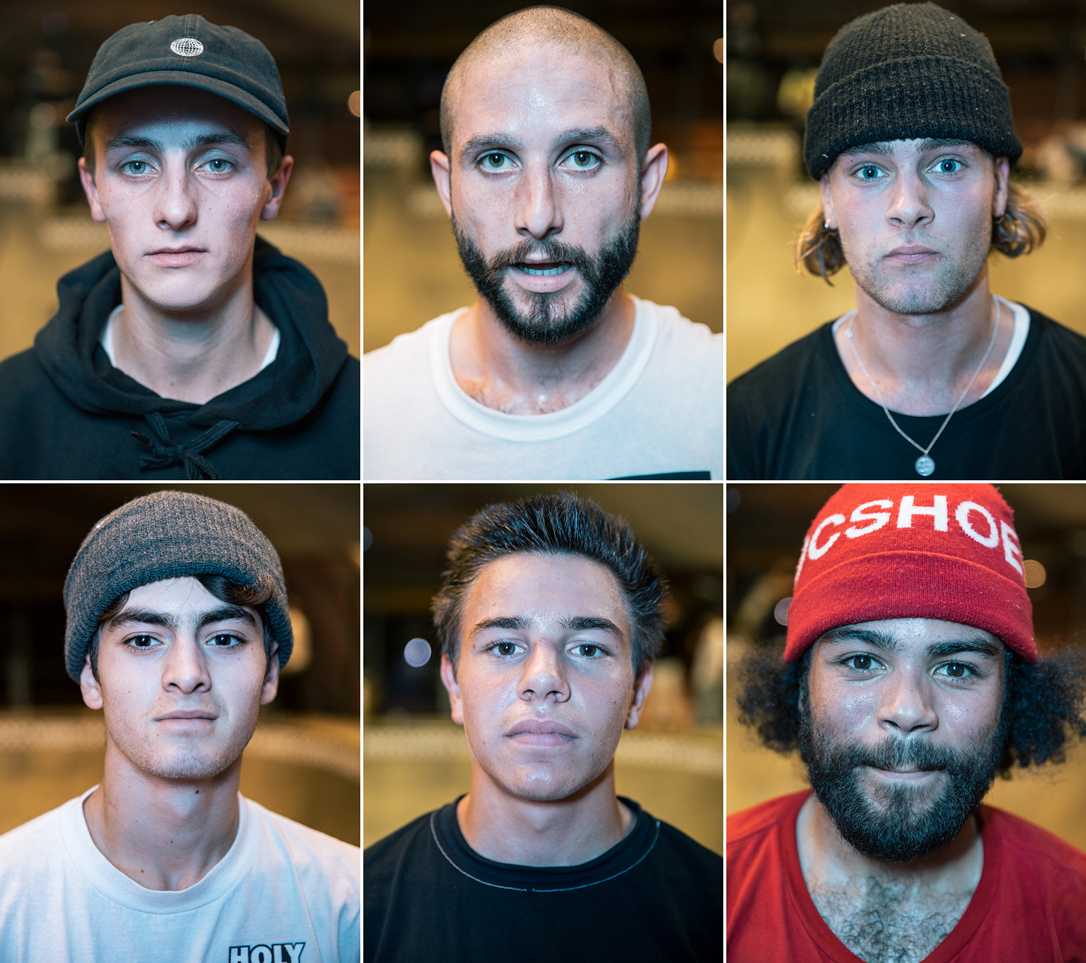 This is your first time here. What do you think makes this competition special?
It’s just good to see the camaraderie with the guys that are on the same team, they’ve got love, and they’re stoked with each other because they know each other’s tricks.

Similar to what you have with Anti Hero?
Straight up, Anti Hero has always been my family. Jake Phelps, Julien Stranger, Joey Tershay, we travelled the world together.

How important would you say travelling is for skateboarders? Opportunities like this where they get to travel, compete, and see familiar faces.
Super important. You’re learning and you’re building; you’re gonna see those guys again on a different trip, and it just builds the community up that much more. 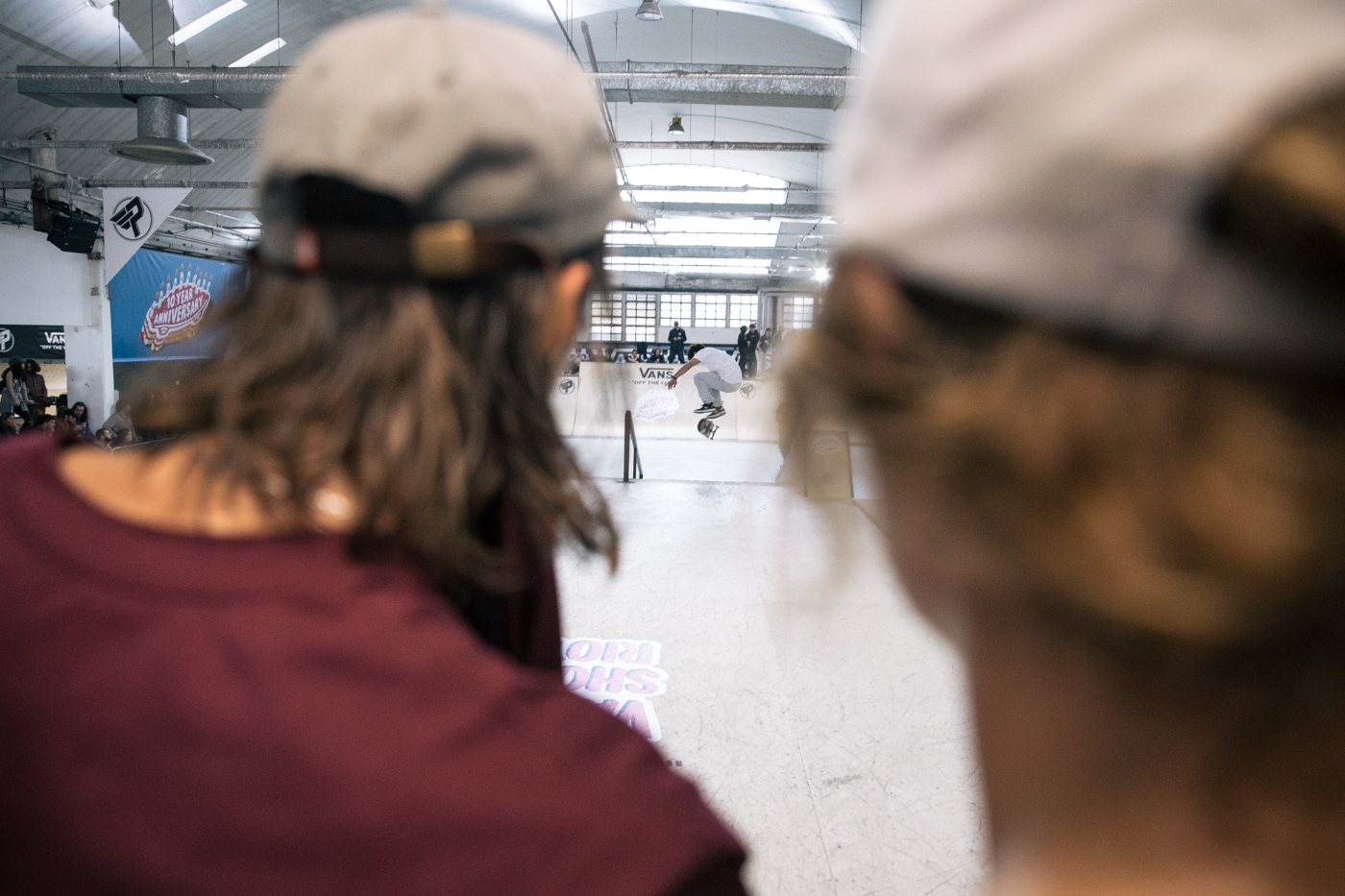 What are the places that had an impact on you?
San Francisco was major for me. I used to go down there when I was a kid and it was like a Mecca of skateboarding, everybody was family. One time I kicked my board and hit a bike messenger, broke his spokes. The guy wanted to beat me up, but someone stepped up and protected me. Just because he was a skater, he had my back – which is fucking cool. He’s on your team… every skateboarder is on your team. And it’s a pretty big team!

It is massive… and you’ve had such a tremendous impact on that team. How does that feel?
Shit man, I don’t know, I’m a skateboarder, and every skateboarder is my family so I’m just stoked. 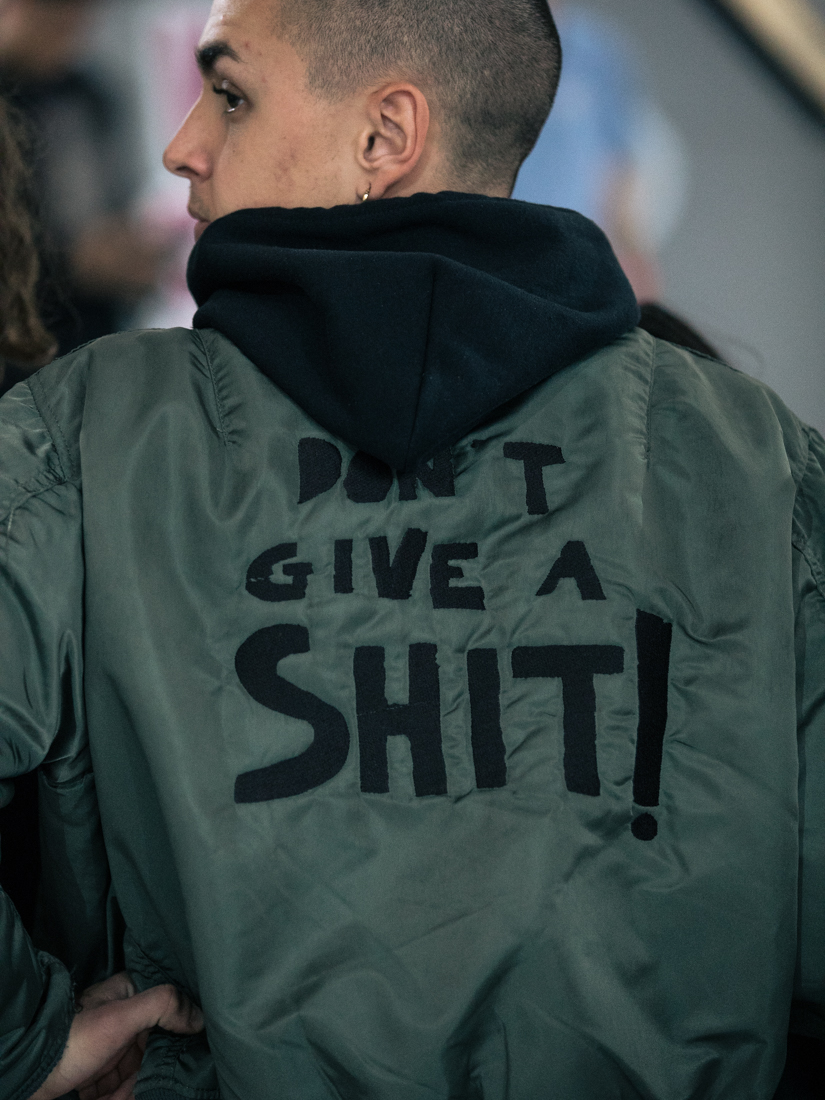 What advice would you give guys from teams at this event that don’t get to skate together that often?
Well, I would say keep competing together. I think it brings you closer and gives you an opportunity to skate different places. It’s not just the contest; you’re far away from home and skating different shit you wouldn’t be skating otherwise. That alone is awesome. Maybe you don’t skate with them all the time, but they’re your homies, and you just bond even tighter.

In a previous interview, you said that you’ve breathed skateboarding for so long that you have a kind of skate vision. I wonder if this mentality helped you overcome the accident you had in 2004, when doctors said your spinal injuries were so severe that you would never walk again?
You just draw from skateboarding in everything you do. I would be naked without that skateboarding mentality. 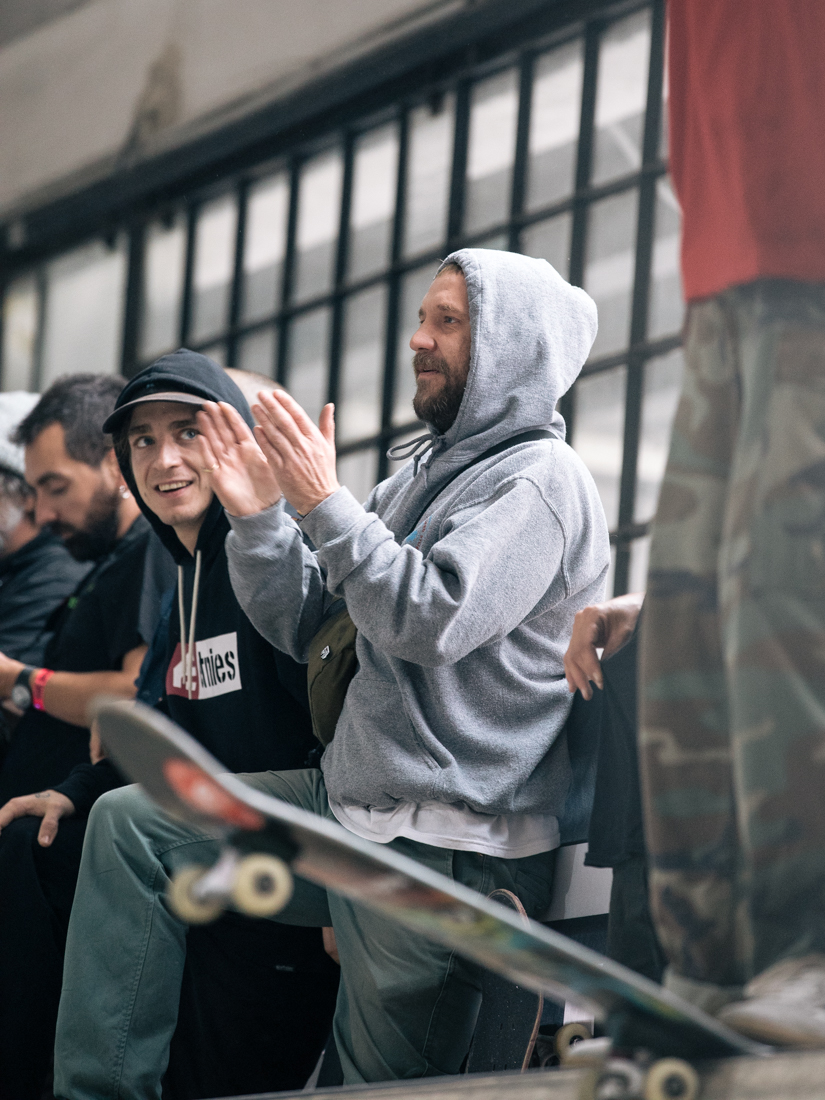 In what way?
It’s like a trick. You just keep trying that trick until you make it. So for me, it’s exactly the same thing. I wake up and can’t move my legs, so I’m making myself move my legs until my legs move.

It’s just the same as somebody working on a 360 flip: you’re thinking about foot placement, how to scoop the tail, how to flip it – just constantly thinking about it until you make it. It was probably one of the greatest achievements of my entire life.

What advice would you give to others who have other horrible accidents?
Just keep that light at the end of the tunnel and know that you’re gonna make that trick one day. You have to believe that you will do it, because if you don’t you’re just going to defeat yourself. You can’t ever give up, just like skating. As a skater, you know that you will make that trick. You might drag a foot at first, but you’ll make it clean. 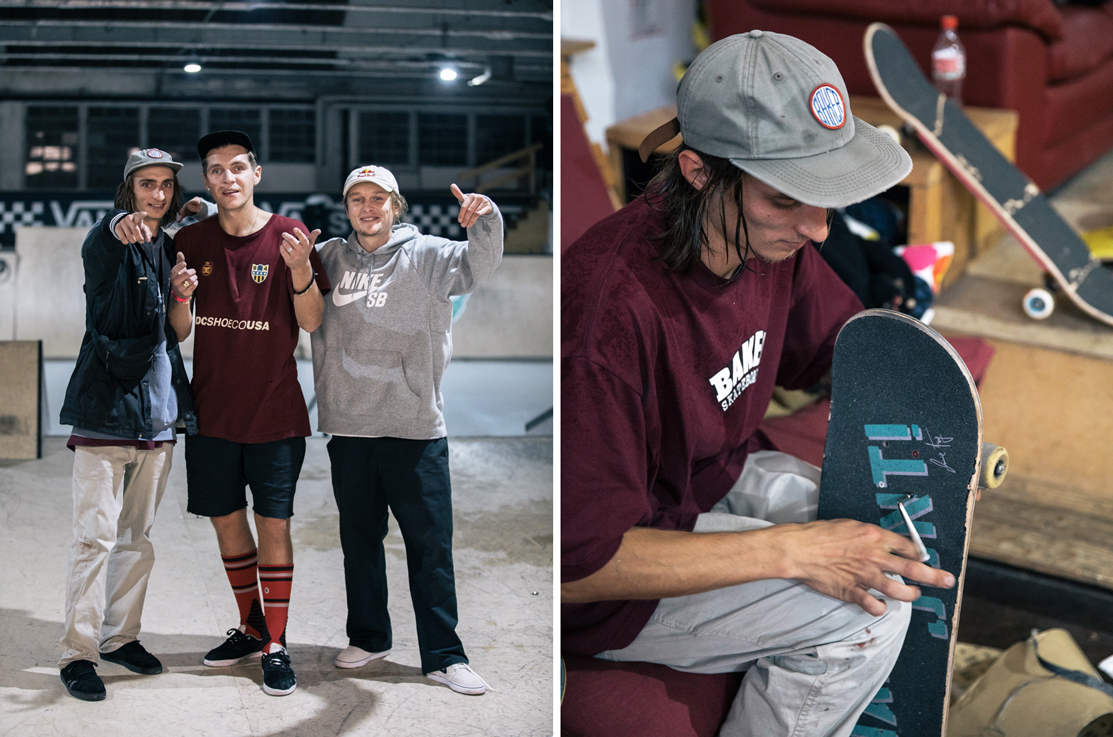 How was the skate scene for you growing up?
There were no skate parks, really, so it was hard growing up and skating in contests in Russia. We all live in Moscow now because it’s one of the best cities for skateboarding. They prepared the city before the World Cup so there is marble everywhere, it’s like a skate park in the streets.

The government made so many good parks, and every park has a plaza, so it’s great for the riders and the new generations now. We have a big skateboarding family in Russia; we always skate together and everyone knows each other. 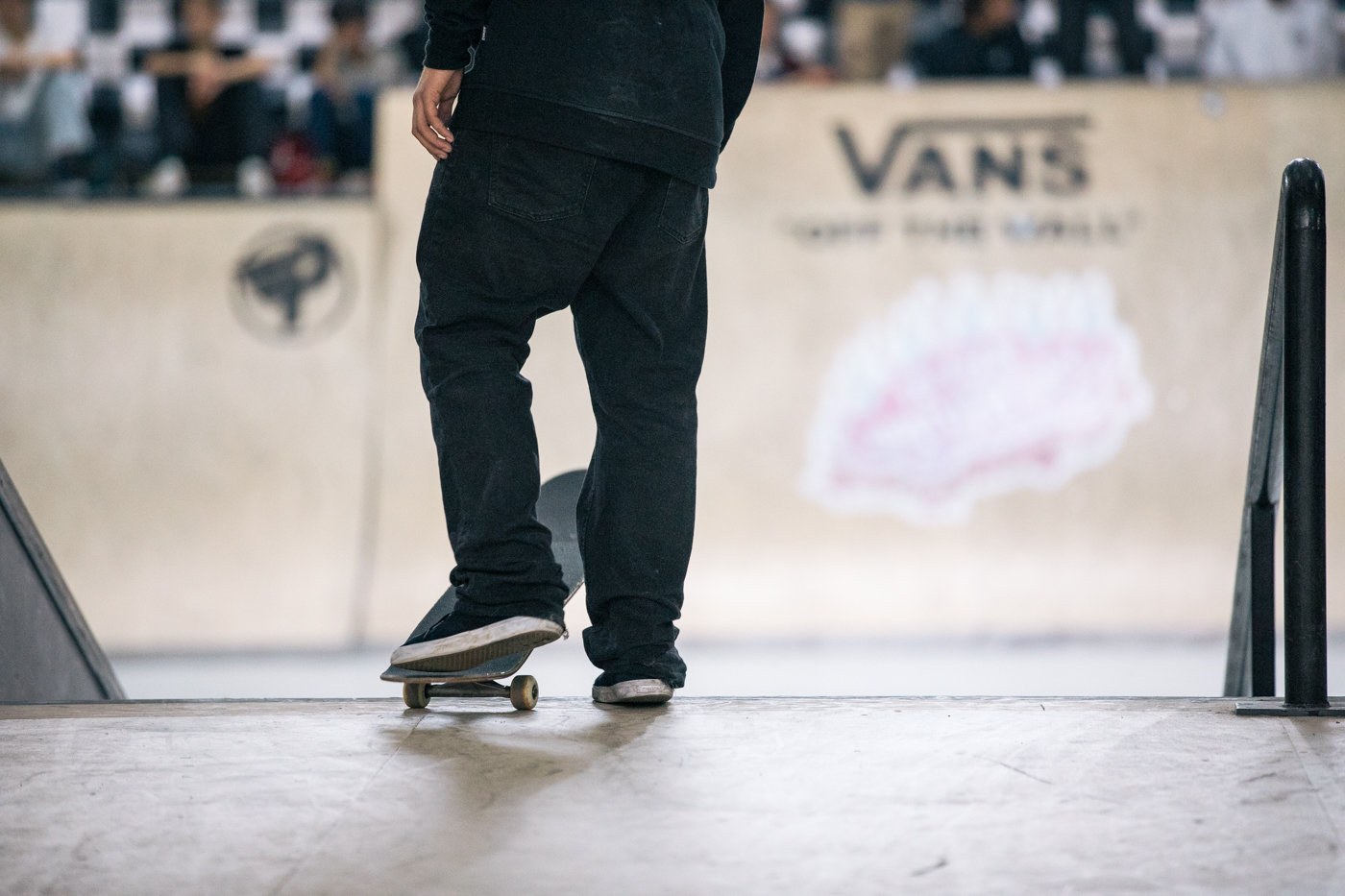 Do you travel much for skating?
Yes. As there aren’t so many festivals and contests in Russia, we need to travel around the world. Next weekend there is a contest in China, so maybe we will go to China. It’s always a gamble, like playing in the casino.

You buy your ticket, maybe you win more, maybe you lose. For sure you always play to play, though! It’s not about the money; it’s about the good vibes and hanging out with your friend from around the world.

What is the best thing about skateboarding for you guys?
I think it’s that people from around the world, from other countries and other languages, can feel together and be part of a family like a group. A normal situation in a normal day is skating with your friends. We can’t skate alone; it’s not for fun. We can only skate with our homies. 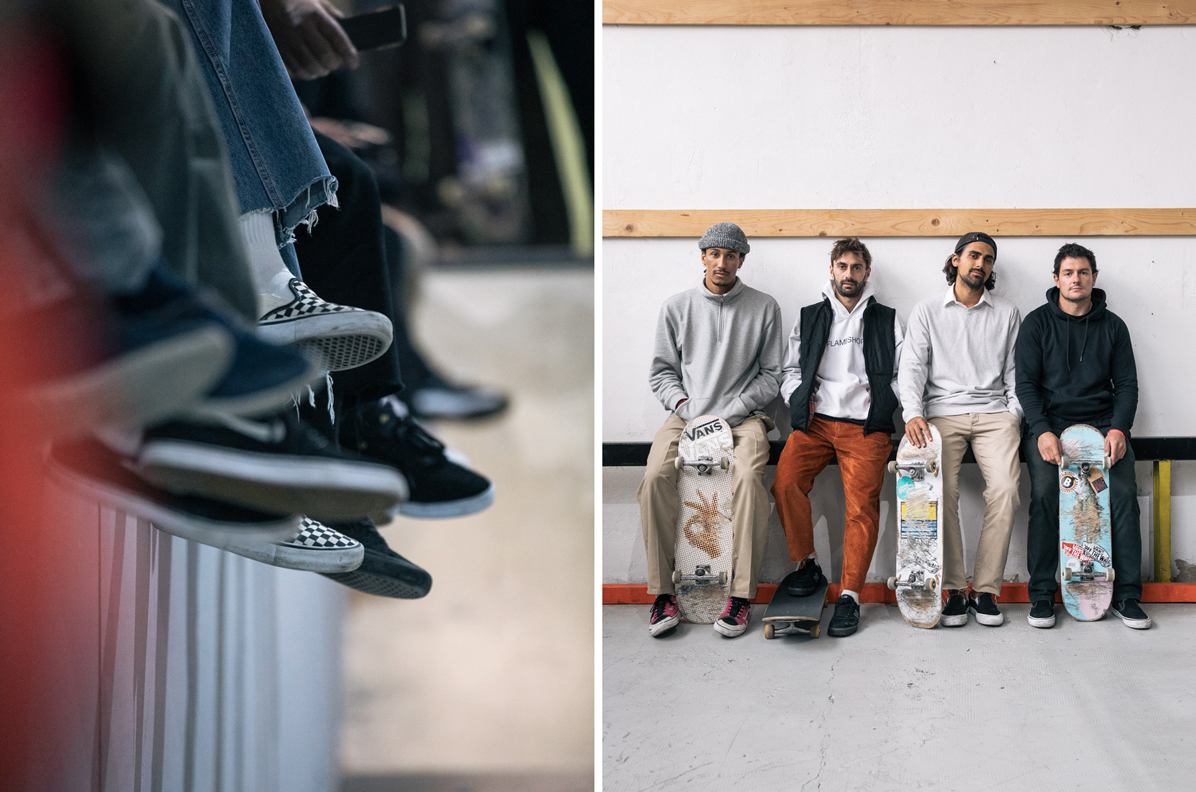 Do you guys feel a slight home advantage because the 10th anniversary of the Shop Riot finals are held in Milan?
To be honest, not really. For us, it’s such an honour to skate with the other skate shops in Europe and to be in the semi-finals. It’s actually a new skatepark, they have changed the course. Last time we came here, everything was a different, so it’s the first time for us as well.

How would you describe the skateboarding scene in Italy?
In Italy it seems like everybody skates for themselves. There aren’t really scenes where you find everybody skating together. Sure, in Milano Centrale you can find an attitude like that but it’s the only place, really. We are a few people, with a lot of love, and we are all good friends, so we try to motivate each other as one. 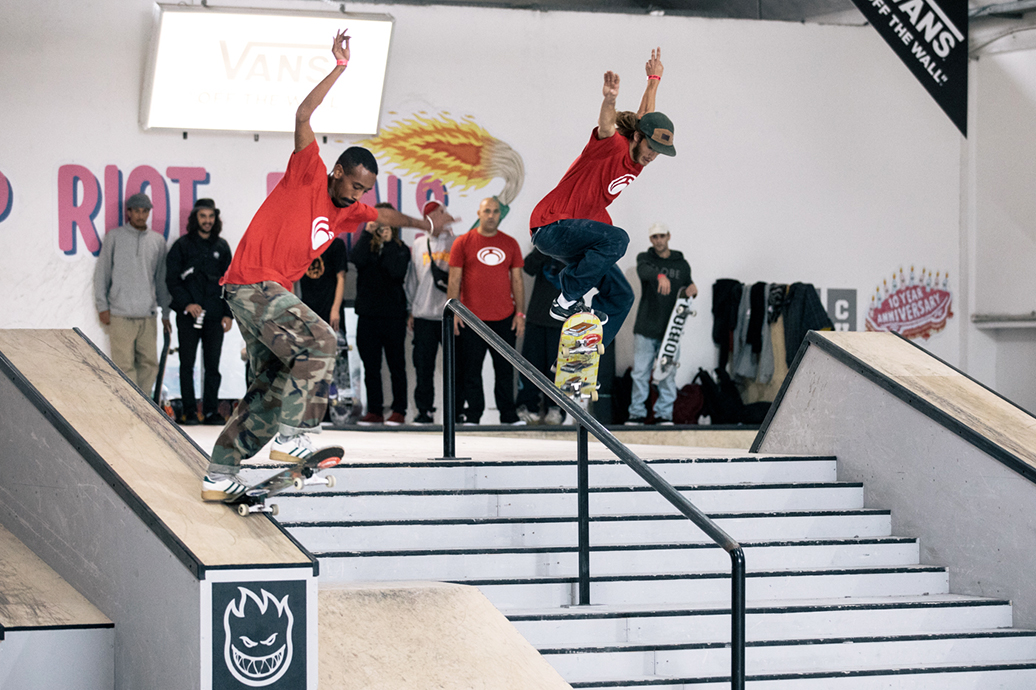 Did you know each other before you started skating with Flame Shop?
We have known each other for about 11 years, from skate competitions and skate culture. In Italy there are maybe 20 people that skate at a higher level – I mean that with the utmost humility. But the real struggle is to skate all day together, because we live far away from each other. It takes a two-hour train to get to Milan, so we only get to meet up a couple of times a year.

How does it feel to have a legend like John Cardiel here today?
It’s awesome, its very interesting to have a direct relationship with a legend. But this is skateboarding, we are all skaters, and there isn’t a wall between us. So it’s cool, but it’s normal at the same time. 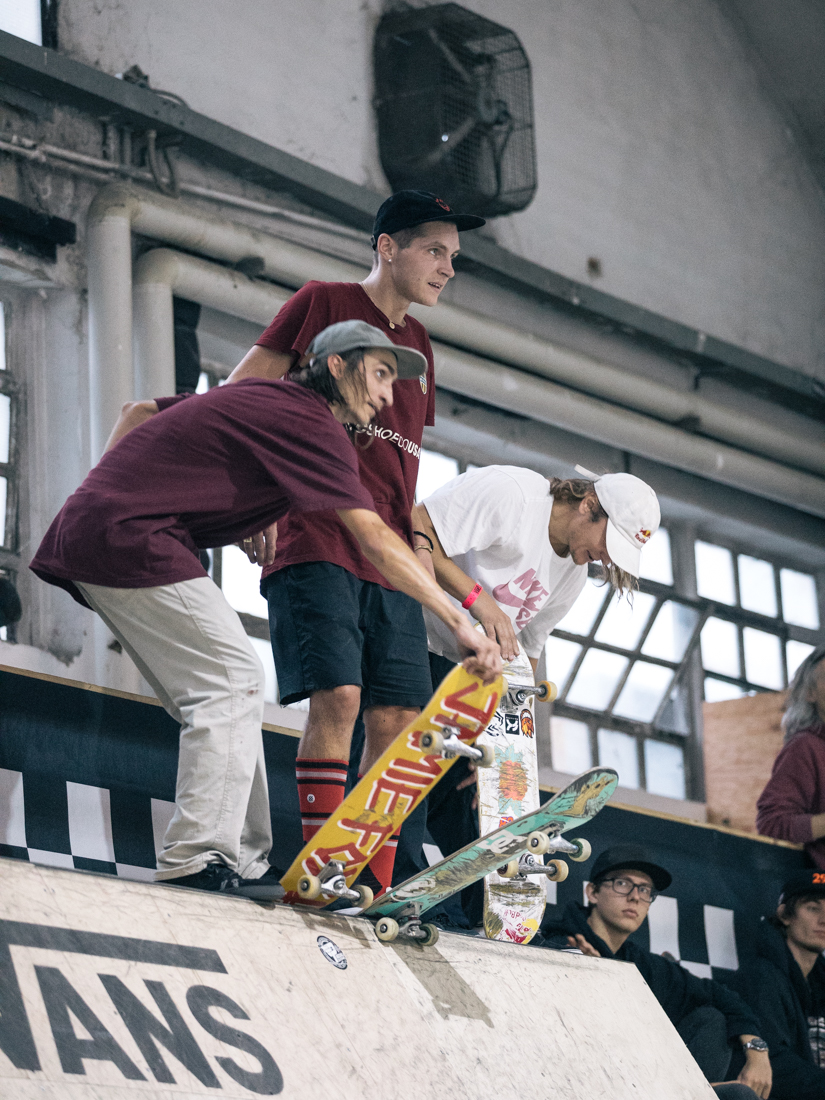 That’s one of the biggest differences with skateboarding and other sports or popular cultures, don’t you think?
We’ve chosen to live our lives in this way. Yes, it’s a contest… but you have to bring the vibes, the good vibes. That’s the most important thing in skateboarding.

What advice would you give some of the younger skaters here from Europe?
Don’t stop travelling. Travelling is one of the pillars of skateboarding. You have to know how people are skateboarding in Barcelona, in the US. You must be open-minded.

It doesn’t matter the difficulty of the tricks, you have to see the power. So probably the main advice would be to not skate for yourself, but do it with a crew, build the vibes. You can get at a certain level, but you can’t do it by yourself. Build a situation. 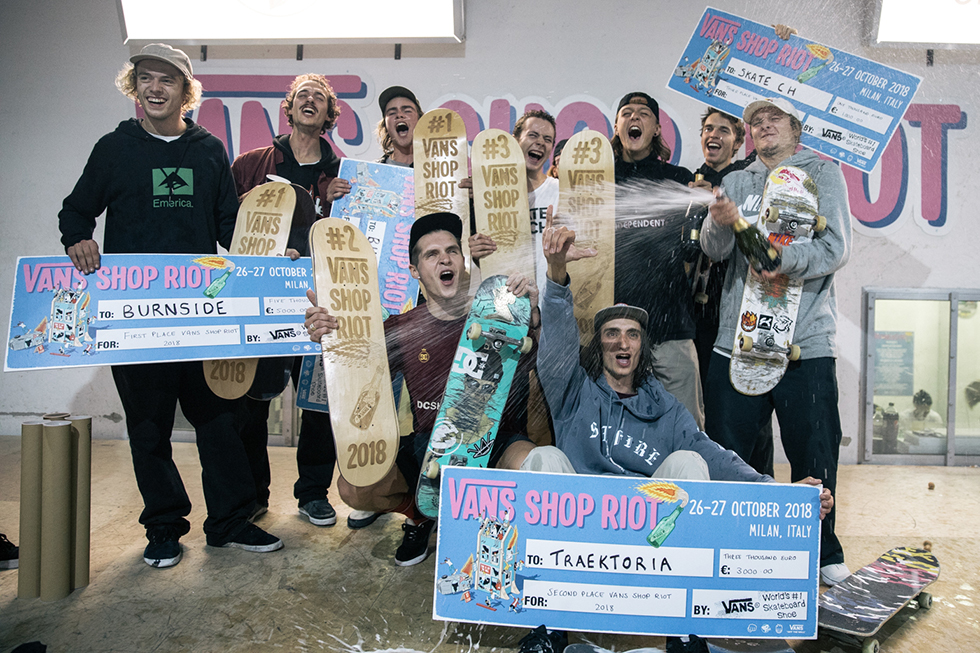 Linkedin
RELATED ARTICLES
OTHER ARTICLES
The action took place in response to the 200 asylum-seeking children who were placed in hotels run by the Home Office who have gone missing.
Photographer Sean Maung reflects on documenting a small town in Pennsylvania afflicted by high levels of unemployment, poverty, violence, crime, and addiction.
Tristan O’Neill’s shots of dancers caught in moments of reverie at the height of rave’s golden age are a testament to the UK’s legendary club culture.
At his West Bank restaurant, Fadi Kattan established himself as the voice of modern Palestinian cuisine. Now, he’s bringing his innovative, bold flavours to the UK’s capital.
A new film from Berghaus traces the story of Adam Raja, who left behind a turbulent upbringing to discover the healing power of climbing.
Since 2007, Gideon Mendel has made 20 trips to document floods in 13 countries. The result is an alarming record of what has already been lost to the climate emergency.