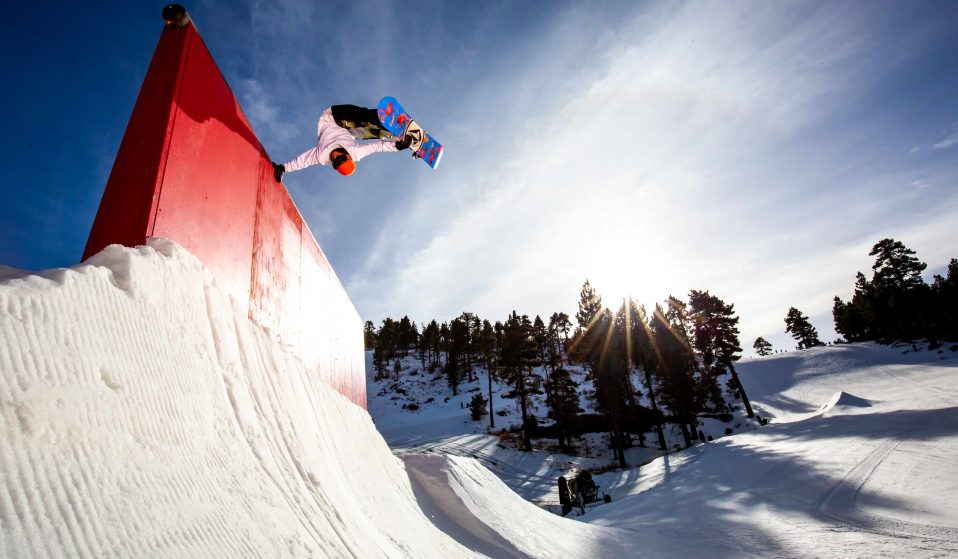 From Southern California to the mountains of New Hampshire, these spots are some of the most iconic destinations in the world for skiers and snowboarders.

From Southern California to the mountains of New Hampshire, these spots are some of the most iconic destinations in the world for skiers and snowboarders – whether you’re a first-timer or a seasoned pro.

But it’s choosing which exact one to visit that’s the tricky part. Thankfully, on your Ikon Pass you don’t have to choose just one.  After debuting in January 2018, the pass is into its second season for winter ‘19/20. In short: it’ll get you into 38 iconic destinations across the world, all of which are just as iconic as the next.

So to celebrate, here some of the most impressive terrain parks in the world, all of which are available on the pass. Whether you’re a first-timer or a seasoned pro, these spots – stretched across North America – truly are a must visit.

Home to the ESPN Winter X Games for the last 16 years, Buttermilk is one of the most recognisable terrains in the world. What’s more: after the X Games conclude at the end of January, you get access to the same superpipe and jumps that the pros ride during the competition. When it comes to testing yourself, there are few better places. 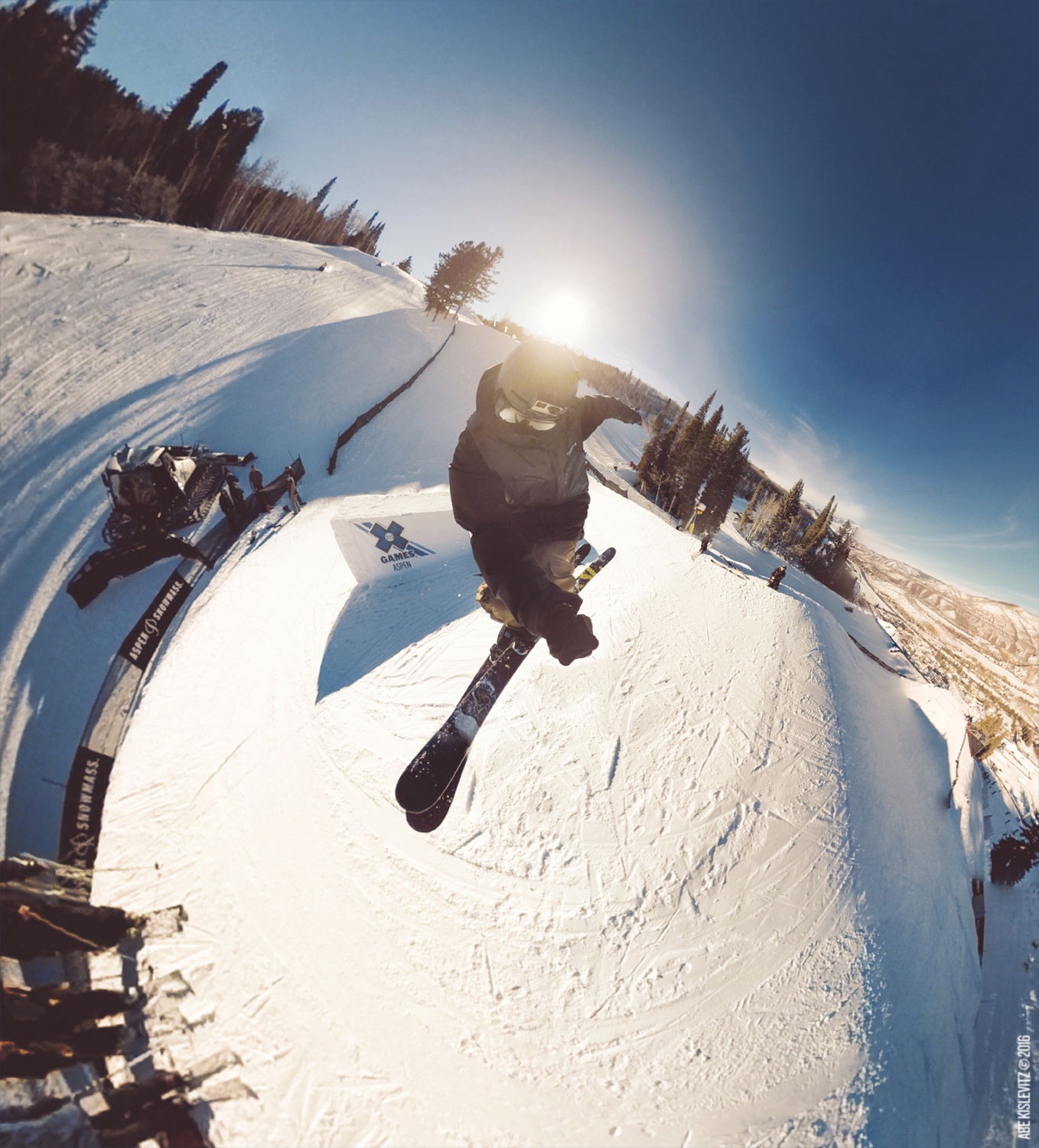 Located in the eponymous Mammoth Lakes, it’s home to the Unbound Terrain Parks, which have been testing riders’ skills for over 20 years. With 3 halfpipes, over 100 jibs and up to 50 jumps on any given day – all while covering over 100 acres of terrain – there are few better spots to train. And certainly few taller. 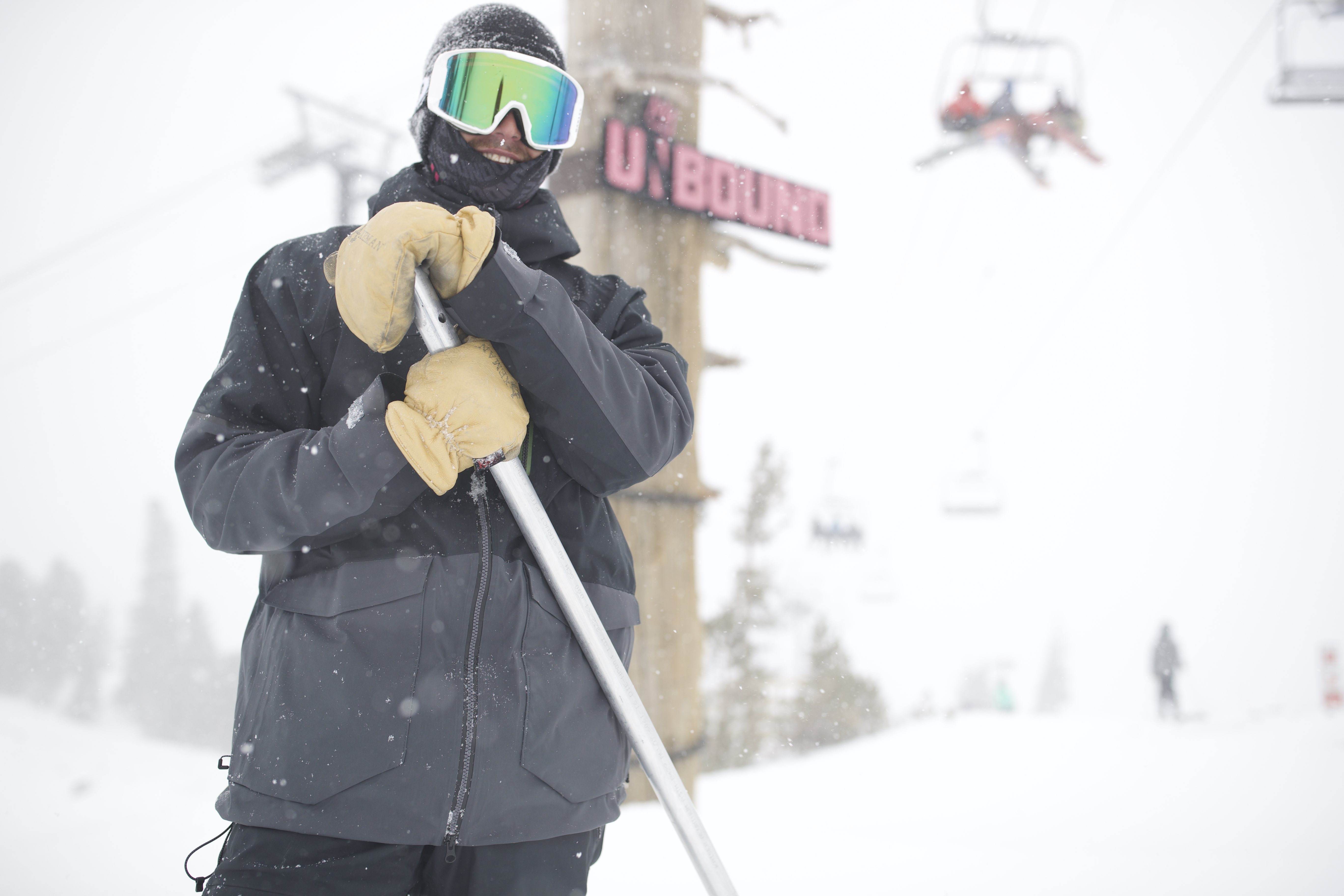 Though Brighton’s lowkey, word-of-mouth mantra is one of its unique selling points, its terrain parks are known all over the world. In terms of design and features, the Brighton team keep things changing 24/7 – it gives their parks an unpredictable fluidity that feels inspired by the world of skate. “What’s here today might be gone tomorrow,” states their website.

On top of that, given that the resort located at the top of Utah’s Big Cottonwood Canyon – just 35 miles from Salt Lake City Airport – it gets the “greatest snow on earth” in full force, averaging 500 inches every winter. Who can argue with that? 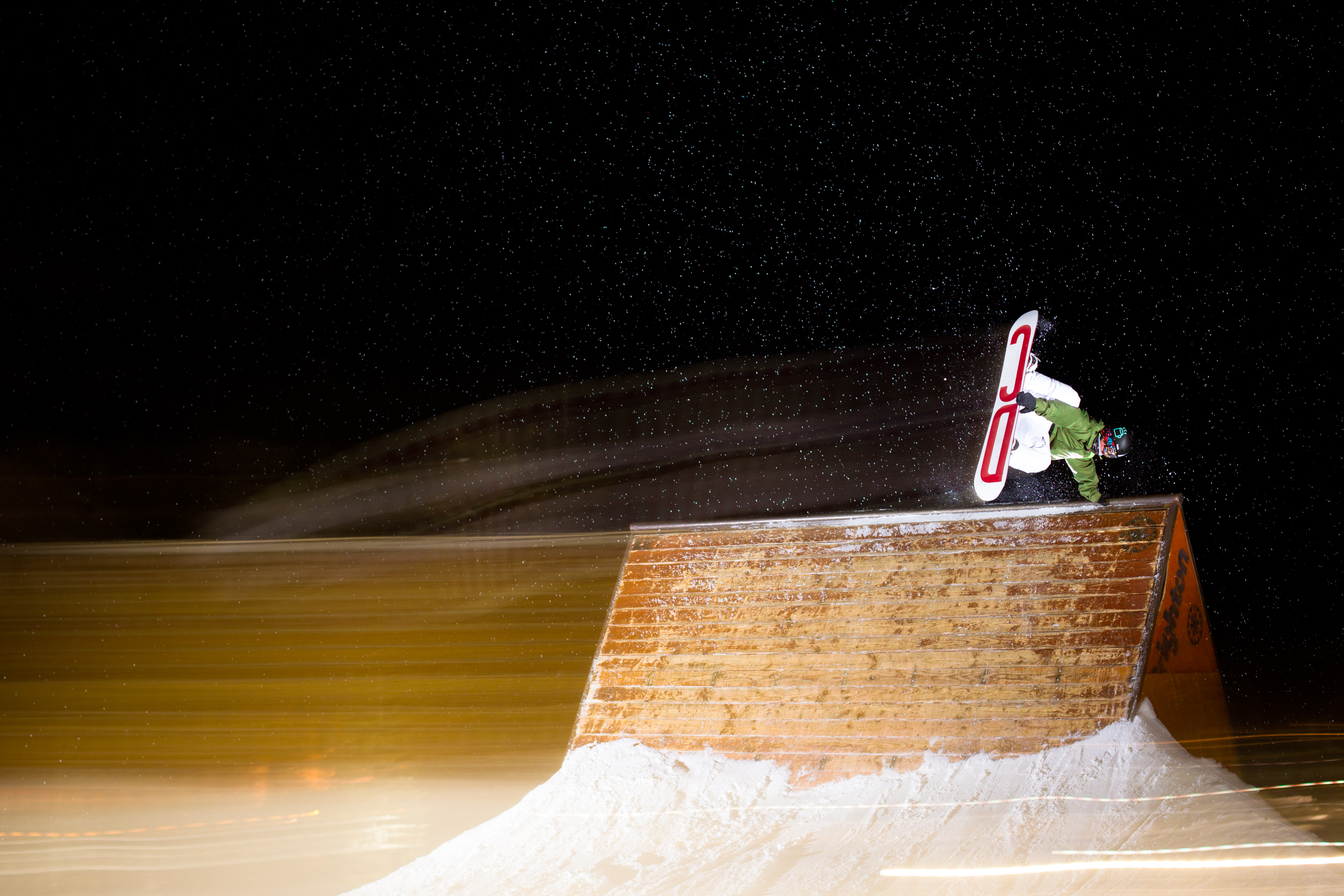 Big Bear is somewhat of a Mecca for park riders. Built in 1991, the California destination – 100 miles east of Los Angeles – provided the location for the first ever dedicated terrain park and Southern California’s only half pipe. Since then it’s been at the top of the game, welcoming some of the world’s most accomplished for almost three decades.

Home to California’s largest learning area and, with a state-of-the-art snowmaking system that’s second to none, conditions remain pristine all year round. On top of this foundation, Big Bear stays flush with a constant string of new collaborations and partnerships – like the Red Bull Plaza, full of urban features straight from the street scene. Always the originator, Big Bear continues to connect some of the finest lines from feature to snow. 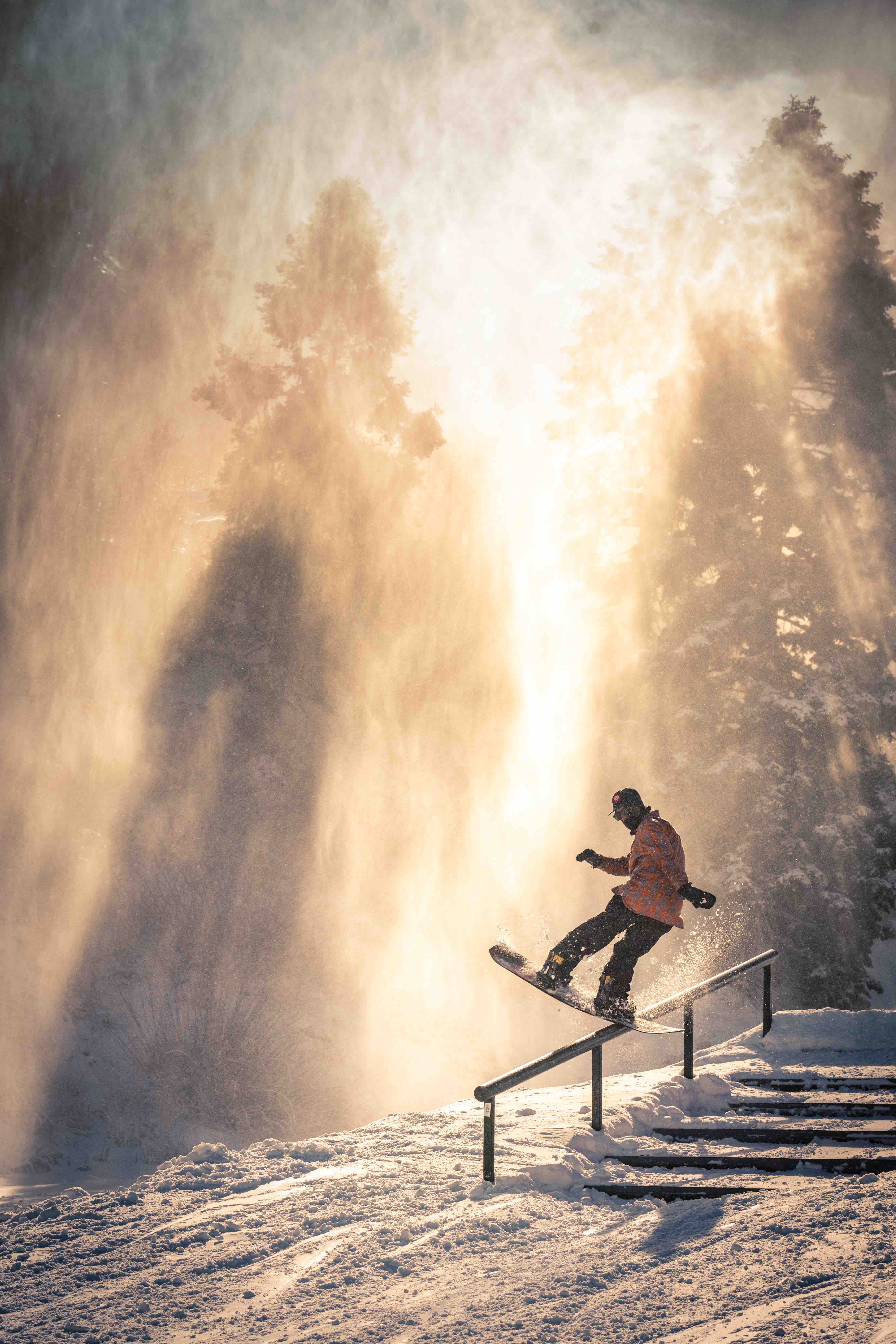 Just 75 miles west of Denver, Copper is a playground situated in the heart of the Rocky Mountains. Perhaps its biggest draw, though, are the Woodward parks. Designed as an action sports training ground, they boast some of the best facilities in the world, attracting some of the best riders as a result. If you’re looking to do your thing alongside the pros, Copper is a hotbed. 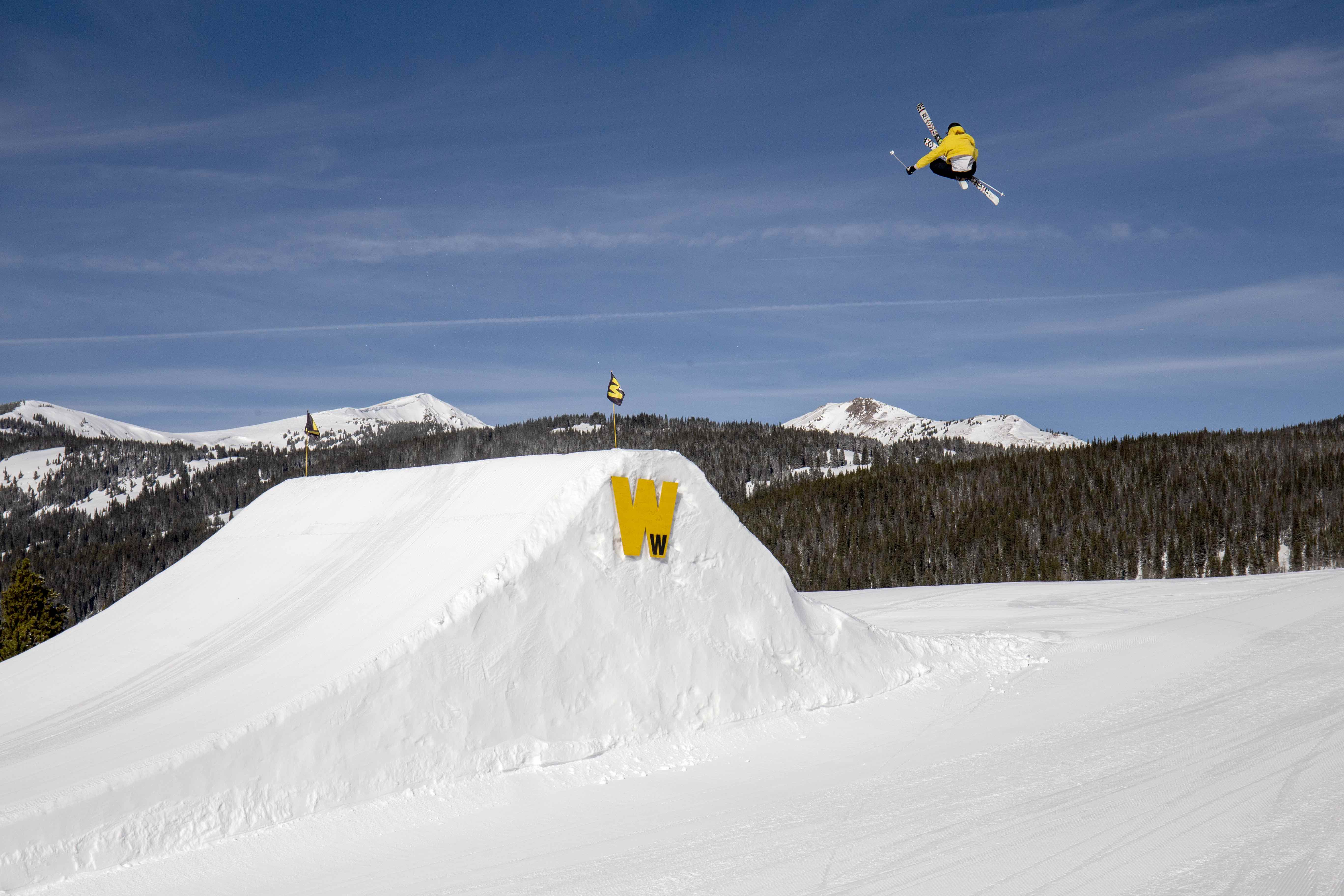 Ask anyone familiar with this destination and they’ll tell you: life is lived big at Big Sky. With over 5,800 skiable acres and 4,350 vertical feet, they’re all about unrivalled space. Naturally, they have a host of terrain parks to choose from, but the pick of the bunch is The Cache: a park built from entirely natural features like stumps, trees, rock banks, and good old fashioned ingenuity.

It’s the only Canadian pick, and it’s a blinder. Spread across the Niagara Escarpment, Blue Mountain is Ontario’s biggest and best, home to 42 trails. Their terrain park, the province’s longest, was designed by Arena Snowparks, a world-renowned design company who are responsible for some of the world’s best park development.

If you want to really test yourself, make your way to their ‘Badlands’ park, which – as its name will tell you – is a place where things to get big  Featuring a selection of jumps and rails that’ll entice any rider, it’s the perfect place to progress your skills. 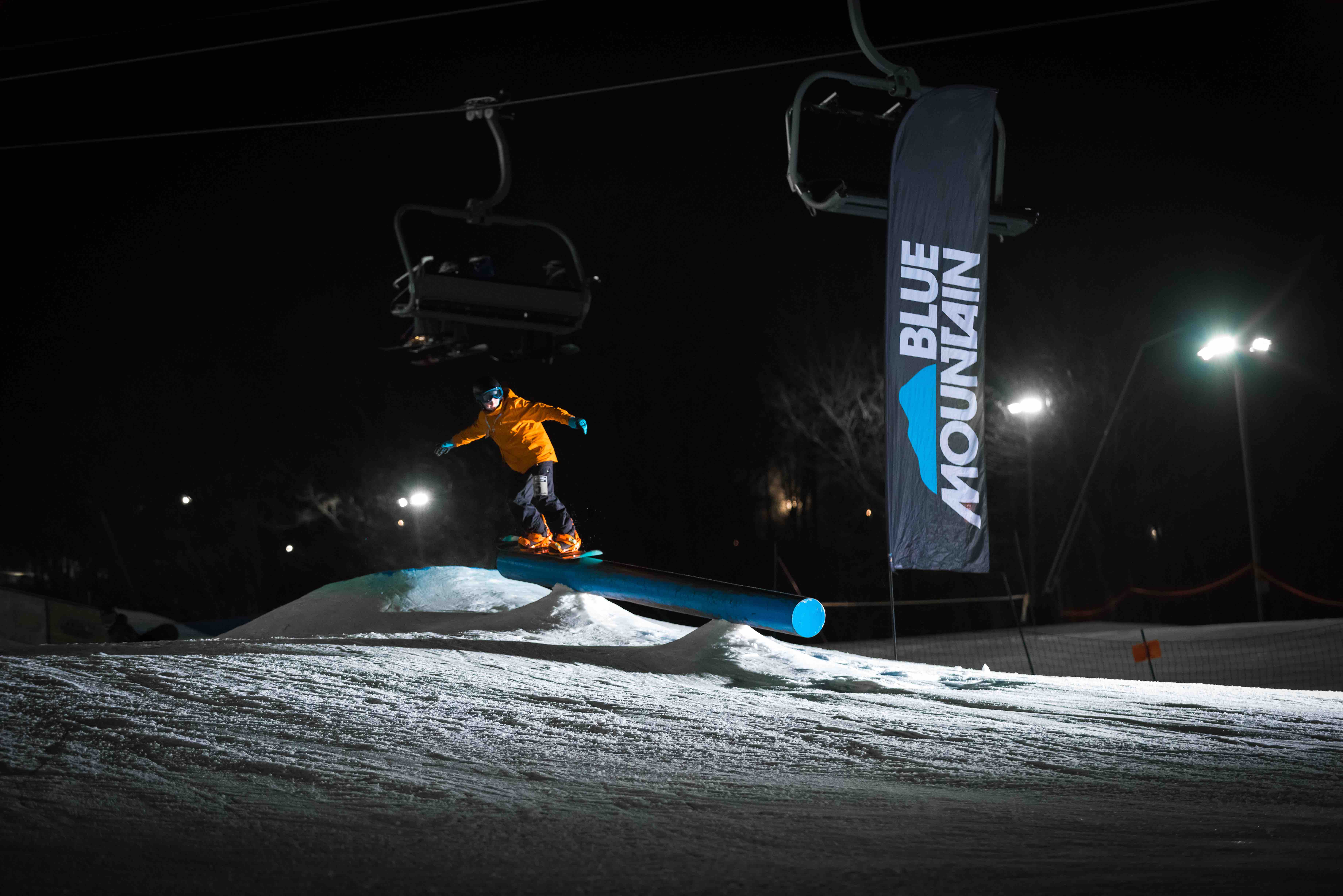 An interesting piece of American governmental folklore, Loon Mountain Resort was the brainchild of Sherman Adams, the former Chief of Staff to President Dwight D. Eisenhower who was forced to resign in 1958 following a scandal involving an expensive vicuña coat (though that’s another story).

Opening for business in 1966, the resort provided a much-needed boost for the neighbouring town of Lincoln – Adams’ home – which faced an uncertain future in the midst of a dwindling logging industry. Today, it’s that heritage has evolved into the home of New Hampshire’s best terrain parks, with 370 skiable acres and 6 distinct parks, each built to progress your riding to election – or competition, rather  – winning heights.

One of the most impressive aspects of Loon’s robust park scene is the emphasis on safety and etiquette. Through their participation in the PEEPS Pass program, riders are encouraged to learn how to ride smart and stay safe, all while building style and progressing skills. 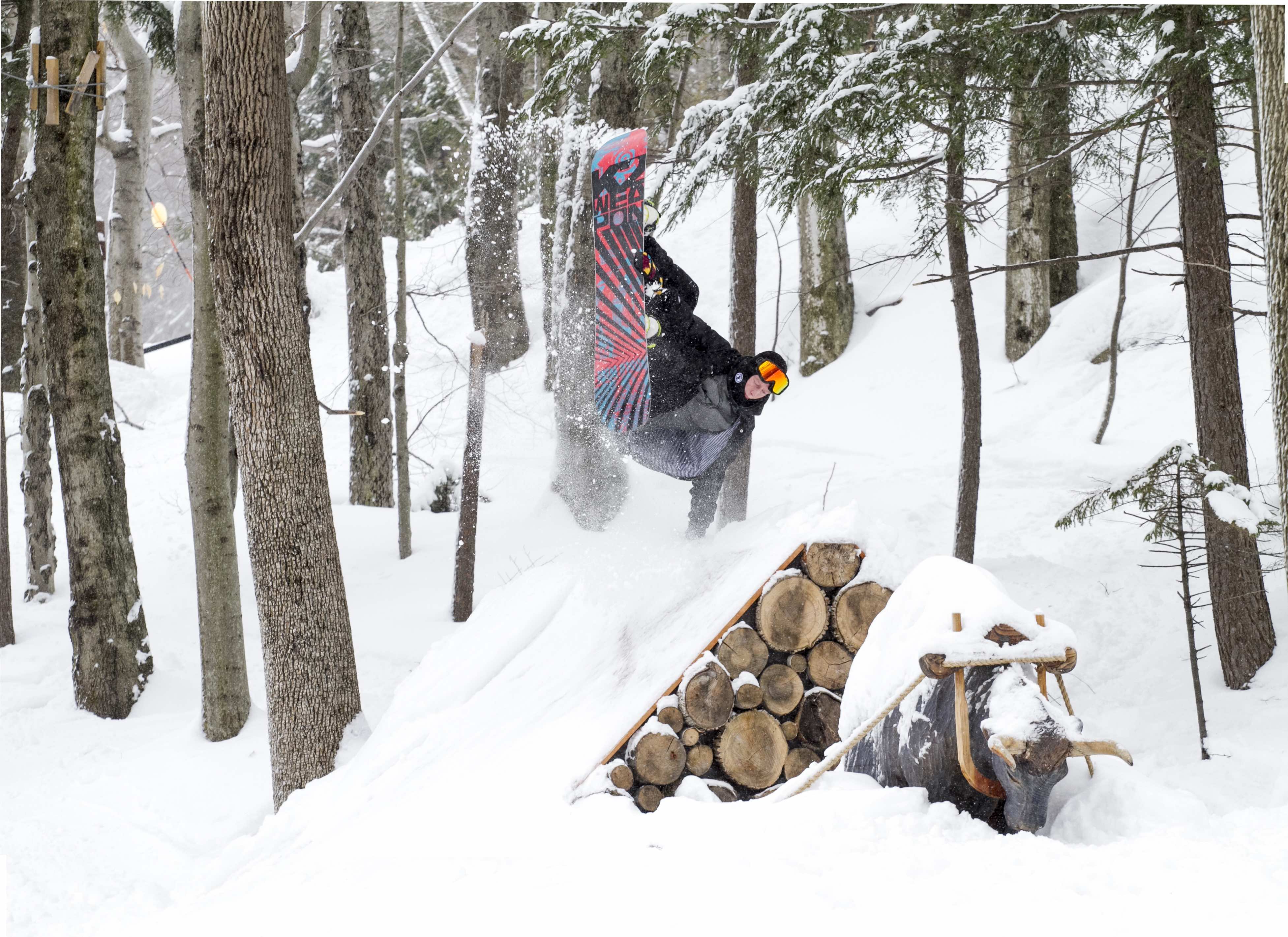 Get your Ikon Pass now.

Linkedin
RELATED ARTICLES
OTHER ARTICLES
Financial turmoil is pushing people who work in the sex industry into more dangerous and desperate situations as a means of survival.
Birdy Chu reflects on documenting the historic moment in which the territory was formally passed back from the UK to China.
Following the announcement of an 80% hike in the energy price cap from 1st October, crowds gathered outside the offices of energy regulator Ofgem to protest and declare their intention to undertake a payment strike.
With skyrocketing rents, packed out viewings, bidding wars and more, renting in London has never been harder.
Rhiannon Adam spent three months capturing an ageing society wracked by division, isolation, and the aftermath of scandal.
Sean Maung’s photos are a love letter to the Black and brown communities that make up New York.