We caught up with the UK rider to talk routines, run-ins with the police and why he thinks of the snowboarding community as one big happy family.

To mark his role in the latest First Layer film from Vans, we caught up with the UK rider to talk routines, run-ins with the police and why he thinks of the snowboarding community as one big happy family.

Sparrow Knox was 10-years-old when he first started snowboarding.

Inspired by his three older brothers and their collective, habitual tendency to try and out-do one another, the dry slopes very quickly became a de facto day care centre for the Knox family, as young Sparrow spent as much time as humanly possible honing and perfecting his craft. He hasn’t really looked back since.

The excitement for riding hasn’t dwindled, either. He’s 22 now, but the instinctive enthusiasm is still audible when he speaks. And, as one of the UK’s most talented young riders and star of the Vans EMEA snow team (“dude, they’re genuinely the sickest brand”), you can’t blame him for it. With a reputation that exceeds his years – and the best of them still ahead of him – it’s a good time to be Sparrow Knox.

Most recently, you can catch him, along with the usual suspects, in the latest First Layer instalment from Vans, which sees them exploring the vast unknown of Russia. Starting in Moscow before venturing out to Siberia, Sparrow was joined by the likes of Benny Urban, Will Smith, Antti Jussila, Sami Luhtanen, Nikita Sekh, Cees Wille and Kevin Trammer in a white-knuckle exploration of the region’s sub-zero urban jungles – which you can watch above.

In conjunction with the release of the short film, we spoke to Sparrow about his early inspiration, travelling the world and why, in his view, the snowboarding community is like one big, happy family. 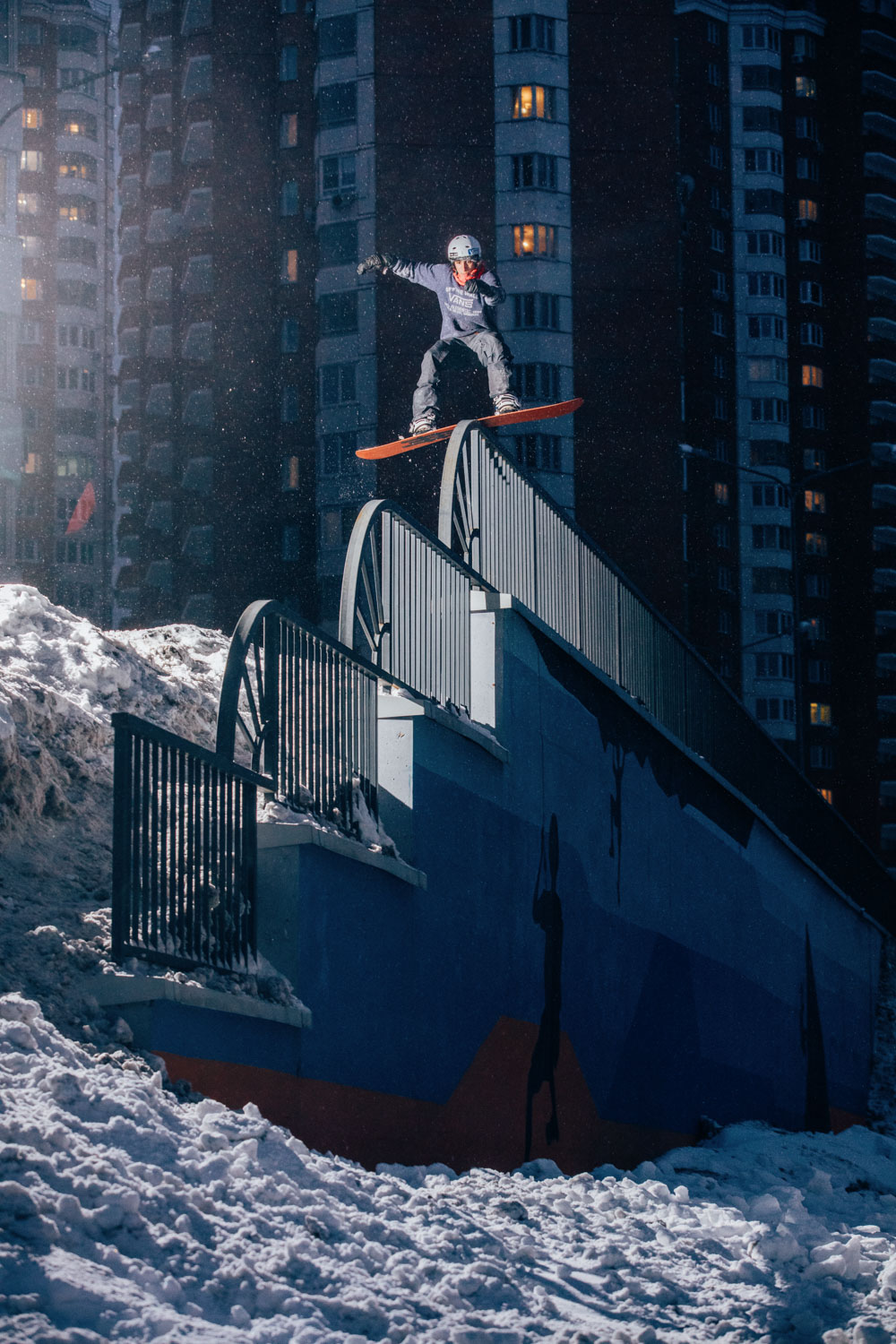 What was it that first drew you to snowboarding as a kid?
At that time, it was really just my brothers. We would always subconsciously push each other. If someone did an indy, you’d do the melon. If someone did the 180, you’d try the 180. I think more than anything – more than sponsorship, winning contests, making video parts – it was my brothers. We’d get each other so fired up.

Your parents must have been supportive.
Our parents were always super supportive. They’d let us bunk off school for a day if we needed to go to an event. Looking back, they were the golden days, man. Everyone was riding together, nothing was super serious. Not like it’s super serious now, but that was the one.

Can you bookmark the moment that snowboarding transitioned from a hobby into something you could do for a living?
The first time you can be sufficient and you don’t have to pay for any of your kit, and you’re given money to go on a trip – that was kind of the first time we realised it’s in our hands. 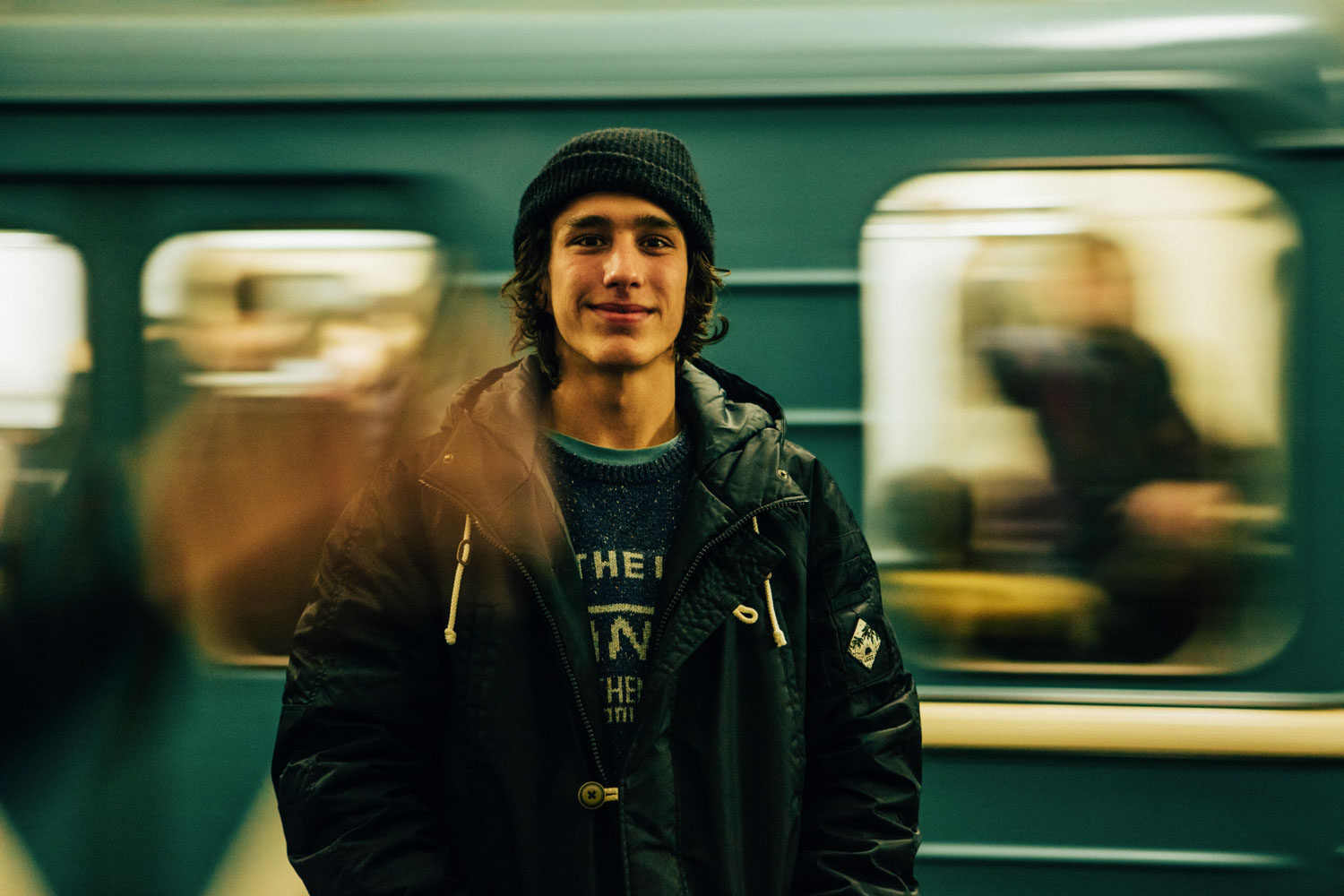 So, what does a standard day look like for Sparrow Knox?
A day in London, I will wake up, eat an amazing breakfast, cycle to the skate park, skate and see my family and my girlfriend. A typical day when we’re snowboarding, would be wake up as early as we can, drive around in the car – cos we do street snowboarding – trying to find interesting looking architectural design, thinks that look aesthetically pleasing and fun to ride. Shape it up, hopefully don’t get busted by the cops and try and get the best shots and the best video we can – while having the most fun.

You strike a nice balance between video and competitions. How do they compare for you?
So, a lot of people don’t like contests – there’s a bit of a ‘it’s too serious’ vibe going around. You know, with the big [competitions], there’s a lot of money on the line and you do have to train. But, the contests I do, like Rock A Rail and all the street contests, it’s just an amazing excuse to get loads of your friends together. No one really gives a shit who wins or loses, that’s just a bonus. It’s great to ride, because you get to see these people you might not see again for another year. That’s what I like best: it brings everyone together, no one is competitive, no one really cares. If you happen to win some cash, stoked. If not, you still have a great time.

Is it ever a disadvantage being based in London?
You’ve not got the mountain on your doorstep. But, that also does mean that if you get a five-day trip, or a 10-day trip somewhere, you really appreciate every day. I don’t think it’s an advantage, but given that it’s where my family’s from and I’m gonna continue living here, I just take it as it goes. It makes you appreciate being in the mountains much more. Or just in the street, if it’s somewhere with snow. 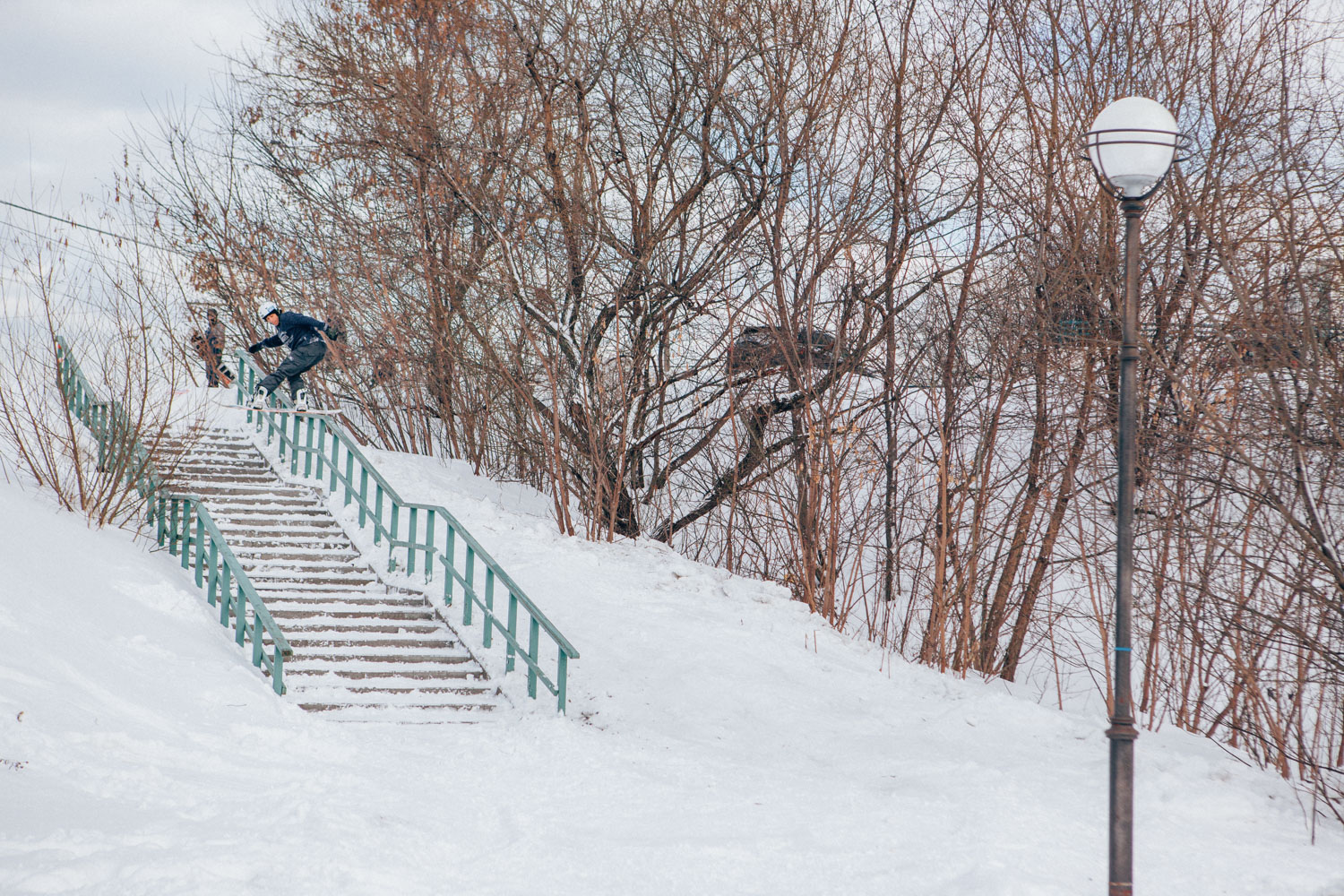 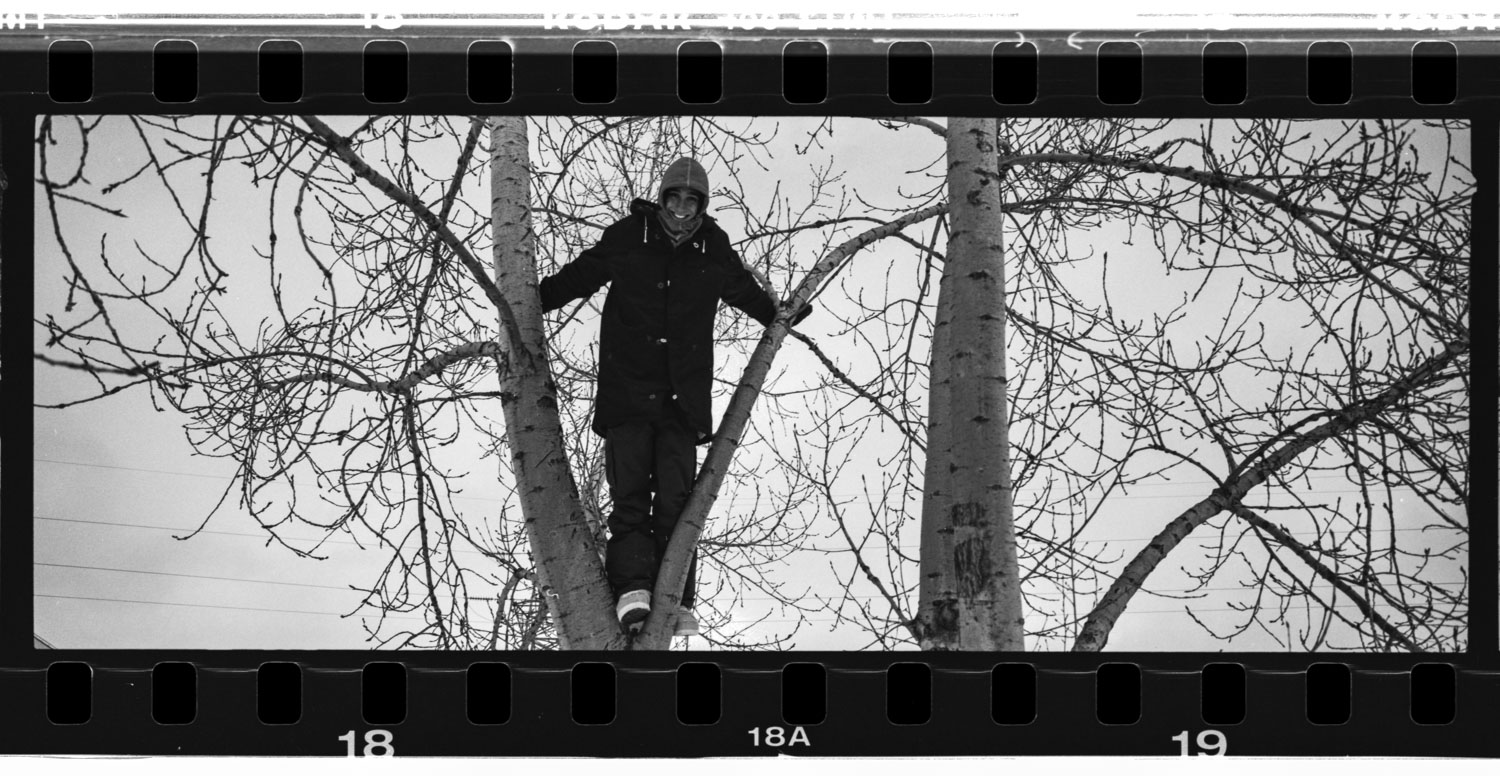 Travelling must be one of the best parts of doing what you do.
Dude, travelling is the best. This year alone we went to Russia twice, Morocco, France, Switzerland, Finland, Norway… I’m not even really that busy compared to some other dudes. It’s like you’re a tourist, but a kind of special tourist. You’re almost on the night shift. Everyone’s looking for one thing, you’re looking for the other. But travelling is the most beautiful part of it.

On the flip-side, what’s the most challenging?
The hardest bit is conditions, I think. You can plan a two-week trip and get rained out on the first day, then there’s six of you out there, you spent a couple of grand collectively getting out there, you’ve got all your kit there and then the weather can just change so drastically. So yeah, conditions and police. Convincing the police and security guards to let you ride when they don’t want to.

I imagine you get quite skilled at convincing authorities to let you ride.
Just be really nice. A lot of the time, they don’t really care. You just have to break them down. They know that you know that they don’t care – cos they don’t, man! You’ve just got to really be sweet and try not to get aggressive or angry about it. It’s only snowboarding in the end.

What’s the best thing about doing what you do?
Definitely the people. From first-timers who love it and are genuinely super enthusiastic, to the old-school vets who have been in the industry since before I was born. Everyone seems to follow a similar lifestyle of being friendly and looking out for one another. It’s like one big family. It’s rare you’d see anyone who would want to cut someone out or exclude them. You meet people and then you see them again three years later and they’ll still give you a big hug. 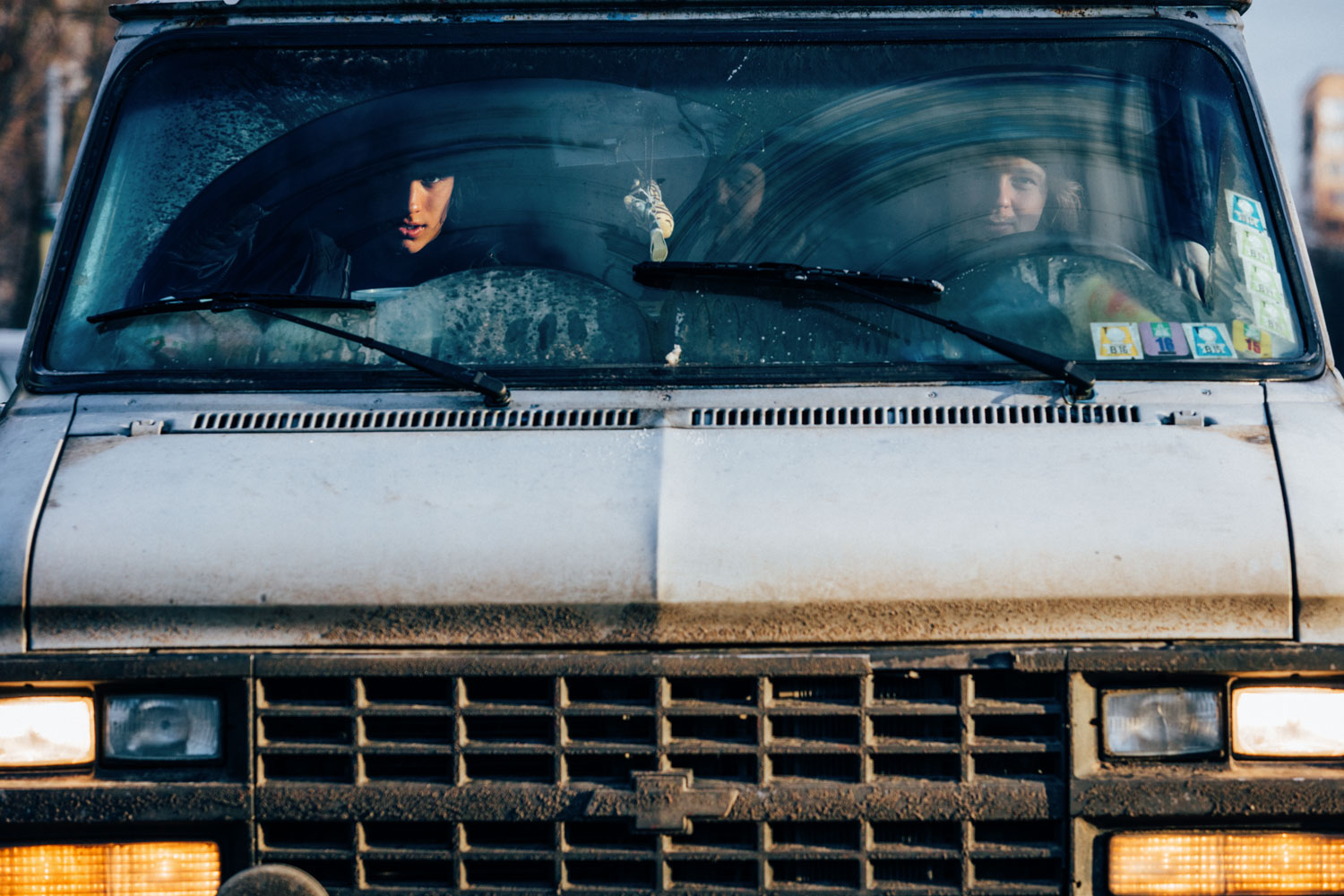 Linkedin
RELATED ARTICLES
OTHER ARTICLES
After fleeing the war in Ukraine, people are finding it impossible to secure affordable and decent housing in the UK.
Photographer Sean Maung reflects on documenting a small town in Pennsylvania afflicted by high levels of unemployment, poverty, violence, crime, and addiction.
Mass crustacean die-offs in the North East have led a community of fishermen to take action to save their seas.
The first-generation graffiti artist reflects on the tagging’s emergence as an art form and the players who pushed the medium forward.
A new podcast is opening up the conversation between trans women and trans amorous men in the hope of building coalitions.
Campaigners reflect on what the supreme court’s decision to allow buffer zones in NI means for the future of reproductive rights in the UK.