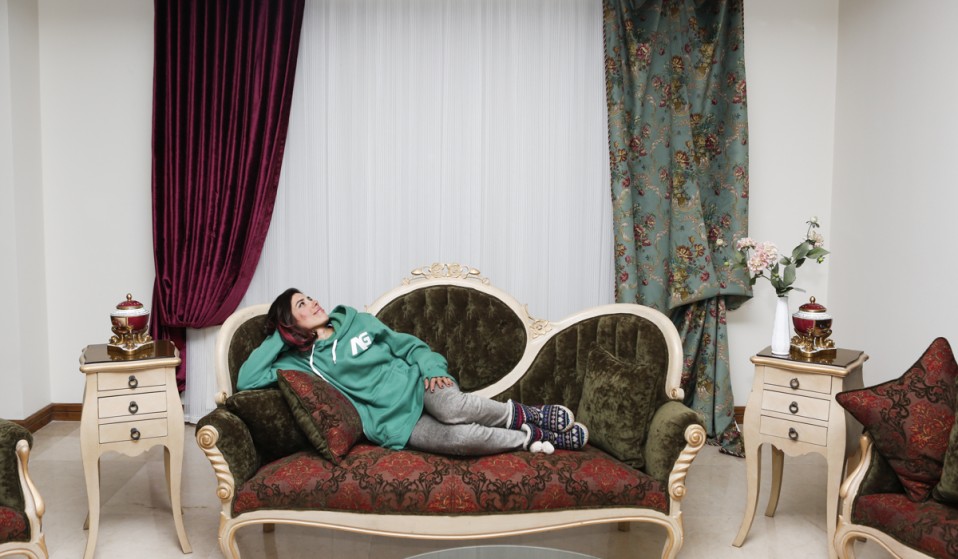 Skiing may have arrived in Iran as early as 1938, but it's female snowboarder Mona Seraji in the year 2015 that's having the biggest cultural impact on the conservative country.

Skiing may have arrived in Iran as early as 1938, but it's female snowboarder Mona Seraji in the year 2015 that's having the biggest cultural impact on the conservative country.

When, at age fifteen, Mona Seraji’s skis fell off the roof of her car and onto the snowy North Tehran mountains, she had no idea the incident would change her life.

The fall left the skis broken and Mona decided to end the season there. It was late April and the good snow was over anyway. But the following summer, on a shopping trip to buy new shoes, she ended up buying a Rossignol snowboard instead of the high heels she’d originally had in mind. It was an impulse buy – after seeing this “new thing” making a few shy appearances on the slopes – and the start of a surprising journey. “When I started, snowboarding was quite unconventional for women,” admits Mona. “There was very little awareness. It was like breaking down a cultural barrier.”  Skiing actually arrived in Iran in 1938, with two German railway engineers, and resorts popped up soon after with the most popular, Dizin, established in 1969. Snowboarding came later, as it did to the rest of the world, and it was equally as unpopular, at first. But Mona was hooked and in 2008 she quit her job as a designer and committed to it full time. “I became the snowboard ambassador for Iran,” she says proudly, “and at the time, people would say to me, ‘Wow, you have mountains in Iran?’ They had no clue we could ski here, especially women.”

It was, in fact, another strong woman who inspired Mona to keep pursuing her dreams. As hyperactive as the famous Iranian cartoon character Zebel Khan, Mona’s mother transmitted her love for adventure to her children, who turned it into a lifestyle. While Mona became a snowboarding icon in Iran, her brother explored Iranian off-roads in a 4×4 – recently travelling 1,200 km trip across the Lut desert, ending up in spots two-days away from emergency helicopters. “Freedom is not about what you wear,” says Mona. “It’s about choosing what to do with your life.”

Although Iranian women are not as restricted as nearby Saudi Arabia, the country’s gender relations often make headlines, most recently with reports of vigilante attacks on women who don’t conform to religious dress codes. But the media should seek more balance, says Mona. “I know bad things are happening, but honestly not as much as they say. Bad news grows much faster than good news,” says Mona. “Women’s bodies have always been an issue, in every society, whether it’s through advertising or by forcing them to cover up. To me it doesn’t make any difference. Being a snowboarder in Iran gives me the chance to forget about gender and practice with girls and guys at the same time without caring about sexuality. When I am in the mountains I’m really free to wear whatever I want and I’m definitely not afraid of getting caught for whatever reason. I earn freedom by hiking in places where not a lot of people manage to. Nothing can stop me from following my passion.”

Mona qualified in the late 2000s – as an international snowboard instructor, children’s instructor and coach – while teaching and competing nationally under the colours of Burton. And now she’s ready to pass that experience on. “I am now thirty-three years old,” she says. “I did enough as a half-athlete and I’m thinking about the future of the sport now.” While hitting the slopes, Mona is on the lookout for a young girl she can train for the 2022 Olympics. She even worked as a consultant for the Iranian Ski Federation for the past two years but found they were quite close-minded. “They should organise competitions for the younger generations,” she says. “But they are only investing in racing – not in freestyle.” Last year, the first female skier from Iran did qualify for the Olympic Games, but Mona believes in the potential of freeride as a medium for positive social change. Why? “Because it’s a lifestyle synonymous with freedom and self-expression,” she says. “The snow does not discriminate.”

That’s a message that Mona wants to promote to her country. Last year, after a serious back surgery that left two metal spindles in her spine, Mona went to the Southern Iran islands of Kish to get some rest. There, by coincidence, she met Benoit Goncerut and Arnaud Cottet, two Swiss extreme riders who initiated the project We Ride In Iran. She shortly became their Iranian coordinator along with Amir Raiszadeh, a local entrepreneur and ski lover who owns two cafes in Dizin. Like Benoit and Arnaud, Mona believes that the current challenges of the sport are not about going higher or steeper, but about developing it in the least expected places. Afghanistan, Kashmir and Angola are on their list. In Iran they organise freestyle competitions, digging kickers and training a group of young riders to international comp standards. They call everyone “Dadash” – the Farsi equivalent of “Bro” – and teach them the tricks of the trade so they can make it on their own in the coming years and teach each other.

As Mona gets older she’s taking all that she’s learnt in the snow and applying it to other areas of society. Last summer, she was among the few women who went surfing in the tense province of Sistan-Baluchistan, at the border with Pakistan. “Everyone thought we were crazy, and most still do,” she jokes. The one-week workshop was coordinated by her with the help of the organisation Waves of Freedom, led by Irish surfer Easkey Britton, and got turned into a documentary by French director Marion Poizeau. “Worldwide, the reaction was extremely positive,” says Mona. “We managed to tell a story that conveys such a counter-stereotypical image of how people perceive Iran, surfing and women. It was so different than what we are used to reading in the media. We provoked a big shock.”  Resolved as ever to her mission to improve gender-related issues in Iran, Mona will also participate in the first women-only winter expedition on Mount Damavand this March. “Mount Damavand culminates at 5,610 meters and is considered one of the most difficult peaks for winter climbing,” Mona says, while blasting Snoop Dog and Rebelution in the car on our way back from the slopes. “There is no time to be bored in a world as beautiful as this,” she says. “The mountains keep me sane.”

Linkedin
RELATED ARTICLES
OTHER ARTICLES
Wealth inequality and the rising cost of socialising is placing a strain on people’s relationships, reports Eve Upton-Clark.
For decades, an area of East London has served as a community hub for Vietnamese people looking for a taste of home.
A new edition of a seminal book brings together iconic images of the band onstage in their full glory and backstage in moments of unguarded camaraderie.
The last few years have seen an increase in LGBTQ-led initiatives to feed the hungry, with many finding ways to stay afloat despite the challenges.
In the wake of the decision by the supreme court to overturn Roe v Wade, thousands of protestors filled the streets to express their rage and anguish.
In the latest instalment of Photographers in Conversation, the chronicler of raves, protests and beyond explains why he’s drawn to such specifically visceral environments.