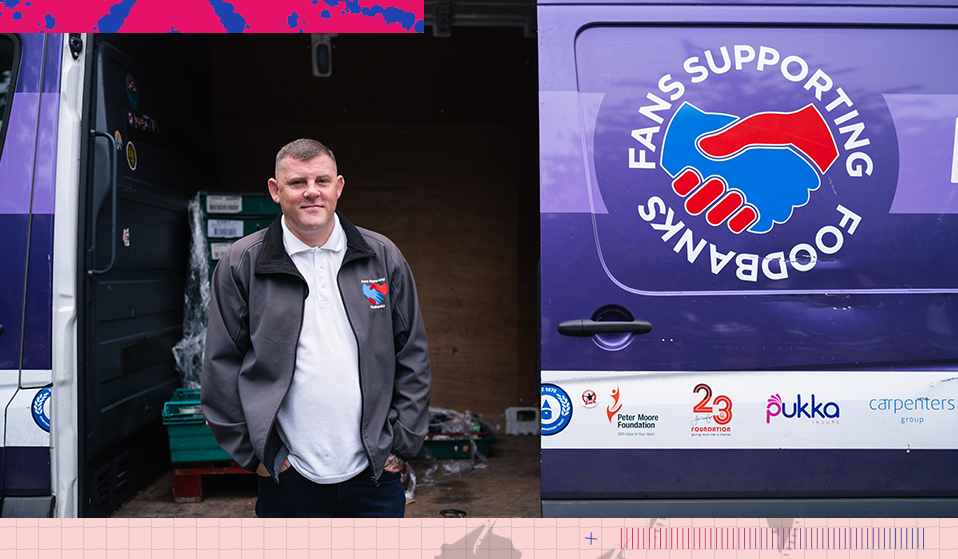 In this instalment of Common Goal, we spotlight a joint initiative between fans of Liverpool and Everton FC, who have come together to battle hunger in the city they share.

Common Goal is an editorial series created in partnership with EA Sports and FIFA 22. In this instalment, we spotlight a joint initiative between fans of Liverpool and Everton FC, who have come together to battle hunger in the city they share.

UK football fans have gained something of a bad reputation over the years. But Fans Supporting Foodbanks, an initiative founded in 2015 by Liverpool supporter Ian Byrne and Everton fans Dave Kelly and Robbie Daniels, is on a mission to change that narrative by using football as a conduit for something overwhelmingly positive.

The joint initiative between Everton and Liverpool supporters was set up to mobilise fans to donate food to communities bearing the brunt of austerity. While two supposed rival clubs, this isn’t the first time the teams have come together for fan activism: their mutual support in the wake of the 1989 Hillsborough disaster showed the power of unity and collective action that still lives on today. It’s a message encapsulated by their slogan – “Hunger doesn’t wear club colours” – and their logo, which shows a red hand and a blue hand, clasped together in a display of solidarity.

Collections are organised for before matches, with a food van usually parking up outside the stadium. Last year, Byrne estimated that the group was responsible for 30 to 37 per cent of all food supplies in the city. Considering that in 2020/21 approximately 2.5 million people used a food bank in the United Kingdom – over 600,000 more than the previous year – it’s clear that this initiative is more vital than ever.

Steve is a volunteer with Fans Supporting Foodbanks. His parents died when he was young, which ultimately led to his addiction and mental health issues. Because of his drinking, he lost his children, and he says that life became “unmanageable”. He moved from Kent to his hometown of Liverpool, where he was homeless and spent time in and out of rehab. 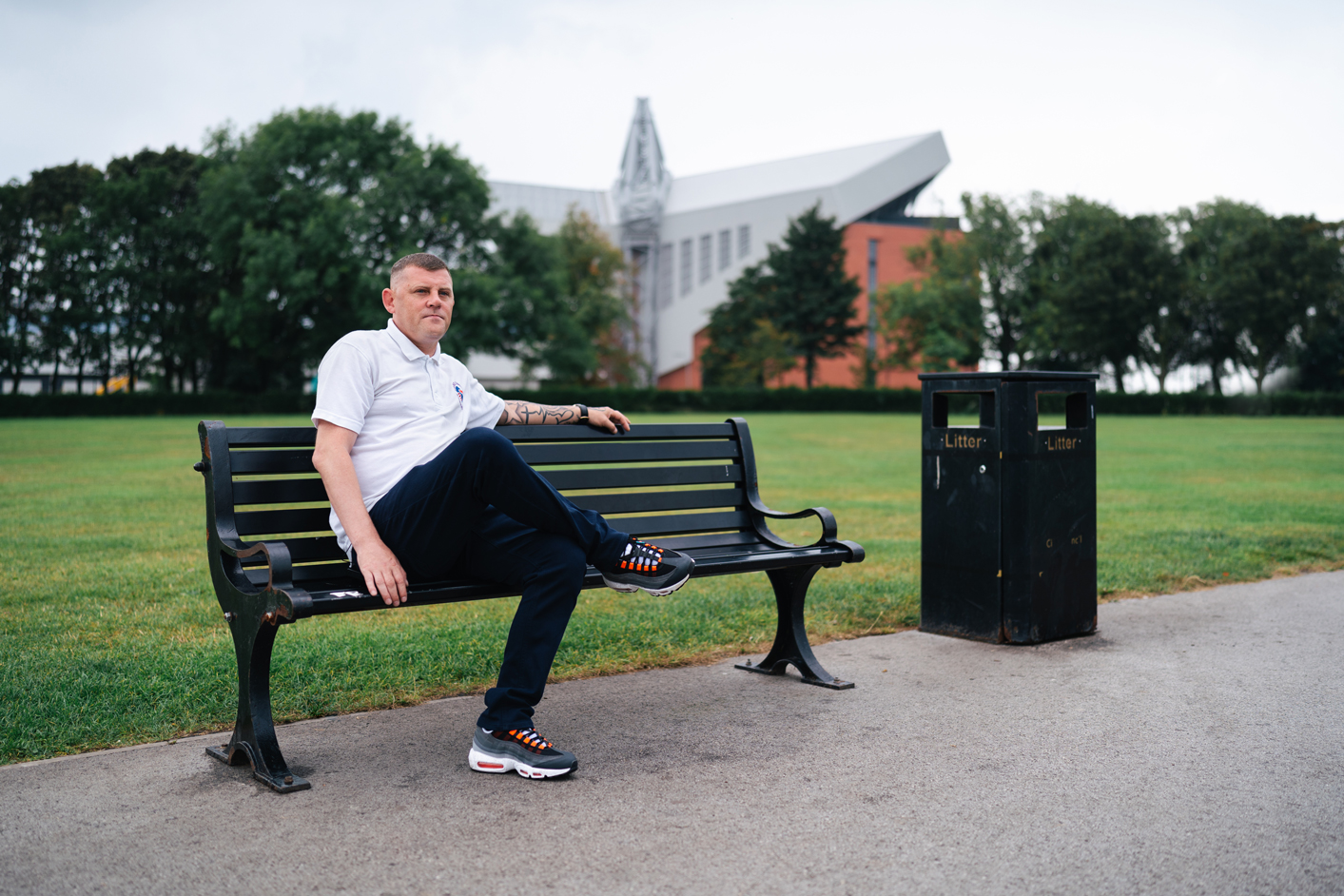 He remembers having very little to eat, but says he only visited food banks on a few occasions, because of the stigma of queuing up and the shame he felt. However, it was the kindness of a stranger at one of those food banks that provided the catalyst for him turning his life around, encouraging him to sign up to volunteer with North Liverpool Foodbank.

Steve first became aware of Fans Supporting Foodbanks when Kelly and Daniel contacted North Liverpool Foodbank about food donations. An ardent Liverpool supporter, Steve decided to get involved with the initiative, starting with them on their first collection six years ago. He was invited back, and started to volunteer regularly – something he feels changed his life for the better.

The experience of Fans Supporting Foodbanks was unlike other foodbanks Steve had been to. There’s often music playing, people hanging out and the excitement of the match in the air, which makes the experience less daunting for some. “It’s very informal. You get your regulars, we make everyone feel at ease, and we have a bit of banter with them,” he says. “We don’t judge or discriminate against anyone.”

“We get fans from all walks of life, of all ages,” Steven continues. “We had a kid as young as nine spend all his money on food to donate to the food banks … It’s about solidarity in this city.” 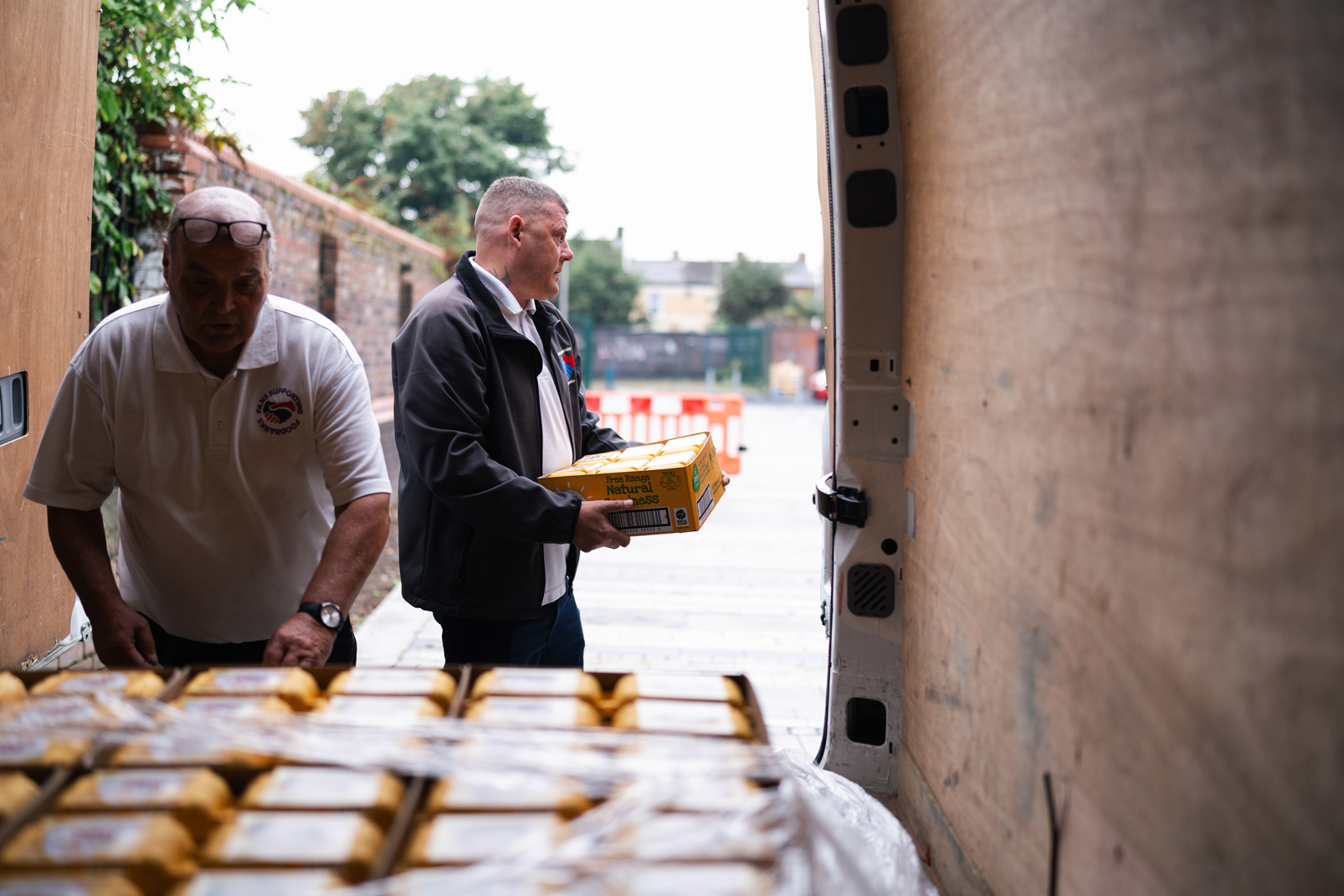 Steve says that the social atmosphere Fans Supporting Foodbanks fosters means he’ll often talk to clients about their issues and help them with problems outside of the foodbank. “There’s a laptop in the van with WiFi, so we’ll sometimes help people if they’re having issues with Universal Credit, and things like that,” he explains. Because of his experience with treatment centres during the throes of his addiction, Steve says he is able to point customers towards where to get help, and give them referrals.

This sense of community – a sharing of knowledge, skills and experience – runs through the organisation. A customer of the foodbank now lends her abilities as a hairdresser, offering cuts to customers every Friday morning. Another customer, who suffers from a disability, has set up a mental health group at the foodbank.

It’s a heartening display after what has been a difficult year. Because the pandemic meant there were no fans at the matches, Fans Supporting Foodbanks had to rely on donations from fruit and vegetable wholesalers and other companies with surplus food. “The amount of food was affected, there was a shortage of lots of things,” explains Steve. “I don’t think people realise the amount of food that comes from the fans. It wasn’t until the pandemic that people saw just how important the fans really are.”

After a year where so many saw their livelihoods devastated, Steve is expecting to see more and more people using foodbanks. Research has found that the planned cuts to Universal Credit will see 1.5 million working people face hardship over the winter, with 600,000 – one in four working claimants – reporting that they will struggle to afford basic necessities. 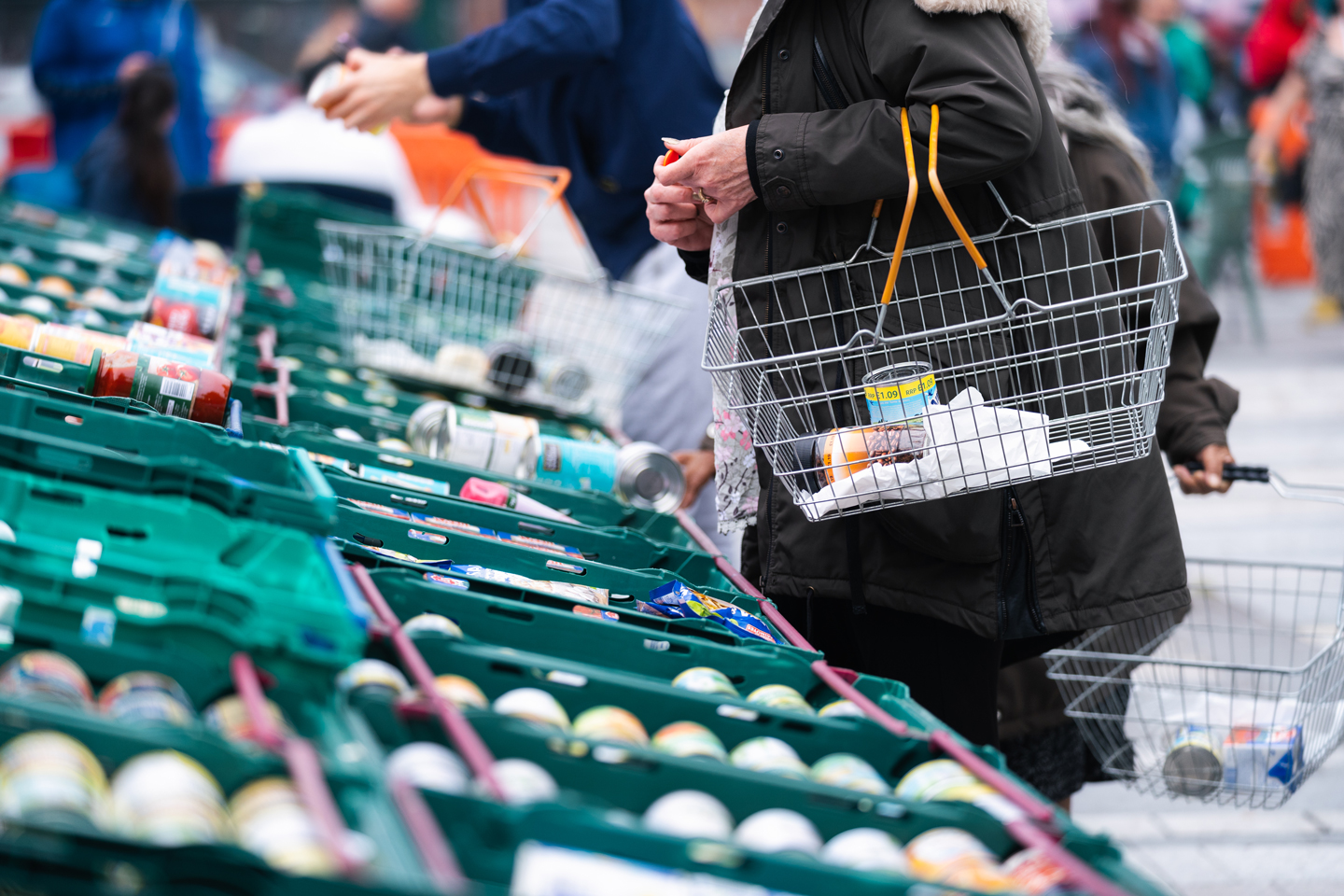 There has, thankfully, been increased attention focused on the issue of the UK’s food poverty – thanks in large part to Manchester United footballer and campaigner Marcus Rashford. “Marcus Rashford has opened the eyes of people who didn’t want to acknowledge that food banks were there,” says Steve. “He’s done a lot, we’re seeing more people use food banks because of him.”

Steve’s hope is that society can move past the point of needing food banks in the first place. “I’d rather us not have to do it,” he says, frankly. For Fans Supporting Foodbanks, this will start with continuing to raise awareness about food poverty, just as Rashford has done, particularly among other football clubs – some of whom are  “still quite ignorant,” according to Steve.

Crucially, it’s about recognising just how much fans can do when they come together. “They say that football is nothing without fans,” says Steve. “People don’t realise what power fans actually have.” 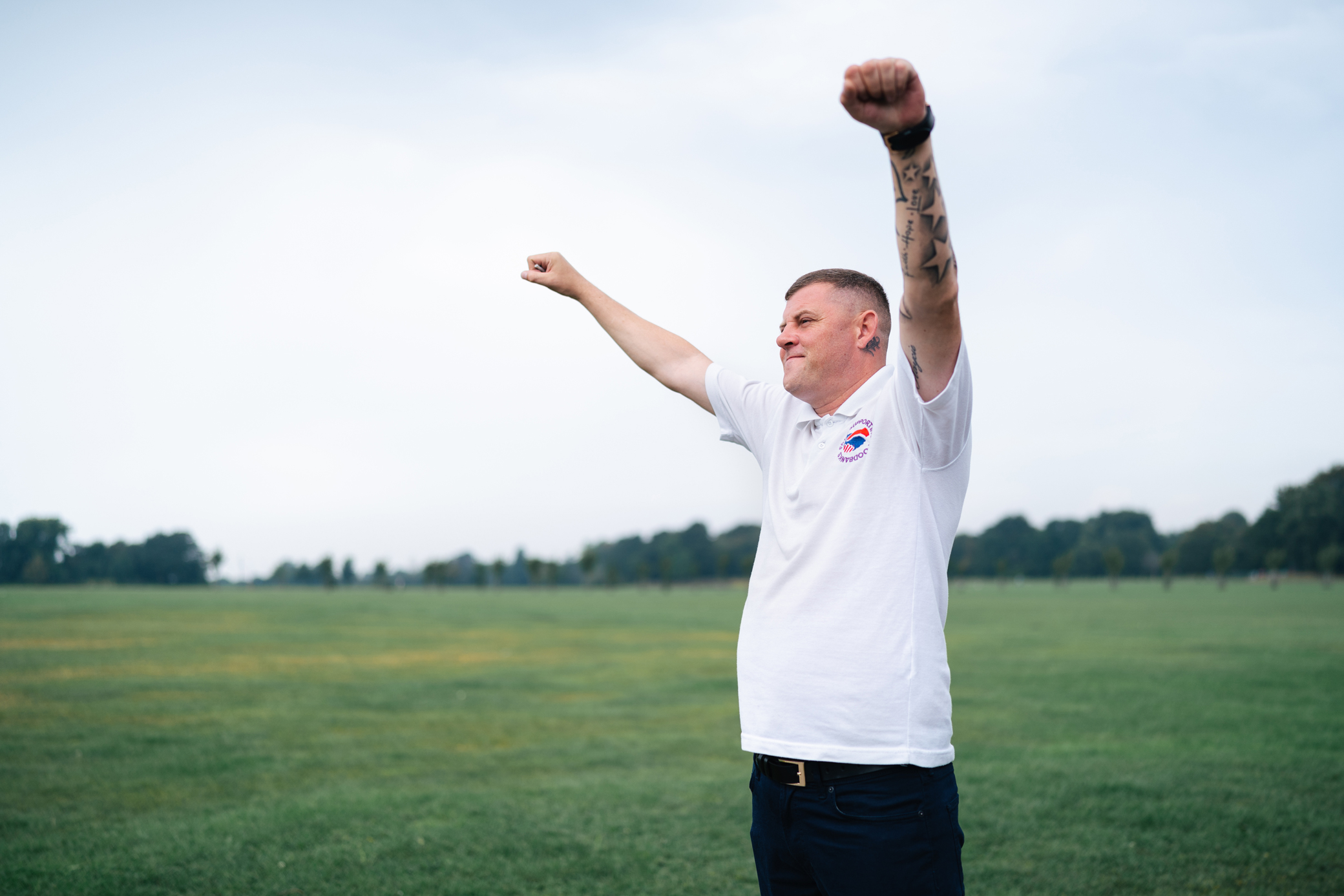 Are you ready? FIFA 22 is available now.

Linkedin
RELATED ARTICLES
OTHER ARTICLES
A group of young Palestinians have found temporary freedom in the act of parkour, reimagining wreckage and ruins as a series of high-octane playgrounds.
Cindy Campbell recounts how her brother ushered in a new era of musical culture at a party she held in the Bronx in ‘70s.
The idea that a younger generation is abandoning work has become a popular narrative online, but it doesn’t necessarily reflect reality.
Following the announcement of an 80% hike in the energy price cap from 1st October, crowds gathered outside the offices of energy regulator Ofgem to protest and declare their intention to undertake a payment strike.
Yesterday thousands gathered outside Buckingham Palace after news of the Queen’s death broke.
Financial turmoil is pushing people who work in the sex industry into more dangerous and desperate situations as a means of survival.