Outdoor / Sport / Inside the wild world of college cheerleading 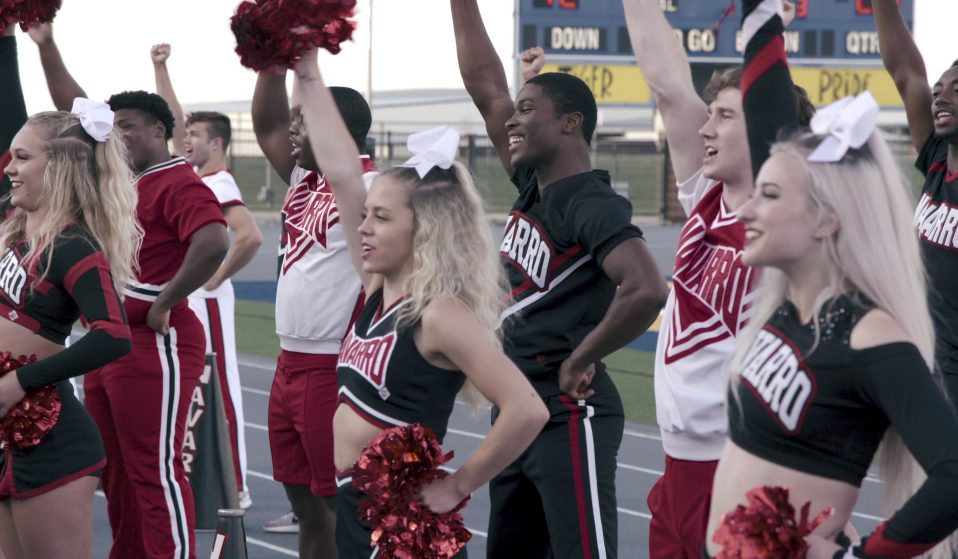 New Netflix series Cheer is filled with high stakes stunts and drama – but it can also teach us a lot about America’s class problem.

New Netflix series Cheer is filled with high stakes stunts and drama – but it can also teach us a lot about America’s class problem.

“Cheer’s generally a sport for really wealthy people,” says Lexi Brumback, a cheerleader at the esteemed Navarro College, in a sedate, Houston drawl. She sits on her bed, clutching a purple bear toy, her bleach blonde hair falling over her shoulders. “Mostly, these big-name gyms charge a lot and a lot of money for monthly tuition or competitions and uniforms. I’ve been in cheer for 12 years and I’ve never paid a single dime.”

Brumback is one of the cheerleaders featured in Netflix’s new docuseries, Cheer, which follows the lives of junior college-level athletes at an elite cheerleading course in Texas. Directed by Greg Whiteley, the creator of Last Chance U, the series tracks the team’s journey to Daytona, Florida for the National Cheerleading Championships, as they build a complicated routine of acrobatics, gymnastics and dance. As they perfect the danger-defying stunts, we find out more about the athletes’ stories; including every frustrated cry, concussion and dislocated elbow.

Brumback is not your traditional cheerleader. While attending a cheer gym in Houston, instability characterised her teenage years: she dropped out of high school, ran away from home, got into punch ups, and even ended up with a charge for assault. And while Brumback clearly doesn’t conform to the pop-cultural ideal of the “All-American”, apple pie cheerleader, there’s something else that sets her apart: her lack of wealth.  In some states, the cost of cheerleading can be between $750 to $3,500 a year. As a result, it’s a massive industry  – estimated to be worth $2 billion – and one that has grown from 2.9 million participants in 2006 to 3.82 million participants in 2017. For the participants and their parents, the expenses can stack up.

“Competitive cheerleading has, I think, very much been associated with more affluent parents and their children,” Natalie Adams, author of Cheer: An American Icon, who features in the Netflix show, tells me. “It costs a lot of money to pay for gym fees, to travel, for uniforms, or for special help for your tumbling or stunts. And so yes, all of that comes with a fee. It’s not free.”

Not only is cheerleading not free, but it has little chance of a financial payout at the end. Unlike more conventional sports, there’s no career in it past your degree. Despite giving everything and their left elbow for the sport, these students can’t become professional cheerleaders (cheerleaders at the sidelines of NBA or NFL games are usually dancers), which means the hundreds of thousands of dollars put into the sport rarely pays out in a career – if that’s your hope.

There are other options: you can teach, for example, or you can monetise your brand, like prolific YouTube cheerleader Gabi Butler, who features in the series. But for cheerleaders from low-income backgrounds, without a big Insta following, it’s a risky investment.

That said, cheerleading shouldn’t be dismissed as a sport exclusively for the wealthy. Cheer is about the Herculean young athletes perfecting their routine for Daytona, and the documentary provides a unique insight into the class divisions within American society – where, in sport, “innate talent” competes with the intensive training that wealth can buy, throwing up a diverse set of athletes. There’s the “famous cheerleader” figure of Butler, who we see hanging out in her pool in Florida, alongside La’Darius Marshall, who spent most of his childhood in a foster home getting bullied by his brothers for being gay. Figures like Brumback have made it to the top against all odds, and others are willing to go to extreme lengths to fund it.

“Many families, for whatever reason, would make enormous sacrifices in order to pay for the cost associated with competitive cheerleading,” says Adams. “Taking out a second job, for example. When we were writing our book, [we interviewed] lots of parents who would take on a second job, work overtime and those kinds of things so that their child would have the opportunity to be on a competitive cheerleading squad.”

It’s finding out about those odd defiers – in an expensive sport like cheerleading – that makes Cheer so compelling. These people aren’t only good, they’re so good that they’ve overcome poverty, grief, and in some cases, sexual abuse. “I would say that the series is more typical than a lot of people think of cheerleading,” explains Adams. “You see people featured on there whose parents have made enormous sacrifices. I think that’s why it has spoken to a lot of people.”

It’s clear that despite the cost, the benefits are monumental for the kids without structure in their lives. Cheer is not just a story of elite athletes made of pure ab, it’s a story of the lifeline sports can offer. Indeed, for figures like Brumback and teammate Jeremiah Harris (a Novarro student who required a GoFundMe to continue cheerleading after the death of his mother), the sport offers a sense of purpose, community and education: “If I wouldn’t have came here,” says Brumback, as we find out more about her past, “I’d be sitting in a jail cell right now.”

Cheer – as a sports documentary with a juicy narrative arc and an unexpected story of purpose and salvation – will hook you. It is surprising how entertaining it is to watch the students nearly basket toss their way to death nine times in the space of two minutes. But it’s not just the thrilling stunts that make it fascinating, it’s the lens it offers into American society – where capitalism, community, and competition collide.

Linkedin
RELATED ARTICLES
OTHER ARTICLES
Photographer David Hoffman recalls documenting the extreme wealth inequality around Tower Hamlets and Hackney int the 1980s.
A new report has found that the majority of Britains approach trans issues with compassion. It’s about time this was reflected by our media landscape.
For decades, an area of East London has served as a community hub for Vietnamese people looking for a taste of home.
Whether it's partygate, the climate crisis or the spiralling cost of living, the fightback begins on the picket lines writes Tommy Vickerstaff
In her new book, the author explores the country’s housing crisis in human terms and calls for radical action to address a broken system.
50 years since its inception, and the campaign calling for recognition that capitalism depends on domestic labour is as pertinent as ever.