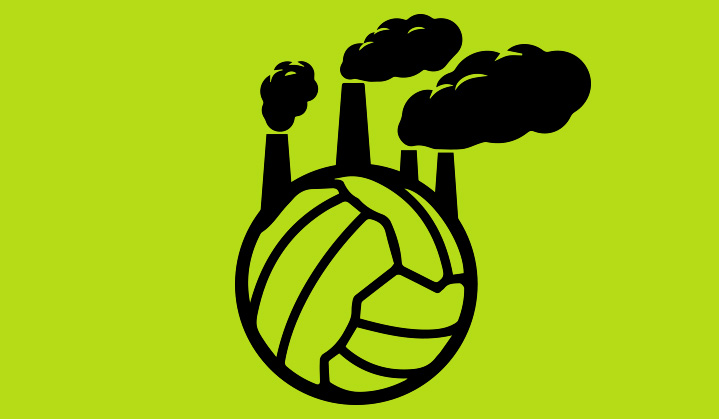 Football's impact on the environment continues to balloon but an increasing number of people involved in the game are trying to change that.

With the game only growing in popularity and excess, football's impact on the environment continues to balloon. But an increasing number of people involved in the game are trying to change that.

It’s a frosty morning in October and Dale Vince is explaining how he accidentally became the chairman of the world’s first carbon-neutral football club. “It was the summer of 2010. Forest Green Rovers was 120 years old, it was in our back yard and I’d been reading about its financial problems in the local newspaper,” Vince shares over Zoom, “I went to see the guys that were running it and they said they just needed a bit of cash to get through the next few months, so we helped them out and then it turned out they needed a lot more money.”

Sitting in his office, the environmental activist and founder of renewable energy company Ecotricity recalls with a wry smile, “It was a stark choice between taking responsibility for the club or seeing it fall over, so in the end, I thought ‘look, how hard can it be to run a football club?’”

A decade on from that summer, Forest Green is a club transformed. In 2017, the men’s team achieved promotion to the Football League for the first time in their history and now look well established in League Two with their intention to keep climbing higher. Attendances at home games have increased four-fold and plans for a new 5000-seater stadium have been drawn up. Most impressively of all, the club has garnered an international reputation as a pioneer of sustainability within the sport and achieved something truly remarkable in 2018 when it became the first football club in the world to be certified carbon-neutral by the UN.

“Once I’d taken responsibility for the club, I immediately discovered a whole bunch of things that needed to be changed from an ethical and sustainability perspective,” Dale, who the UN recognised individually as a Climate Champion, explains, “I quickly realised that to bring all the stuff that we believe in and work on at Ecotricity to Forest Green meant that we would in effect be creating a green football club.”

With an all-vegan team and catering menu, a stadium powered entirely by renewable energy, kits made of 50% bamboo fibres, and an organic football pitch fed by recycled rainwater, the club is proof that sustainable business practices can go hand in hand with sporting success. It’s a message that others in the industry would be wise to take heed of as like any other aspect of ordinary life, football is likely to be directly affected by climate change in just a few years.

9-months of planning & discussions of a shared vision for sustainablity in football & wider society.

So happy to have joined the @FGRFC_official journey. Loads more to come in the future to help our 🌏 #WeAreFGR

A recent report by Rapid Transition Alliance estimated that within the next three decades a quarter of English football grounds – including Chelsea’s Stamford Bridge, Fulham’s Craven Cottage, West Ham’s London Stadium and Southampton’s St Mary’s – will be at risk of annual flooding while rising temperatures are likely to make summer tournaments impossible in the not-too-distant future.

And yet, Forest Green’s remarkable efforts aside, it’s fair to say that for the most part, the sport has so far failed to reckon with its own impact on the climate. Rapid Transition Alliance’s report also estimates that the 2018 World Cup was responsible for a staggering 2.16 million tonnes of carbon emissions, and that’s without factoring in the building of stadiums for the event. Meanwhile, the World Land Trust estimated that last year’s Champions League final between Liverpool and Tottenham produced 8,693 tonnes of carbon – more than the entire city of Glasgow produces in a day – mostly as a result of the flights taken by English fans to Madrid, where the fixture took place. And with teams and spectators at next year’s delayed Euros having to fly between no fewer than twelve different host countries, it’s clear that sustainability remains a fairly low priority for UEFA and European football’s national governing bodies.

At club level, too, commitment to sustainability remains questionable, even with mounting pressure on teams in Europe’s top leagues to demonstrate their green credentials. Many clubs are all too eager to publicise their ‘wildlife corridors’, reusable pint glasses, and environmentally conscious waste management partners, but this can sometimes feel like greenwashing when top-flight teams still regularly find themselves embroiled in controversy for taking fourteen-minute flights to nearby away fixtures, and many of the sport’s elite sides – including six of the Premier League’s twenty teams – partner with airlines, car dealerships or travel companies as their main shirt sponsors.

As with virtually every major industry on the planet, there’s clearly a lot of work to do before football can be considered truly sustainable. Fortunately, there are plenty of groups beginning to tackle the problem.

Led by academics at the University of Pisa’s Institute of Management, TACKLE is a research project funded by the EU’s Life programme which aims to research and document best practices on environmental management in football, and guide their implementation across European football’s national organising bodies. “At TACKLE we approach the issue from two perspectives,” says project manager Dr. Tiberio Daddi. “The first we would define as operational actions, such as introducing solar panels, separate waste collections, or LED lighting. The second is governance, so for example appointing a sustainability manager. At the moment there are lots of clubs adopting operational changes that have an immediate result, but few clubs who have an environmental management role in their organisational structure. We’d like to see football clubs move towards a governance perspective, which will have more long term and far-reaching environmental benefits.”

This past May also saw the launch of Football4Climate, a programme founded by the Sport and Sustainability International (SandSi) which seeks “to drive climate awareness and action amongst the wider football industry.” With involvement from Norwegian midfielder Morten Thorsby, who plays for Italian side Sampdoria, PSG Feminin’s goalkeeper Arianna Criscione, and Juventus and Denmark midfielder Sofie Junge Pedersen, the initiative launched with a webinar to discuss the impact that the climate crisis will directly have on the game.

Meeting with the environmental minister of Italy @SergioCosta_min in Rome yesterday. Speaking about football and environment, and how football can contribute with education, engagement and concrete action. pic.twitter.com/BP7ivphRPd

The group is working on a carbon footprint calculator tool to support individuals and organisations within the sport in understanding their carbon emissions. “This is one of the resources that we really wanted to be able to offer because we want to work with players to help them to measure their own carbon footprint and then to influence their clubs to do this,” explains the project’s coordinator Marisa Schlenker, “We realise that players have a say and can internally influence clubs, and so we’re also thinking about educational resources they could use.”

They’ve also launched a Football4Climate fan club to encourage sustainably-minded fans of the sport to get in touch with their teams and encourage them to adopt key measures such as tracking and reporting their carbon emissions and signing the UN’s Sport for Climate Action framework. “If we can get fans to think about the climate and then put some pressure on their football clubs we think that can have a huge impact,” Marisa says.

And when eco-conscious fans are able to effect change in their club, their impact is manifold; as the most popular sport in the world, the football industry is in a uniquely powerful position to influence huge numbers of fans across the globe, as Dale has found on his decade-long journey with Forest Green Rovers. “We’ve found that football has been the most amazing way to engage with people on issues of sustainability. We talk about energy, transport, food; three big areas of life where carbon impact comes from – how we power ourselves, how we get around, and what we eat. We show our fans what we do as a club, and why we do it, and we hope that it percolates into their private lives,” Dale explains.

“We’ve seen it recently with Black Lives Matter, and with Marcus Rashford’s campaign for school dinners to be extended into the summer. Whether it’s social issues like these or environmental issues, footballers and clubs already know that they have a voice and a responsibility to speak out.” With everything to play for, let’s hope that they do.

Linkedin
RELATED ARTICLES
OTHER ARTICLES
LGBTQ+ students are keeping the spirit of the original Pride alive by fighting for liberation for everyone, not just their community.
In her new book, the author explores the country’s housing crisis in human terms and calls for radical action to address a broken system.
The author discusses the all-consuming nature of heartbreak, and turning the experience into an incisive exploration of love and loss.
Photographer David Hoffman recalls documenting the extreme wealth inequality around Tower Hamlets and Hackney int the 1980s.
Freddie Miller’s new series of photographs investigates who today’s trainspotters are and what drives their unfettered enthusiasm.
A new edition of a seminal book brings together iconic images of the band onstage in their full glory and backstage in moments of unguarded camaraderie.