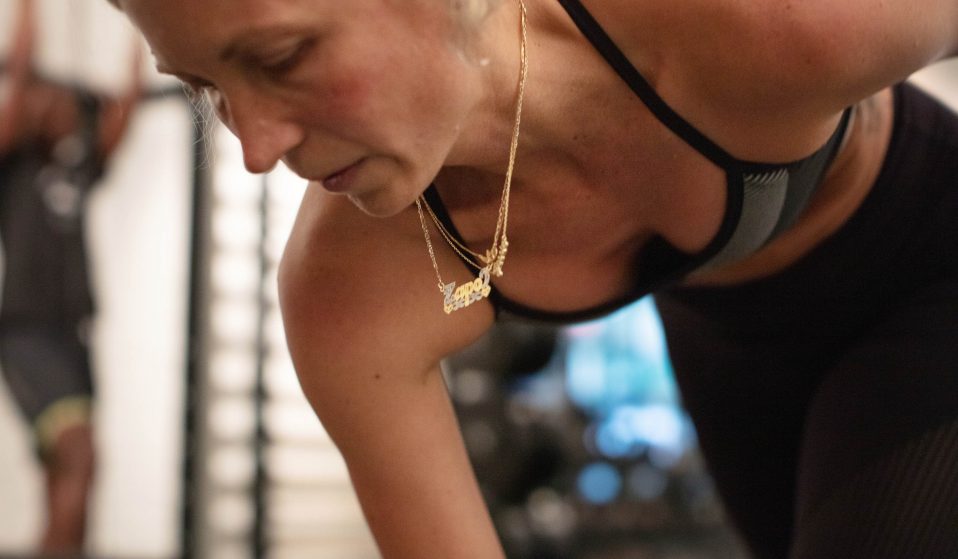 For Jessie Zapotechne, there‘s nothing more inspiring than running through the streets of New York. Even in the throes of lockdown, her work and the city remain intertwined.

For Jessie Zapotechne, there‘s nothing more inspiring than running through the streets of New York. Even in the throes of lockdown, her work and the city remain intertwined.

There is a stillness to Jessie Zapotechne. The creative arts therapist and runner is calm in a city synonymous with relentless dynamics.

“When I was fifteen, I had become very introspective, very closed,” she says, speaking after a pre-lockdown, pre-dawn, kettlebell class down in Little Italy. “Art as a way of communicating without words helped open me up. Running helped me realise that art and physicality can be intertwined and therapeutic in their own right.”

Jessie has resided in Brooklyn since 2003. Today, she’s something of a pioneer in NYC’s urban running culture. Through her involvement in a whole host of groups and initiatives – including adidas’ New York Runners crew – she’s helped build a community around running in the city. Up until the outbreak of Covid-19 and subsequent lockdown, it was as inclusive and far-reaching as it’s ever been. 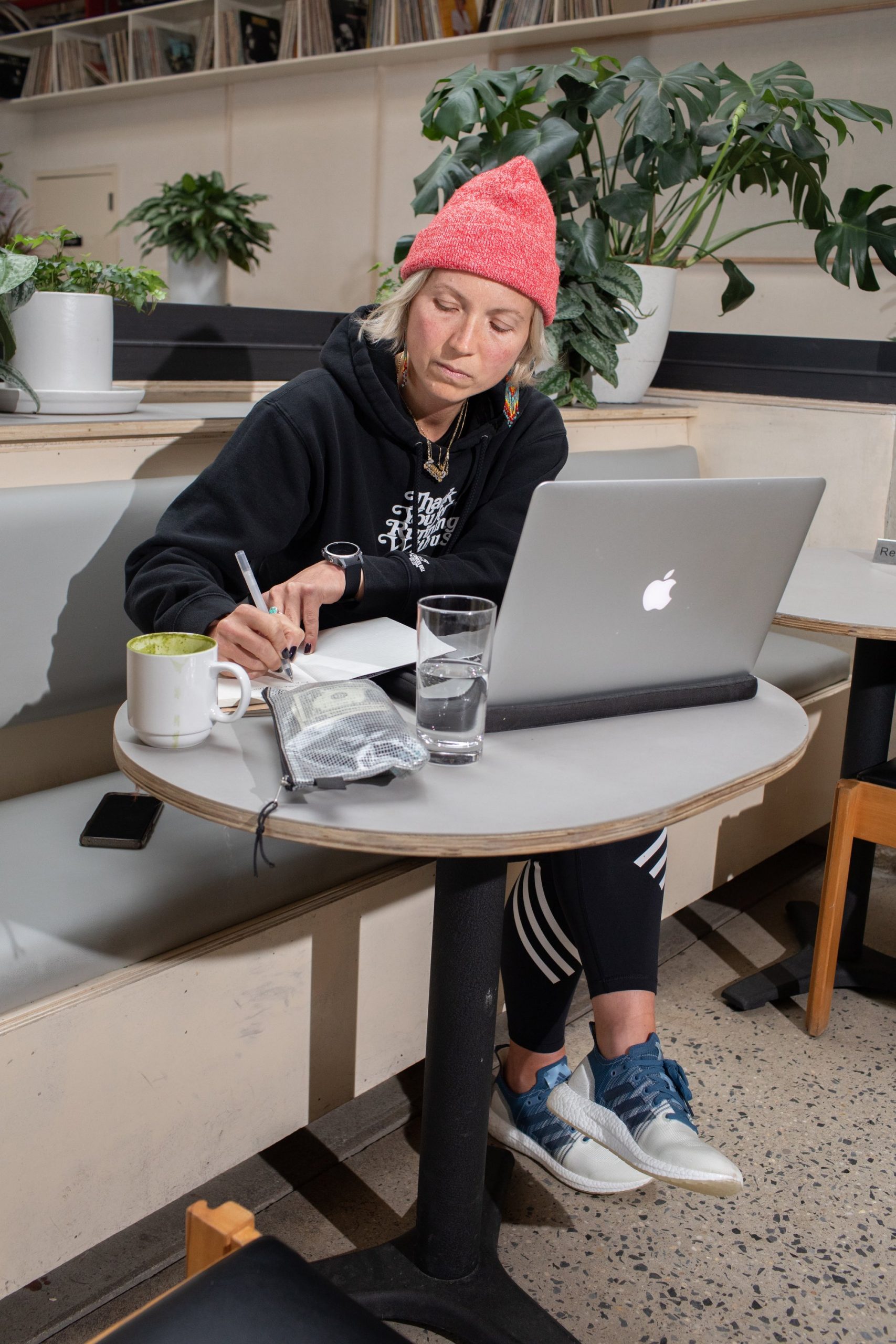 On top of that, Jessie is also one of 200 people involved in adidas’s [FUTURECRAFT.LOOP] project  — an innovative worldwide programme that prototypes completely recyclable running shoes. The idea is simple: you get a shoe, use it how you will, then give it back to be recycled in return for the next iteration. It’s an experiment on the macro scale; a move from one of the biggest sportswear brands on the planet toward a circular economy in the age of emergency.

Six months from when we originally met, deep in the New York wintertime, Huck caught up with Jessie via video call to discuss how she’s adapted to the challenges of the present.

What is it like being at the centre of a thriving running community in a locked-down New York City?
My working life has switched from building communities out there in the city to creating digital content and engaging our communities remotely. But there’s actually been a running boom here since the lockdown. People who have never been runners are running all of a sudden. I know how important running is to me, and that seems to be becoming a reality for a whole new group of people.

I want to give people tools and skills that they can take with them exactly for times like this. It’s a moment of challenge for people to learn self care, for people to be with themselves. It’s going to make them stronger. We will run in communities and in groups again, but I want them to always have running for themselves. 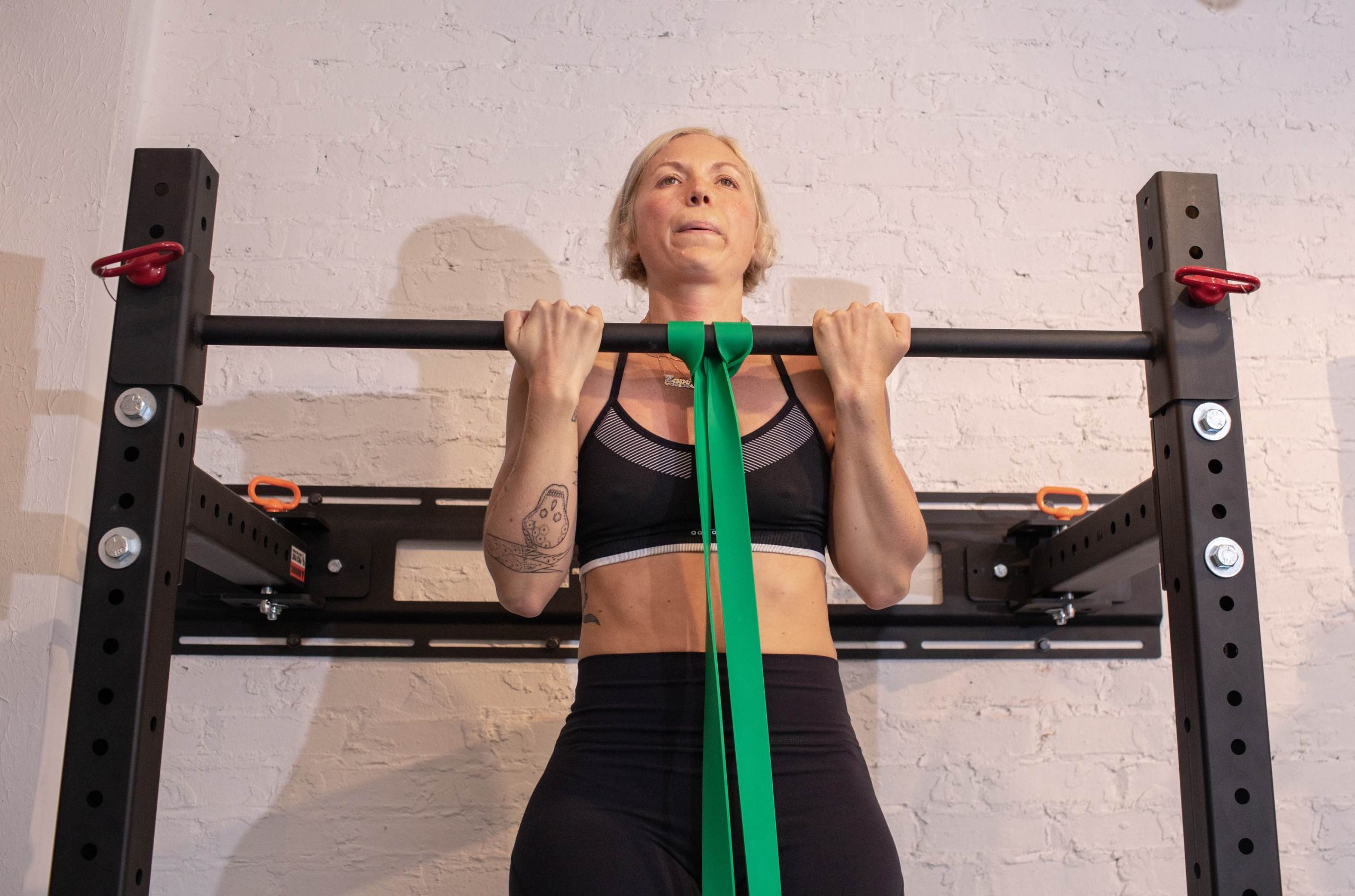 How has the current situation affected you personally?
There have been positives to the situation for me personally: I’ve been painting, I’ve started DJing again, I’ve been connecting with the people I have been wanting to connect with.

But many of the people in the community I have been serving are struggling with all sorts of things. Mental health issues from the pressure of lockdown, financial difficulties from not being able to go to work, lots of general fears and anxieties from this strange situation. I think it’s been part of my job to take care of myself so I can support other people, so I have been running a lot. In fact, I ran a marathon by myself last Monday! I live in Brooklyn and am close to a park which is fairly quiet in the mornings. That was really cool. But I’ve been resetting with my own life – connecting with the people that really matter. 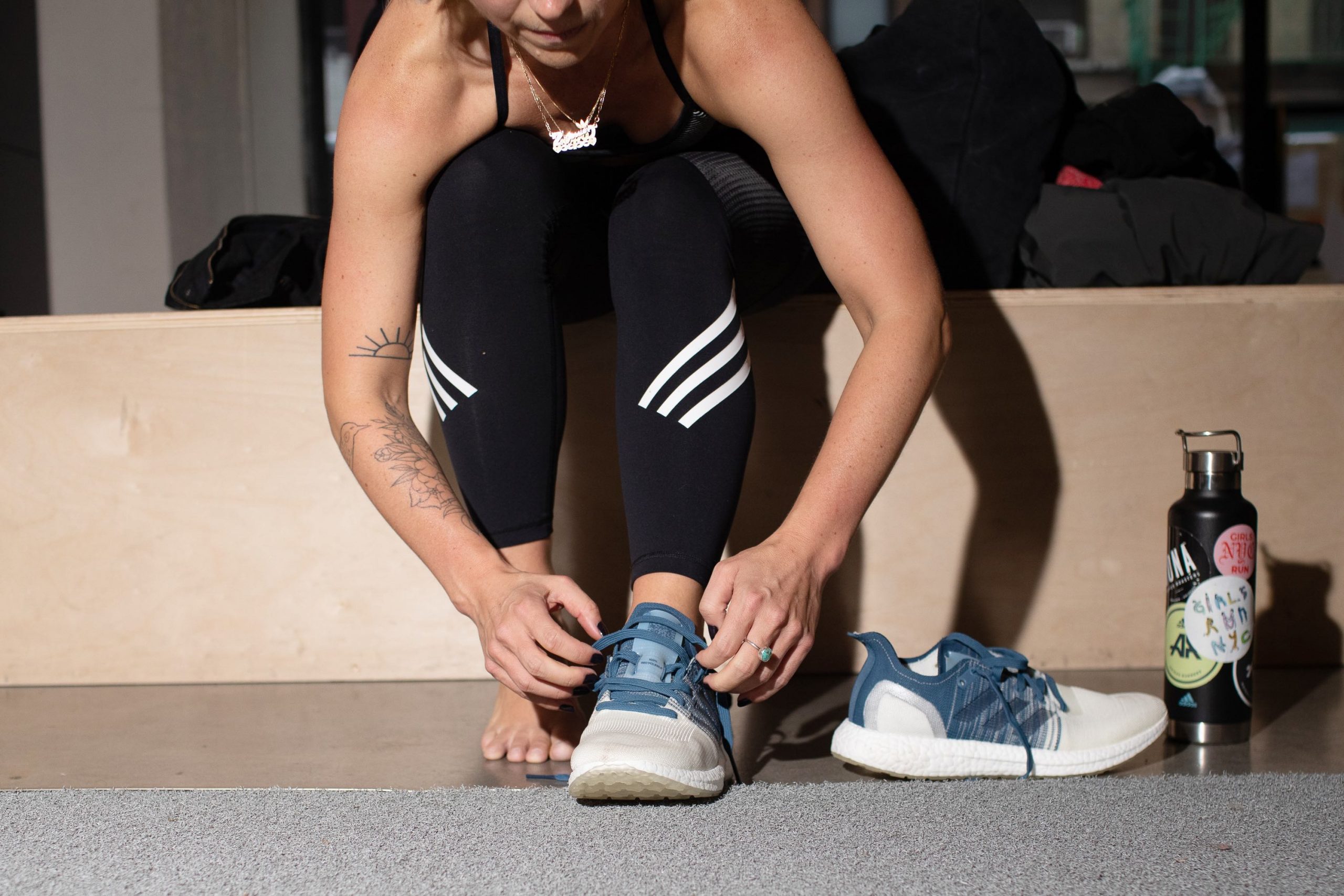 How did your running life first emerge?
I discovered I had a talent for sprinting when I was a kid and I joined the track team. But it was always a solo thing for me. When I moved to New York I landed a bartending gig. I was running in the morning, studying in the day, working till 2am, then going to a bar, then pushing on to a club. I would see this one guy a lot – he said he’d started this running group and that I should come.

I was skeptical, I had never run in a group before. We met at a little track down in Chinatown down by the Manhattan Bridge and we ran a loop over the Manhattan Bridge and back over the Brooklyn Bridge. I had never even been on the bridges at that point. The vantage point, particularly at night, was stunning. I’m there in the cityscape just with my own two feet. I’d taken myself to this beautiful place, I could see where I was going and I could see where I had been. It was the coolest thing that I had ever done.

Was that simply to do with the Manhattan skyline?
Partly. But there’s a topographic awareness that happens when you run distance through any city, a sense of the physicality of space that is truly special. You’re tapping into the energy of the place.

You’ll notice that the feeling of the streets is different from moment to moment. One day everything seems to be in chaos, and another time everything is flowing. The rhythms of the day itself change too. Through running, you begin to be intuitive with that. Add the sights, the smells, the sounds, the people – you quickly realise that running not only creates a deep engagement with a sense of place, but it also creates a deep engagement with one’s self. 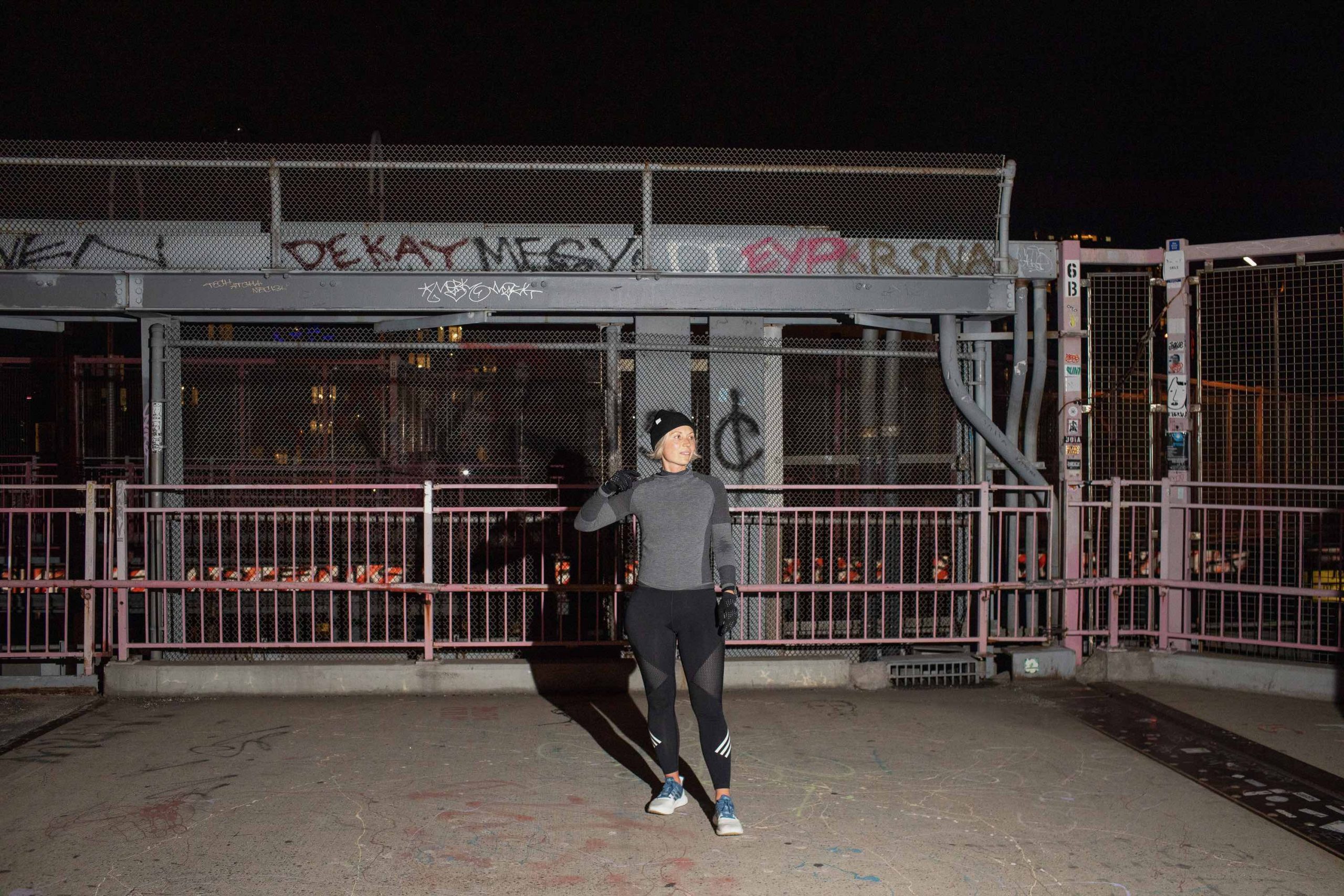 You helped to create a culture in urban running too, right?
Well, yes, with [running groups] The Breakfast Club and The Bridge Runners I think we inspired a lot of groups that have created this culture around us. There’s a thing with running that strips away the bullshit: there’s nowhere to hide. We talk about the parallels between the running scene here in New York and skateboarding culture. That’s a lot to do with the fact that you really do spend a lot of time in the streets, and even after runs you spend a lot of time with one another.

Running influences my art, I bring my therapist sensibility to the way that I coach, and I always think about group dynamics, which are very important for creating a healthy community. My creative life and my running life are now weaved together. Giving someone the skills through art therapy to be creative is very healthy, and so is facilitating the ability to run through the city.

The creativity and the therapeutic side of running is underpinned by a sense of community too. The kind of stimulation the brain gets when running gives you great ideas and stimulates dynamic conversations. You come back from the run, have a cup of coffee together and ideas are emerging all the time.

And in the process, running must build a deeper engagement with the wider environment, too.
Exactly. While running can be an act of rebellion, it can also be an act of self-care. If you care about yourself and your community, it’s a natural extension to care about the world around you. People gravitate towards the sustainability challenges we have set within the adidas running community. There is a sense of urgency right now. We’re going in a really bad direction, especially with plastic and with trash and material waste – I think the current situation has really highlighted how we need to act as communities, rather than as atomised individuals, to work towards positive change. 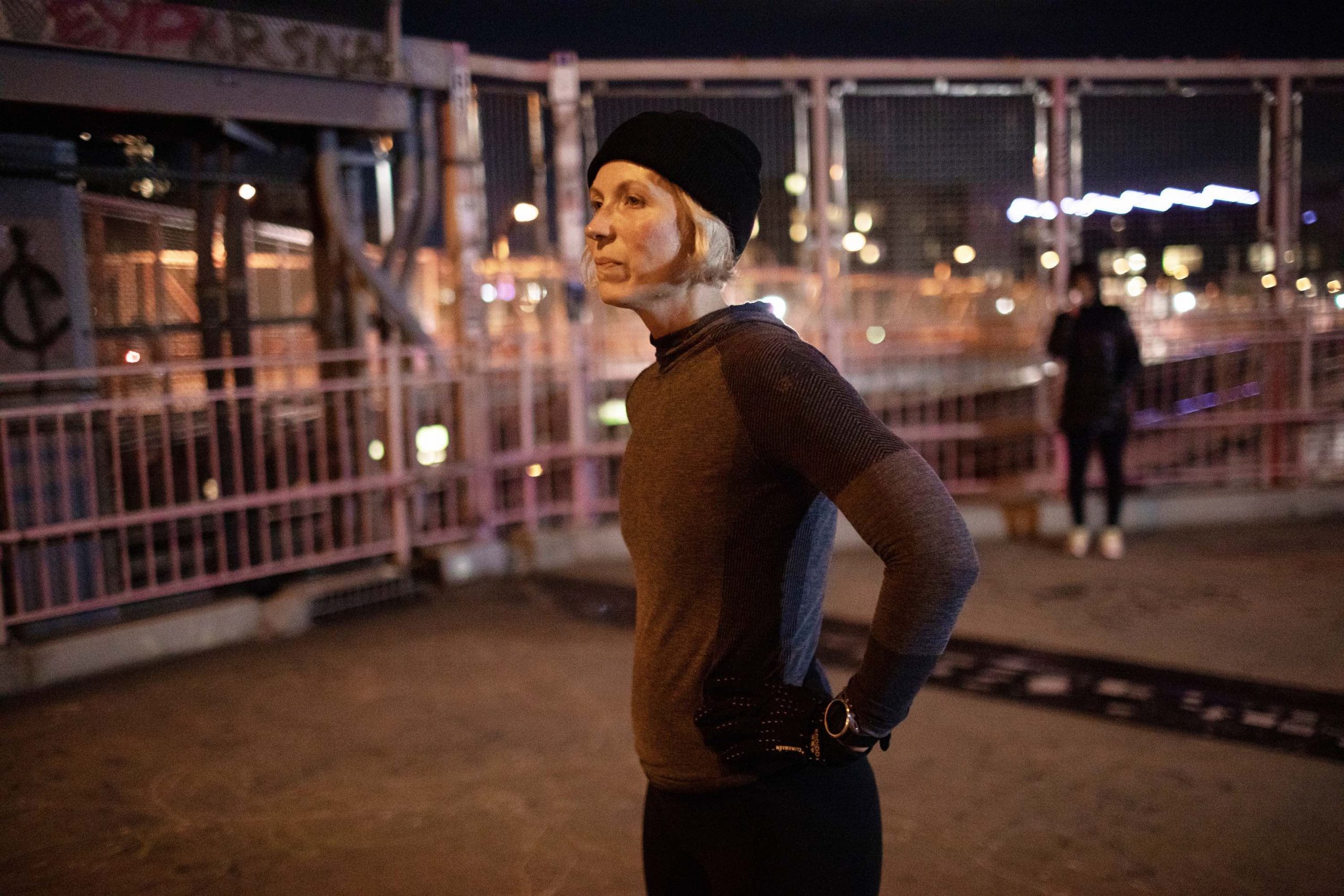 Linkedin
RELATED ARTICLES
OTHER ARTICLES
The government’s brutal crackdown on NGOs has left victims of rape without anywhere to seek help. And now, as the country plays a key role is Russia’s war, things are only getting worse.
To mark the premiere of his new documentary on surfing giant Gerry Lopez, the filmmaker and former pro skateboarder sits down to share his unique brand of wisdom.
The author discusses her new memoir, which offers a sobering reflection on the racism and otherness she’s experienced along with a joyful celebration of her culinary heritage.
A series of photos by the late Jerry Dantzic taken in 1957 show a tender side to the iconic Jazz musician.
Photojournalist Fiora Garenzi spoke with people still living in Eastern Ukraine, an area which seen some of the heaviest fighting since the war began.
With the virus now a global health emergency, we must take steps to fight misinformation and demand a swift UK-wide vaccine roll out, writes Phil Samba.