Outdoor / Sport / In football, multiculturalism only works when you win 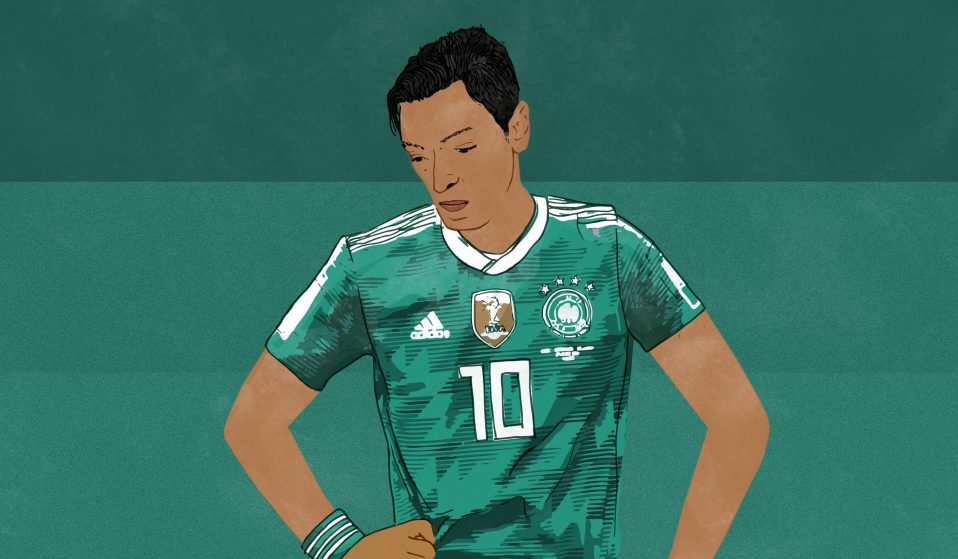 While the French team may have been celebrated for its diversity, the case of Mesut Özil shows that football and multiculturalism still has a way to go.

As a diverse French team lifted the World Cup trophy, it would have been easy to declare international football as the pinnacle of multiculturalism and tolerance. However, according to German footballer Mesut Özil, “immigrants” are only accepted when the going is good.

Earlier this month, when France lifted the World Cup for the second time in their history, nobody in the Luzhniki stadium celebrated quite like Emmanuel Macron.

The French president was simply everywhere: arms aloft in the pouring rain, embracing each and every player as they collected their medals – and even going as far to dab alongside star player Paul Pogba. Like any good politician, he had placed himself squarely in the frame of a victory he had nothing to do with.

Yet for Macron, an earnest football fan, this was not just a night to revel in sporting glory. Rather, it was a night that seemed to vindicate his political project. Just days prior to the final, Macron had stood in front of a room of young Africans in Nigeria and told them, “My generation never experienced colonialism… you have to recognise all the past deeds and face them, but you have to move forward.”

Now, here he was celebrating the victory of a team representing his country, 80 per cent of which was of African descent. It seemed to demonstrate everything he claims to want to shape his nation into: a modern republic, that’s young, dynamic, diverse, and French.

Macron, like many politicians before him, has recognised the role sport can play in forging a national identity. But, if the narrative of France’s World Cup victory is of a nation reaping the benefits of assimilation or multiculturalism (depending on which way you want to spin it), Germany’s shock exit in the group stage seems to have further exposed the cracks in an already deeply divided nation.

The question of how 2014’s winners could fall from grace so suddenly and spectacularly has triggered a long, dark night of the soul in the corridors of the German Football Association. However, an unwarranted degree of blame seems to have fallen at the feet of midfielder Mesut Özil, a player with almost 100 caps for the national side.

Özil has always divided opinion, but usually for his languid playing style on the pitch. Off it, he has generally been a popular figure. Born and raised in Gelsenkirchen in the Ruhr valley, the 29-year-old is a third generation Turkish-German and practicing Muslim – he’s also a world champion with Germany and the team’s record assists holder. For almost a decade, he was the poster boy for Germany’s integration of immigrant communities into the mainstream – a politician’s dream – but now he finds himself public enemy number one.

This May, Özil met with the “wrong” politician. During the visit of Recep Tayyip Erdoğan to London, the player –  who plays his club football for Arsenal – posed for photographs with the hardline President of Turkey, swiftly earning him condemnation from figures across the German political spectrum who argue Erdoğan’s stance on press freedoms and civil liberties are antithetical to Germany.

Özil has explained that his meeting with Erdoğan was not a political endorsement, simply a courtesy to the man who governs the country of his family. “I have two hearts, one German and one Turkish,” he stated. Yet for many this act of contrition was not enough.

In an eloquent three-page letter, Özil announced his decision to quit the German national team last week. His reason, he argued, was that could not continue to represent his country while experiencing what he described as an atmosphere of “racism and disrespect” – an accusation the German FA reject.

In his letter, he spoke of the slurs and insults he has received from fans and the public on the basis of his ethnicity and his religion, though the real target of his ire is Reinhard Grindel, President of the German Football Association.

Özil’s statement specifically singles out Grindel, citing a parliamentary speech he made in 2004  while representing Angela Merkel’s Christian Democrats, during which he referred to multiculturalism as a “myth [and] a lifelong lie”. In fact, the Chancellor herself has labelled multiculturalism “a grand delusion” in the past, viewing it as a distinctly Anglo-Saxon idea. For Grindel, and Merkel, and an increasing number across Europe, it seems you cannot have two hearts, you can only have one and it must be German.

Özil’s experience is hardly an exception. “In the eyes of Grindel and his supporters,” he wrote, “I am German when we win but I am an immigrant when we lose.” It’s a sentiment that in the past few months has been expressed not just by him, but a number of other European players of foreign descent, too – such as Karim Benzema and Romelu Lukaku. All in all, it raises the specter that perhaps, in these most febrile of times, our imagined communities are not as inclusive as we hope or choose to believe.

For the time being, at least Macron can feel that he has managed to kick that question into the long grass. Hearing Paul Pogba adapting one of France’s most recognisable Chanson songs to include the name of teammate N’Golo Kanté, the French-born son of Malian immigrants, in front of the Élysée Palace must have been music to his ears. For immigrant communities across Europe such scenes no doubt deservedly inspire unbridled joy. But, in the case of Mesut Özil, there’s also a reminder of something they’ve known all along: they’ll only sing when you’re winning.

Linkedin
RELATED ARTICLES
OTHER ARTICLES
Ahead of the policing bill reaching its final stages in the Lords, protestors came together to rally against the legislation.
Jermain Cikic reflects on his experience of visiting the island of Samos, Greece, in the summer of 2021.
From the queues outside to the last ones standing, Francesco Mellina’s new photo book follows a night that has gone down in the Northern-Soul history books.
Photographer Melanie Nissen recalls capturing the characters, fashions and rarefied chaos of a rapidly-expanding set of punk bands who helped to redefine the genre.
The musician, DJ and founder of Monika Enterprise reflects on a career defined by revolution and rule-breaking.
In Sheffield, food delivery drivers are fighting back against one of the giants of the gig economy.