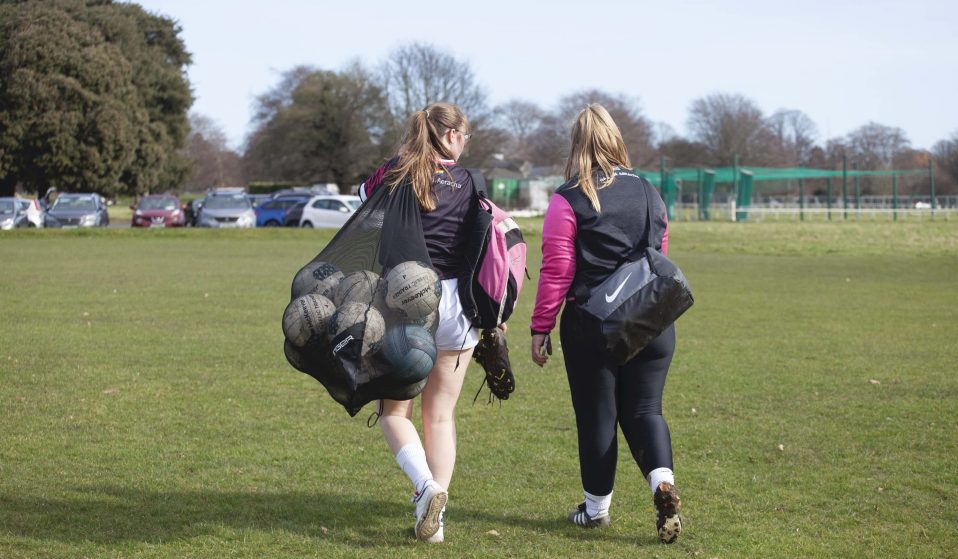 Ireland’s national sports are modernising. At the forefront of this movement is Na Gaeil Aeracha, the country’s first ever queer GAA club.

As the country slowly frees itself from the grip of social conservatism, its national sports are modernising too, powered by a new generation of athletes and fans determined to create more inclusive spaces. At the forefront of this movement is Na Gaeil Aeracha, the country’s first ever queer GAA club.

Towards the end of summer 2020, Karl Shannon sent out a tweet, asking if any LGBTQ+ GAA (Gaelic Athletic Association) players based in the Dublin area would like to come together for a game. While he expected some kind of response, he never anticipated it snowballing in the way that it did.

Within hours it had blown up, with almost 2,000 people engaging from across Ireland and beyond. “I thought maybe I’d get a few likes, a couple of retweets,” he says. “But suddenly my DMs were flooded with people wanting to join. I thought it would be a social thing of, like, 10 people. But now it’s turned into something very official, very fast – for good reason.”

Less than two years on, Shannon’s post has sparked more than just the “casual social kickabouts” he first envisioned. The result is Na Gaeil Aeracha, Ireland’s first ever fully inclusive GAA club. Encompassing a team of 46 players (there are over 140 people registered with the club), it sees young queer people and allies regularly coming together, united through a love of the game, and a shared wish to create more inclusive spaces in which to play it.

The team’s name was invented by a club member named Kevin Johnson, a Gaeilgeoir (Irish speaker). It roughly translates to ‘The Rainbow Gaels’. “We had some really good ones [suggested],” says Shannon, who is now the team’s chairperson. “Like, GA-Y, the Casement Gaels, in respect to Roger Casement [a queer Irish diplomat, poet and activist who was executed for his part in the 1916 Easter Rising]. But while Na Gaeil Aeracha technically means the Rainbow Gaels, ‘aeracha’ can also stand for ‘queer’ in general. So we thought it would be pretty appropriate.”

For the uninitiated, GAA is one of the country’s cultural touchstones. Focused primarily on promoting indigenous Gaelic games and traditional Irish sports (hurling, camogie, Gaelic men’s and women’s football, Gaelic handball and rounders), the GAA also helps to promote traditional Irish music, dance and the Irish language. In day-to-day Ireland though, GAA is also a term used interchangeably for Gaelic football. This is what Na Gaeil Aeracha are currently focused on, with a view to also encompassing camogie and hurling in the near future. 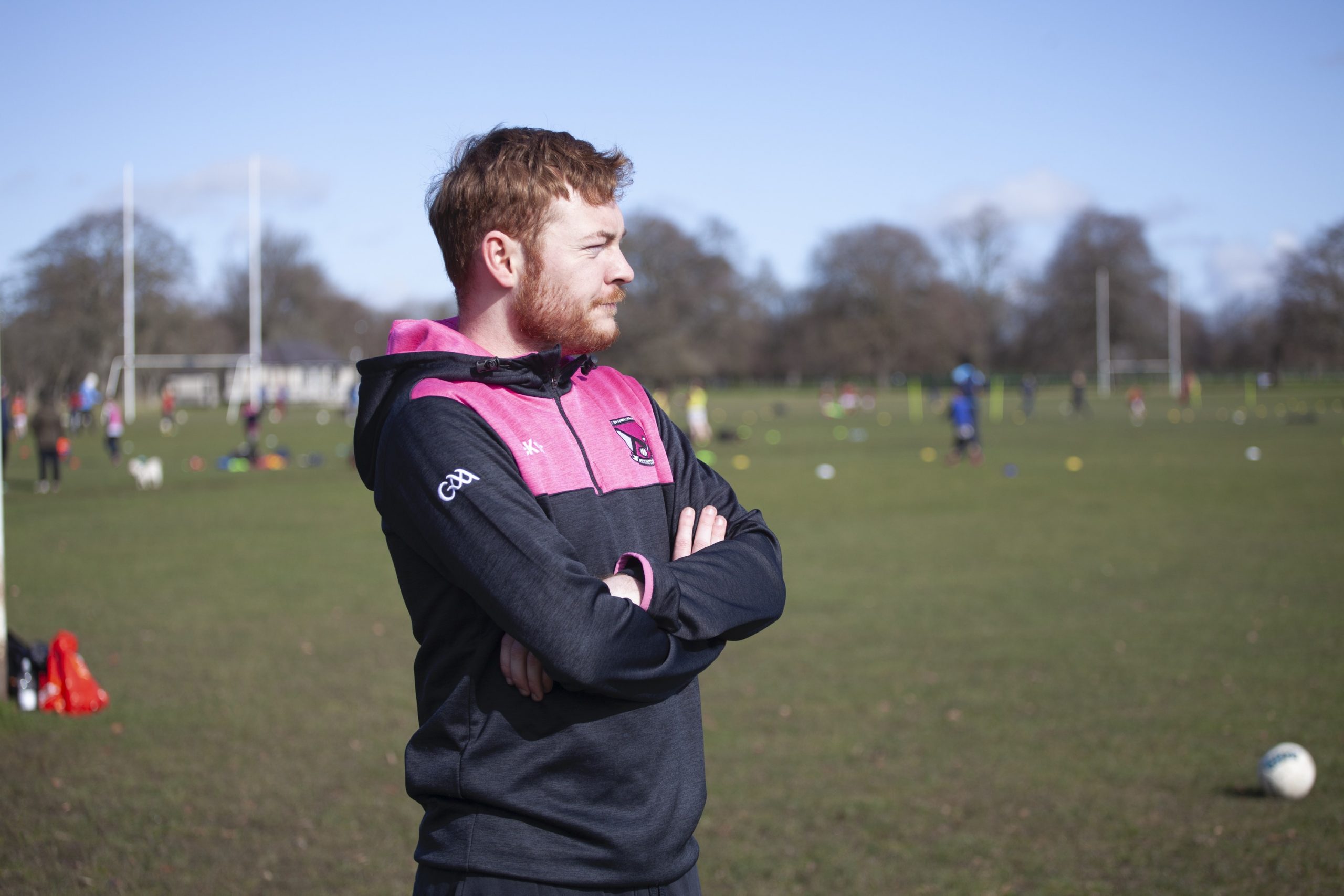 Thanks to the prevalence of the Irish diaspora, it’s an international organisation with over 500,000 members across the world. However, GAA is of course most ubiquitous in Ireland, where most children and young people will grow up with at least some exposure to Gaelic games through school or their community. Many, like those who belong to Na Gaeil Aeracha, continue to play as adults, with a number of competitions at divisional, county, inter-county and provincial and national (All-Ireland) events.

But despite its ubiquity in Irish society, GAA had until recently trailed behind a number of other sports in Ireland when it came to LGBTQ+ teams. The Emerald Warriors RFC, a rugby team, was formed back in August 2003, with the aim of “providing an open, inclusive and safe environment to watch, play and enjoy” the game. Elsewhere, The Dublin Devils, Ireland’s only men’s gay football team, celebrated its 10th birthday in 2015.

Despite being set up in the midst of social-distancing guidelines and pandemic uncertainty, Na Gaeil Aeracha now trains regularly in Dublin. Training is twice a week – Wednesdays and Sundays – and a space that caters for all levels of ability. Along with the kind of drills you’d expect on a football ground, there are also plenty of team-building exercises, as well as regular social kickabout sessions for players who are curious, but don’t feel confident enough to sign up to play in matches right away. For those that do, Na Gaeil Aeracha recently geared up for the start of their second season competing against other Dublin-based teams.

“We had about a week to gather players, when usually you’d have about six months,” says Emma Loo, Vice-Chair of Na Gaeil Aeracha and Bainisteoir (manager) of the women’s Gaelic football team. She got involved with the club shortly after seeing Shannon’s initial call-out, ending a six-year retirement from GAA.

“It’s indescribable just how welcoming and safe [the club] feels,” she says. “To not be thinking, ‘I need to be watching behind my back, I need to think about what I’m saying, I won’t stay too long in the dressing room because I’m being judged.’ We can just authentically be ourselves. For a long time, when we started, we didn’t even know anyone’s sexuality or gender identity. We never asked. It was just footballers. 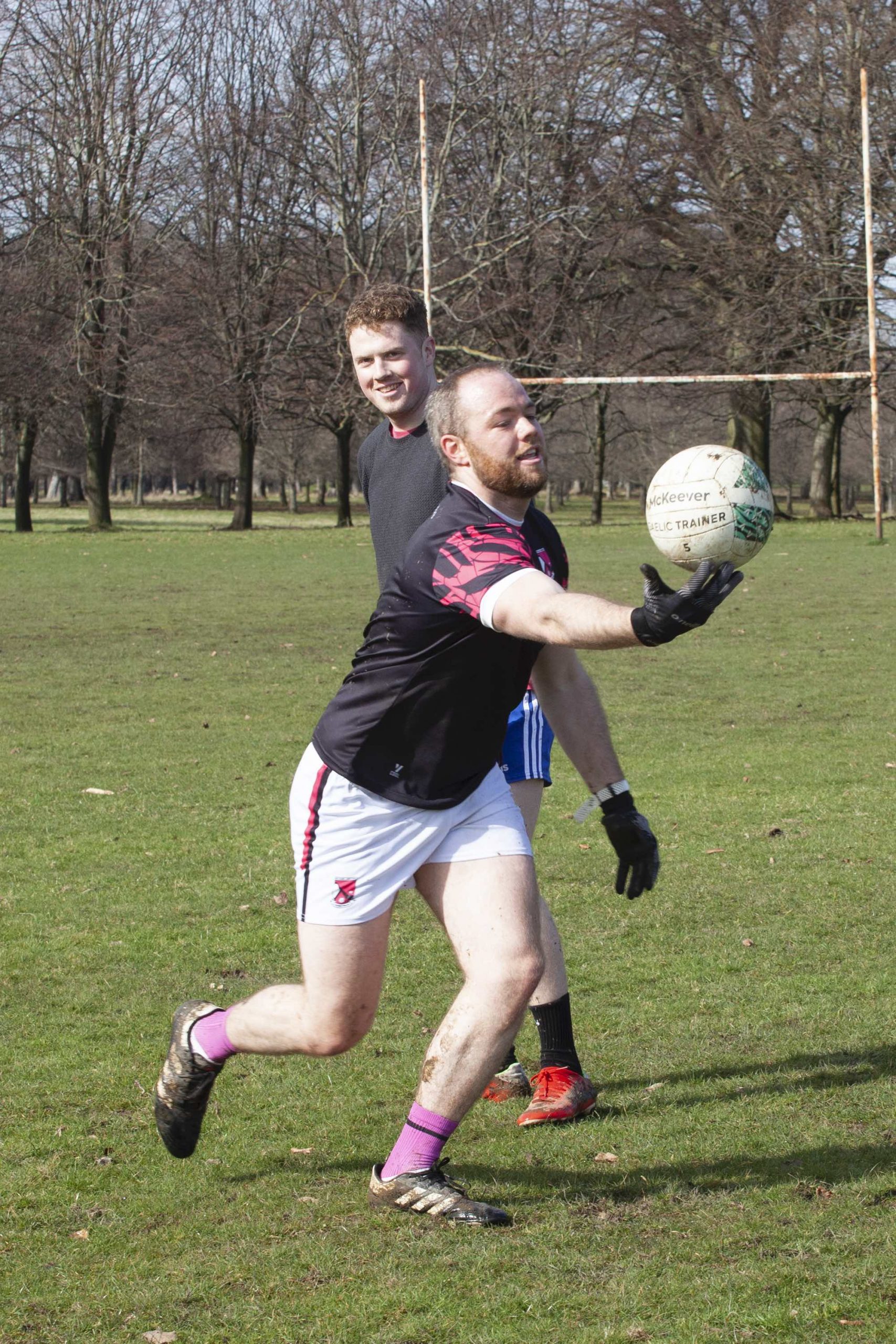 “We heard from players that they didn’t connect with local clubs and didn’t feel safe. It’s not that they were being actively bullied or that there was homophobia, but just this sense that they couldn’t be themselves.”

Loo feels that Na Gaeil Aeracha is making significant progress when it comes to removing sport from stereotypical associations of “straight-lad” culture. In spite of this, though, there’s still work to do. Recent research from Stonewall found one in eight LGBTQ+ people (12 per cent) avoid going to the gym or participating in sports groups because of fear of discrimination and harassment. Transphobia in particular remains a huge issue. Just this week, in the UK, Prime Minister Boris Johnson resisted calls to ban conversion therapy for trans people, and said that “biological males” should not compete in female sporting events, fuelling a barrage of toxic rhetoric.

As much as Irish society has taken huge strides towards modernisation in recent years with marriage equality and abortion rights, it has traditionally been an unwelcoming place for queer people. Much of recent Irish history, at least since the Republic of Ireland gained independence from Britain, has been centred on championing national identity, which perhaps goes some way of explaining the cultural importance of the GAA.

Often, however, that same nationalism has been closely tied with traditionalism, which has manifested itself in conservative, deeply religious homophobia, transphobia and misogyny. On both sides of the border, both before and after the Republic gained independence, it’s difficult to overstate the suffocating influence of the Catholic Church – which, with its impact on schooling and the community, once dominated Irish society. It’s only in recent years – helped in no small part by a population that’s becoming increasingly diverse and secular – that Ireland has begun to define itself as a nation in terms of what it does in the present.

“When I got involved, I started hearing everyone else’s stories, and realising I’m not alone in [the] anxieties I may have had beforehand,” says Shannon. “But I also realised, quite bluntly, that this was never about me. And as close as I may feel to [the team], ultimately that doesn’t really matter. It was always for everyone.” 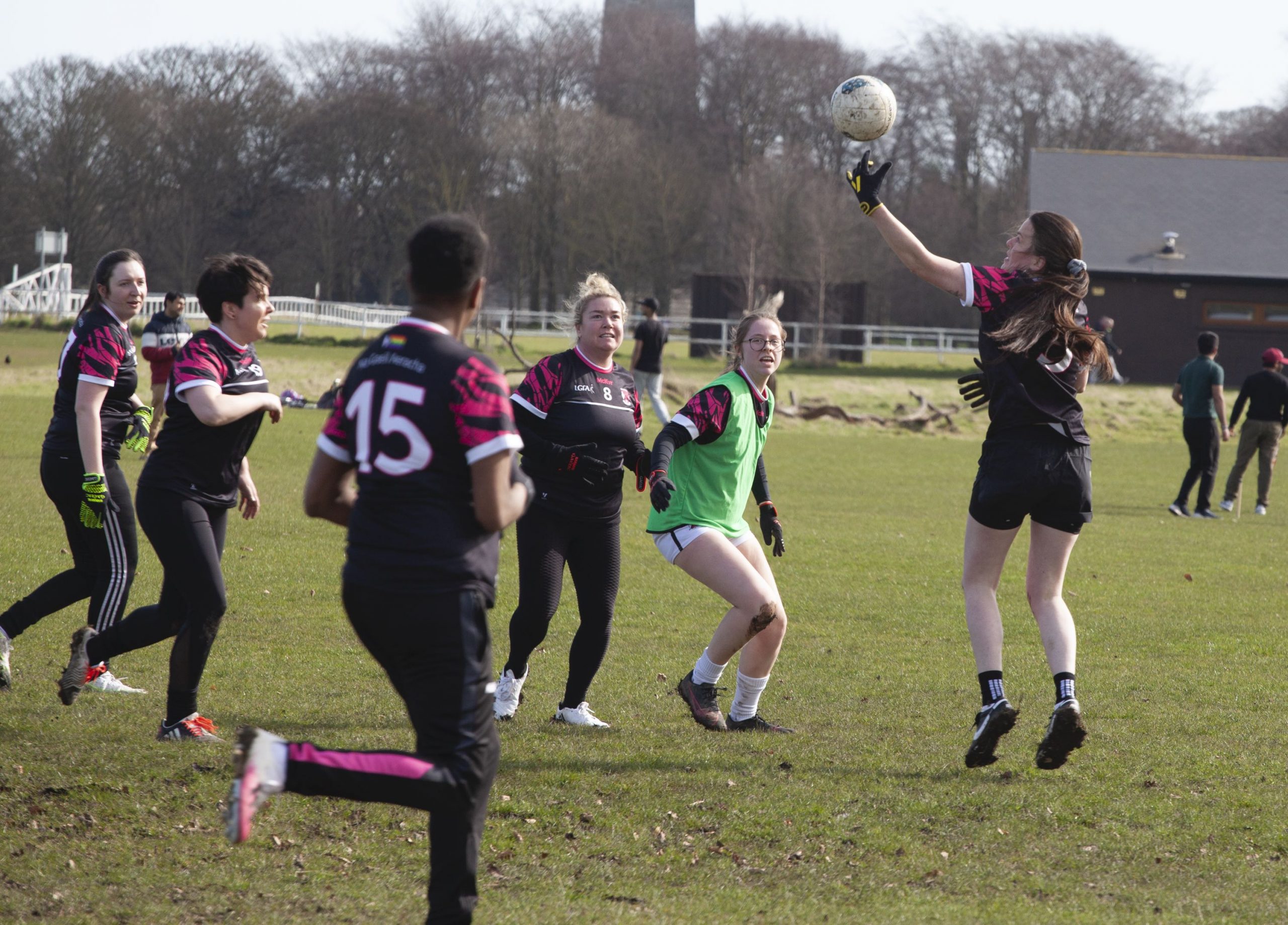 The inception of Na Gaeil Aeracha, an inclusive, grassroots club essentially crowdsourced through social media, could not be more emblematic of a new, modern Ireland – of the growth and change the country is at last beginning to undergo. Extricating Irish modern society from the influence of its oppressive, religious past has been at times a painfully slow process. It’s hard to believe that it was only in 1993 that homosexuality was decriminalised in the Republic of Ireland (the North was only slightly quicker, making the change in 1982), and that it would be another decade or so before same-sex marriage was legalised, by referendum, in 2015 (in Northern Ireland, same-sex marriage was only legalised in January 2020).

Even after these landmark changes, Ireland still has a long way to go in unpacking its homophobia and cultural heteronormativity. It was, after all,  only a few months ago that offensive, misogynistic material was removed from Irish schools. The teaching resources, developed in line with the introduction of compulsory Sex Education as part of the curriculum, saw teenage students asked to discuss a series of inflammatory statements, such as: “All gays molest children”, “Girls who don’t wear make-up are lesbian”, and “All gays are HIV positive”.

Meanwile, a survey conducted across 28 member states by the European Union Agency for Fundamental Rights found that, in Ireland, queer people still experienced abuse and discrimination. One 19-year-old trans man reported: “I was holding hands with my (now ex) boyfriend in public. We had bottles thrown at us, a woman spit on us, and a good few people make comments like, ‘You two shouldn’t be holding hands’.” Former president of Ireland Mary McAleese called 2015’s gay marriage referendum a starting point, rather than the finish line. “We now need to galvanise fresh momentum to bring about an end to the continuing suffering of the LGBT+ community and especially of its younger members,” wrote McAleese in a 2020 Irish Times piece. “It was an assertion that Ireland is a place of inclusion, equality and safety for all.” 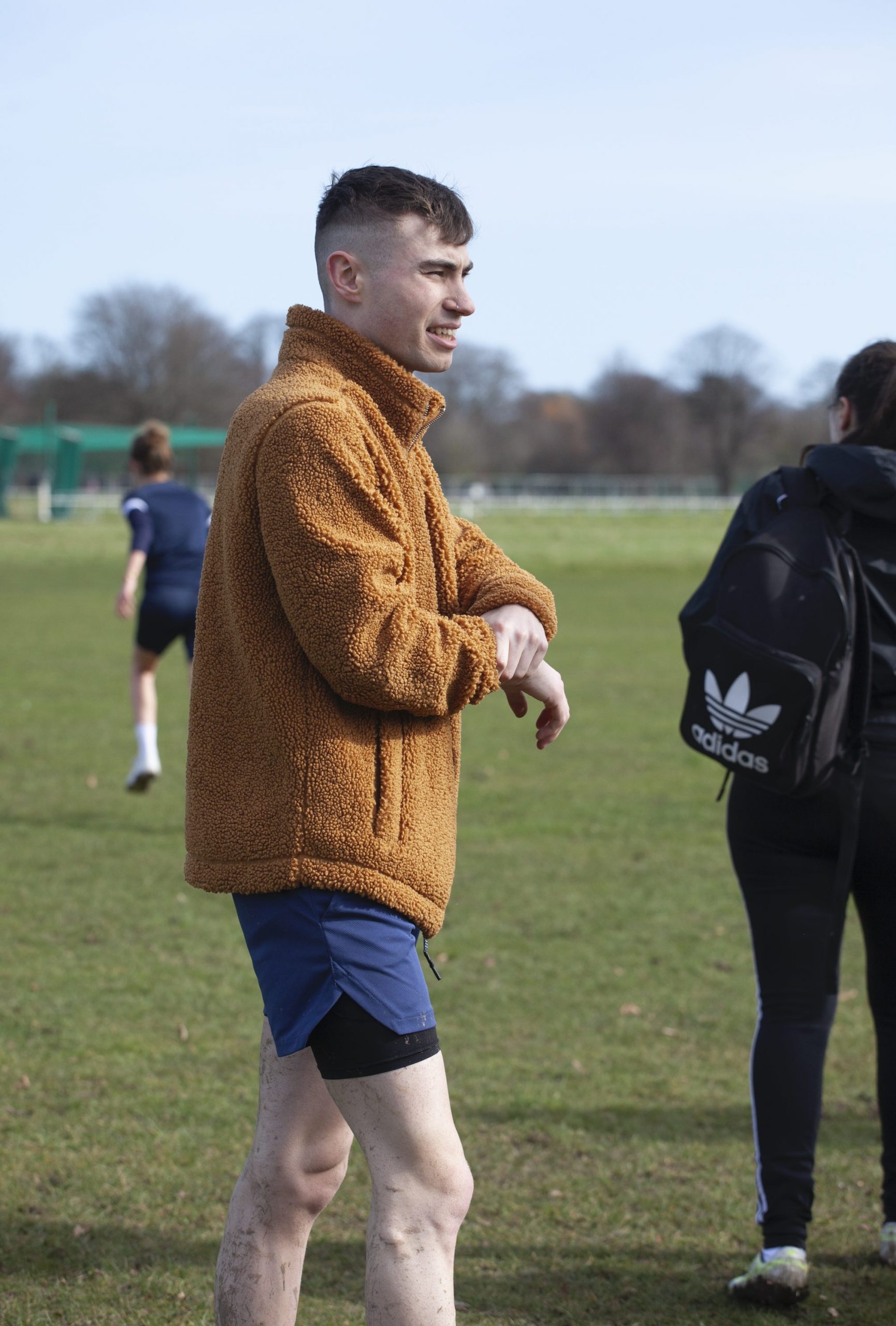 Culturally, it does appear that Ireland is taking steps to cement that assertion. The same survey that revealed experiences of transphobia in Ireland also showed that compared to the majority of other EU countries, queer people report that prejudice and intolerance has dropped in their country in the past five years (77 per cent compared to 40 per cent across the EU). Over half (53 per cent) are now often or always open about being LGBTQ+ in Ireland (compared to 47 per cent across the EU). In June 2017, Ireland appointed Leo Varadkar as Taoiseach (the Irish head of government), which back then made him just the fourth openly gay head of state in the world.

For the members of Na Gaeil Aeracha though, it’s all about looking towards the future rather than dwelling on the past. Their goals are twofold: both continuing to be a space that’s safe and welcoming (both for LGBTQ+ people and allies, but also players of all different abilities), while also continuing to grow and compete on a sporting level.

“What I want more than anything is facilities specifically designated for Na Gaeil Aeracha,” says Shannon. “In my dreams, I win the Lotto and I buy a pitch and a clubhouse and get everything set up for us.”

“We want to win a league,” adds Loo. “Or the championship. That would be a lovely goal on the competitive side. But overall, we just want the club to grow in players, supporters, sponsors. We just want people to hear about us and to know we are an inclusive space that people can come along to, and that sport is there for you – no matter who you are.” 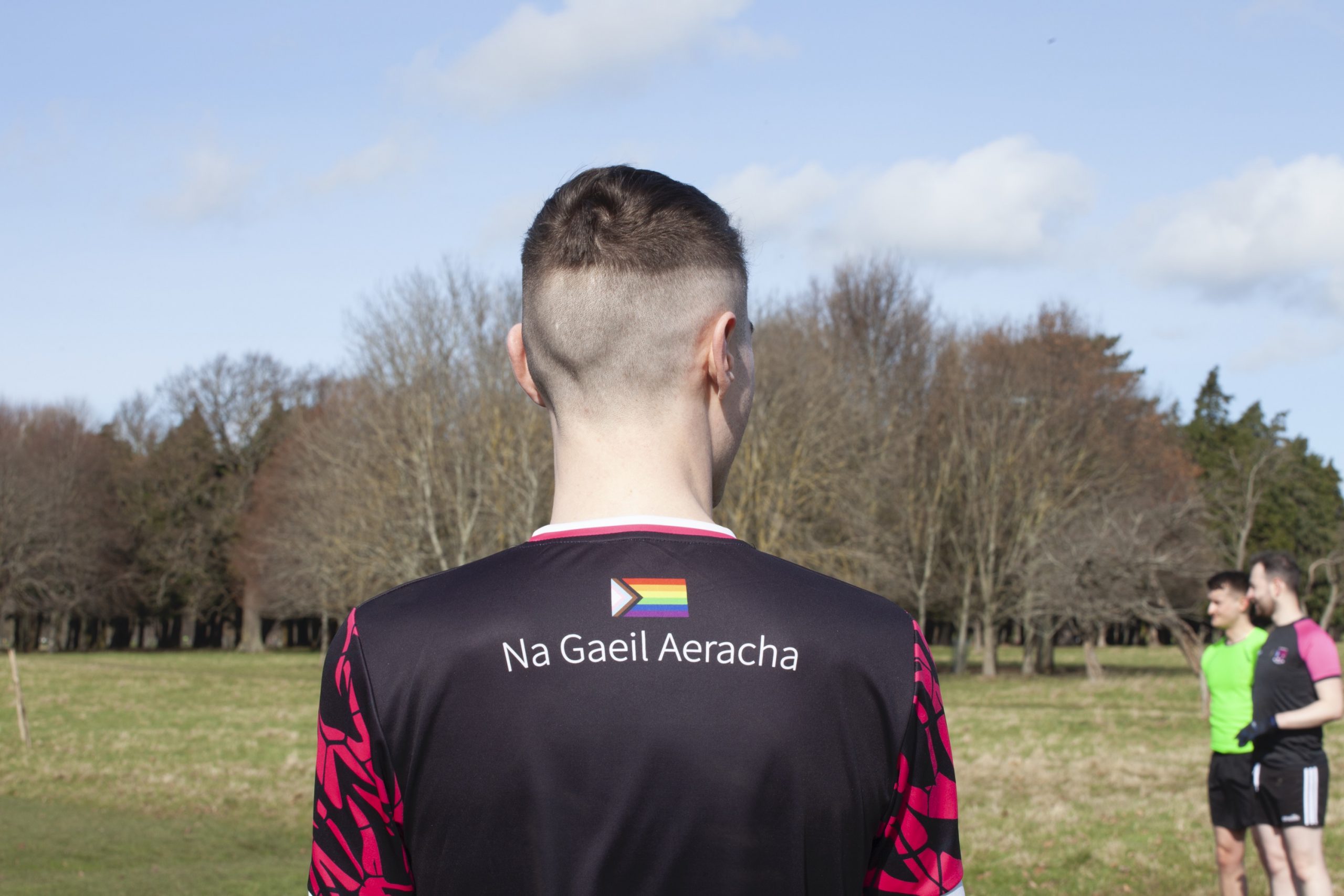 Linkedin
RELATED ARTICLES
OTHER ARTICLES
The demonstration took place this week over plans to slash £50m from arts bodies in London.
Max Miechowski reflects on documenting land that is being lost to the sea – and the people who live life on the edge.
Hackney Bumps is a DIY sanctuary in the heart of East London, home to a thriving diverse community of skateboarders – and beyond.
How the sounds of nature, air force bases, walking across the country, Windrush and synthesisers have influenced one woman’s journey through music and life.
Jack Lueders-Booth reflects on capturing the community that lived and worked along the city’s busiest railway route during the 1980s.
Proponents of personality tests argue that they’re necessary to find the best person for the job – but in practise, they’re often discriminatory.