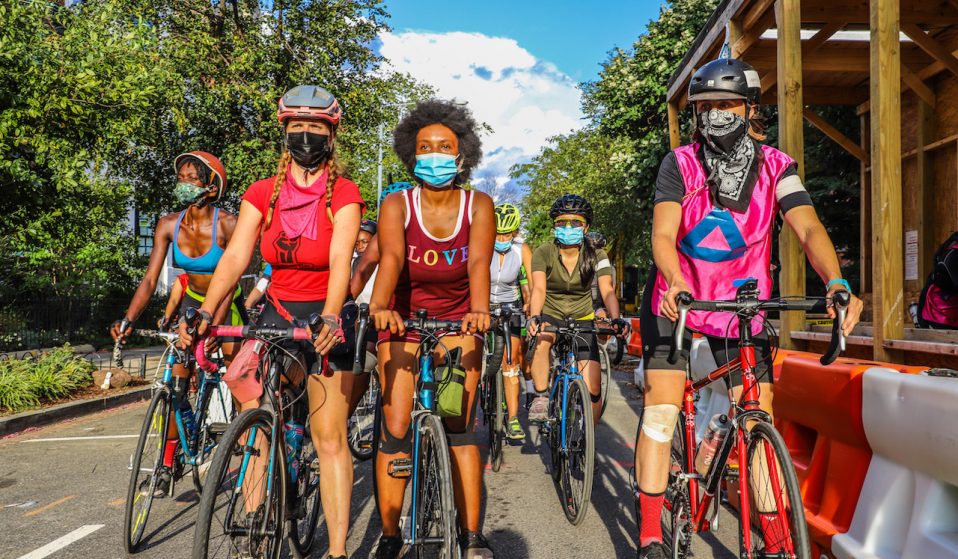 Writer James Yeh meets Ride to DC, one of the most diverse bike tours America has ever seen, as they embark on a treacherous, 300-mile journey to join BLM protestors at the Lincoln Memorial

Earlier this year, one of the most diverse bike tours America has ever seen made a treacherous, 300-mile journey to join Black Lives Matter protestors in DC. Writer James Yeh spoke to the group about cycling for social change.

Over the course of one sweltering week in late August, a group of New York City cyclists rode 300 miles from Manhattan to Washington, DC, pounding city streets, country roads, state highways, dirt trails, and the occasional bike lane, to join tens of thousands of Black Lives Matter supporters at the Lincoln Memorial to mark the 57th anniversary of Martin Luther King, Jr.’s historic “I Have a Dream” speech.

The idea for the trip, described as “a ride to recognise the existence and significance of Black lives,” was hatched by Hilena Tibebe, a 28-year-old ESL teacher at a high school in the Bronx. Along with her Ride to DC team of eight leaders, massive support and crew team, and roughly 120 riders, Tibebe spent two months organising training rides, repair workshops, and Zoom workouts to prepare for the adventurous and, at times, gruelling trek.

“There’s a special place for bicycles in the Black Lives Matter movement,” she told Huck. She’s not alone in her belief: over the summer, features on protesters on bikes appeared in the New York Times, New Yorker, Guardian, and Bicycling Magazine, along with a brief profile of Tibebe herself in Conde Nast Traveler.

What distinguishes Ride to DC is its Black woman-led leadership and its extended duration: six days’ worth of riding. Because of pandemic considerations, the group spent most nights in campgrounds.

I caught up with the group on day four, at one such site in rural Pennsylvania, outside Lancaster. It had rained earlier and the ground was still soggy, but spirits were high. “I want to do everything in my power for the Black community,” said J. P. Peck, a 27-year-old actor who hadn’t ridden a bike in two decades before embarking on the daunting trip.

Peck, whose sign across his back read “AMPLIFY BLACK VOICES,” explained that everything he was using – his single-speed, his helmet, even his camping gear – had been donated so he could make the trip. “This is probably the best thing I’ve ever done for myself,” he said. “It was an opportunity for me to raise awareness for the Black lives that are silenced, that are afraid of speaking up. Right now, I think comfort is really out the window.”

Around five AM, we awoke in darkness to eat yoghurt and granola, apply “butt butter” (chamois cream), and break camp. In a damp field, a blue-haired martial artist led the group through stretches.

Another organiser reminded the group to get into “that flow cadence” and reapply sunscreen “as often as possible.” “And eat…” she began, awaiting a response. “Before you’re hungry!” replied the riders. “Drink before you’re thirsty!” They knew the drill.

Before we took off, I spoke to dyslexia activist Debbie Meyer and her teenage son Isaac Rosenthal. Rosenthal told me that, unlike events such as the New York City Half Marathon, which he’d done as a 12-year-old, he’d been drawn to the “community and social justice” aspects of Ride to DC. “I really like how one of their goals is changing the demographics of cycling,” he said.

“I wish everybody here, when they turn 53, have a 15-year-old social justice advocate who likes to do endurance sports,” Meyer added.

“Biking’s been essentially this white male-centric sport,” said crewmember Roberto Godinez, who split his time bombing down hills and driving the supply trucks that would pick up broken-down bikes and exhausted riders and ferry them to camp. “This is easily the most diverse biking tour America has ever seen, by far, in terms of women, in terms of people of colour.” 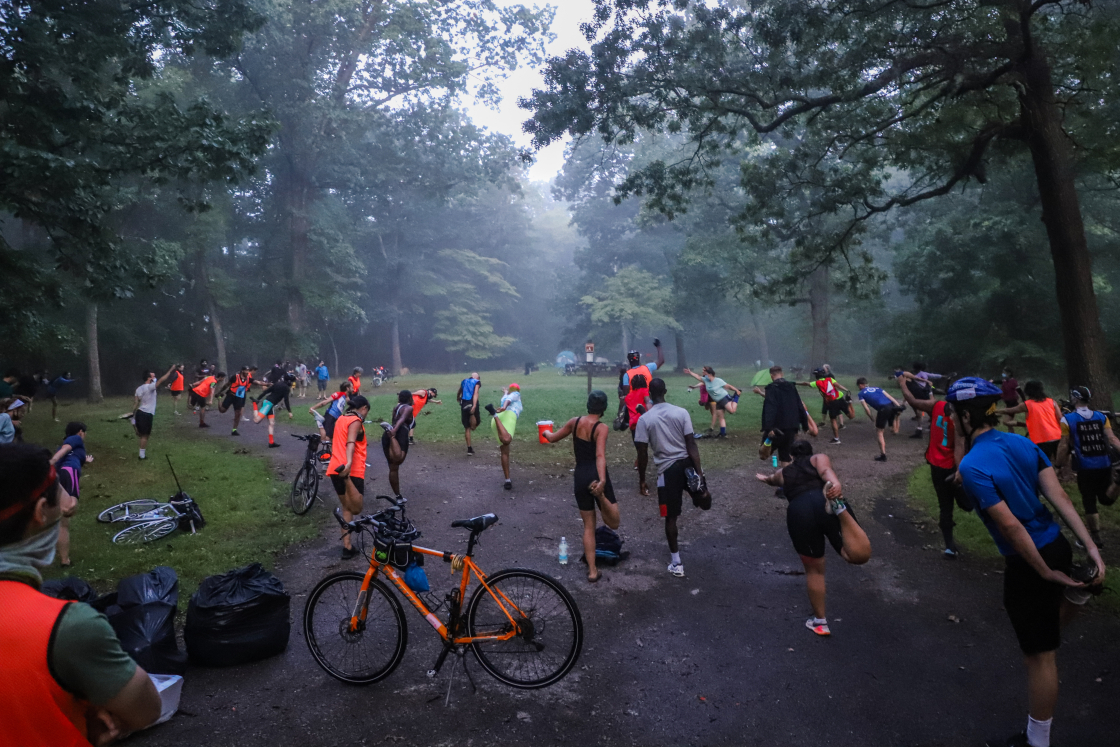 Multiple organizers remarked that I had chosen both the most beautiful and difficult day – 70 miles, with an overall climb of nearly one mile. Along one Pennsylvania road, the group received honks of greetings from a box truck in which a white-bonneted Amish woman rode shotgun; next came a Chevy with a custom horn playing “Dixie.”

Amid the cornfields of northern Maryland, we passed hand-painted signs hawking hay, vegetables, and duck eggs. Outside Baltimore, we came upon two large Trump signs with the messages: “Join the Revolution” and “Annoying America’s Career Politicians since 1988”; directly across the street was the message, spread across three signs: “Love” “Trumps” “Hate”.

On a sun blanched stretch of Washington Boulevard, in North Laurel, Maryland, we exchanged cheers with Actions Against Distractions, a small cadre of weary but determined protesters from Baltimore making the 38-mile trek to the Capitol by foot.

To travel hundreds of miles by bike requires no small amount of courage, which isn’t lost on onlookers. Melanie Kruvelis told me about a Pennsylvania woman who had come out onto her porch to survey the riders stopped near her property. “I thought she was going to be a Karen with her shotgun,” said Kruvelis, but then, she explained, the woman invited them into her yard, so they wouldn’t be exposed to traffic.

The challenge and precarity of biking cross-country, in Kruvelis’s view, had helped to forge a connection. “Whatever politics they read into it,” she said, “it’s like you’re still doing something impressive.”

These moments of connection come, at times, with a price. Another rider told me about an older Pennsylvania man who had encroached on the group with his pickup, shaking his fist and yelling out “blue lives matter!”

Even the road itself can be a threat: spills on surfaces as varied as the ones from New York to DC are somewhat inevitable; one biker shattered his hip after hitting a patch of loose gravel on a Pennsylvania highway. (Just two weeks after the ride, Sarah Pitts, 35, a Brooklyn prosecutor, activist, and friend of Ride to DC, was tragically killed when she was struck by a bus in the city.) Exceptions considered, the tour was still remarkably safe, as riders shouted out warnings that achieved a certain poetic quality: “Pothole! Gravel! Hazard! Car back, car back!” 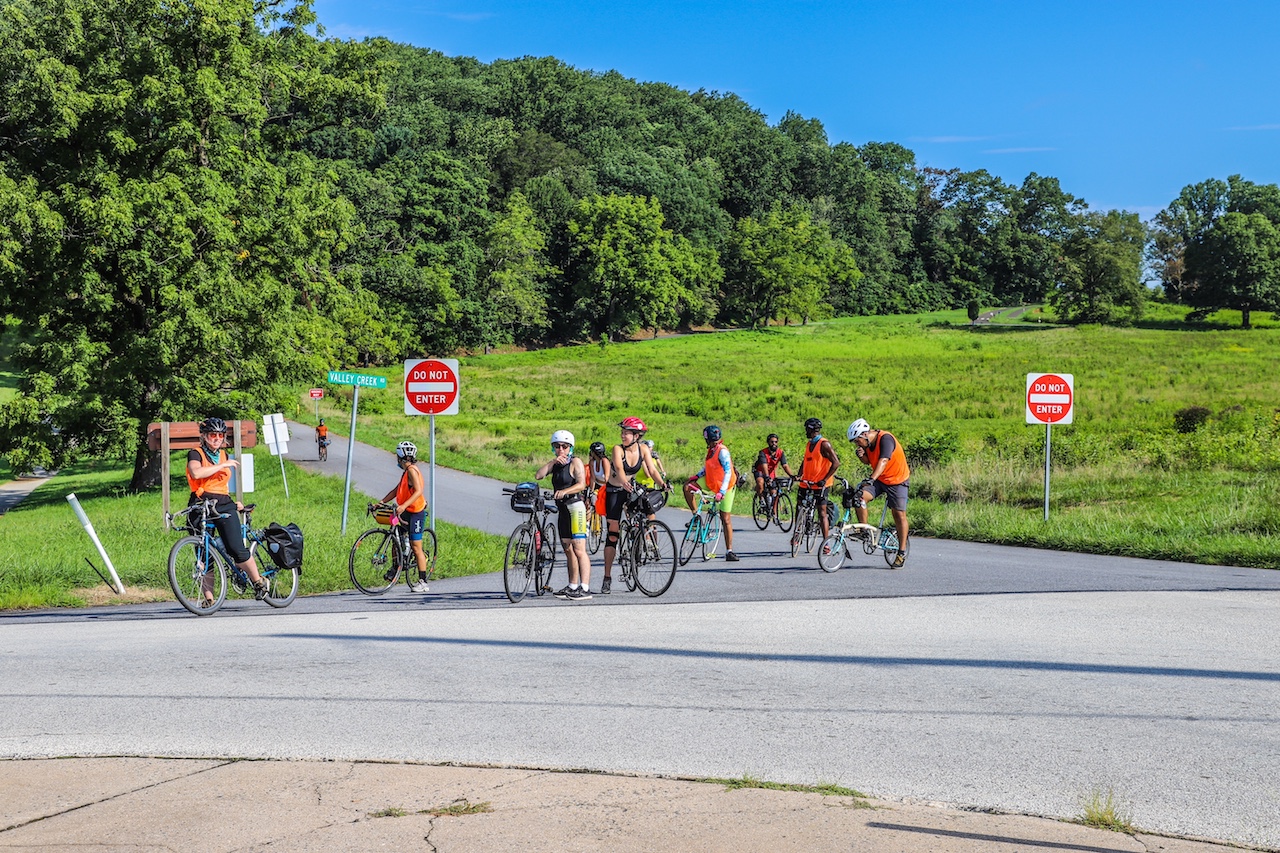 Around 6:15 PM on the partly cloudy and temperate final day, the Ride to DC crew, exhausted and ecstatic, entered the capitol. Biking through Black Lives Matter Plaza, the procession sang: “One, we are the people / two, say it louder / three, we want justice / for Black people!”

At the Lincoln Memorial, where Martin Luther King, Jr. had stood in 1963 and where his son, Martin Luther King III, and the Reverend Al Sharpton would address tens of thousands the next day, the riders continued to chant as onlookers in black masks filmed with their phones or clapped their hands and swayed to the tune.

“How did y’all get into my city? That’s awesome, dude!” shouted somebody, during a lull. As this was going on, a sunglassed and crew-cutted police officer stood, alert, at the main entrance. He grasped the handle of his assault rifle.

That night, at the Capital Hilton in downtown DC, the cliché about journeys, not destinations, felt apt. Some of the group checked out nearby protests, though most recharged, changing into pyjamas and passing the whiskey.

Late into the night a select few – the organisers, their support team, and whatever volunteers they could rope into the task – remained busy, loading everyone’s bikes into two box trucks that would deliver them back to New York. The riders themselves returned home, after the march, via Amtrak, bus, and carpool.

The diverse tour has evolved into a diverse community, post-DC. On a cool September night several days after the trip, I met up with a group of 30 Ride to DCers and one Pomeranian Pekingese named Gisele, whose owner, Mondana Motazedian, a fashion designer, had tucked into her backpack.

The night’s ride – 25 miles from the Williamsburg Bridge, along the East River, then through Harlem – had materialised that day over Signal and Slack groups the riders had originally started for the DC trip, and are now using to organise meetups.

“What’s surprised me the most is how life-changing this trip has been,” Tibebe told me at the foot of the bridge.

Emily C., a dancer and protest regular, said she was surprised by “how much people looked out for one another: the camaraderie, the support”. Shani Rosemary Penn, a medic on the ride, had been trying to find a “better way to use myself and my body for the Black Lives Matter movement”. Ride to DC “really married it all together,” she said.

Drimir Ferguson, a healthcare worker and former college basketball player from the Bronx, admitted to not feeling “mentally or physically ready to endure such a gruelling bike ride from state to state”. But the group’s shared belief in the cause of Black lives helped motivate him. “It changed my thought process on achieving goals,” he said.

“I never had a crew a hundred deep to roll with, to call upon anytime,” reflected Sage Hamilton-Hazarika, 28, a member of the leadership committee. “That’s just very moving.”

And the group doesn’t plan to slow down. Tibebe told me that they intend to keep up with the training rides – even through NYC’s miserable winter – for Ride to DC 2021. She wants the team to learn the language of business, so they can succeed as a nonprofit (they became a 501[c]3 in August, shortly before the ride).

Other plans include partnering up with community organisations to teach bike-riding to kids, forming a female or nonbinary fixie club, and, in the wake of Sarah Pitts’s death, “pushing harder for bike safety, such as driver training”.

“I truly believe Black and Brown kids and women need to get on bikes to experience the freedom and the empowerment,” Tibebe said. “If every single child – and people of colour in general – had access to a bike, it would create drastic social change.” 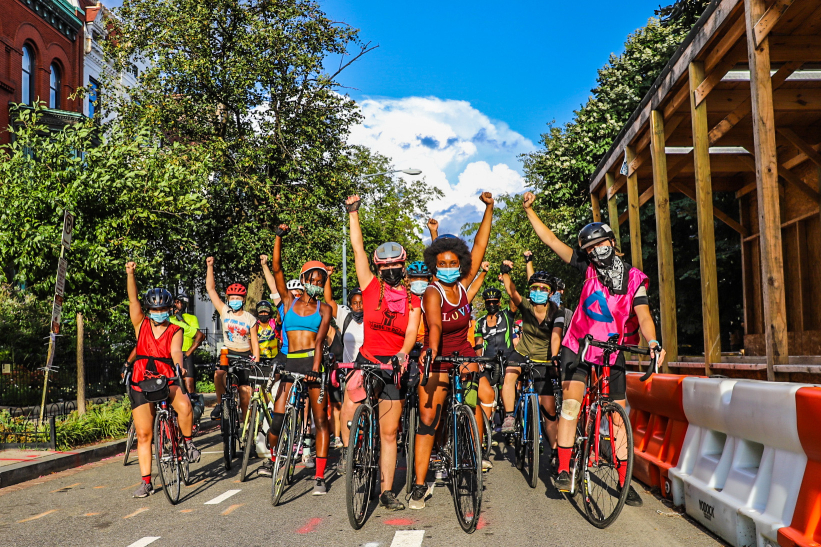 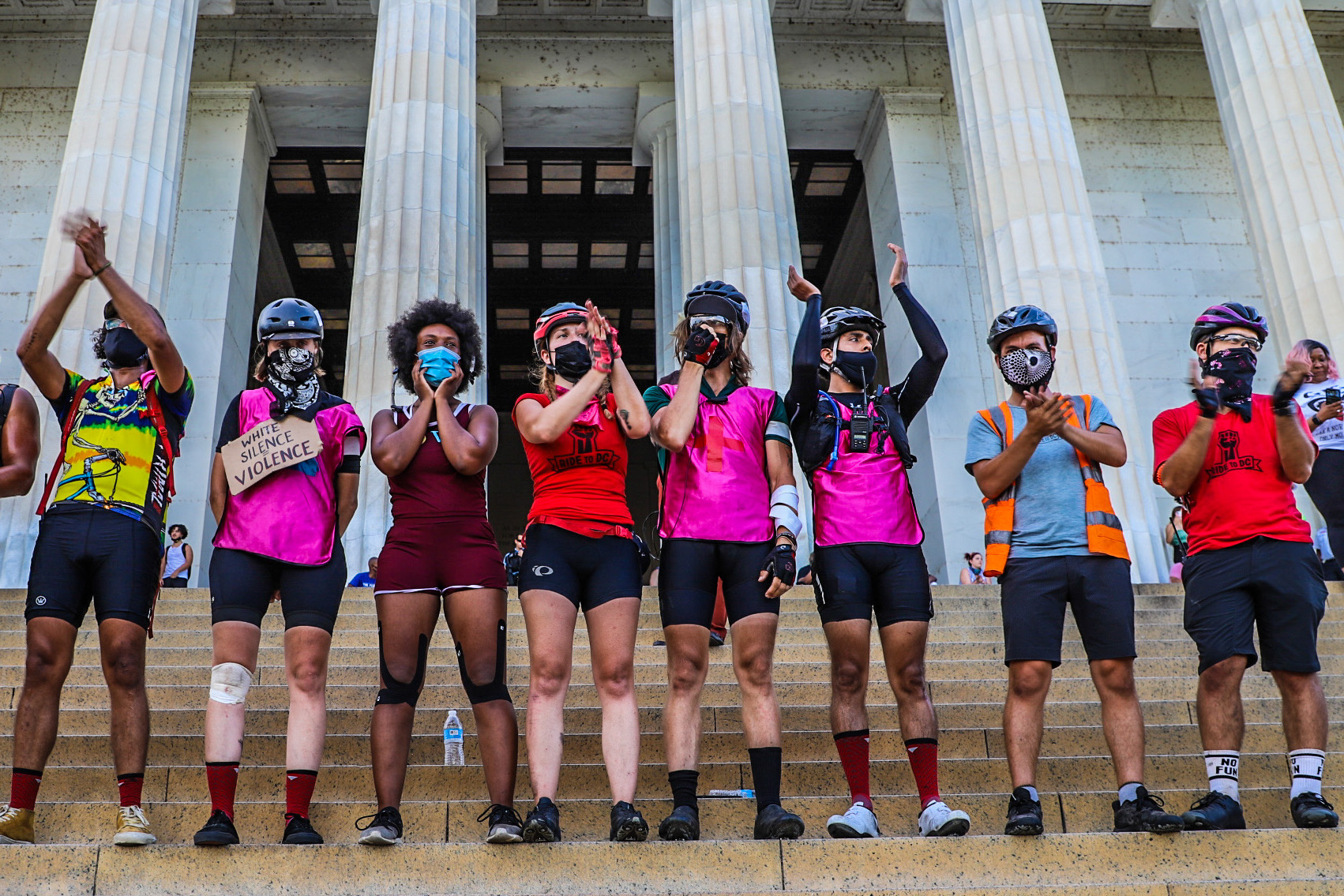 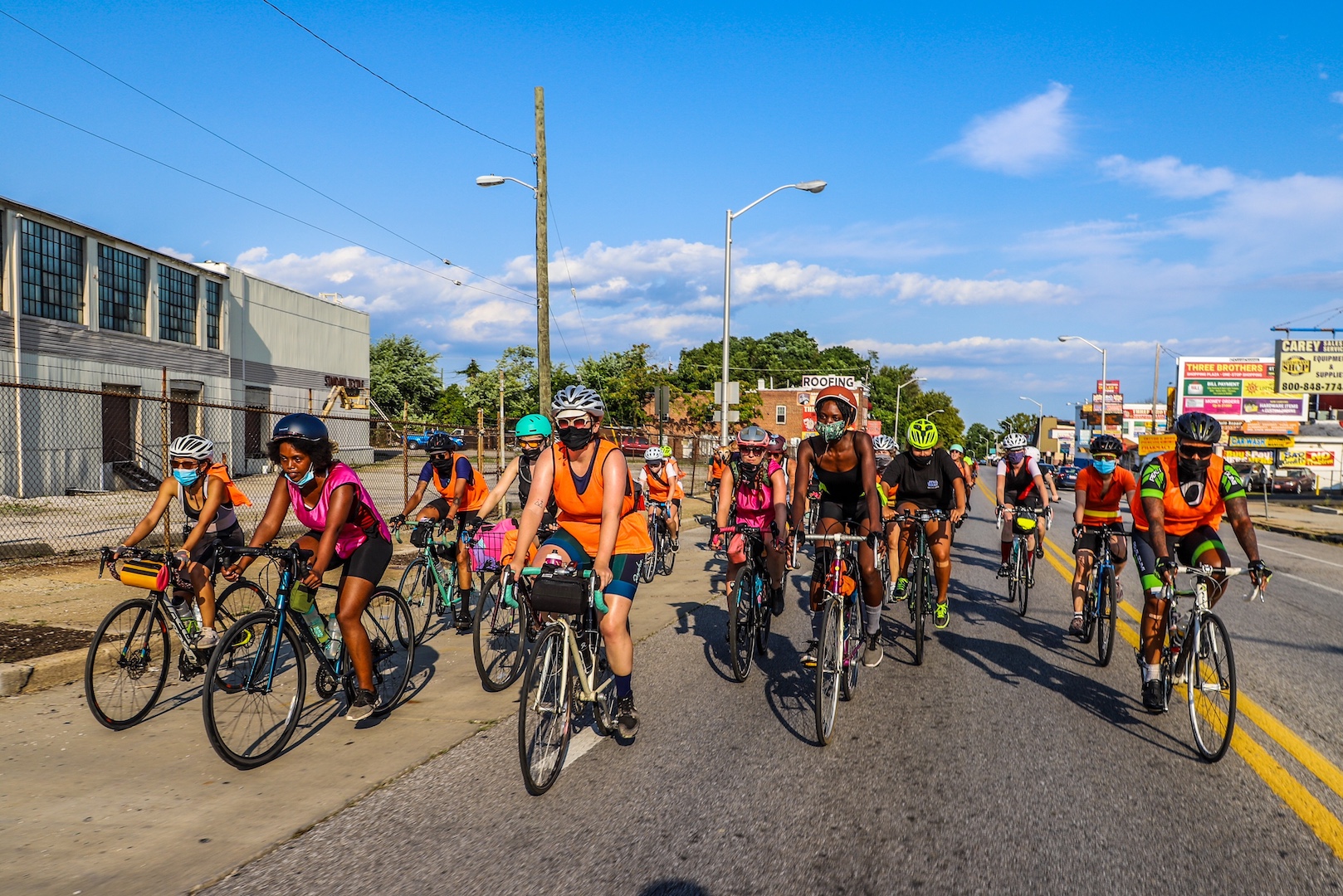 Find out more about Ride to DC on their official website.

Linkedin
RELATED ARTICLES
OTHER ARTICLES
Following the release of their third album, the duo talk collaboration, family and connecting with the dead.
A new photo series documents tribes preserving the environment through simple, sustainable practices in central Asia.
The Egyptian government are continuing the repressive mistreatment of environmental campaigners.
Over the weekend, the United Families & Friends Campaign organised a protest calling for an end to deaths at the hands of the police.
A campaign led by ex-torture survivors and refugee organisations has left the Tories with no planes left to carry out their callous scheme.
Planet Ardbeg is a 40-page sci-fi anthology created by three cutting-edge artists.