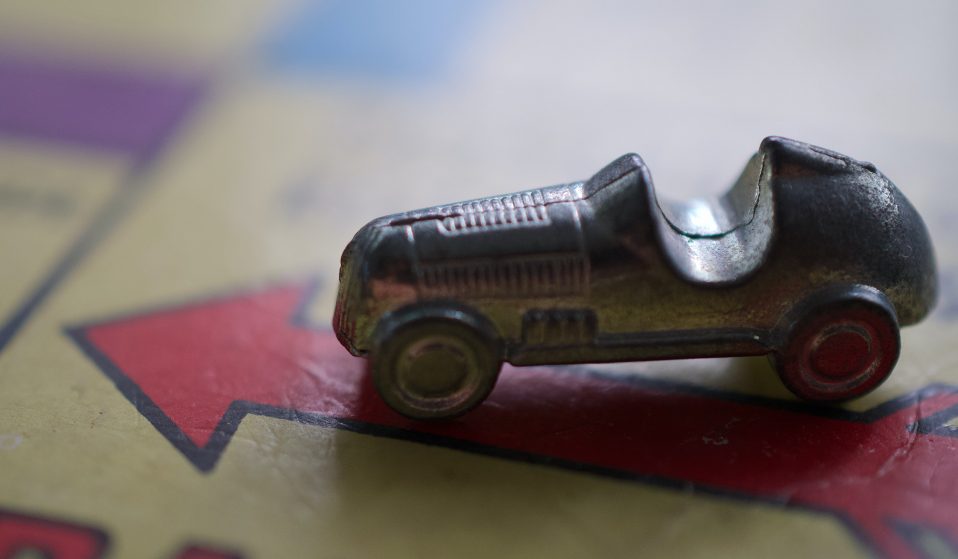 Greed, deceit, delight in the misfortune of others – Monopoly can bring out the worst in people. To some extent, that’s what it was designed to do. Belying its upbeat image and enduring global appeal, with millions of copies sold over the last 85 years, the backstory to the world’s most popular board game is not as simple as it once seemed.

Starting with Elizabeth Magie’s ‘The Landlord’s Game’, which was patented in 1904, Monopoly gradually evolved over the next three decades. A feminist and passionate advocate of Henry George’s single tax theory, Magie’s game aimed to teach players about the rampant inequalities caused by property ownership. Over time that message was lost, and her role in creating Monopoly was deliberately obscured. Only recently has that started to change.

Most people have heard a rather different story about how Monopoly was created. When Parker Brothers acquired the rights to the game in 1935, they helped to propagate the myth that it was the brainchild of Charles Darrow. Struggling during the Great Depression, it was said that he had invented Monopoly in his basement, thereby lifting his family out of poverty. The story was considered more inspiring and palatable than the truth.

In reality, Magie’s game had been passed between friends and spread by word of mouth. Many of the people who played The Landlord’s Game even influenced its development with ideas like fixed prices and localised property names. It gained traction amongst students, left-wing families and Quaker communities, but never achieved popular appeal.

Many versions of ‘the monopoly game’, as it became known, were then in circulation and Darrow set about formalising the rules and refining the appearance of the one he was introduced to. It became a great success, cementing his status as Monopoly’s sole creator. Although she fought for recognition, Magie and her game were largely forgotten.

As Mary Pilon, the author of The Monopolists: Obsession, Fury and the Scandal Behind the World’s Favorite Board Game, explains: “The idea that a man invented it in the Great Depression was still very much the dominant narrative and, for a lot of people, why would you even question that? It’s the thing that you’d been told by your parents, grandparents or great-grandparents. It was really heavily marketed for a long, long time.”

“I think one of the reasons the Darrow story has stayed with us, particularly in the United States, is that we love the lightbulb myth. We love the idea that we could go in our basement and ‘poof’, think of something, and become rich and famous off of it.”

Pilon – whose work has helped to revive Magie’s story in recent years – noted the significance of a man claiming all the credit for Monopoly. Her readers did too. “One of the groups that really seem to connect with the book are women in tech and women in engineering. I spend most of my time writing about sports in a very male-dominated field, so it’s been interesting to see this story, which to me felt very niche, get this bigger audience,” she says.

“This isn’t just about Lizzie Magie. There are countless women throughout history who contribute these incredible things and are literally written out of the story. As I was working on the book, I was grateful that we had the evidence. Because the role of unpaid female labour, particularly in the United States over time, is just massive and wildly underreported and undersold.”

But without the idiosyncratic economics professor Ralph Anspach, Magie might have faded without trace. “He created this game called ‘Anti-Monopoly’ in the early 1970s,” says Pilon. “He gets a letter from Parker Brothers saying, ‘You can’t infringe on our trademark.’ That kind of catapults him into this big research project. ‘Where did this game come from? How can a company have a monopoly on Monopoly?’ Ralph is a really fascinating guy. A lot of us, if we got a cease and desist letter from a big company, we’d probably be terrified and stop. That’s not who he is. He’s a fighter.”

Anti-Monopoly evoked the spirit of The Landlord’s Game, which had two sets of rules. There was a monopolist and an anti-monopolist version, with the former clearly catching the public’s imagination. Anspach eventually won his case and retained the right to not only produce his game, but also speak publicly about what he’d found.

He proved to be an invaluable resource for Pilon when she stumbled on the subject by accident while writing an article about the financial crisis for The Wall Street Journal in 2009. She jokes that her book was the product of a fact-checking exercise that simply got out of hand.

With the mechanics of Monopoly well-honed over many years of development, it became a multi-generational hit and a staple of popular culture. The game is sold in more than 100 countries. Hundreds of special editions have been produced, based around cities, sports team, TV shows and film franchises. Recent variations have included ‘Monopoly: Cheaters Edition’ and ‘Monopoly For Sore Losers’, reflecting how many choose to play.

In addition to the contentious origins of the game, Kevin Tostado’s 2010 documentary Under The Boardwalk: The Monopoly Story explored its global popularity and burgeoning tournament scene. He acknowledges that Hasbro, who acquired Parker Brothers in 1991, have a vested interest in promoting the Darrow myth – “I think they like the concept of a rags to riches story,” he says.

In a sense, that’s the very fantasy sold by Monopoly. Originally intended to elucidate the injustices of capitalism, for some it has achieved the opposite, becoming a celebration of wealth and a win-at-all-costs mentality. Deal-making, the pursuit of riches and relentless acquisition make it something of an allegory for the American dream. It can also be a form of wish-fulfilment for people with little hope of buying property of their own.

Monopoly had always been a feature of Tostado’s life, and he took part in a few tournaments while working on his documentary, to get an insight into the mindset of competitive players. Under the Boardwalk follows the 2009 World Championships through to their conclusion, with 19-year-old Norwegian student Bjørn Halvard Knappskog becoming the youngest ever winner.

“Much like any niche you have people who obsess over the game and take it almost too seriously,” says Tostado. “There is a lot of game theory involved with it. The dice and luck are always going to be a part of the game, but your personal strategies and your ability to pit your opponents against each other and try to position yourself as a favourable trading partner is one of the strongest components of being a successful player.”

From avid collectors to fierce competitors, Tostado encountered Monopoly enthusiasts of all stripes. A few themes emerged: “There were quite a lot of lawyers, teachers and people in the financial industry who played Monopoly. With lawyers, it’s the same kind of skillset in terms of an interpersonal ability to negotiate or try and spin a set of facts to be in their favour.”

As a software developer, Natalie Fitzsimons, the reigning UK and Ireland Monopoly champion, doesn’t fit into any of these categories. Unlike many of the passionate obsessives that tournament play attracts, she took a distinctly casual approach. Fitzsimons had recently bought her husband a copy of the Marvel edition of Monopoly and they’d been playing together. She entered them both in the Northern Ireland heats for fun and ended up winning.

“My husband’s quite competitive. I’m really not… I didn’t intend or expect to win ever,” she laughs.

Buoyed by her success, Fitzsimons kept going. In July 2015, she won the national title at the finals in London, claiming a trophy and a place at the World Championships being held in Macau later that year. She embraced the social side of the competition and her approach clearly worked as she finished sixth out of 28 players.

“Monopoly relies on two parts: logic and working with others,” says Fitzsimons. “There are times when they need to make a decision to trade or not to trade and that can make or break it for you. Having built that friendship with people made it a little bit easier to do trades and come out with good results.”

Fitzsimons, like Pilon and Tostado, has fond childhood memories of Monopoly and continues to enjoy playing. Although competing in tournaments has given her a renewed appreciation of the game, she still likes settling down for a game with friends and family most of all. For all its fraught history and anti-capitalist roots, it remains a fun break from real life for millions of people.

“You’re going into this different realm. It’s not real life; it’s a Monopoly game,” says Pilon. “The gloves come off, so to speak. My grandmother, who is 93 and a tiny, sweet, church-going lady, will be cutthroat when she plays Monopoly.”

“That’s what I think is so fun about playing games with people,” continues Pilon. “You see this other side of who they are, including who cheats.”

Linkedin
RELATED ARTICLES
OTHER ARTICLES
In her new book, the author explores the country’s housing crisis in human terms and calls for radical action to address a broken system.
Photographer Arthur Grace recalls travelling through the Soviet Bloc and finding ways to evade the surveillance of his work.
A new edition of a seminal book brings together iconic images of the band onstage in their full glory and backstage in moments of unguarded camaraderie.
In the latest instalment of Photographers in Conversation, the chronicler of raves, protests and beyond explains why he’s drawn to such specifically visceral environments.
Proposals to introduce a minimum GCSE threshold for student loans will disproportionately affect those from marginalised backgrounds.
The author discusses the all-consuming nature of heartbreak, and turning the experience into an incisive exploration of love and loss.