Outdoor / Sport / Wrestling’s LGBTQ stars are fighting for their future 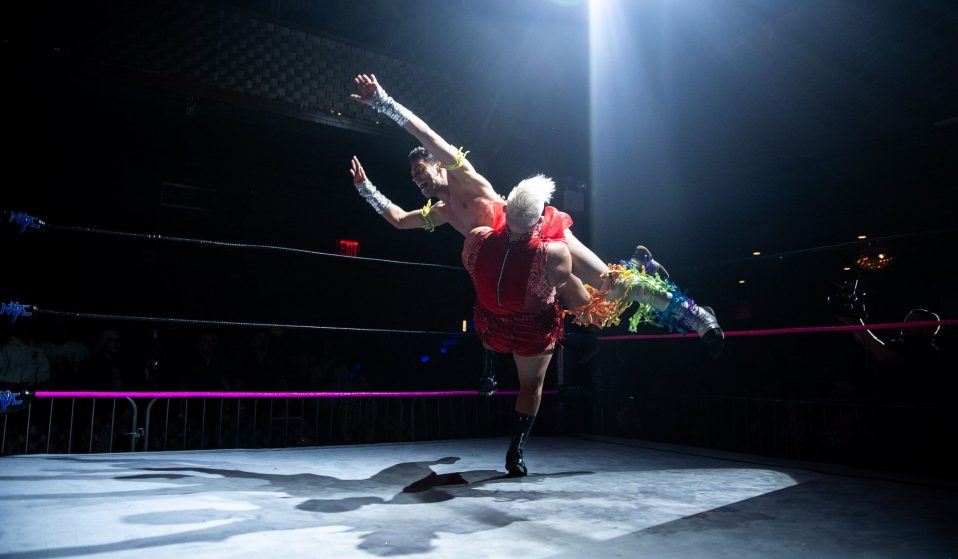 A Matter of Pride is helping queer wrestlers make their mark in an industry that has for so long treated them as a punchline.

A Matter of Pride is helping LGBTQ+ wrestlers make their mark in an industry that has for so long treated them as a punchline. Jake Hall meets the queer stars of the squared circle.

To describe A Matter of Pride Wrestling, the world’s first regular LGBTQ pro wrestling event, as unconventional would be an understatement. Over the last few months alone, shows have featured ‘big gay street fights’, ‘yes daddy matches’ and a live wedding between Vinny Pacifico and his drag bride – and A Matter of Pride founder – Rick Cataldo, who was caught having sex with three men backstage just moments before the ceremony.

This chaos is standard practice. The last live event, which took place in Rhode Island, New York, ended with the debut of CoCo Mousse, an enigmatic glamazon who bulldozed through the main event and decimated the company’s biggest stars with her powder-pink wig still in tact. Earlier in the night, the crowd cheered as wrestler Tyler Klein was stripped to a hot pink thong by Corinne Mink while another star, Billy Dixon, was inexplicably ‘fired’ on the spot by a power-hungry Rick.

“My character has seen a series of reinventions throughout my 15 years in the industry,” Rick tells me when we catch up weeks after the show, “but one thing stays true; I’m a bitch.”

As a seasoned pro, Rick’s glamour and charisma propel A Matter of Pride’s shows, which rely on a mixture of campy storylines, innovative match formats and strong, technical wrestling. Not all of the wrestlers are part of the LGBTQ+ community, but the vast majority are – and those who aren’t are steadfast allies.

“For a staggering ten years, I was the only one of my kind: an openly gay wrestler who presented a feminine character,” he explains, “Every ‘flamboyant’ gimmick that preceded me was performed by straight men, with the sole intent of getting over by making a mockery of what was, at the time, a hidden community.” 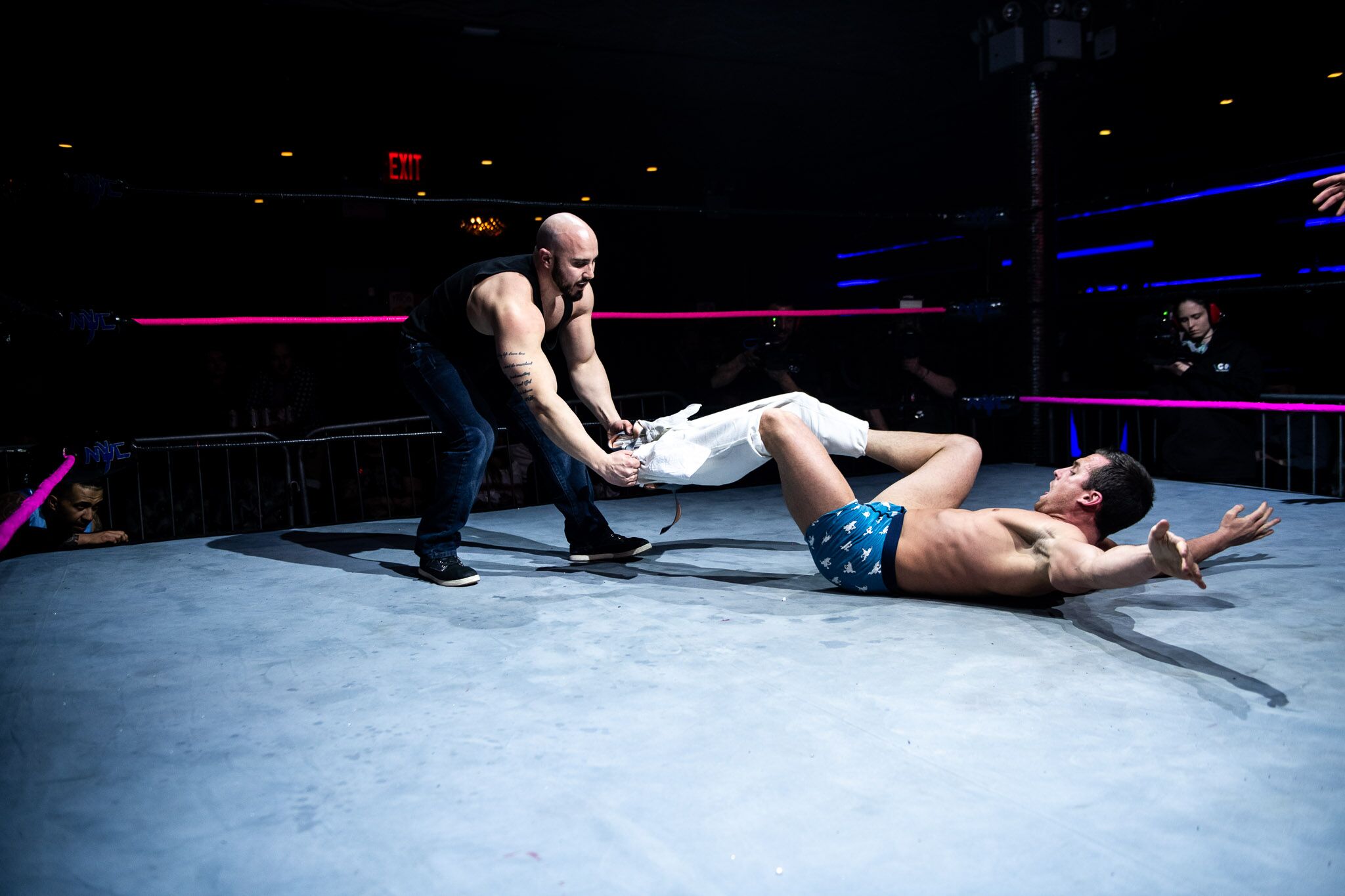 Although high-profile wrestlers like Pat Patterson and Orlando Jordan in the WWE, America’s world-famous wrestling company, were gay, their sexuality was never really mentioned – at least until Pat competed in an ‘Evening Gown Match’, which saw him wrestle comedically in a floor-length gown.

Instead the WWE’s chequered history has been full of characters like Goldust, whose nickname was literally ‘The Bizarre One’. With his gold face paint, wig and bodysuit, he would freak his opponents out with sexually suggestive moves and even lick their faces. The queer overtones were heavy, but they arguably weren’t in good faith.

“There was really nothing to help you navigate nor aspire to become an openly queer wrestler presenting an unapologetically gay character.” According to Rick. But as the years went by, he came across more wrestlers like him: Jamie Senegal, Eddy McQueen and Sonny Kiss. Bonded by their experiences of navigating the industry as openly queer athletes, they formed a makeshift collective with Rick as the matriarch.

“I didn’t want them to go through the suffering I endured. Even as society becomes more progressive, the wrestling world is built on this secret society spearheaded by this white, cisgender, frat-boy, chauvinist mentality,” he tells me. Suddenly galvanised, he laid the foundations for what we now know as A Matter of Pride. “There are no real superstars now, and that’s why I love building this movement. It’s about using wrestling as a medium to tell queer stories from queer perspectives.”

Despite being formed just two years ago, the company already has the support of veteran WWE stars like Terri Runnels and Melina, a former Women’s Champion. Rick doesn’t just work with US wrestlers, either. Through social media, he’s been able to recruit wrestlers from around the world to star in his shows. 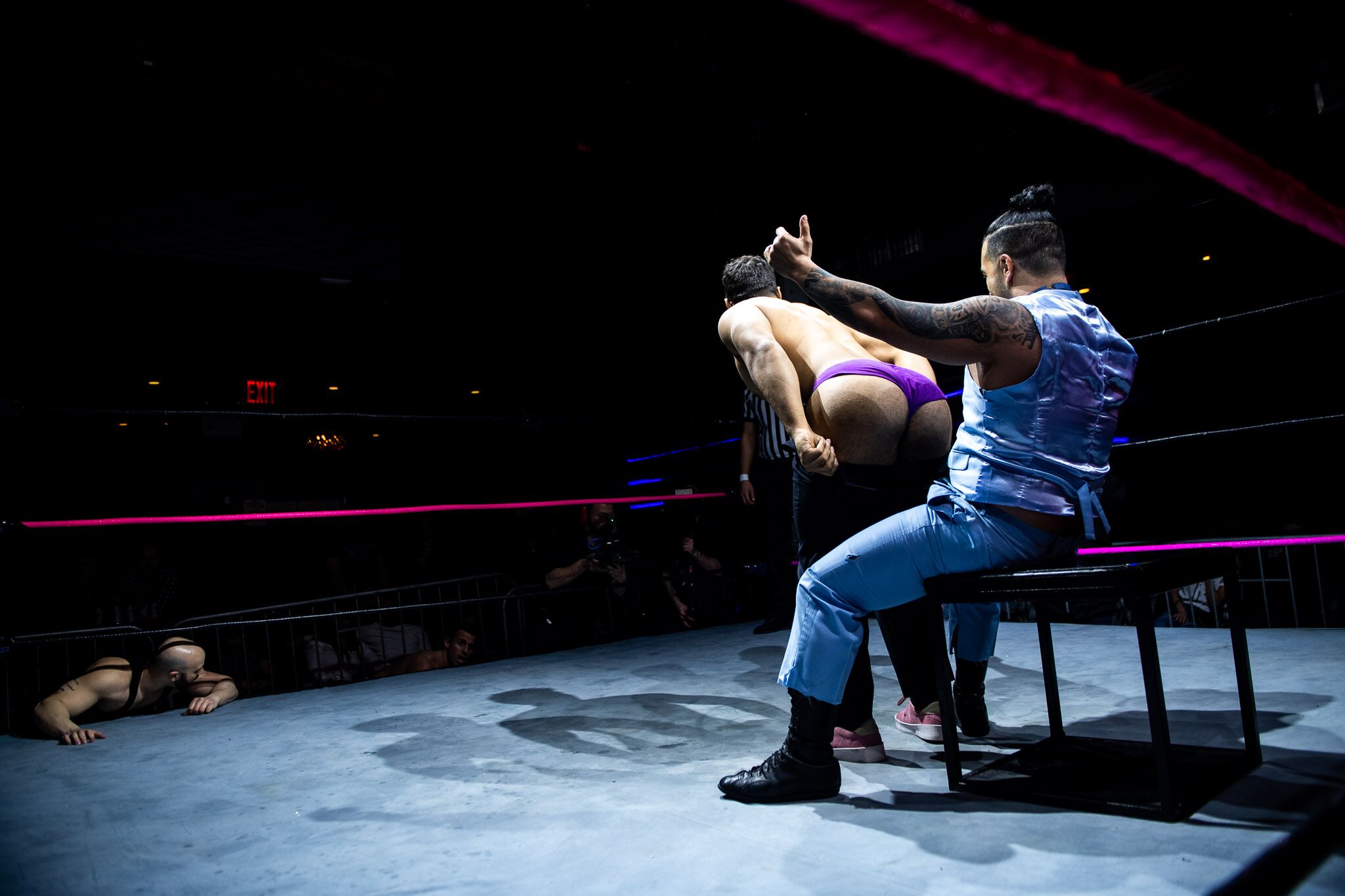 UK wrestler Cassius, The Neon Explosion is just one of these stars. After years of training at London’s School of Lucha Libre – a famously inclusive school he says has changed his life – he earned a reputation for himself as one of the country’s most impressive stars, racking up a series of title wins at Lucha Britannia.

Earlier this year, he found himself in New York wrestling for A Matter of Pride. “It was exciting, because we had all met on Instagram,” he says of the other wrestlers on the bill when we meet in an East London pub. “We were all doing similar things, but in such different ways. Do you know the episode of Buffy The Vampire Slayer, when she finds out there are other slayers around the world? It was like that.”

Wrestlers like Goldust never inspired him because, as a young gay wrestling fan he could sense their personas were disingenuous. Cassius says he gravitated towards strong women wrestlers, “they taught me that you could be feminine without being weak,” he explained. Funnily enough, “when I’m in the ring I ask myself, ‘What Would Buffy Do?’” He laughs.

Cassius had begun wrestling training at 17 years old, when he wasn’t openly gay. After years of being teased and told to repress his femininity he found himself monitoring everything from his walk to his mannerisms. “With wrestling you have to be thick-skinned, and I just wasn’t,” he says and before long he decided to step away from the sport.

Years later, he stumbled upon the School of Lucha Libre and trainers who saw he was a natural entertainer. “They could see I was effeminate, so they would encourage me to embrace it,” he explains. “I knew deep down that I wanted to be that sparkly character, but I was always too scared.”

Ultimately, all it took was a costume change to switch his mentality for good: “Pink hot-pants changed my life. I remember it felt like such a big deal to try them on, but as soon as I walked through that curtain I felt like this was what I should have been wearing all along.”

Now, he embraces his femininity. Although he’s a technically brilliant high-flyer capable of top rope moves, Cassius’ persona is what sets him apart. A signature move involves slut-dropping to avoid a punch then coming back up for a slap. Before he delivers his trademark DDT he twerks. He’s camp, but on his own terms. 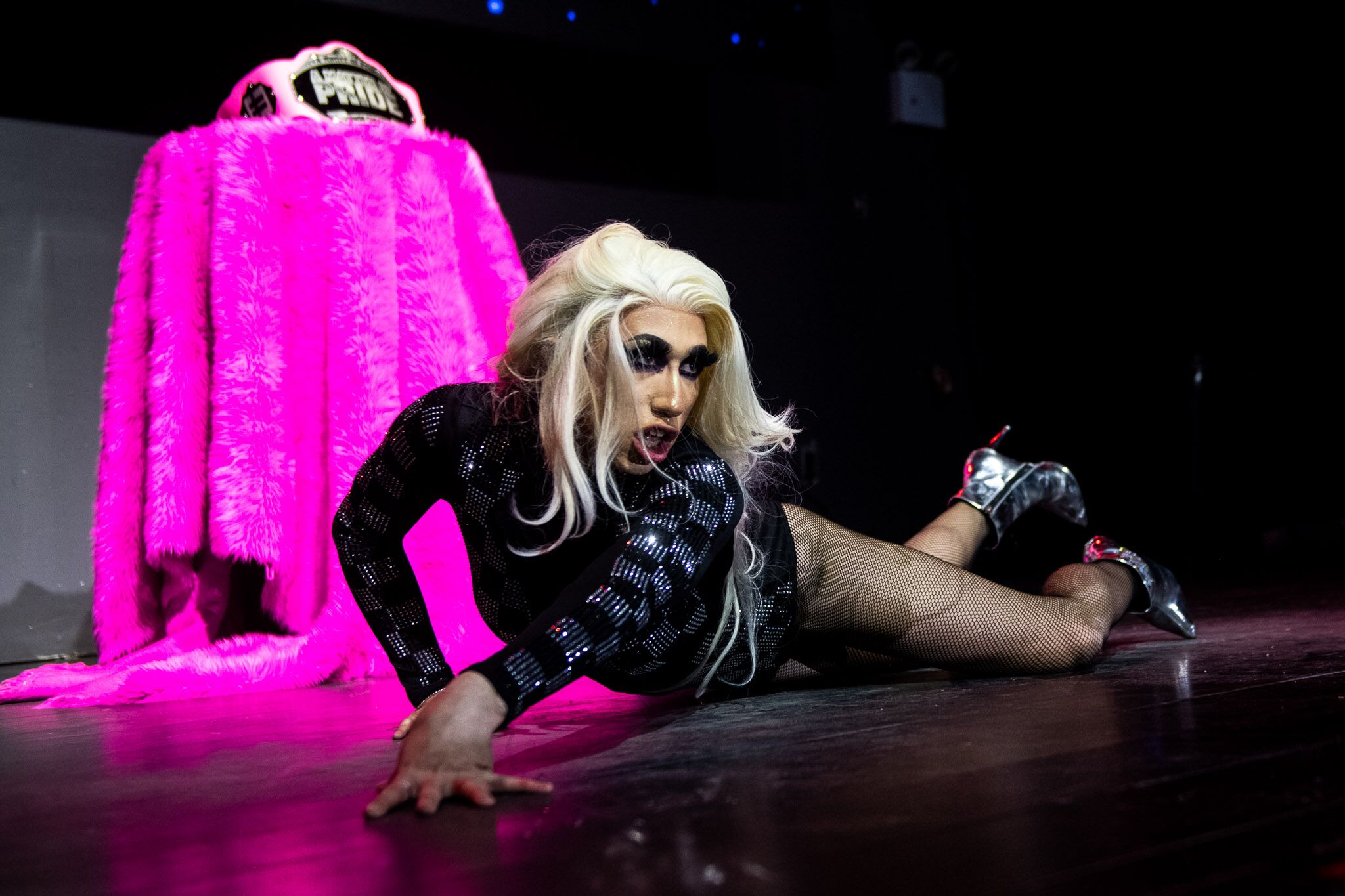 In his eyes, the British wrestling circuit is more accepting than its global counterparts but things are moving in the right direction. In Japan, DDT Wrestling has its own queer hero in the form of Danshoku Dino, a multiple title winner and an established icon. While Cassandro and the Mexican éxoticos, in other words drag luchadors, have been paving the way for progressive representation. Intergender matches are also growing in popularity across indie circuits worldwide, and wrestlers like Rebel Kinney – who calls herself ‘The Psycho Dyke’ – and openly trans superstar Nyla Rose are proving there’s a shift towards spotlighting talented women from the LGBT+ community as well.

“Sometimes there’s this feeling amongst LGBT+ wrestlers that there’s only one slot, and we’re all fighting for it,” Cassius explains of the toll that the historic lack of representation has taken on the community, “but A Matter of Pride proves that isn’t true, it shows that there’s room for all of us.”

Linkedin
RELATED ARTICLES
OTHER ARTICLES
Activists and campaigners are fighting back against new laws that would seriously undermine the ability to take industrial action, calling it an attack on fundamental workers' rights.
A new exhibitions brings together the work of photographers who documented the deep unrest of these pivotal decades.
As she gears up for the release of her first book, the 24-year-old climate activist talks standing up to authority and building a more inclusive movement.
Since 2007, Gideon Mendel has made 20 trips to document floods in 13 countries. The result is an alarming record of what has already been lost to the climate emergency.
AI companies that develop image-generators using copyrighted artwork from the internet are coming under fire from artists who say that it amounts to theft.
After building his reputation covering the US civil rights movement in the 1960s, the photographer went on to produce some of the most enduring images of the past century.