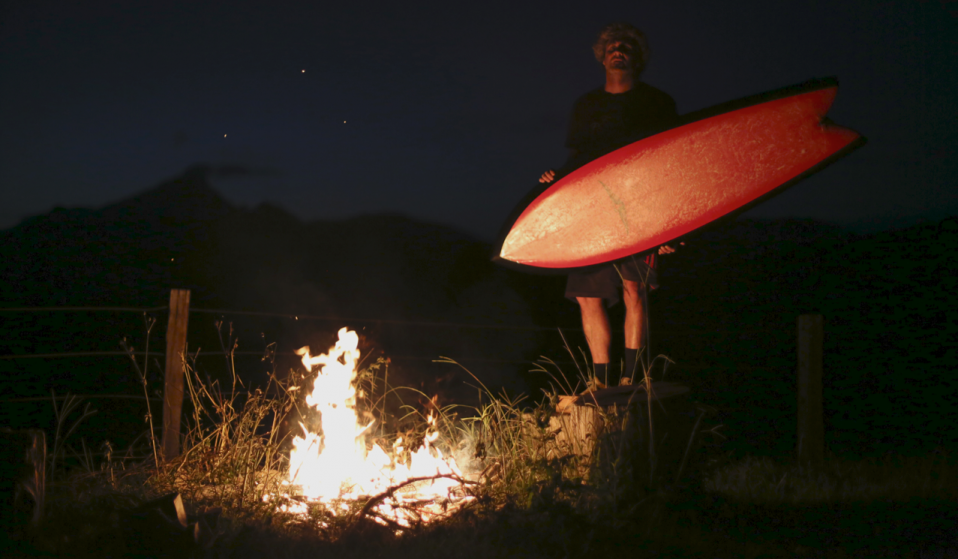 A nostalgic exploration of the relationship between (wo)man and sea.

A nostalgic exploration of the relationship between (wo)man and sea.

There is something pleasantly disorienting about a conversation with Andrew Kidman. At different points you become convinced that he is either a living link to surfing’s past, or a bushy-haired prophet from its future. Spend long enough picking his brain and it becomes unclear if there is even a difference between the two.

Kidman has carved out a unique niche as one of the great idea-men of modern surfing. Although he describes himself as an artist, his creative output is eclectic in the extreme, running from photography and music to surfboard shaping, printmaking and book publishing. He is perhaps most widely known for his movies, like the 1996 masterpiece Litmus, which helped end the cookie-cutter era of commercialised surfing on homogeneous shapes and was one of the kickstarters of an aesthetic revolution in board design that’s still reverberating today. If pre-kidman surf culture was all about being as gnarly as possible on a surfboard shaped for someone much more talented than you, post-Kidman surf culture was suddenly more grown up, less neon and more earth-toned, conscious for the first time that ‘progression’ could mean a number of different things – none of which particularly mattered very much as long as you were enjoying yourself. After Litmus, a generation of surfers began to dig a wider field of aesthetic reference – one that could borrow readily from past eras without taking a step back.

“All this stuff has happened before,” says Kidman, referring to the various, sometimes competing periods of craftsmanship and commercialism through which surfboard shaping has passed. ”New people are always coming into surfing thinking they can make a shit load of money selling boards if they can mass-produce them. So they invest all this money into an idea that is fundamentally futile because every single person surfs differently. If you really want to get the right board for you, you have to customise it. You can’t just go in and get a board that Kelly Slater rides or that Dane Reynolds rides.”

We’re sitting in an upscale hotel in San Sebastian. Kidman is here to promote his new film, Spirit of Akasha – a remake of Morning of the Earth, a film that perfectly encapsulated the hippie zeitgeist of the 1970s surf avant-garde which Kidman has updated with the help of original director Alby Falzon. With its beautiful saturations, hand-wrought single-fins and country vibe, Falzon’s 1971 classic marks the defining moment when surfing’s first boom-time generation tuned out, turned on, grew its hair and began experimenting with new surfboard designs.

Growing up surfing around the Sydney suburb of Narrabeen, the importance of self-sufficiency and craftsmanship was instilled in Kidman from a young age. “As a kid, my dad told me that the only way I was going to get a new surfboard was if I made it myself,” he says. “That was horrifying to me. I was already getting hassled for wearing board shorts that my mom had sewn herself. But he took me down to [surfboard shaper] Barry Bennett’s and bought me a blank, a tin of fibreglass resin and fins and we made a board. As hard as that was, it must have sowed some sort of seed. I still make my own boards.”
Kidman’s real genius lies in his ability to combine the eye of a dreamer with the mind of a pragmatist. This is evident in his filmmaking, which he describes as “capturing the feeling of whatever is going on and then presenting it as it is.”

What is going on right now in surfing, according to Kidman, has little to do with fifty-foot Teahupoo or inverted air 360s. Instead, long sections of Spirit of Akasha feature the unknown, non-professional Korean surfer Sam Yoon, who Kidman met while surfing one of the many obscure big-wave spots that dot the east coast of Australia. He is about as far from ‘high performance’ as you will see in a modern surf film. “People always pursue the performance aspect of surfing,” says Kidman. “It’s exciting, but it dates so quickly.”

The timelessness of surfing crops up frequently in Spirit of Akasha, from Yoon’s Waimea wave watch to Stephanie Gilmore’s long, playful Greenmount barrels. There’s a fair bit of paddling and wiping out, too. “If you look at old movies from the 1970s, they understood how intrinsic the whole paddle-out-wipe-out cycle is to surfing,” he says. “That’s what surfing is about to me. It’s a one-on-one experience between you and the sea. It’s not about anyone else.”
The man-and-sea relationship is taken to its logical extreme in the last section of the film featuring gigantic waves in Ireland shot by British lensman Mickey Smith. “Something about the camaraderie and loneliness of cold water, and probably of Ireland, felt similar to what Indonesia was for those guys back in the days of Morning of the Earth,” he says. “It was a total juxtaposition of water colours and physical experiences to Indonesia, but it was still about guys just going out there as friends and experiencing something. I think that’s where the purity of surfing lies.”

This idea of “purity” informs all of Kidman’s art – but it fits less neatly with industry agendas. Does he ever get disenchanted with the way surf culture has evolved as a commercial entity? “I’ve spent a lot of time around folk that are disenchanted,” he says. “I’ve had my moments I can assure you. But I just find so much joy in the sea, no matter the situation, that it overrides it. If it’s crowded I generally go in. It’s nobody’s fault that they want to go surfing, who could blame them? I’m just one of the crowd really.”

Find out more about Spirit of Akasha on the website.

Linkedin
RELATED ARTICLES
OTHER ARTICLES
Flat spells and freezing temperatures on the East Coast.
In a world where branded surf footage is amassing online, can the independent filmmaker still keep things DIY?
DIY surfing wants you to buck the system! But in the cold, hard, green light of day, can you teach a revolution that should be self-taught?