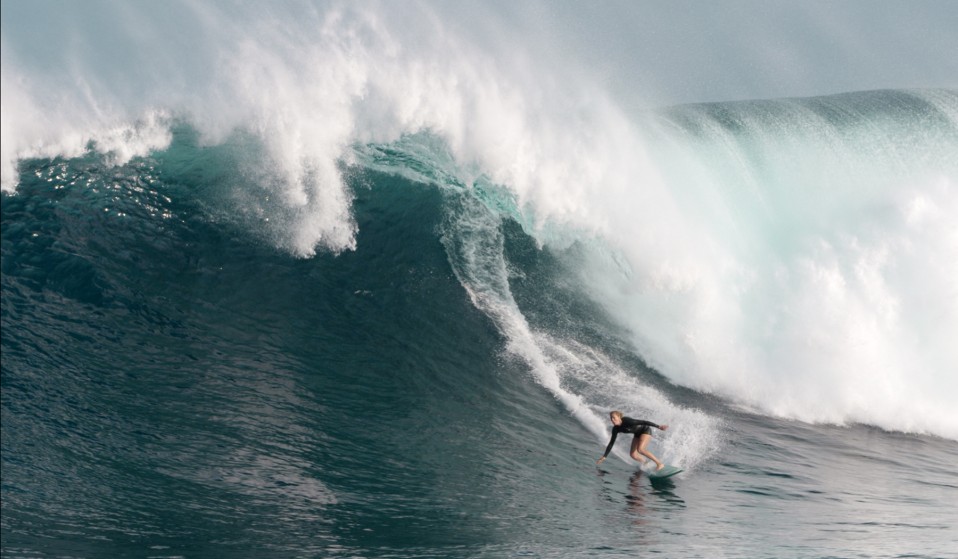 Paige Alms caught a killer barrel at Jaws, Hawaii this year and surfed her way into history. But she’s just getting started, she told Huck at the UK premiere of her documentary profile The Wave I Ride.

Paige Alms caught a killer barrel at Jaws, Hawaii this year and surfed her way into history. But she’s just getting started, she told Huck at the UK premiere of her documentary profile The Wave I Ride.

The epitome of surfing involves an athlete caught riding mid-barrel, instilling a sense of exhilaration and angst. The glory of a monster fifty-foot-plus wave enveloping a tiny rider, makes you stop and wonder; ‘Will they make it out?’ That is big wave surfing. It goes far deeper than someone carving or getting air off a two-footer.

This summer, Paige Alms paddled out and demonstrated what it’s all about at Jaws, Peahi in Hawaii – one of the biggest and most respected waves in surfing. Capitalising on being at the right position with pristine timing, Alms paddled her 9’4” custom board and dropped in to the wave of a lifetime, adapting to the curvature of the barrel and perfectly sailing through the tube. Time stood still as she exited to roaring applause.

“I got the best wave that any female paddle surfer has ever caught, and that was almost like a blessing from the universe,” reminisced Paige, with a beaming grin, as she showcased her documentary profile The Wave I Ride, at this year’s London Surf / Film Festival on its UK premiere.

“A full feature-length wasn’t the original plan”, admits Devyn Bisson, director of the inspiring and visually stunning documentary, which offers a personal glimpse of Paige’s big wave surfing career. It had originally started as a potential short film, which just kept evolving and expanding through avid Kickstarter funding and ultimately traced the most significant year, and wave, of Paige’s life.

Having grown up in Maui and surfing from nine years old, Paige soon realised that she was beating her elders and then it clicked, “Oh I can do this professionally?” It wasn’t until her mentor Chris Vandervoort dropped her with a 9’0 on an outer reef that she “got the big wave bug and hasn’t looked back since,” she told Huck.

Big wave surfers defy the huge risks of breaking waves, which are able to plunge surfers down 20-50 feet below the surface. When they get sucked under, the biggest challenges are trying to navigate which is up, avoiding ruptured eardrums and trying not to drown – all in the seconds before the next huge wave piles down on you. “It is who I am. I don’t feel like I am giving up things to be part of it,” says Paige. 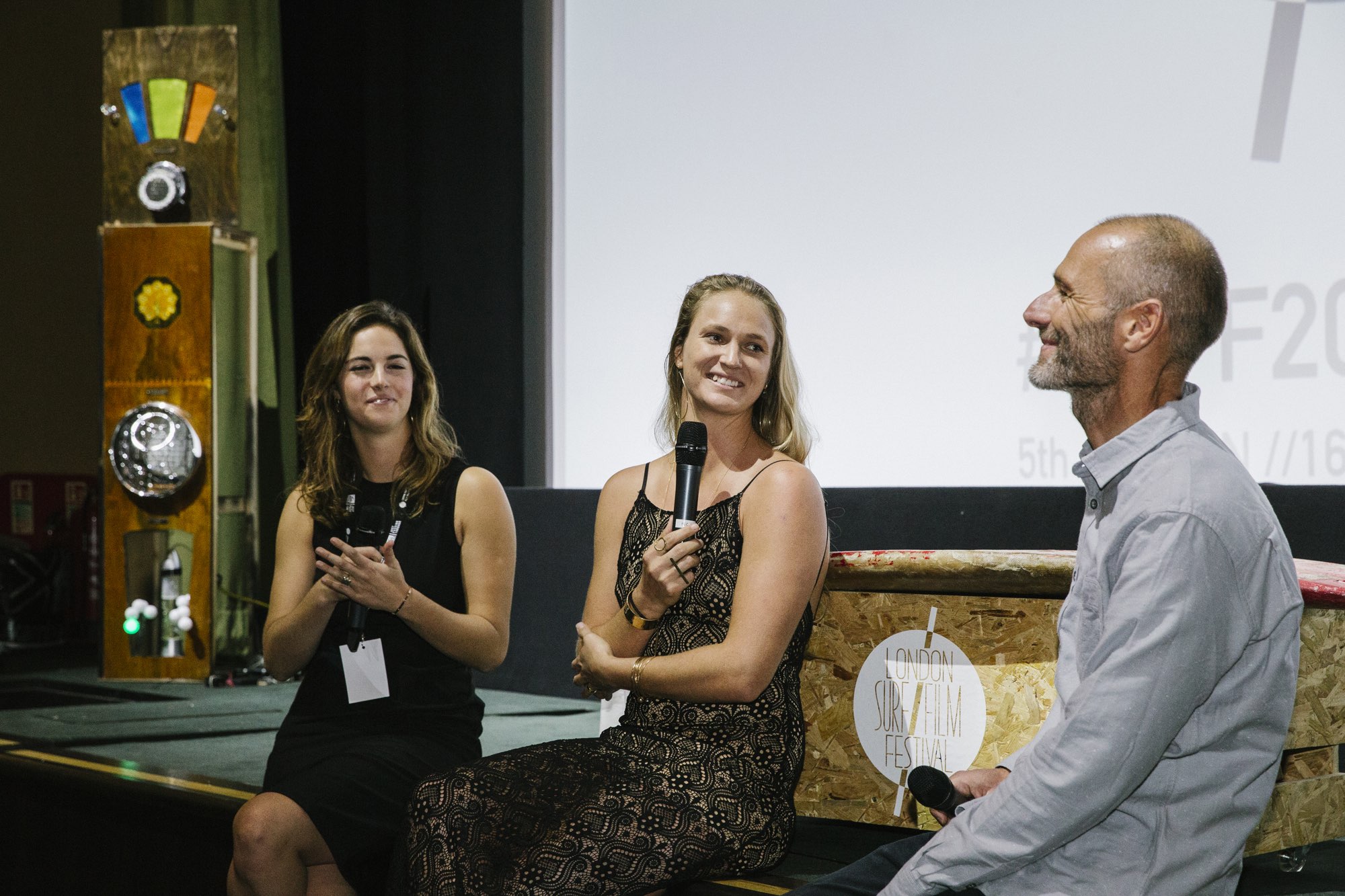 The opening minutes of The Wave I Ride document a monumental accident, her major wipeout in Mexico in 2013. “I thought I was invincible. It wasn’t something that I had been through before but it changed me. It really did,” Paige recalls. The magnitude of the swell crushed her shoulder, tearing it out of place. “It’s never a matter of if, it’s a matter of when,” Paige admits, and death at the hands of these behemoths is always close at hand. Her exasperated cries of agony caught on footage evoked silence throughout the LS / FF crowd at the sold-out Friday-night screening at Regent Street Cinema. “All of my confidence that I had, that I felt unbreakable, it just totally went out the door,” she explains. “It changed my life.”

Everyone gets injured, but athletes often suffer hardest. They all have a story that changes them. “It is cliché to say, but you do really come out of injuries stronger,” Paige says. “Like my friend Bethany Hamilton, who had her arm bitten off by a shark. The first couple days in the hospital she said she would never surf again, but that’s just the shock of it. She’s amazing, and still surfs better than most women on tour and she has a baby! That sort of stuff is so inspiring…” 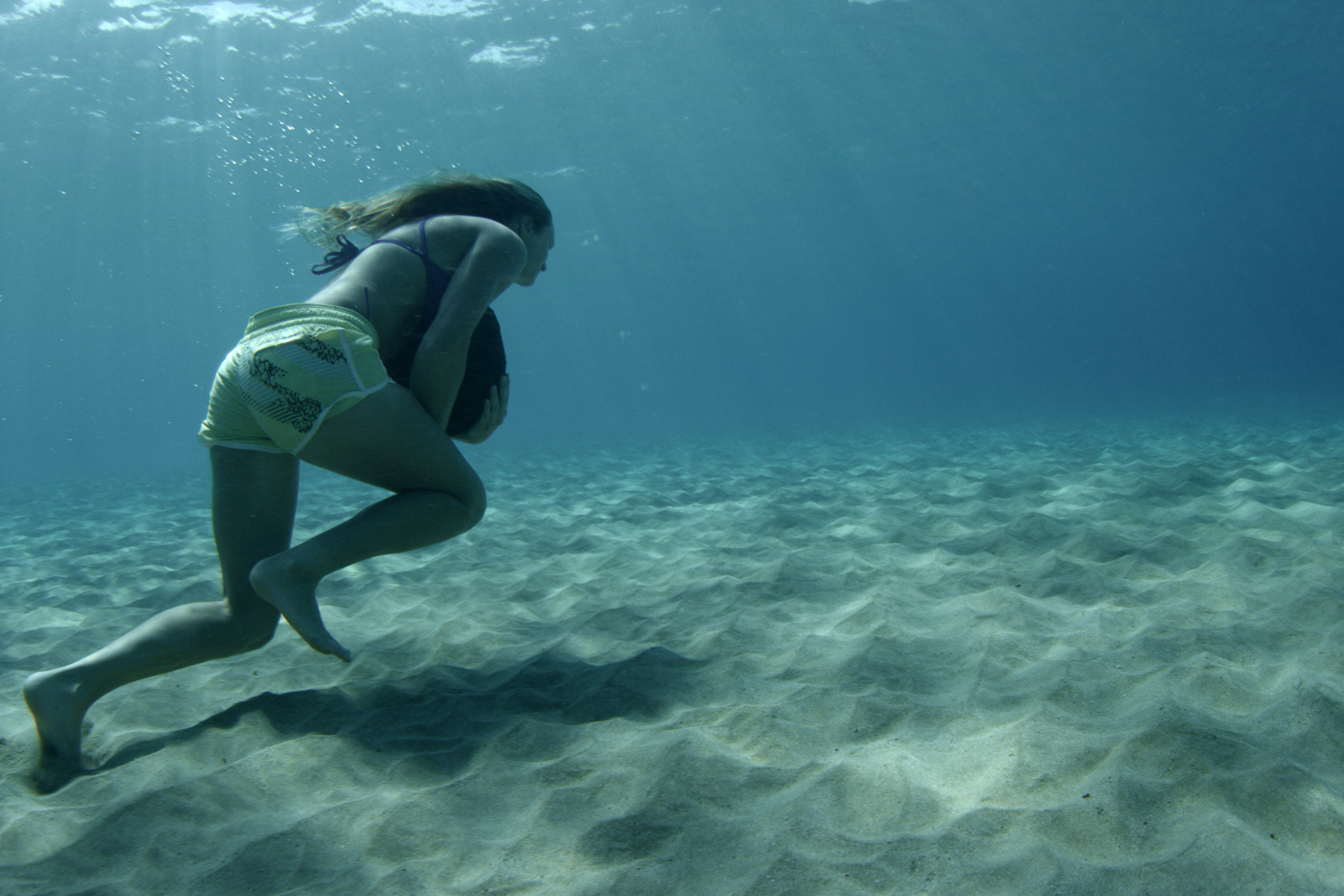 The Wave I Ride documents Paige’s courageous recovery which, beyond the physical healing, demanded a huge amount of mental strength as she fought to regain the confidence she lost, become strong again and make sure her head was in the right mind-space.

In the long-run, her wipeout just gave Paige a bigger incentive to push harder. “I would go through the whole process of being injured, in order to do what I am doing now.” With that, the ultimate Jaws wave fell into her palm, a mere year post accident, igniting a viral frenzy. Paige describers the beautiful timing as like Mother Nature saying. “Hey, I know you went through this and stuck with it, and you’re still going and here you go. This one’s for you.”

People began picking up on the female barrel phenomenon, bringing big wave surfing into the limelight – at long last. With only about a dozen girls focusing their attention on these mammoth waves, it’s a lot harder to convince sponsors that it’s something worth supporting. “We’re at the forefront of changing that,” Paige expresses in the documentary, alongside fellow big wave surfer Keala Kennelly.

“It’s about time that women’s voices are finally heard,” Paige explains. “There is no logical explanation for the male categories receiving winnings up to ten times larger than the women’s divisions.” Large sponsors are yet to support female big wave riders, choosing instead to throw their money behind the sexy, bikini-clad competitive surfers who willingly post Instagram snaps of their sandy, thong-wearing derrières. As Paige rightfully exclaims “Girls want to buy the cute bikini on a badass girl, doing badass shit whilst using it and not just wearing it!” Like dropping in on a 60ft wave. 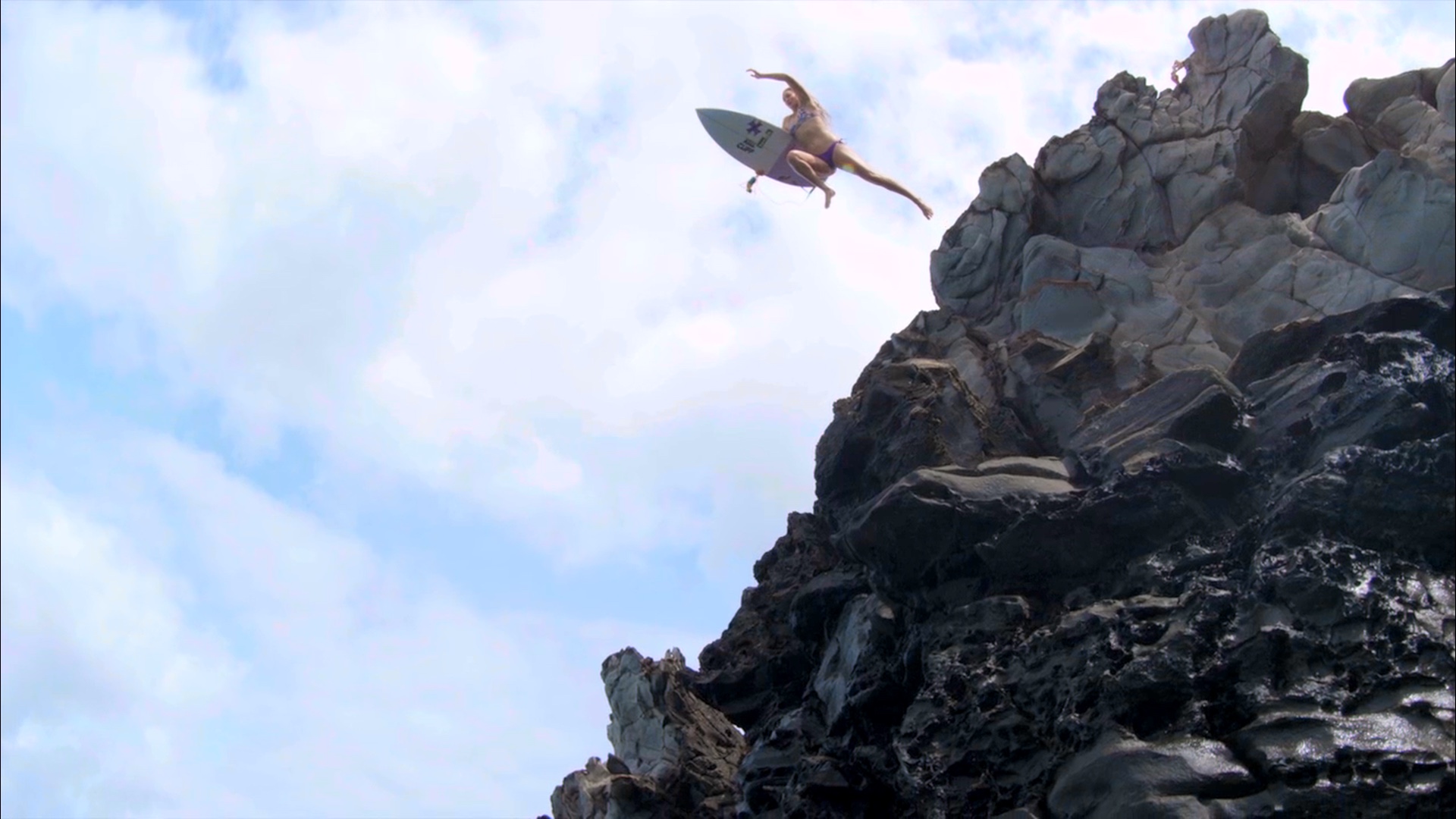 Still from The Wave I Ride

The Wave I Ride is an eye-opener to the captivating, high-risk world of a niche but growing branch of extremely talented female big wave surfers, who are breaking down barriers to pave the way for the next generation of girls.

For years, tennis legend Venus Williams protested for equal gender prize money and succeeded in 2007 at Wimbledon. This marked a change in gender imbalance in sport, yet there is still a long way to go in surfing and elsewhere. “Even Jamie Anderson doesn’t have a main sponsor and she’s a Snowboarding Gold Olympic Medalist and 4 times X Games Champion?!” Paige says, exasperated. “A lot of people are still fighting for that and not just in surfing.”

So what’s next for the woman who made surfing history this year? “Getting barrel at Jaws was always a very far-fetched goal” Paige discloses. “At the time it felt like it was not achievable… So now that I have kinda done that, it took a while for me to be like, ‘That happened.’ It was surreal, but it happened.” Now she’s focussing on using her time in the spotlight and the release of the The Wave I Ride to encourage young women interested in the exhilaration of big wave surfing. “I hope more women get involved in it,” she says. “By being a part of the beginning of it, I want to be the voice for making sure that things get done and change. As it’s about fucking time.”

Huck caught up with Paige at the London Surf / Film Festival, which held the UK premiere of The Wave I Ride on October 23.

Linkedin
RELATED ARTICLES
OTHER ARTICLES
Meg Handler’s photos capture diverse groups of New Yorkers coming together for the collective cause of civil rights.
Ireland’s national sports are modernising. At the forefront of this movement is Na Gaeil Aeracha, the country’s first ever queer GAA club.
The demonstration took place this week over plans to slash £50m from arts bodies in London.
Jack Lueders-Booth reflects on capturing the community that lived and worked along the city’s busiest railway route during the 1980s.
Photographer Nico Froehlich’s series documents South London’s diverse communities, while also reflecting on their fragility amid rapid gentrification.
Max Miechowski reflects on documenting land that is being lost to the sea – and the people who live life on the edge.